So, today is world naked gardening day but with the weather, I think we can give that a miss. Besides, I’d probably need to ask Alice to take the photo and I think that might traumatise her for life. We’ll see whether it makes it onto anyone else’s sixes. If you fancy taking part in Six on Saturday check the participant guide. The garden is filling with colour with the hot weather followed by the rain. I make no apologies for the mass photos.
1. Saxifrage

I have a few patches of saxifrage in pots. The white is ‘Pixie white’ and the red I think is ‘Peter Pan’. It has faded from the red it opens to a mixture of pink. They are getting a bit straggly. I could probably do with trying to save some seed and start them off again. Some of the pots would do with some more grit but I’m not about to pay delivery at the moment. 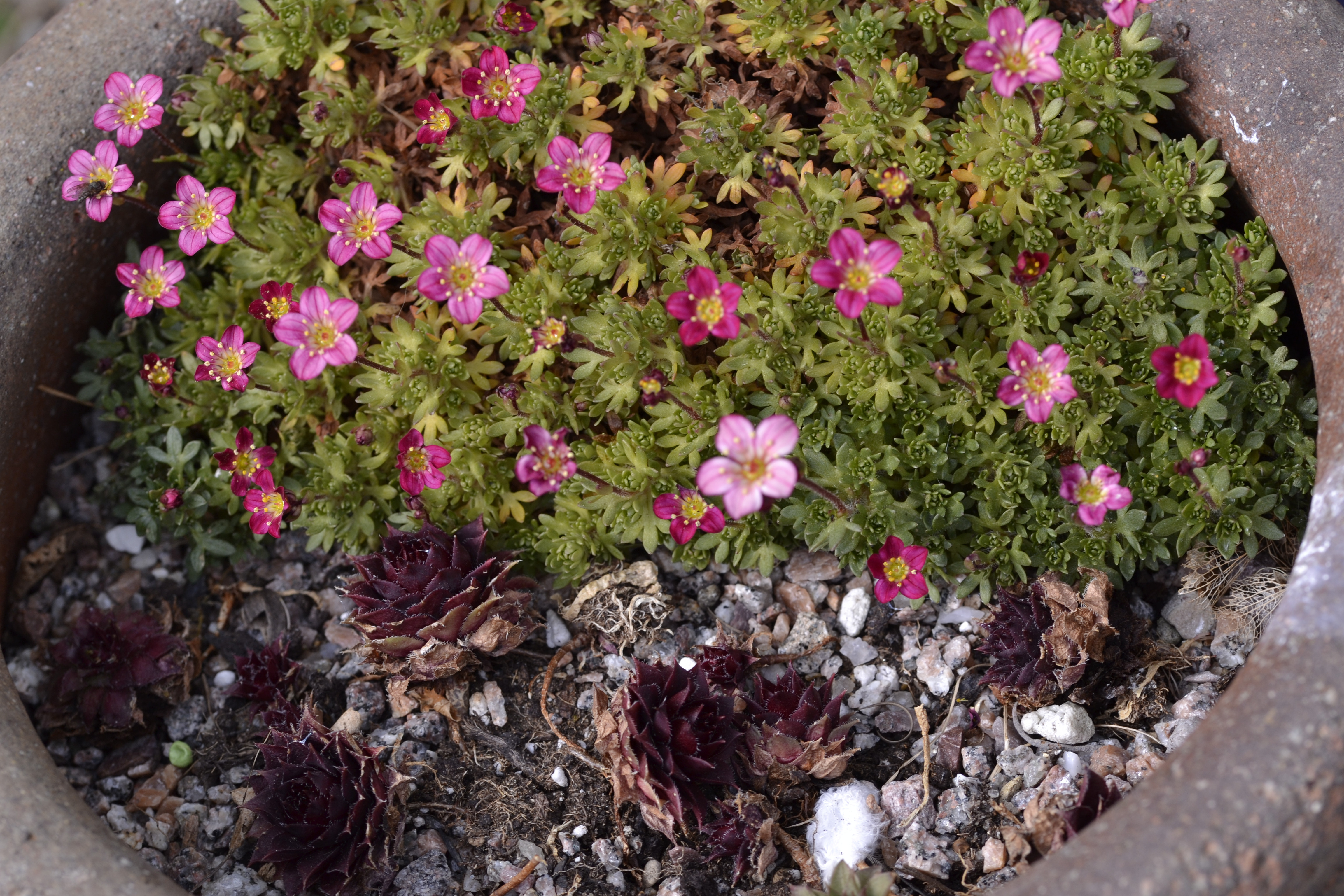 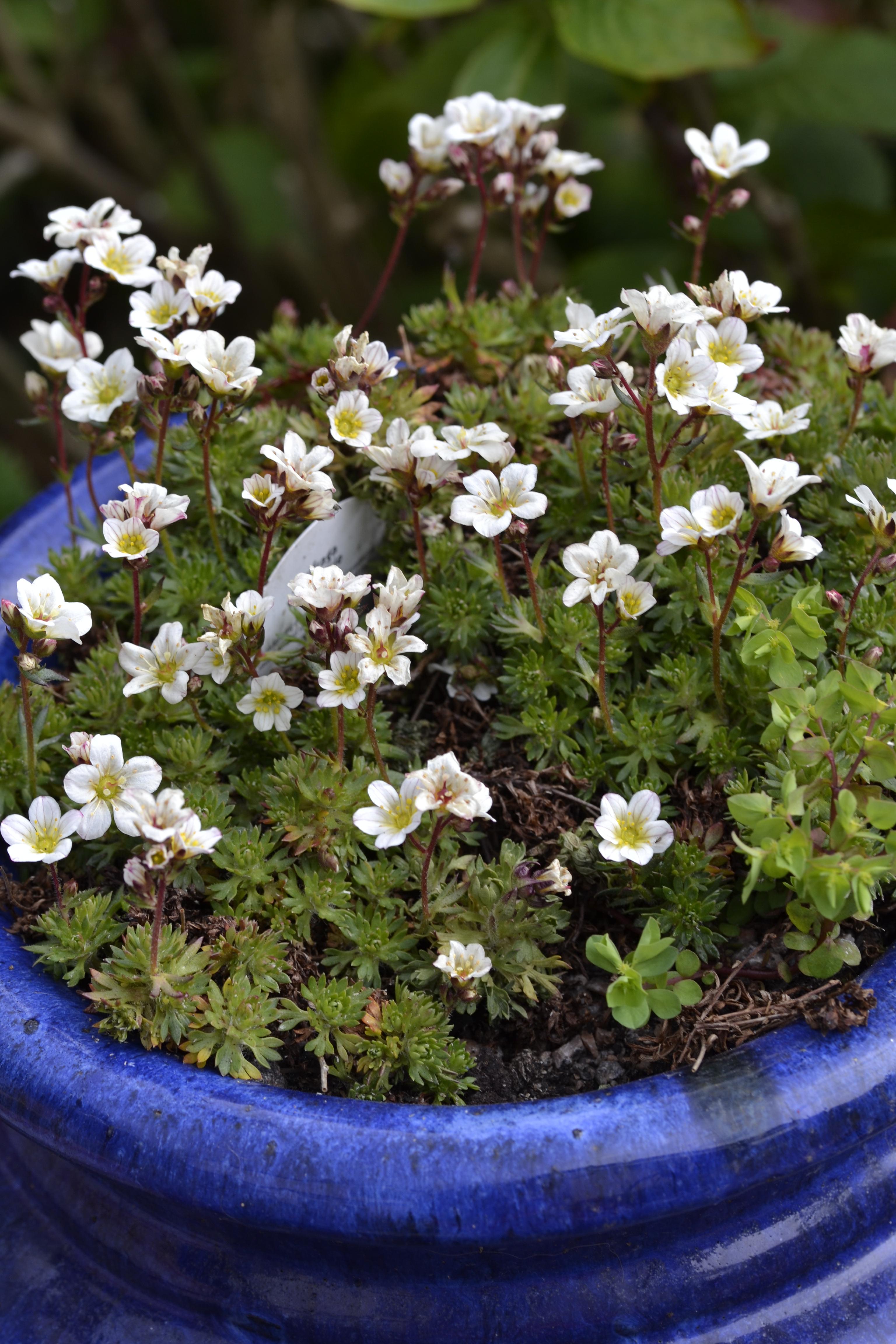 The plant formerly known as Dicentra. The pink bleeding heart is well established now. I divided a large section last year and I’ve now got bursts coming up along the border. It prefers shade but can tolerate sun if watered regularly. The bees have been visiting more often this year. 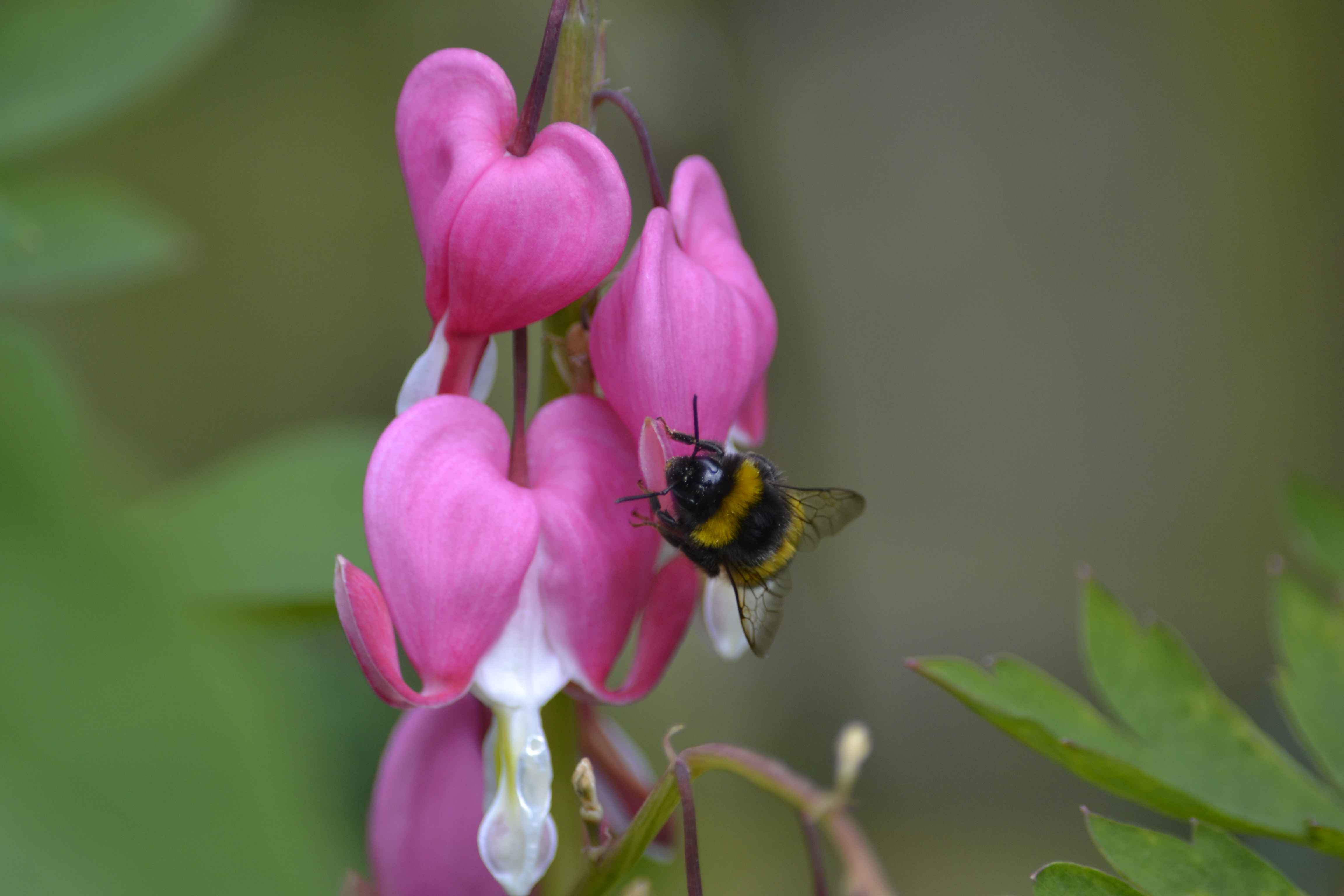 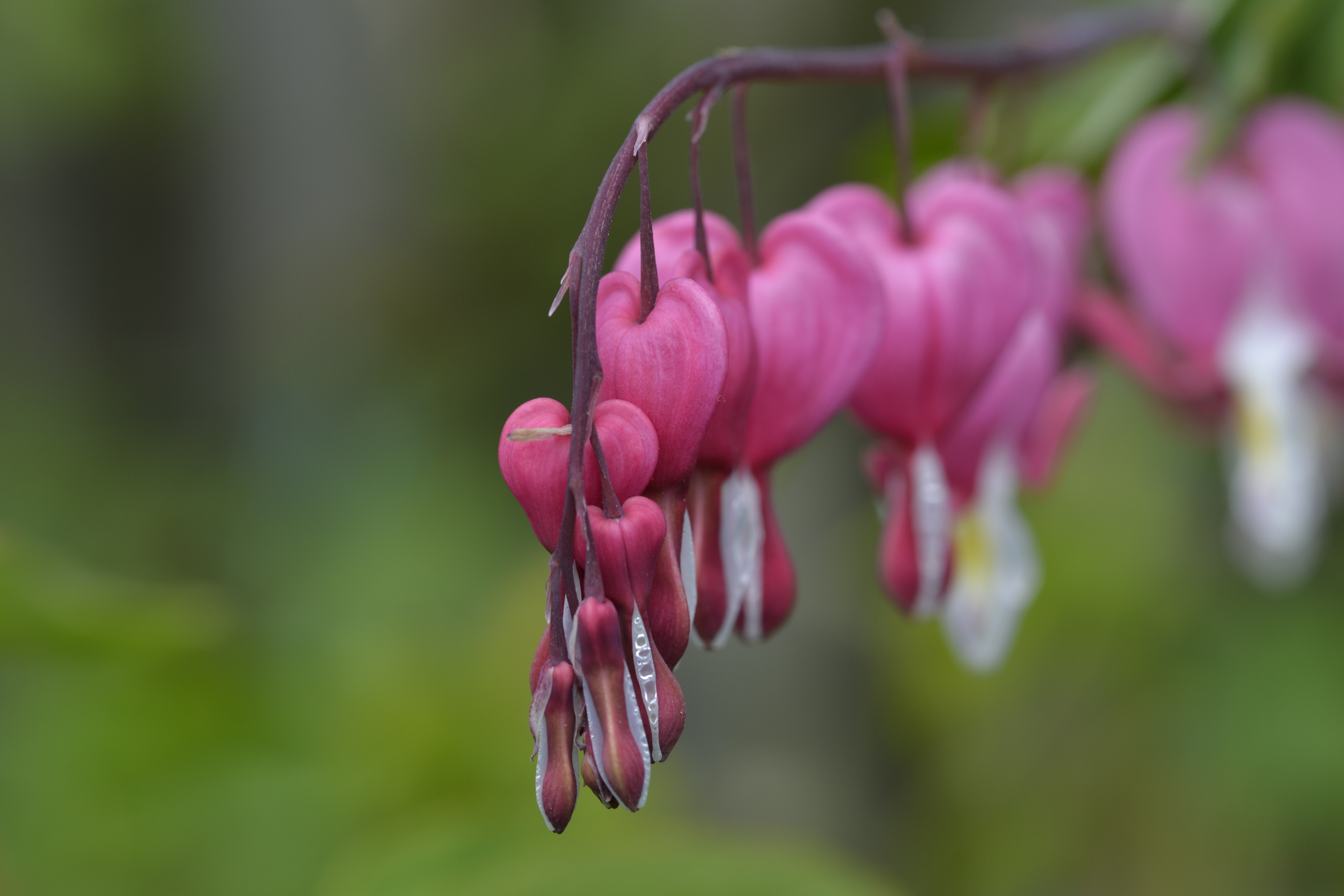 This patch of the ‘Alba’ variant’ is in the back garden in the shaded fern corner. I’ve got two establishing in the front garden amongst the ferns and hostas. They should carry on putting on growth each year until I can divide again. 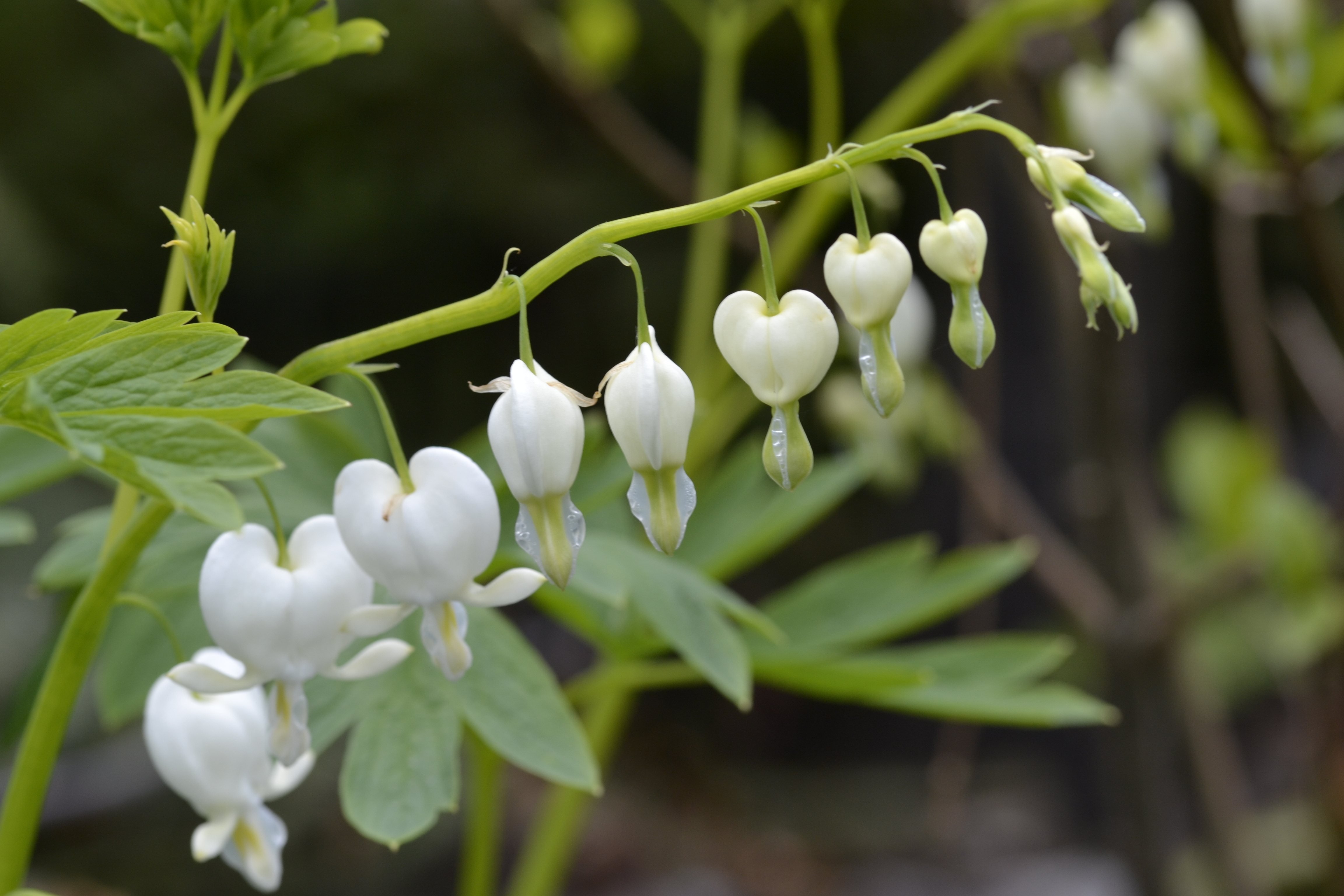 I particularly like the bleeding heart alongside tulips. The combination of the dark queen of the night with the pink hearts is always striking. 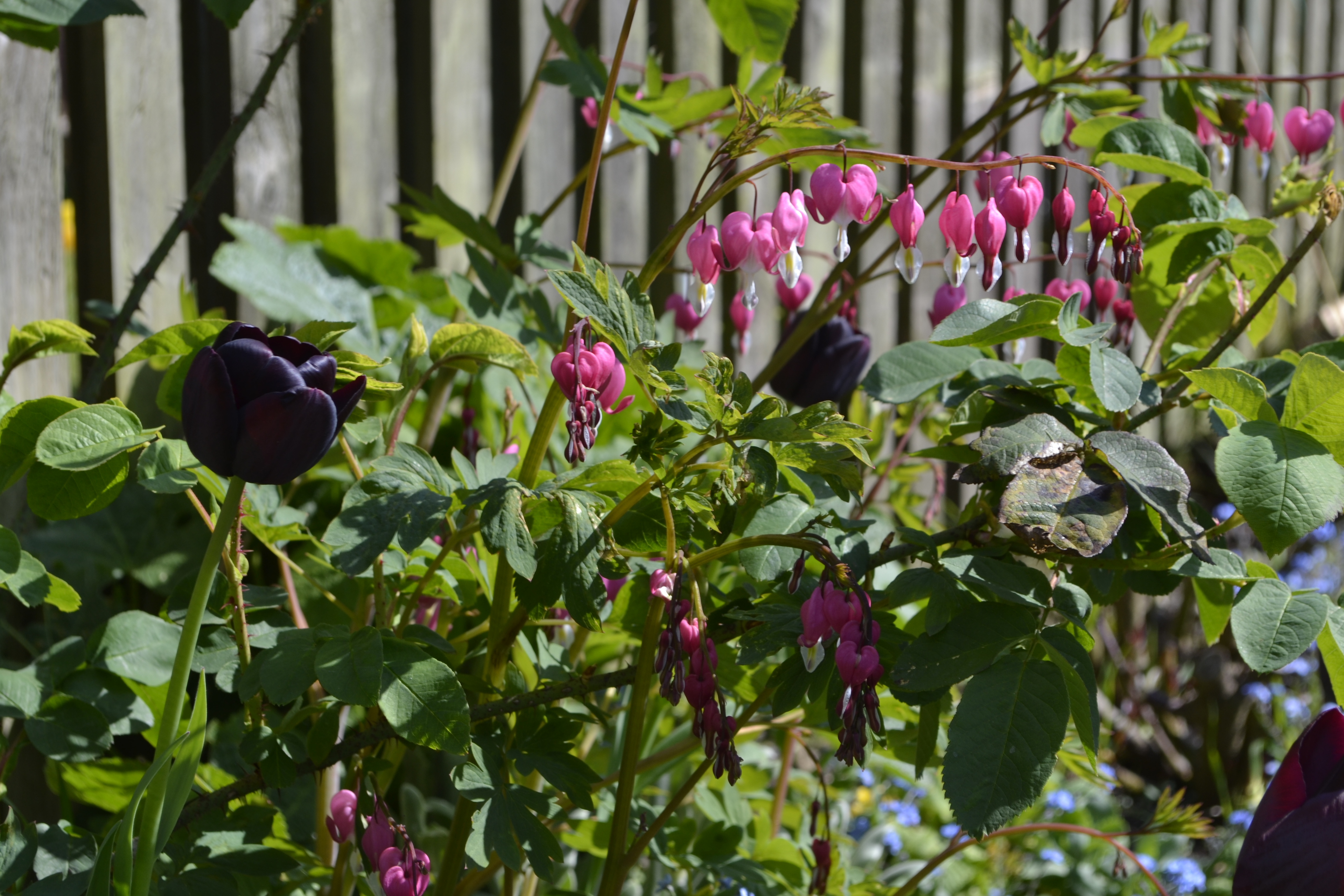 I’ve just got the one pot of these tulips. The white and purple stripes are very striking. The shape is nice and they’ve been long-lasting. They’ve been open for a couple of weeks and still looking good. 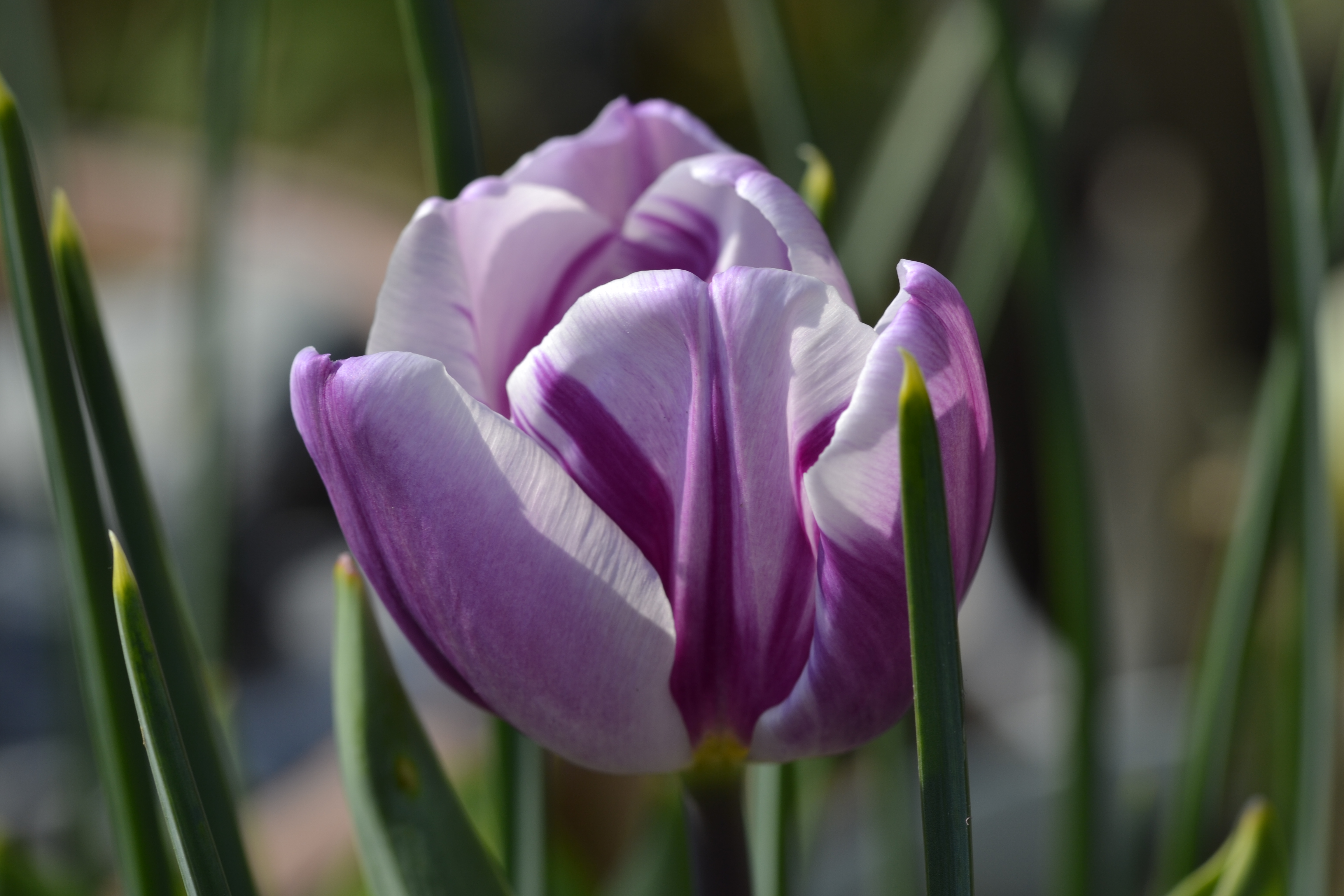 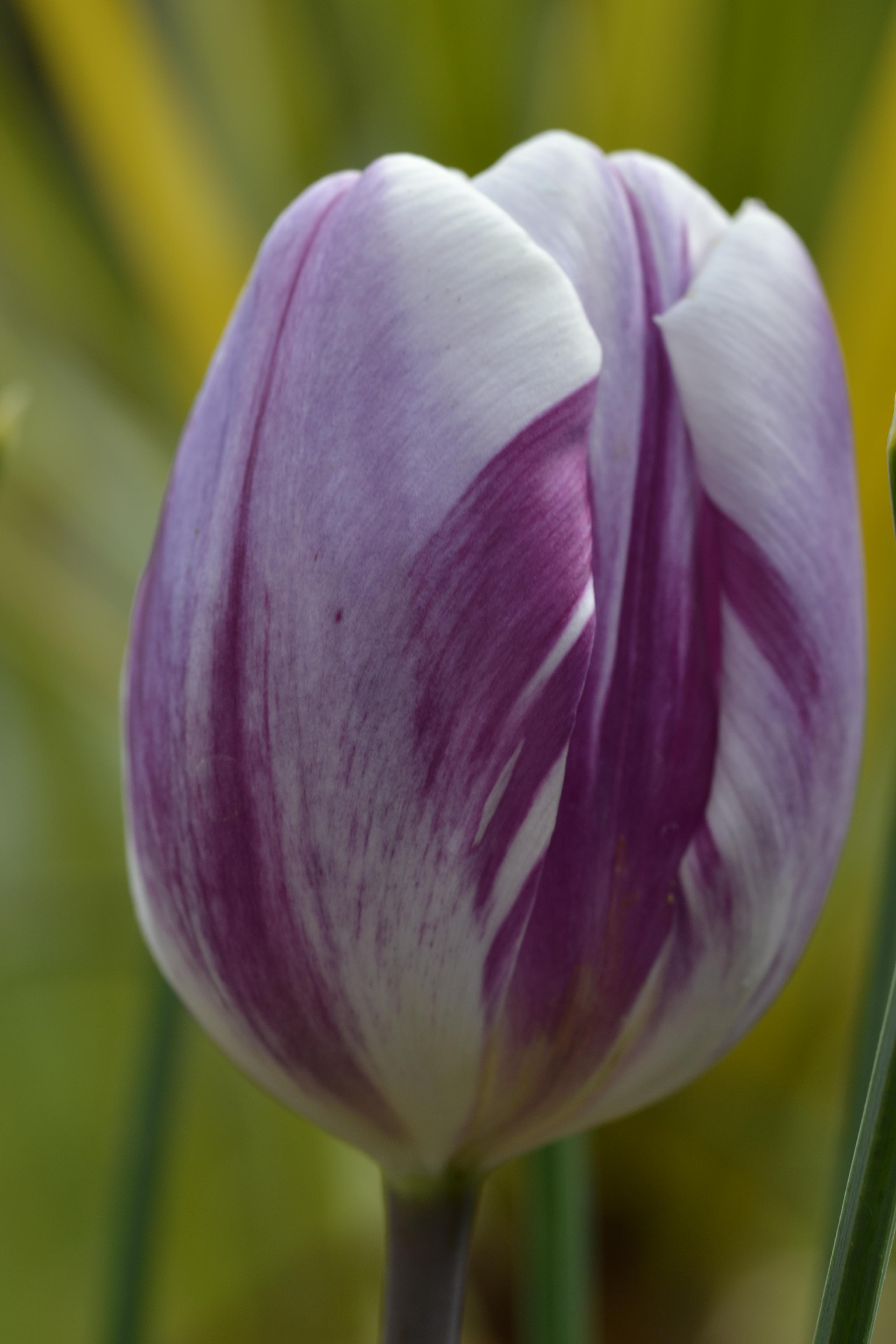 These were in a pot display a few years ago with Ophiogogon, ‘blackgrass’. I must have emptied these out at some point as I have this single parrot in the border. They are very striking tulips with the feathery petal edges. The rich dark colour means it is standing out on its own in a sea of ox-eye daisy foliage. 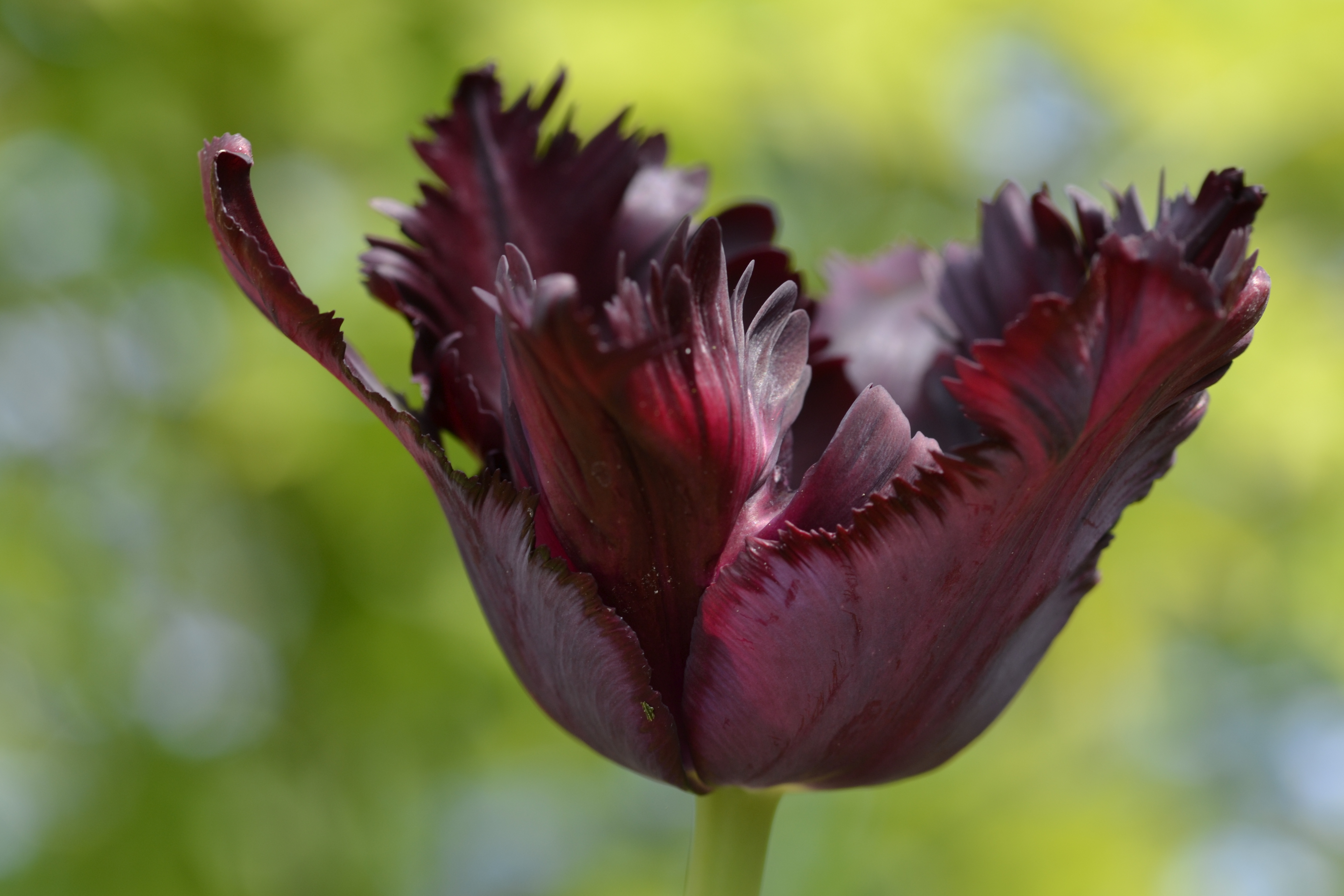 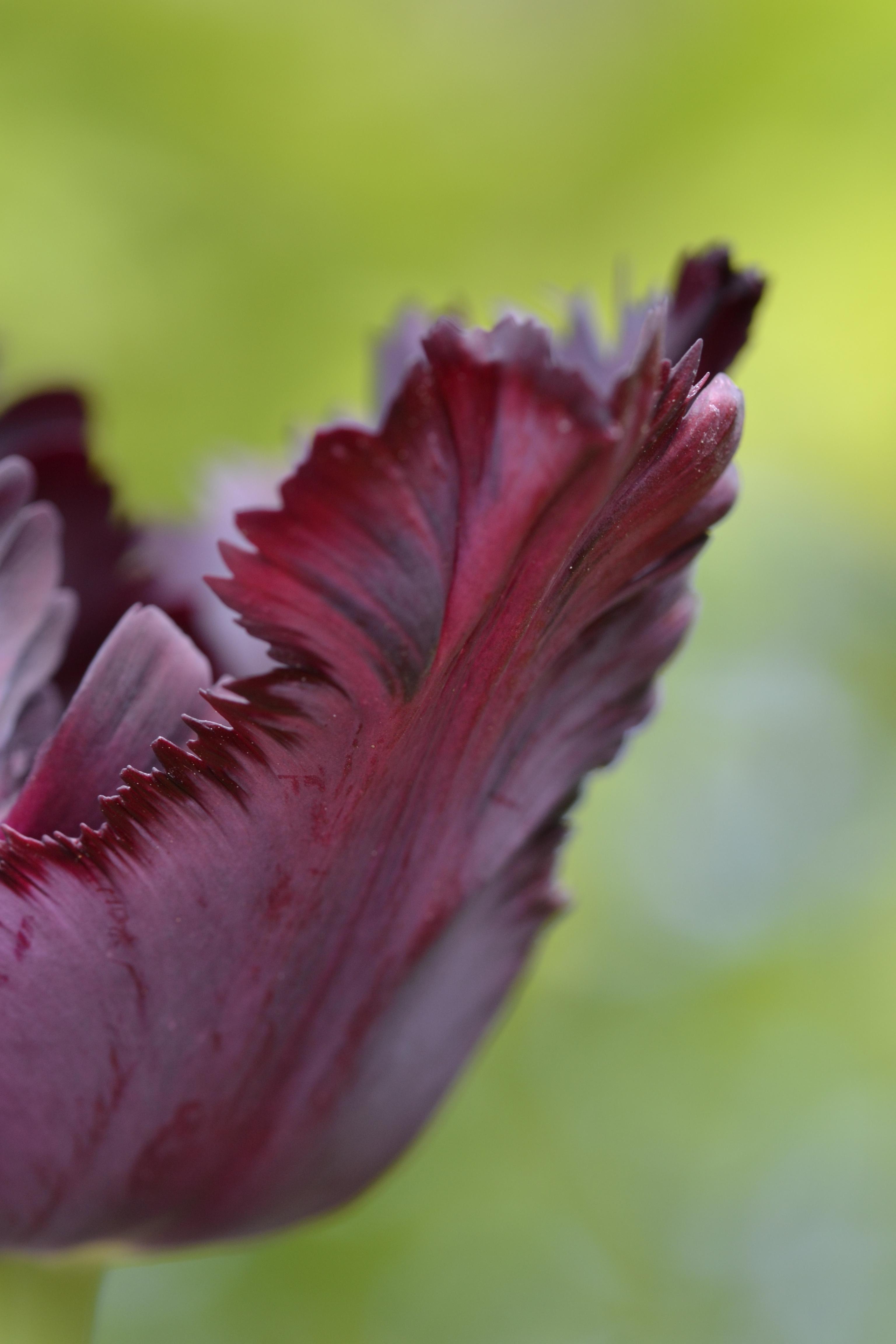 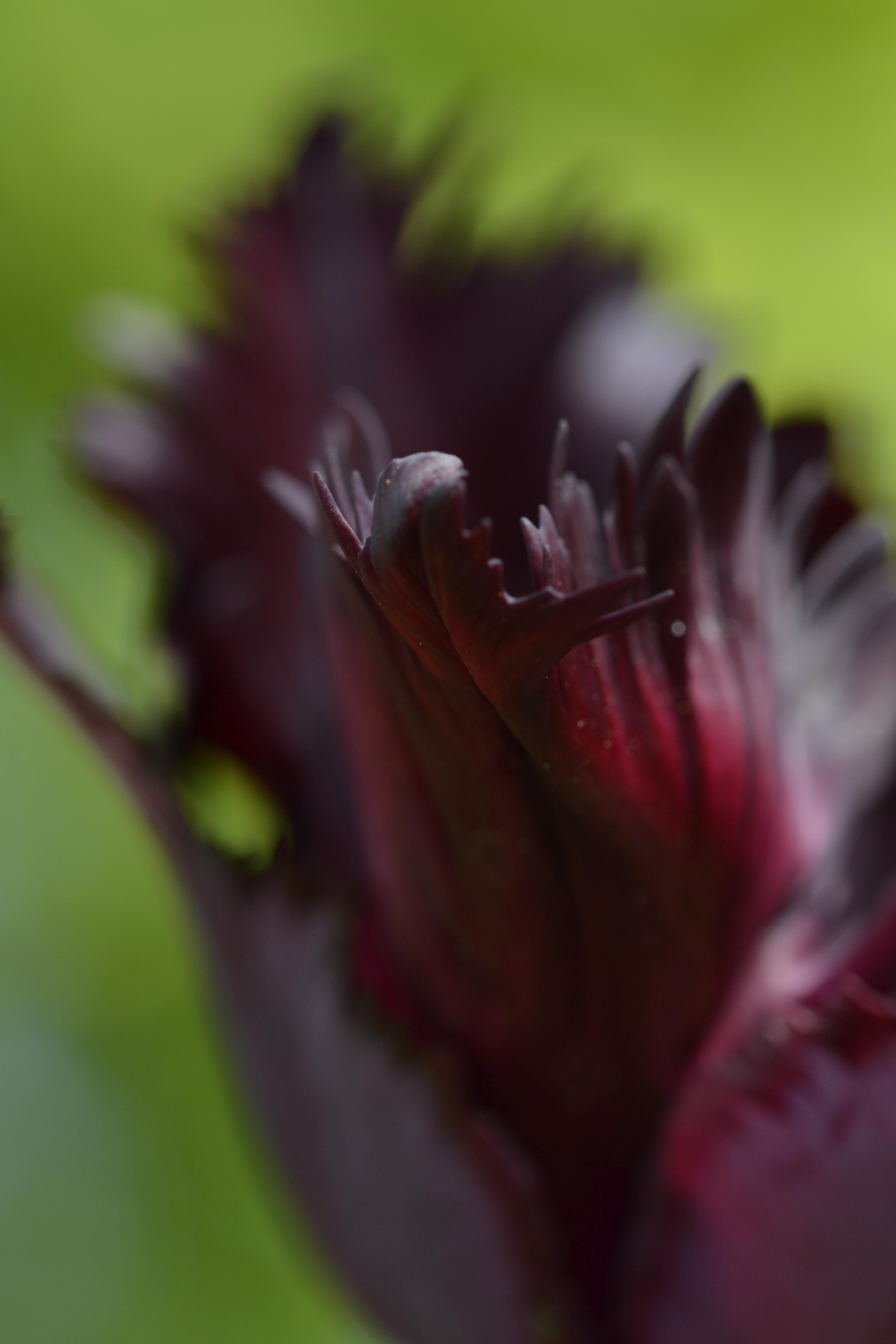 On Wednesday we got the first burst of rain which started lightly but carried on through part of the night. Then we’ve had dribs and drabs since. It’s amazing how quickly it refreshes the garden. I’ve been watering the garden but it’s not a substitute for a good downpour. The water butts have had a chance to be replenished. I’ll just need to step the slug and snail defences again. I might try brewing my own nematodes again now the weather has warmed up a bit. 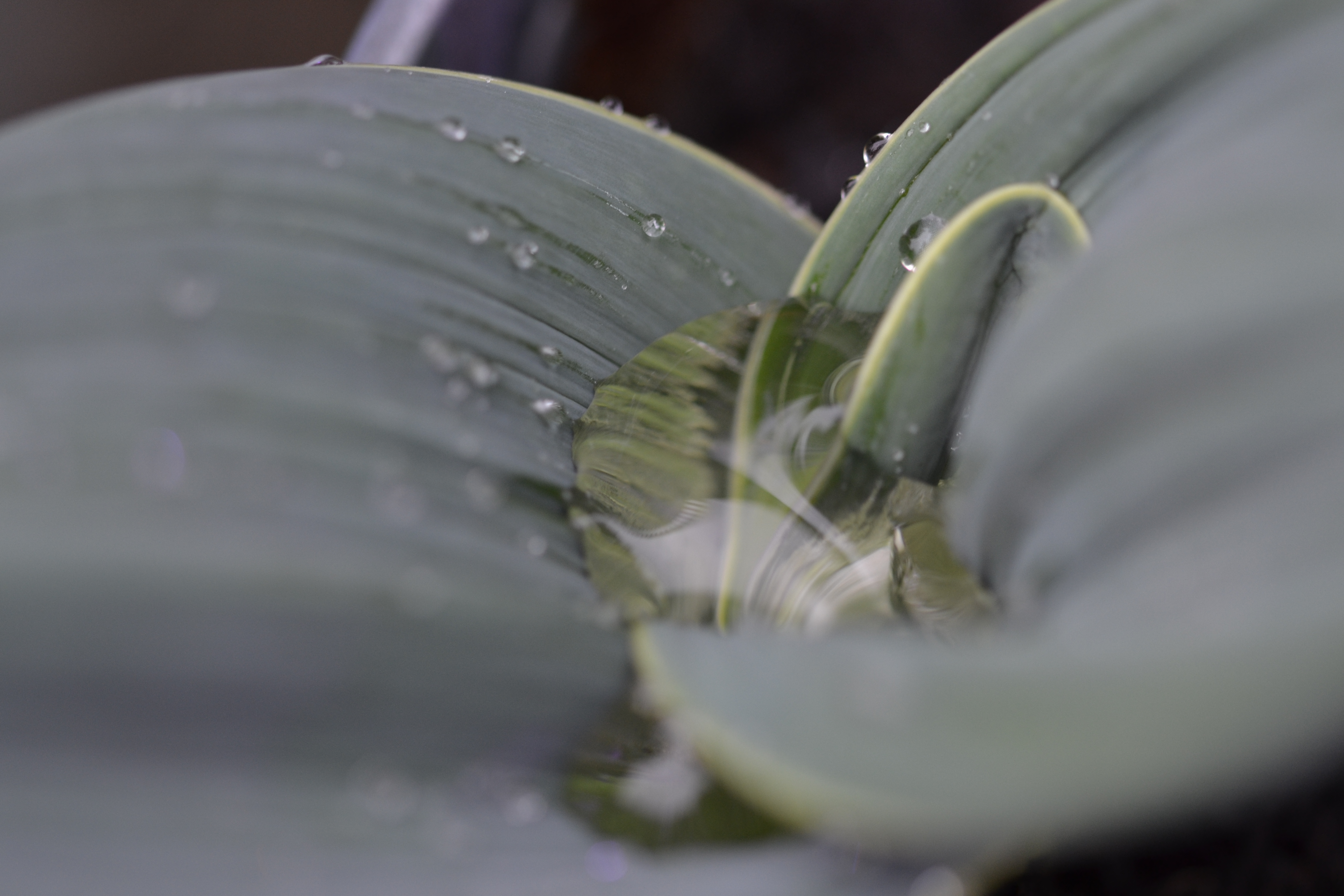 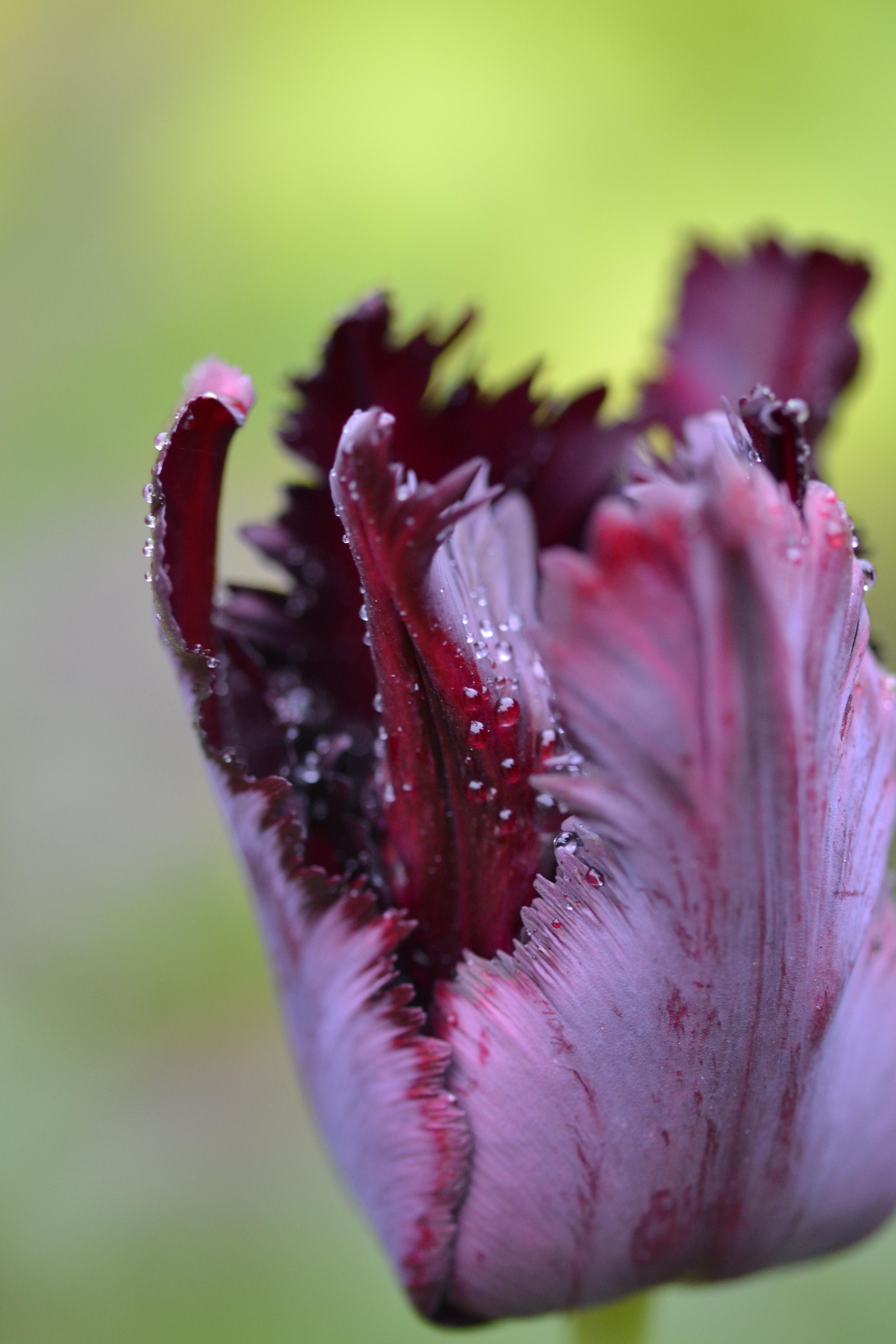 I had previously mentioned that the seagulls have been causing me issues. Normally we happily coexist but this year they have been very destructive. I don’t know if it’s the lack of chips available or nesting material but they keep trying to steal the cyclamen and the Ophiopogon from the front garden. I’d rammed in a collection of bamboo stakes initially. The basic idea was to make it harder to land and take off. This would hopefully put them off spending time in the garden. But they just saw the bamboo stakes as big nesting material and tried to steal them as well. So I’ve been collecting worn bricks from the beach. Then a steel fencing pin through the middle makes a brick spire. I need a lot more bricks to complete it but I think it will make a network of solid obstacles to put them off. If not they are still slightly better looking than a network of bamboo canes. 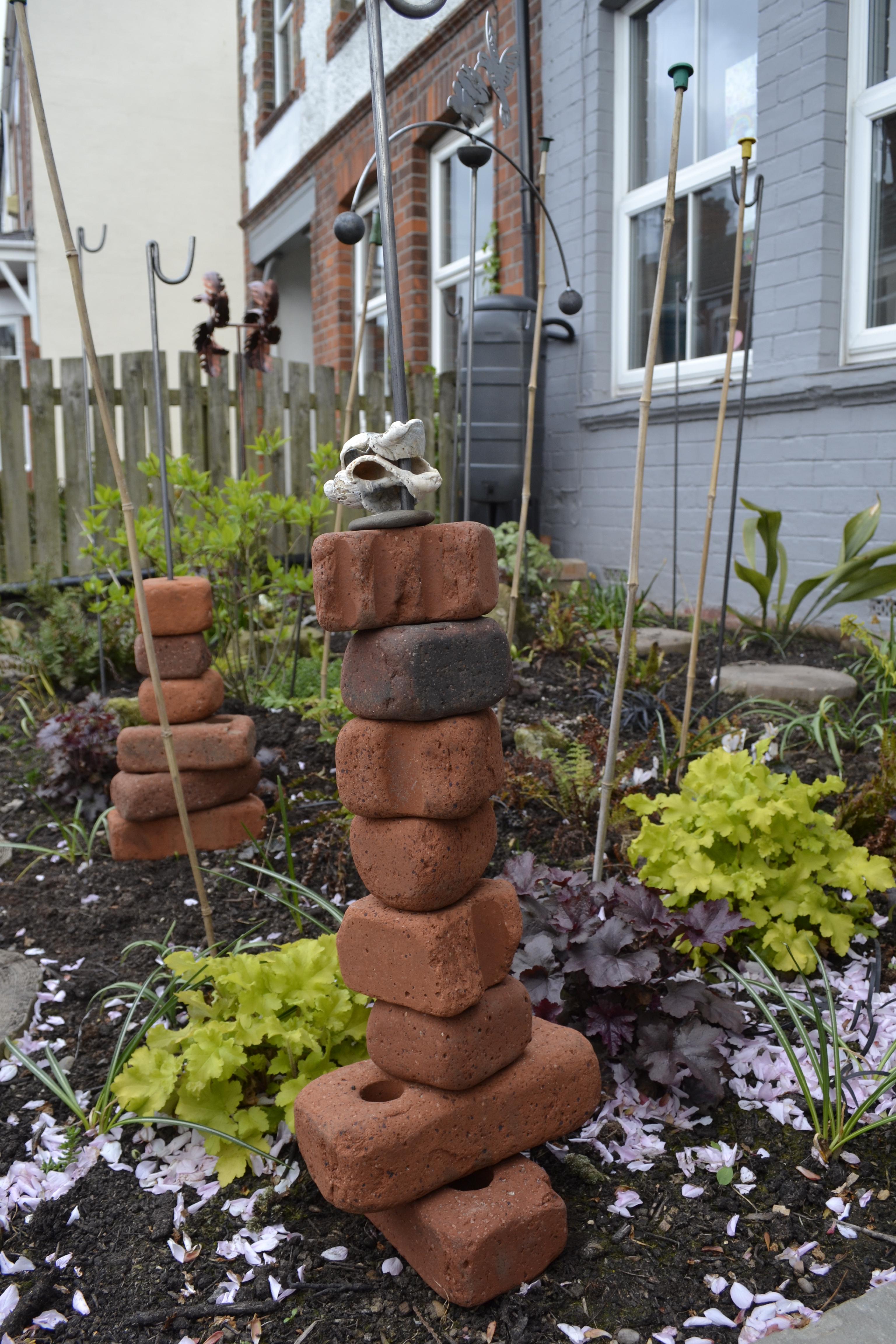 I’ve then got some rope to add when they are all in place as a sort of handrail around the stepping stones and as another blockade for the gulls. In my mind, this will be a better-looking solution to a problem. In reality, it looks like a strange pile of bricks people going past are going to question. It’s a work in progress it might improve. The bamboo canes will go when I get the rope done. 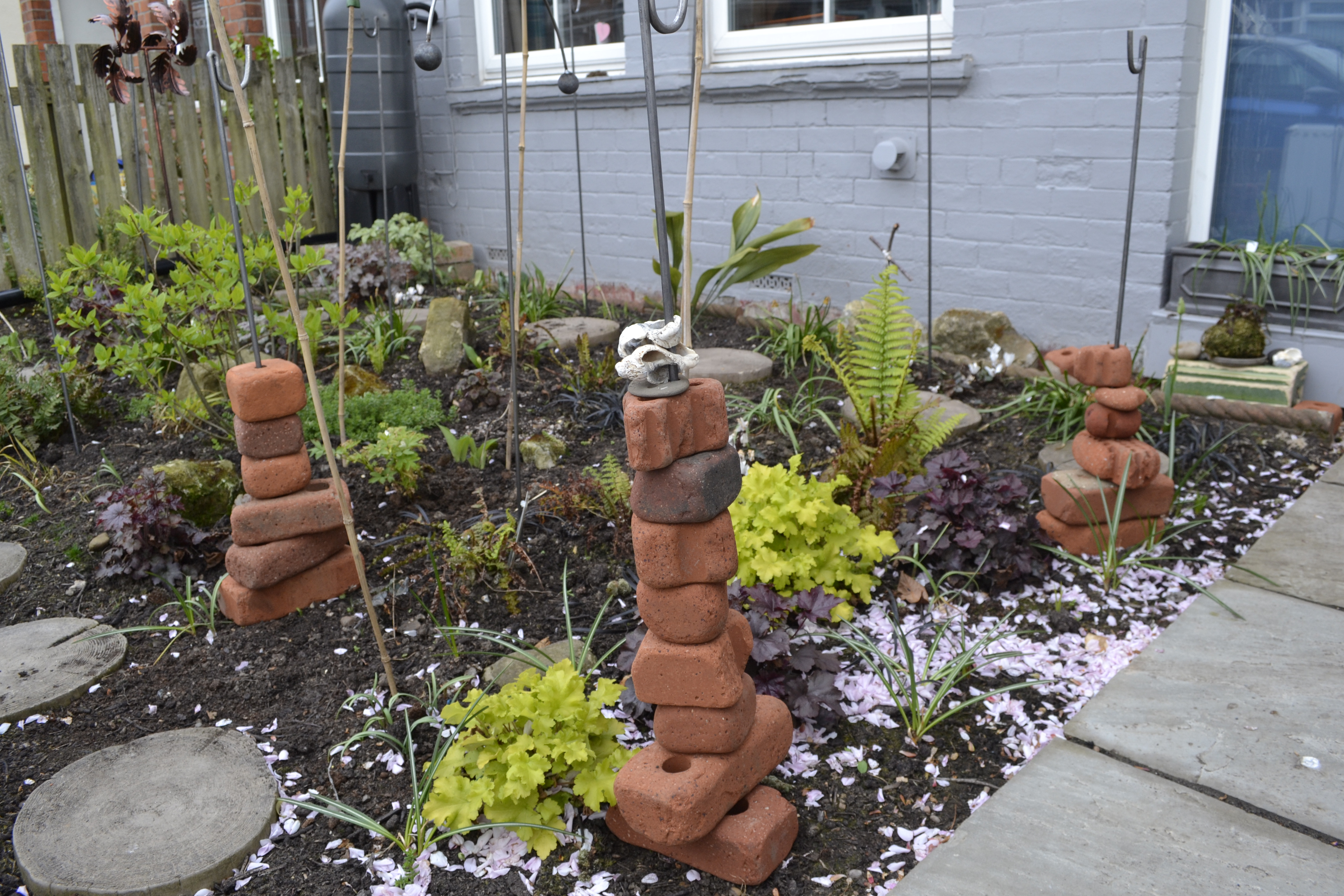 Then I’ve got two different types of wind spinners to try to put the seagulls off as they apparently don’t like these either. I’m not sure these will achieve much but Alice likes them so that’s fine. I like the hummingbird one more than the oak leaf. The fake bronzing on the oak leaf isn’t the best quality. The hummingbird one I imagine will rust up but should still spin even once it does. 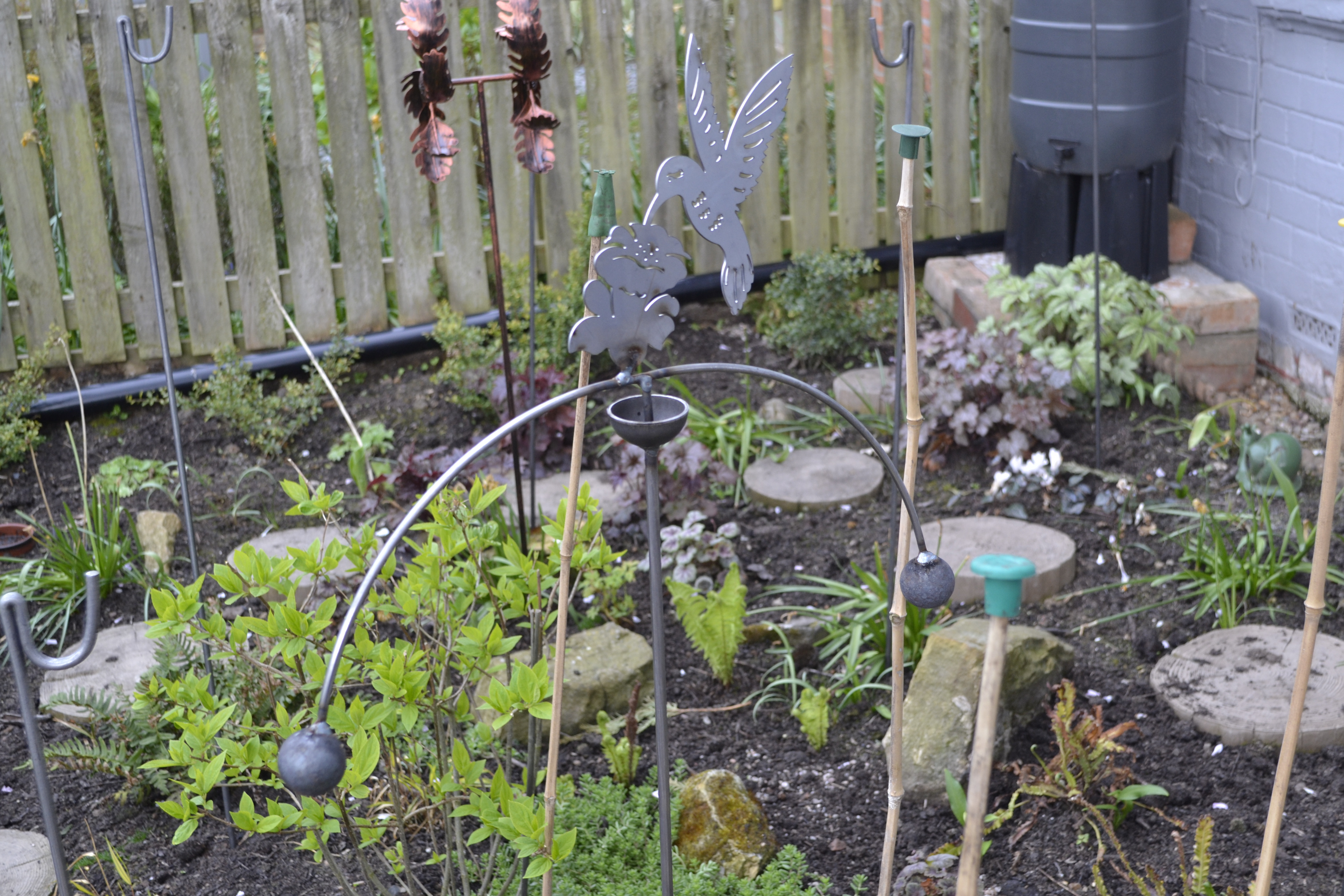 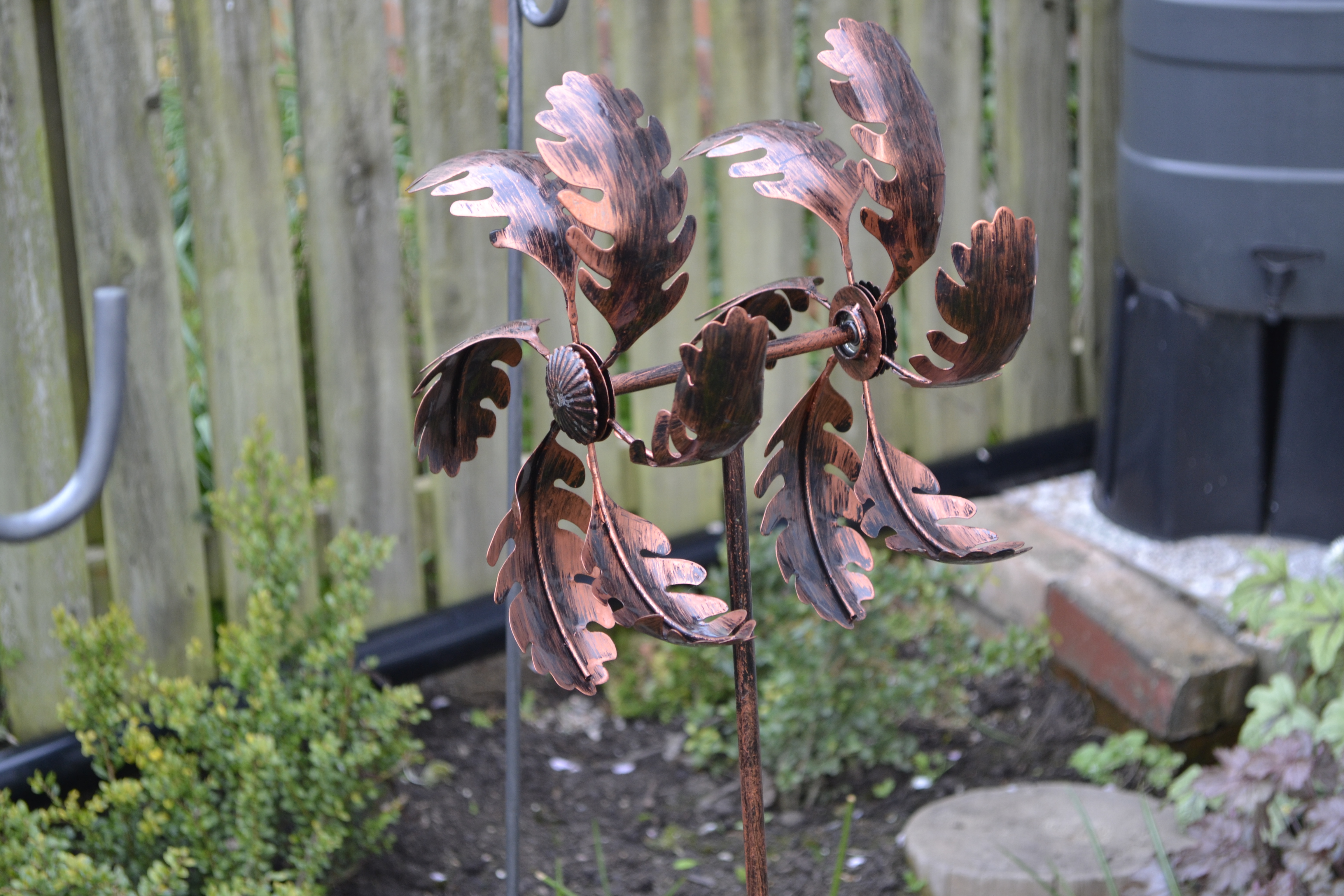 I hope you are all staying safe and coping with the strain of lockdown. I’ve got plenty to still keep me busy. If you are looking for things to do with the kids check out my review of ‘how to get kids gardening‘. Plenty of seeds still to sow, plants to pot on and veg to tend. Alice is still enjoying the quality time with us. We’ll be carrying on with our beach walks to see if I can collect enough bricks to finish the spires.