This week I bring you a houseplant horror story W.F. Harvey. William Fryer Harvey (1885-1937) was a writer best known for writing horror and macabre stories. Born into a wealthy Quaker Yorkshire family he trained in medicine. He served during WWI in various medical roles. He suffered lung damage during the war that caused issues for the rest of his life.

After the war, he worked in adult education until ill health forced his retirement. During his lifetime three short story collections were published. Then after his death, in 1937, a posthumous collection was published following the 1946 film release of his best-known work, the beast with five fingers.

Harvey’s horror stories are interesting as they don’t follow one theme or formula. Many horror writers write one story in different variations, but Harvey’s follow different directions. 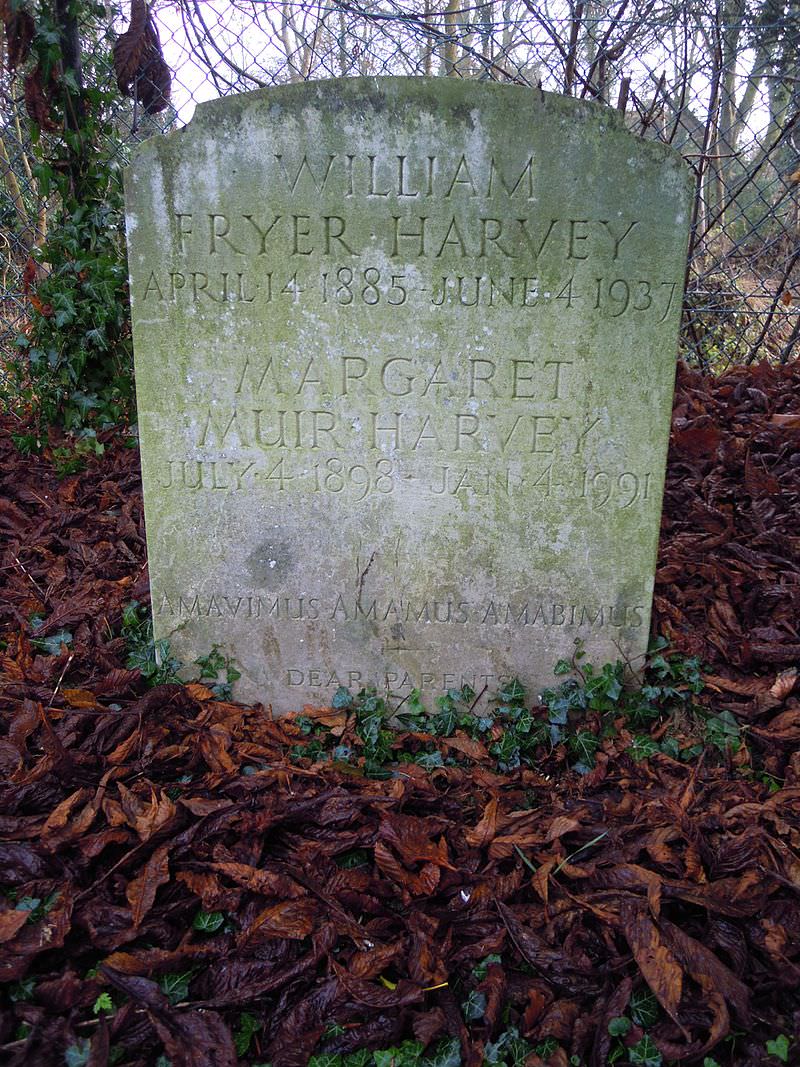 The story today is in the open domain now for copyright purposes. It offers a warning to abusing your houseplants, particularly that stuffy symbol of the Victorian middle class, the aspidistra.

The man who hated Aspidistras

The earliest memories of Ferdinand Ashley Wilton were green memories—of aspidistras. The aunt with whom he lived at Cheltenham was fond of the plants. As you entered the hall of Claremont Villa there was on the right an upturned drain-pipe painted a sage green and decorated with arum lilies. This contained Miss Wilton’s umbrellas and her father’s walking-stick. Projecting into the hall on the left a fretful erection of mahogany supported a mirror, hooks for cloaks, and two shelves. On the upper shelf was a porcelain bowl that contained the cards of callers; on the lower, in a sea-green earthenware pot, precariously rested the first of the aspidistras. The second stood in the dining-room—in summer in the fireplace, in winter on the ledge of the window that faced south. In the drawing-room was the third, raised high above the ground on a fluted wooden pedestal. The fourth and last aspidistra stood on the round table by the couch in Miss Wilton’s bedroom. At night it was carried out on to the landing, for Miss Wilton, remembering something that her doctor had once said about sick-rooms and flowers, thought it on the whole wisest that she should sleep alone. 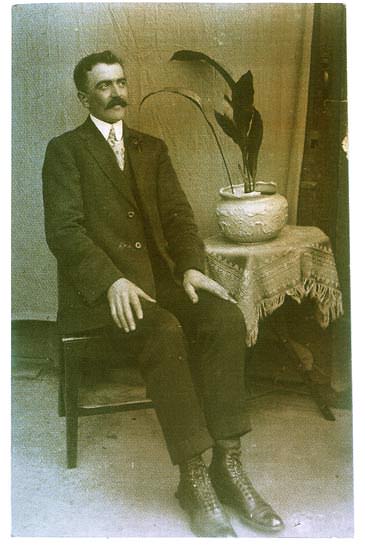 The aspidistras dominated Ferdinand’s life. They were always liable to be upset, so that he was not allowed to run about in the hall or dining-room. When he was very small he had a fancy that they repeated to Miss Wilton the many things that he had done amiss, and especially did he distrust that fourth plant, which stood at night, a sleepless sentinel, on the landing close to his bedroom door. As he grew older he learnt, reluctantly, how to sponge their leaves with soapy water. When a gentle rain was falling he would carry them into the garden in order that they might enjoy what Miss Wilton called a thorough soaking. But if Ben, the poodle, were in the garden he had to be brought in straight away and dried. The laws governing the vegetable and animal worlds seemed to Ferdinand strangely different. In very dry weather the bath would be half filled and the four aspidistras would stand in a row for hours partially submerged. Ferdinand was not allowed to sail his boat among the gloomy islands of this archipelago, but if his conduct had been satisfactory he was permitted to pull the plug before going to bed. Ferdinand was still a very little boy when he was sent away to school. He was constantly ailing and even when he was well he received more than his due share of kicks and bruises. In the matron’s room he felt as if he were back again in Cheltenham, the pot of aspidistras reminded him so much of his aunt. On it he vented the hatred of his schoolboy world. When the matron was called out of the room he would share with the aspidistras vegetable laxatives and iron tonics, or impart to their leaves an unnatural glow of health by polishing them with Scott’s emulsion or liquid paraffin. A vertical section of the pot illustrating Ferdinand’s activities would have shown a thimble, three hairpins, a number of needles, the case of a clinical thermometer and, an inch below the surface, an almost complete tessellated pavement of sugar-coated pills. When, however, in a rash moment, Ferdinand, in applying the contents of a bottle of tincture of iodine to the leaves, found to his alarm that the black stains were irremovable, the fat was in the fire. The matron made a formal complaint, but nobody owned up. The ten more or less ailing boys who had visited the room on that fatal morning were indiscriminately punished. To them it was known that Ferdinand was the delinquent. He did not escape. Like the aspidistra he was poked and prodded and shaken to the roots. Boyhood passed. At the university Ferdinand achieved a certain success. He published a volume of verse and was founder and secretary of the Mid-Victorians. He only met two aspidistras during the whole of the time he was up, one in the porter’s lodge whose leaves he would absent-mindedly trim with pocket scissors, and the other in a dentist’s waiting-room. Miss Wilton died. She left to her nephew the villa at Cheltenham and four hundred pounds a year. Ferdinand was able to devote himself to literature, and from Bloomsbury lodging-houses wrote his first series of Antimacassar Papers. It was at this period of his life that he found himself once again under the influence of aspidistras. He began by nagging them, treating them as ash-trays, pen-wipers, and cemeteries for safety razor blades. He ended by torturing them. One, he slowly did to death with weedkiller; into another, following the example of the Good Samaritan, he would pour in oil and wine. A third he garrotted with rubber bands; a fourth, slowly succumbing to a solution of bath salts, filled his room for weeks with the faint perfume of lavender. A horticultural detective would, of course, have quickly got on the track of the Bloomsbury murders, but no suspicion ever fell upon Ferdinand. He was so inoffensive, so subtle, so respectable, and in his own way so quietly ornamental. His requirements were so few and he needed little looking after. His landladies were always sorry when he went. The aspidistras never got over his departure.

Ferdinand, of course, should have realised that it is dangerous to indulge in hatred. The man who hates open spaces as likely as not will be killed when crossing a square. It isn’t the motor car but the square that kills him. Ferdinand had his warnings. Once on a wet morning a pot of aspidistras fell from a third-storey window ledge on to the pavement at his feet. On another occasion when travelling by train a sudden stop brought down from the rack a heavy and bulky package that indubitably involved risk of injury to passengers. If Ferdinand had not been sitting with his back to the engine he would have been struck on the head by the most monstrous aspidistra he had ever seen. 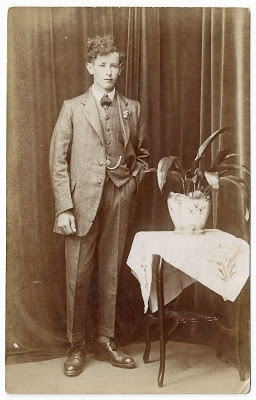 He was smoking one day in a despondent mood when his friend Basset Tankerville chanced to call. The Blue Review had noticed his latest volume of essays with less than its usual appreciation. ‘Listen to this,’ said Ferdinand to Basset. ‘“We begin to be conscious of the limitations of his point of view—the interstices of a Venetian blind. He is the embodiment of the aspidistra.” And then,’ said Ferdinand, ‘they have the impertinence to give half a column to a review of Gertrude Stein.’ ‘Glorious jingles,’ said Basset. ‘You should really try your hand at them yourself. “Ferdinand Ashley Wilton with his dashed aspidistras that wilt unless fertilised. With black tobacco ash. Ad astra Aspidistra.” But seriously, you do remind me of the plants. You are becoming more and more green with envy, more and more pot-bound. And, by the way, have you ever thought of how applicable to aspidistras is St Paul’s description of charity? That specimen which I see before me suffereth long and is kind. It vaunteth not itself, doth not behave itself unseemly, seeketh not her own, is not easily provoked. Beareth all things, believeth all things, hopeth all things, endureth all things. And the same, Ferdinand, in a large measure is true of you. You and the aspidistra are one.’ Those light words of Basset Tankerville, spoken as they were in jest, marked an epoch in Wilton’s life. They stirred the vegetable fibres of his being. His conversation became more and more torpid. The wit that had enlivened the Antimacassar Papers vanished and though from time to time he still wrote, his style—polished and stately as it was—became dull. He left London to live once again in Cheltenham, but it was as an invalid that he lived. Though he took the waters regularly his skin acquired an unmistakeable greenish tinge which the dark green cloak he always wore made all the more noticeable. A little odd, his housekeeper thought him, and very old-fashioned, but Mr Wilton gave next to no trouble. On sunny days she would pull up the Venetian blinds and place his chair in the window, where he would sit quietly for hours occasionally sponging his long leaf-like hands with soap and water. He was happiest, however, when the faintest of drizzles was falling. Then the man who hated aspidistras would be wheeled out into the rain to enjoy a thorough soaking.

A warning to plant keepers. Have you become the plants you look after? Hope you’ve enjoyed the story. Are there any plants you need to ask forgiveness from? For more houseplant conversation check the twitter hashtag #houseplanthour A fortnightly conversation on Tuesday all about houseplants.