As we enter a new month I’ve been spending the last week and a half starting to clear and destroy ready for the new season. We’ve been in the current house for about two and a half years and I’ve given existing plants a chance. There are many lovely established plants in the garden but there are some that are wrong for various reasons. Some went through too long without proper care others are just in the wrong place and some are too close together. I’m attempting to remove the bigger trees and shrubs over a few weeks. I can’t currently drive to the tip so I’m trying to get it all in the brown bin.
1. New kit

To aid me in removing a number of the plants I’d ordered a few new bits of kit to ease the job. I saw that gold leaf gloves were on offer through Amazon a few weeks back and ordered myself a pair of soft-touch gloves. I already own a pair of tough touch gloves and love them. I don’t particularly like wearing gardening gloves but as I planted quite a few spikey options they are necessary for some jobs.

Then two Niwaki purchases to help with clearing the perennials and spikier plants. Watching Monty in Japan is giving me a desire for more Japanese tools. A set of arm guards that just slip on over your clothes. Then a rice sickle recommended for cutting down perennials. While not essential kit unless you have a lot of ornamental grass or meadow flowers to scythe down it was satisfying to use though won’t get as much use as my hori-hori. 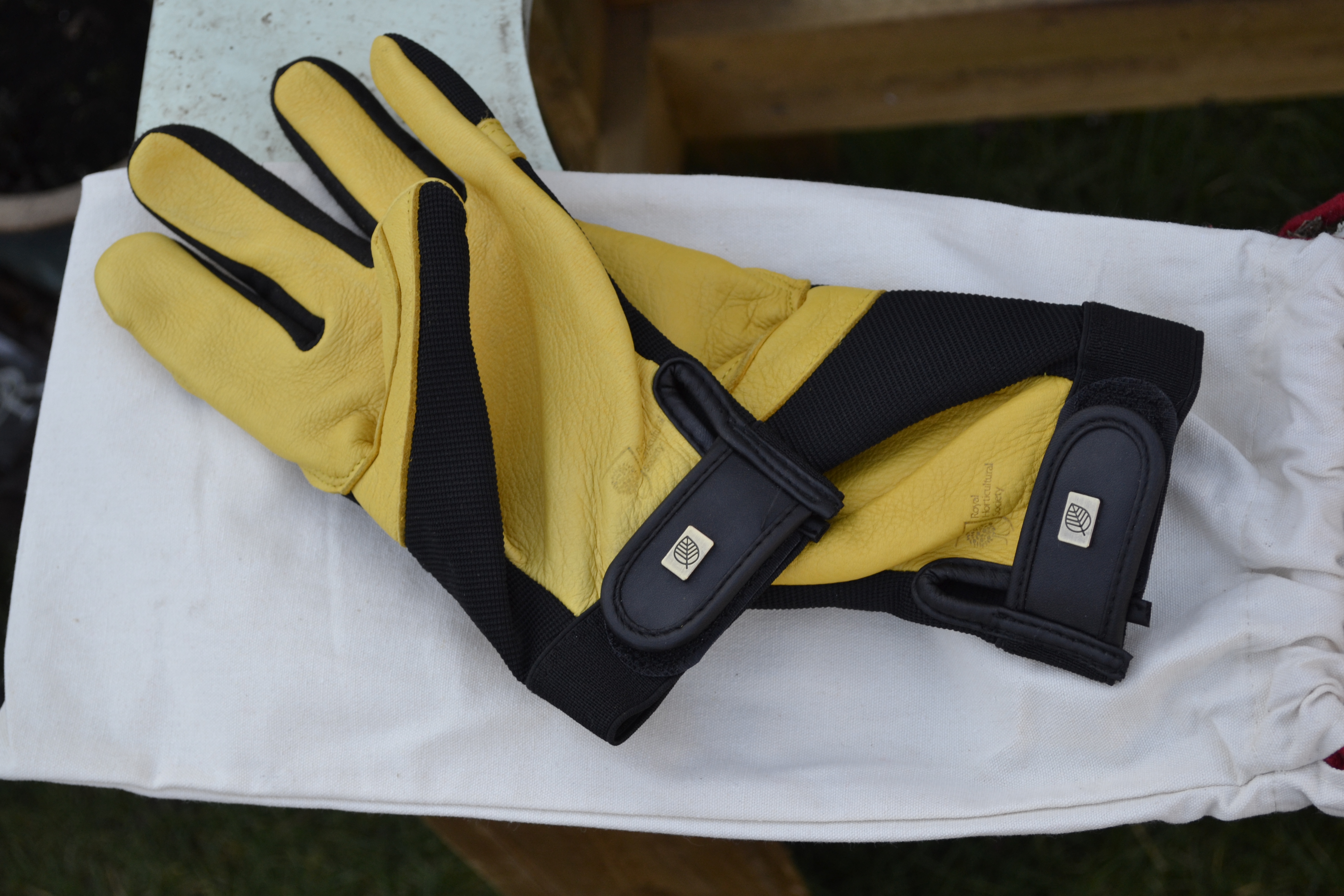 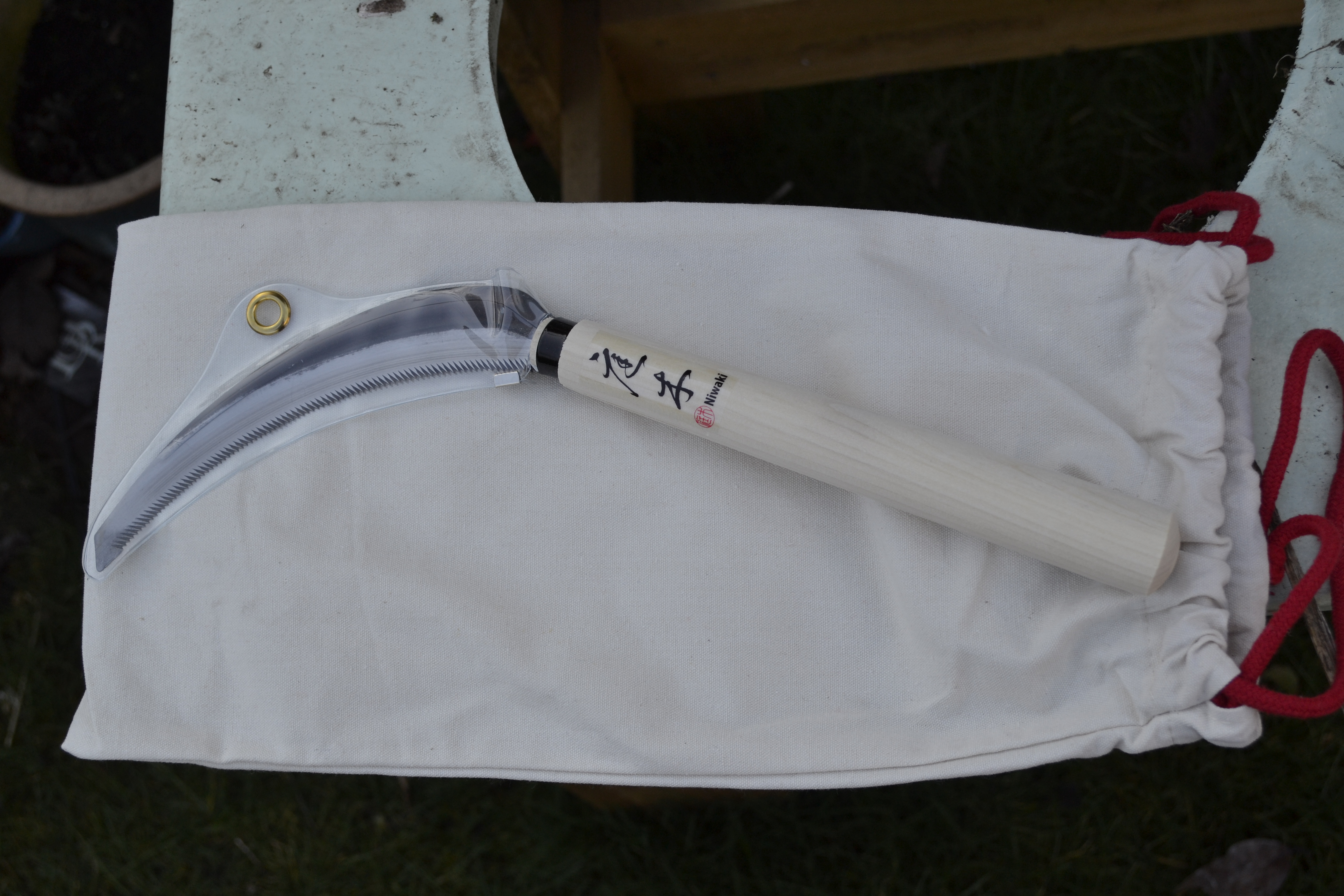 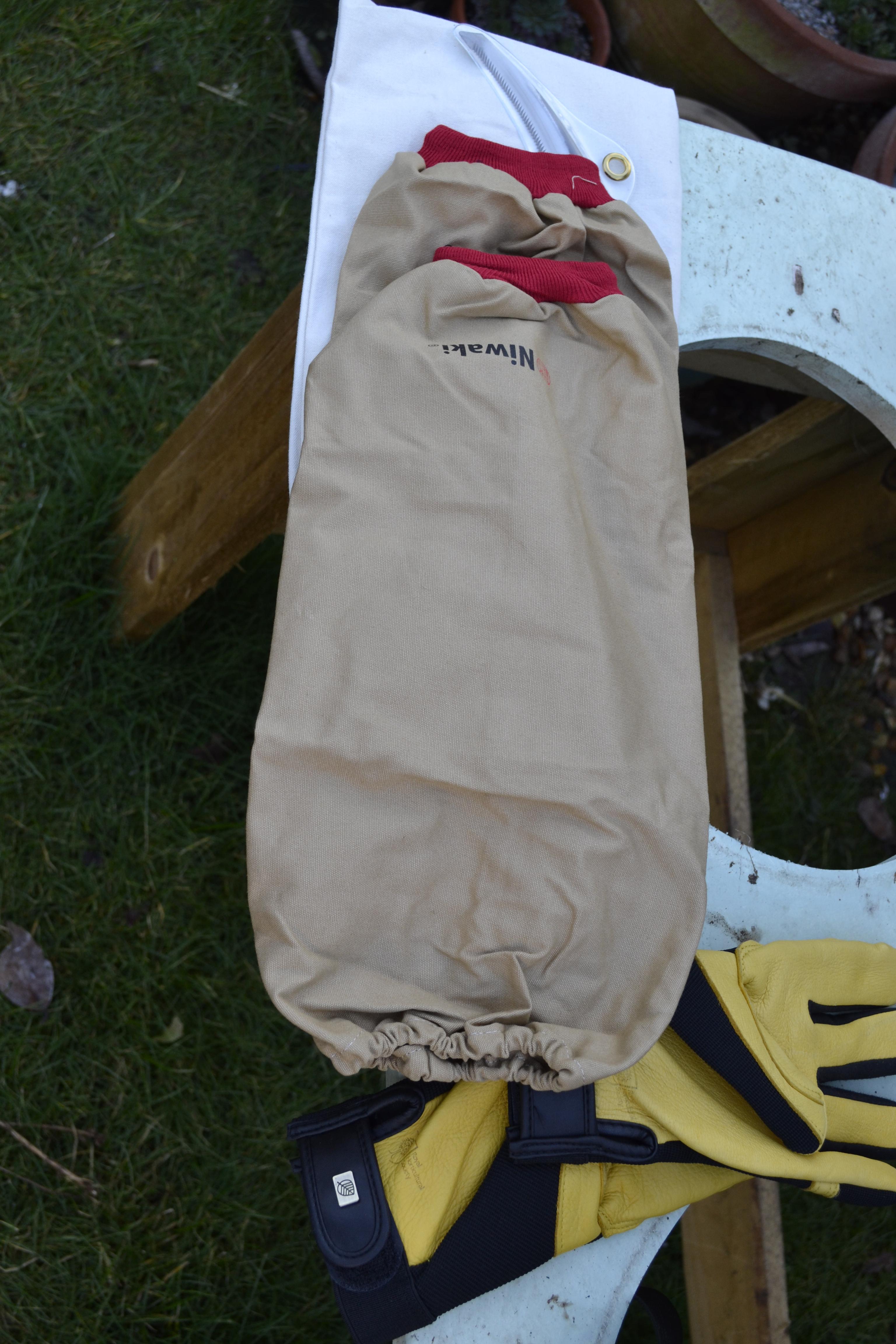 This is the first of several larger established plants I am removing. This patch of conifers I think was actually three conifers planted too closely together. I don’t particularly dislike conifers but these don’t go with anything else in the border and they are growing outwards due to their proximity to each other. I’ve given them three Summers to decide what to do with them. I can’t untangle them as the inner growth is all dead now so they’ve been dug out. The dogwood poking in at the side will be getting a trim to the ground in a few weeks. The dogwood will regrow with nice new red stems but clearing these and the dogwood will create a more open space here and a view to the camellia when it flowers. 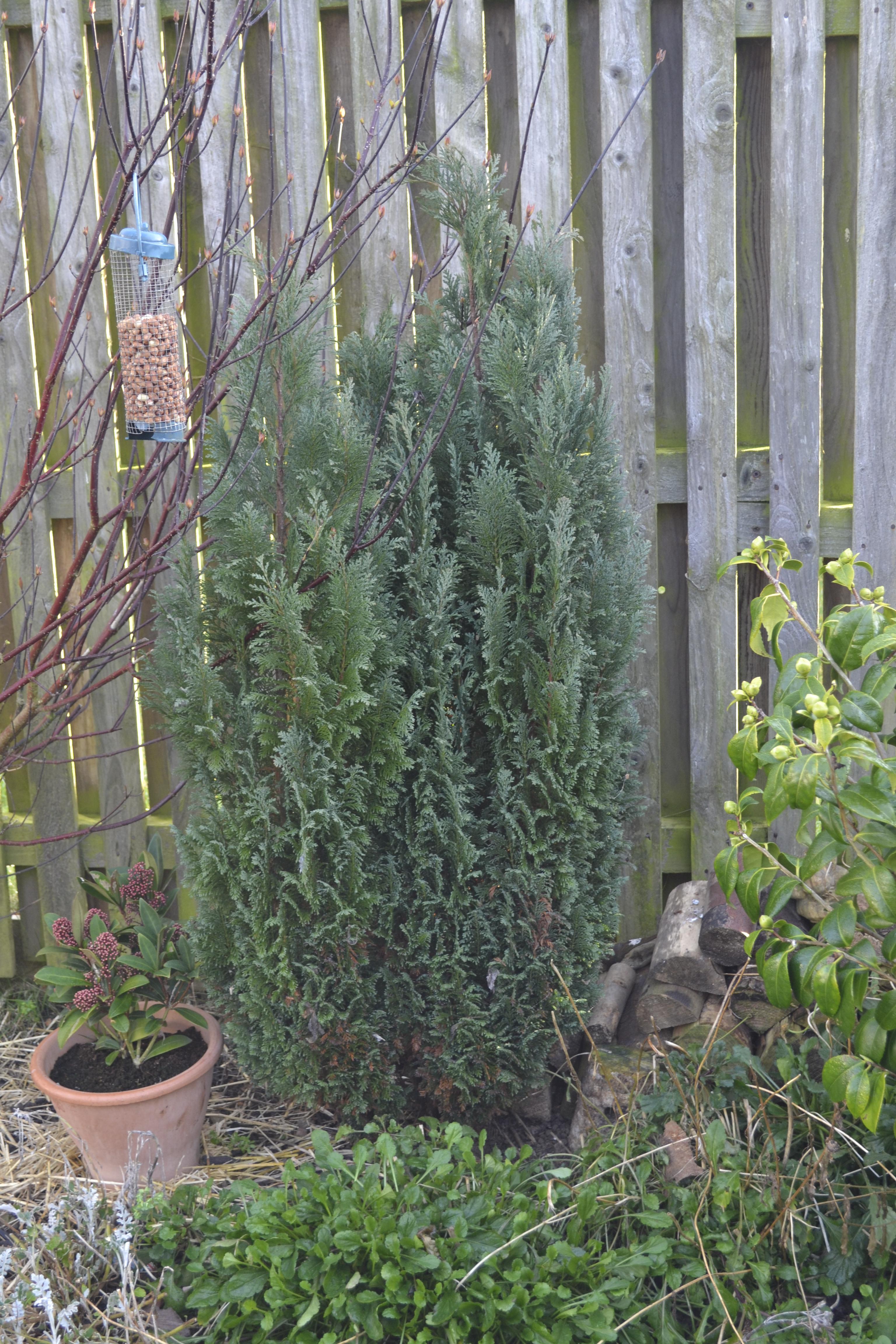 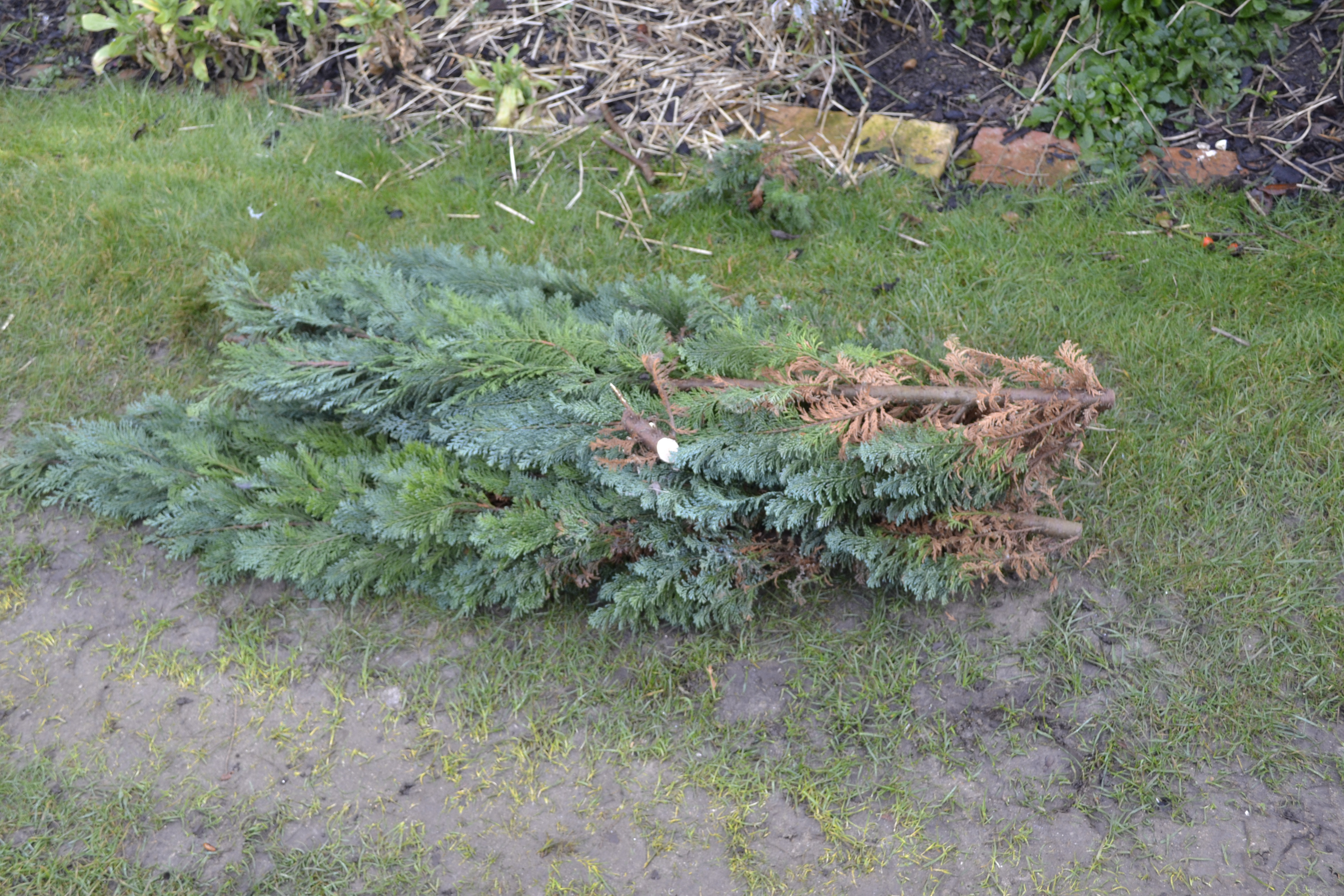 Nice space for something new. 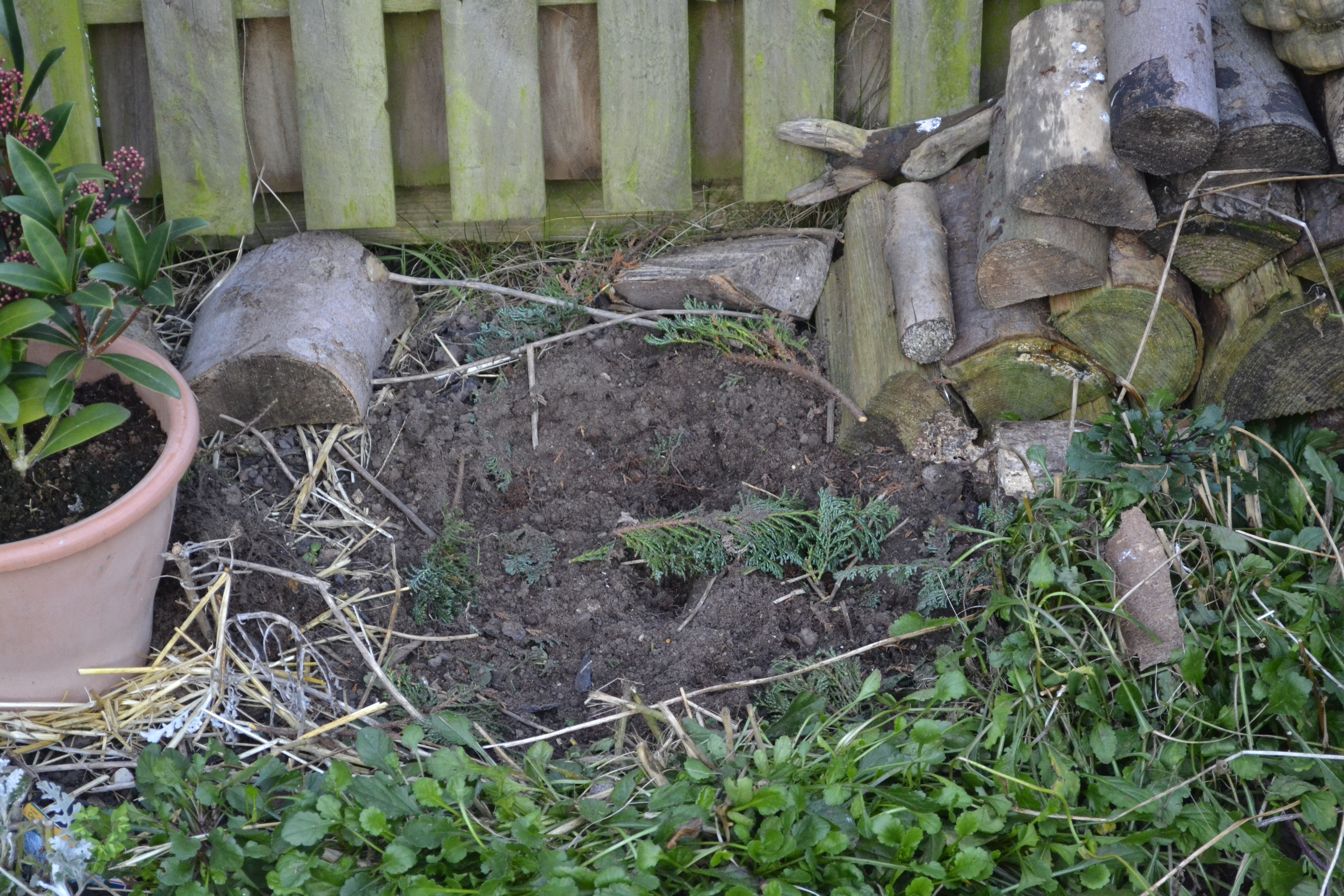 Having returned from the in-law’s house and seen all their finches on their bird feeders I ordered a new sunflower feeder. I buy most of my seed from Haiths. They produce good quality seed that the birds love. I was just going to order the sunflower hearts but they had an Autumn Attraction pack offer for two feeders and two different seed mixes.

The sunflower feeder is currently hanging from the clematis but I will find it a better spot. 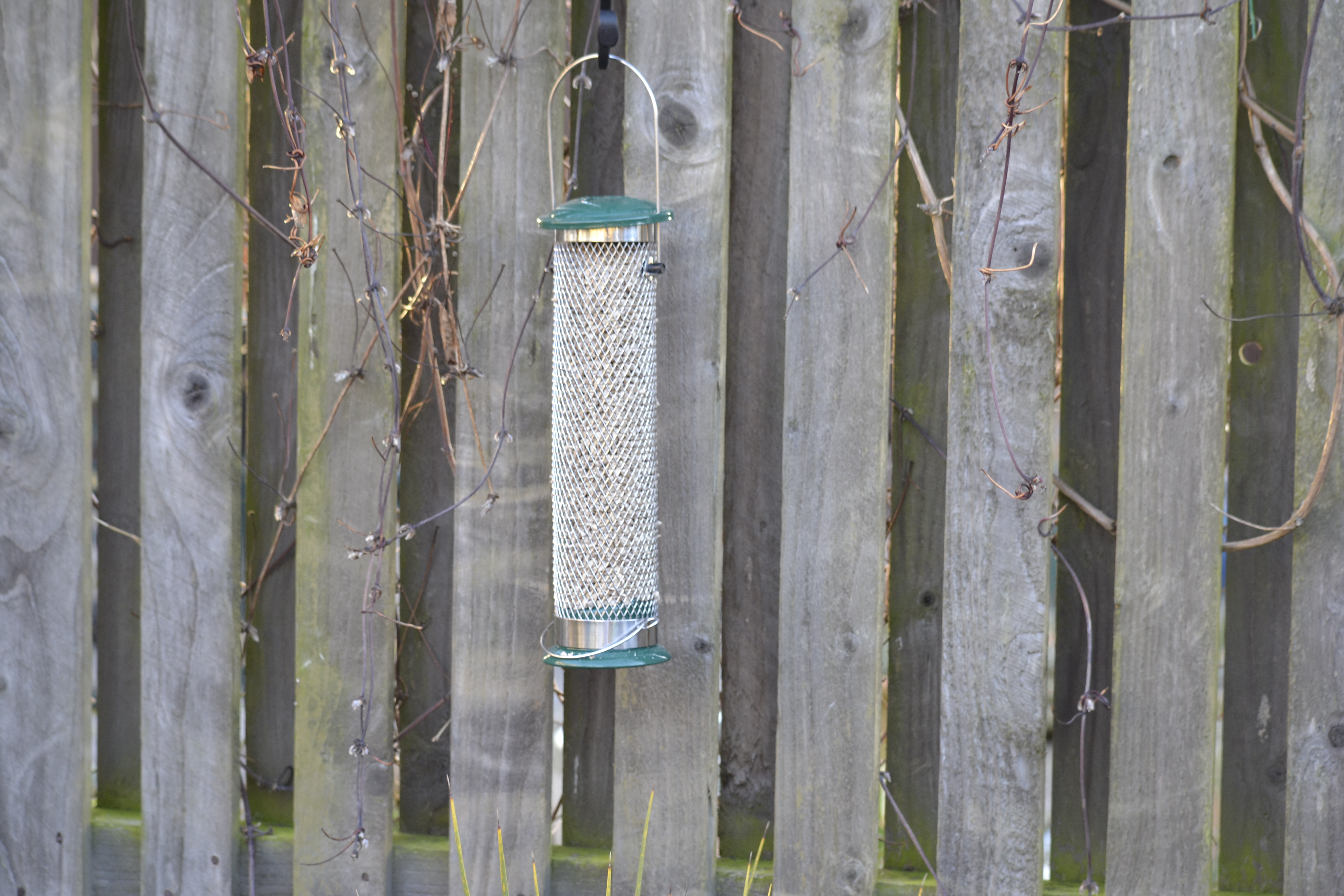 Then a small bird feeder. Keep the seagulls and greedy pigeons out. 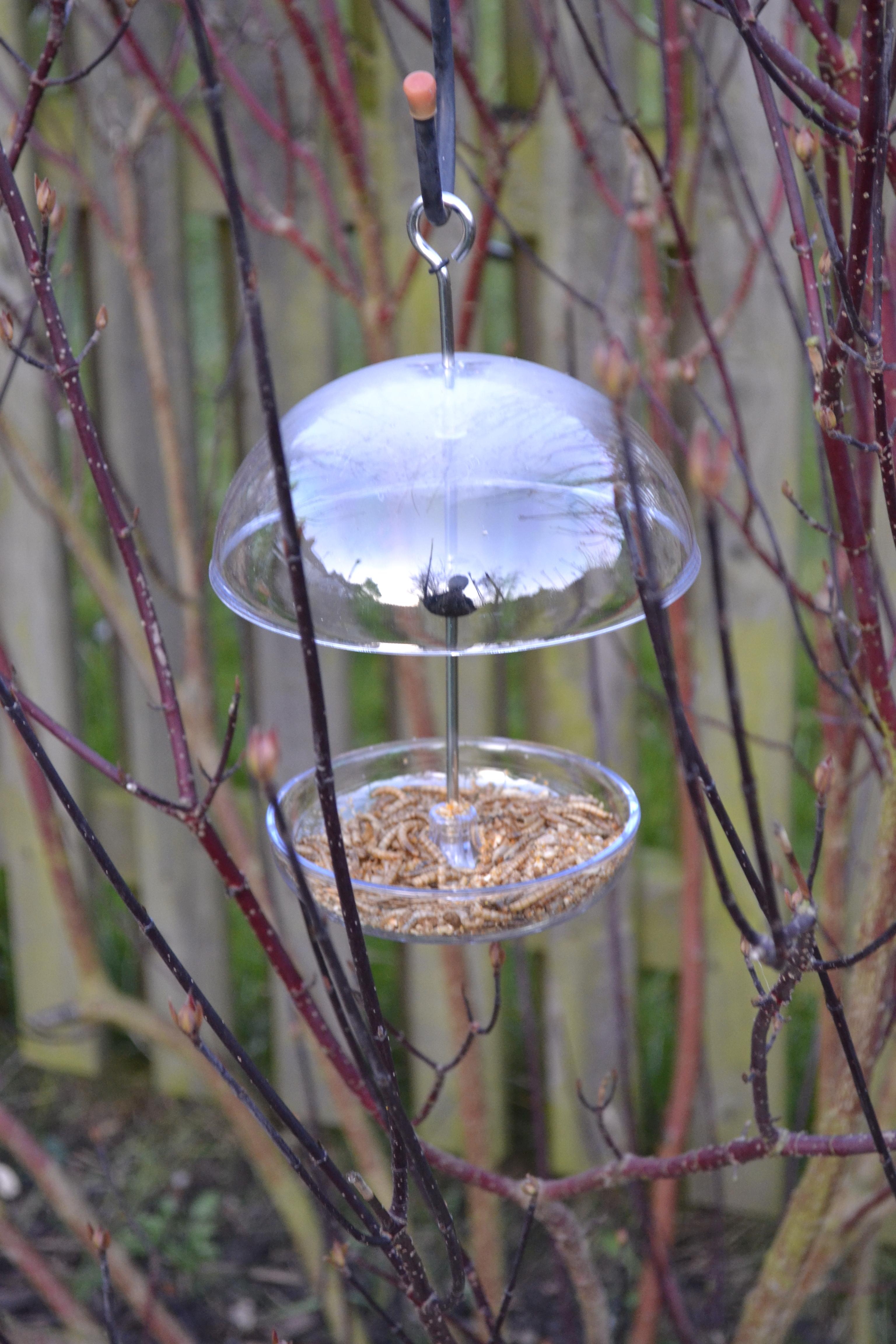 Within minutes of going back inside the tits came to check out the sunflower feeder. 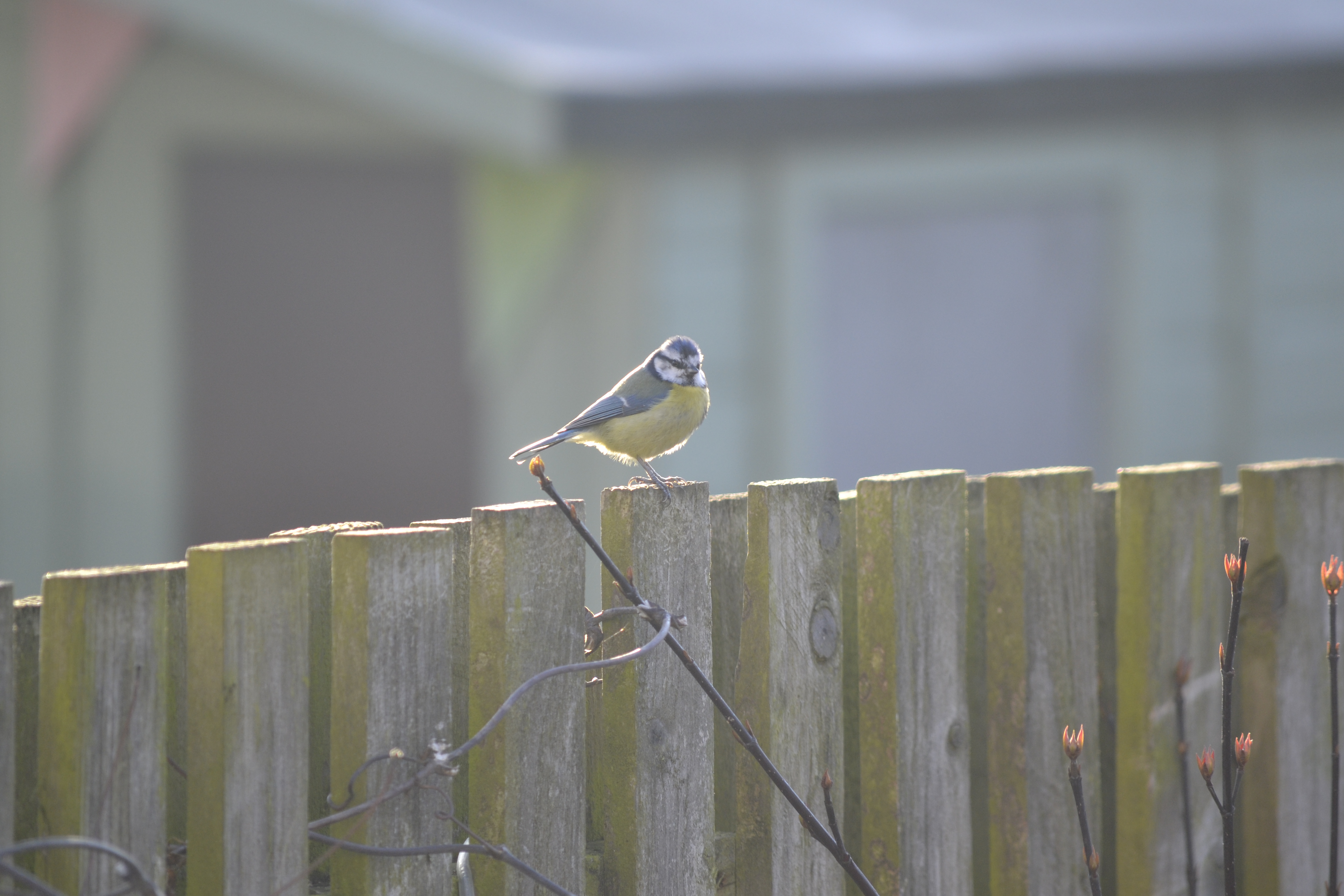 The two hellebores I planted at the end of last year are really getting going now. Christmas Carol has pure white flowers. They develop rather ugly blotches as they fade but are very pretty while they are white and the few pollinators around seem to like them. 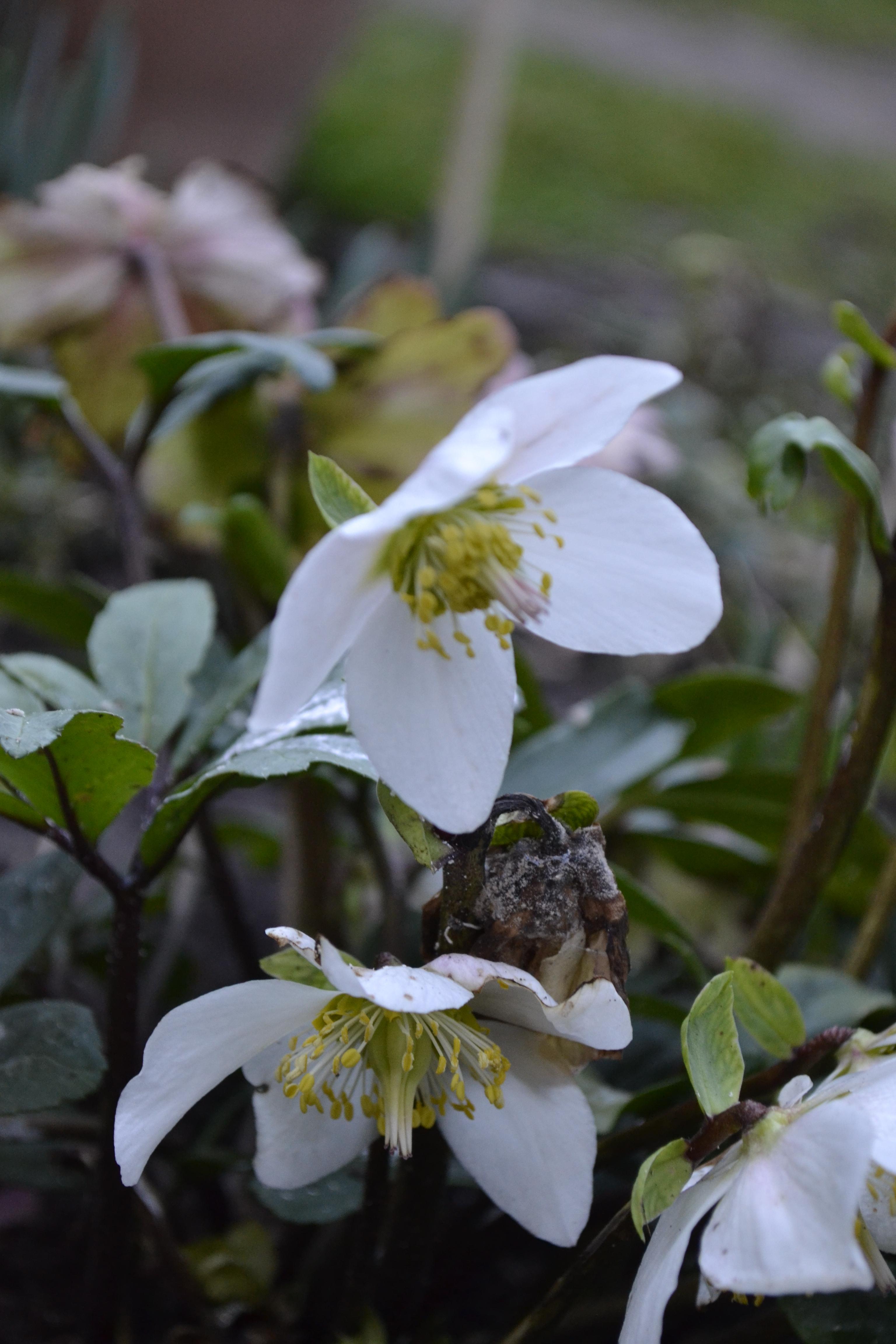 Angels glow is currently the prettier of the two with a mass amount of dirty pink flowers. These fade away better retaining similar colours as they fade. 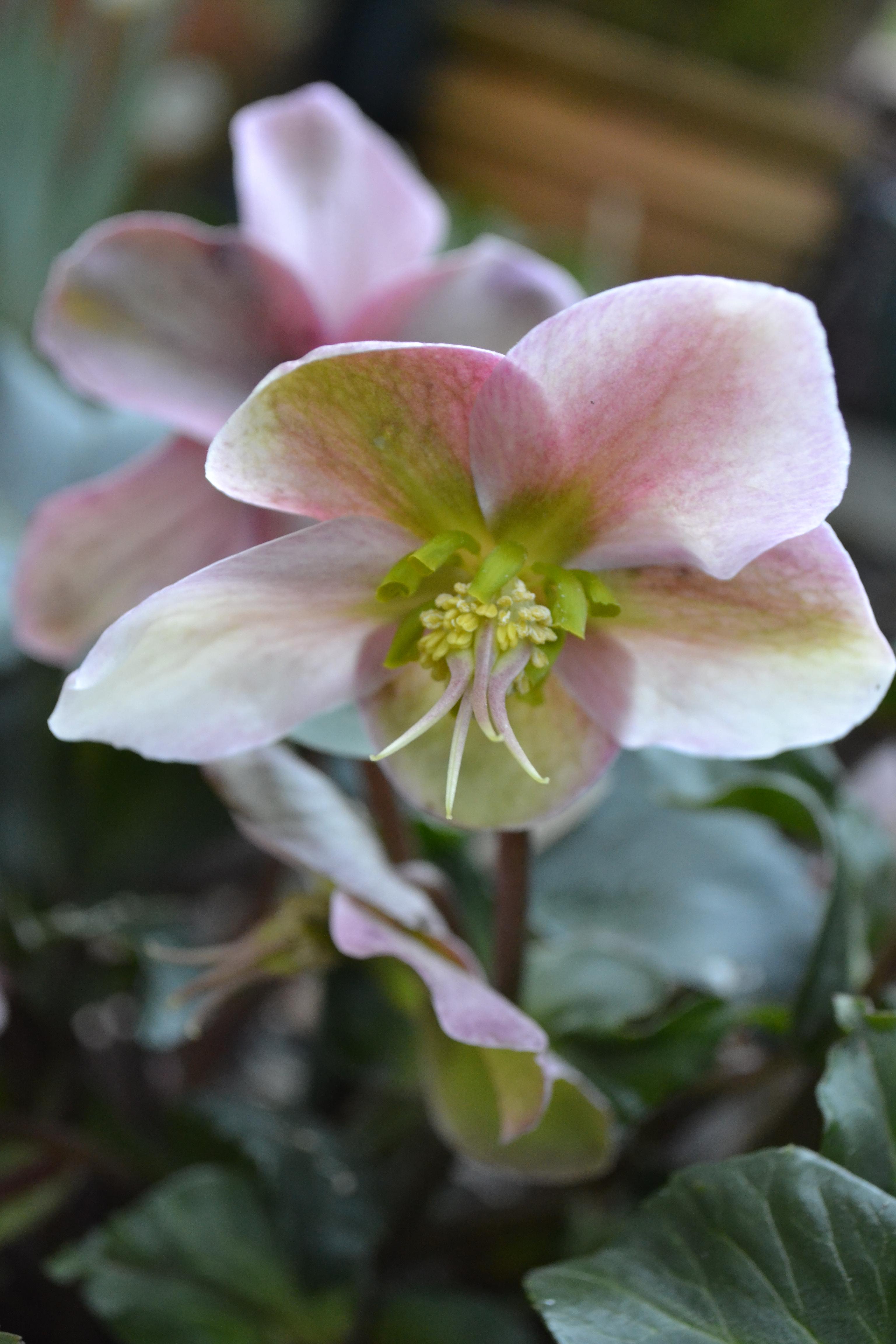 As I’ve enjoyed the two I had and seeing many more at the in-laws and Burton Agnes I bought another variety. Lividus seems to open quite creamy before fading into green. I rather like the leaves on this one as much as the flowers. 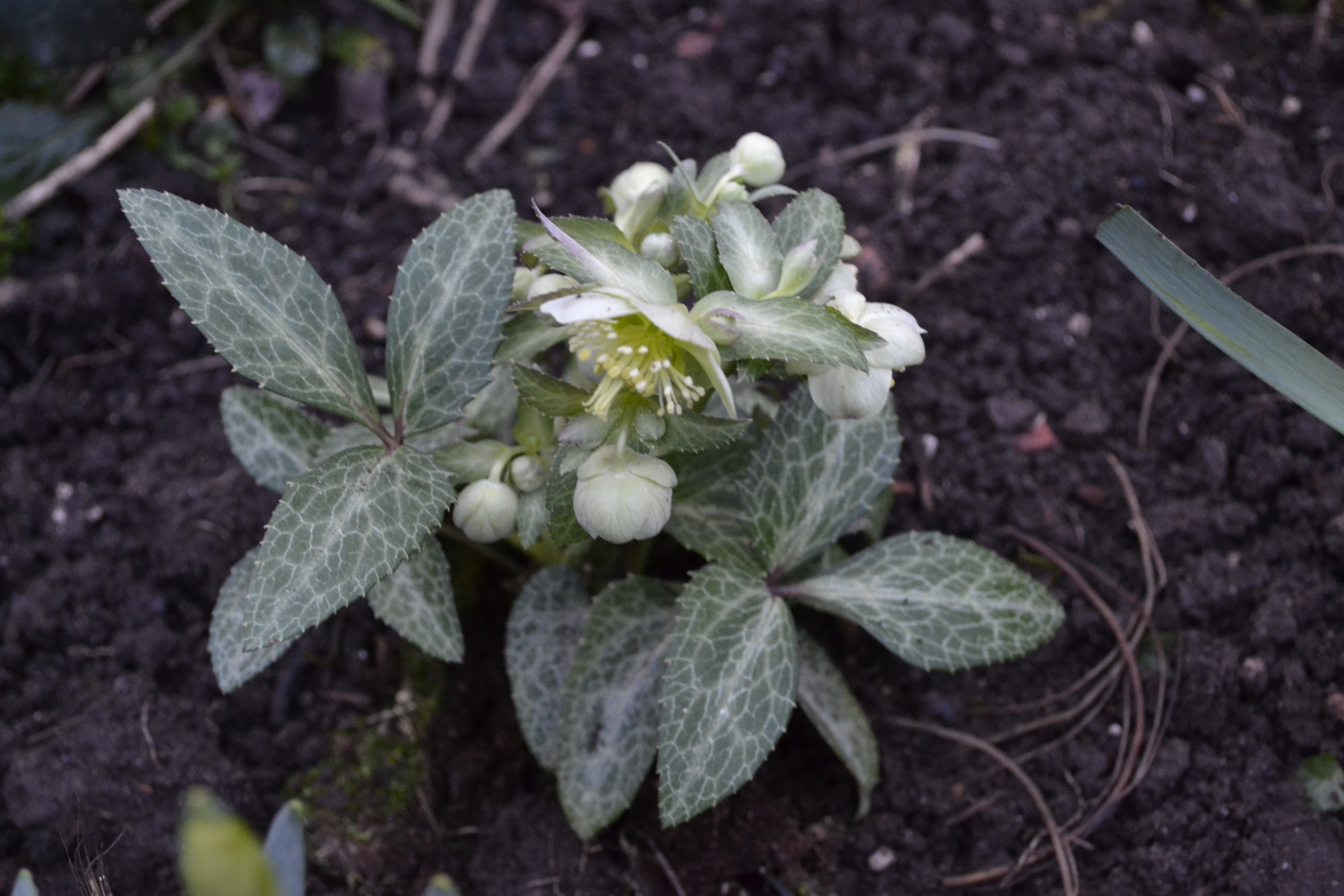 Alice was taken with this windmill in home bargains. It’s been stuck in the garden border though I’m sure she’ll continually relocate it decapitating other plants along the way. It may be time to allocate her a plot of her own. 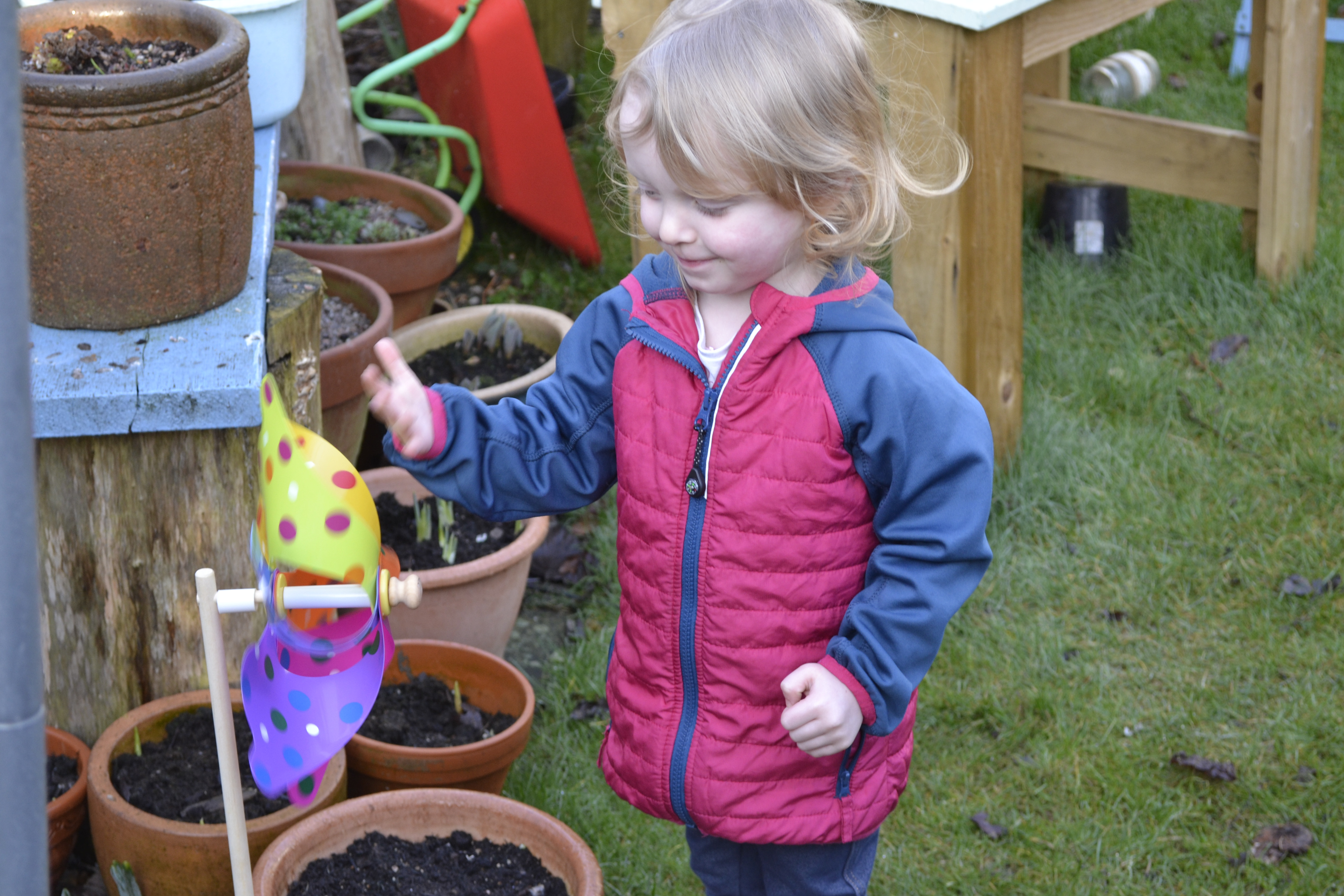 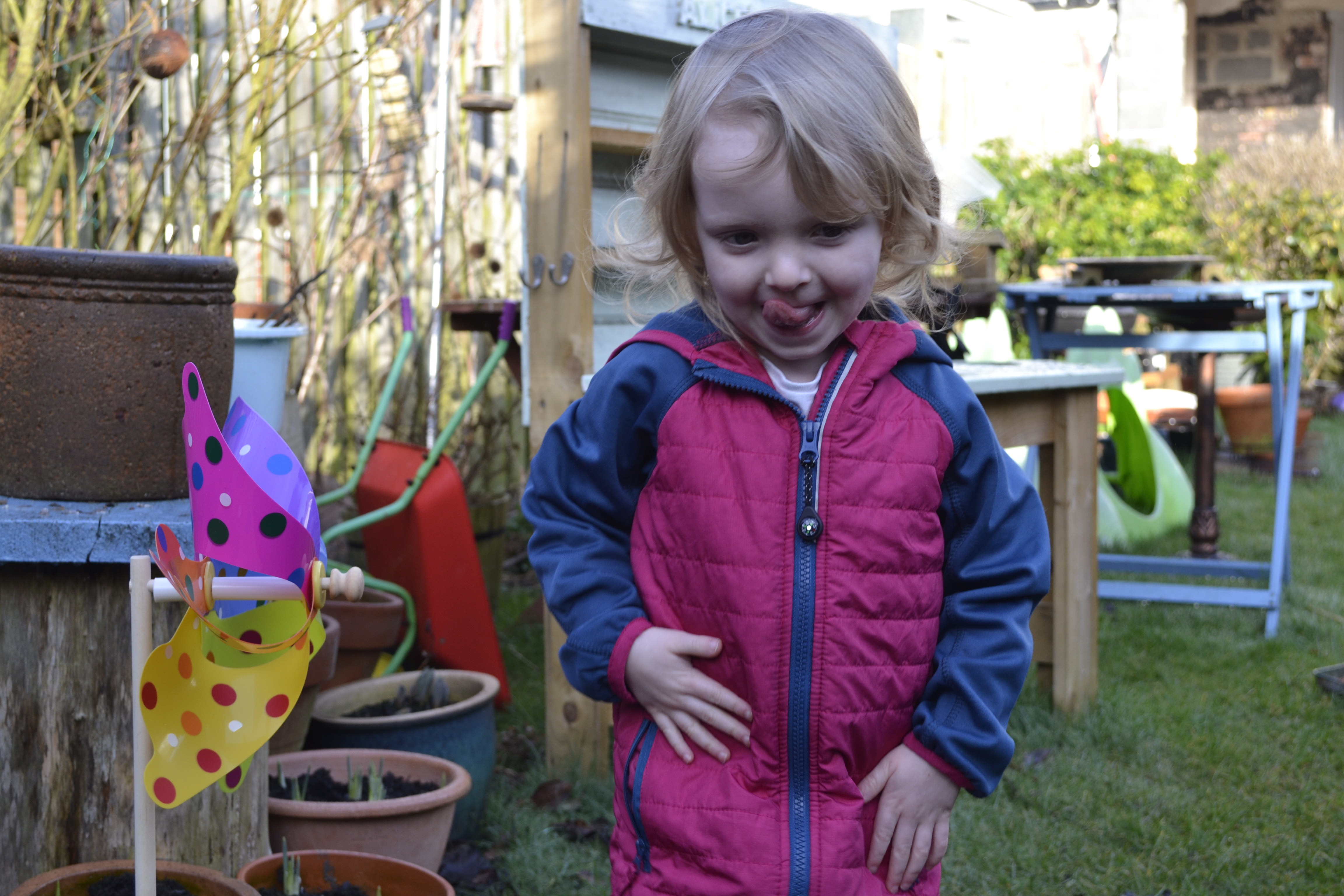 While scything down the perennials I found this good sized frog. I’ve started seeing them more and more. It’s good to know they are returning to the garden ready for defending my hostas from slug attacks. 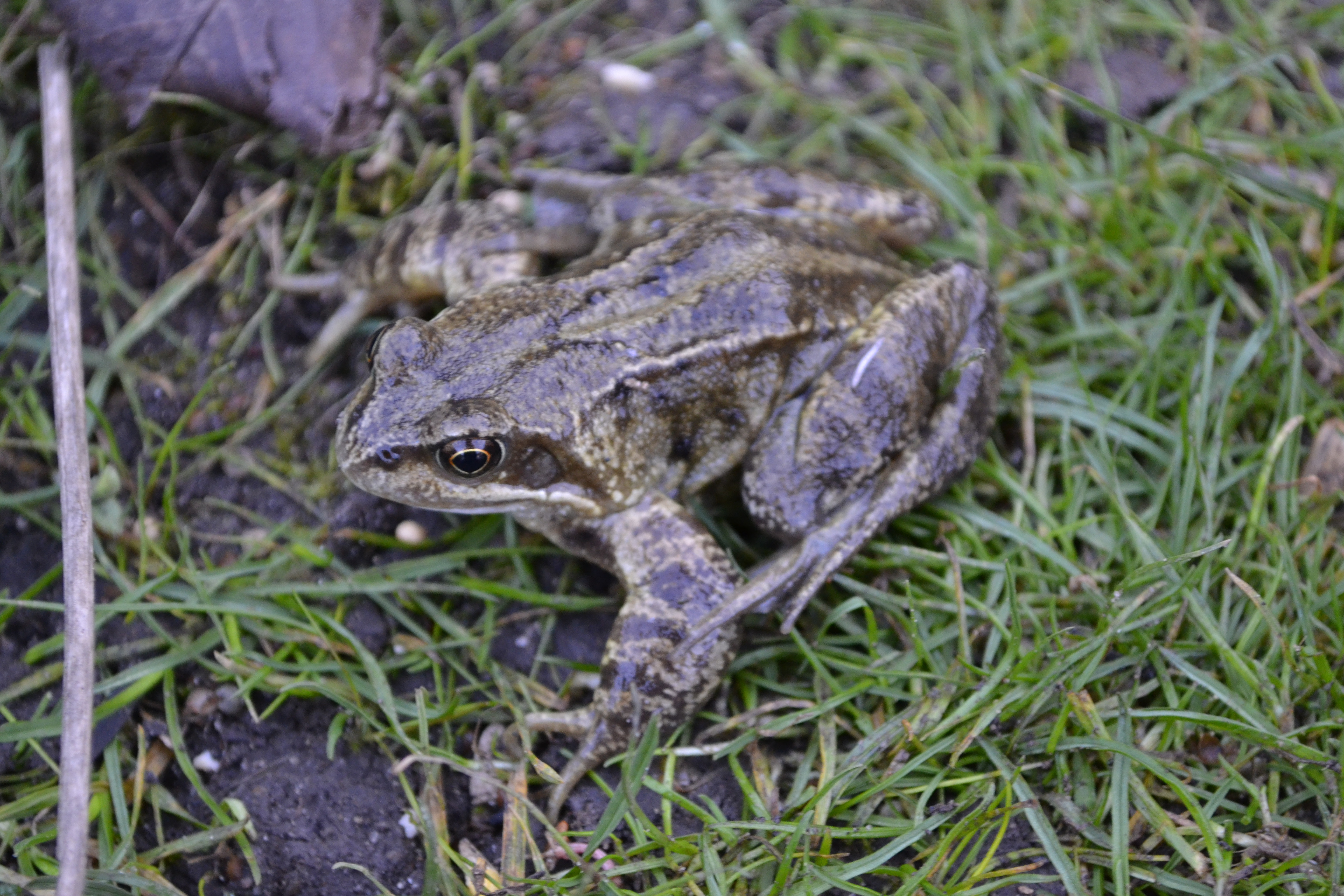 Looking back I realise this was quite a long six but I hope you enjoyed. Enjoy your weekends. I have euonymus to trim next and a dwarf apple tree that is too dwarf. Happy gardening!

If you want to take part in six on Saturday then check out the guide.

Yesterday saw us getting out. As mentioned in a previous post we are having a wood burning stove fitted. This left us confined largely to the kitchen with Alice staring out the window, though she does like playing in the corner by the French windows.

We had an invite to join one of Amy’s sisters taking the other sister’s girls out to The Deep. For those who don’t know The Deep is one of the UK’s largest aquariums and was one of the few successful millennium projects, the others largely being abysmal failures. Amy’s brother in law works there, which will give Alice a bit more insight into it as she gets older. I used to go with nephews a lot and they would happily sit watching the tanks for long stretches. It’s a super day out and has had more added since I last visited.

The first tank you come to, the lagoon, has been refurbished with more interest added above the water. It’s looking good for it. Amy’s sister informed me that the leaves were individually attached on by a lady who worked on set design on star wars. Now there is an interesting CV.

Alice had a peer at the fish, but at this point she’s more interested in the people around her.

Recently Alice watched through Finding Dory with Amy. It was one of the first movies where she’s sat and watched for periods, so it was nice to see some dories.

The family watching the tank.

We arrived at the penguins in time to see feeding time. Alice quite liked the penguins when we’ve sat watching Attenborough, but she was more interested in the people round her.

Further round you can see them swimming under the water, but yesterday they were all stood on the side.

Since I last visited the sea turtles have been introduced. They are pretty spectacular seeing them swim right up the tanks glass. Well worth a return visit to see.

Along the stretch between the two main viewing windows are several of my favourite tanks, not containing fish. Most people flock at this point to the clown fish of finding Nemo fame, but personally I like the tree frogs.

Further round there are more frogs, leaf cutter ants, hissing cockroaches, snakes and millipedes. In the centre of this section is a soft play area giving the girls a chance to bounce around. Sadly the hissing cockroaches are sealed in, so no hearing the hissing. I enjoyed watching the leaf ants at work, fascinating creatures. Having recently revisited a number of the evolutionist E O Wilson, whose speciality is ants, I’ve had a renewed interest in them. However they don’t photo well. These tanks of amphibians, reptiles and mini beasts are mainly looked in briefly by children and adults as they realise it takes effort to actually spot anything in the tanks, but it’s worth a bit of patience to see the occupants.

I did however manage the green and black arrow frogs and the milk frog. The arrow frogs are pretty well known. The milk frog is a species from the Amazon rain forest. The name milk comes from the fluid they excrete when stressed rather than their colour. They apparently make quite good pets, but need a big tank.

Towards the end is the tunnel allowing you to see into the main tank. It was here we went for the family shot.

Me, Alice and Amy said our goodbyes to the others as we wanted to go see the Weeping Window Poppy display. We have previously seen the poppies down in London, but wanted to see them again installed in Hull.

It’s a rather pretty tribute to the soldiers of the war. One of the aims of the piece is to open up dialogue about the events of WWI, which currently seems like a relevant subject as we seem set to repeat mistakes. I hope Alice doesn’t find herself living through events as tragic.

However she seemed happy to be out and about again after being inside The Deep.

Just down the road is another flower display, but this time made from lego. This is featuring as part of the city of culture instalments.

We decided to finish off with tea out to avoid traffic, so headed to Ask as we know the pram can fit in and it has suitable baby chairs. Alice discovered dairylea dunkers.

A nice day out avoiding the chaos at home.