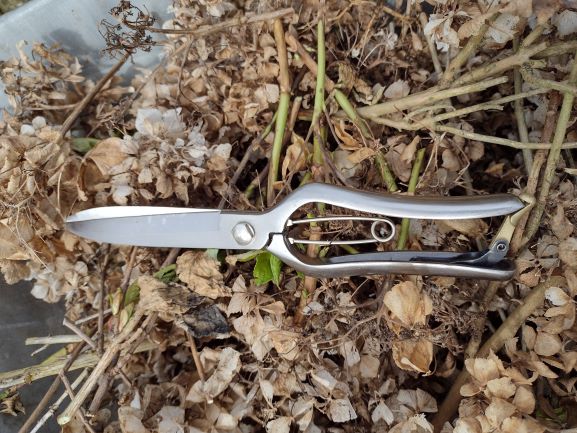 It’s been a busy week at work. Just one more week to go until the holiday and then I’m doing a few more hours after the holiday. But I’ll at least have some time to catch up on garden jobs. Last weekend I tackled two of the hydrangeas. These are Hydrangea Macrophylla, generally referred to as mopheads.

I bought these a while back as a reward for my RHS exam. They are beautiful to use. They are a bit bigger than secateurs. But they can still be used in one hand like scissors making them perfect for jobs like the hydrangea where I want to move branches with one hand and cut with the other. 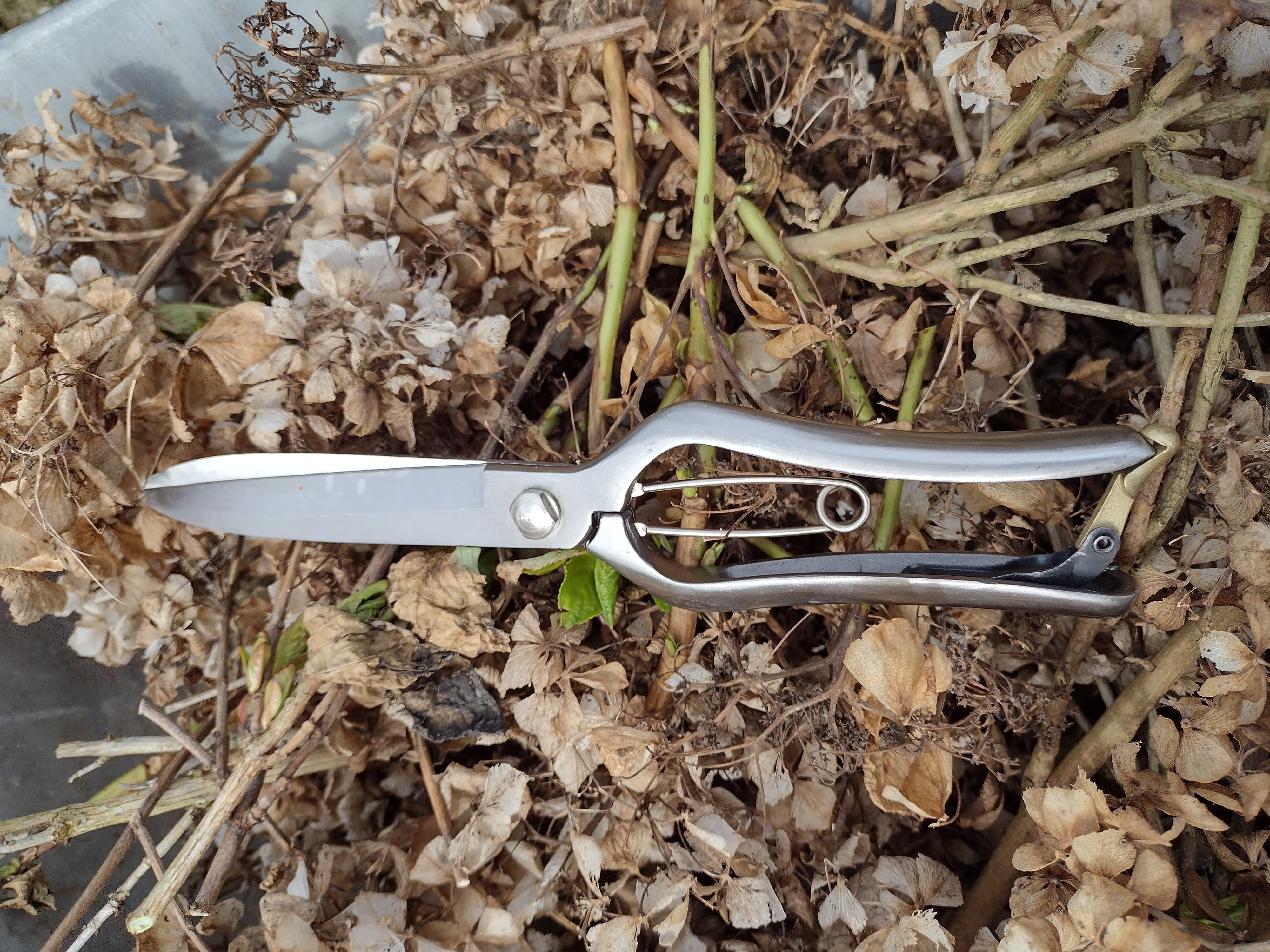 The aim of the pruning is to cut back the flowerhead. I’m aiming to go back from the flowerhead to a new set of leaves. The flowerheads stay on over winter to offer some frost protection but cutting them off frees up space and encourages more flowering stems. 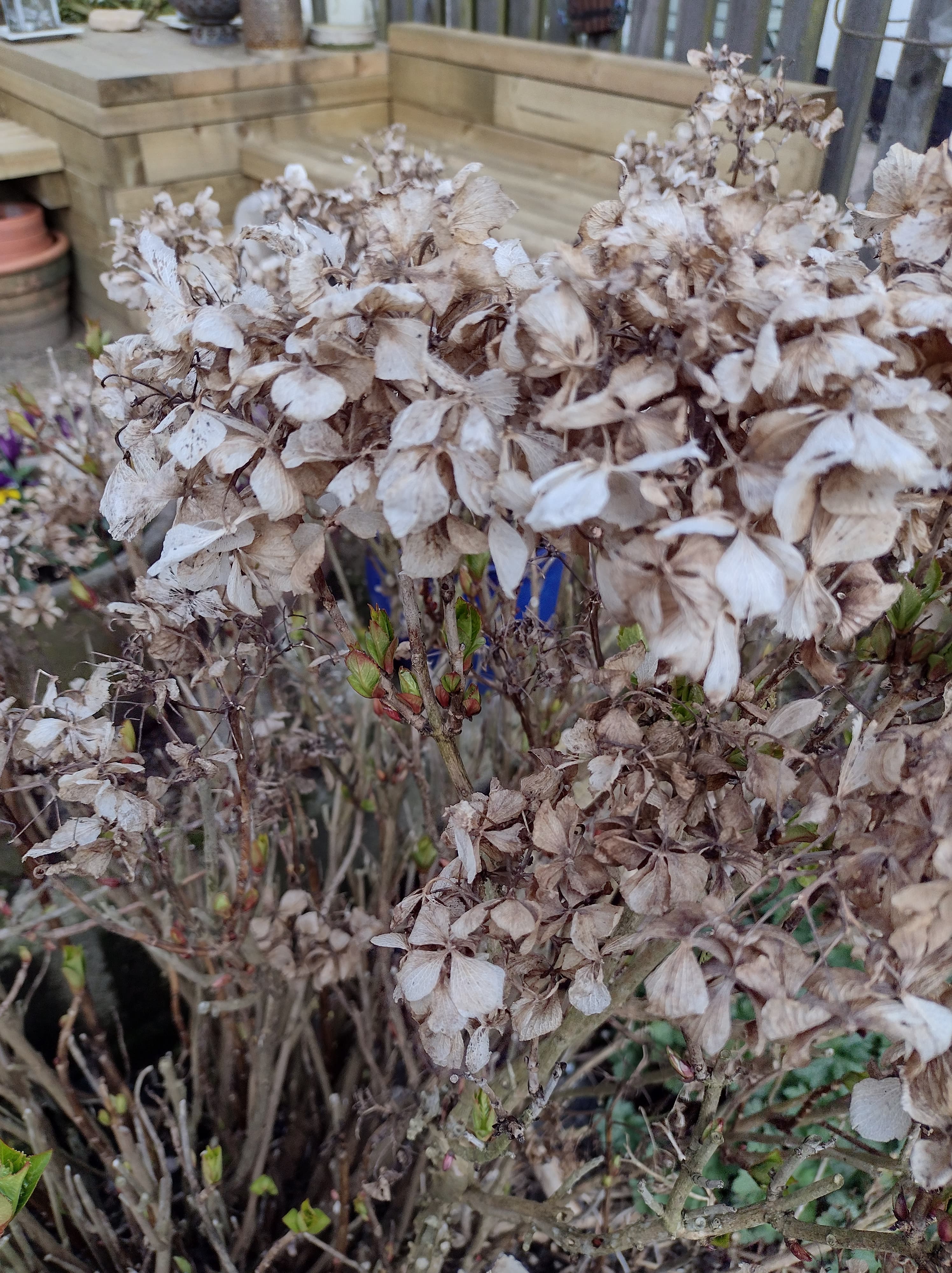 When you look into the crown there are usually some dead branches with no new buds forming. I also prune out some of the overlaps where it is too heavily congested. This encourages a bit of airflow to reduce some of the diseases, mainly fungal that can affect the hydrangeas. Doing this each year with the older stems encourages continual fresh growth from the base of the plant. 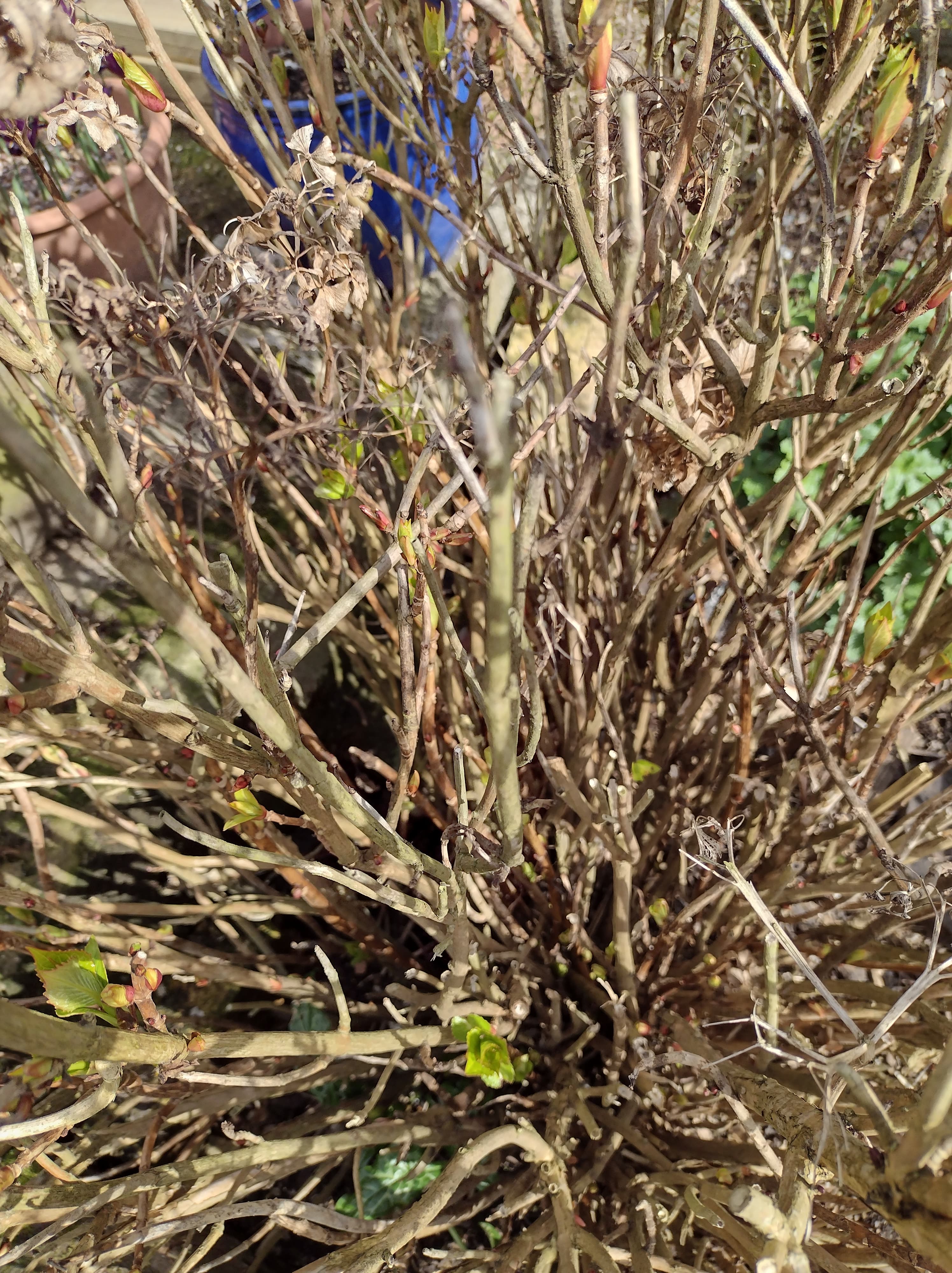 Not the best pic, but here you can see the blurry mophead. If you look along the stem you can see the new leaves are quite far back so the pruning goes back to this point. This is lower down on the plant where I also try to keep a bit of space around the ground. There are two hydrangeas opposite each other on either side of the path so I try to keep them roughly symmetrical. 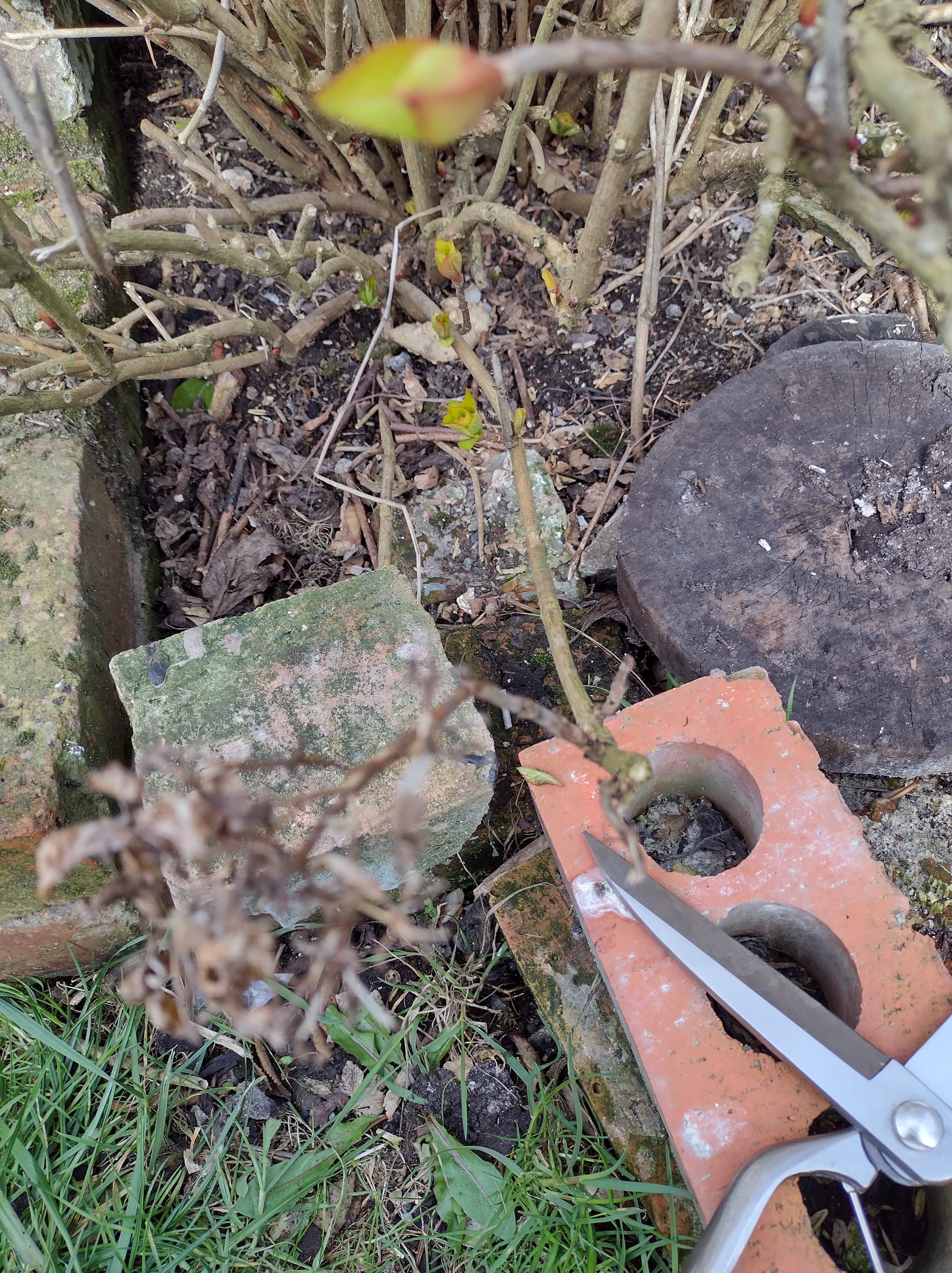 Then there are some branches growing out on their own that ruin the shape of the plant, cover the path or the patio have to go. I often do the job and come back a few days later to check where I’ve missed. If you do have one that has grown too big for its space you can cut back hard and they will come back but you may lose a year of flowering. 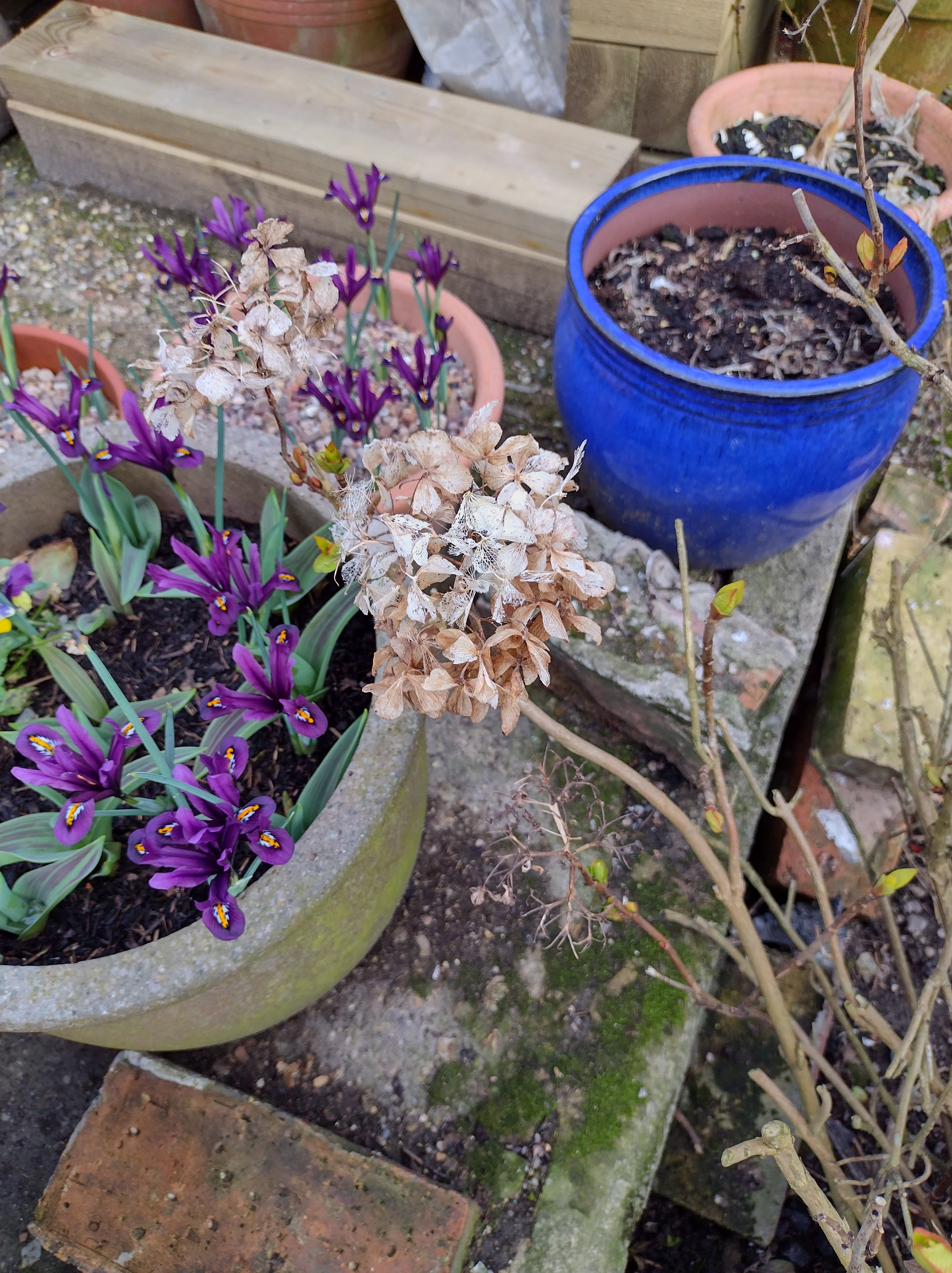 The Iris reticulata ‘George’ from last week sneaking in again in the background of the last photo. They are now in full bloom and making a good impact. 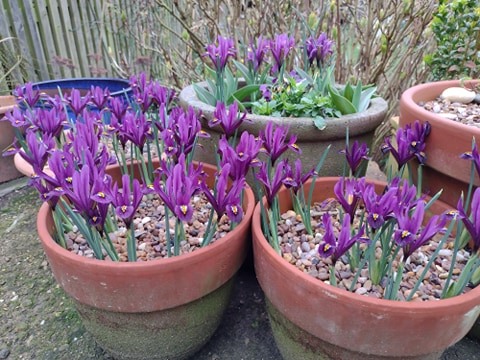 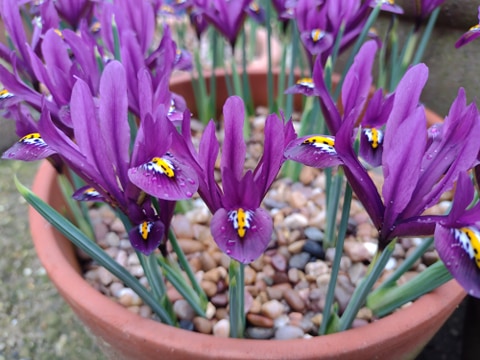 Most of the crocus in the lawn are single colours but this one has some stripes making it stand out. 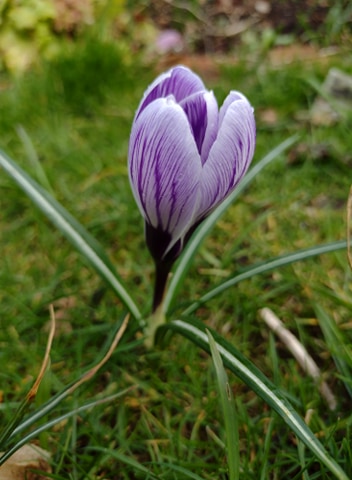 Hope you found today’s blog useful. I still have the Hydrangea paniculata to do which are slightly different in that they can be harder pruned. Enjoy your weekends.