It is half term for us. Sadly Hornsea is facing rising cases of Covid. We are not on full lockdown but many of our friends and family are having to isolate so many of our half term plans have been thrown off. We are trying to be careful so we are avoiding contact with people where we can and trying to plan safer activities. Yesterday, we watched Tall stories livestream of Julia Donaldson’s snail and the whale. We saw the Gruffalo last year when theatres were still an option and it was fabulous. A livestream doesn’t quite give the same experience as the theatre so I wanted to create a bit of excitement around it so Alice didn’t just think we were watching a normal TV show. It is shown from London but each showing is done in collaboration with a different theatre It seems like a good way to support theatre during these difficult times for the arts.

For those of you who don’t know, the snail and the whale is a lovely story written by Julia Donaldosn and illustrated by Axel Scheffler. It tells the story of a tiny snail who wants to see the world. It hitches a lift on the tale of the whale and travels around the world. The story ends with the snail saving the whale. Despite its size it can still help the bigger whale. It has a slower pace than her more famous books like the Gruffalo but I think it has a rather nice mindfullness about it. The TV version particular exemplifies this with beautiful scenes like something from a David Attenborough documentary. The ‘Save the whale’ part of the story is a bit of a Greenpeace blast from the past but it is a story filled with positive messages for children.

After she’d gone to sleep on Sunday I set up a trail of small world trays with scenes from the story around the house for Alice to discover when she woke up. I started with the snails black rock with the message from the story, “Lift wanted around the world”. 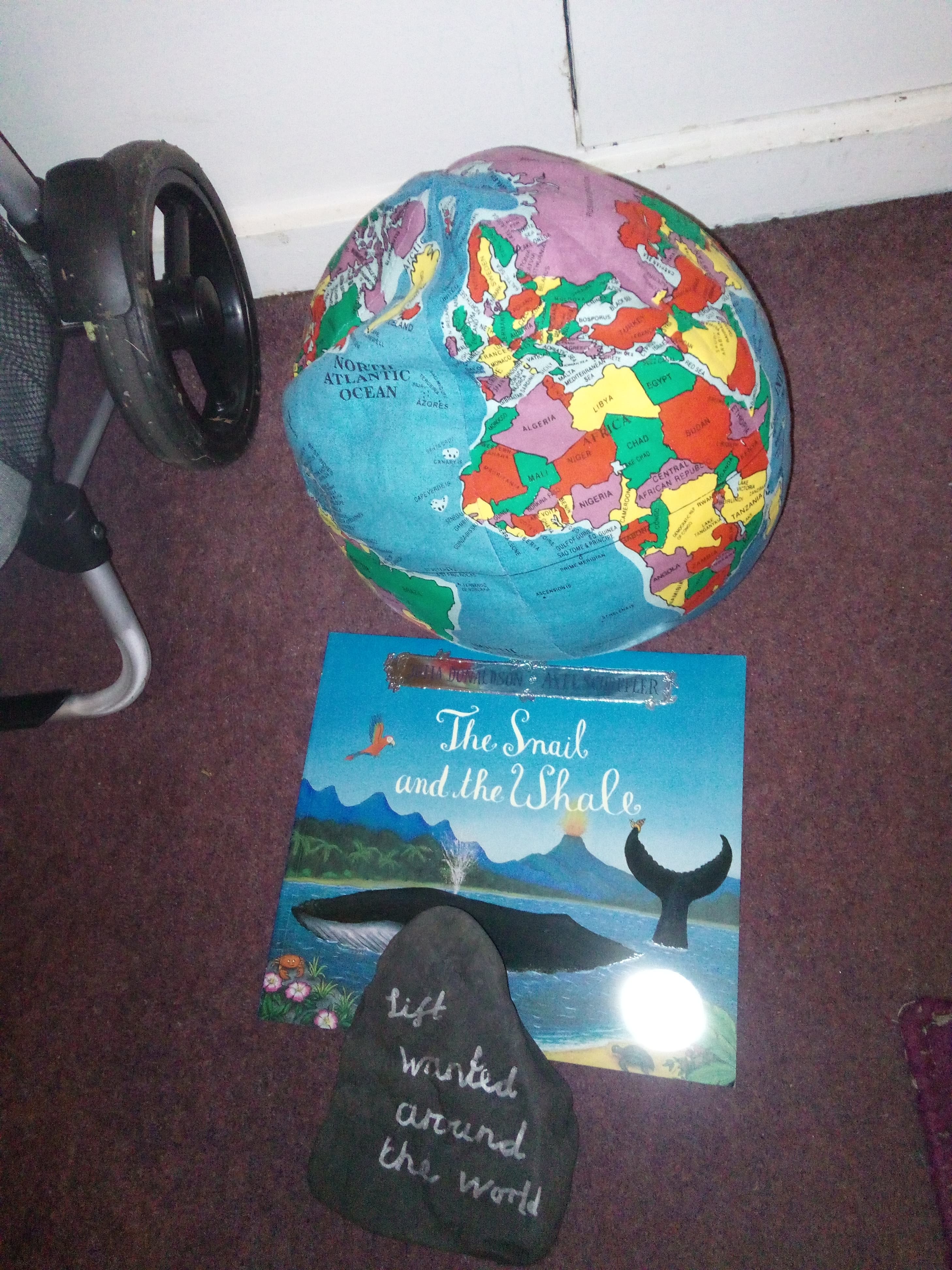 Then a little further down the hallway we had the Antartic scene. A planting tray, a sheet of card with circles of white paper made up our Antartic scene. I thought we had lots more penguins but sadly not. Though oddly Alice keeps going back to this one. 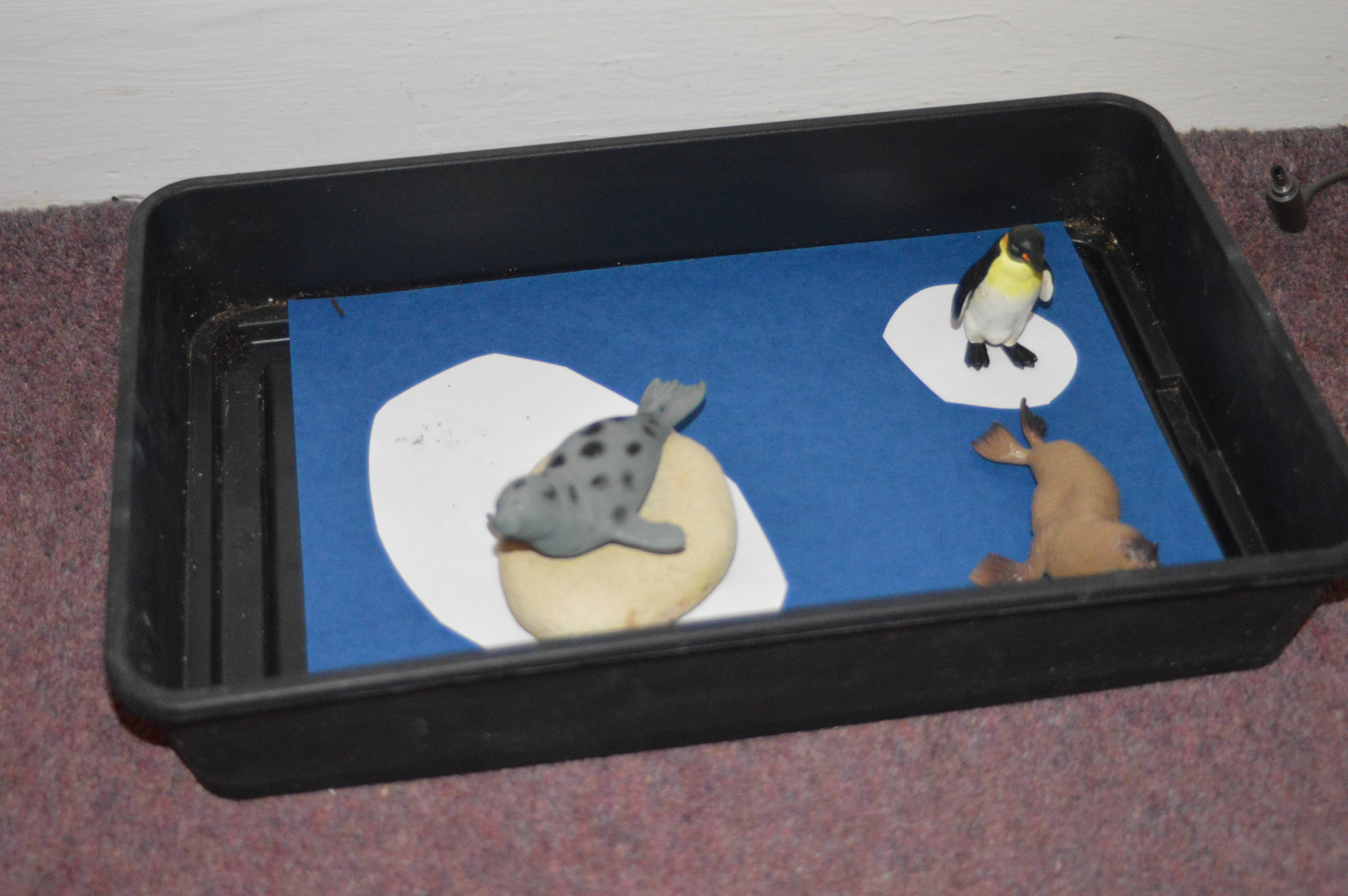 A few logs, the bears and an eagle made up the next scene. 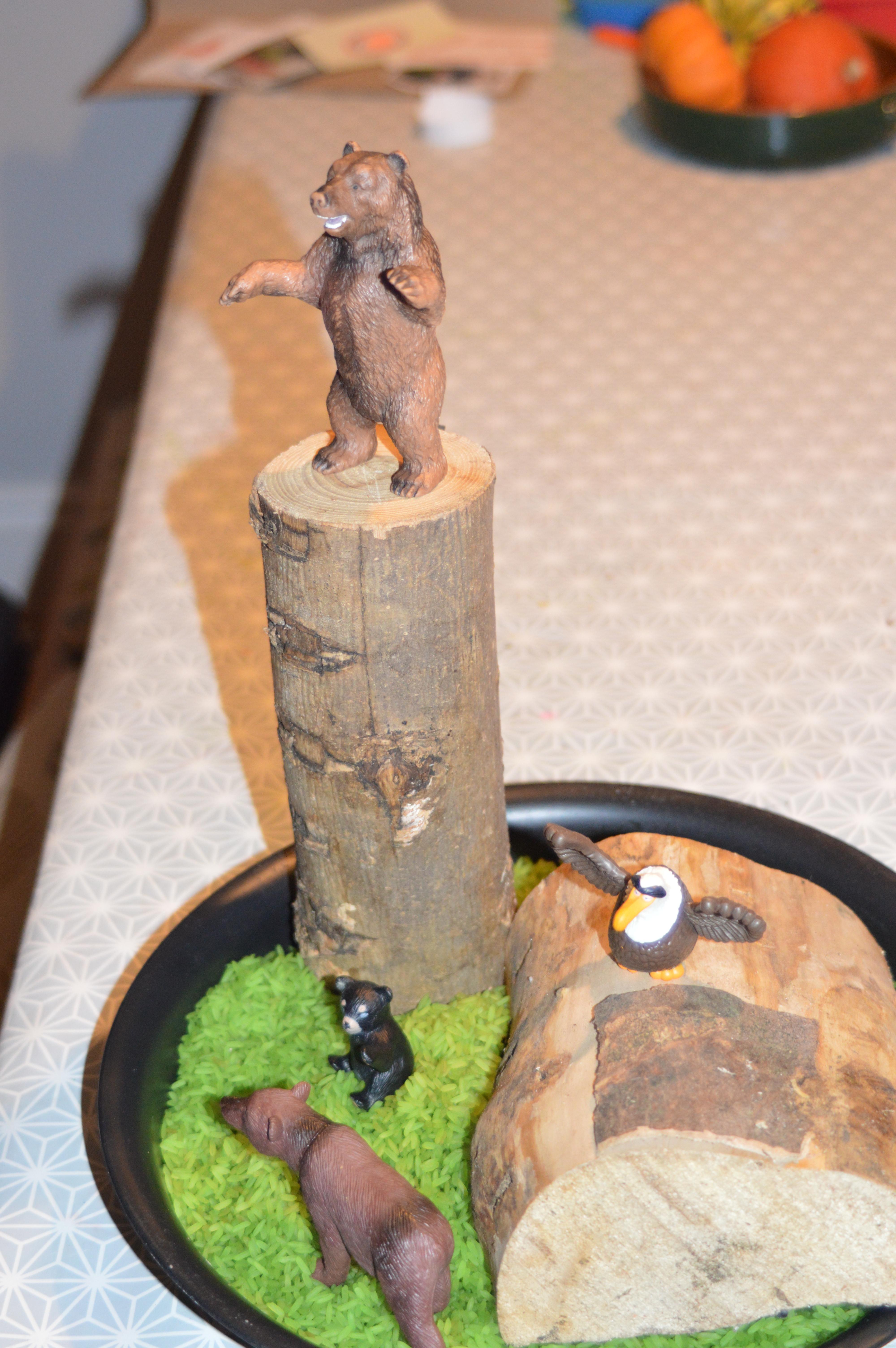 The volcano and beach was made with coloured rice and rocks. The rice is coloured by putting rice in a tuppaware box and adding a few drops of food colouring and a spoon of vinegar. Shake the box and then let the rice dry. The animals came from the charity shop a while back, though she’s never played with them that much. Now she has a story that goes with them she has enjoyed them more. 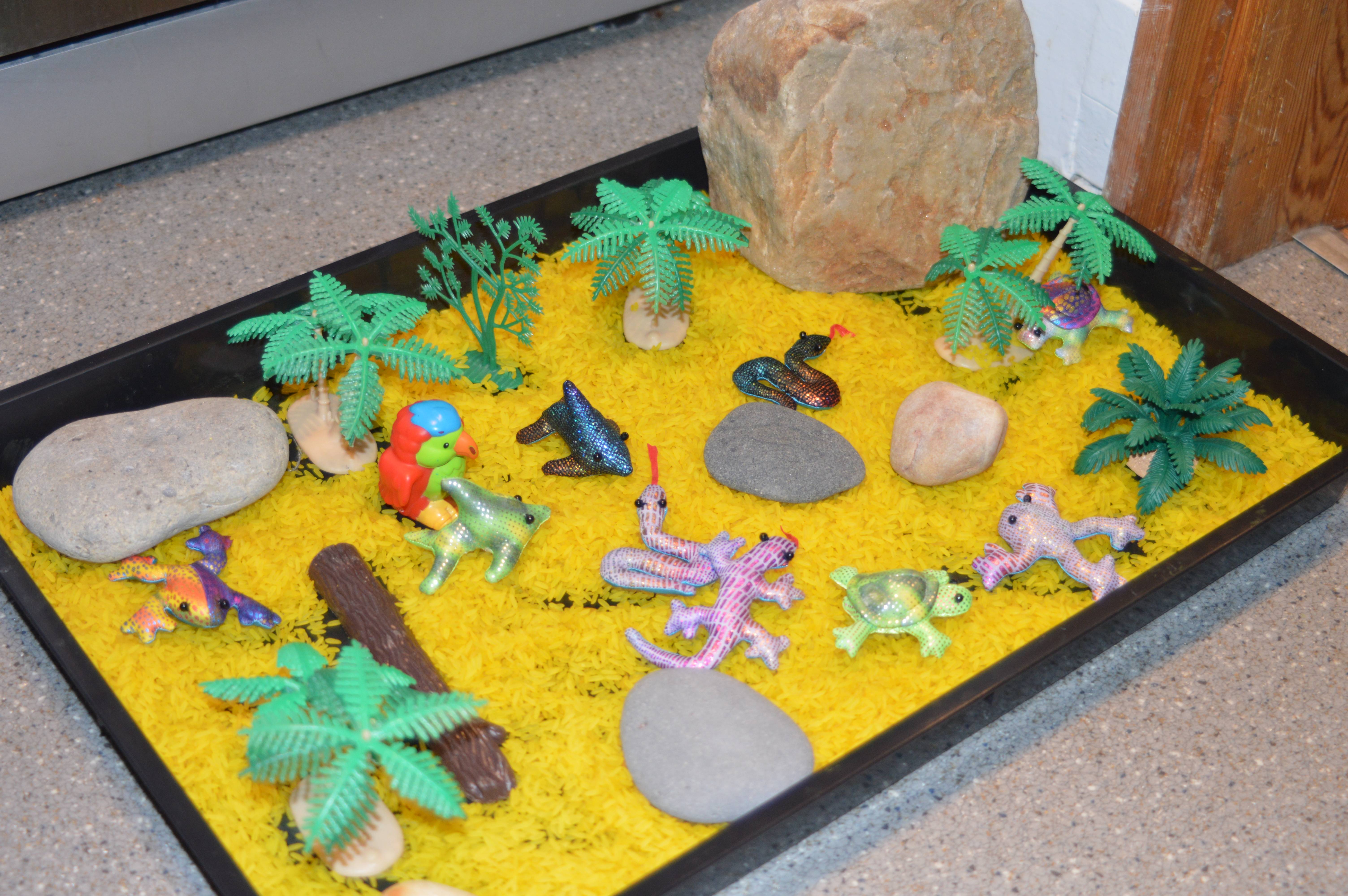 Then a water tray made from a storage box filled with water and Alice’s bath toys. 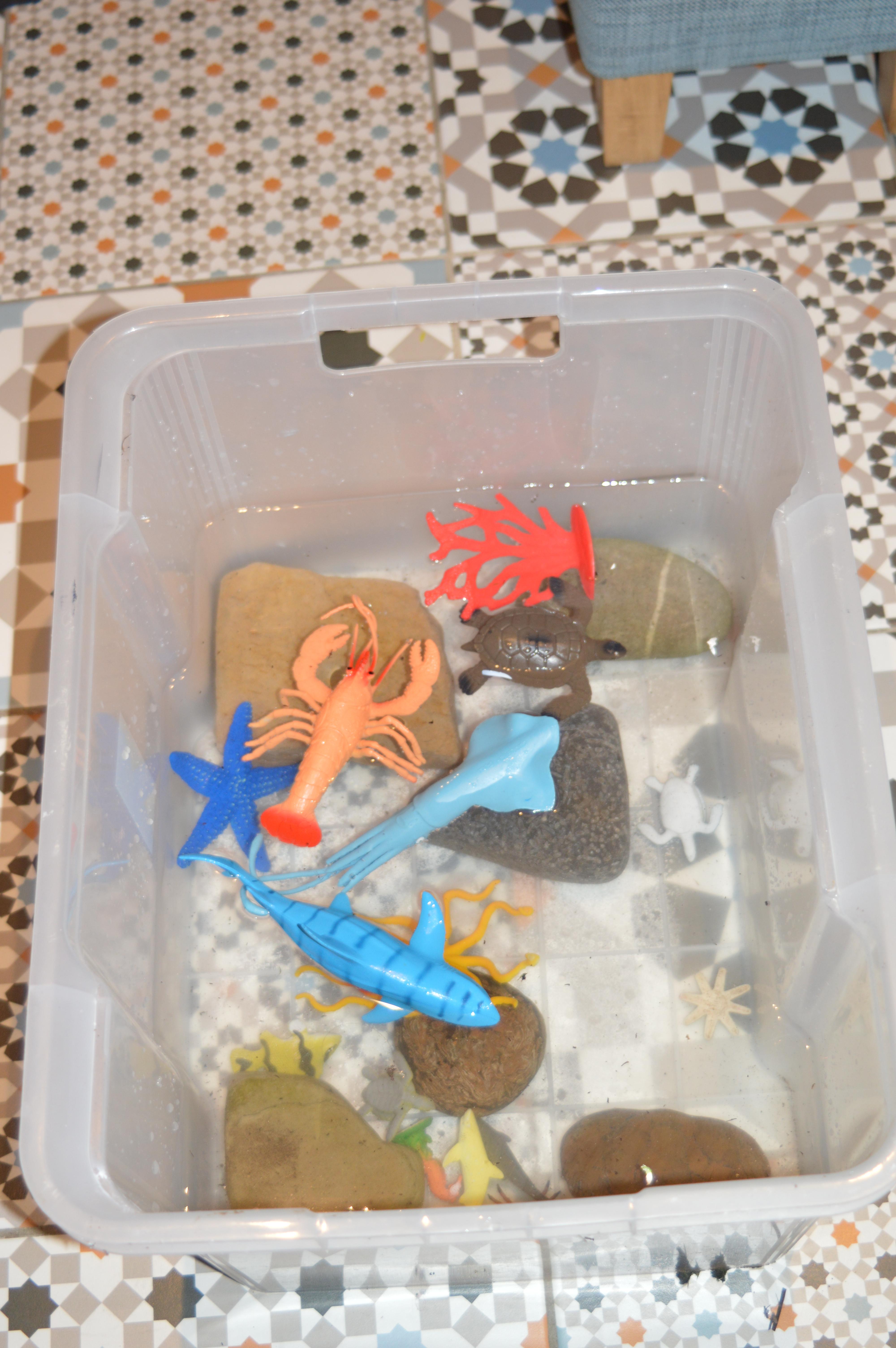 The trail then led her to an invite to the theatre show and a new toy. Since we didn’t have to travel this theatre trip was saving us lots of money in parking costs, drinks, ice-cream, etc so I thought we could justify a speacial treat to mark the occasion. 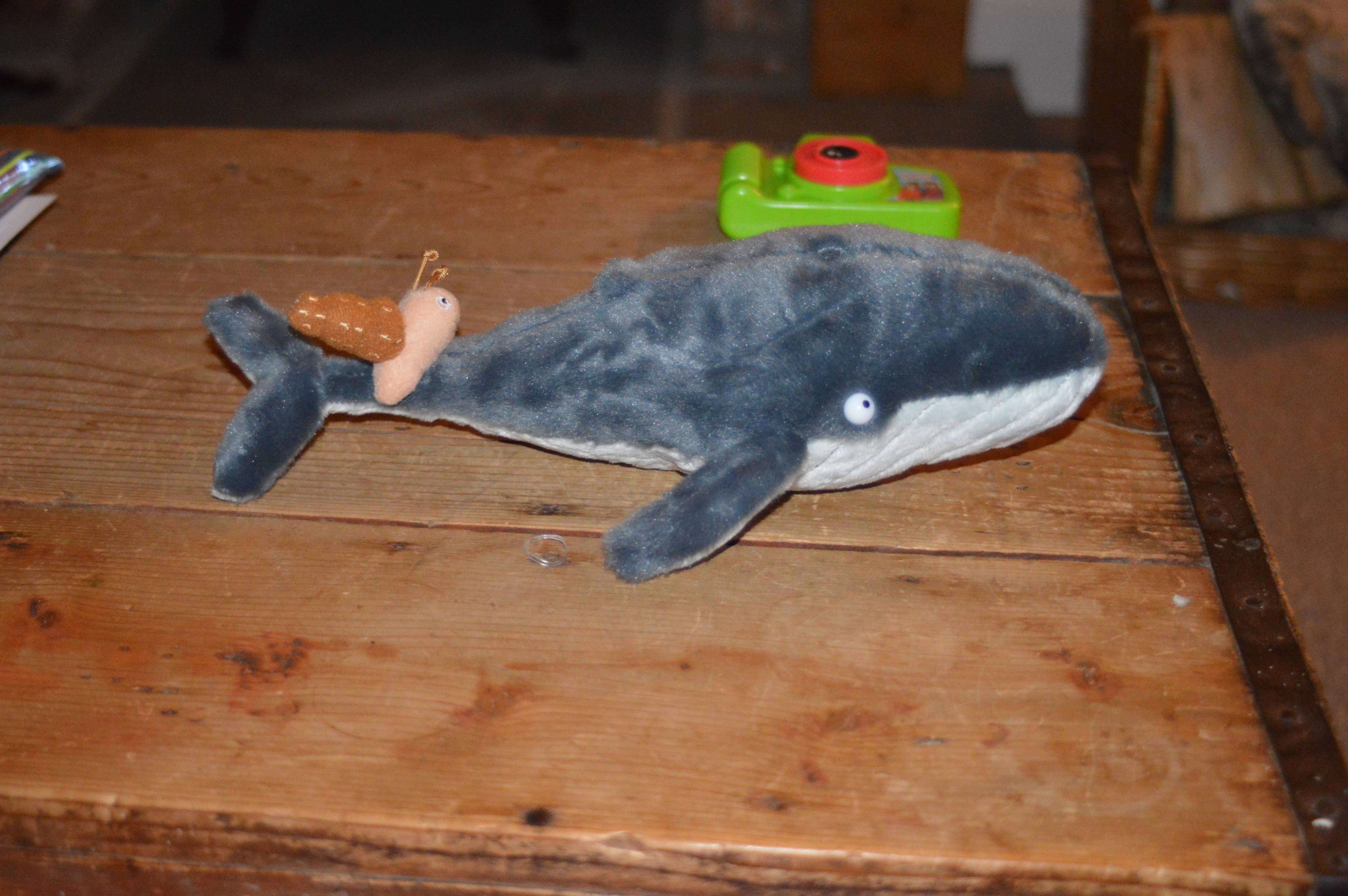 She loved doing the trail and carried on acting out the story through the morning and making some of her own. 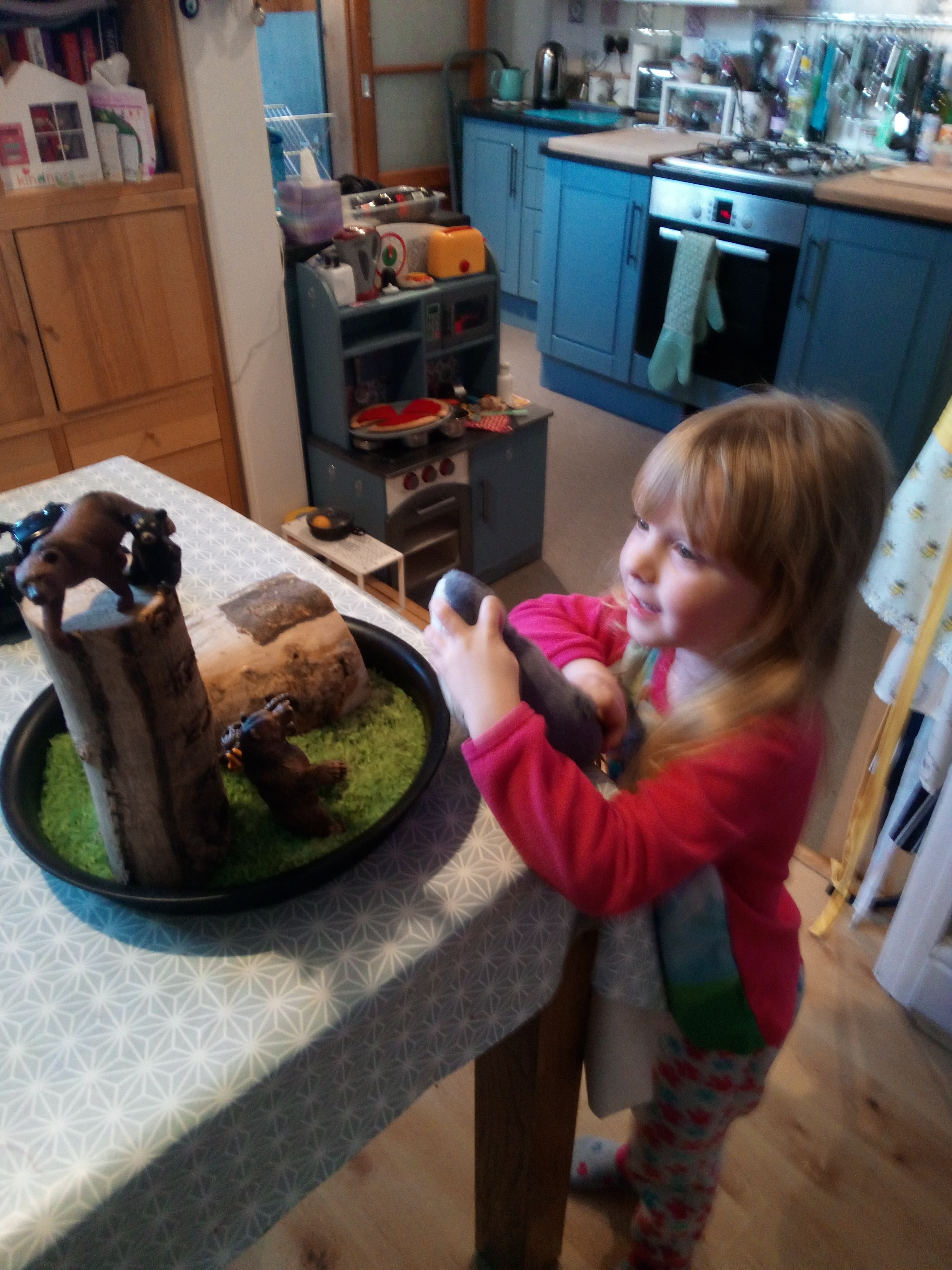 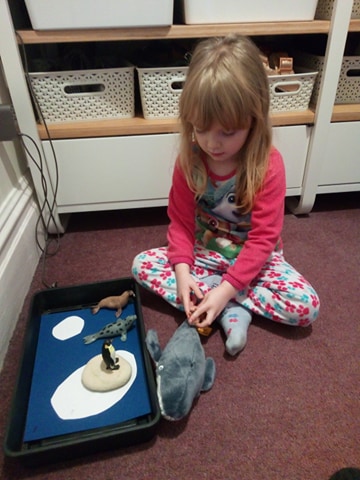 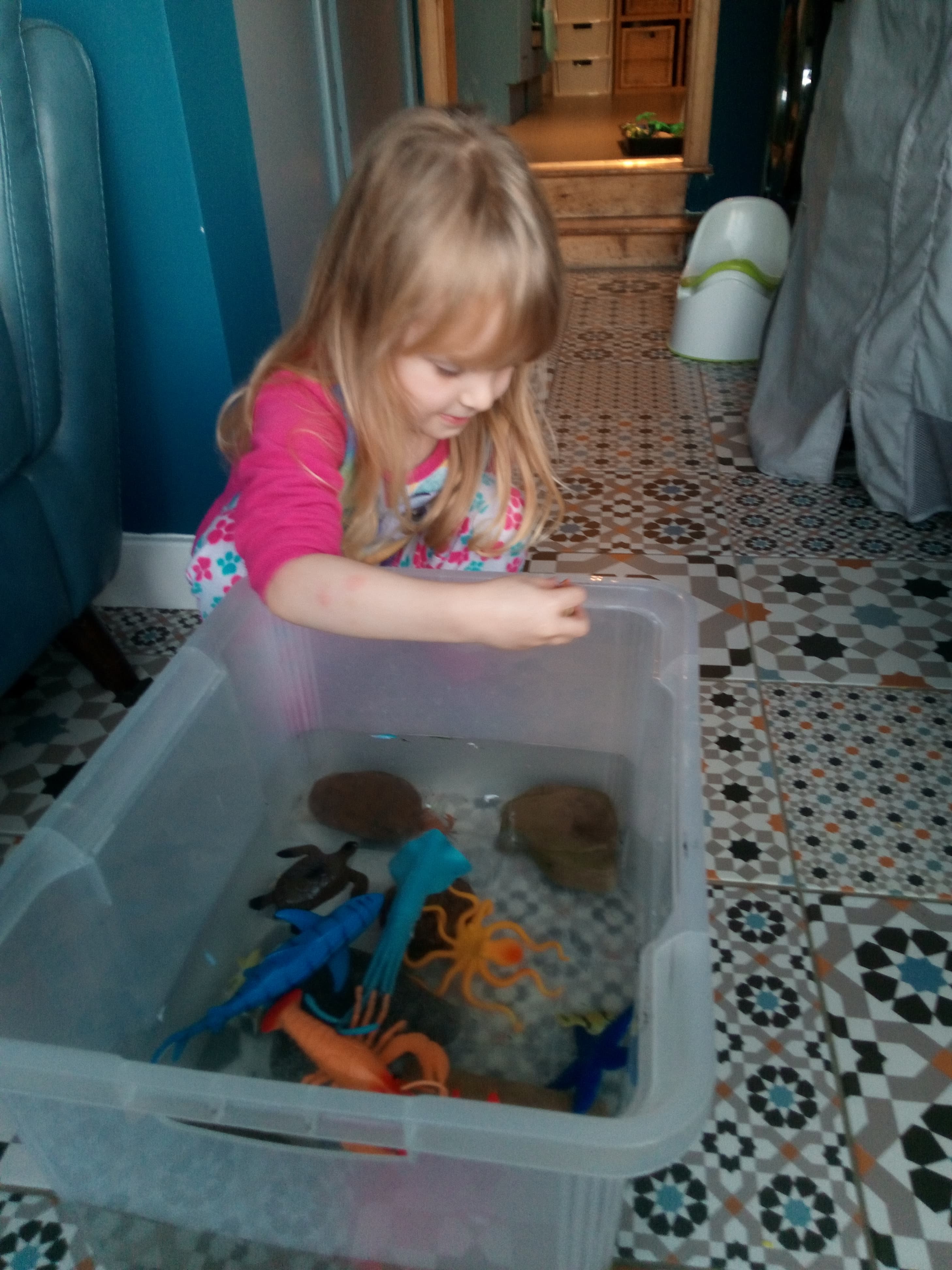 We got dressed up for the occasion as it seemed like the right thing to do despite not leaving the house. 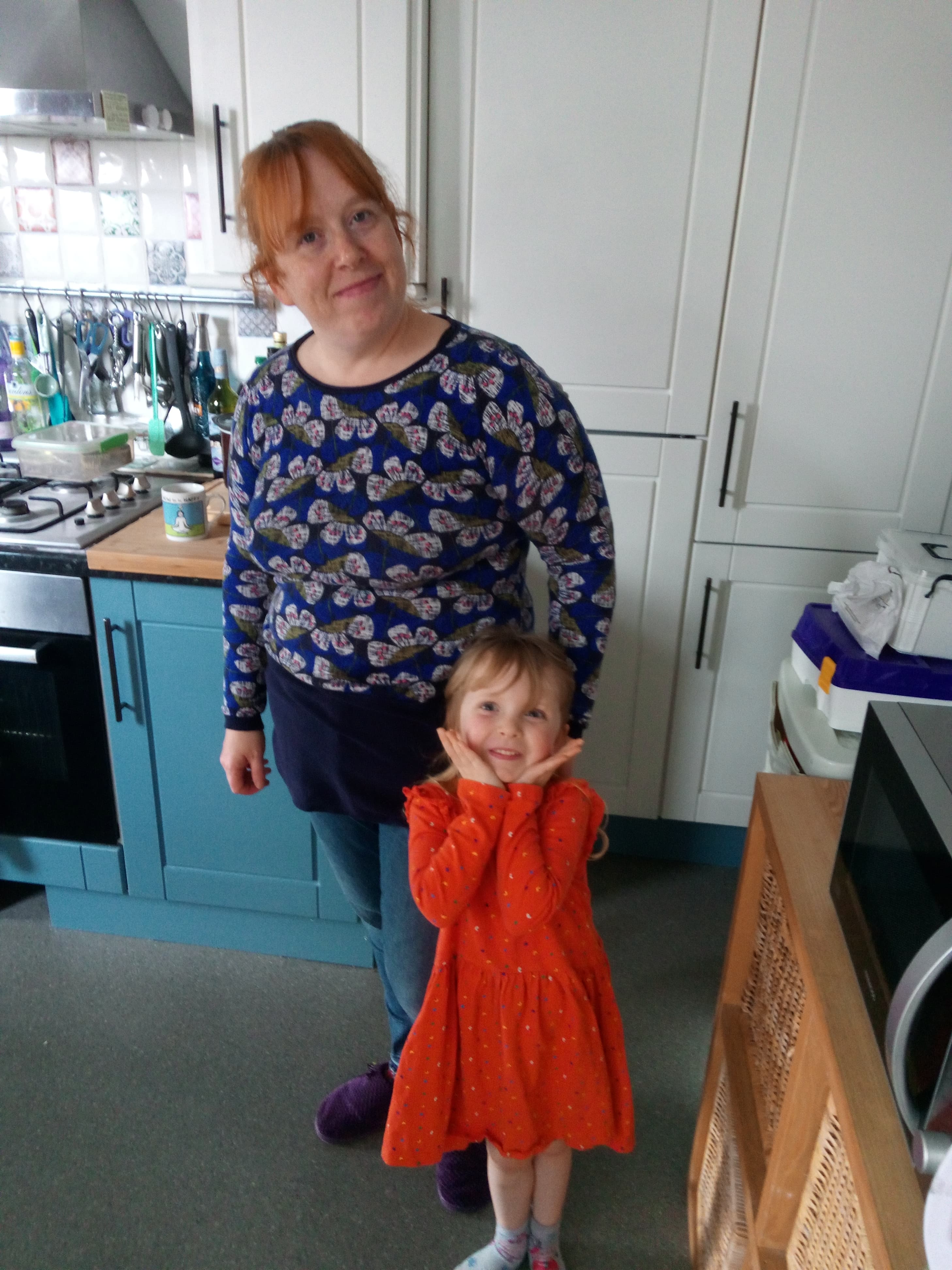 And then settled into watch the show. Alice loved the show giggling along at the jokes. Sadly our internet cut us off about 5/10 minutes before the end, but luckily she knows the story well enough that she acted out the rest with her toy and the trays I’d prepared. There are a few activities Tall Stories have created online which we may try over the week. The theatre show tells the story from the perspective of a daughter and dad telling the story of the snail and the whale as a bedtime story. It’s sweet and funny and acomponied pleasantly by music on the viola. 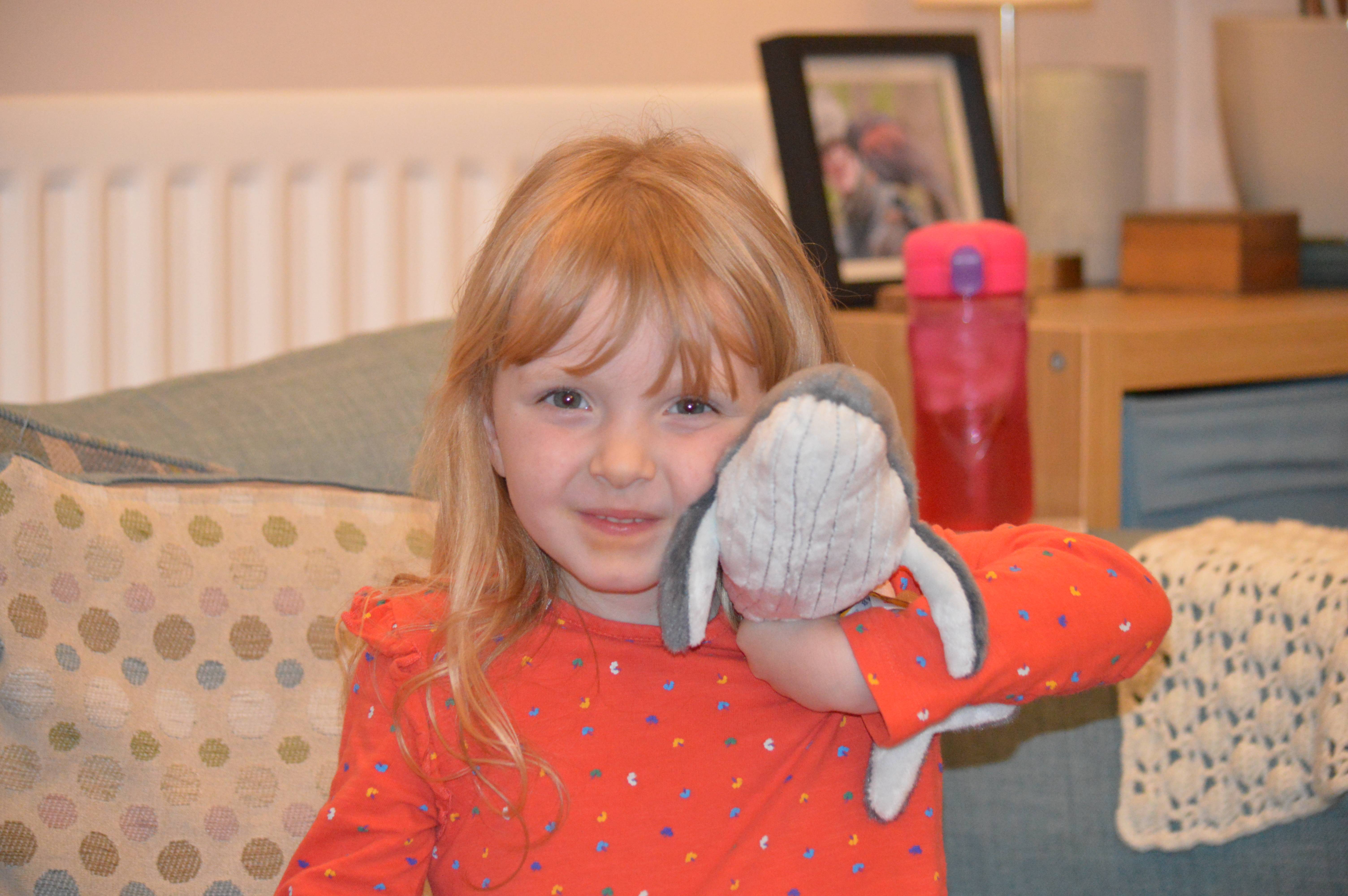 Tall Stories have more broadcasts of the show over the rest of the month. It’s only £10 so cheaper than actually going out to the theatre and if you have little ones at home and are stuck for ideas for things to do in this strange Covid environment this is a great option. Alice has asked to act out the story again today so I think that’s a sign that she probably enjoyed it. We ended up watching the BBC snail and the whale adaptation too. It provided a good days entertainment and I have a few follow up ideas for over the week. Well worth checking out!