Today we headed out to Wassand Hall. I haven’t been to the gardens for two years and never in high summer. The whole set up is pretty much outside so Corona precautions are pretty straightforward and social distancing is easy enough. There were a few other people checking out the gardens but it was easy enough staying apart. Alice’s leg is still hurting so we didn’t want to take her for a day out which was going to strain her too much. The gardens here are not massive so we thought this would be about right.

The walled gardens are largely in three sections. One part is a run of formal box hedges with perennials growing inside. This was mainly heuchera, salvias and hostas currently. 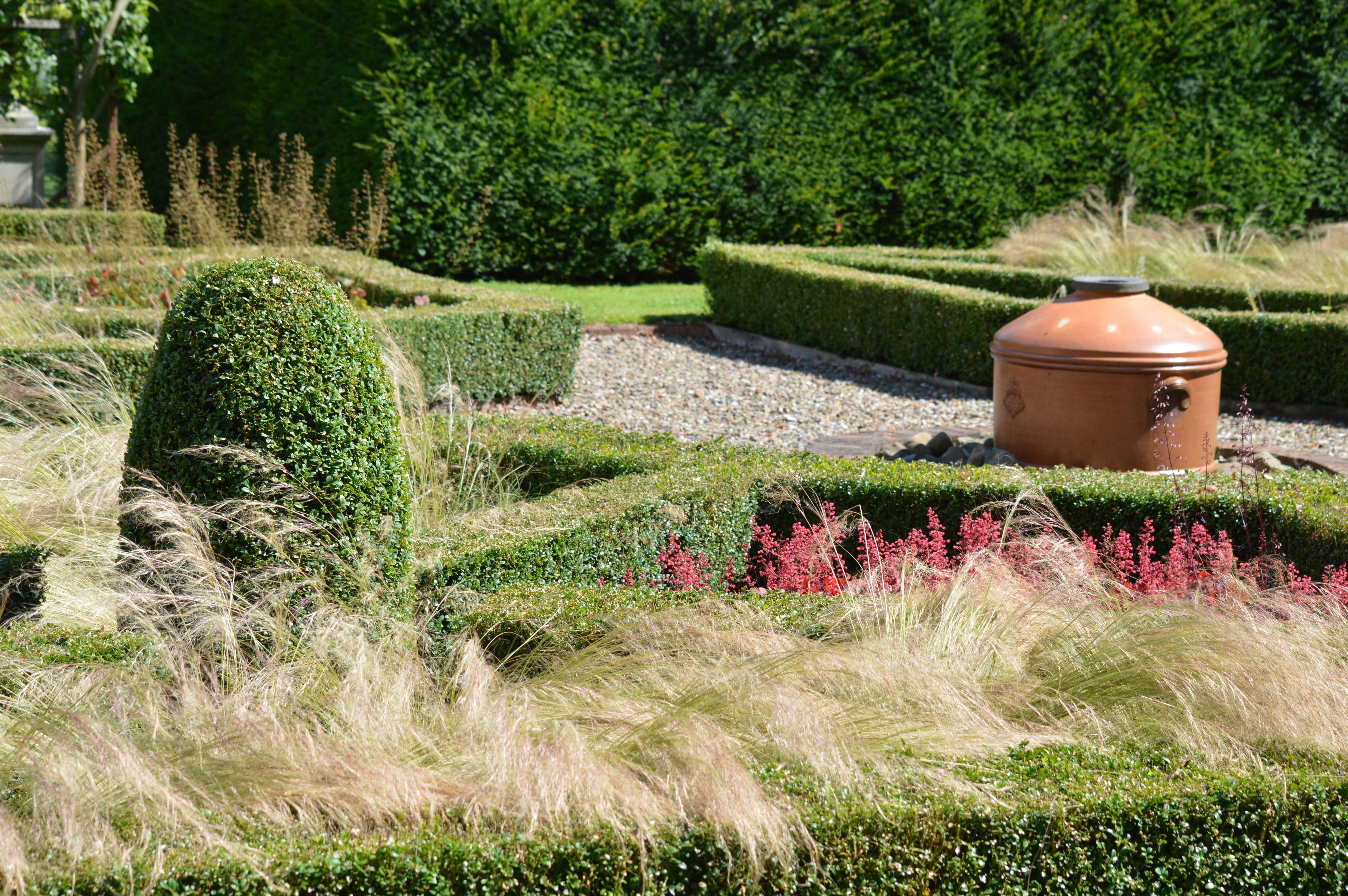 A small fountain fills one wall. 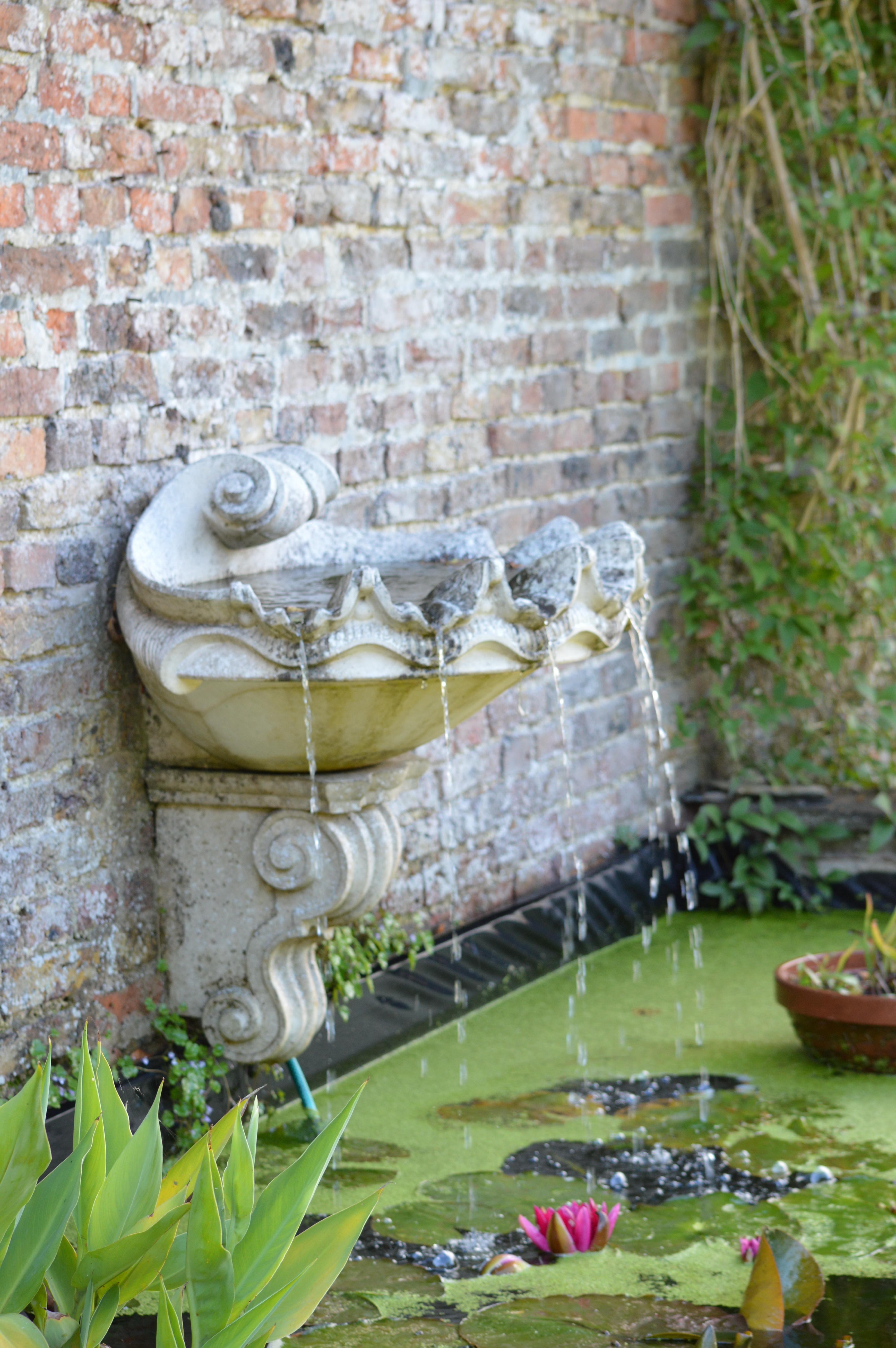 With some stunning water lilies. 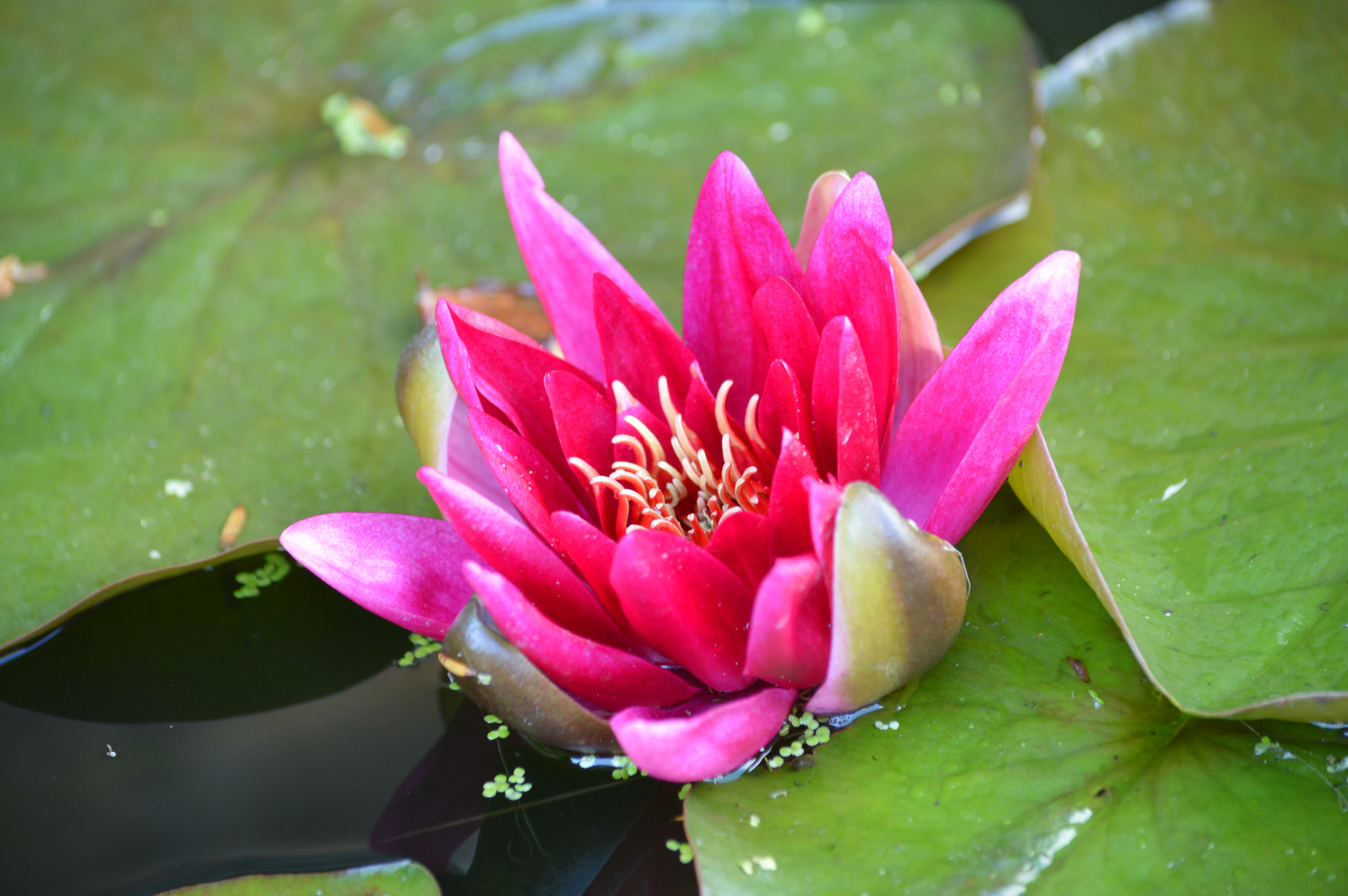 A climbing hydrangea Seemannii is spilling over one wall. This a different version to the one I grow as this one is supposedly evergreen. Either way, it has been allowed to romp away and is spectacular for it. 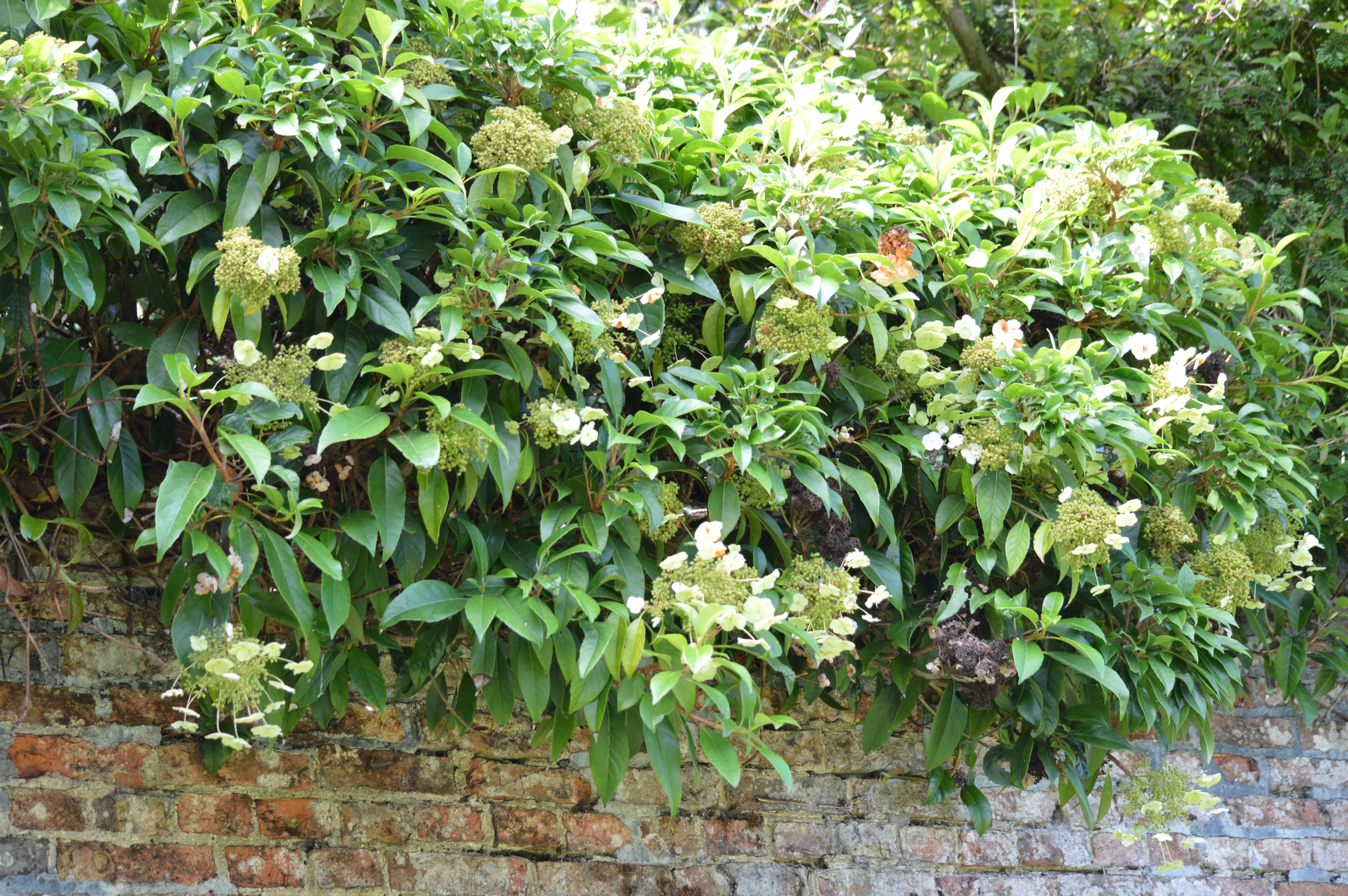 A formal pond fills the middle of this section. 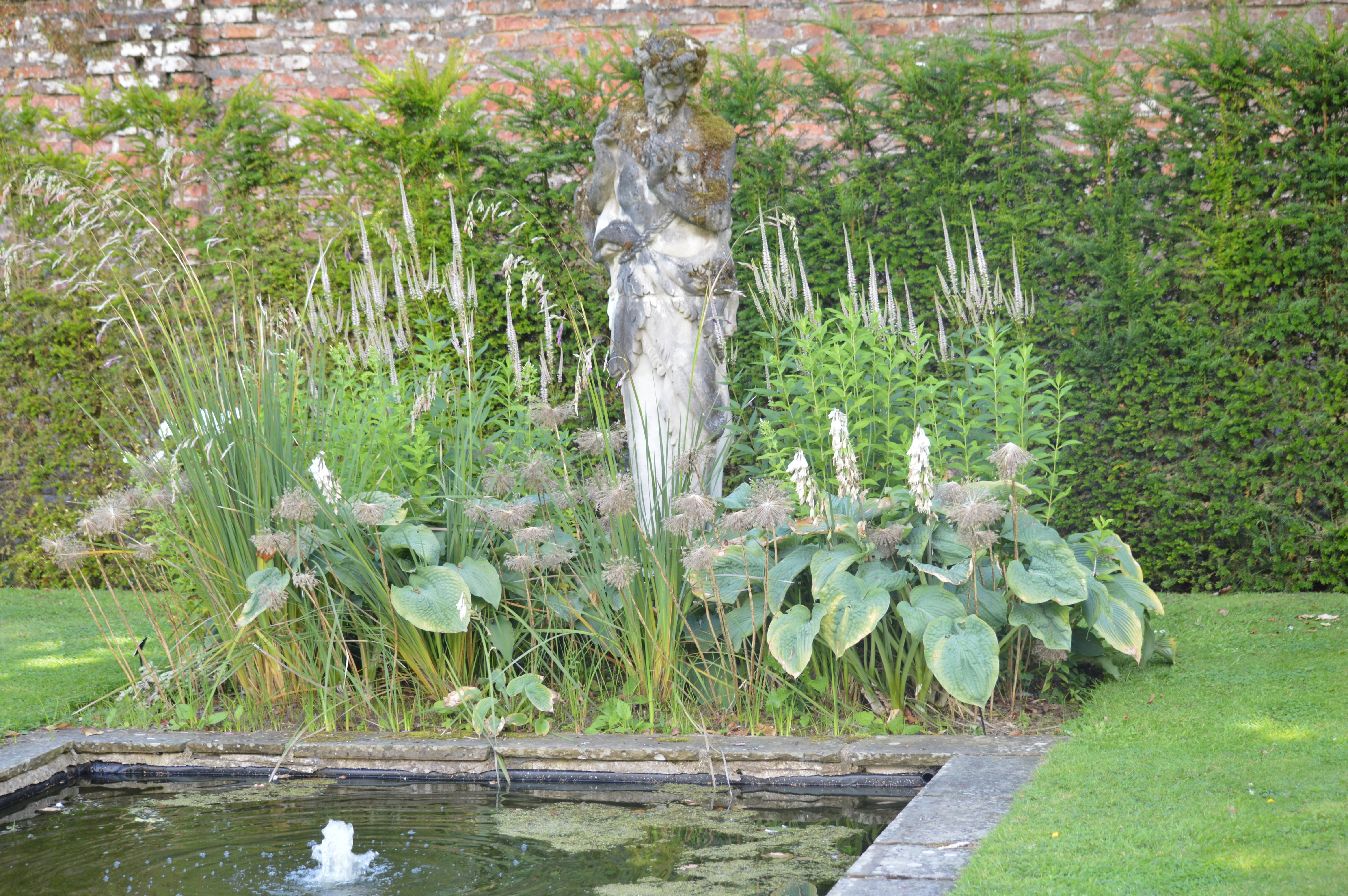 There is a nice run of rose arches and clematis. Many of the roses had finished flowering but there were a few late-flowering clematises hanging on. This one is Doctor Ruppel. 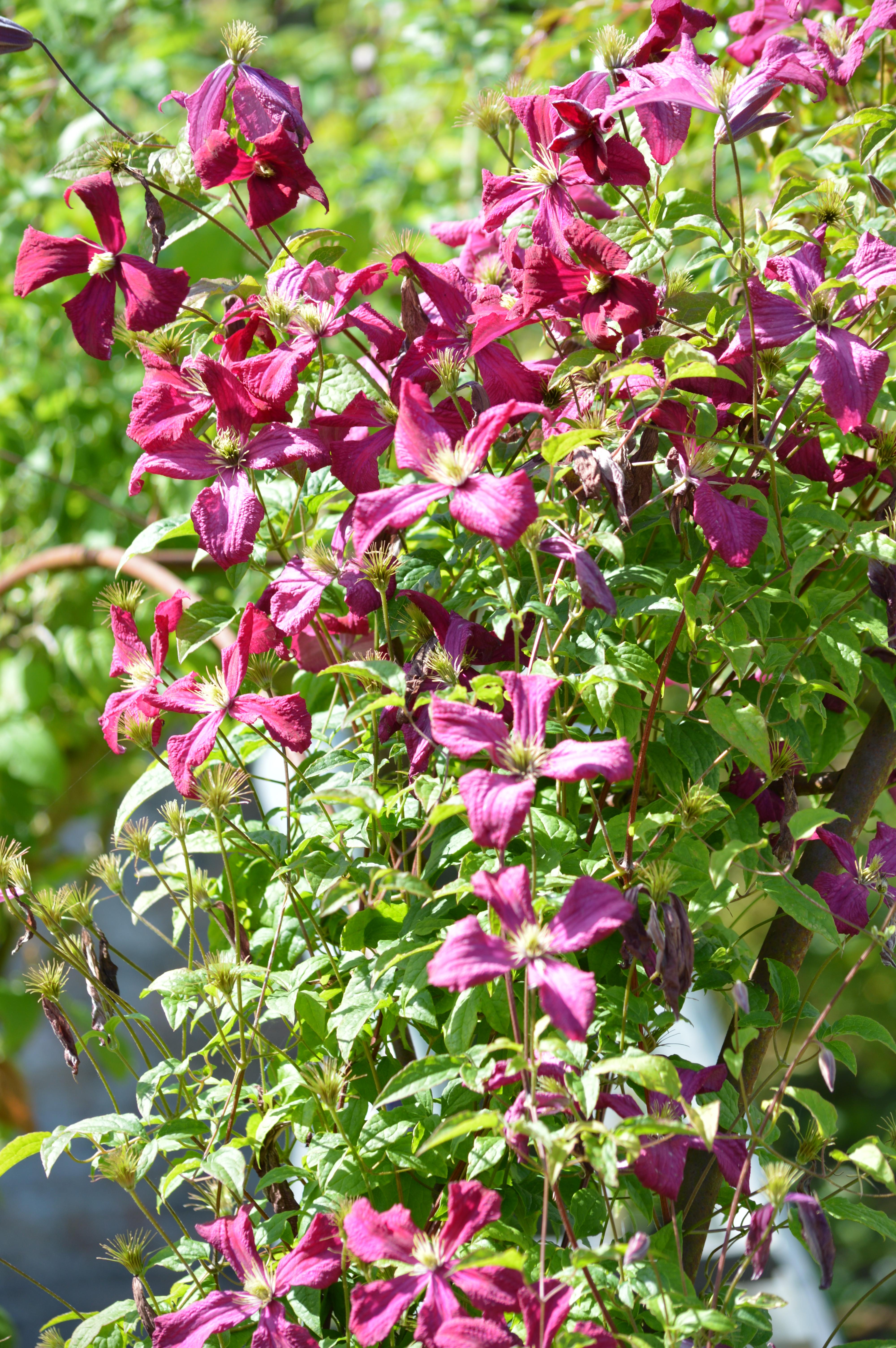 We have continued Alice’s training. Hydrangeas are for having photos taken in front of. 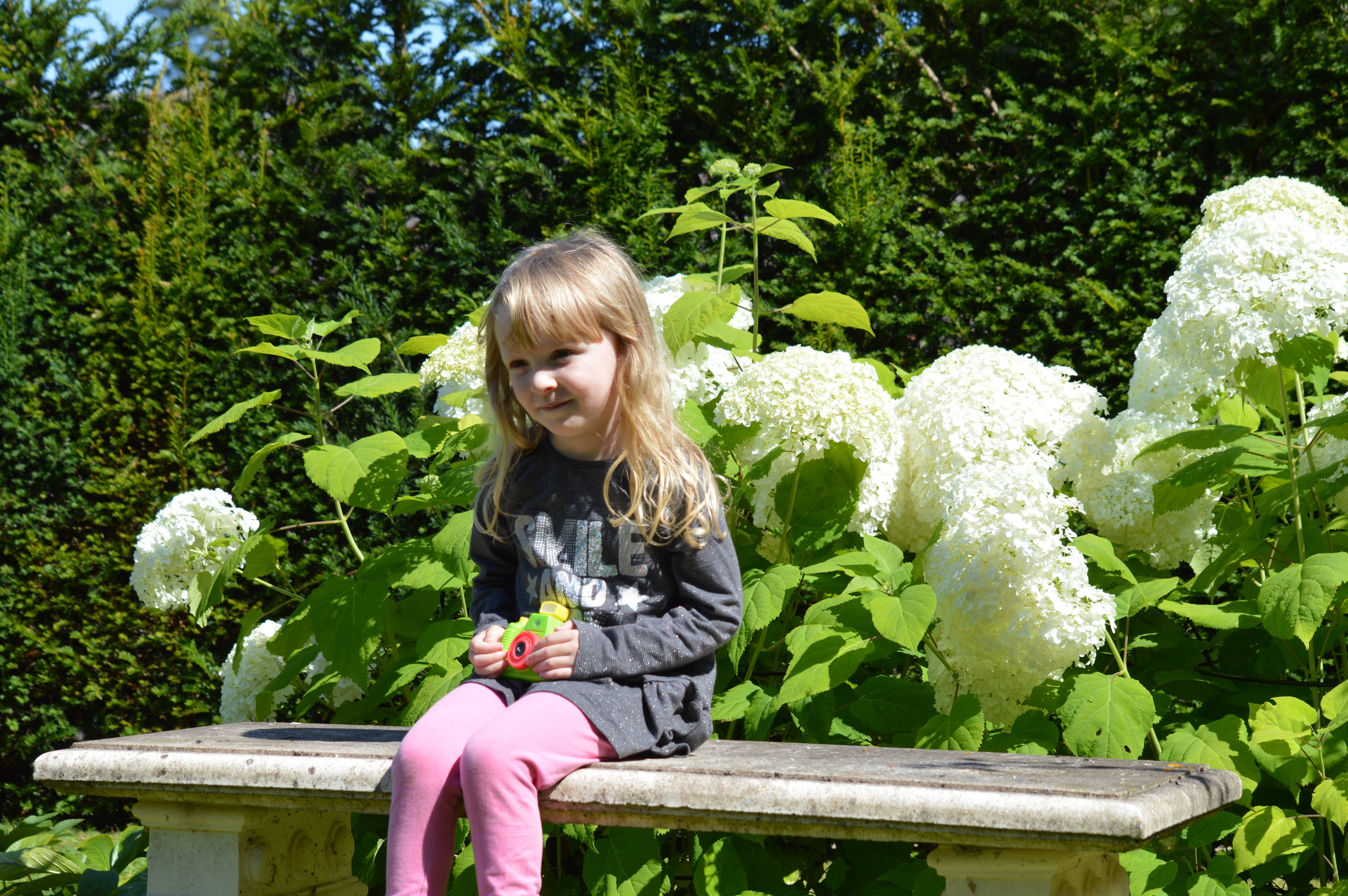 Hydrangea Annabelle has been used a lot but then it is a beauty and easy to propagate. 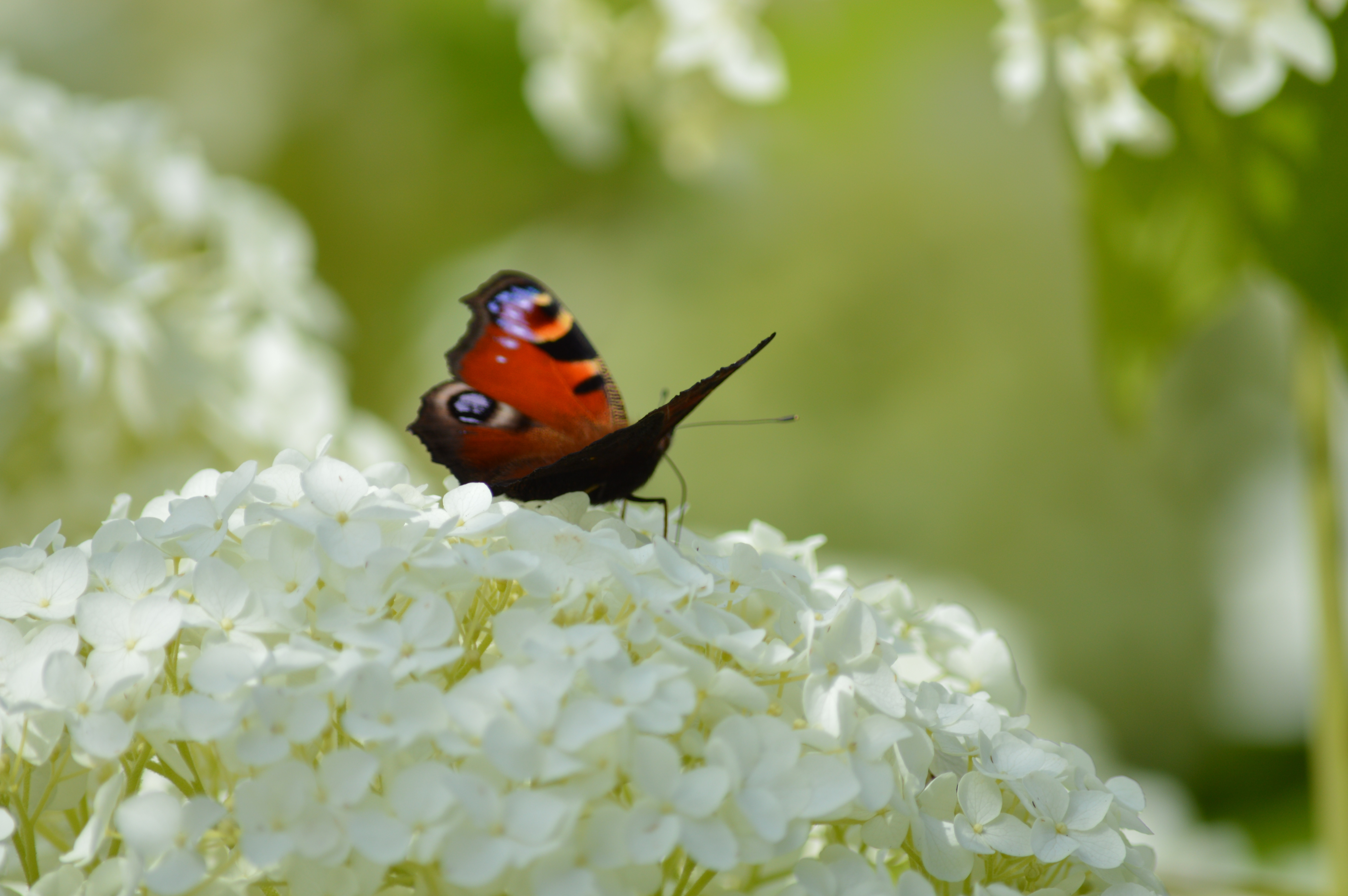 To the side is the veg patch. Some of it looking a bit sorry for itself in the heat but some good obelisks. 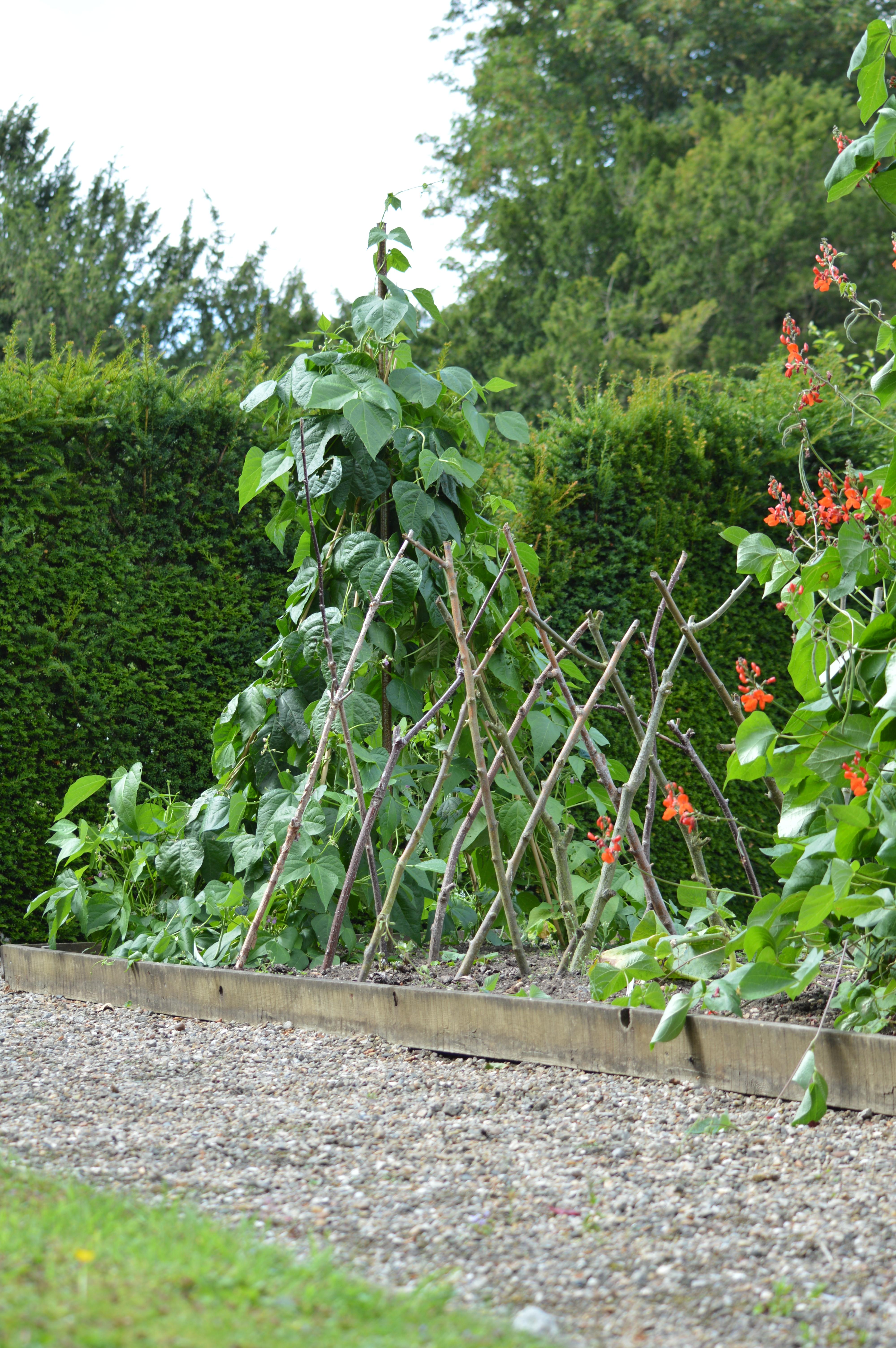 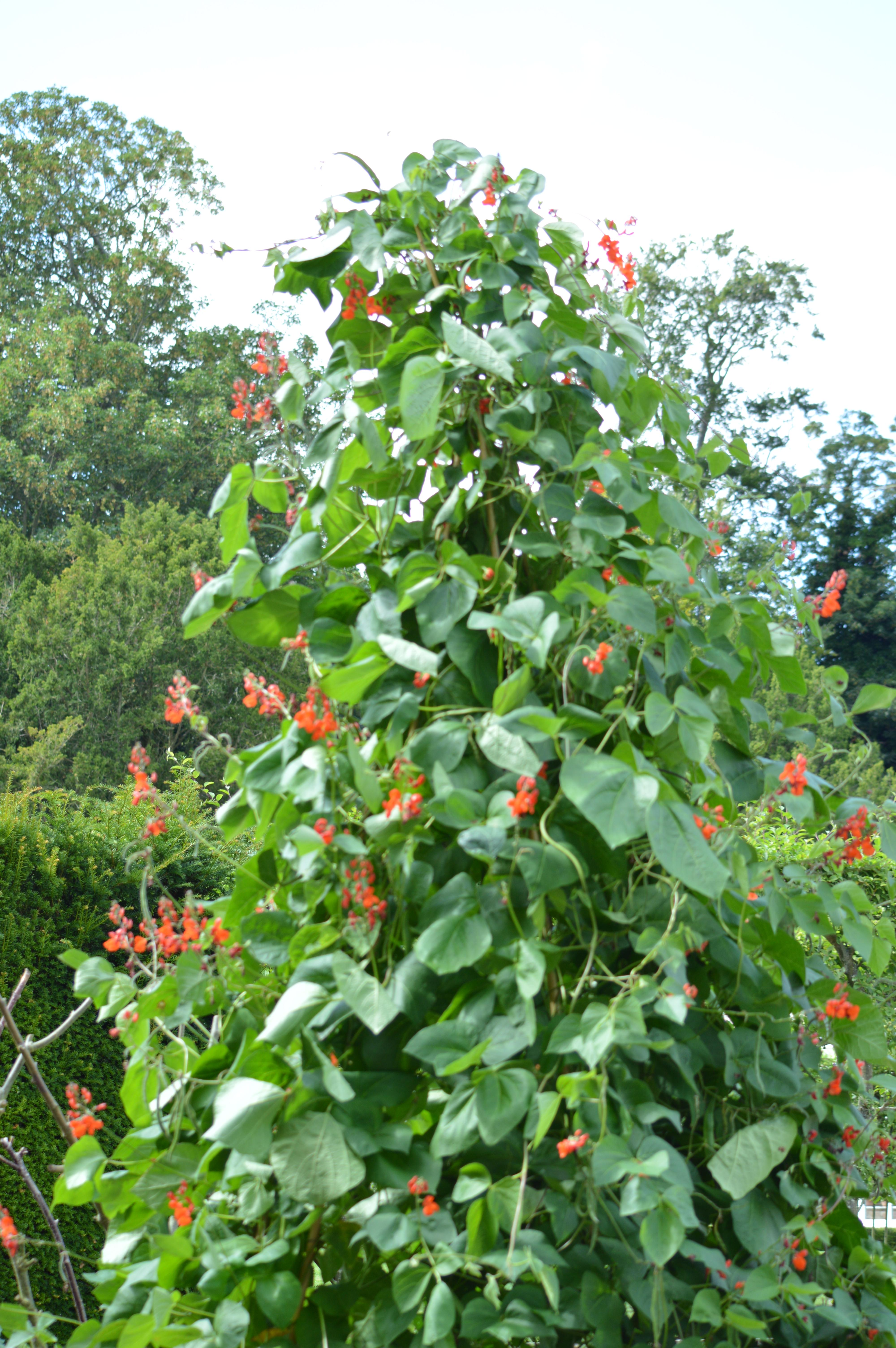 And a good cutting patch of sweet peas. 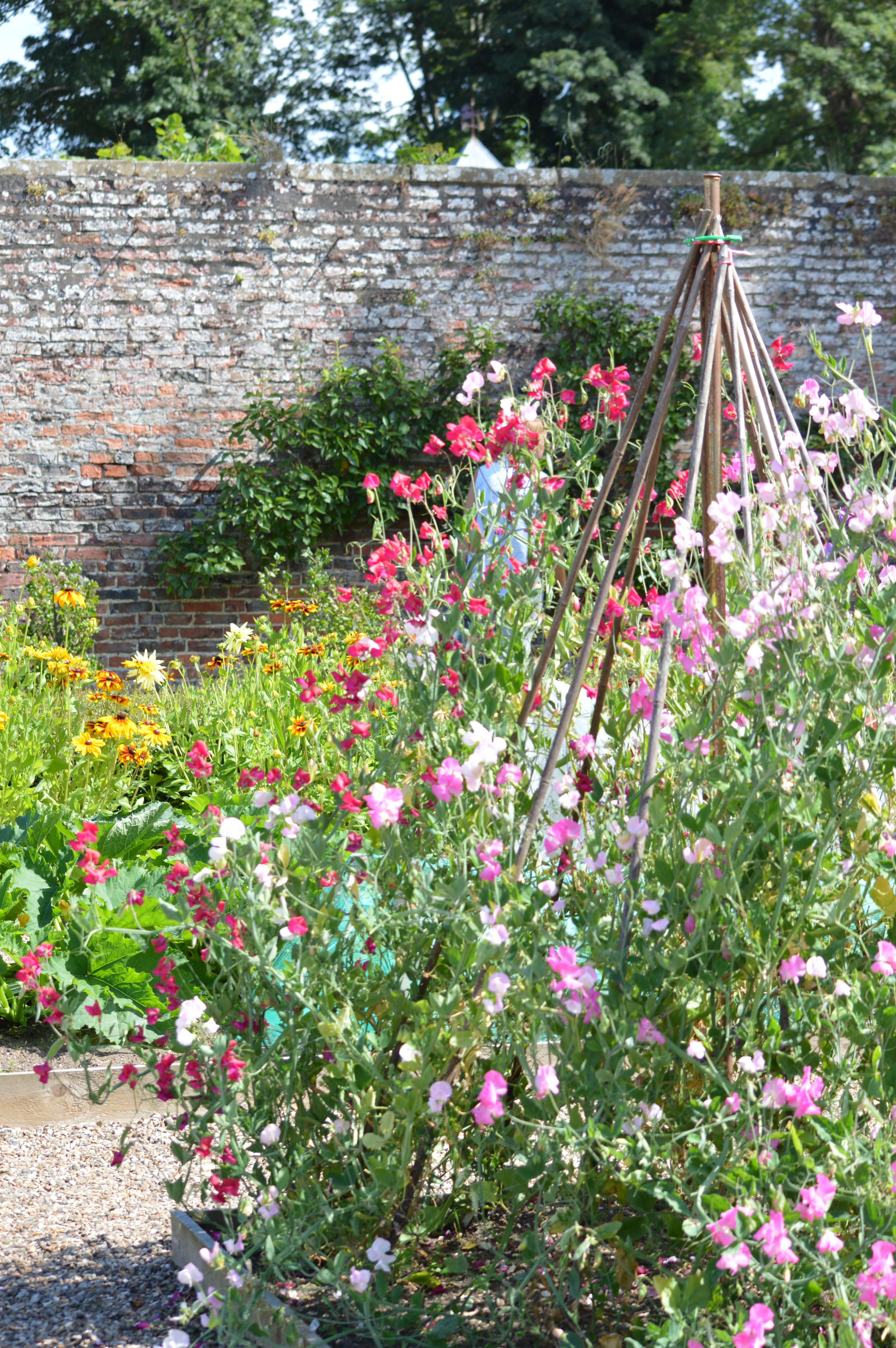 Then a few flowers for cutting are arranged around the edge. The cactus dahlias proving popular with the bees. 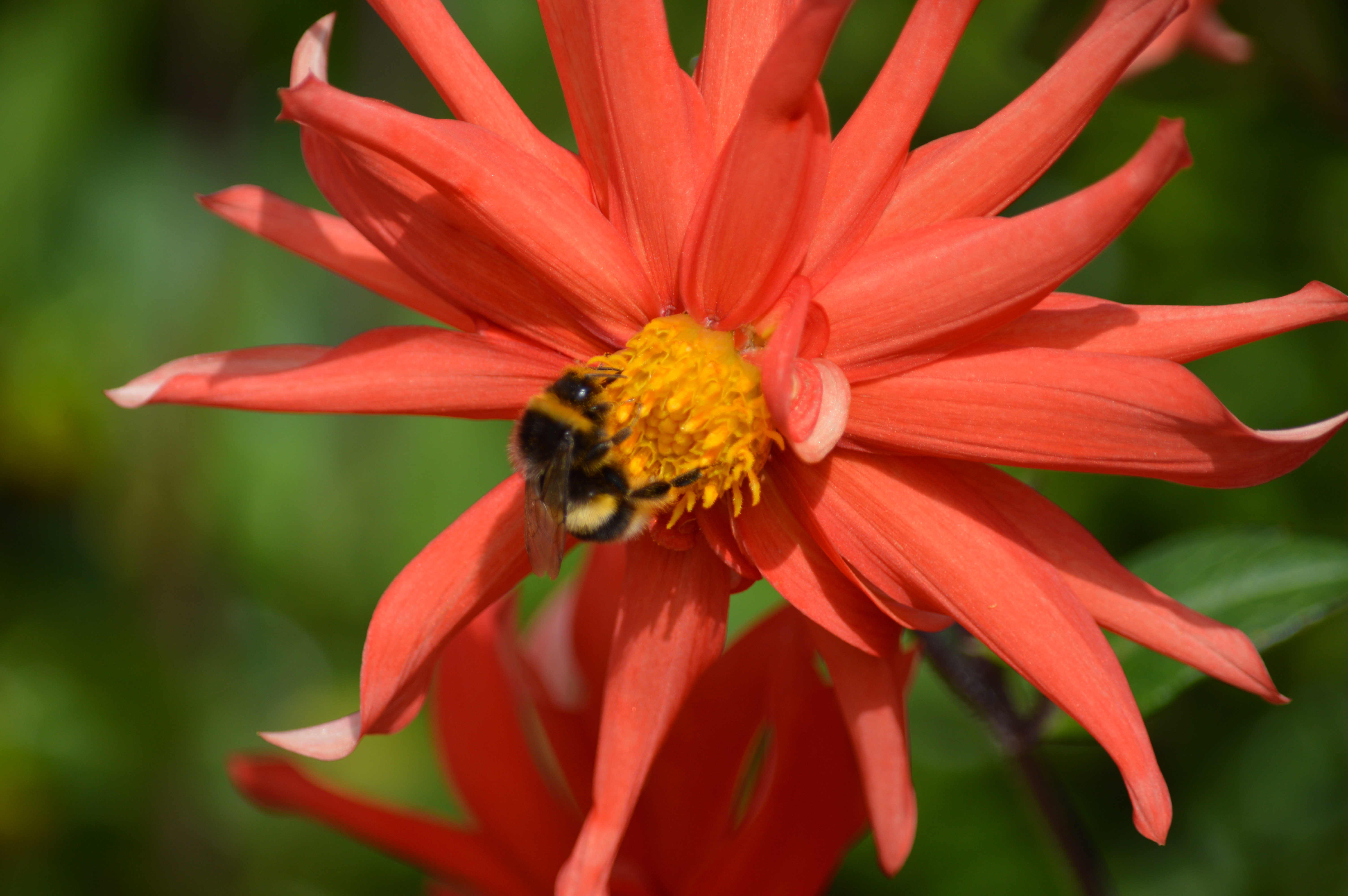 The main walled courtyard is centred around a fountain complete with fish. 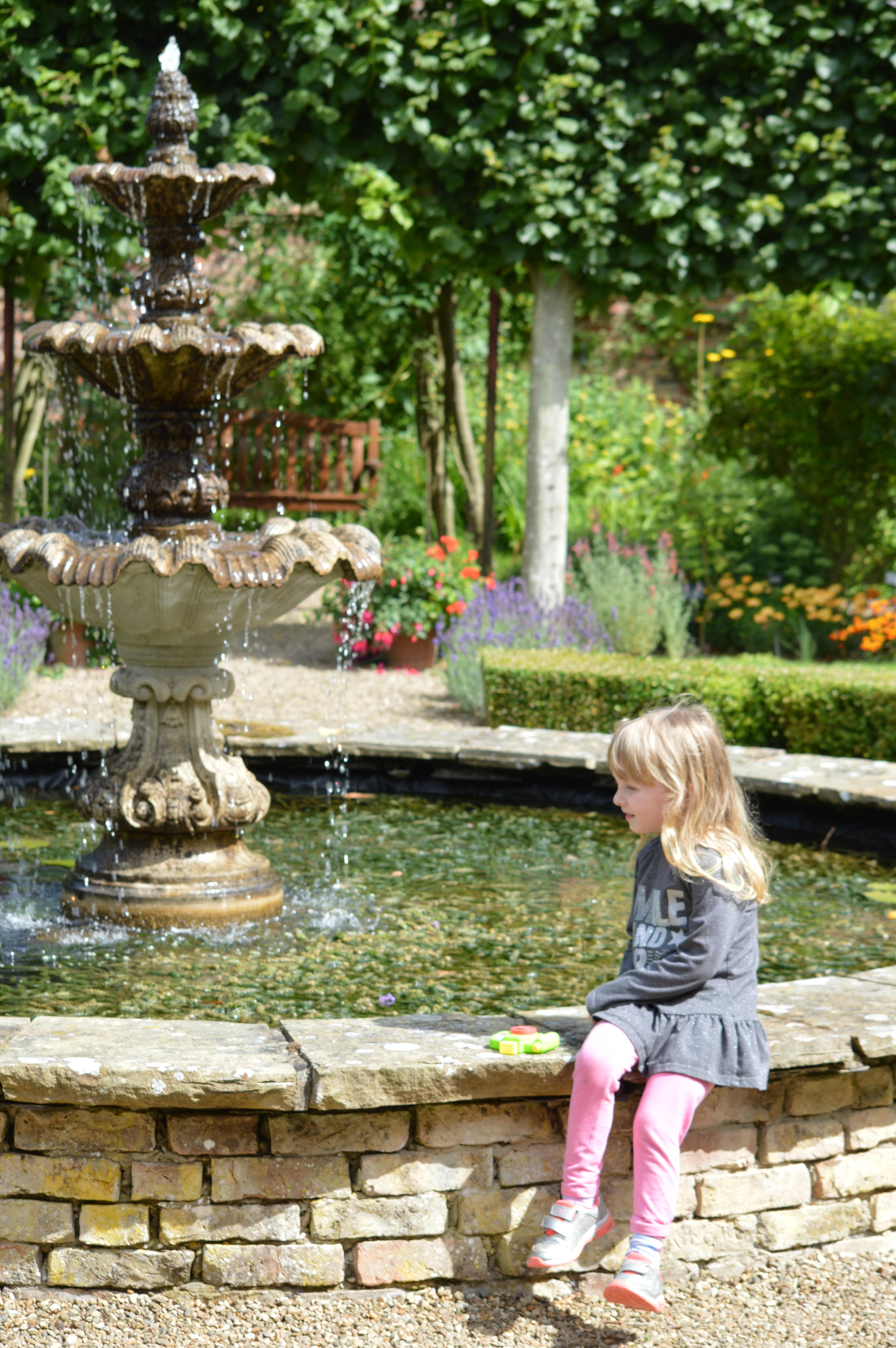 Then the borders seem to have been roughly split in four with a tropical border, a white area, a pollinator-friendly area and the shade border. I’m not sure if this is how they’d classify their planting but this is how it came across to me. 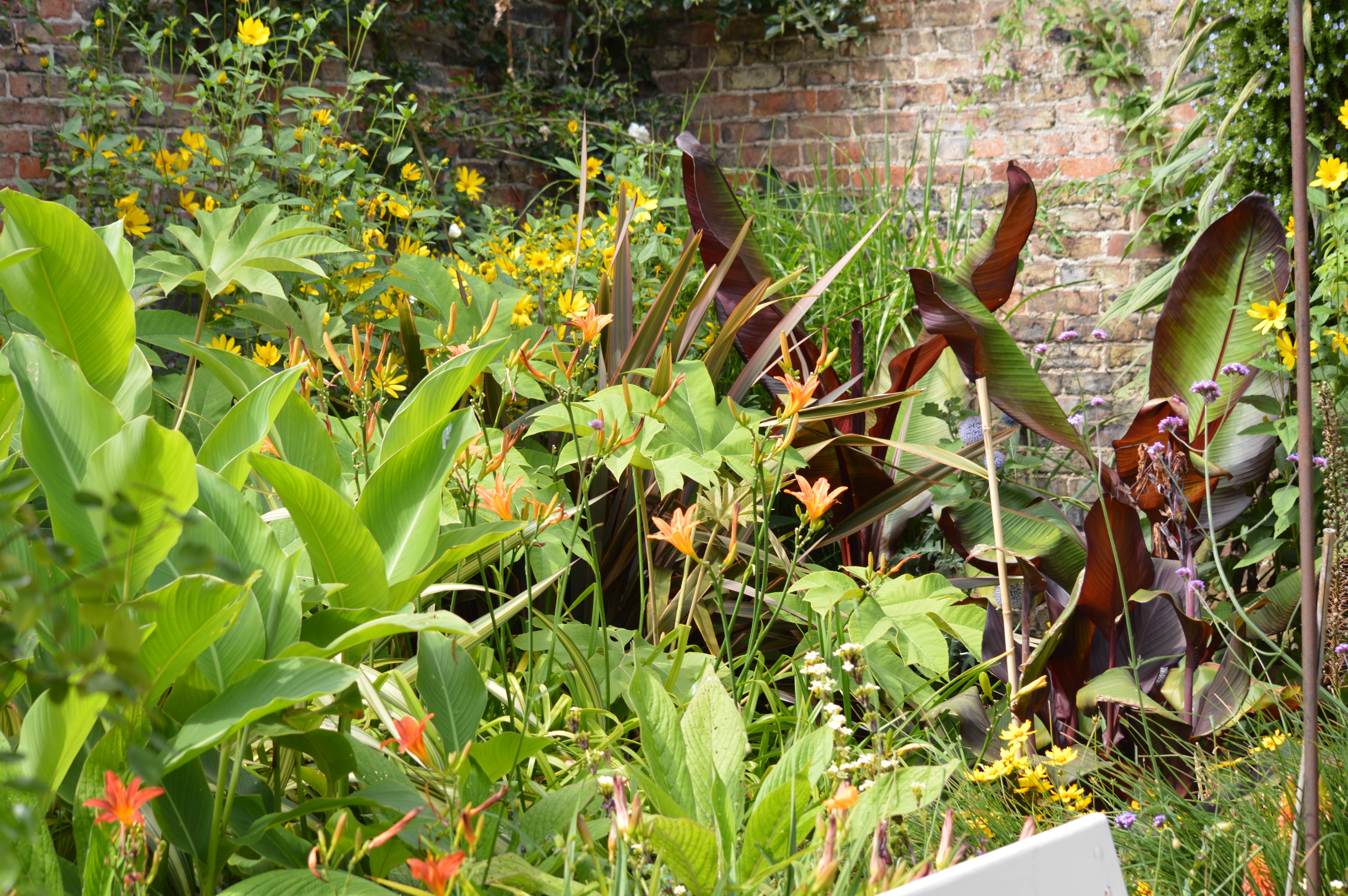 The cannas are truly enviable. A picture of health as opposed to my runt. 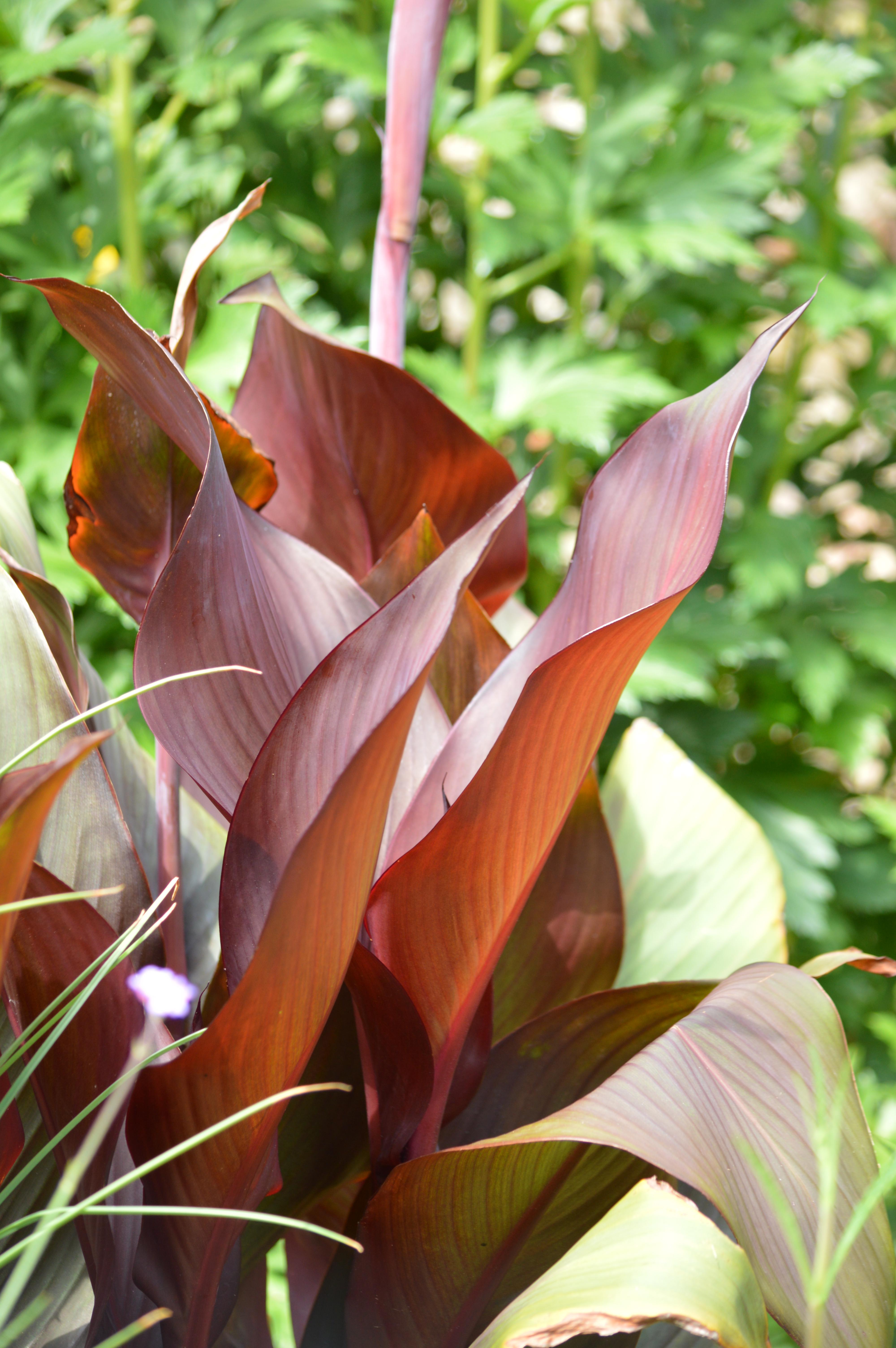 The shaded border is full of many of my favourites with foliage being key. Lots of hostas and ferns. It was also the nicest place to sit. When we set out it was grey and clouded but the sun came out as we wandered and the shade was appreciated. 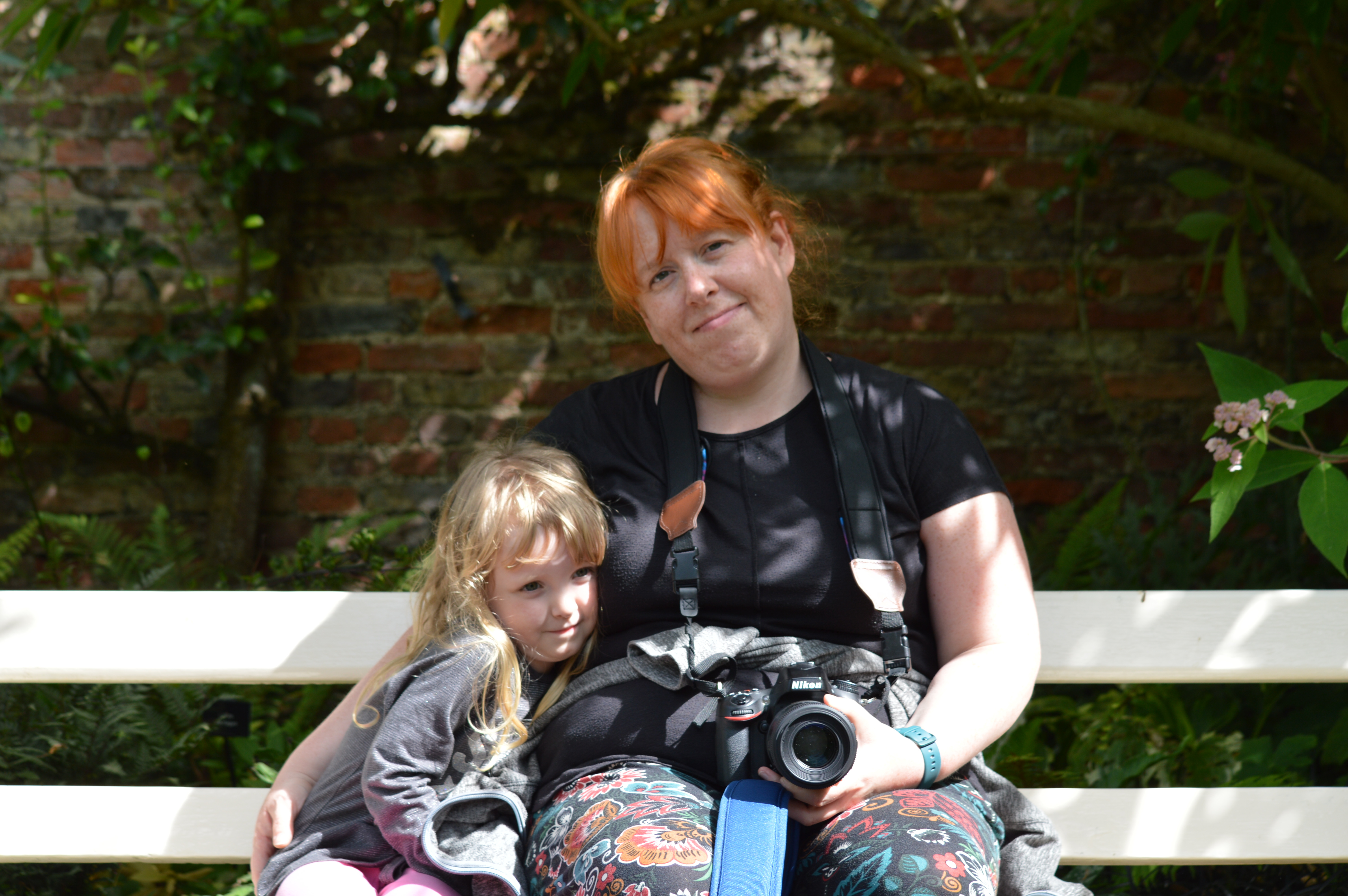 The white border. As in Vita’s it is really a green border. It’s nicely done but it doesn’t excite me personally as much as other areas. 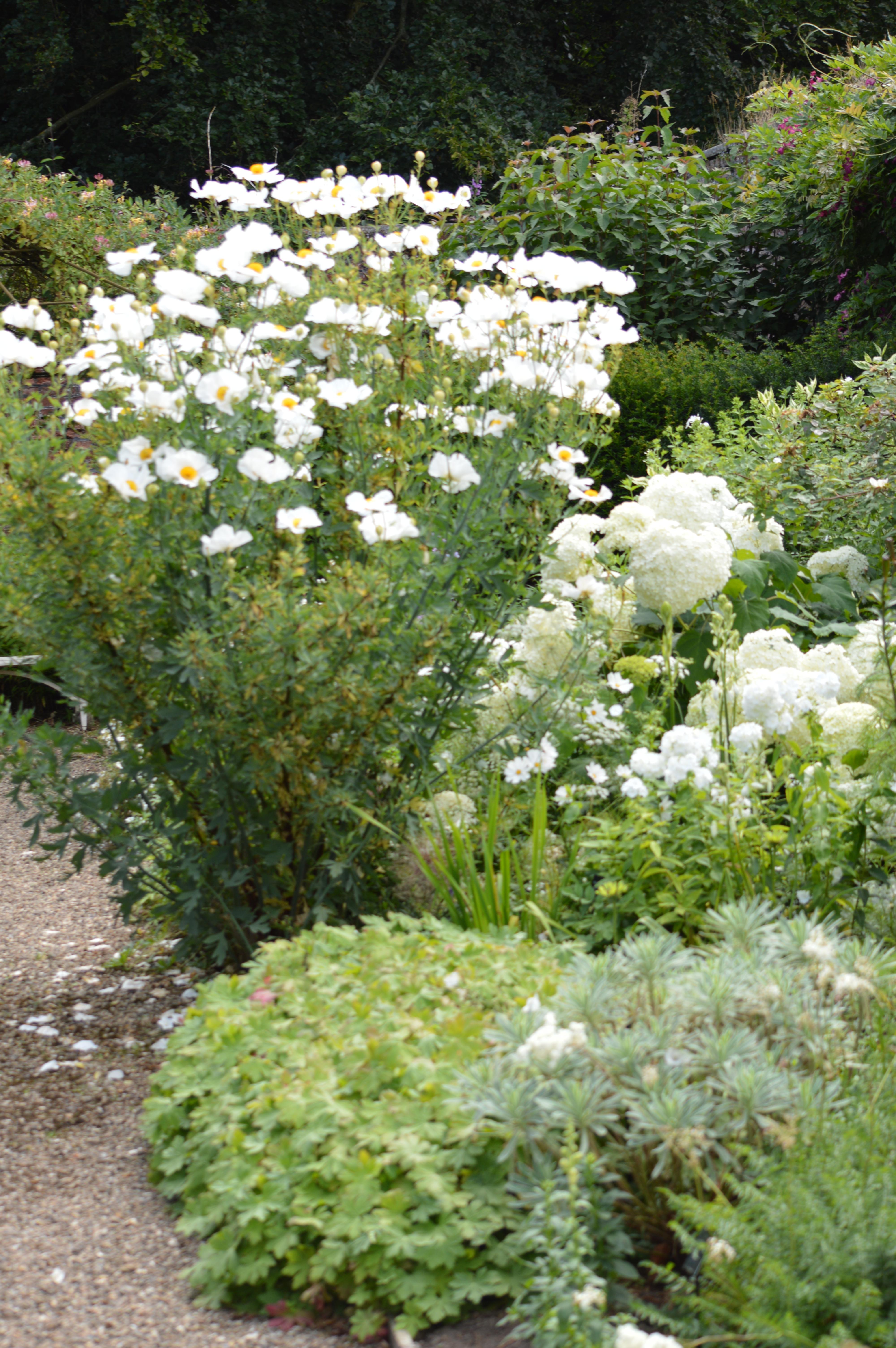 Though the agapanthus was spectacular. 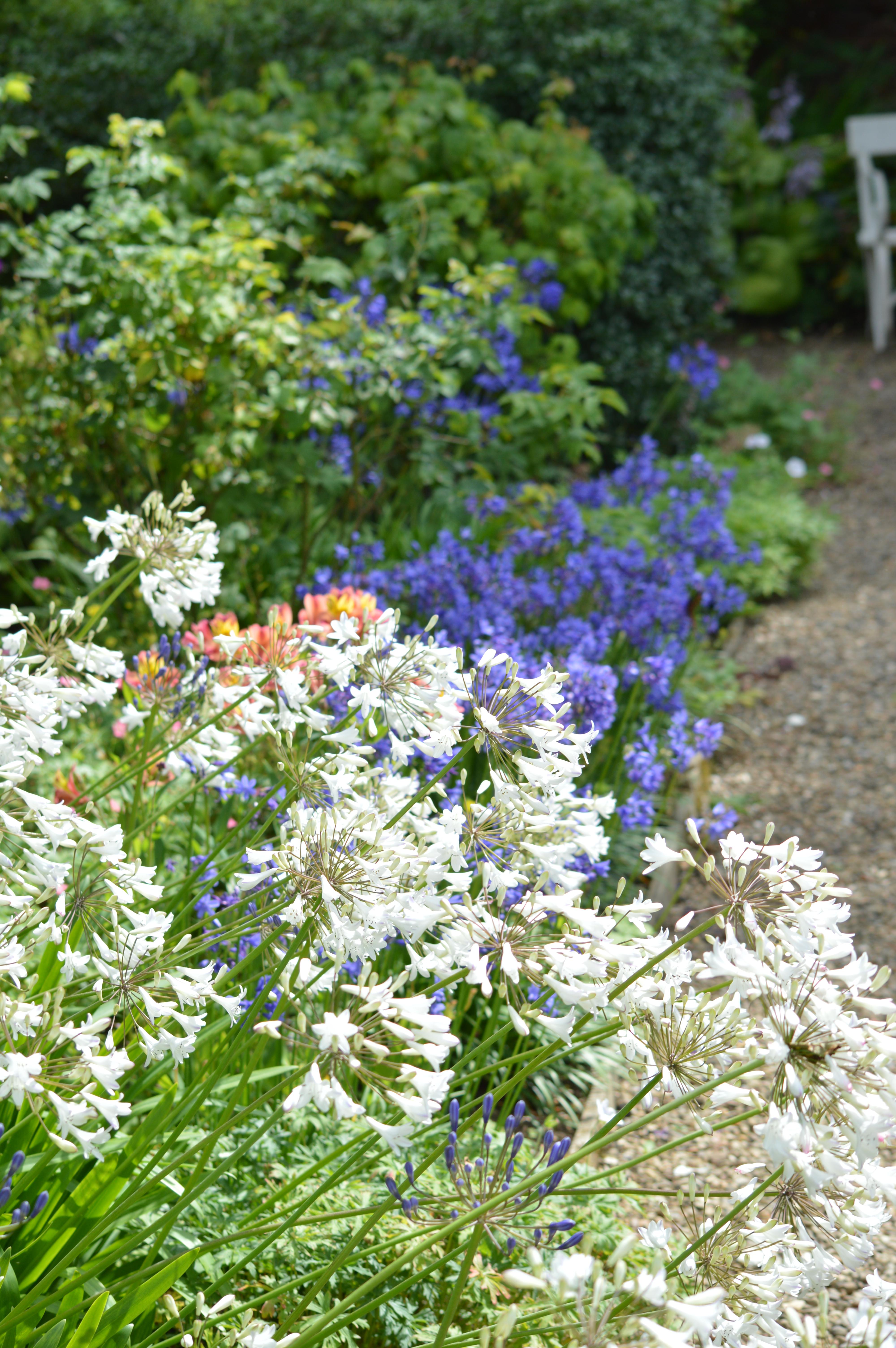 It was good to see lots of bees and butterflies enjoying the garden. I saw both small and large white, peacocks, and gatekeepers while we were in. 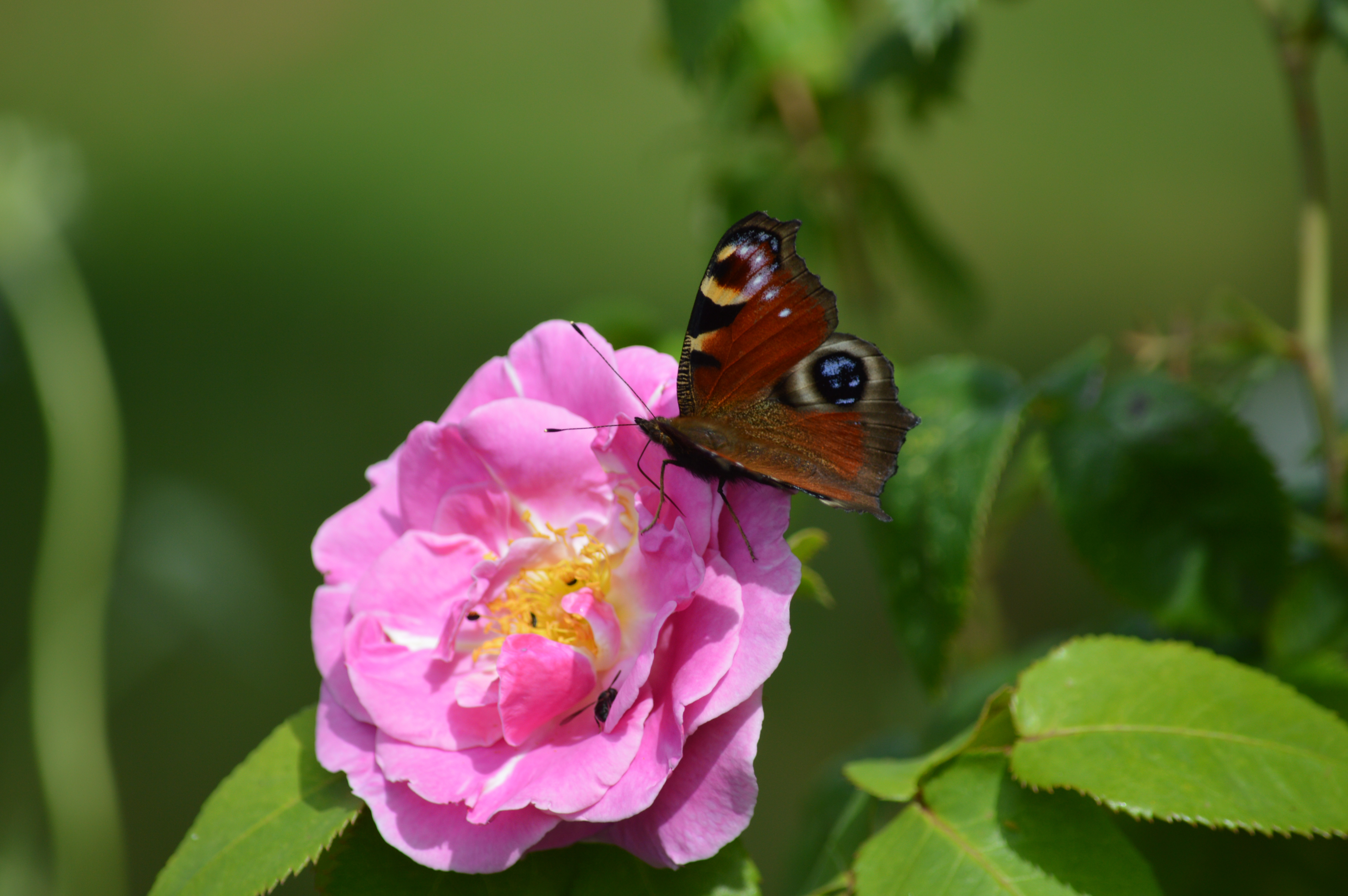 We left the gardens for the cool of the woodland walk. 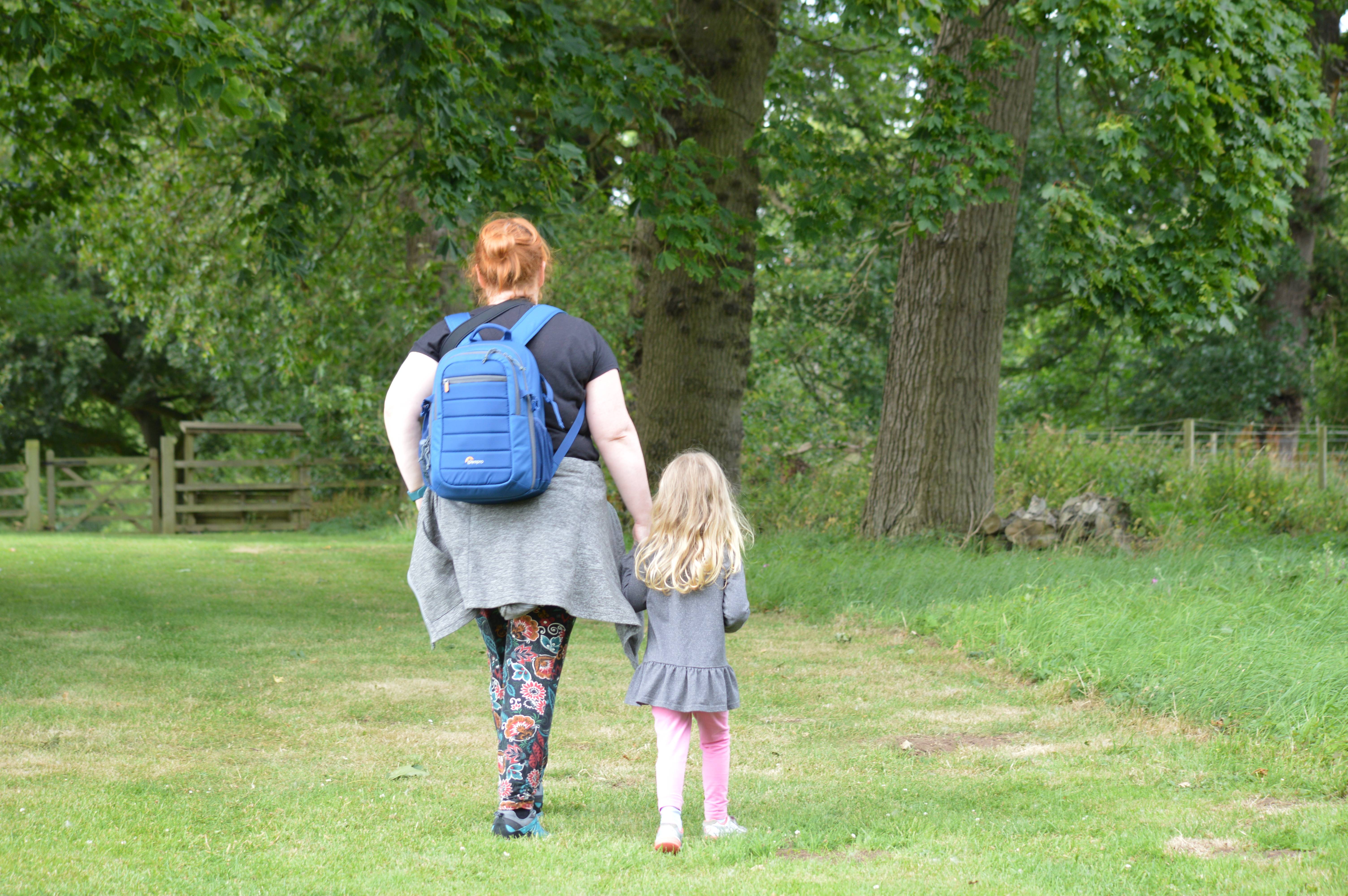 We told the story of the Gruffalo while we walked. 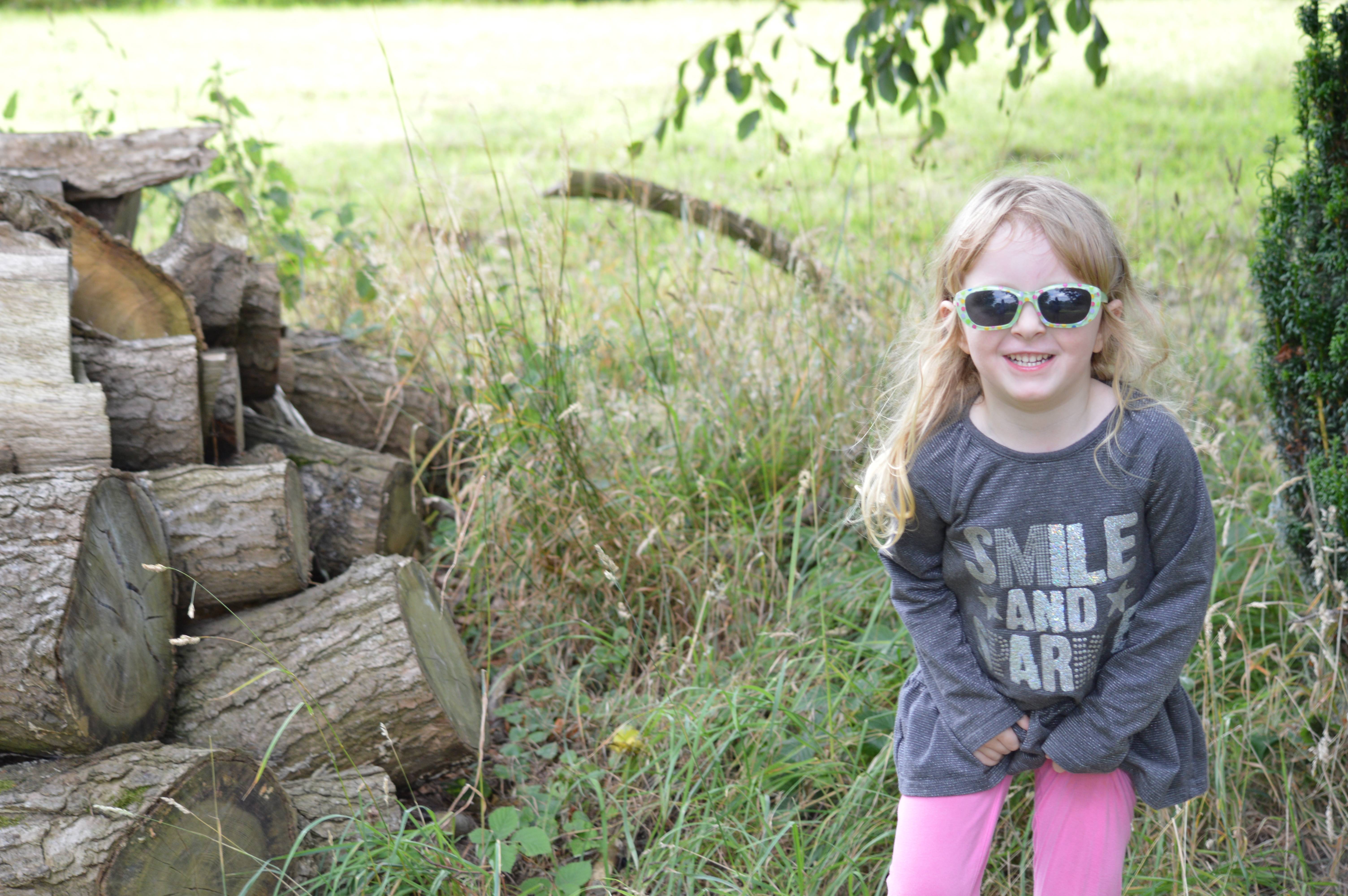 This took us round to the wilder ponds. A few moorhens looked to be hidden around the edge. A few dragonflies were flitting along the edge. I managed a few shots though none that great. Not as good as the shots I’ve been getting in my garden but nice to see a different dragonfly. I think this a common darter but if anyone knows better please feel free to comment. 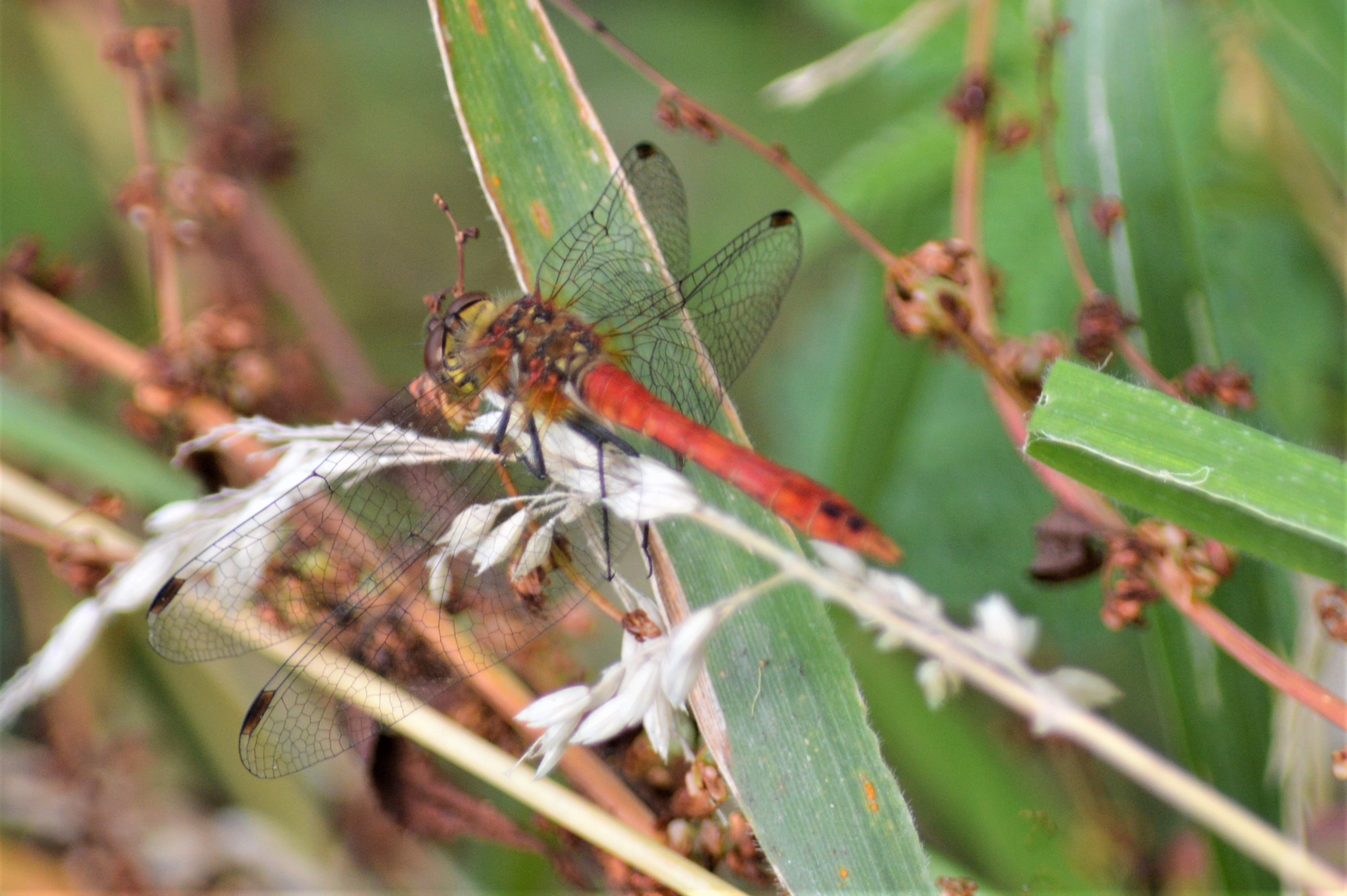 They had a plant bench laid out. Mostly well priced for the size of the plants. They had a few of the hydrangea Annabelles for sale, a few interesting hardy geraniums, fuchsias and a few other bits. I picked up some cheap hakonechloa macra aureola for two-thirds of the price it is costing online. I’m not sure if I’ll use this bulking out my existing patch or possibly in a pot with one of the Acers that requires potting on. Then a small eucomis. Though I’m not sure whether it is labelled right. I like the spotty underside of the leaves. These grow a kind of pineapple-shaped flower. Quite exotic looking though supposedly quite easy to grow. 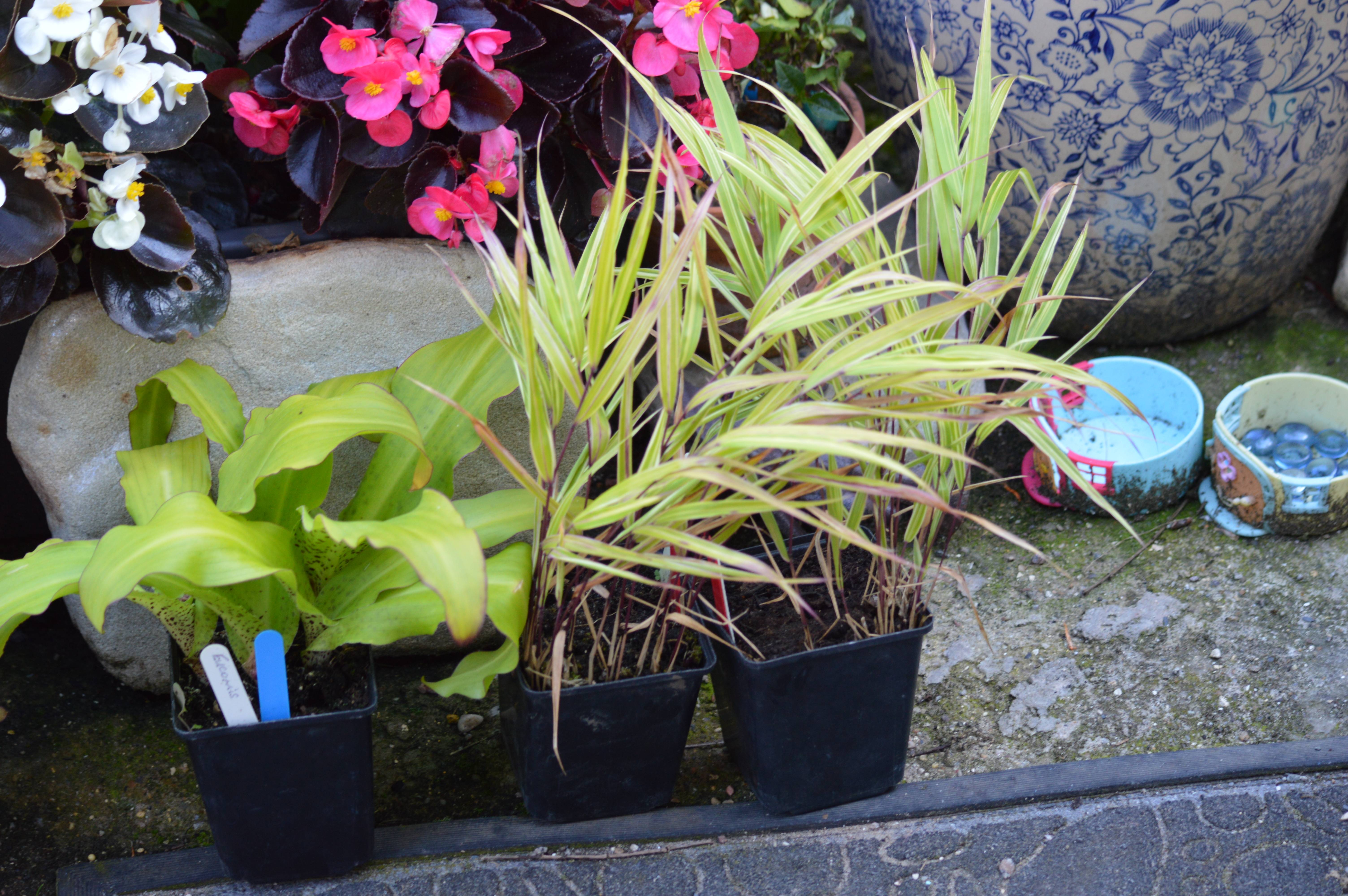 A nice afternoon out. The gardens aren’t massive. But, it was about the limit of what Alice could manage on a poorly leg and Amy’s back is aching too. Though she doesn’t know what she’s done. Always nice to see other gardens and see a few different plants in different combinations. 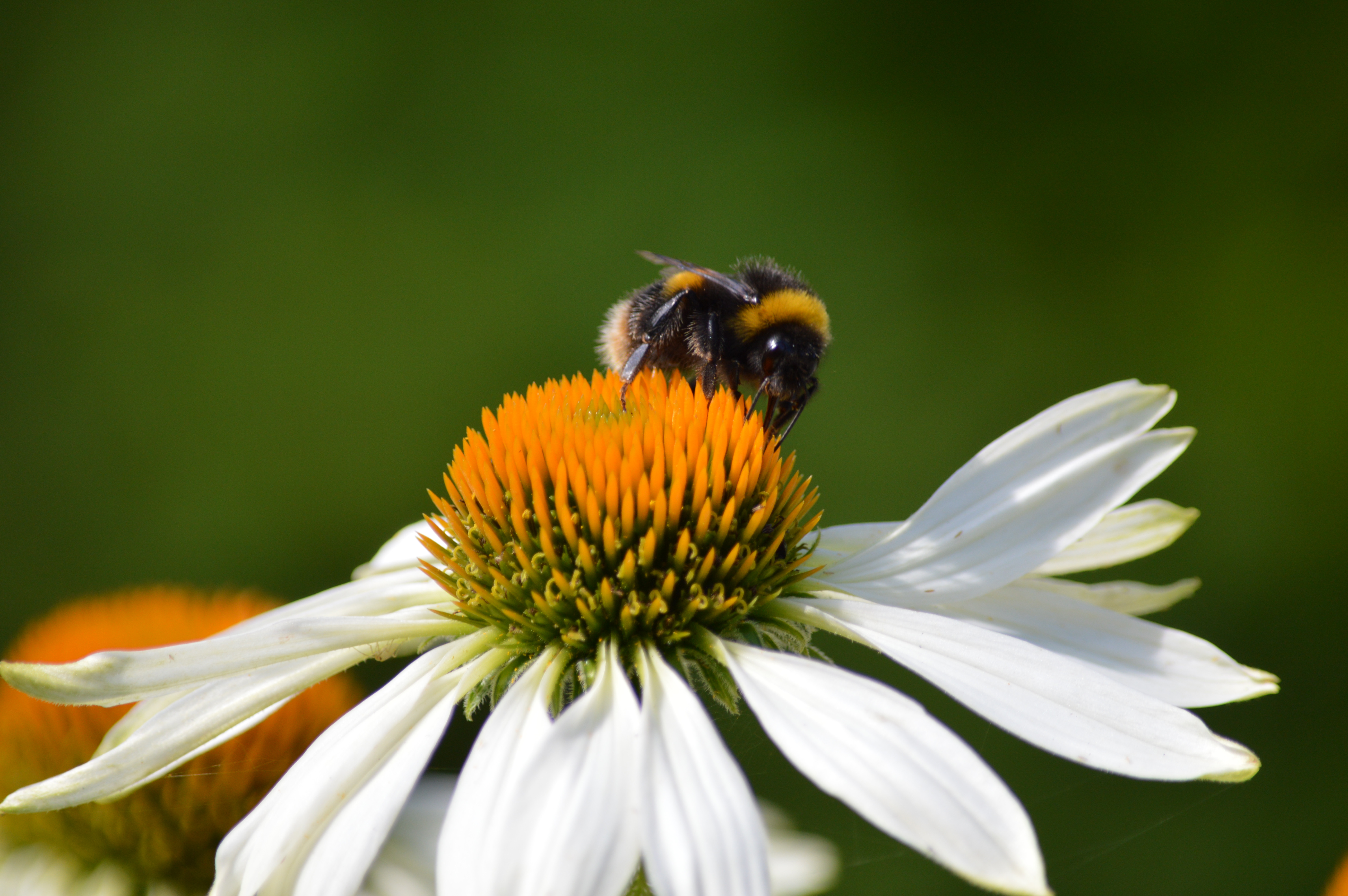