This week I have been aiming for a few decent photos in the garden. There are a few photo competition deadlines coming up including the Countryfile calendar competition. Going off previous years where the ‘wildlife’ has been faked in home-built studios I probably don’t stand much of a chance. But the theme this year is ‘bright and beautiful’ and I have an idea of a photo I wanted. The rules have been changed a bit for this year in that people can enter wildlife photos taken closer to home as we’ve been on lockdown rather than the countryside. So I wanted to try and get a photo of the wildlife in my garden that has brought me comfort during lockdown.

I have been wanting to get a decent photo of the bees on this allium. The allium was randomly placed in Alice’s fairy garden. It is growing out on in its own but the bees are loving it. It frequently has two or three bees on it. 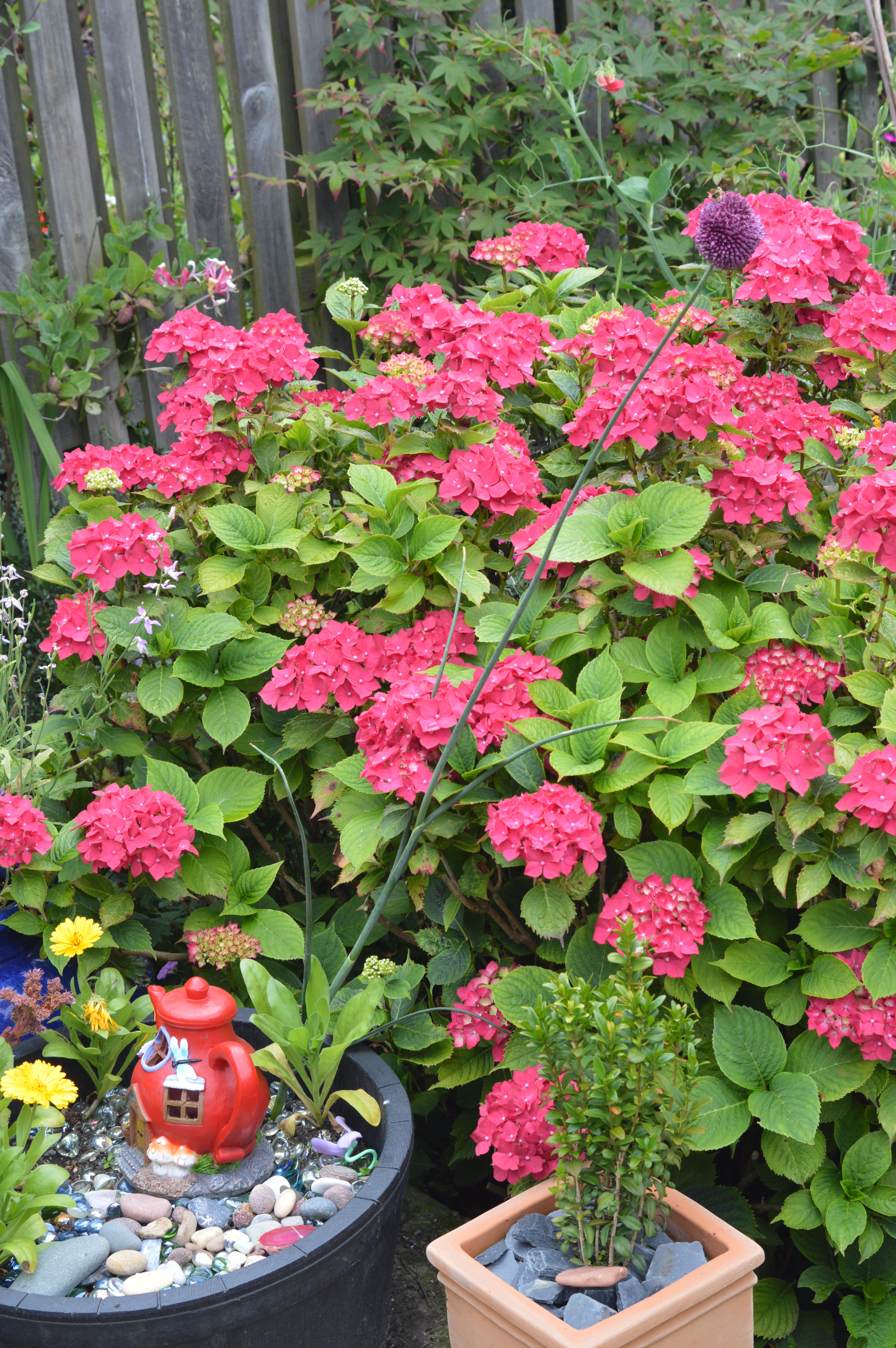 Being out on its own it has the advantage of standing out dramatically on photos as I can angle photos to either have the bright green of the grass of the bright pink of the Hydrangea macrophylla. I knew the combination of a bee, the allium and a striking background could make for a stunning photo. 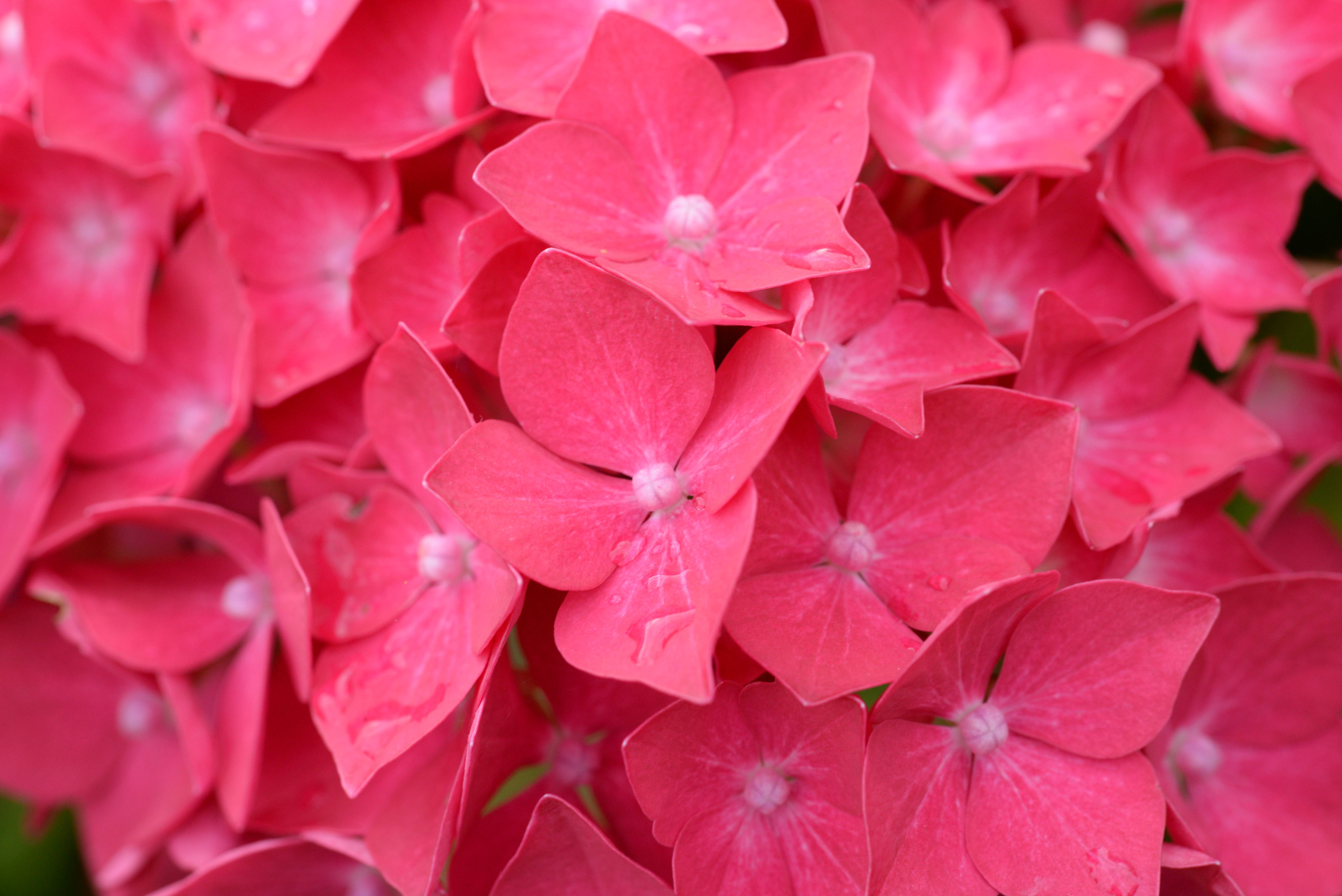 My initial attempts were taken with my telephoto lens (Nikon-300mm) as the bees were a bit skittish when I got too close and they weren’t settling for long. I can focus this lens quickly for the quick movements of the bees and take shots from a little distance. The results were ok but using such a long lens limited my freedom to compose the shot with the background as I can’t gain the height to get the background how I wanted it. It also lacks the detail I felt I could get on the bees. 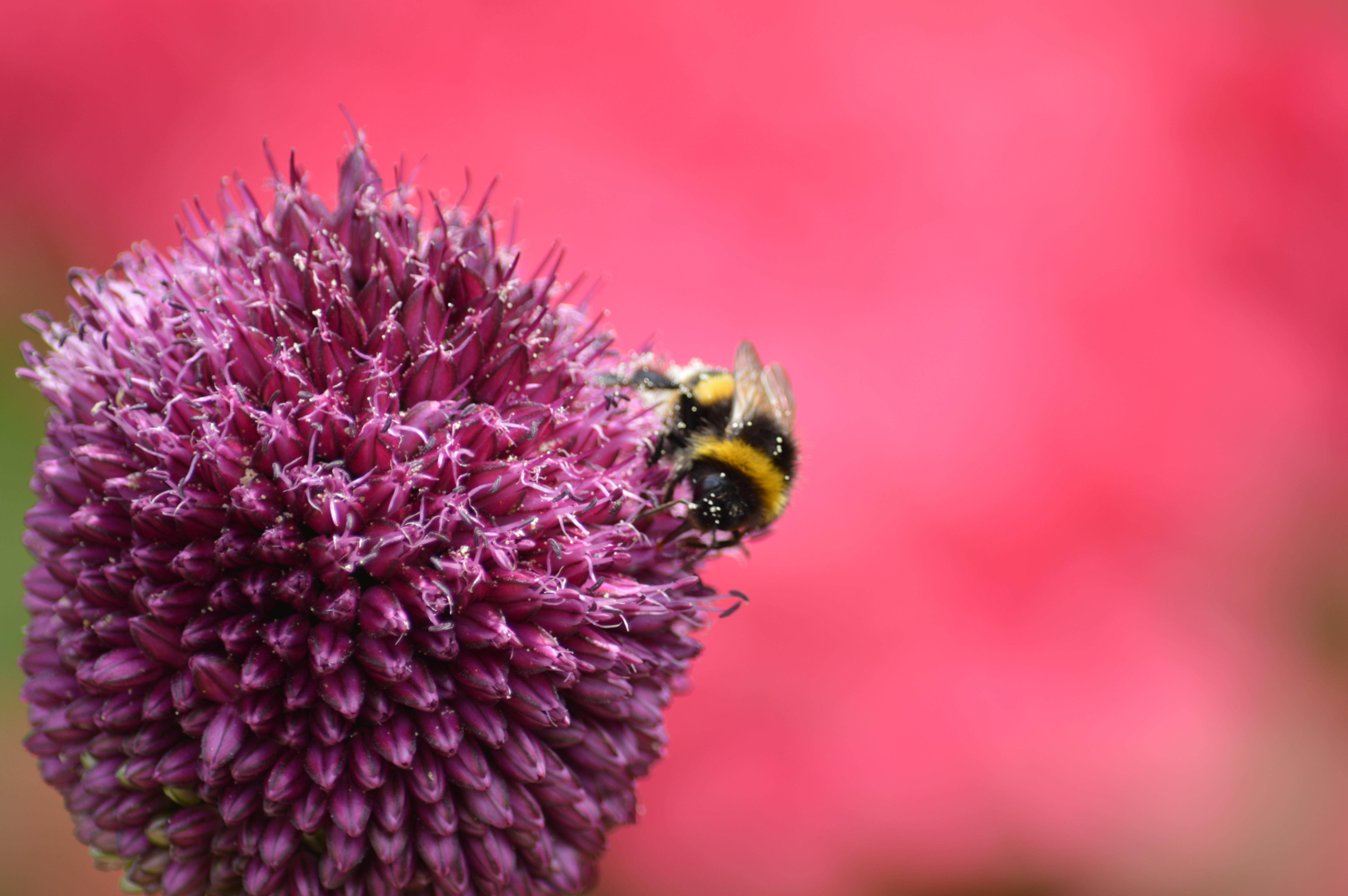 I decided I’d try with the macro lens to get a higher level of detail on the bee. 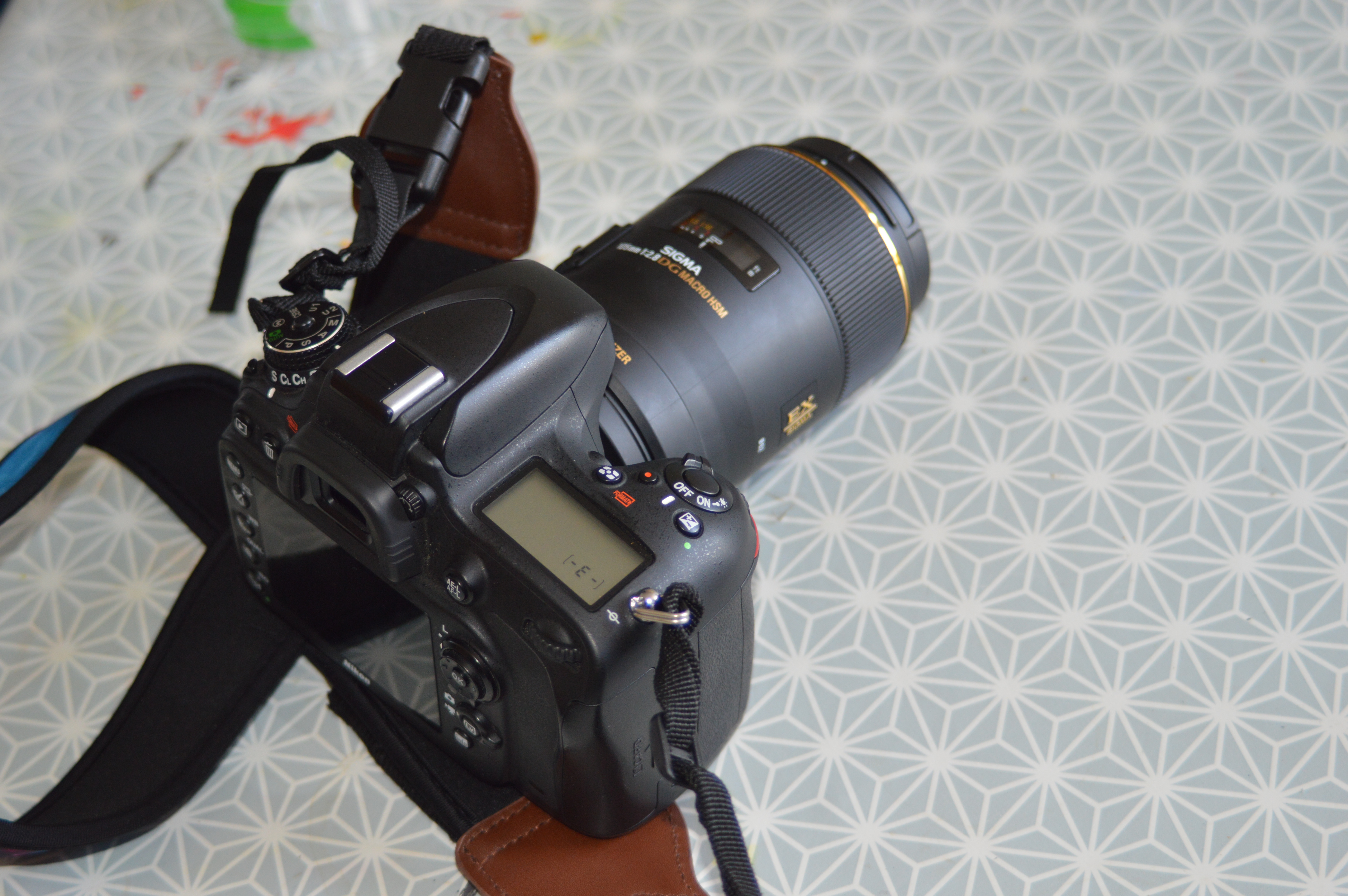 It’s been a bit of a grey week so the photos are a bit muted. But, you can see the level of detail on the bee went up from the previous photo. However, it lacks the depth of field to have much of the allium in focus. 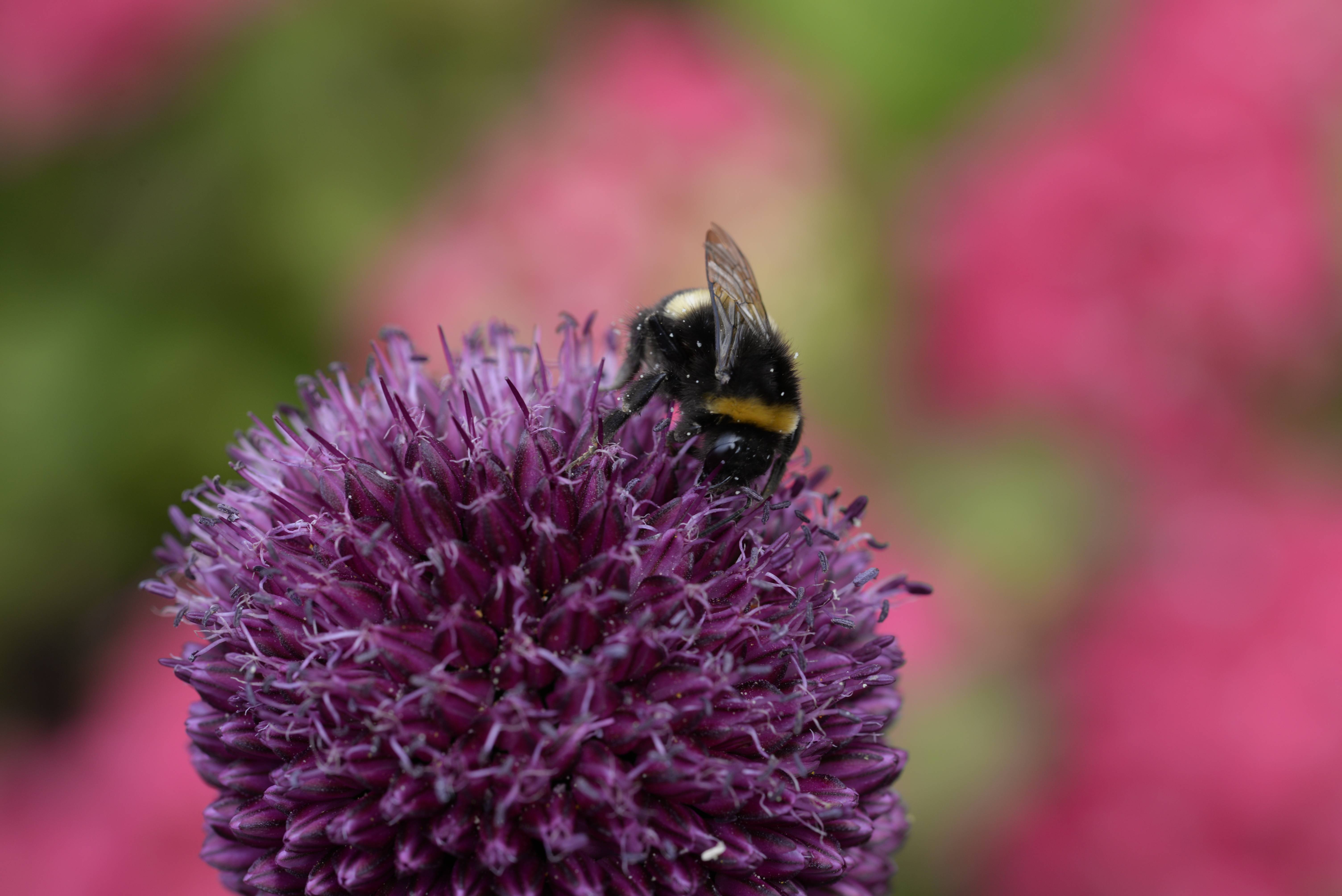 I’ve been hoping for brighter days, but as they haven’t happened I got the flash out. I don’t often bother with it as I mainly use my previously mentioned telephoto lens for taking pictures of the birds. The flash doesn’t make much difference at those distances. But for this close up work it stops me or the camera shading out the subject. It does add quite a bit of weight to the setup. 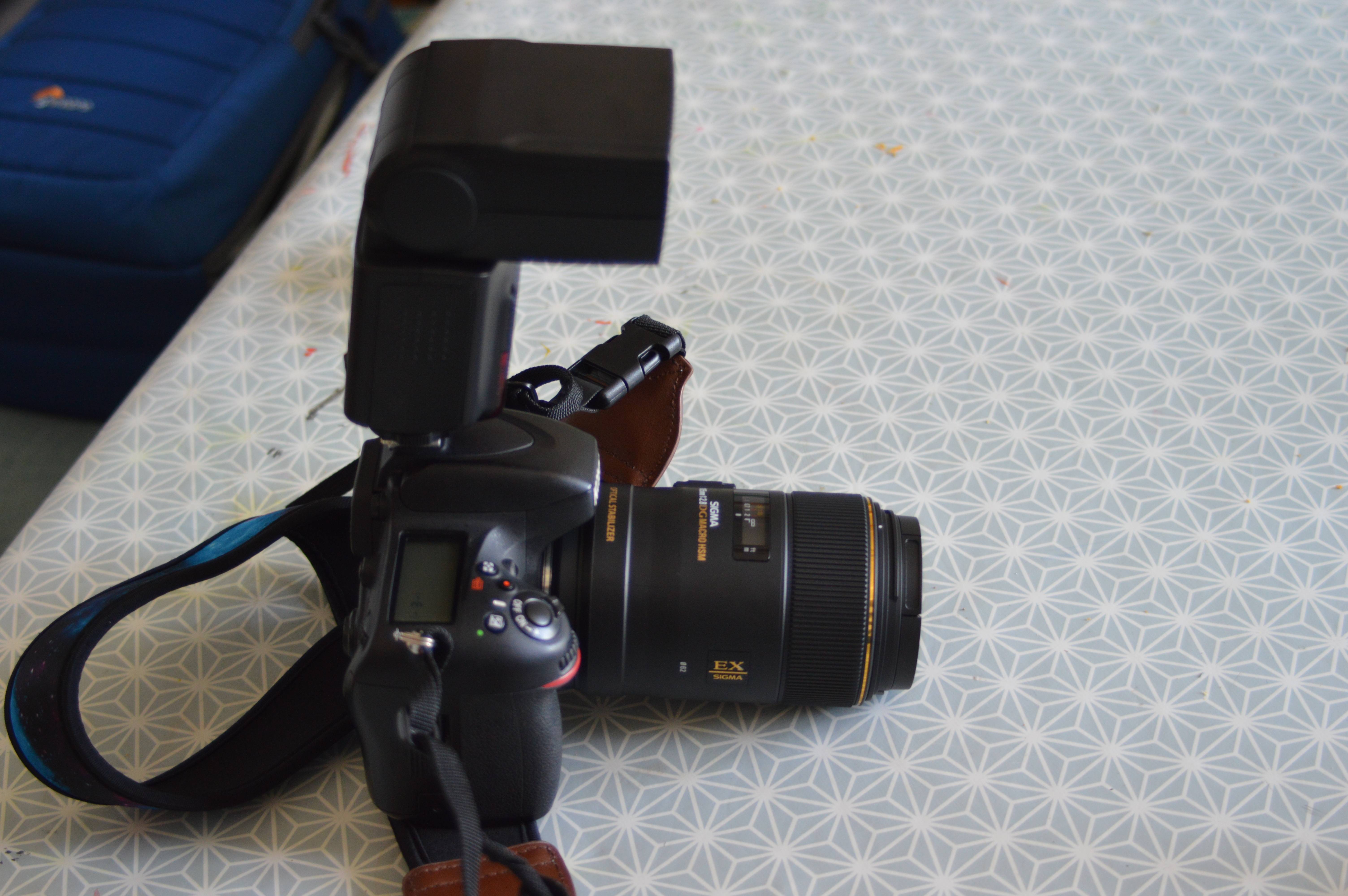 The best result with the flash. 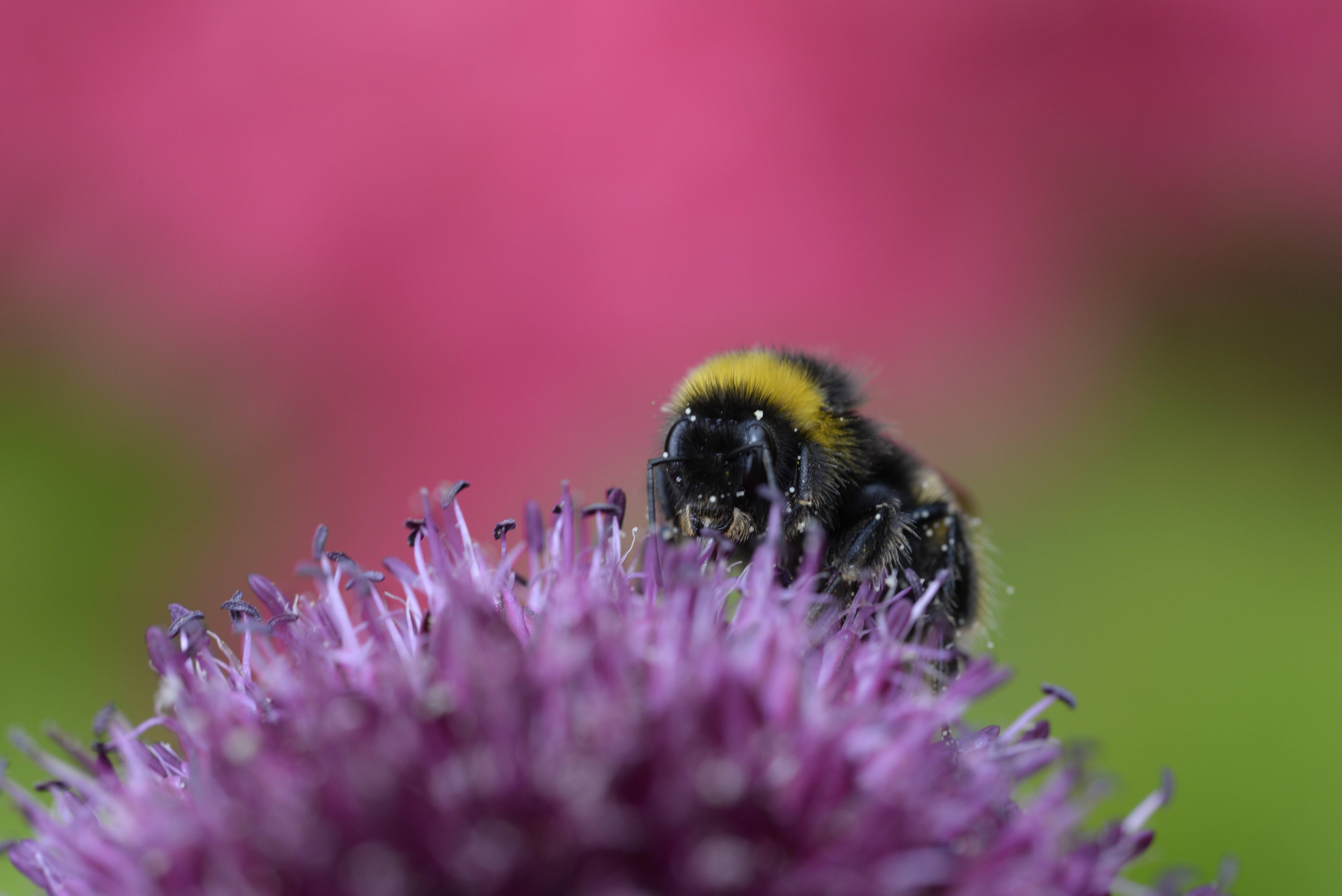 The flash helps give the extra light to really show off the hairs of the bee but it places all the light in a focussed spot. So I had quite a few photos with the light bouncing back at me or spread unevenly. So I added the diffuser to the lens. This covers the flash and allows some light through but more evenly. 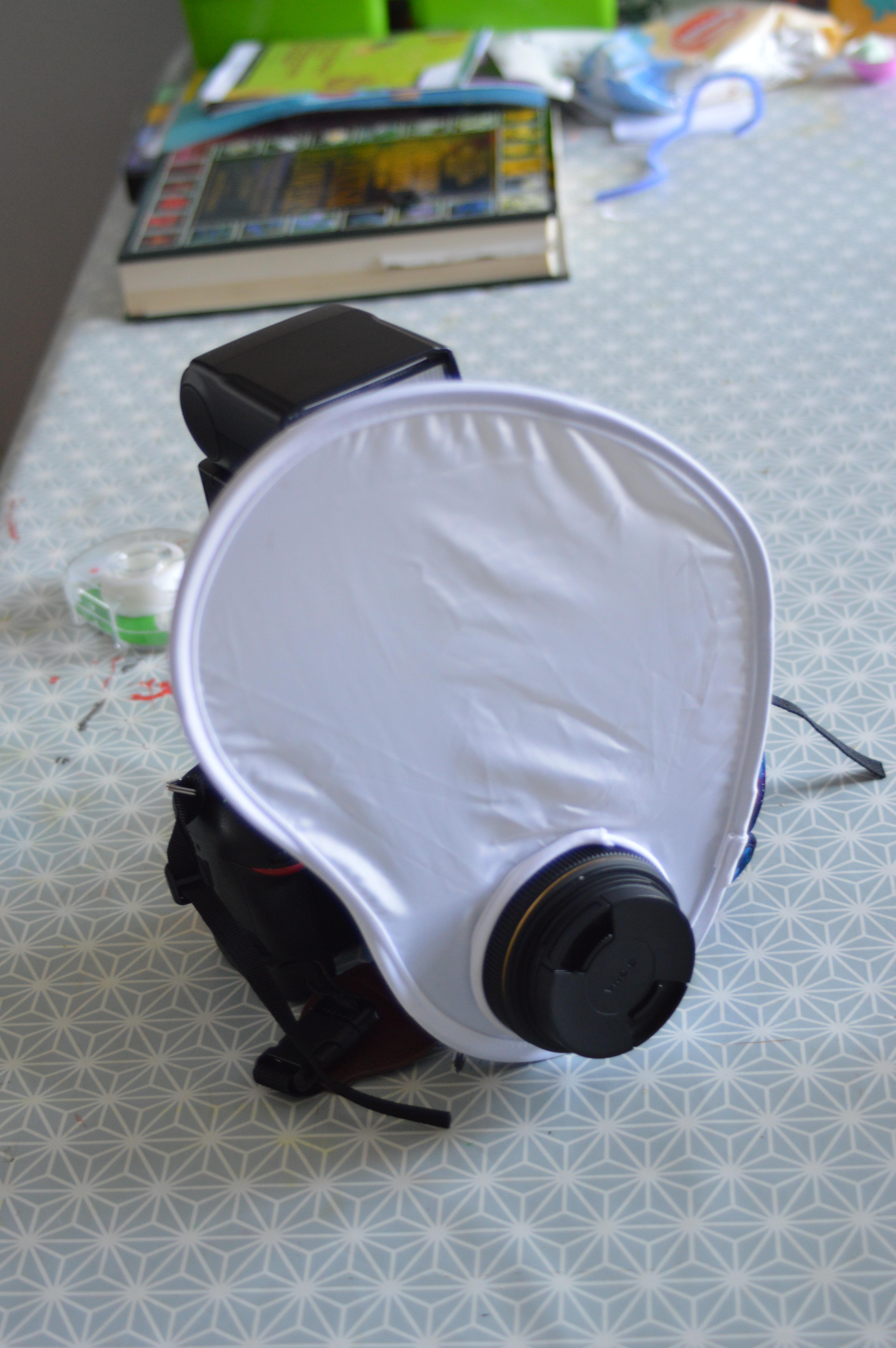 This got me some much better photos. With a little bit of digital editing to increase the colours a little bit more so they reflected the colours the bee and plant really are. I don’t generally edit my photos much after except cropping as I mainly just take photos to illustrate the blog but I was aiming for a particular result here. I was close to results I was happy with.

But they both had elements that were wrong. On this one, the allium is still out of focus. The bee’s positioning meant all of the bee was pretty much in focus though not the most exciting composition. But the bees aren’t that accommodating at poising. 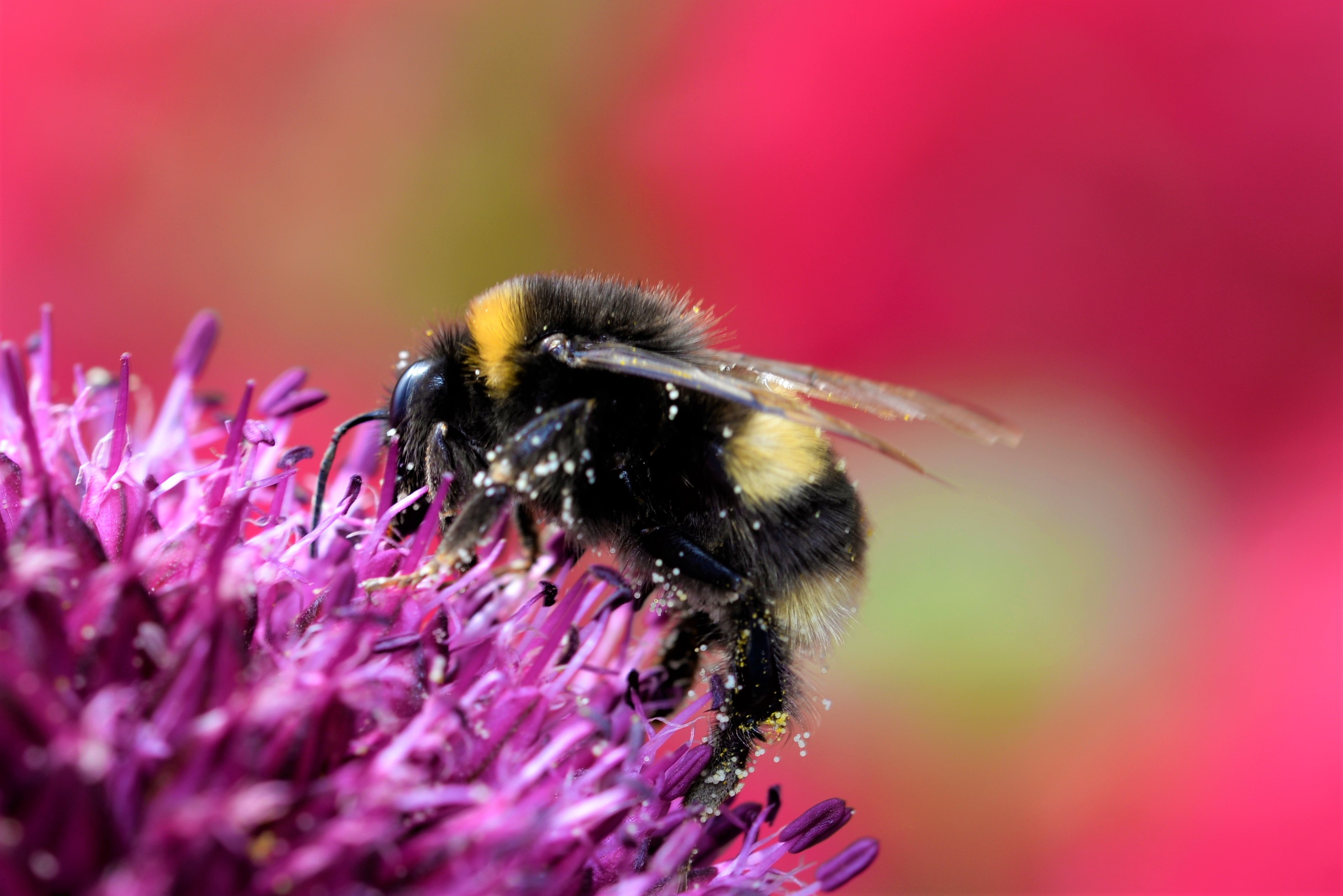 On this one, the position was more dynamic but key elements around the face were out of focus. 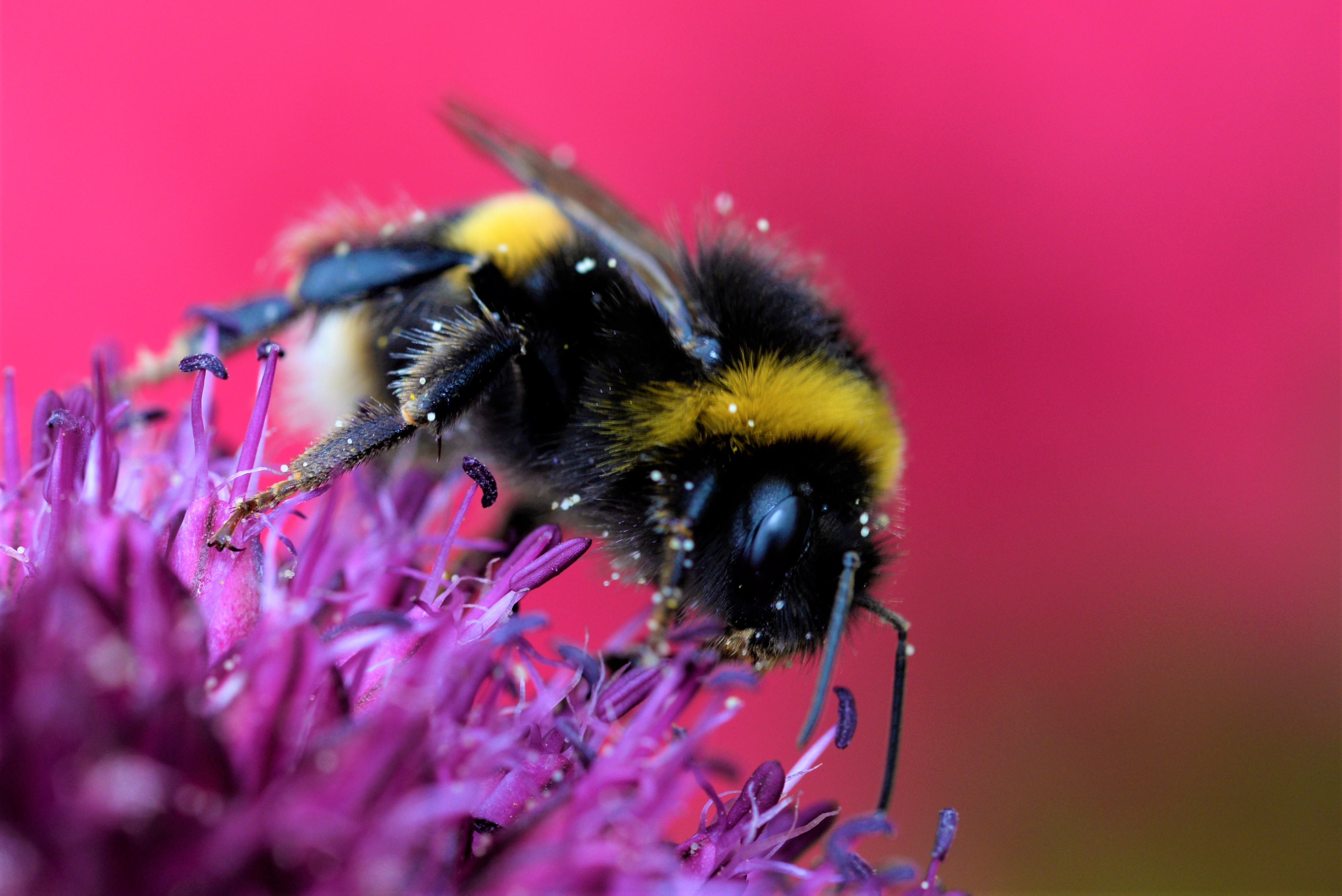 Over the week I’d seen that in the evening the bees become more sluggish and they stay on the allium for longer. I thought I’d try for a few more shots using the tripod to make up for my shakey hands. The camera weighs a lot by the time you add the lens and focussing with the macro is precise. So the tripod allows for less camera shake allowing for things like a slower shutter speed without the photo becoming blurry. With the tripod and flash, I was able to manage a photo with both the bee and allium in focus and the hydrangea background I was hoping for. 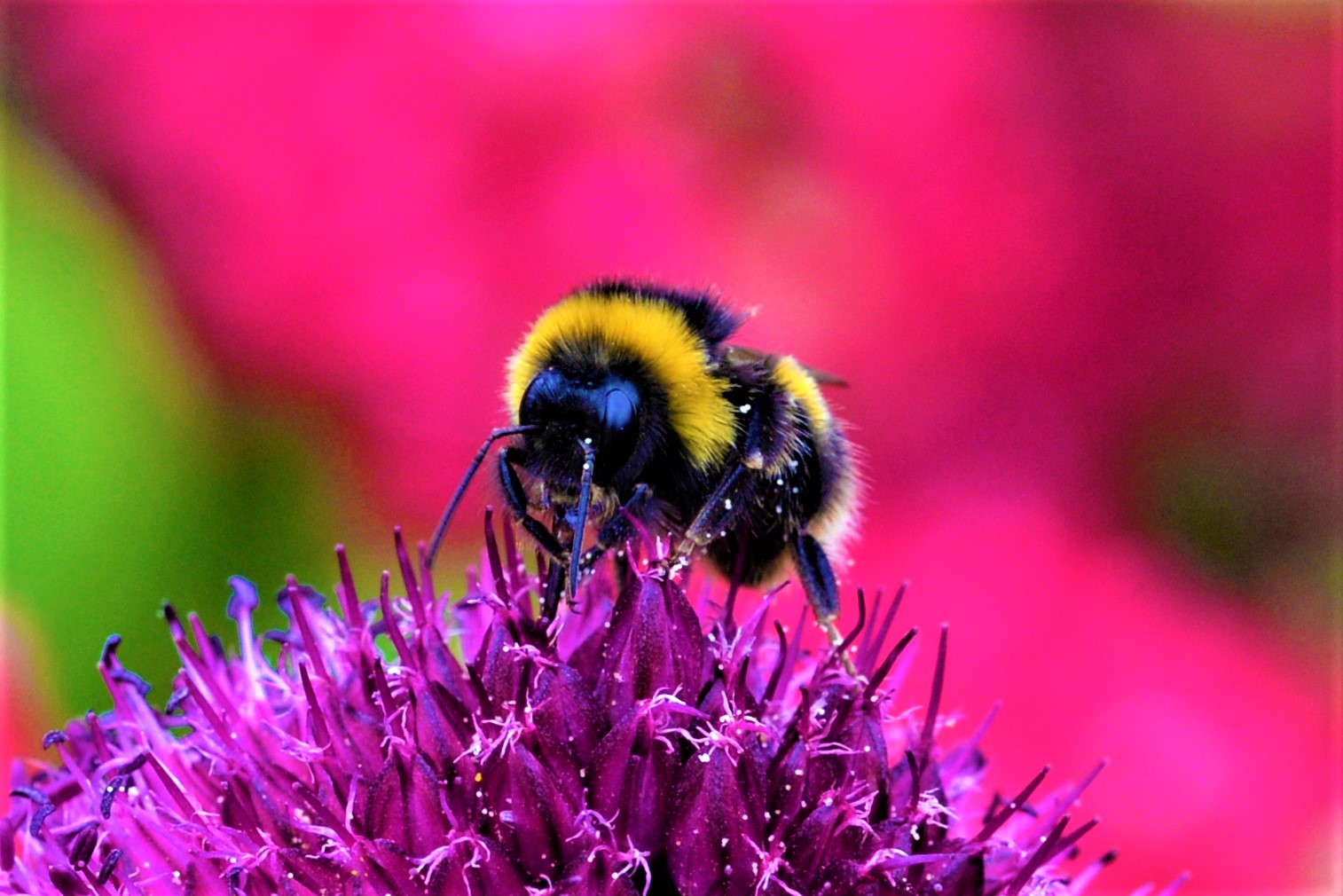 I’m unlikely to win as like I already said many of the winners have been staged photos within studios or certainly look that way. Then of the actual natural shots, there have been some far more stunning and technically better photos. Photos of mammals almost all win the public vote. People seem to be able to relate more and go for that ‘cute’ factor. But, I have enjoyed the process of trying for a better photo. If I do get a day with better natural light I’ll try for some more photos. I’ve probably got another few days before the allium goes over. But Amy is complaining that I am on infringing on her photo specialty of macro, so back to birds for me. Thank you if you’ve read this far and tolerated me writing a different six on Saturday again. If you fancy seeing more garden pics or taking part check the participant guide.