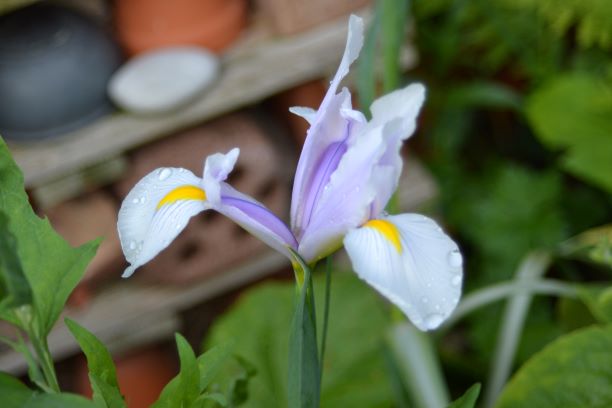 A week of rain followed by a week of the sun has led to lots of plants opening their first blooms of the year.  So much so that it was hard to choose just six, but six is the rules. So let’s get on with these absolute delights.

The first of the Dutch irises are out. So far they’ve come out blue and white. I loved my Reticulata is spring so I’ve been looking to expand my irises. These were a cheap Tesco purchase and they seem happy in the border growing out of ferns and hardy geraniums. 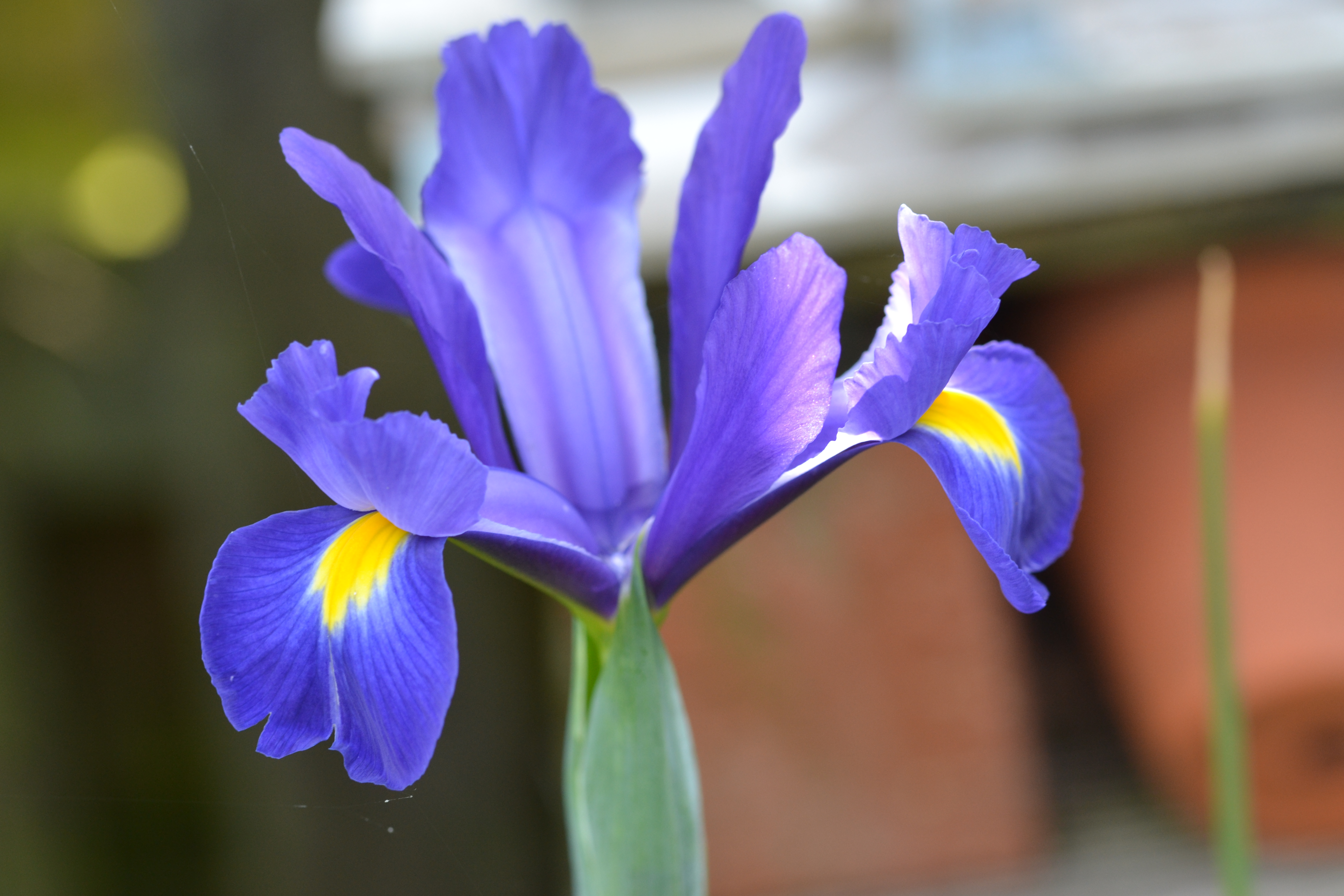 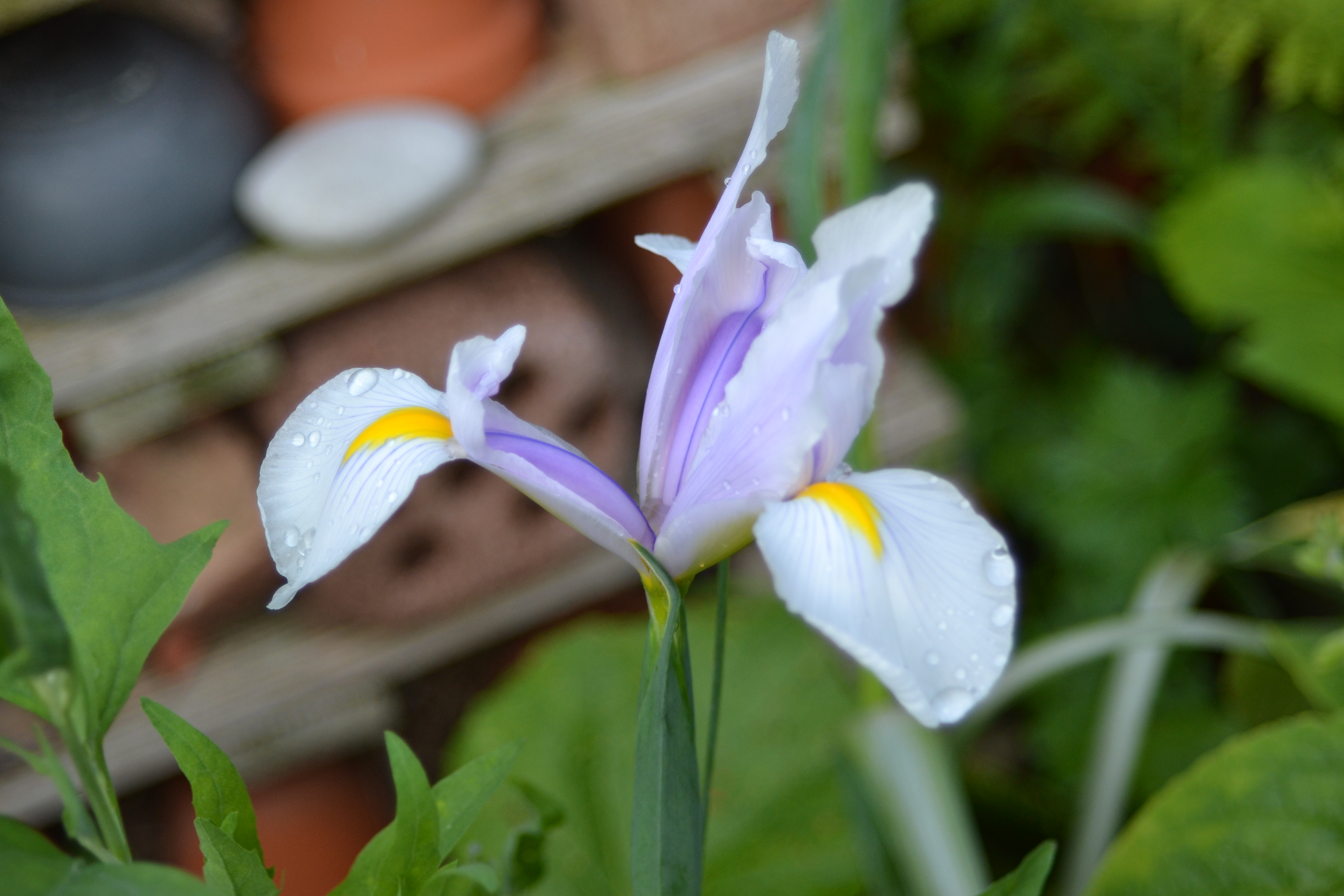 We had our first harvest of early potatoes. These were Duke of York. They’ve grown to a reasonable size. We used the small ones to go with a chicken pie and got some larger ones left for another meal. There are two more bags still growing so we’ll have some more in a few weeks. They were quite a tasty variety. I’d grow them again. This pot I earthed up as we went. One of the others I filled completely at the start to see if it makes a difference. 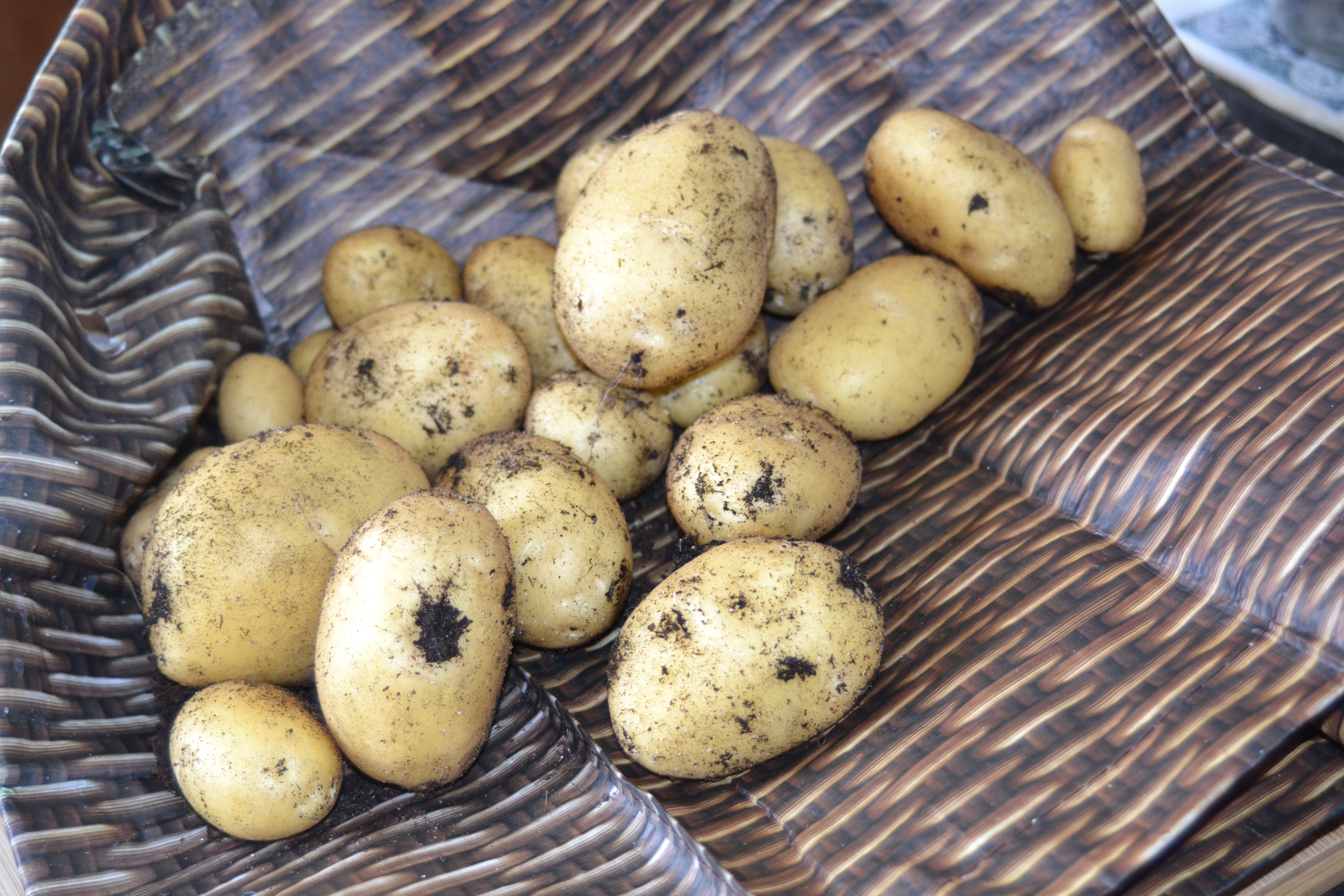 I bought a little container pond set from Thompson & Morgan when they were on offer. The kit came with a plastic bowl, planting basket, aquatic compost, and gravel to go on the top. It has come with 3 bare root pond plants. Acorus calamus ‘Argenteostriatus’, Iris pseudacorus, and Pontederia cordata. The bulbs are starting to poke through. I’m not sure how healthy the bulbs were so I’m not sure they will all come up. The hope is to get some dragonflies in. The water is getting a bit of algal growth so I’m having to scoop it off while it sorts its equilibrium. 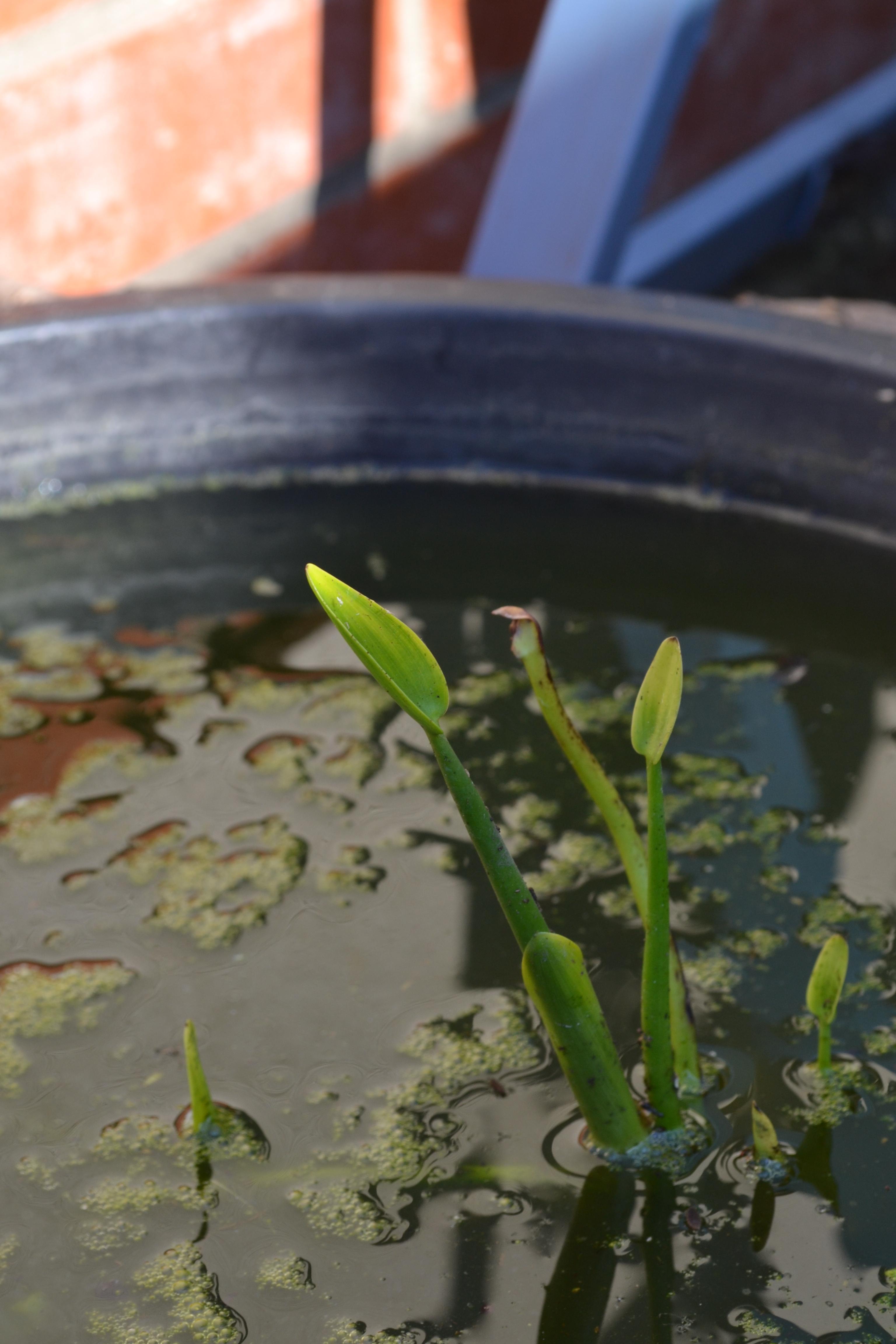 I’ve used driftwood around the outside to cover part of the plastic and form a slope up to it. 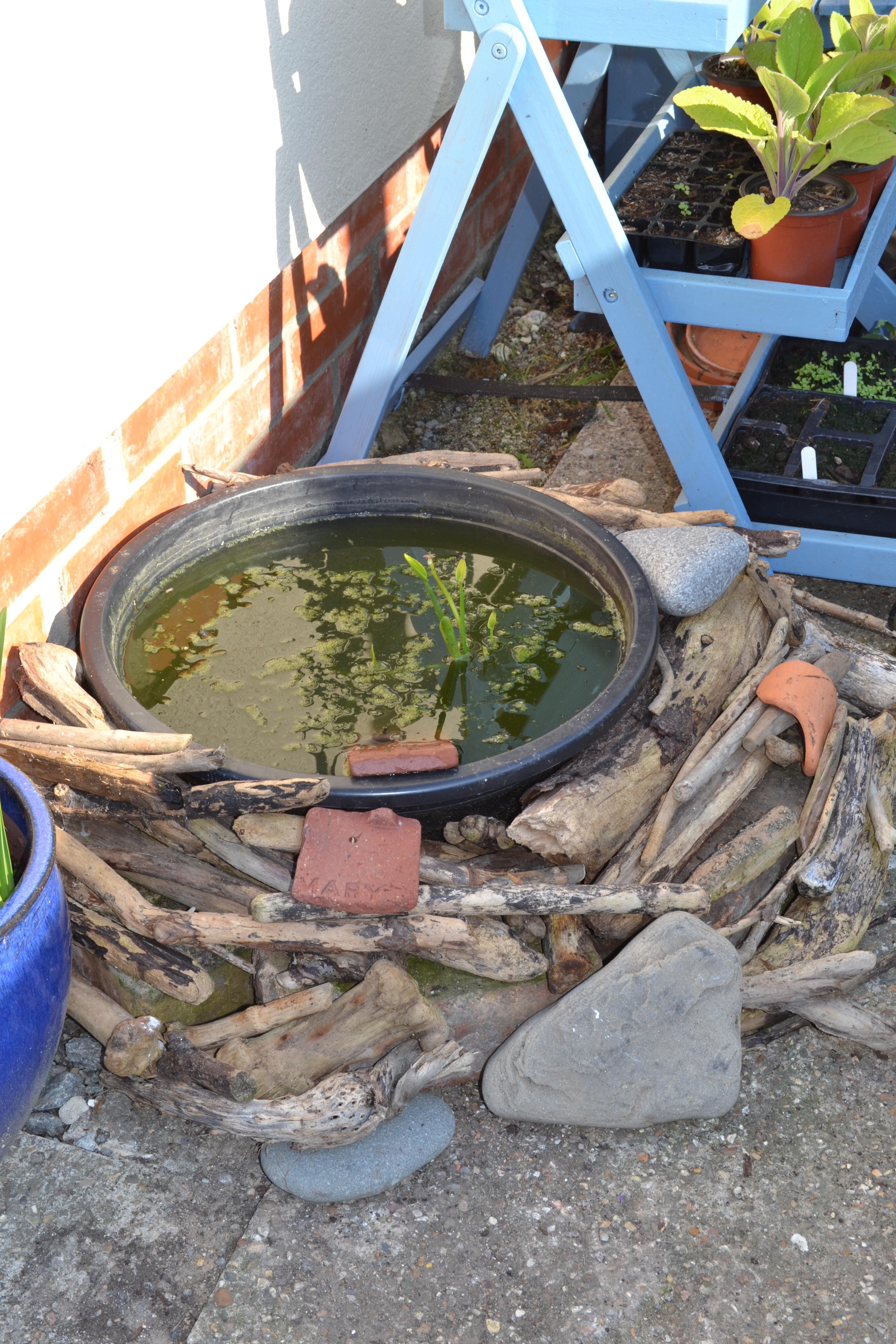 At the start of lockdown, I gave Alice lots of the seed packets that had come free with magazines that could be sown direct. She scattered them all over leading to a mass of marigolds this year. These were a cornflower that I think wablack ball. The flowers are quite pretty little black fluffy things. 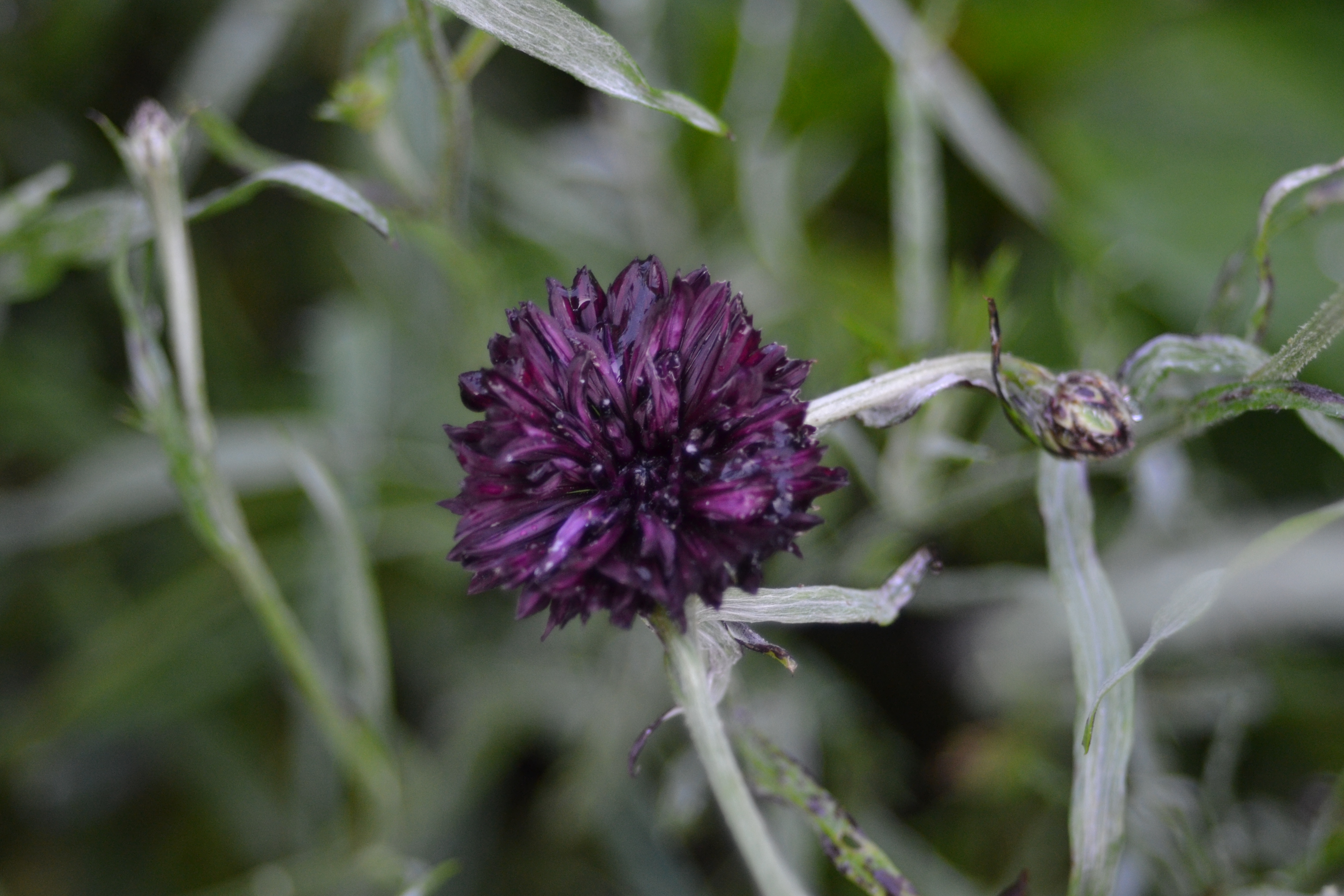 The stems are pretty ugly with a wispy white look that looks pretty diseased. Alice must have emptied these into quite a small space as they are all coming up together, so I’ve rigged up a support of driftwood, again, along the edge of the border with string to tidy it up a bit. 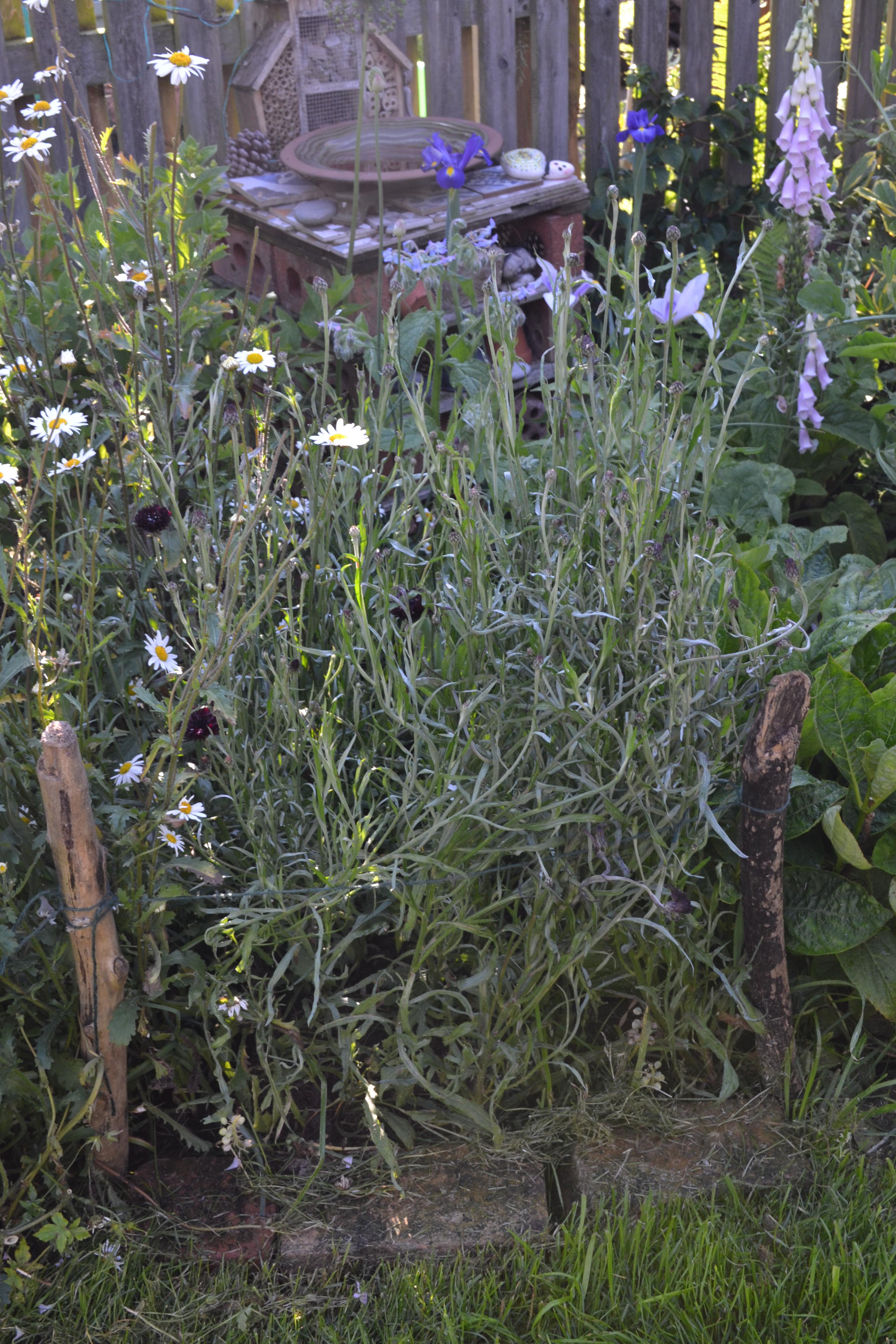 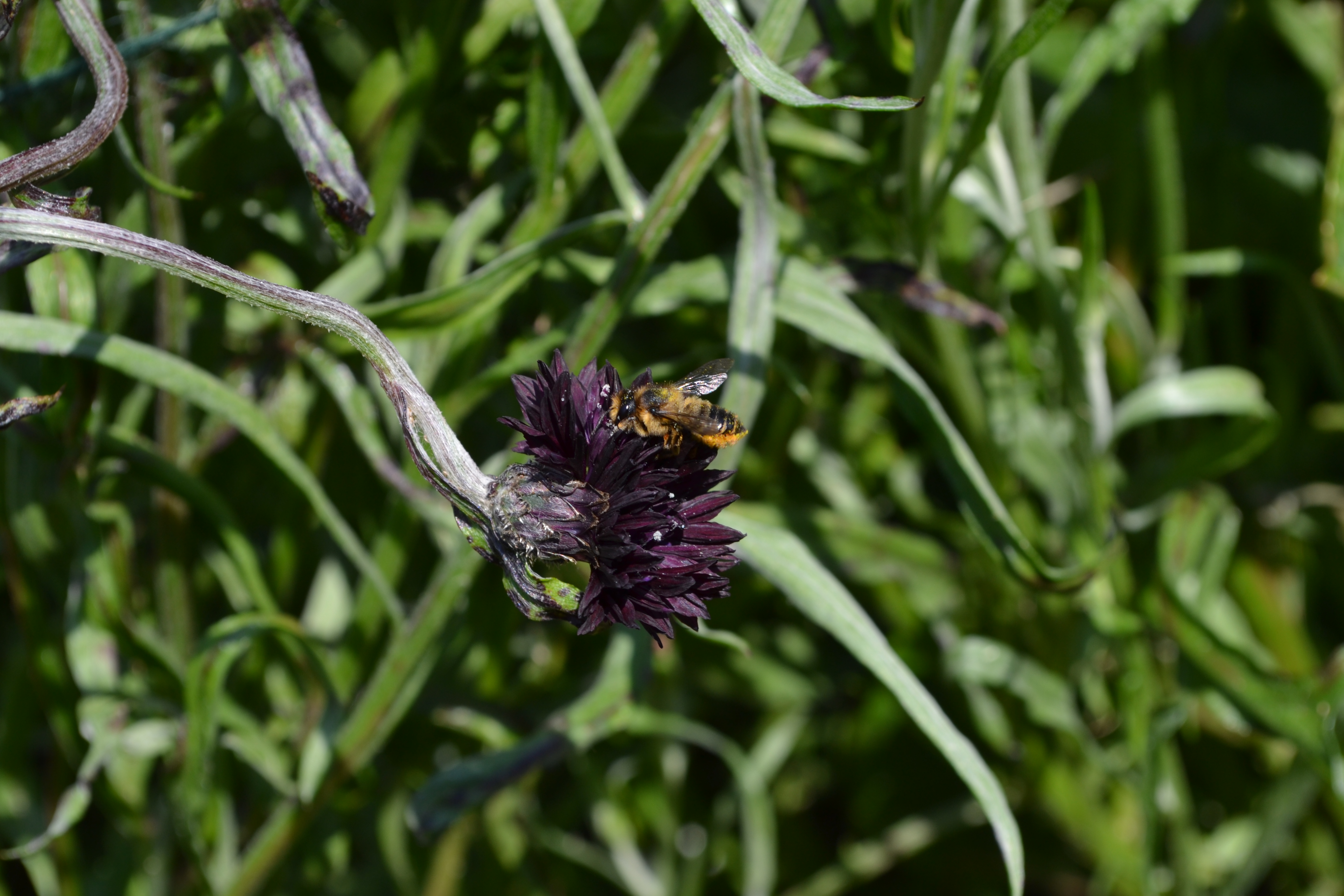 The passionflowers have all clumped together on one bit of fence. I’ve spread the growth out a bit so it can gradually turn the whole section green. We have the first flowers which are a lot earlier than last year. 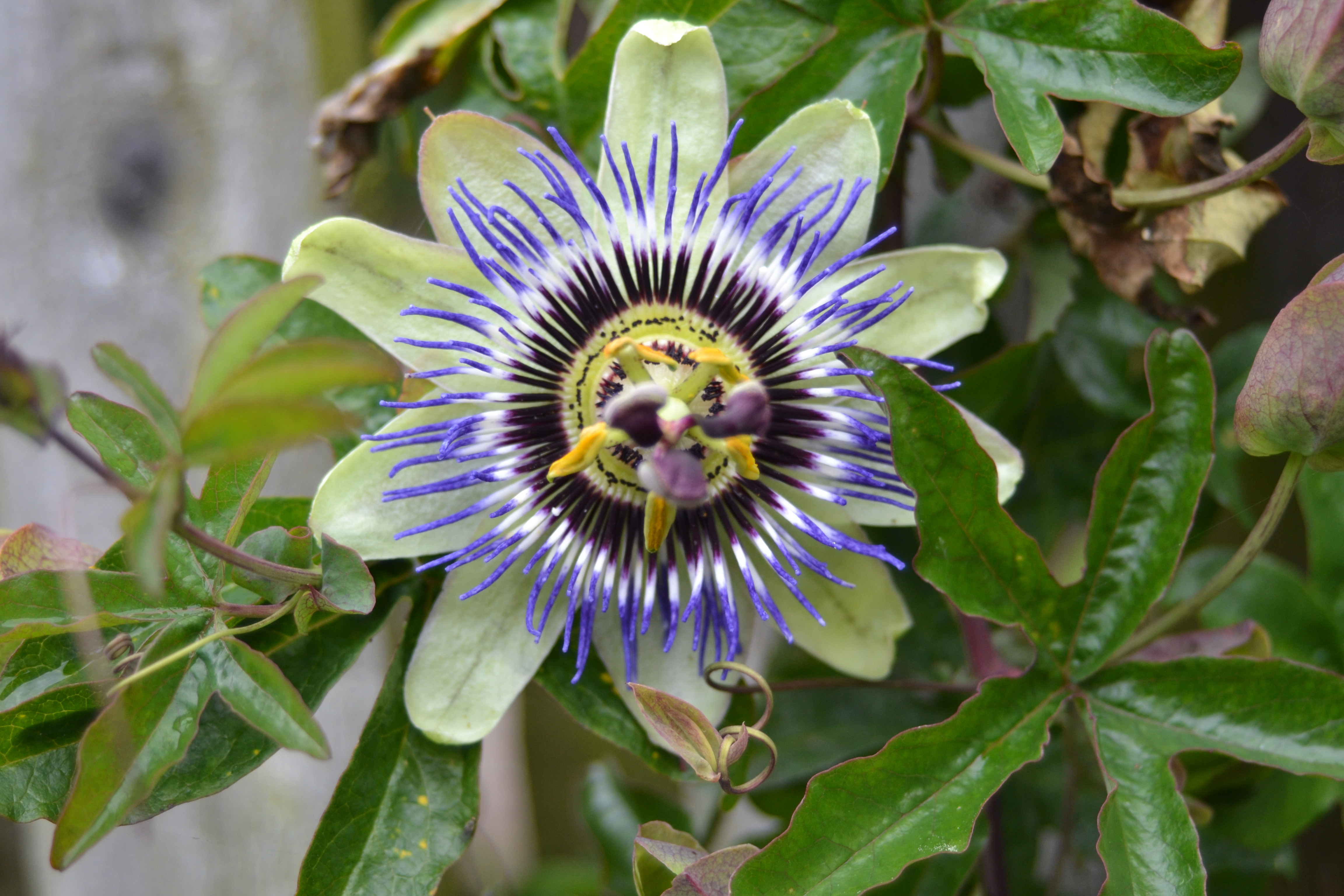 This is one of my largest hostas grown in a very large pot. It has large blue leaves making it slightly less appealing to slugs. It is coming into flower with its large white blooms. 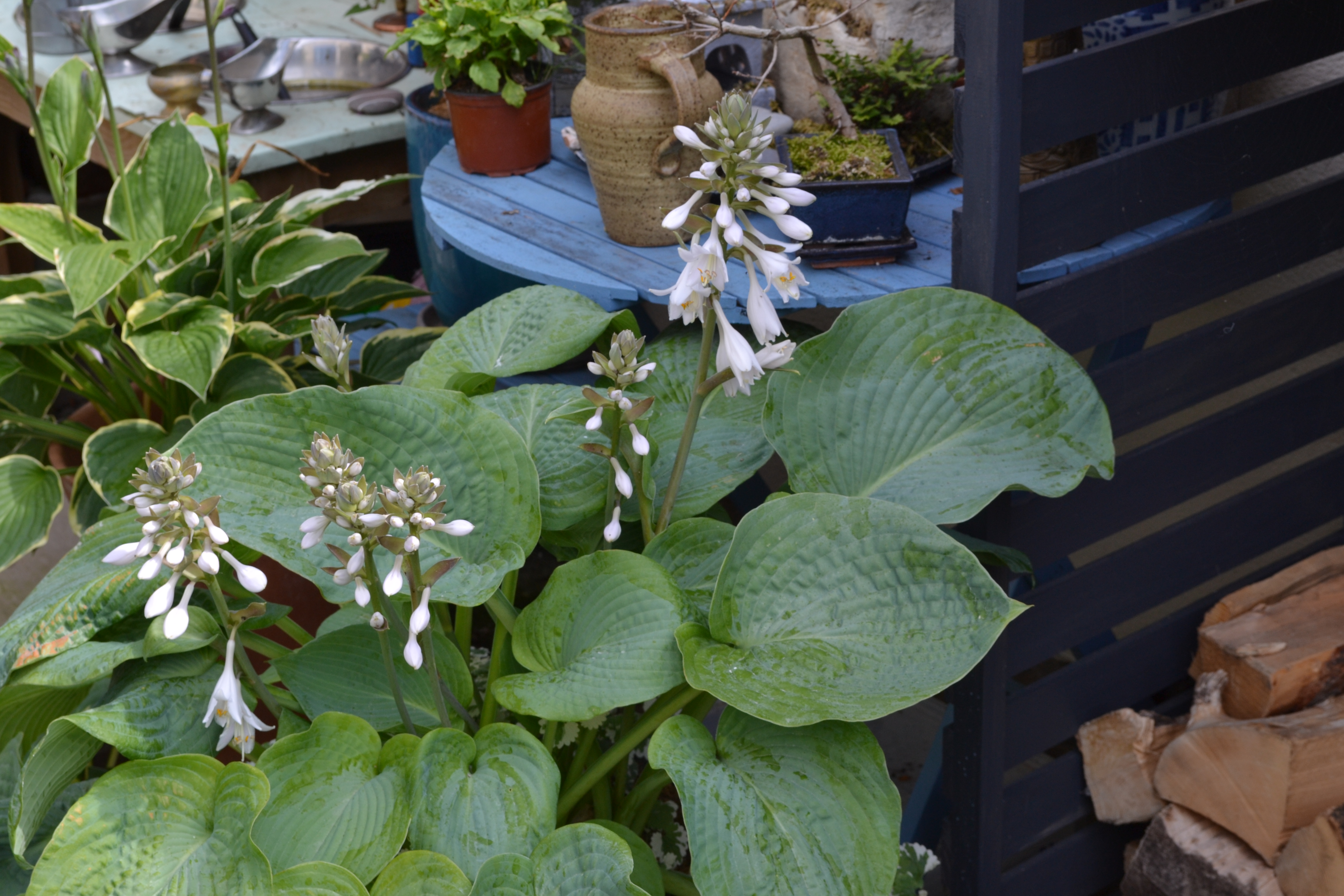 Some people cut the flower stalks off as they want the plant purely for foliage, but I think they are rather nice. 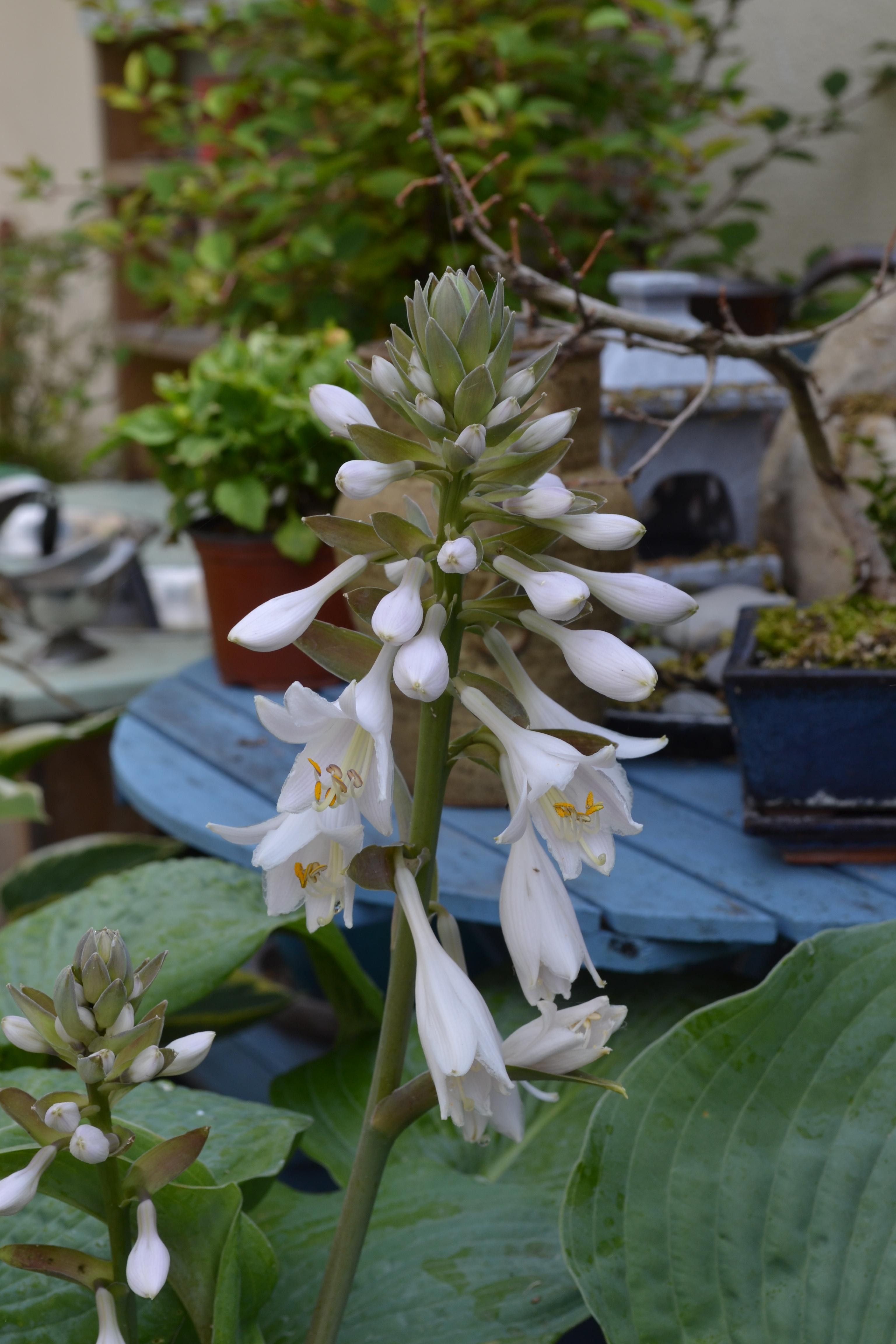 The garden is looking lovely right now but we’ve had the news that we are going to have to have more building work as the render was applied wrong. This means I’m going to have to clear the patio again at some point in the future. With this in mind, I’m going to be looking at whether any of the patio plants can be potted into the border. A lot of the current pots are temporary like the veg pots and the dahlias but have to see if I can find spots for some of the hostas and heucheras as I don’t fancy them all sat on the lawn again. I’m also adding a second shed so I’ve got the dumping area to clear ready.