It’s been a chillier week. The fleece came out to protect a few of the less hardy veg options but I think I’ve got off pretty lightly. The potatoes are still looking healthy. The dahlias are surviving. With lockdown, I’ve been busy growing far more than I really need. So, for this week’s six I’m looking at six different methods of propagation I’m using to multiply my plants.

With all the extra lockdown time I’ve sown a lot more seeds than normal this year. Between filling the borders and grow your own the mini greenhouse has been constantly filled. The dahlias from seed are coming on well. We’ve been eating the first of the radishes grown from seed. It’s probably the easiest method of propagating mass numbers of plants. How else could I end up with enough dahlias to fill a garden several times over?

Here are some free magazine marigolds destined for my charity plant sales. I grew them as a quick and easy money maker. 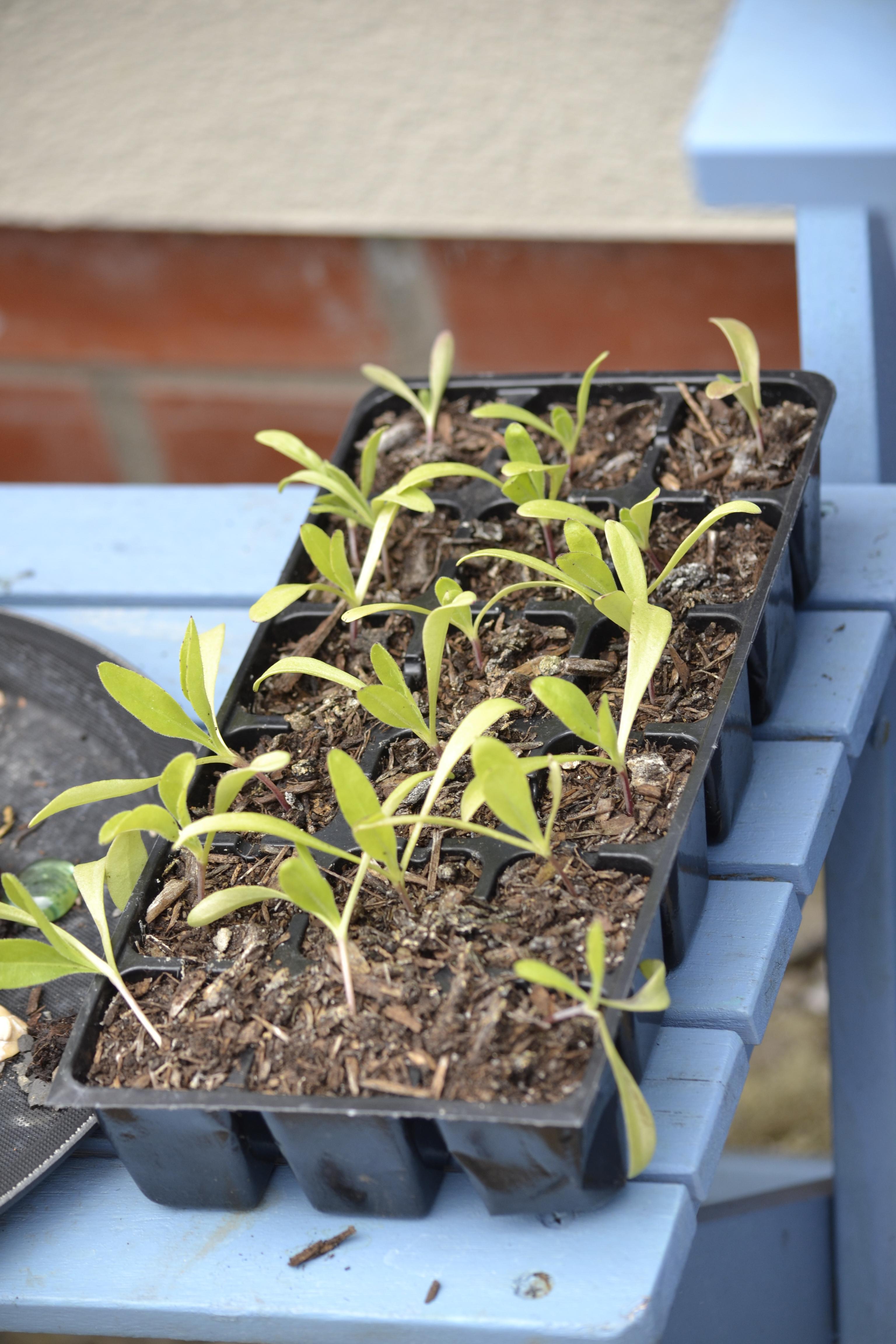 I bought one packet of silver dust and I’ve ended up with a mass number. Some I’ll sell on. Some I’m keeping for autumn interest. I grow these for the silver leaves. They make a good contrast against the dark-leaved dahlias. 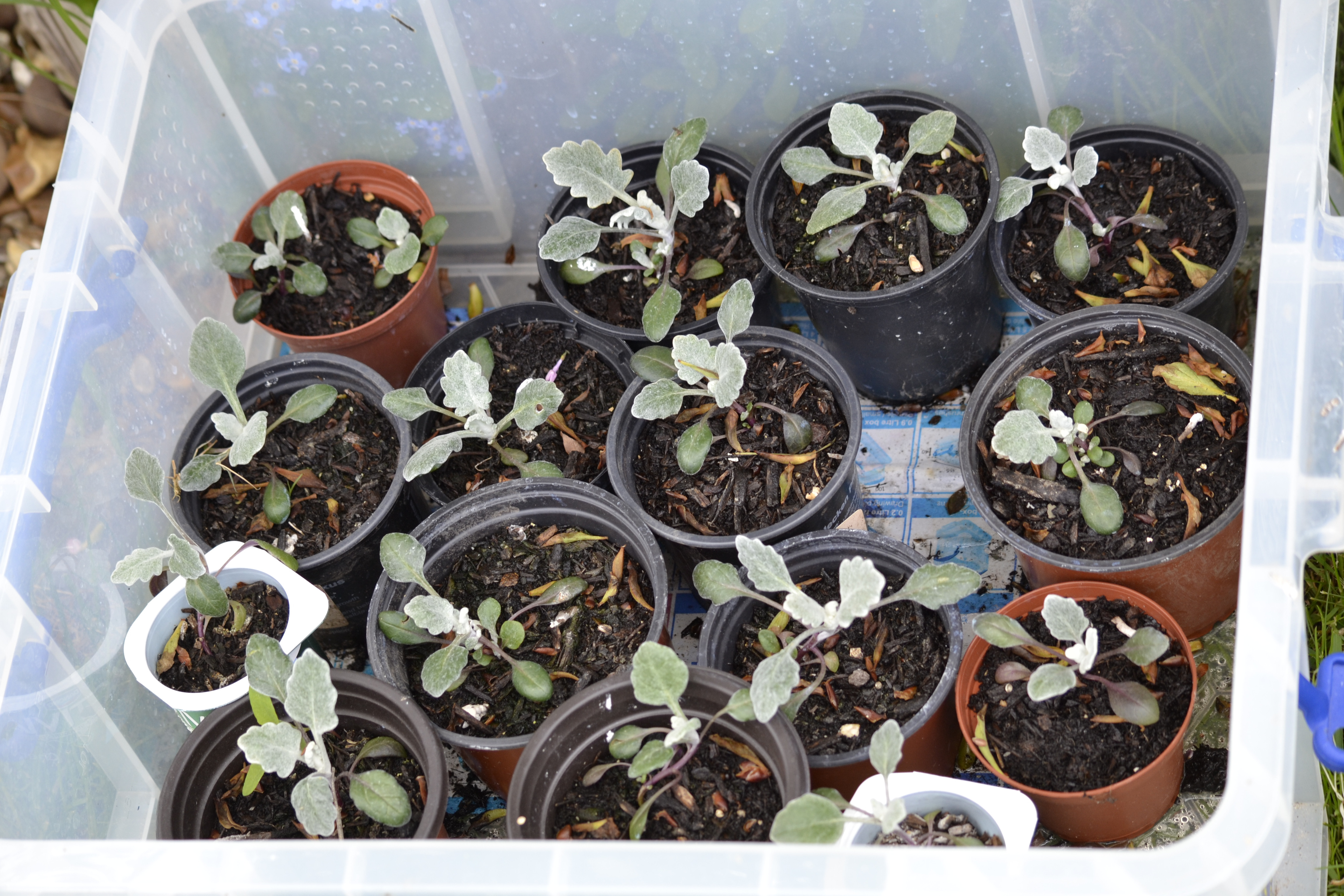 I started off a few perennials back in February/March time. The lupins were Alice’s choice. They are getting to a nice point though I don’t know that I’ll get flowers this year. 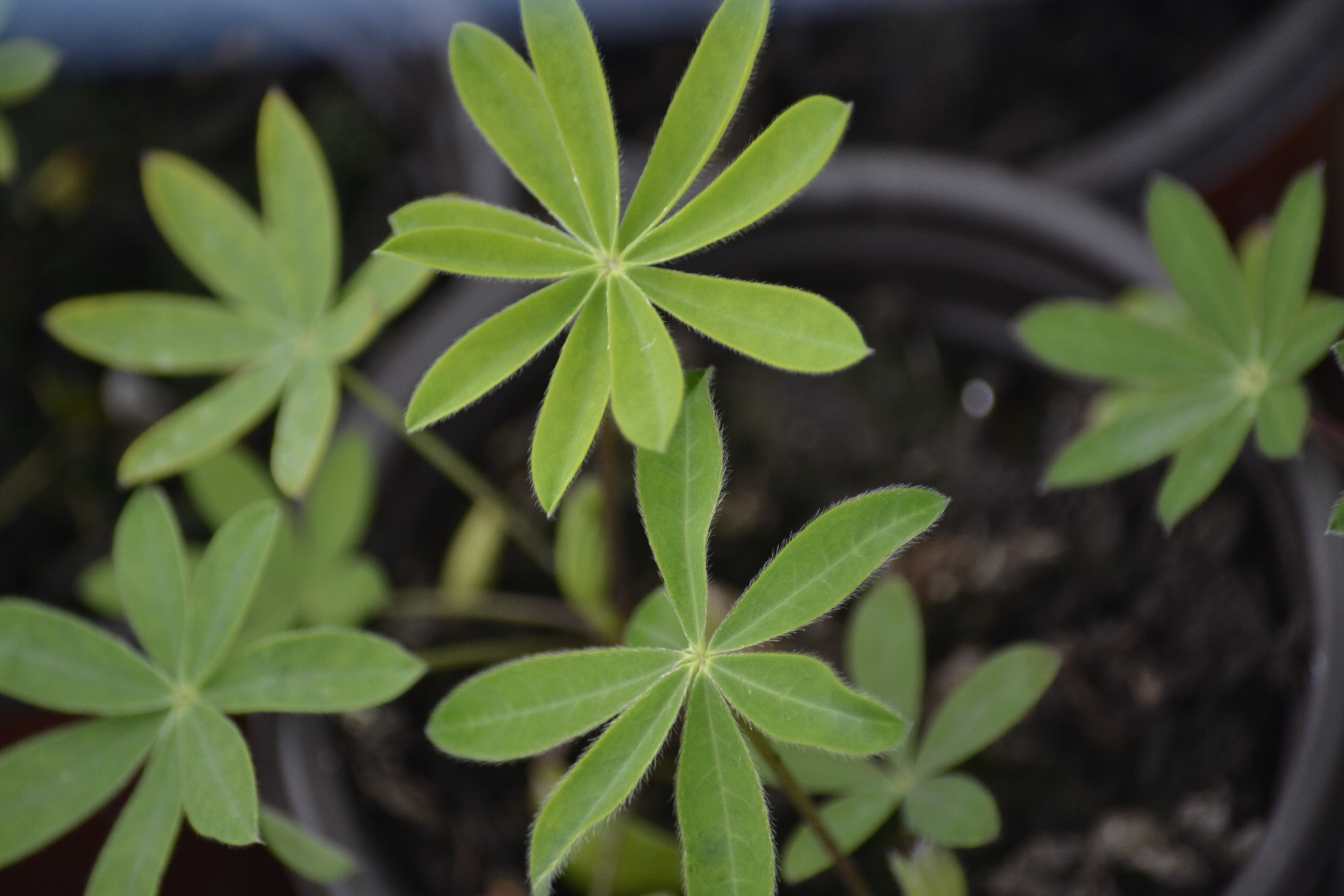 It’s a good time of year to be taking softwood cuttings. You can take them now and they’ve got plenty of time to grow on and in some cases flower this year and toughen up for winter. Last week’s Beechgrove garden reminded me it was a good time to take dahlia cuttings. Tea break gardener has a good guide on how to do this. In the case of dahlias, this is supposed to help make the plant bushier as well as increasing your stock of plants. These tuber grown dahlias each had multiple stems growing up so I’ve taken a cutting off each. Then they had a soak in the washing tub before being placed in a propagator. I probably won’t keep them in long as they are a bit big and these root fairly quickly. I’ve also taken cuttings of the heuchera as I’d like a bigger number of the lime marmalade so I can make more of a tapestry in the front garden. 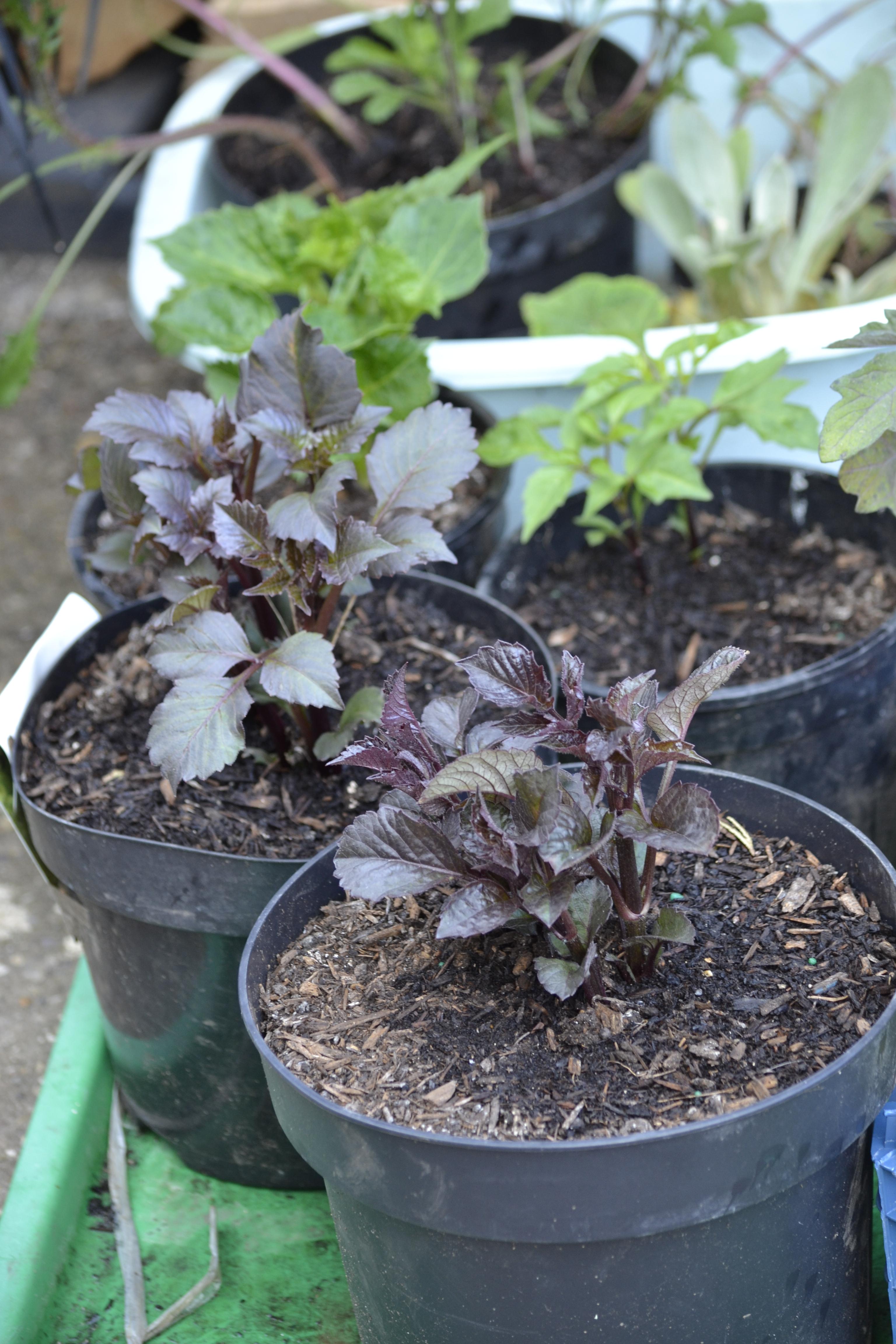 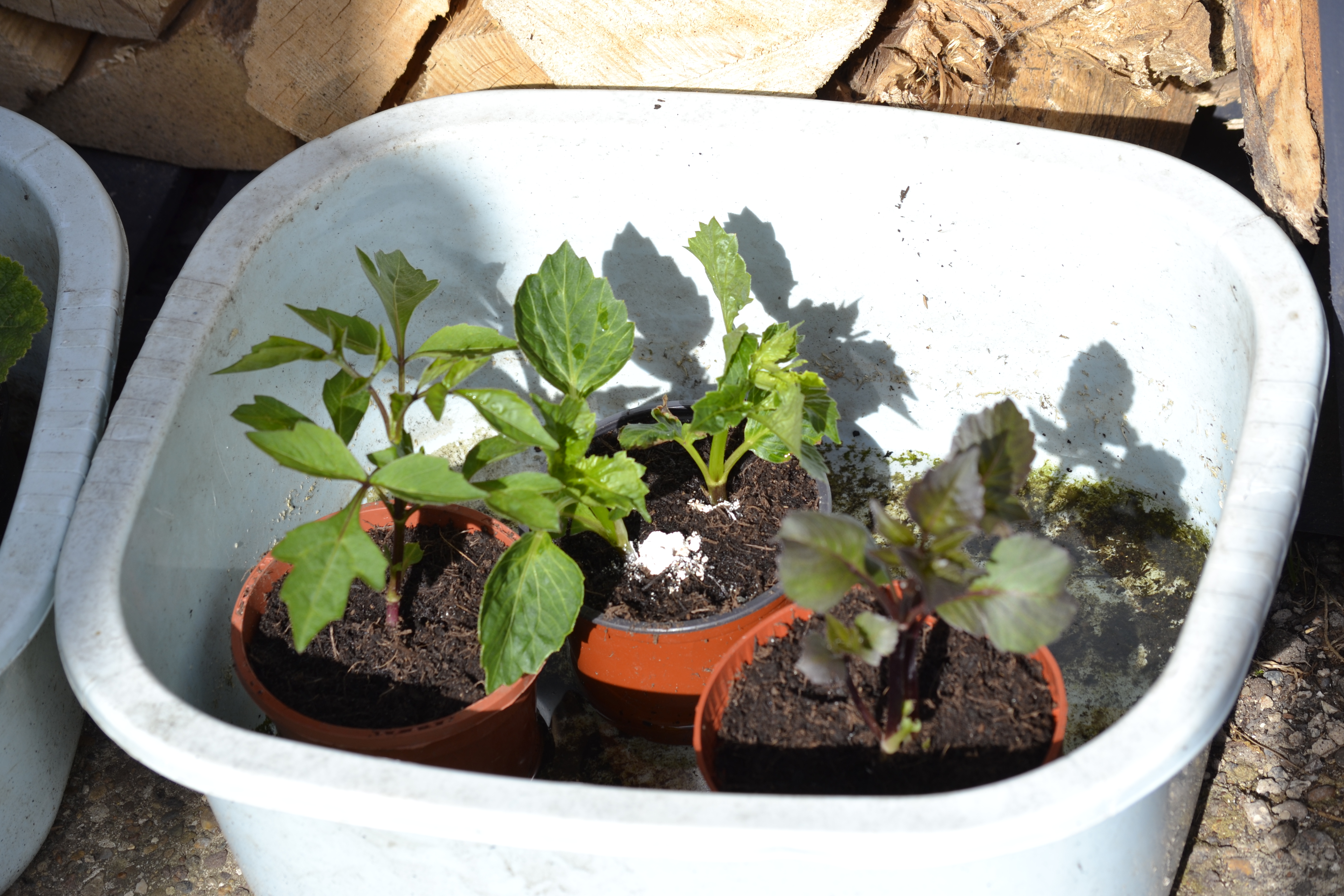 I took a few hardwood cuttings back in autumn. These are Cornus cuttings, dogwood. These are fairly straight forward. Cut sections, put in rooting hormone, and put in compost. Some don’t take. I reckon about half to a third root. But it usually needs a gentle prune at this time of year before its hard prune in spring so I’m only taking prunings that would otherwise be shredded. I took a few hydrangea cuttings as well. Again only one seems to be thriving but I don’t really need more of either of these plants it’s just pretty straightforward to do. It’s a useful method for if you are making willow structures as willow cuttings root easily or else for hedging material. 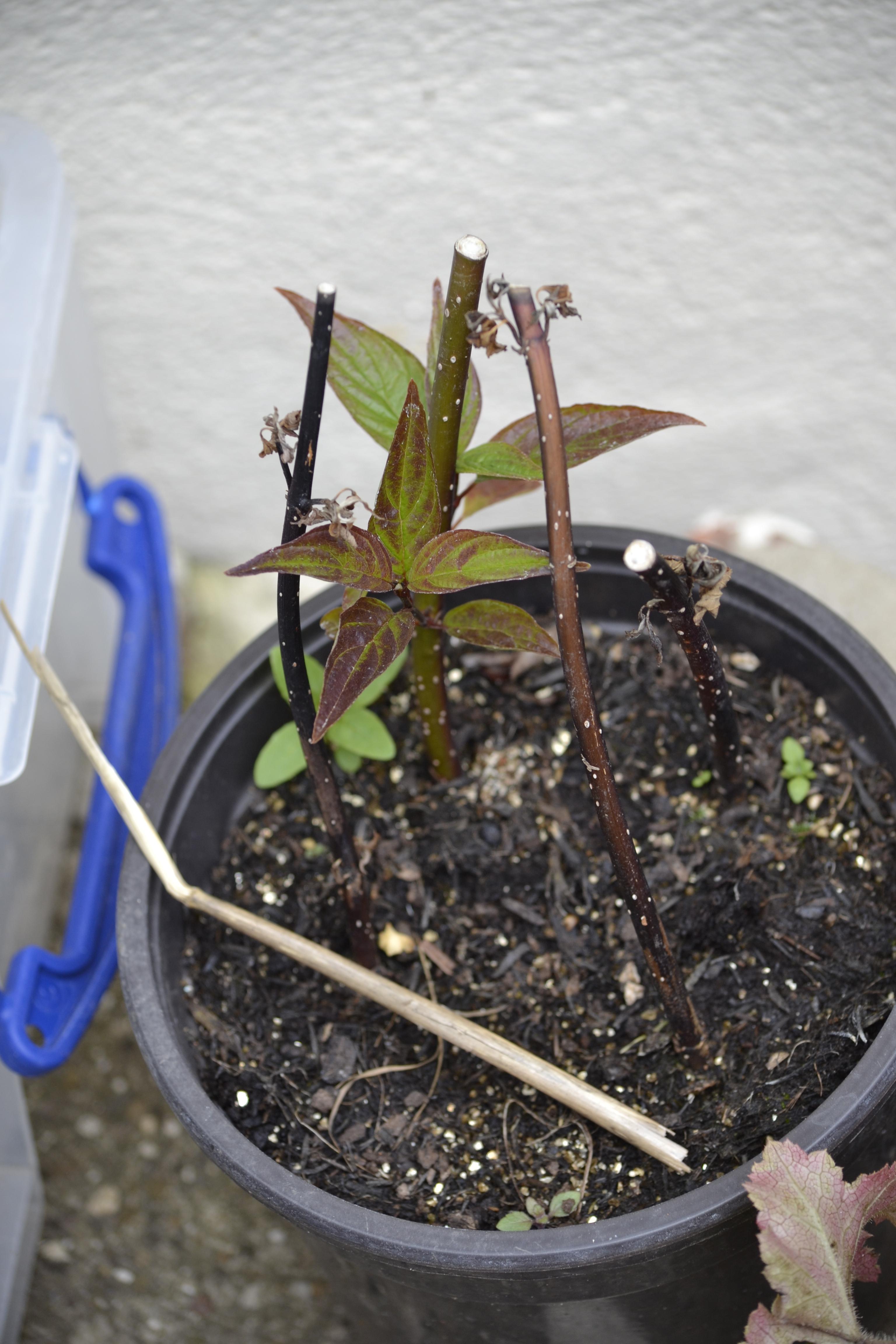 We are getting a bit late on in spring for dividing but this geranium is set to take over the garden if I don’t dig some out. Most excess has been potted on for plant sales. One big patch has been moved to fill a gap that was getting quite weedy. This will suppress a good bit of ground. 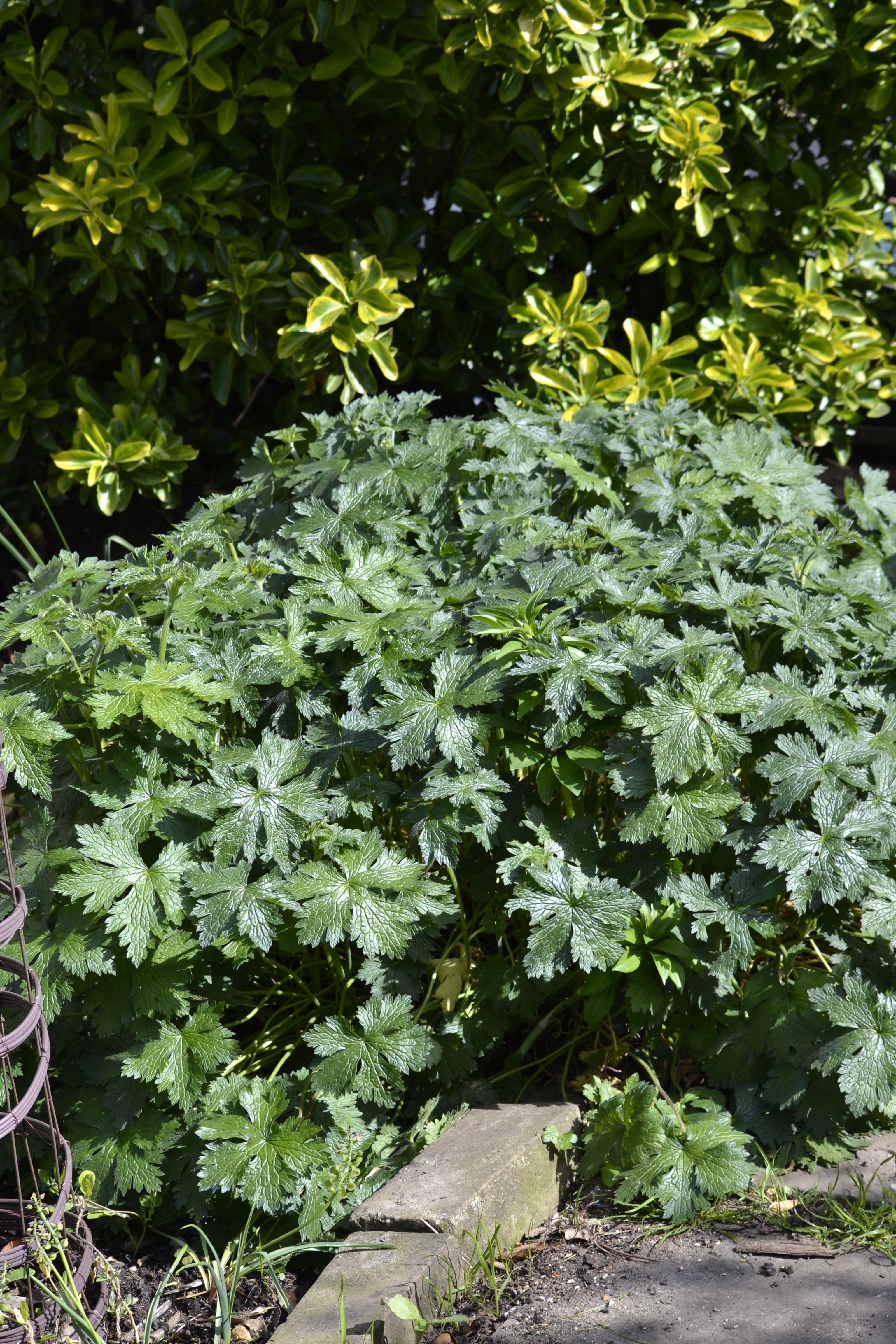 The divided section will grow up quickly enough. 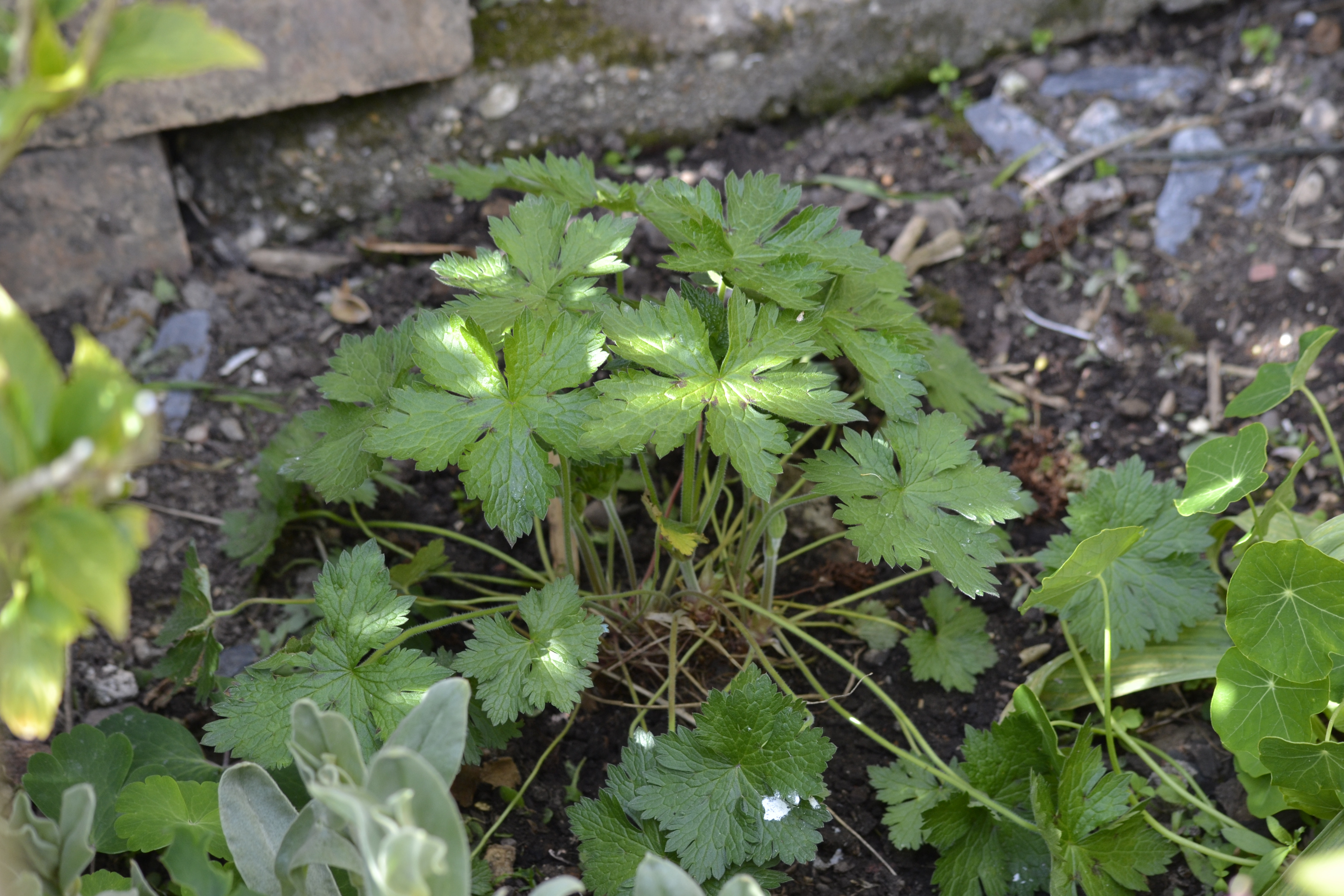 I tend to use water propagation for more of the house plants but a few of my garden plants have taken to water propagation well. The hebes seem to root well this way. The Fuschia also seem to like this method of propagation. I take short cuttings and make a little cut along the stem. If it has too many leaves or too big leaves I take a few off to stop water loss. These root in the water and then eventually they’ll be potted into the soil. Initially, they need watering more while they adjust to being in soil but they don’t dry out as much with this method as opposed to softwood cuttings. You can use liquid rooting hormones but these take easily enough. 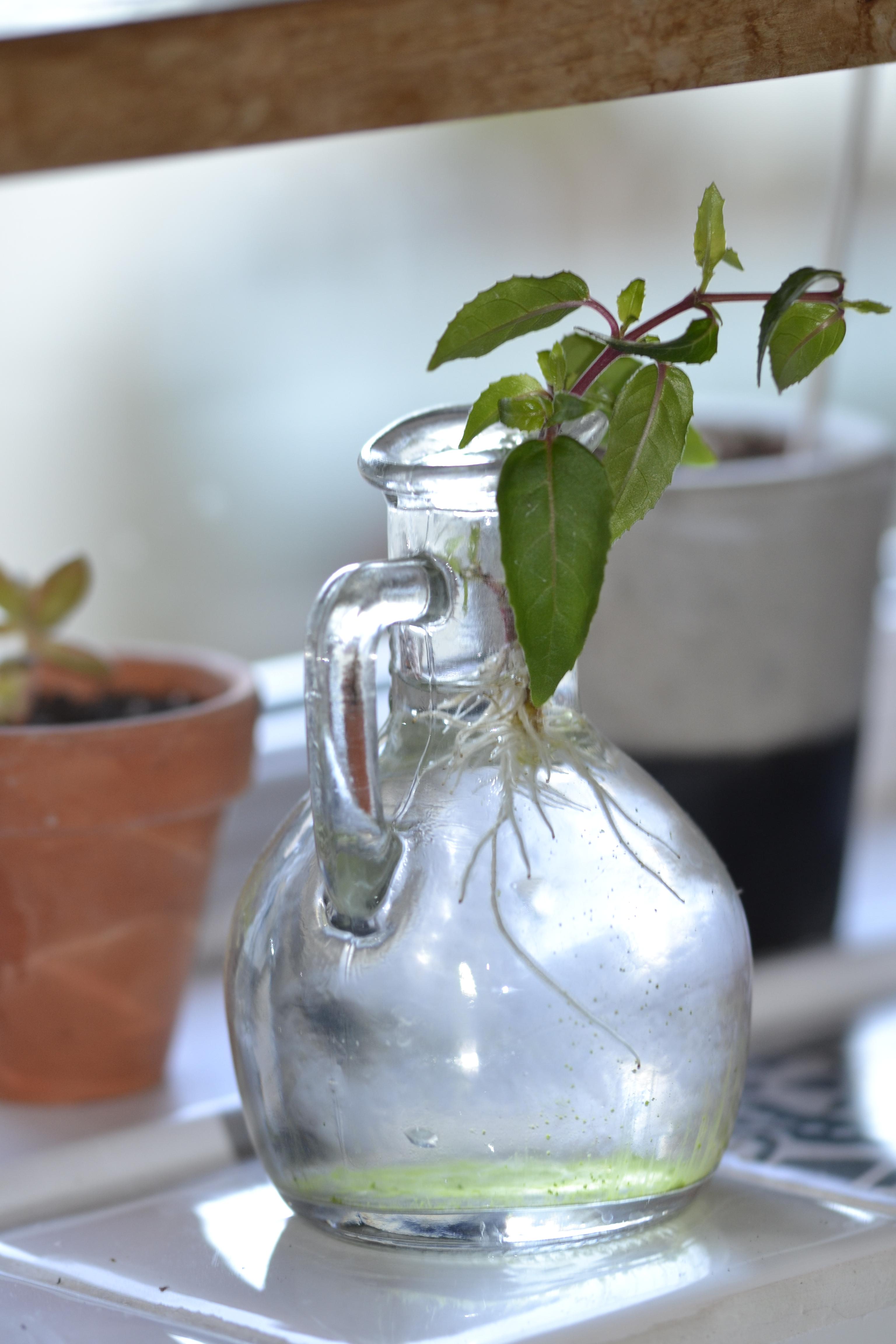 Layering can be done in a number of ways. It is a good method for propagating some shrubs but I only really use it for climbers. Honeysuckle and ivy work well but currently, I am trying to take cuttings of my hydrangea petiolaris, the climbing hydrangea. This climber forms aerial roots so it is pretty easy to layer. Pull a lower branch down to the ground and partially bury. I’ve put a stone over to keep the branch waited down. This can be left to grow and then I’ll probably cut if from the parent. It’s a lovely climber with lush green leaves and nice white florets in summer. Best suited to shade. It takes a few years to establish but once it does it’s a great plant for filling spots many other climbers don’t like. It’s popular with wildlife, the flowers are nice and open for pollinators and the leaves provide plenty of cover for birds. A variegated form ‘silver lining’ has come on the market if you want something with the look of ivy but a bit better behaved. There are a few other types on the market but sadly you rarely see them in garden centers. 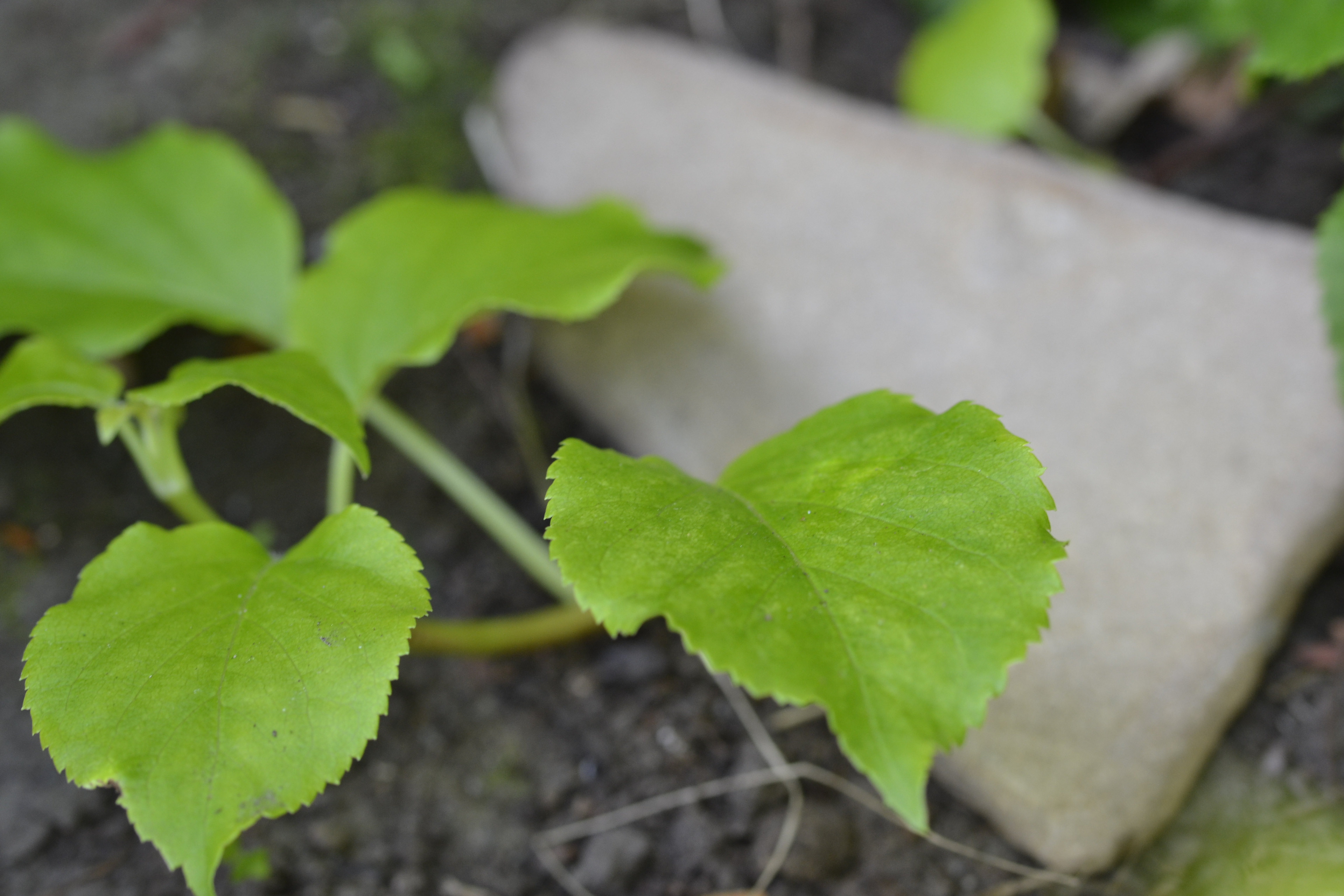 I hope you are all keeping well. We have Alice’s birthday to celebrate so I won’t be reading the other six on Saturday posts until later on. Four years on she has brought so much joy to our lives. In these strange times, she gives us structure and enjoyment to each day. Enjoy your Saturday.