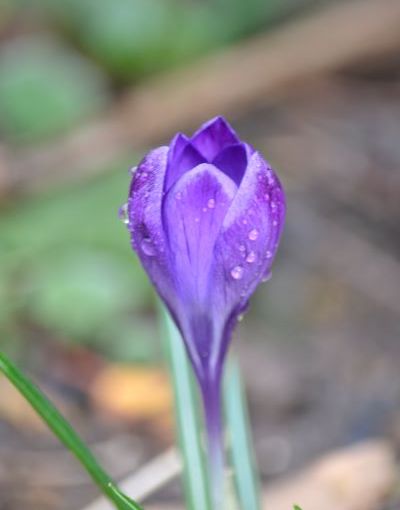 Well, we have a rare event, a six on Saturday on the 29th of February. It’ll be around 28 years until we get another. If I’m still doing Six on Saturday hopefully the garden dreams will have become a reality by then.

I planted 100 croci in the lawn a few months back. They often get lost in the border so it utilises the lawn space by providing flowers for the bees before I start mowing again. The first ones are coming into flower. I think some may have rotted in the wet weather but I think enough have come up that they should establish. I’ve not got the fine spread we saw at the in-laws last week but in time they should spread. 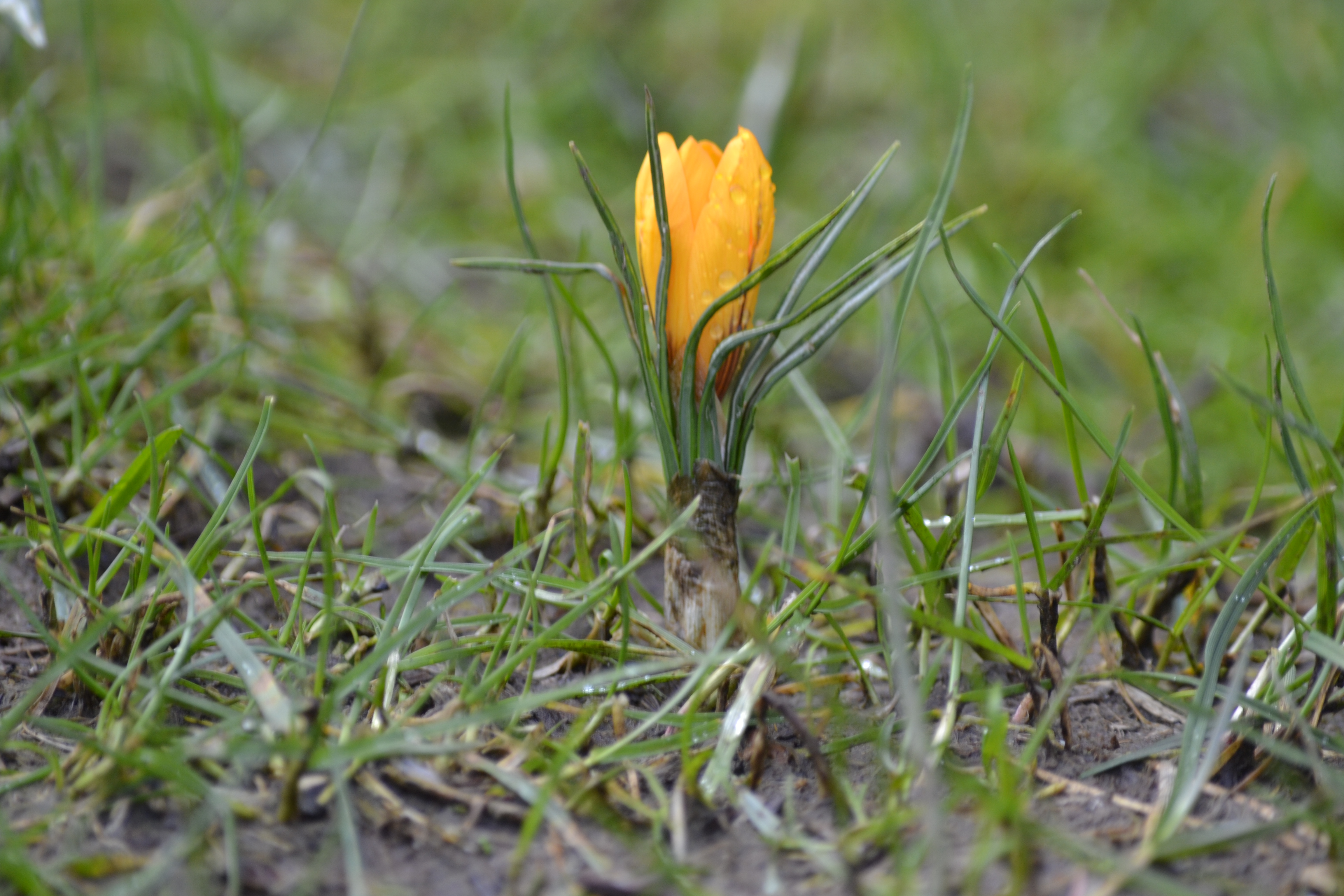 I have a few croci in the borders from previous years. They often get lost in the undergrowth but here is one visible looking pretty with the rain droplets. 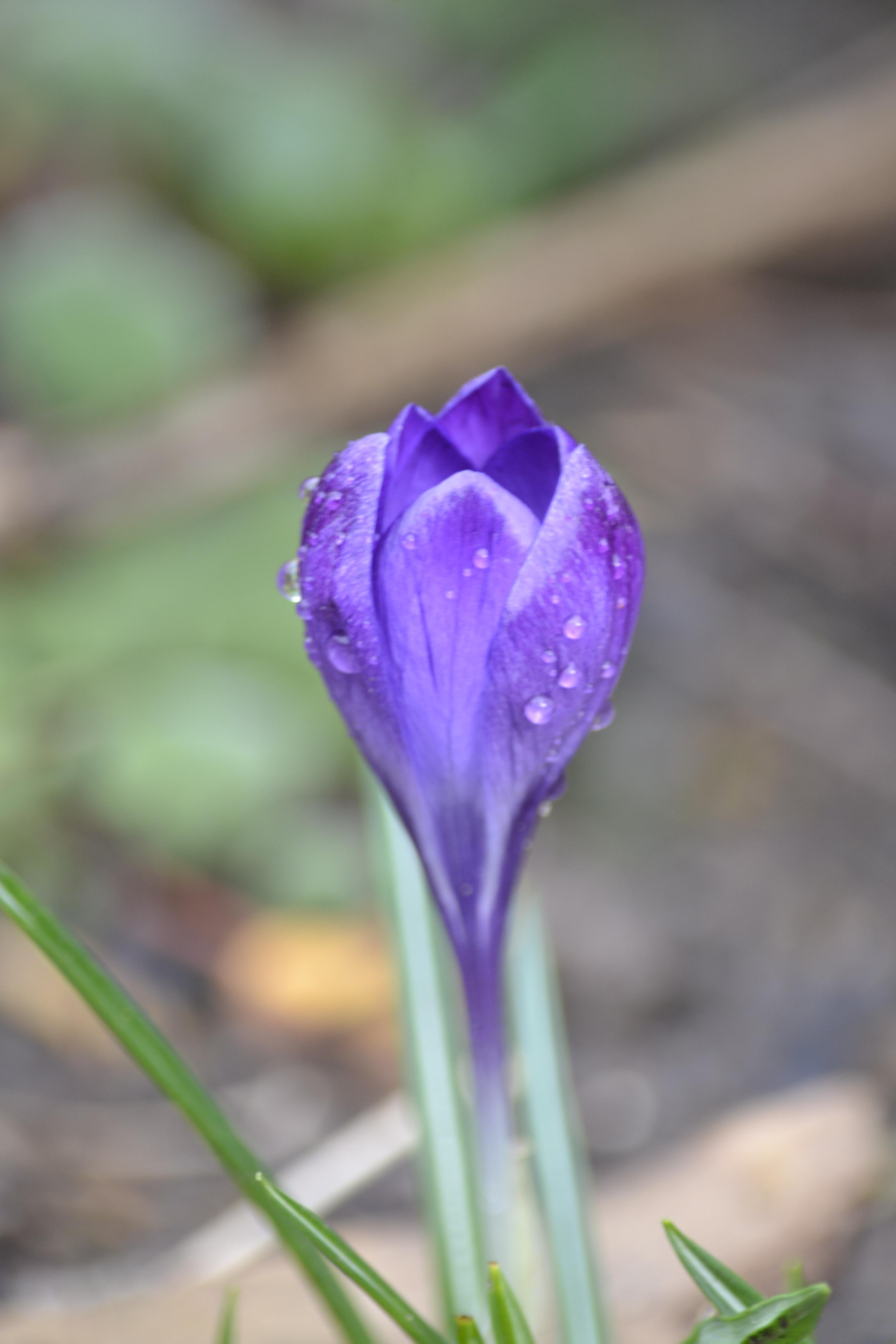 I dug the Korean Dwarf Lilac out last month as it was getting too large for space. It was blocking the view down the garden from the extension room. I’ve moved a pink Hydrangea macrophylla from the end of the garden into the gap. The larger hydrangea next to it will be getting a cut soon. The Choisya ternata is also due to have a haircut. Then the two hydrangeas should grow into each other giving a low hedge of pink flowers that we can still see over from the house. Not quite the Hydrangea walk of Exbury but it should work better than the dwarf lilac. 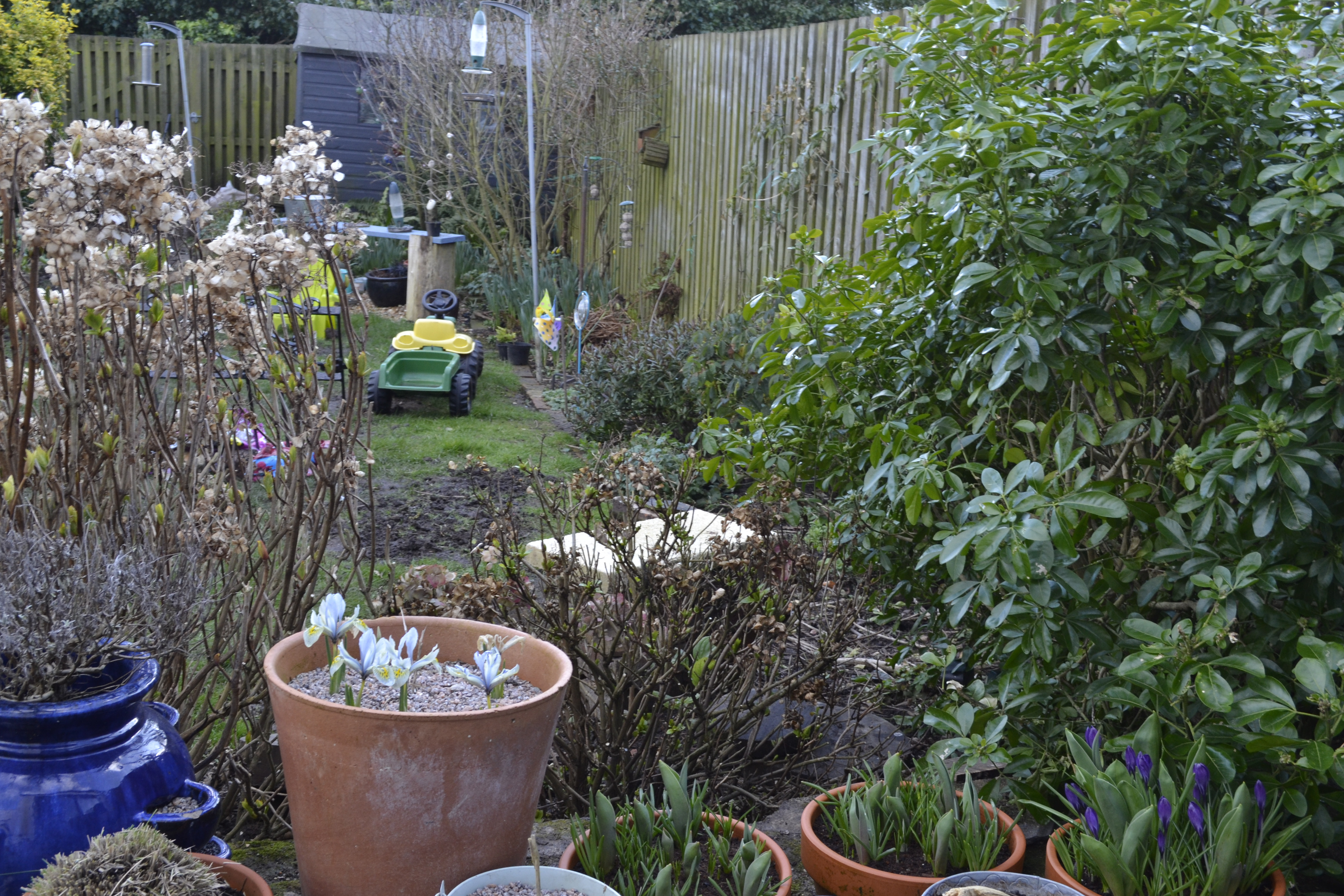 Then I have moved Hydrangea Libelle from its pot into the border where I’d dug the hydrangea above out of. I had hoped to keep it as a small plant in a pot for the patio but its growth in one year makes me think that’s not possible. I’ve also shaved a little bit off the lawn to give the plants here a bit more space. To the left behind this is one of the Hydrangea paniculata ‘limelights’ I planted last year. These two Hydrangeas have slightly different flowers and foliage but I think will combine well. To the right is the Ilex altaclernsis ‘golden king’. This holly will grow up providing a medium evergreen tree. This should give the hydrangeas the shade they like and provide a good backdrop to these. The surrounding area has a few ferns and hostas that are still establishing. The area needs a bit of a tidy but it should look good by summer. Having cut off a little corner of the border there is a little bit of space for new additions to the border. I do have some hardy geraniums or bearded irises that might go here. 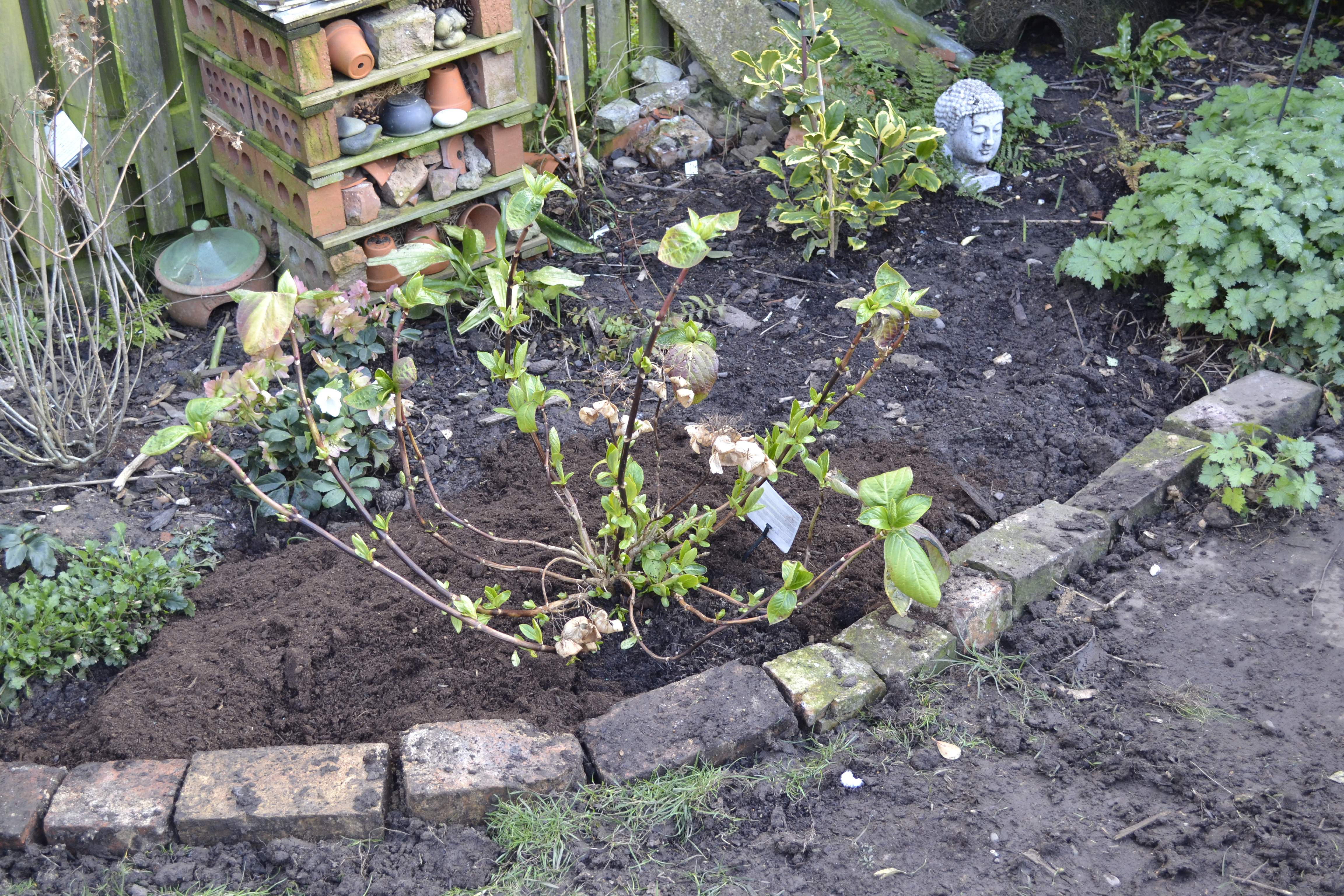 Along with shaving a little bit of the lawn I’ve raised the height of the bricks I’d used to edge the lawn. The border soil kept covering them so this should help. I also rounded this corner as the grass never grows well here as it’s too shaded. No sense trying to fight it putting grass seed down. The border looks a bit neater for having its edge back. The bricks should get a clean off with all the rain we are now having to wash off the soil left on top while I was raising them. 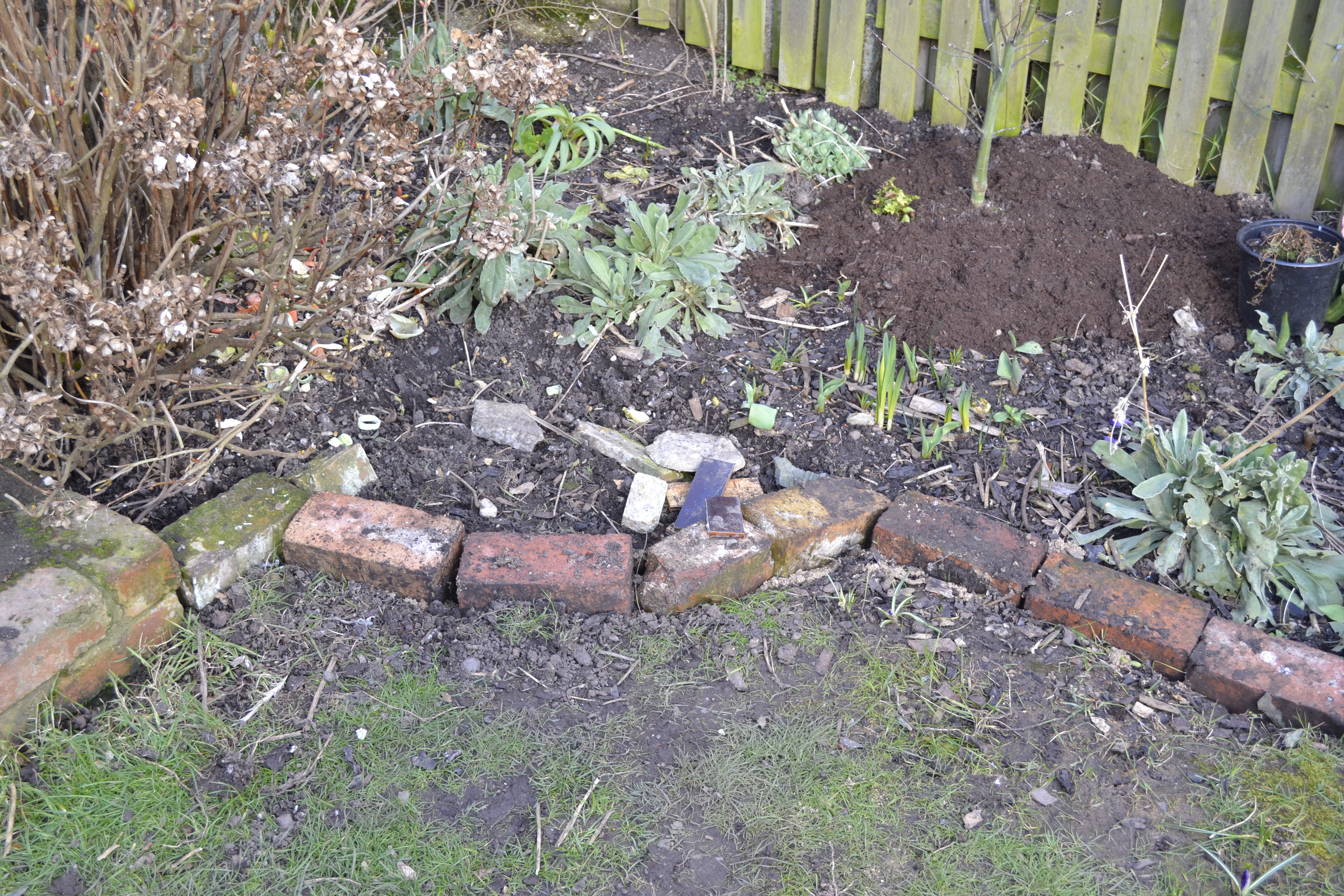 I finally got around to pruning the roses. I’ve trained in the climbing roses. The aim is to train several stems horizontally to encourage flower production.  the two climbing roses are gradually developing a decent framework. It’s not quite textbook training but’s not a bad effort. Both have clematis growing through that are also getting to reasonable points so I should get a greener fence with bursts of flowers through the year. 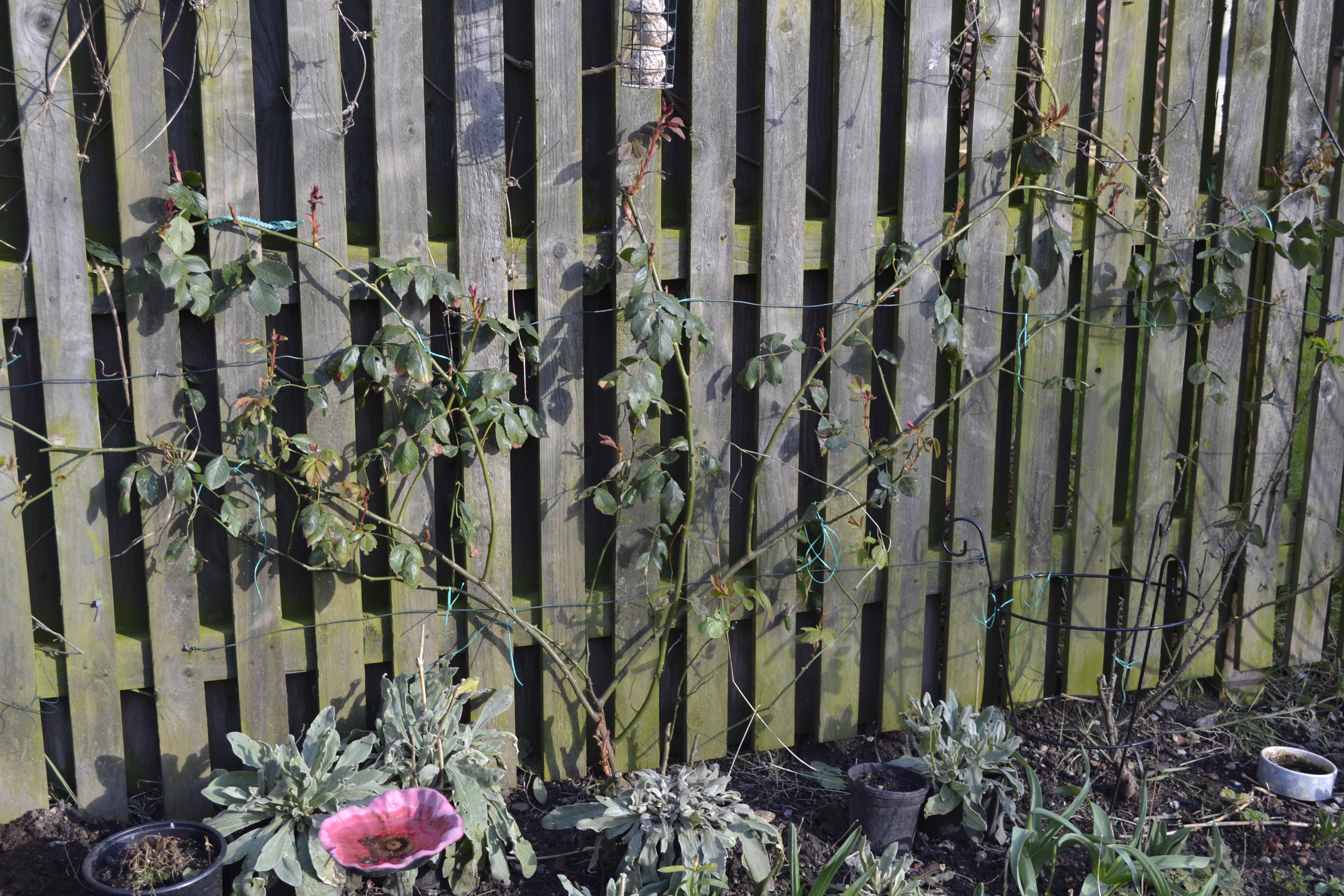 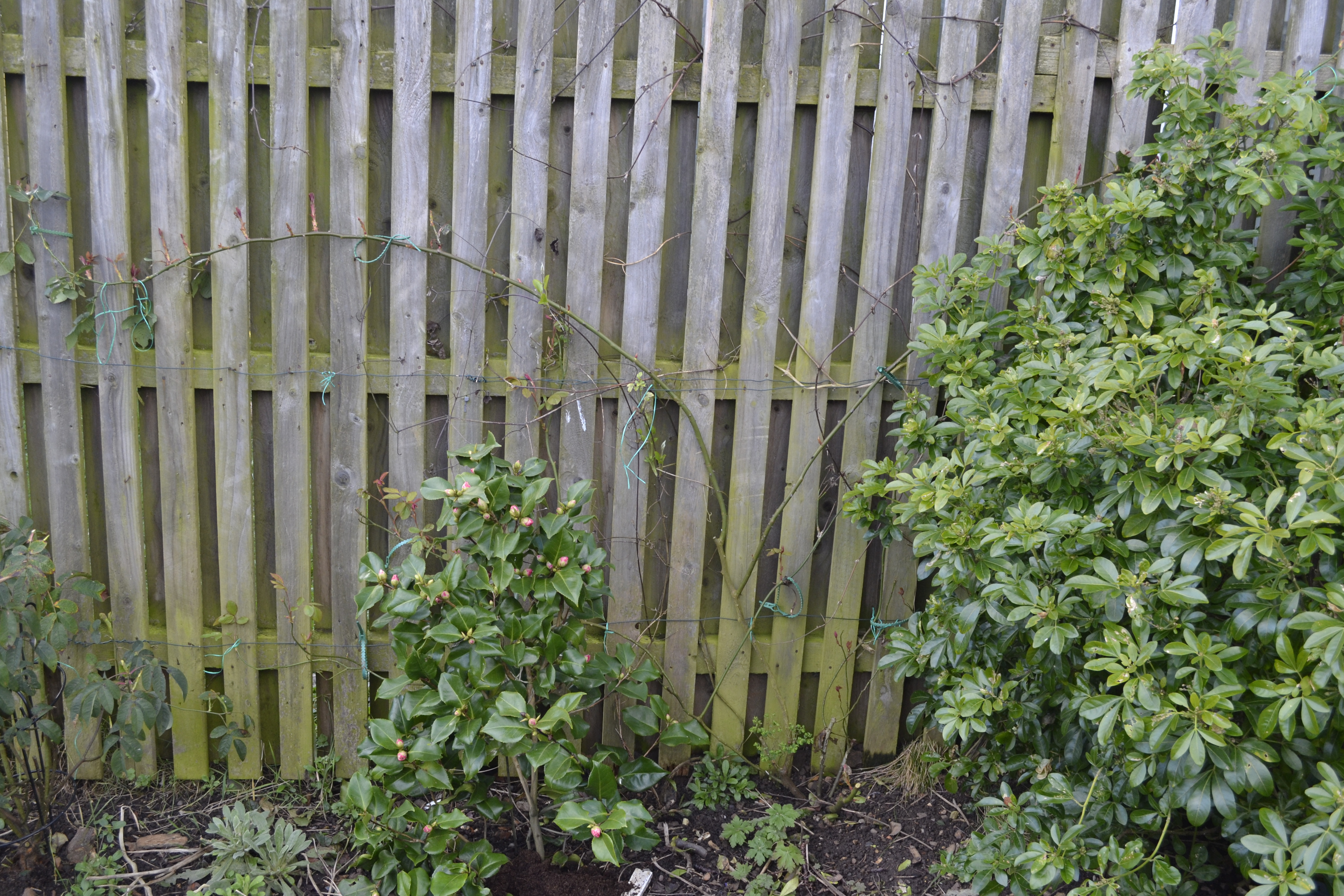 I’ve had this Acer sat in a corner for a while. I’d bought it a while back as a discount purchase. It should have £70 but was down to £15. A decent price for a tree about a metre and a half in height. Acers don’t really suit my sea winds but I like them enough to persist. This is in a reasonably sheltered spot with climbers working up the fence. That will give it a bit more protection. I’ve given it a mulch with ericaceous soil to help it settle in. This particular Acer should give bright green foliage in spring then fiery orange and red foliage in autumn. 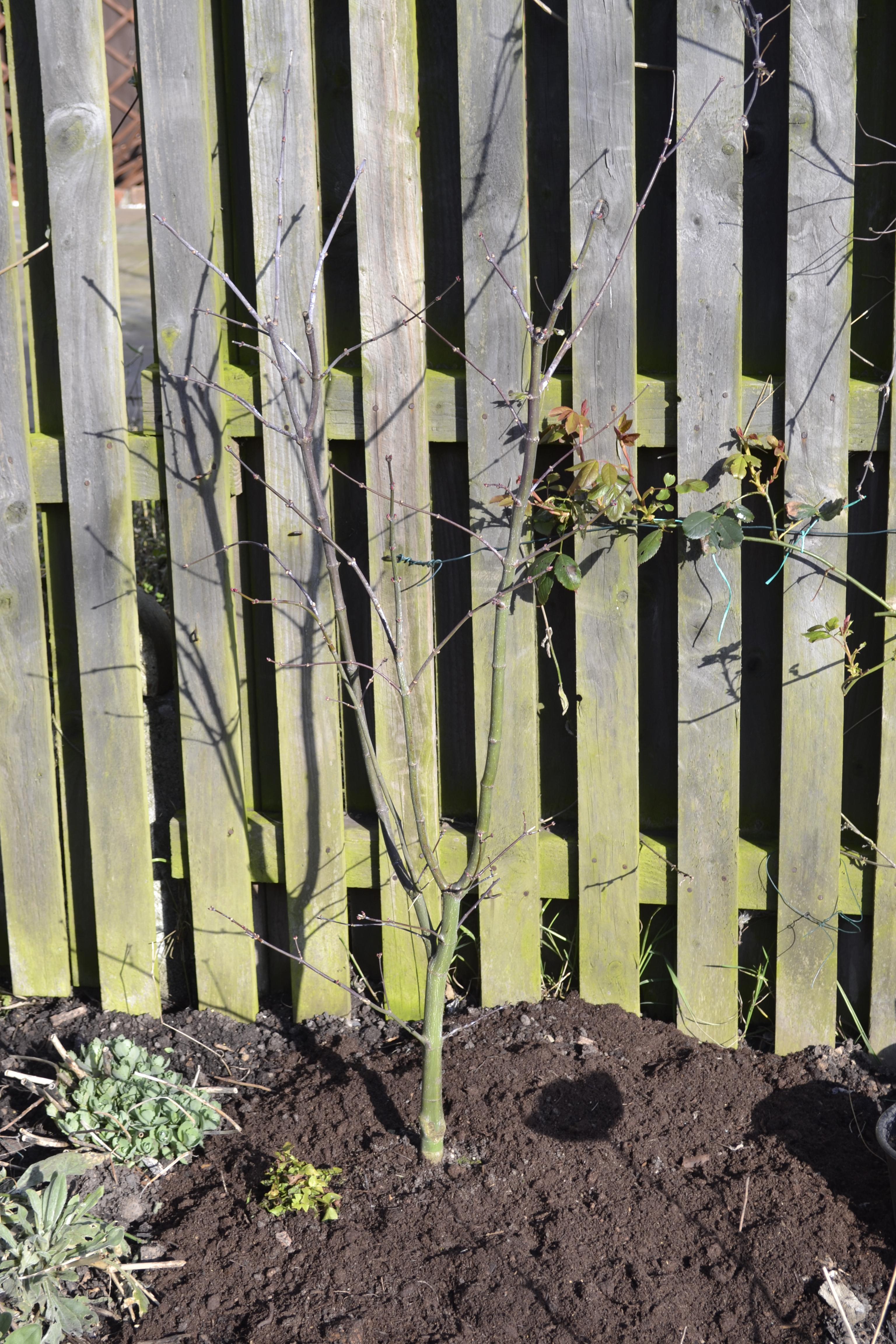 I found this pot decoration in the charity shop clutter shelf. I thought it would make a nice garden decoration. I’ve used one of my rusty bird feeder poles I was considering getting rid of to combine them to make a little decoration for the pot display. 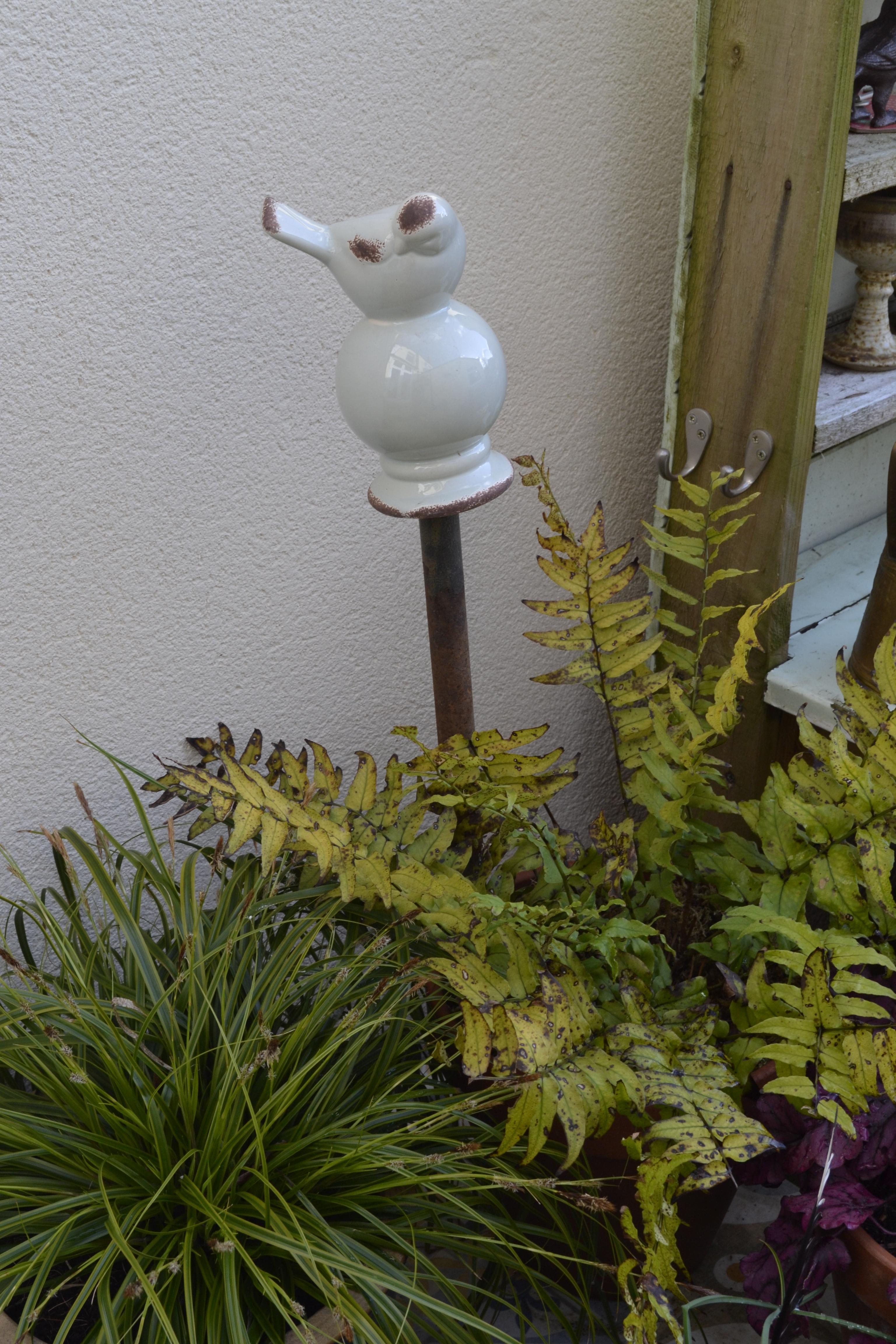 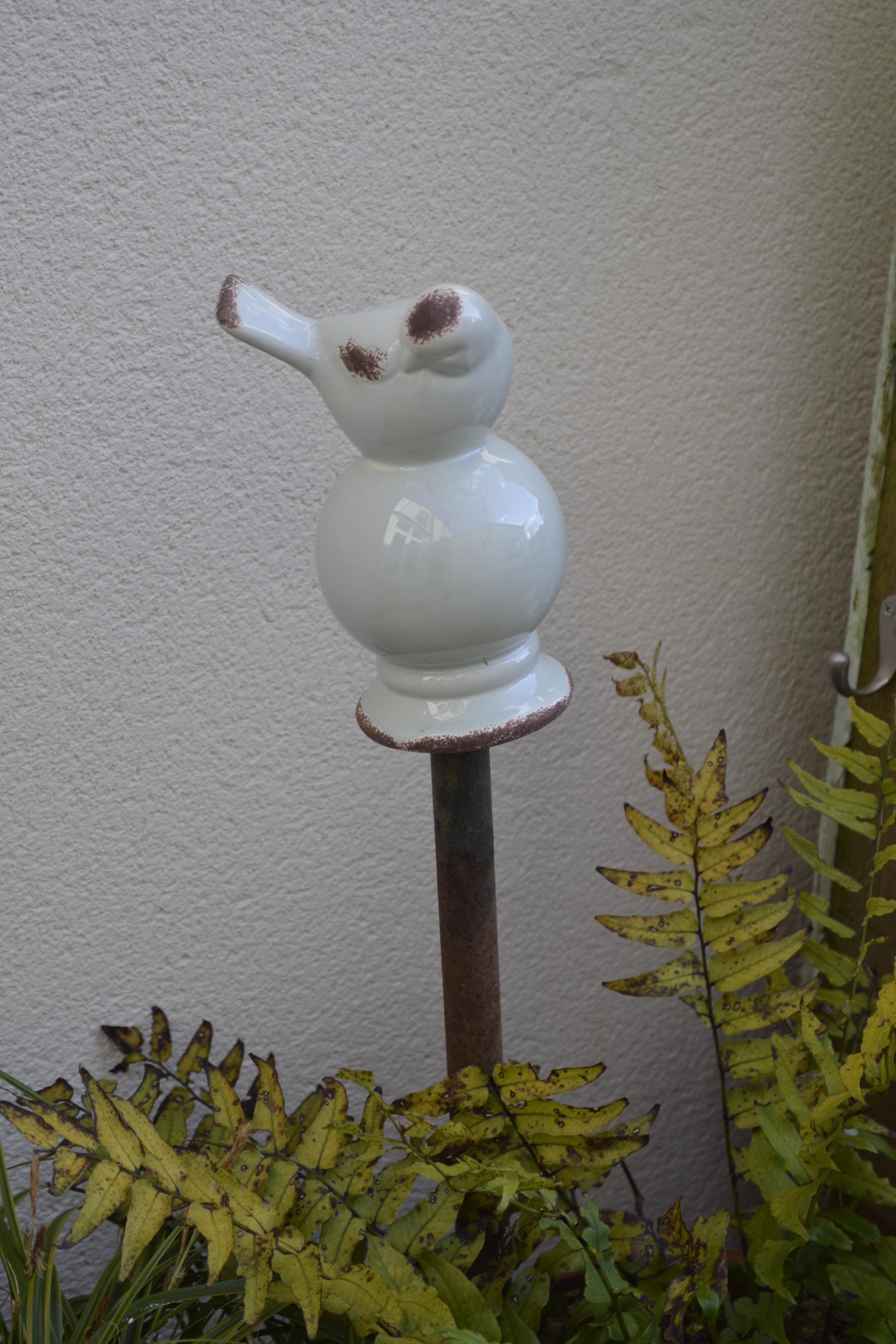 It’s been a productive week of getting through jobs despite the weather. I start in my new garden centre job next week. I’m still under strict instructions to not buy tons of plants. We’ll see if I manage it next week. I do need some more compost but this whether I was working at a garden centre or not. Wish me luck!