Today’s six on Saturday is a post of two halves. The first half coming from a family friend’s garden, the second half is from my own garden. Last weekend we went to visit one of Amy’s friends whose garden we had seen on open gardens last year (garden 4). I was interested to see it in winter as it has a lot of foliage I’d assumed was evergreen. But it was all still looking great. The mass carpets of cyclamen foliage covering lots of ground, alongside hellebores coming into flower looked great.

Alice was very taken with the snowdrops, though she is referring to them interchangeably as snowdrops and snowbells. I don’t think I have any coming up in my own garden anymore or they are lost in the foliage. I may have to see about adding a few in the front garden. Then Alice can enjoy snowbell hunting in our garden. 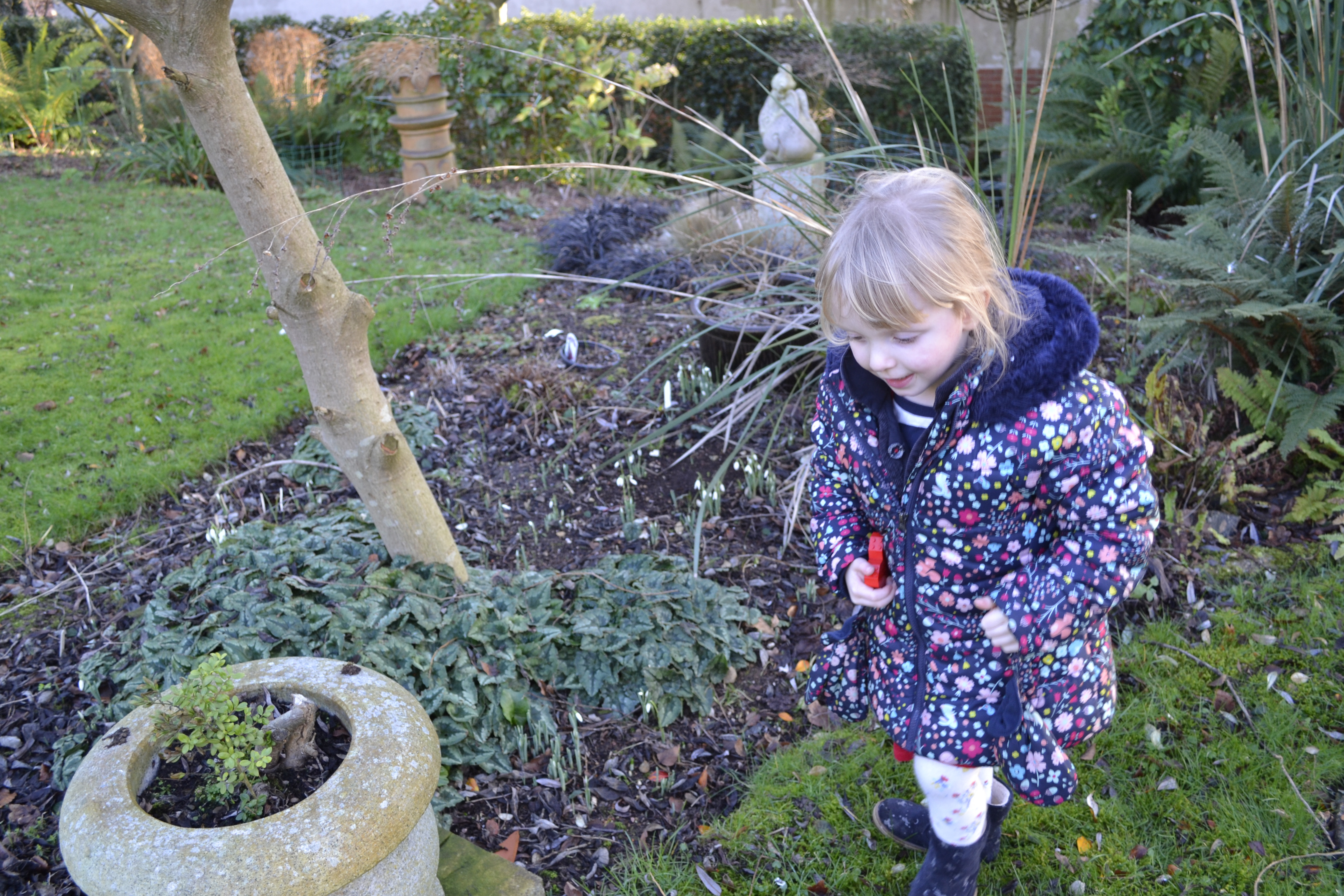 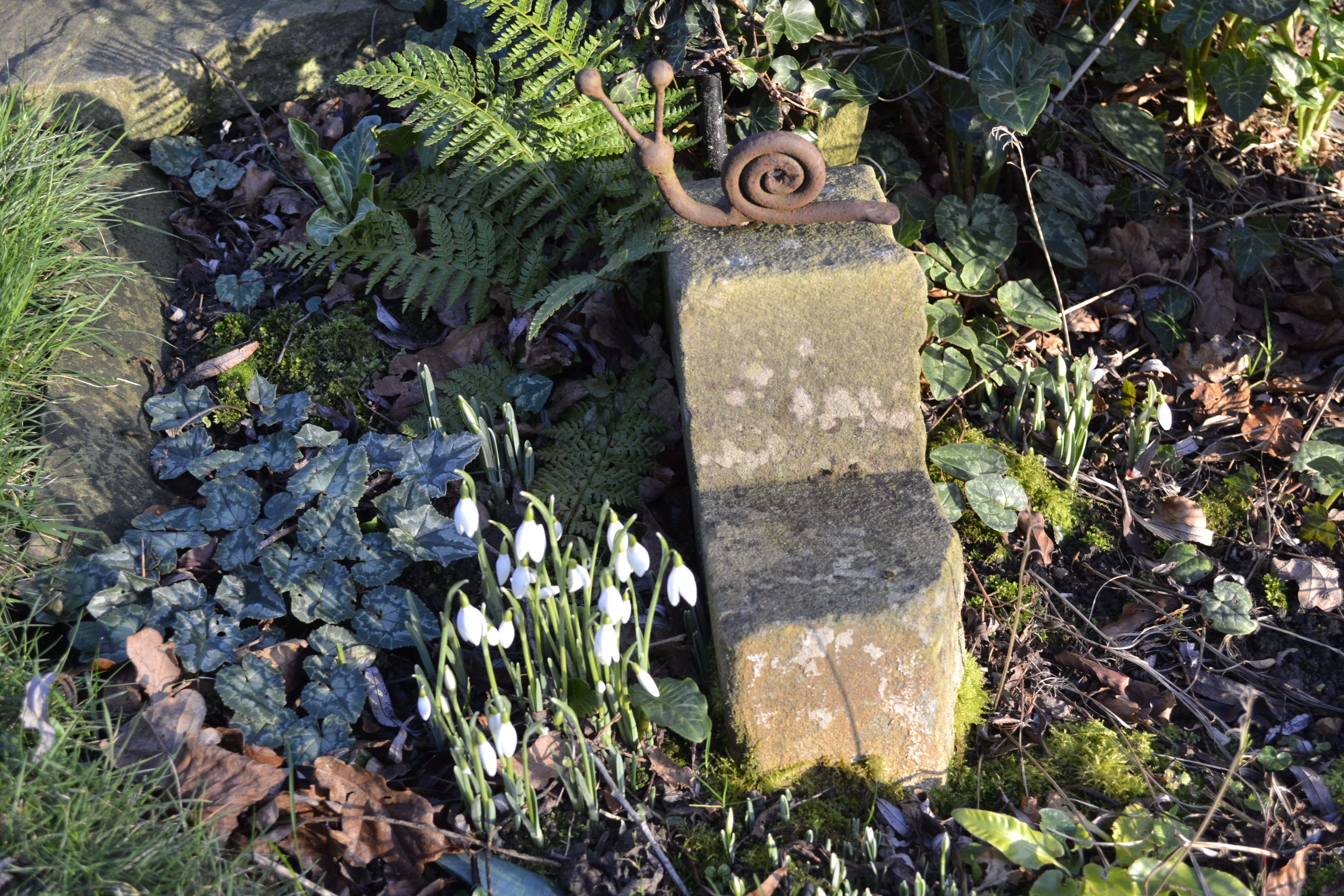 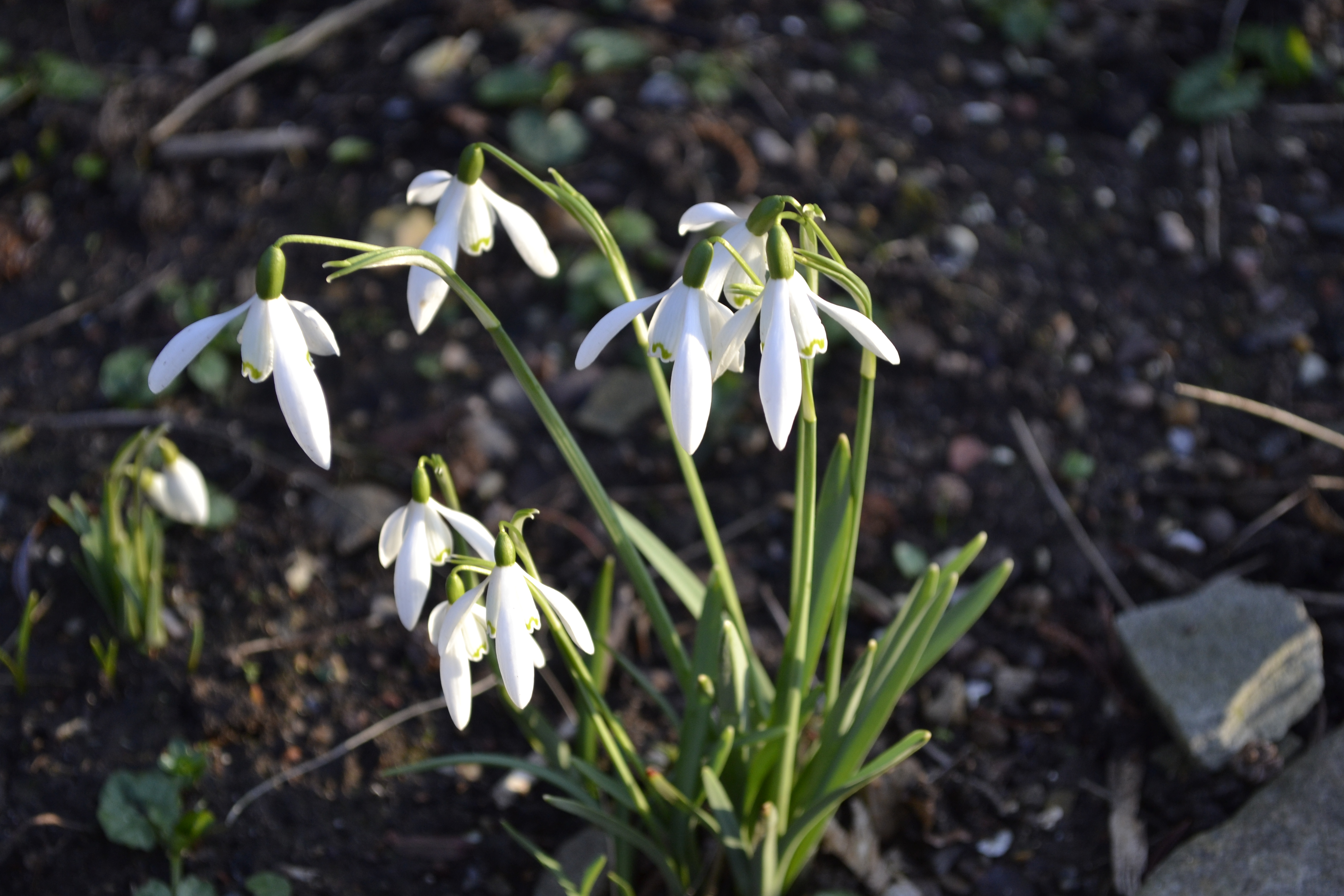 I’d seen this area of their garden in summer when the pots were filled with hostas and ferns. Even in winter without the hostas, the ferns still look great. 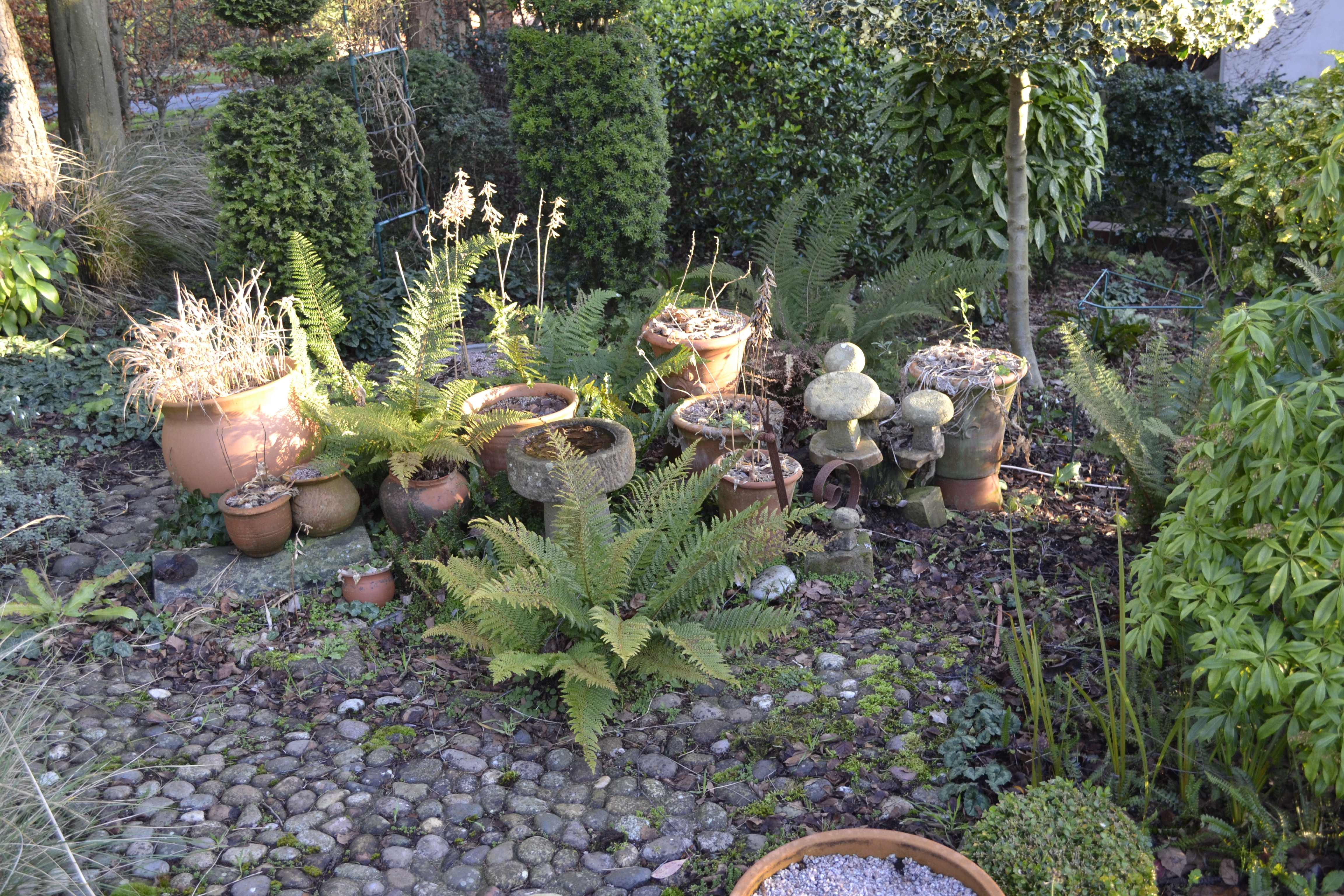 The semp pots and rock towers still looking good. All the found objects adding to the look nicely. 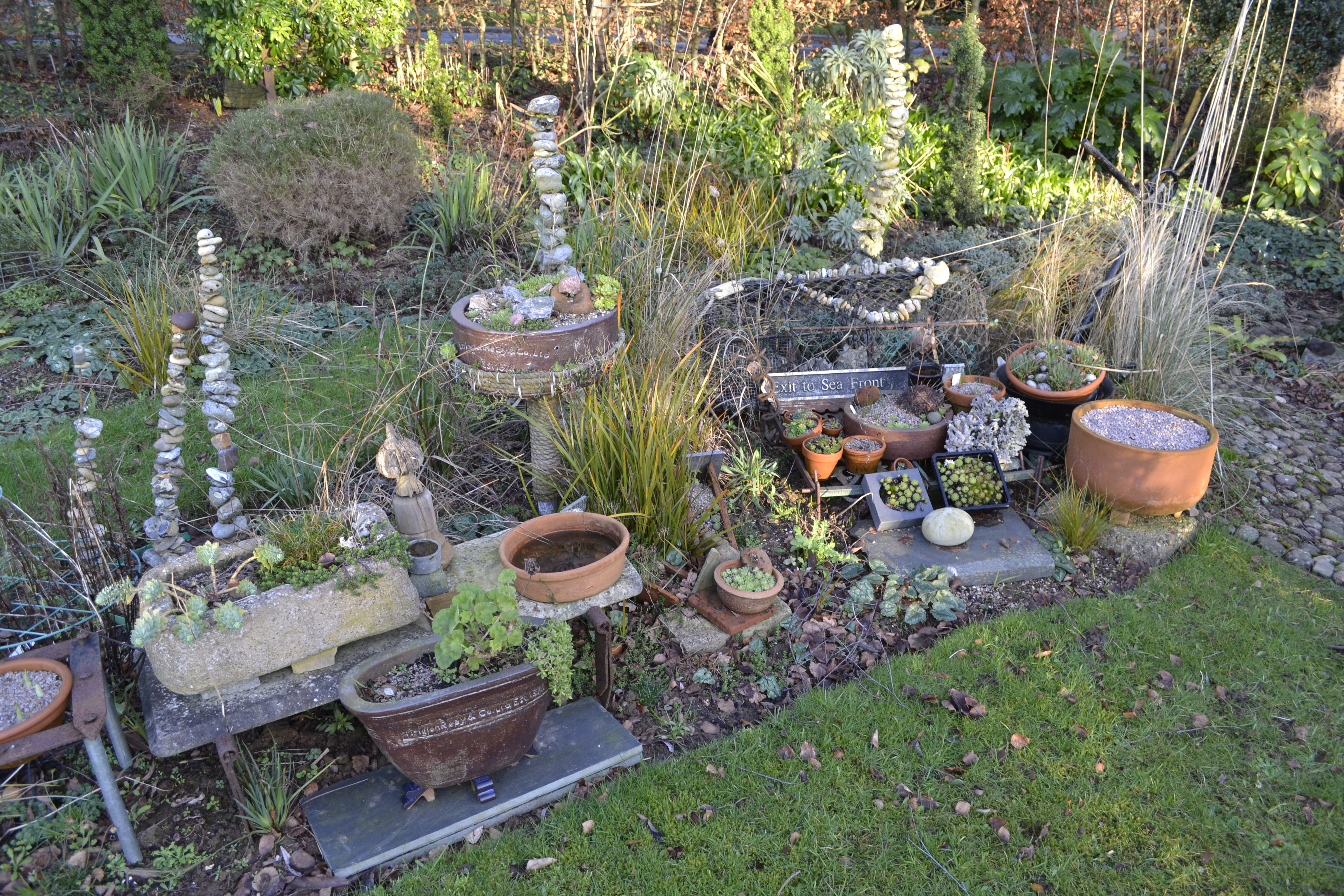 Returning to my own garden I made the decision to give the Korean dwarf lilac a rather severe haircut. I’ve cut it each year but it has gradually been creeping up in size. The surrounding shrubs will be given a trim in spring. Though having cut the dwarf lilac and looking at the gap I think it may be better removing this completely and letting the hydrangea and choisya claim the space rather than having three shrubs fighting for space. 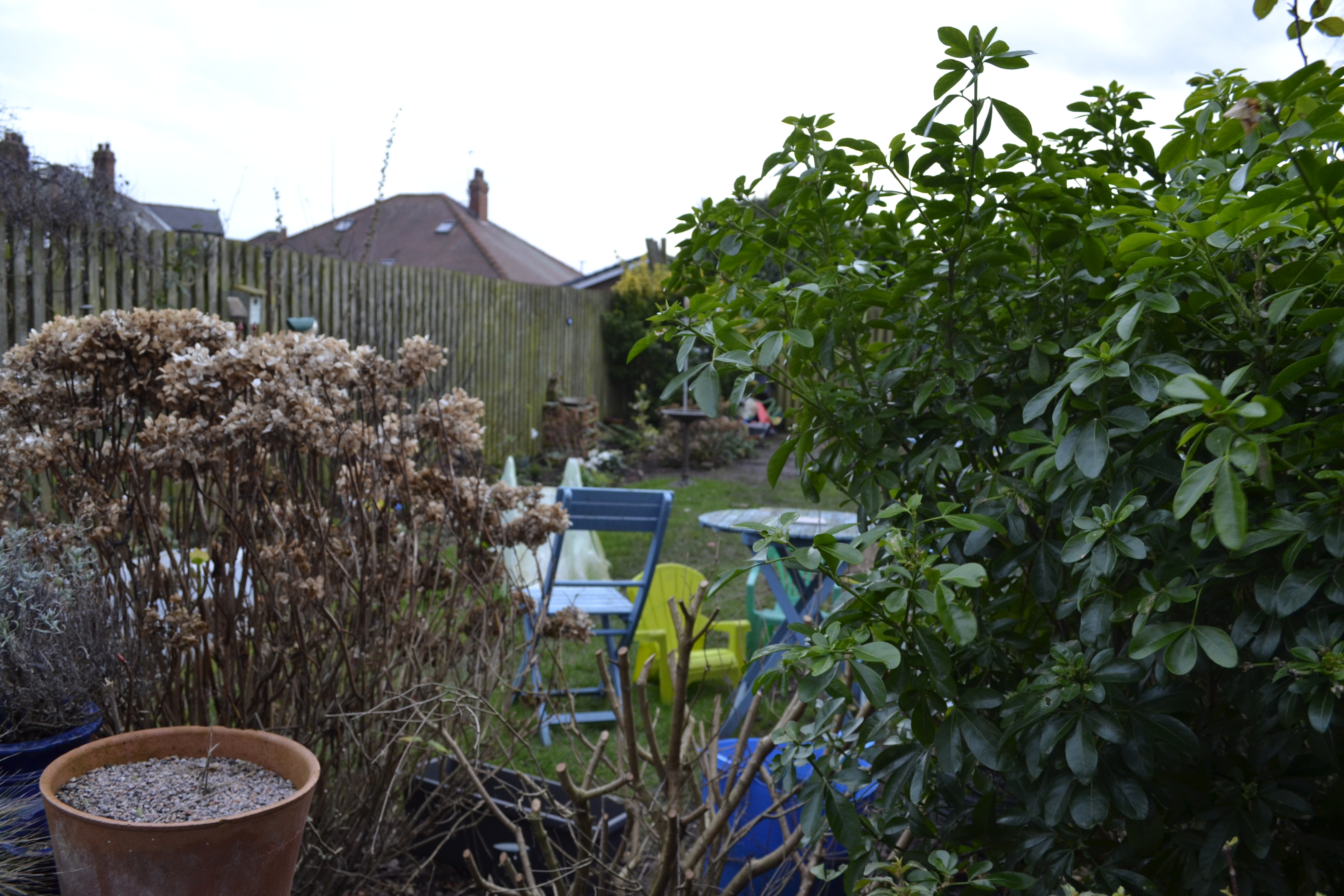 I’ve talked previously about my plans to use driftwood in the garden. I’ve managed to claim a few more pieces to start laying out in front of the pots just next to the Korean dwarf lilac. I’m loving the very knotted piece full of holes. A great find. 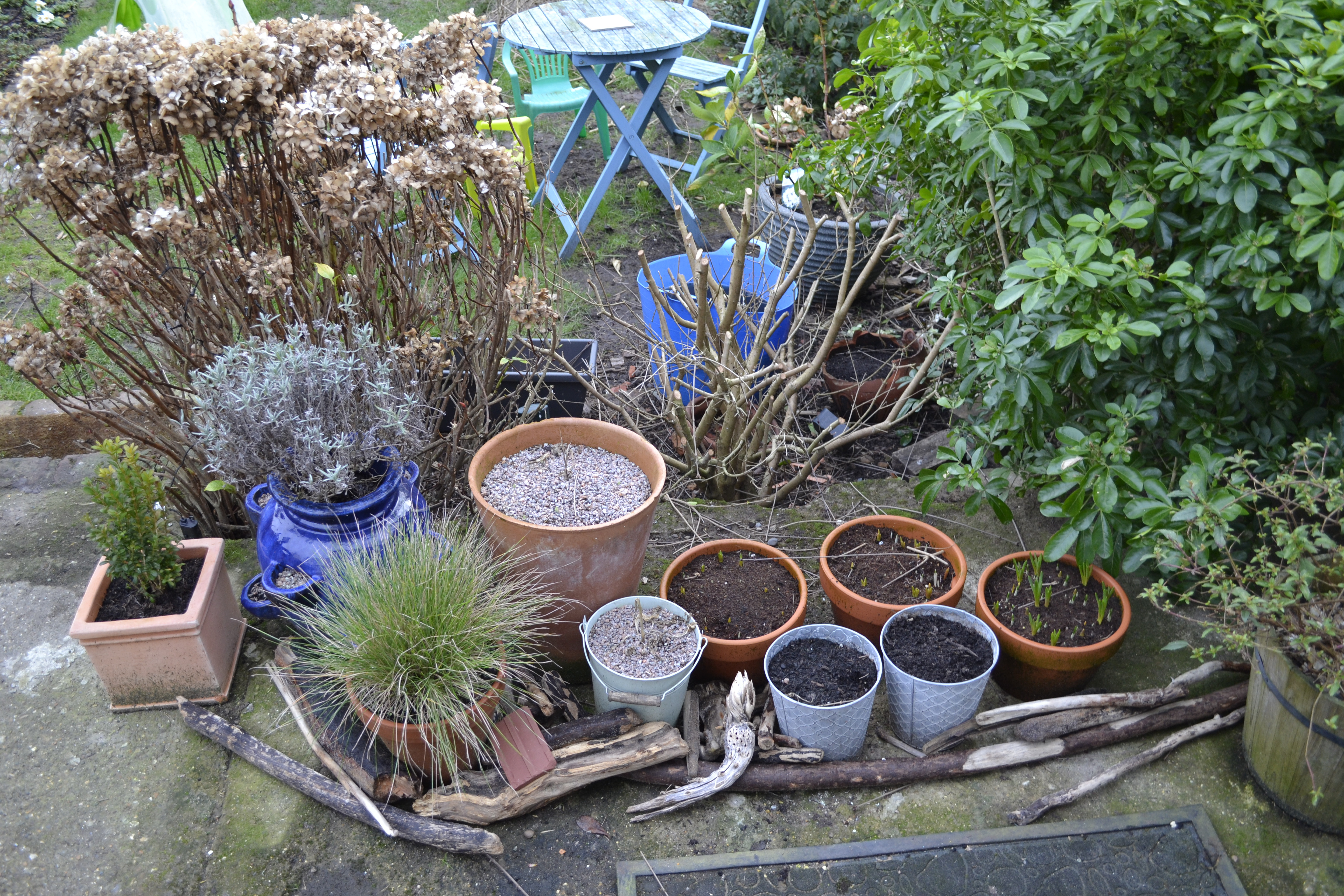 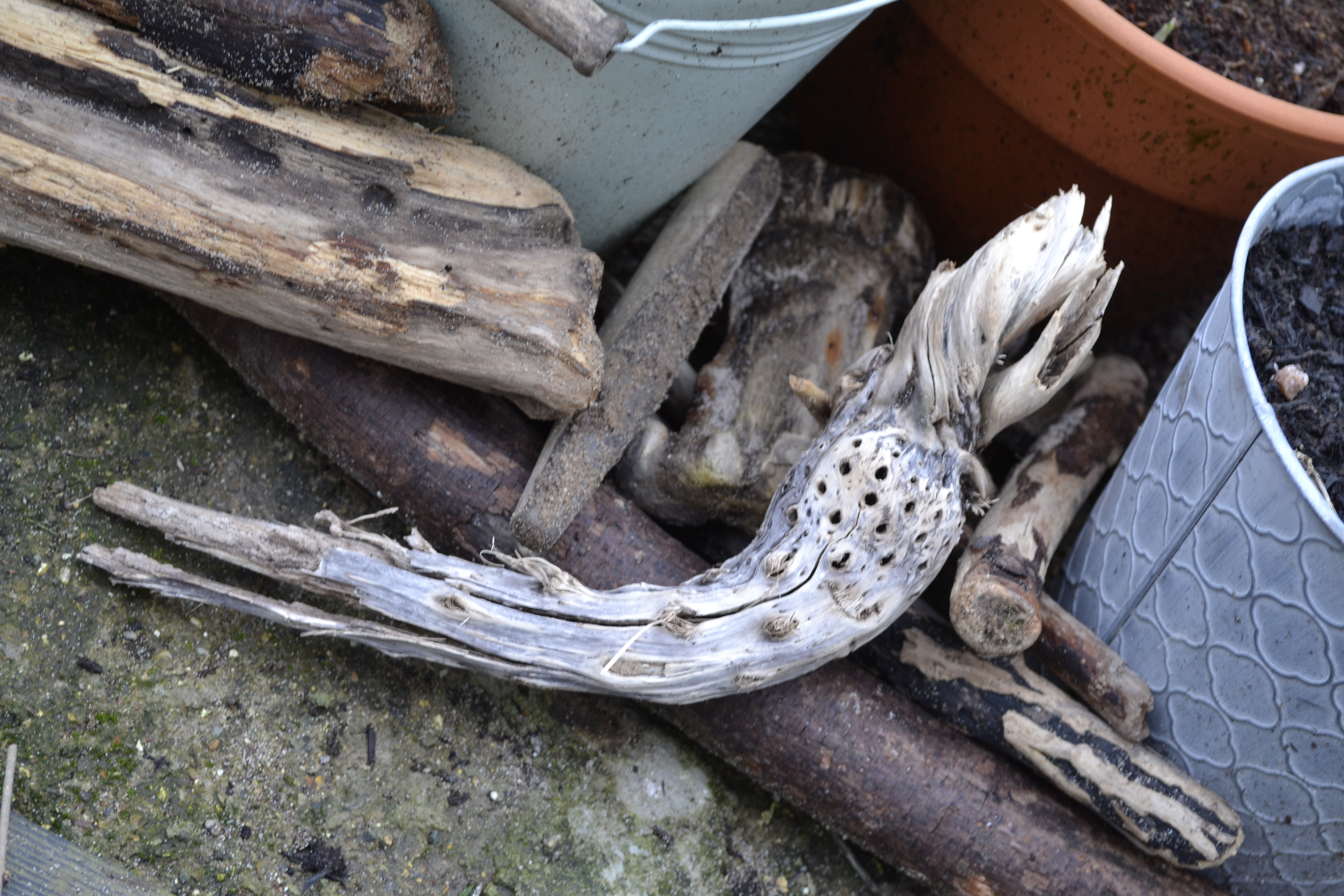 Then I’ve managed to get another big piece. I need to wash some of the sand and salt then I’ll probably look at putting it into the borders as I’ve done with the other large piece I found. 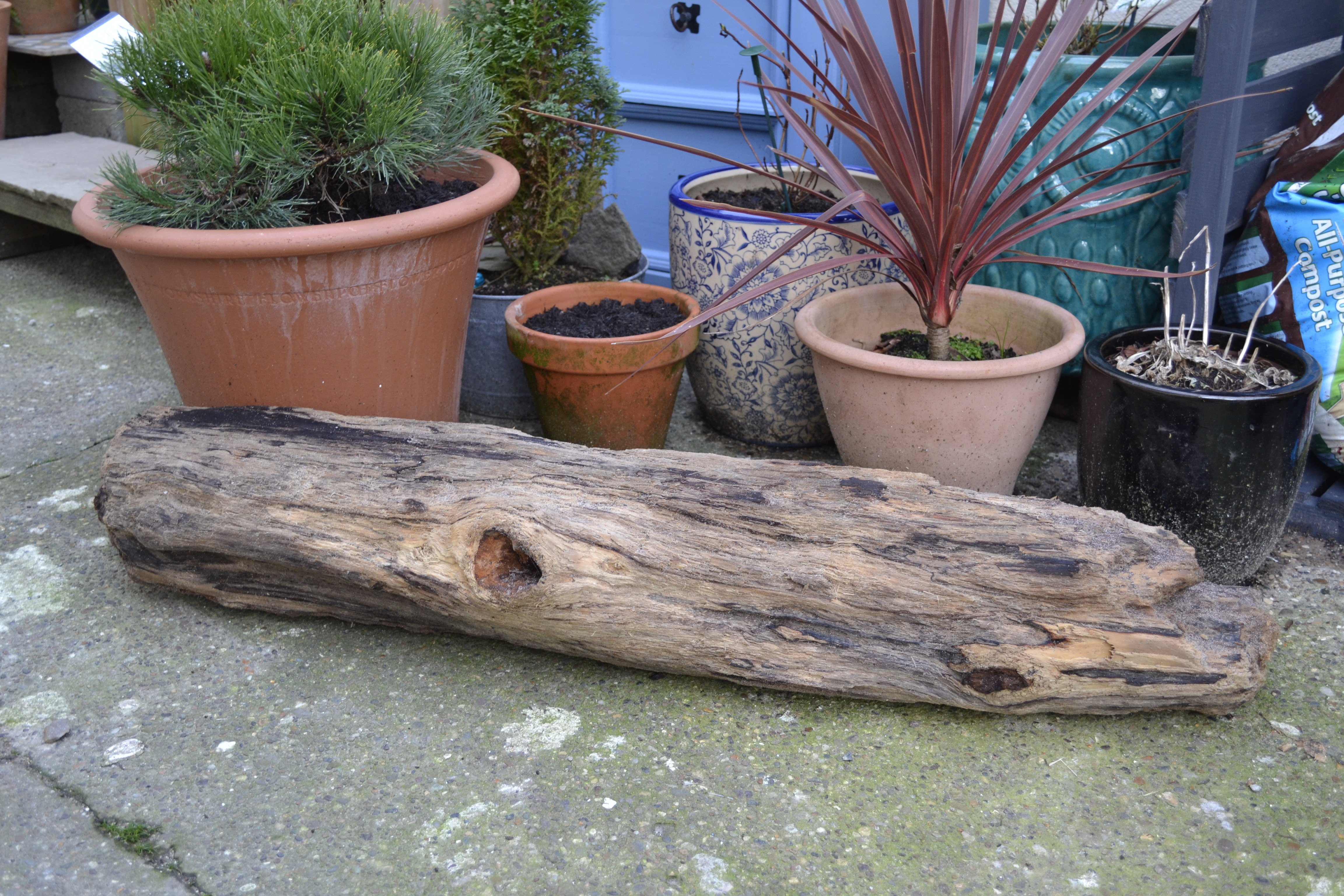 The iris are shooting up quickly with the mild weather. I think I may have an early show for many of these. I expanded my selection with a few different varieties Katherine Hodgkins, Katherine Hodgkin’s gold and harmony. Having seen some stunning purple ones in the last few weeks I’d like to add something like Pauline next year. They have stunning deep purple flowers. 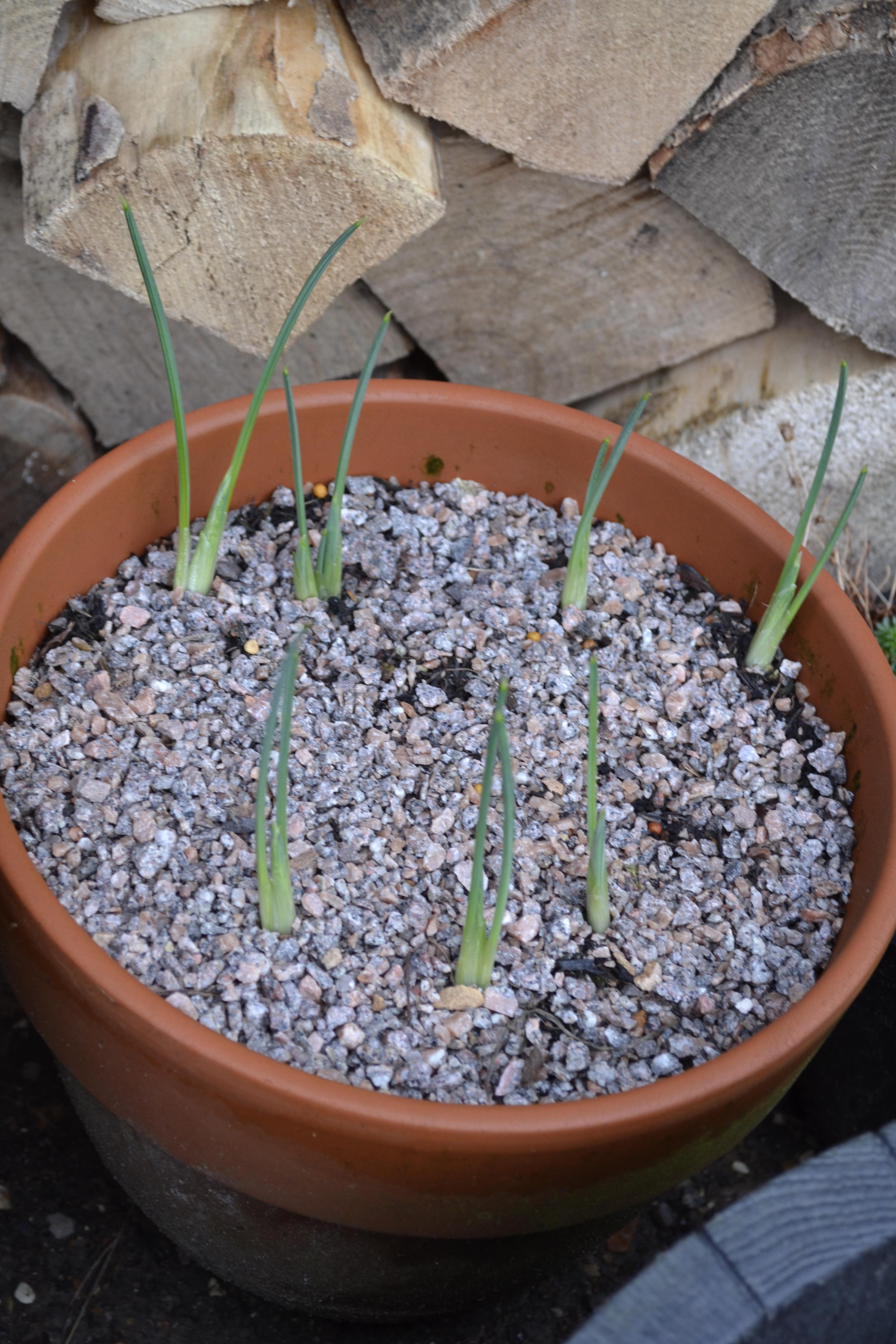 A number of the hydrangeas have foolishly put on growth beyond the old mopheads with the mild weather. I think they may regret this if the temperature drops as predicted. Rather strange looking things when you look closely. 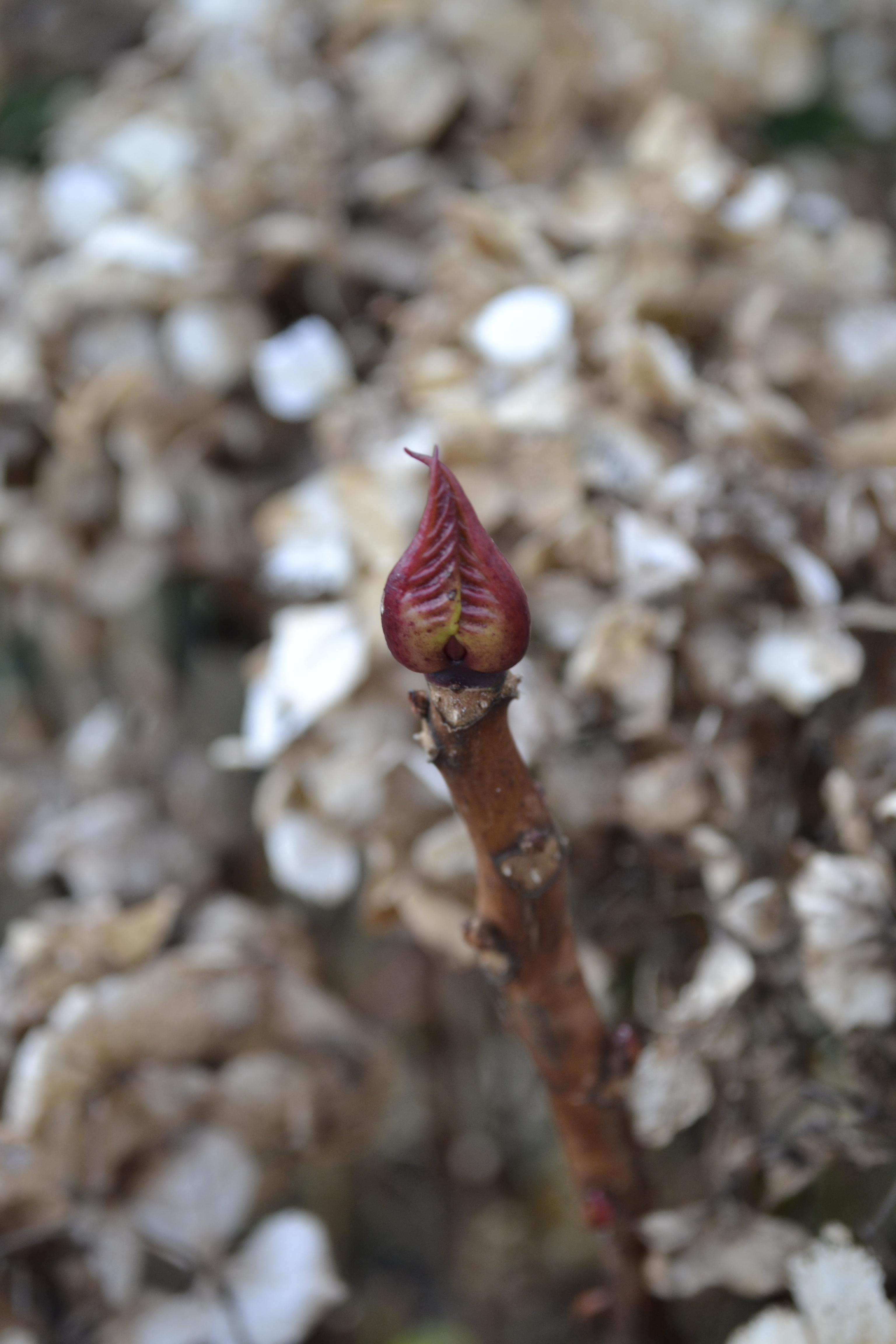 I’m planning on carrying out my Big Garden Birdwatch so I’m looking to disturb the garden as little as possible this morning until that is done. Then the forecast is dry for today but rain for tomorrow so I’m going to be looking to tidy up the pruning work today. I’m cutting it down as much as I can and putting it down as a mulch under the hydrangeas. It will be slow to break down but it will provide for beetles and woodlice. 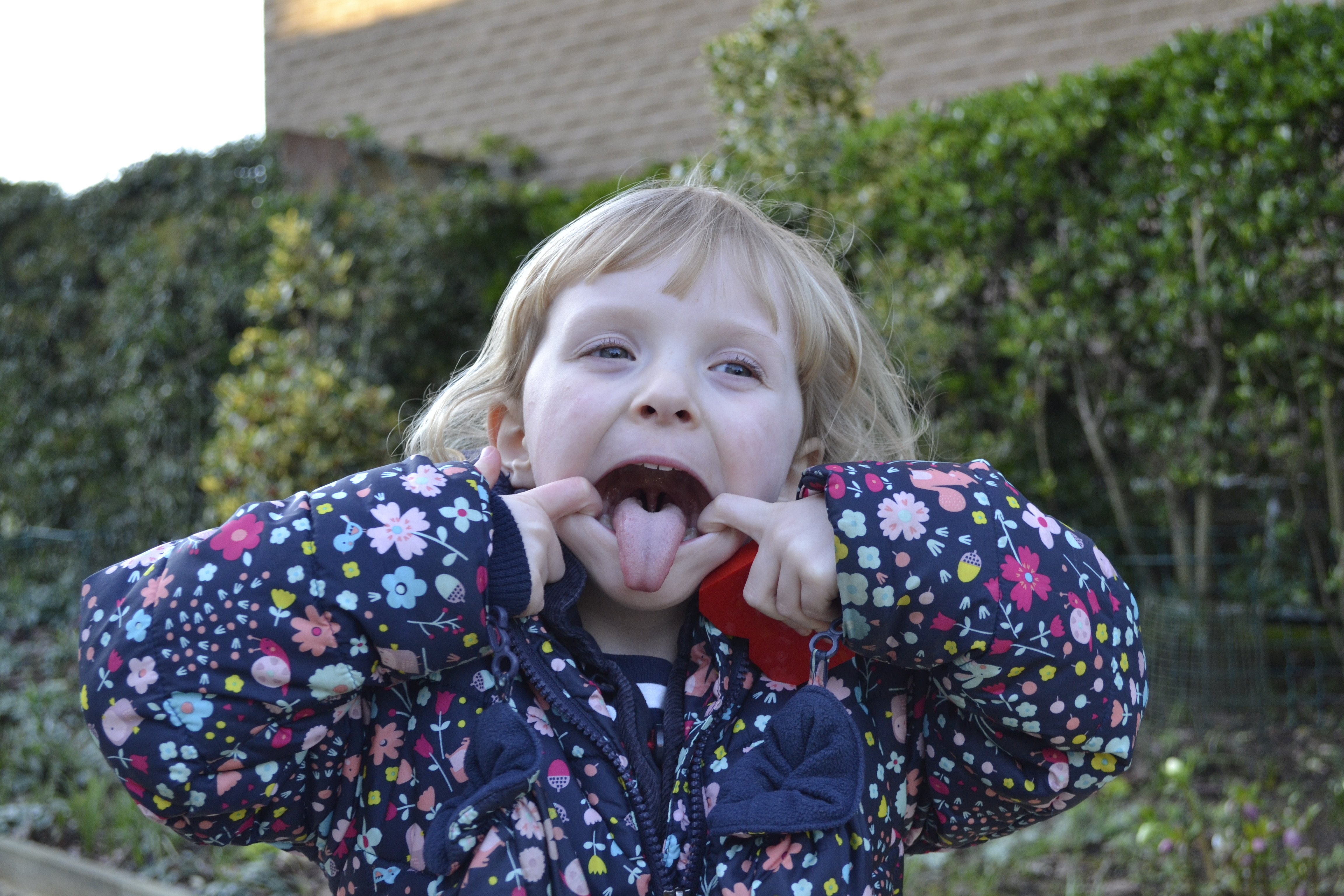