This week saw me return to work. One training day and then back working with the children. It’s always a shock to the system going back and I’ve found myself tired much of the week and adjusting to not having as much time outside or in natural light. But the weekend is here so some time to see outside. But I managed a few last gardening jobs last Sunday before I started again and managed to grab the odd minute of fading light in the evenings to get out in the garden.

I had posted about my disappointing hellebores a few months back. My newer ones are putting on a more satisfactory show. Good to see some flowers that haven’t been destroyed by slugs. 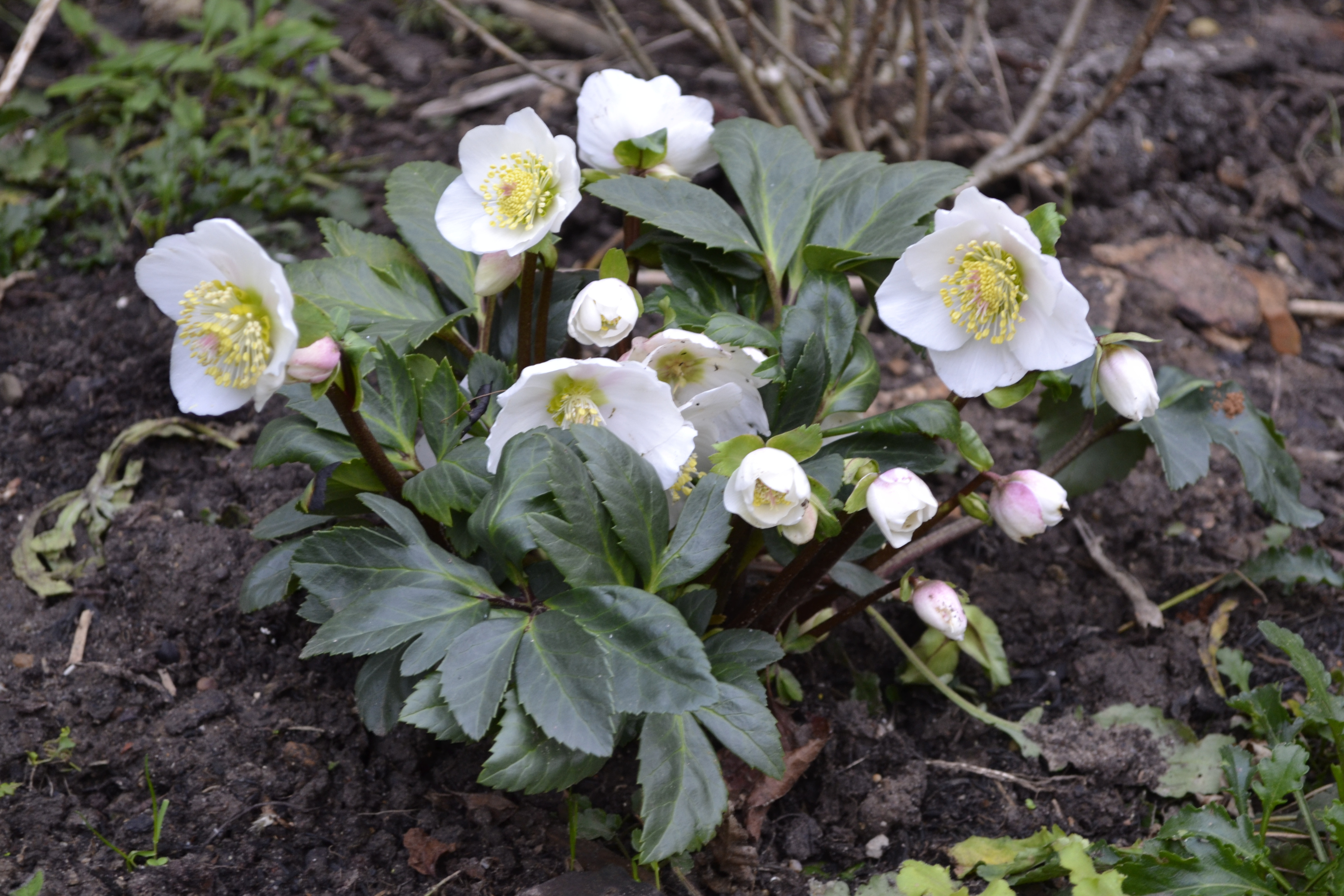 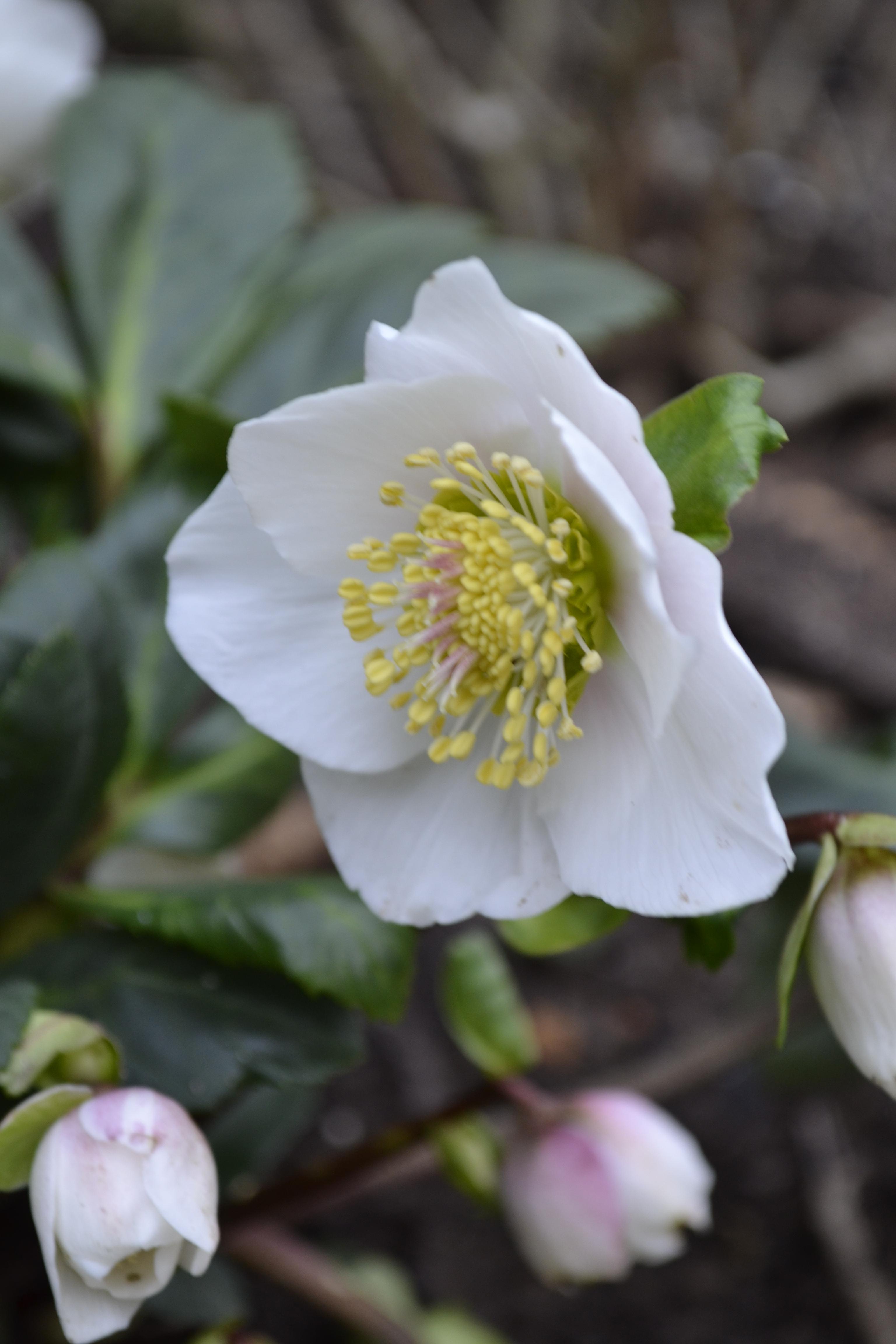 Alice had a real Christmas tree for her bedroom. It survived the Christmas period largely intact without dropping all its spines. So it has now been moved outside. I’ll now look at potting it up with Alice maybe as another dinosaur garden. It’ll give us a display for a while until it gets too big. 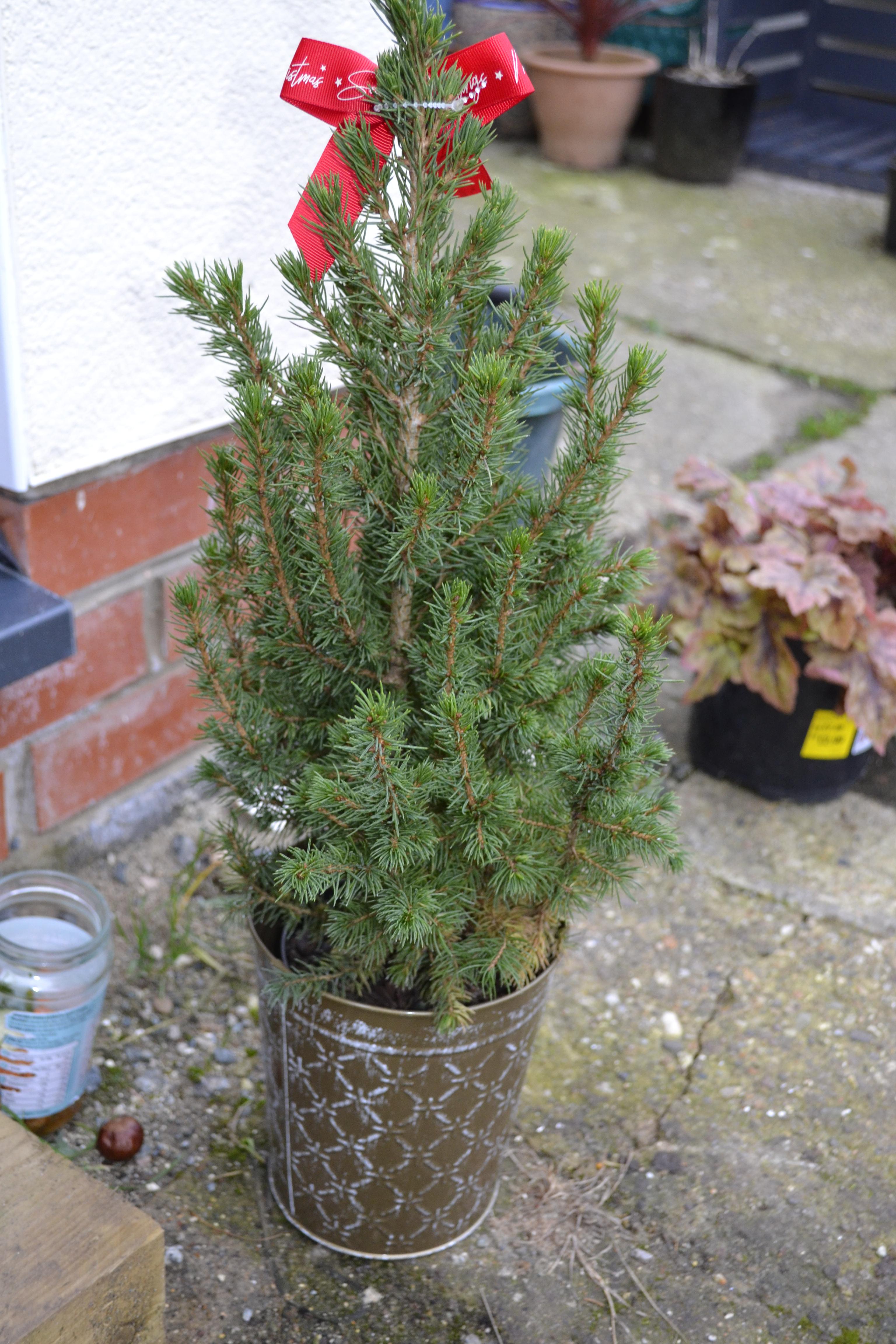 Following on from last week’s fern kokedama I dug out an ivy seedling from the wilderness behind the house and wrapped it. I still didn’t quite get the soil mix right so that it holds together but manage t wrap it all in tight. Still a bit of an ugly dumpy look, much like the last one, but I quite like it. 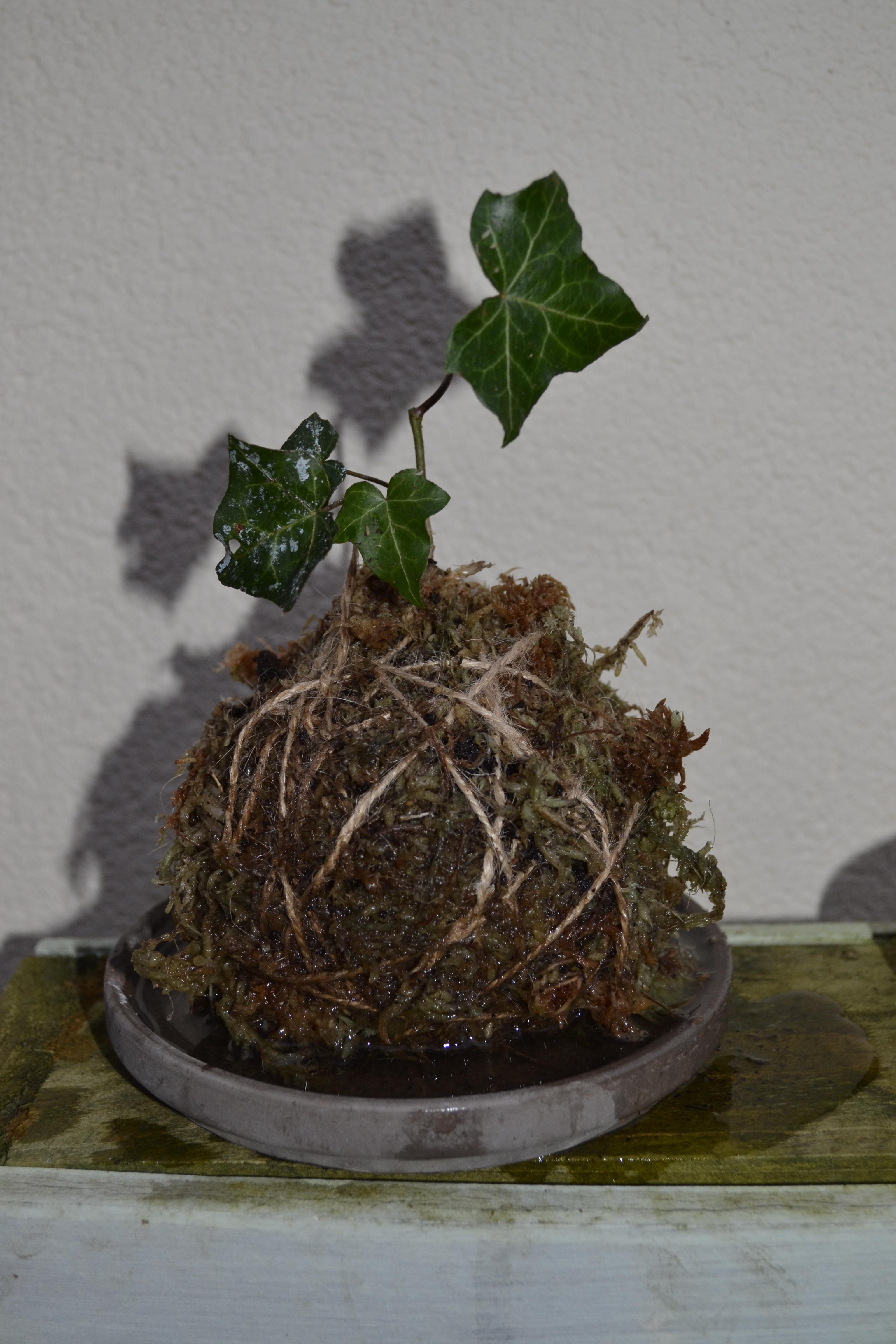 Following on from finding the big driftwood lump last week I went back with Alice to look for some smaller driftwood. I thought I could use it as a line marker for my pot displays on the patio to add another layer of structure. Then if I can add some more driftwood within the borders tie the patio and lower garden together. The larger branches I’ve used to make a path edge to the pots and then I’m piling beach finds of smaller wood behind. If I gradually build it up I think it will look quite nice. I’m keen to try and add more found objects from my locality to place my garden within the bigger picture. 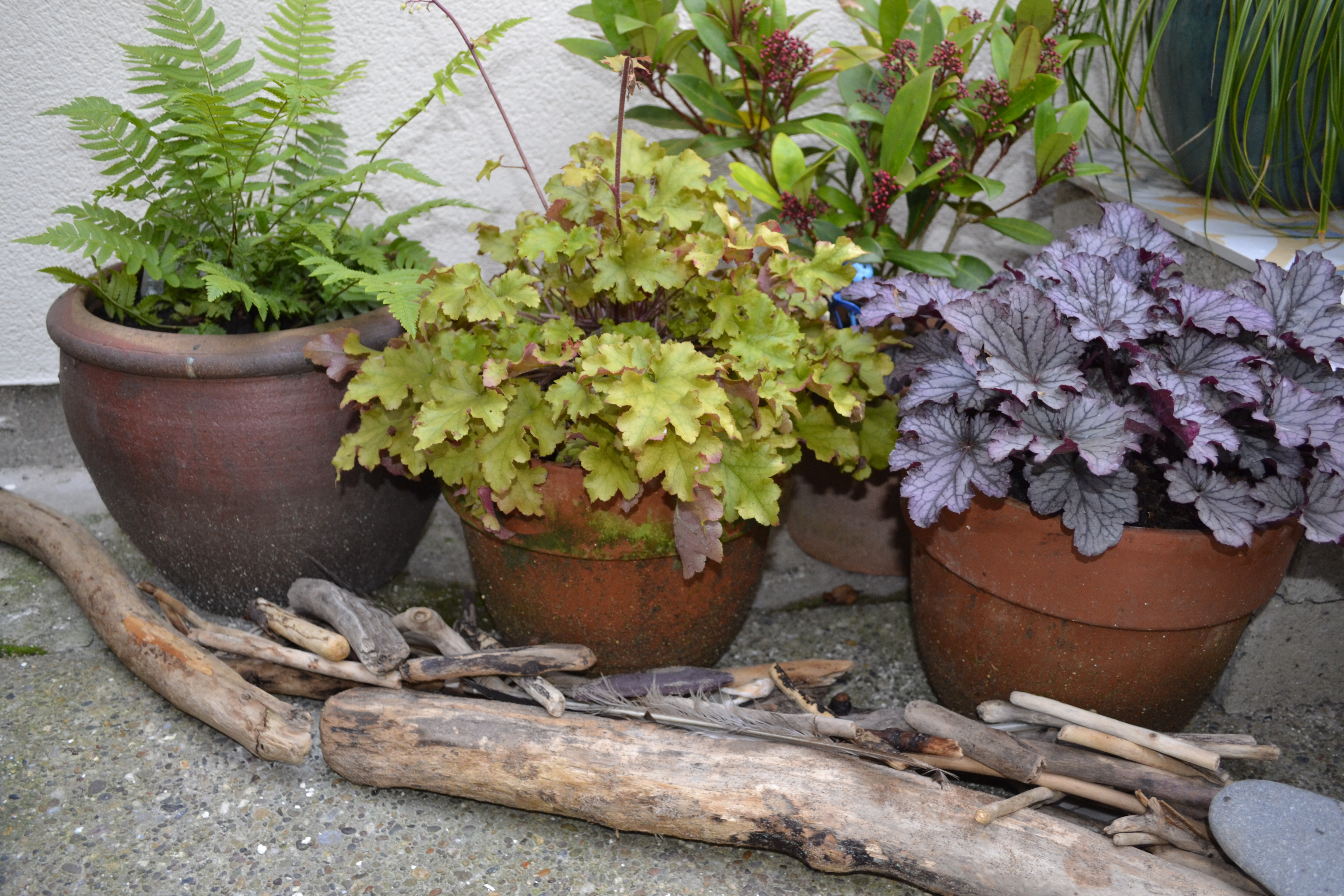 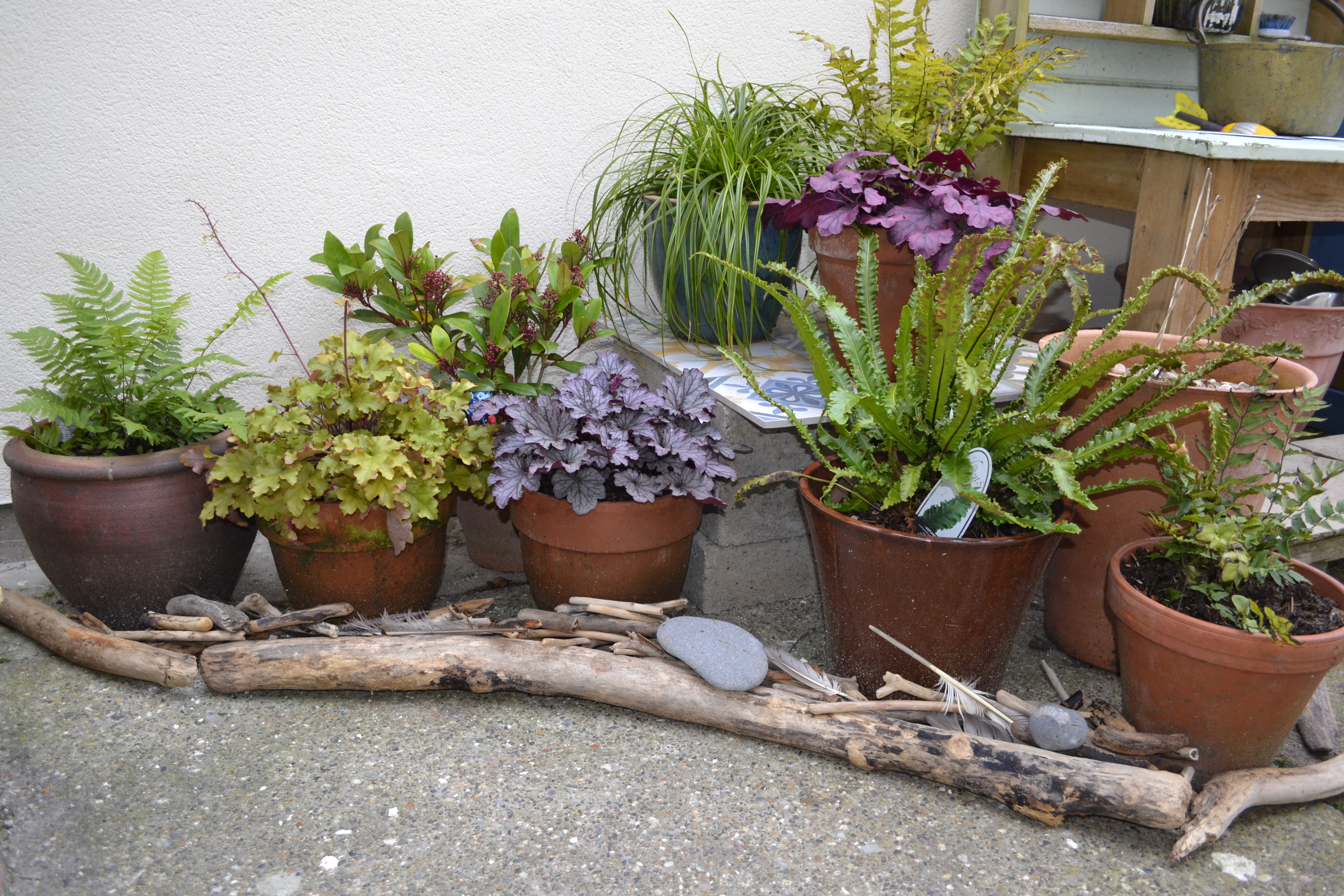 The larger piece found last week has been dug in near the bench of happiness. I was aiming for a zen stone effect. Not sure that I’ve quite got that feel, but it’s a nice piece of wood giving the birds another perch. The surrounding area has geraniums, ferns, and heuchera that will gradually grow around it until it is just poking out. 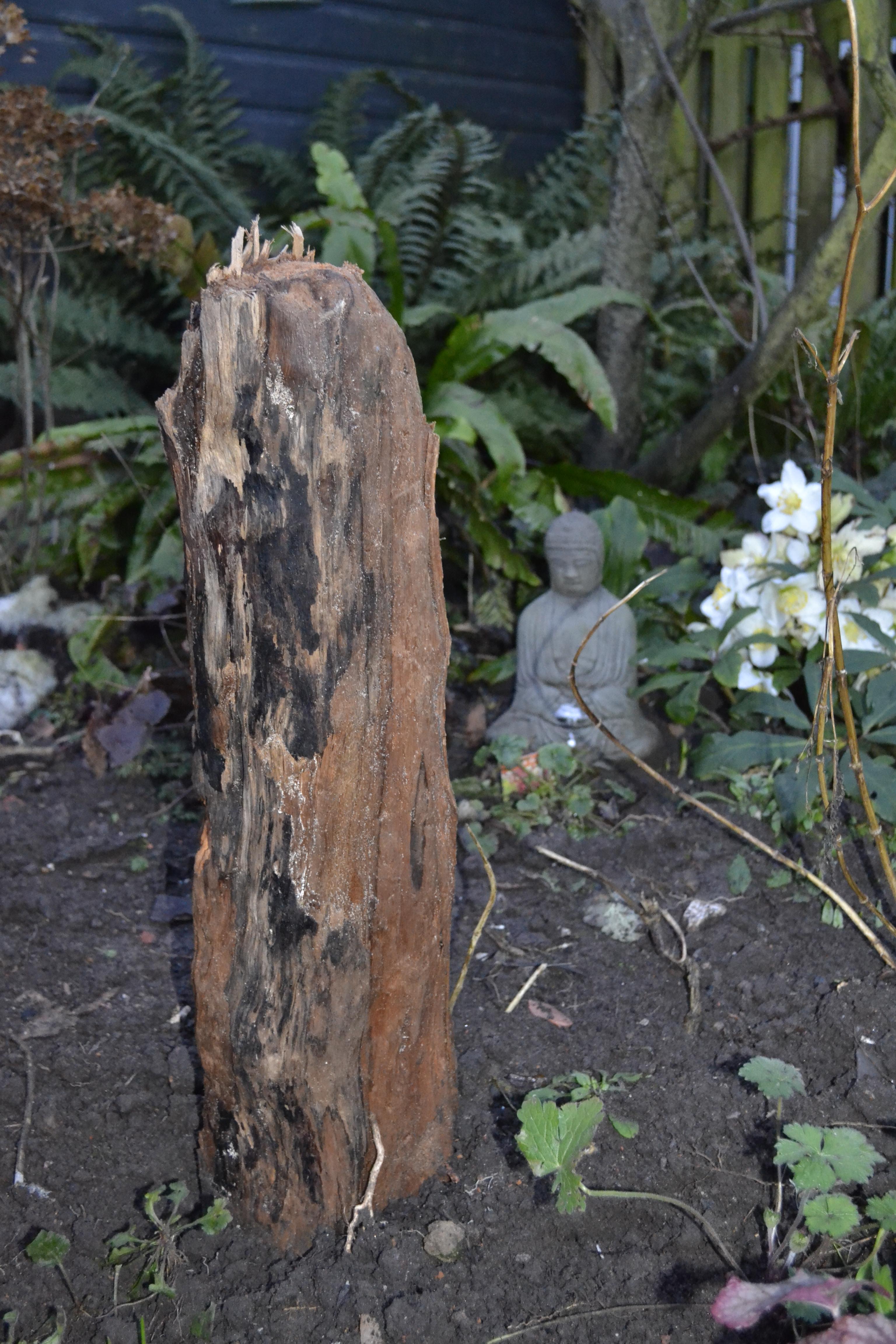 St Andrews B&Q in Hull is clearly plant hell from there discount tables. The plants are raised on benches with strong winds off the Humber drying them out. Then they probably don’t receive much water as it is generally cheaper to get rid of the plants or sell them cheap than pay someone to water them. The table had a mass of roses, shrubs, and heuchera. Even hardy ivy had fallen victim. But amongst the casualties, I found this heuchera ‘raspberry ‘ which I think has enough life still in it to save. I’ll clear the dead and dying leaves and I reckon it will come back strong next year. 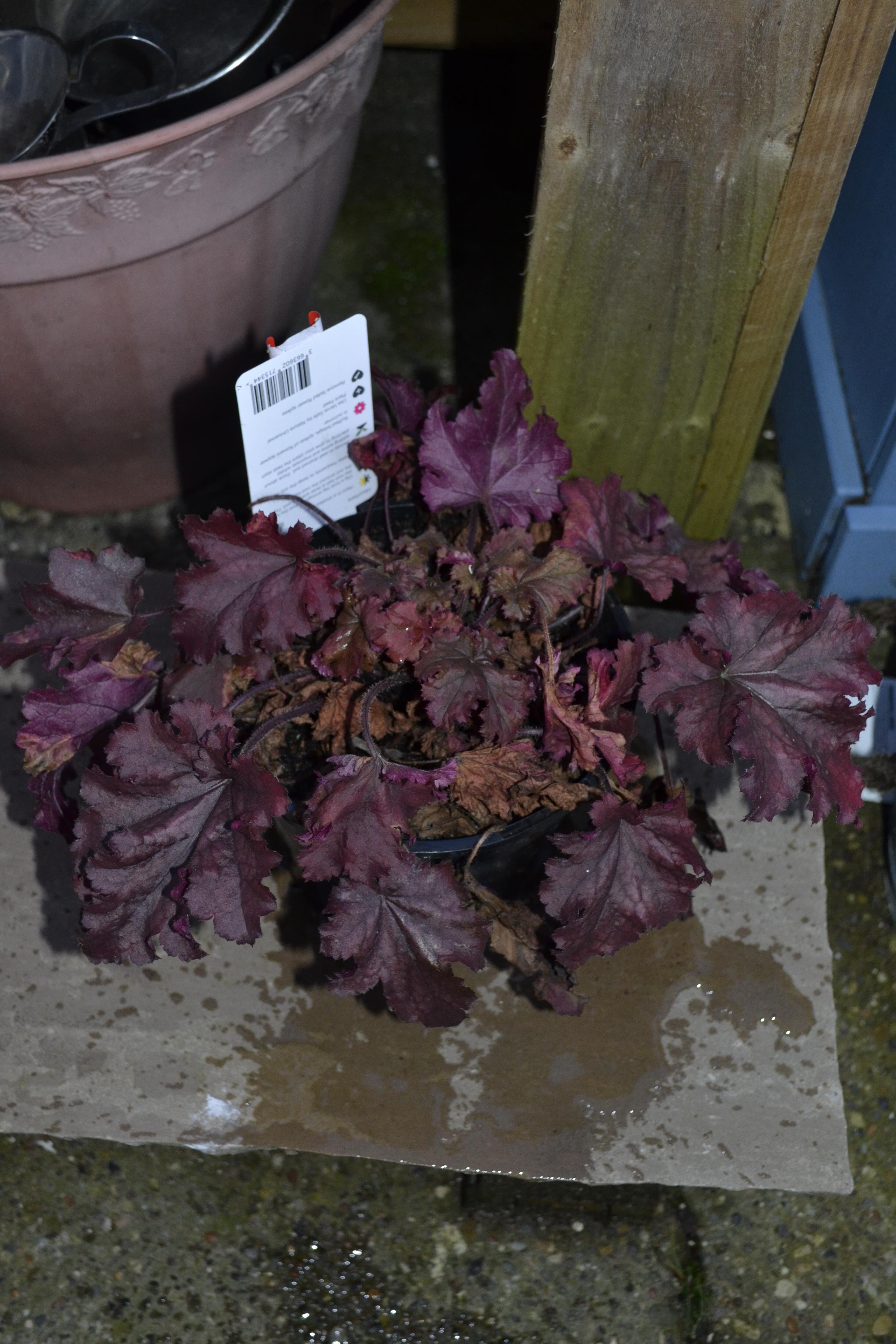 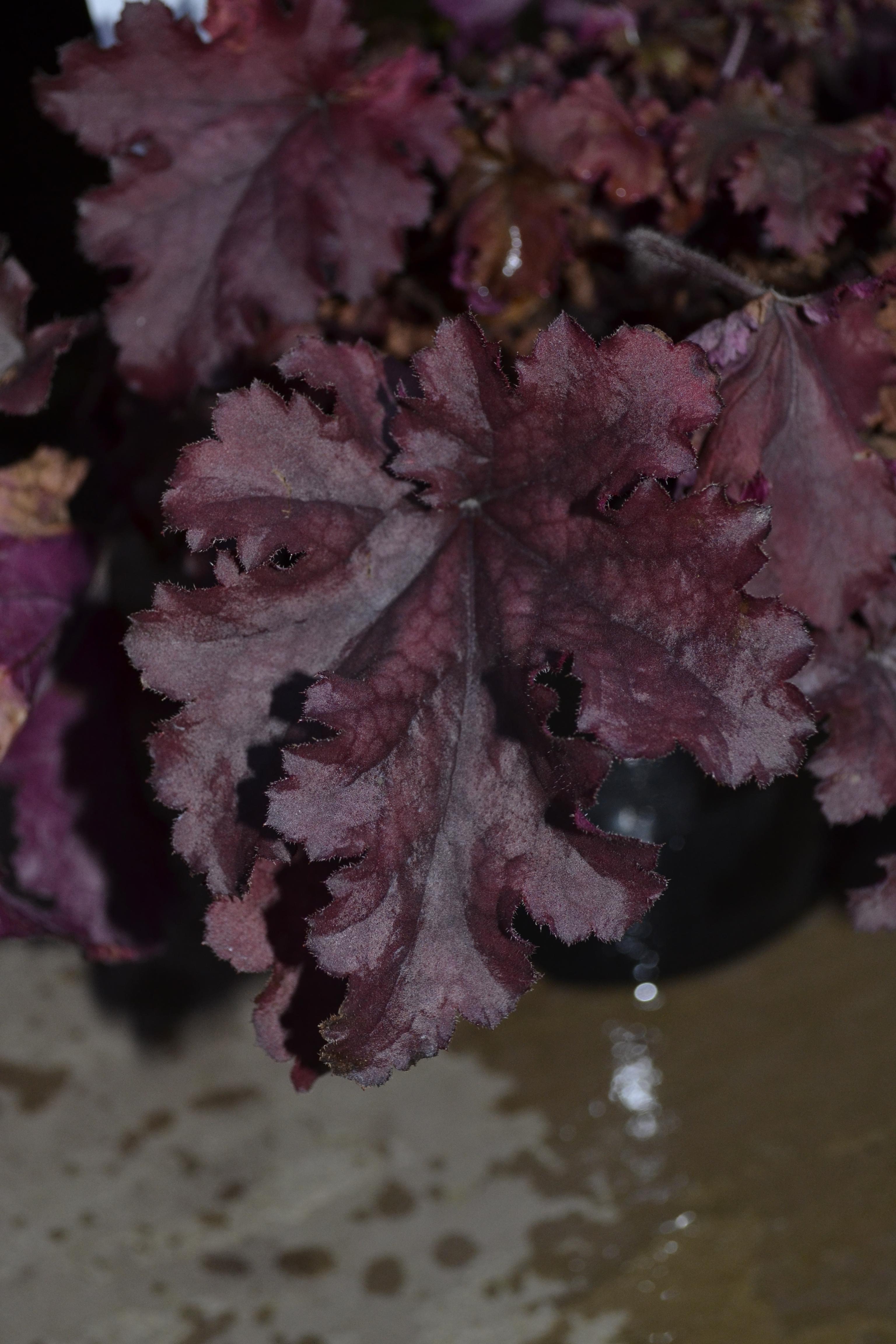 The main reason I wanted to go to B&Q was to check their peat-free compost. B&Q stock a range of peat-free options. Hull stocks Gro-Sure peat-free which at £4.50 is relatively cheap as peat-free goes. The importance of going peat-free has had lots of media time recently. Gardeners question time had a segment about it last week. Sara Venn wrote a blog earlier in the week briefly covering some of the issues in the horticultural industry.  I’ve heard quite a few positive reviews about the gro-sure mix though I’ve also heard that it has been discontinued in favor of their new horizons mix. New Horizons is Westlands main peat-free compost. I’ve found it fine for growing seedlings and plants in pots but it has poor seed germination. Hopefully, gro-sure will be better, though I’ll be annoyed if I then find it is no longer available. Dalefoot compost has been the most reliable peat-free I’ve tried but I largely have to get it through the post and it is 3 times the cost. I may buy a bag of their seed compost for the planned dahlias to ensure success. 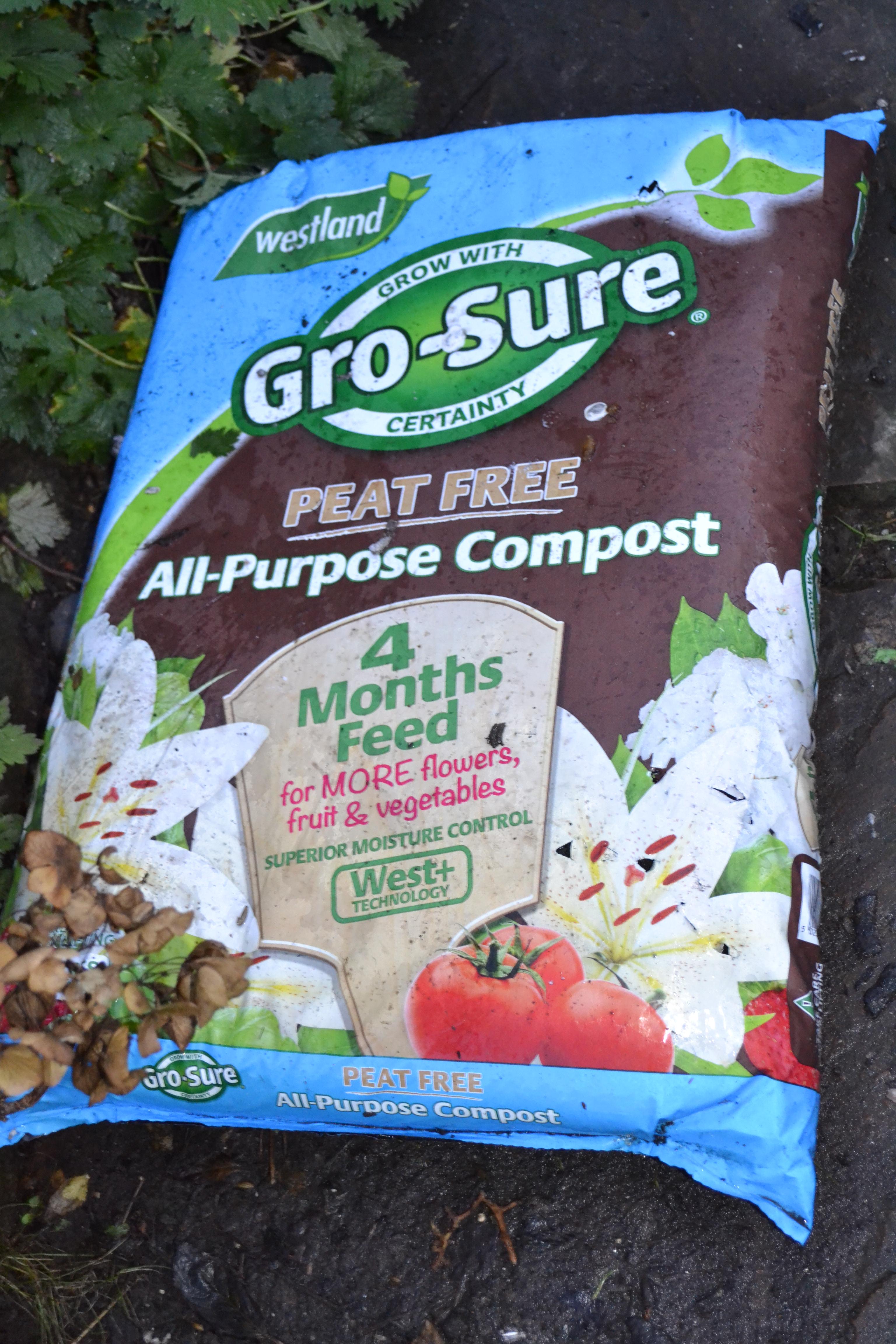 Considering it is mid-winter I’m quite happy that I still have a good amount going on in the garden. I don’t have a mass amount in the way of flowers, but there is still plenty of strong foliage keeping the garden looking reasonable. It’s not the glory of summer but it isn’t too bleak stepping out.

On a side note from my six, I’m sure many of you will have noticed the moon last night or stepped out to see what was going on with the partial lunar eclipse. The moon was a particularly spectacular sight. I manage a decent photo without resorting to the tripod. I suffer from shaky hands making things like the moon awkward to photo. I’ve seen many better shots of last night, but this was satisfying for me. My winnings from last week have arrived so I’m going to be investigating new tools now and then the new Monty show to watch. Enjoy your weekends. 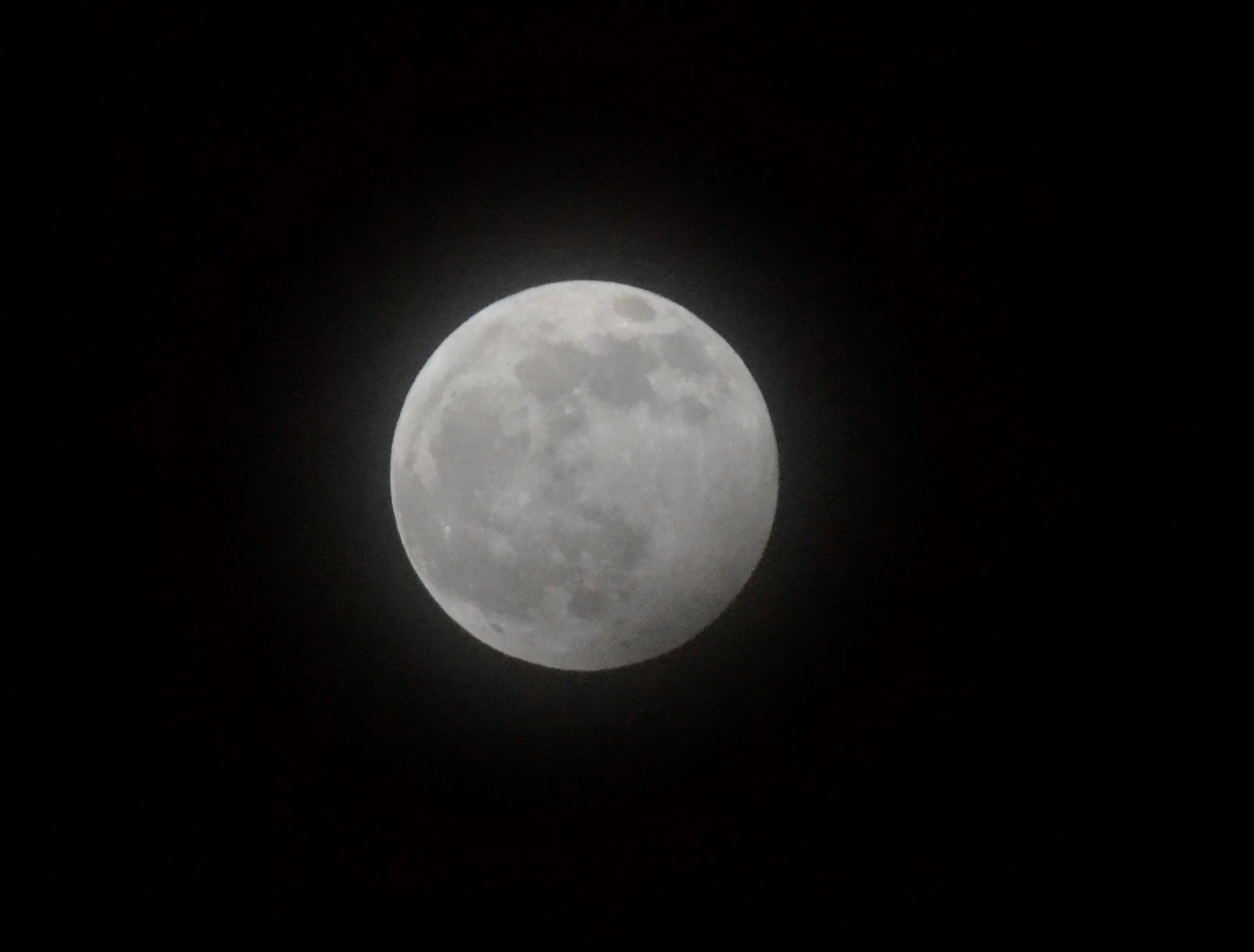