For a while, I’ve been after making a kokedama. I’ve had all the materials for a while but not got round to doing it. With the holidays here and the winter job list going down I thought I’d give it a try. The idea of kokedama originates from Japan. Kokedama translates as moss ball, though sometimes known as poor man’s bonsai. They’ve become a bit of a craze in houseplant circles. Though I’m more interested in making one for outside. The basic idea is an ornamental plants roots wrapped in a ball of soil, then moss, tied up with string. They are often hung, so can be used as an alternative to hanging baskets. Ferns are popular choices for the plants as well as growing bonsai trees within. I recently saw one with ivy in, which I quite like the idea of as it would trail nicely. Gardeners World did a demonstration of making one last year, so they are becoming more common.

I’d bought a kokedama kit a while ago without thinking about the peat content. The kits normally contain bonsai compost and peat compost. You mix the two together and add water steadily. This year I have tried to buy purely peat-free compost, though many of the plants I’ve bought will have been grown in peat. I think I’ve done pretty well buying from seed, growing from cuttings and buying from peat-free sellers. If I make another kokedama I may try and make my own mix. You are aiming for a mix which will hold its shape when pushed together that still has some aeration. I might try making a mix with akadama, grit, leaf mould and my own compost and see how I get on, but that’s something to think about in the future. I mixed the two soils together and added water gradually. If it gets too wet it will be harder to dry it out than to make it wetter. As it is I think I went too wet. It needs to be able to be squeezed into a ball, you can squeeze some of the moisture out in this process. 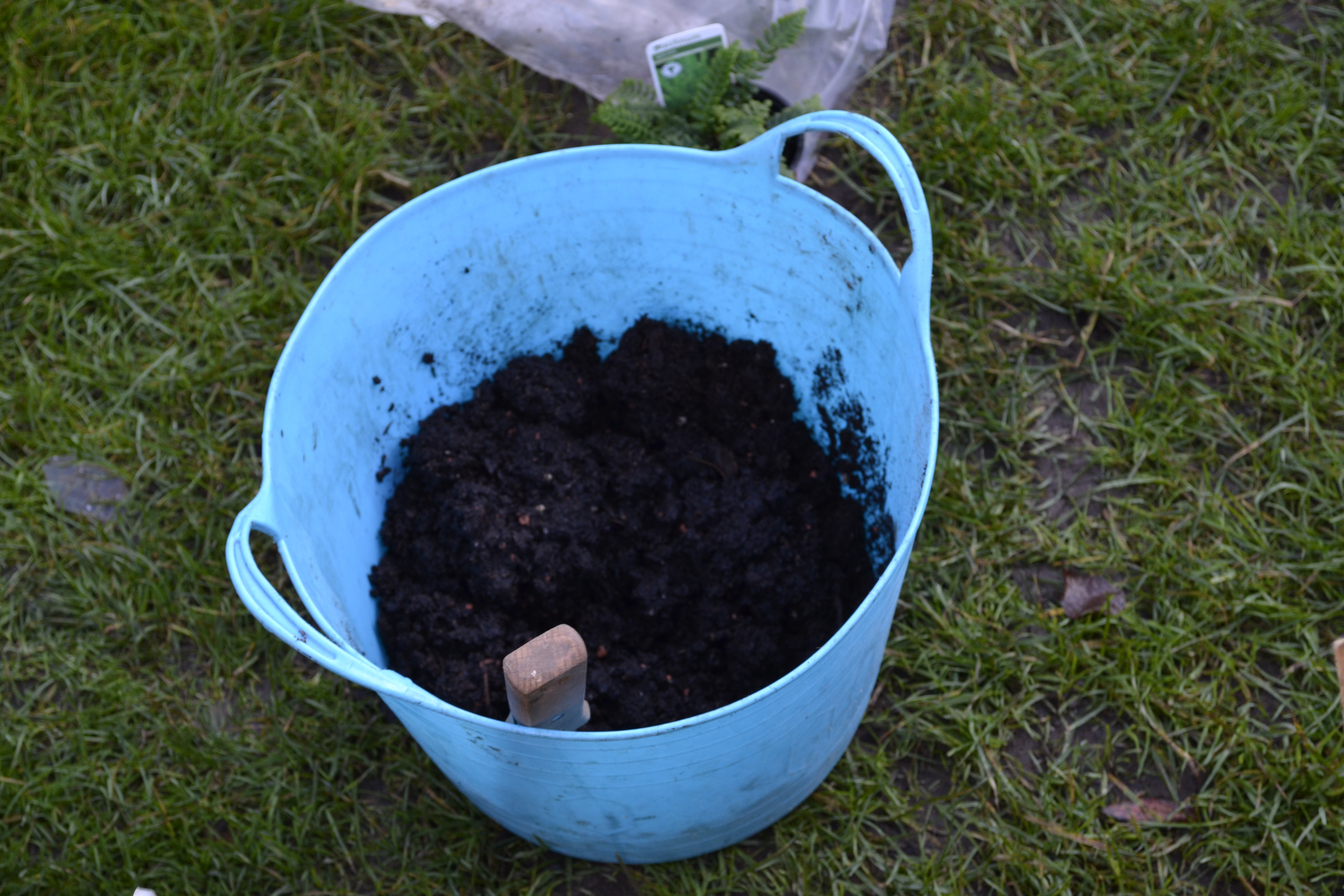 I’ve gone with a Blechnum Spicant fern for the plant. I’ve put a few of these in the ground recently so will be nice to have some on the patio as well to mirror elements of the border. It’s a fairly tolerant evergreen fern that should stay looking nice for a while. I doubt that the kokedama can be kept indefinitely. After a while, the plant can be moved onto a pot or the ground. But it should make for a nice little temporary feature like most hanging baskets. 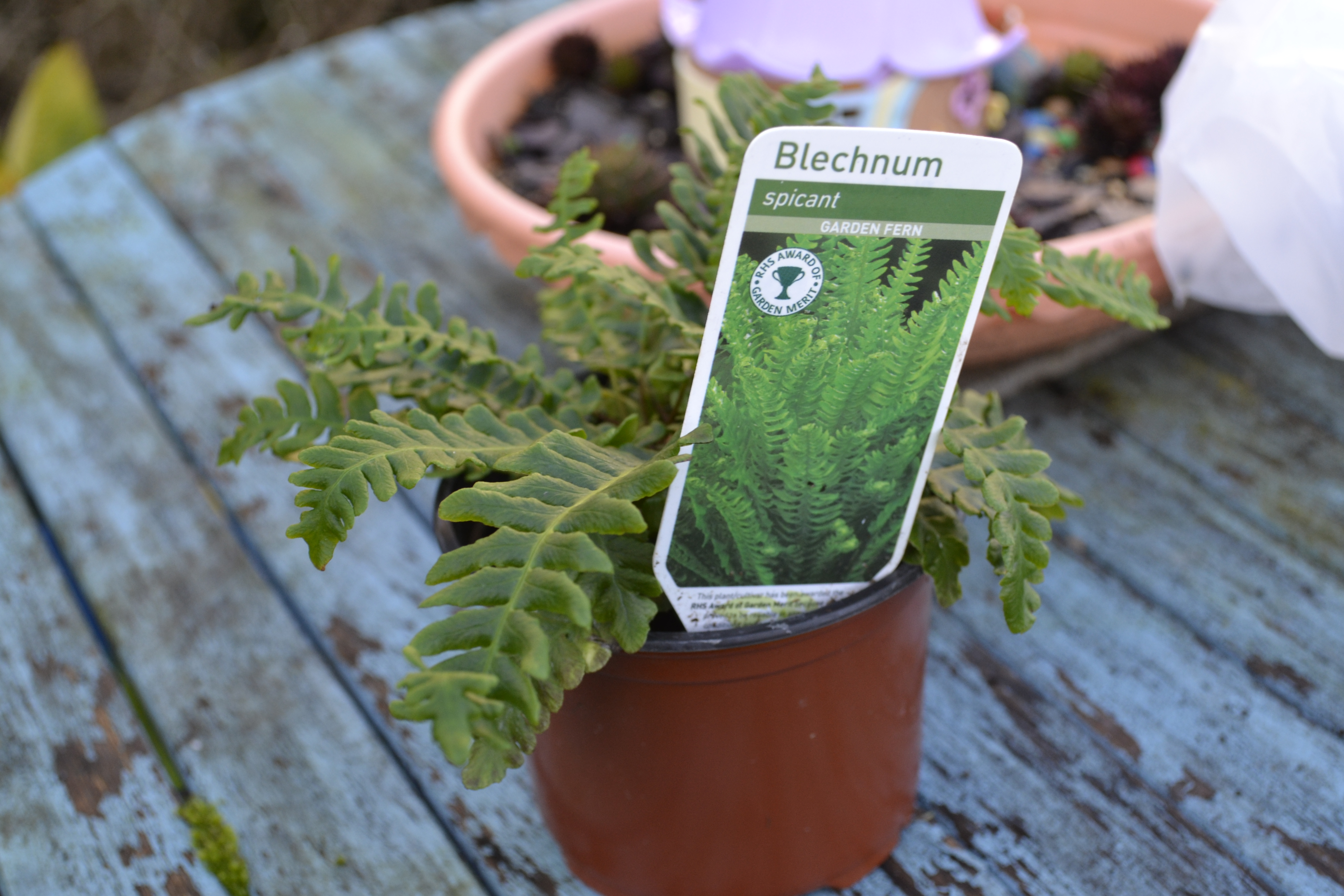 I took the fern out of the pot and shook soil off and washed more off carefully, trying not to damage roots. 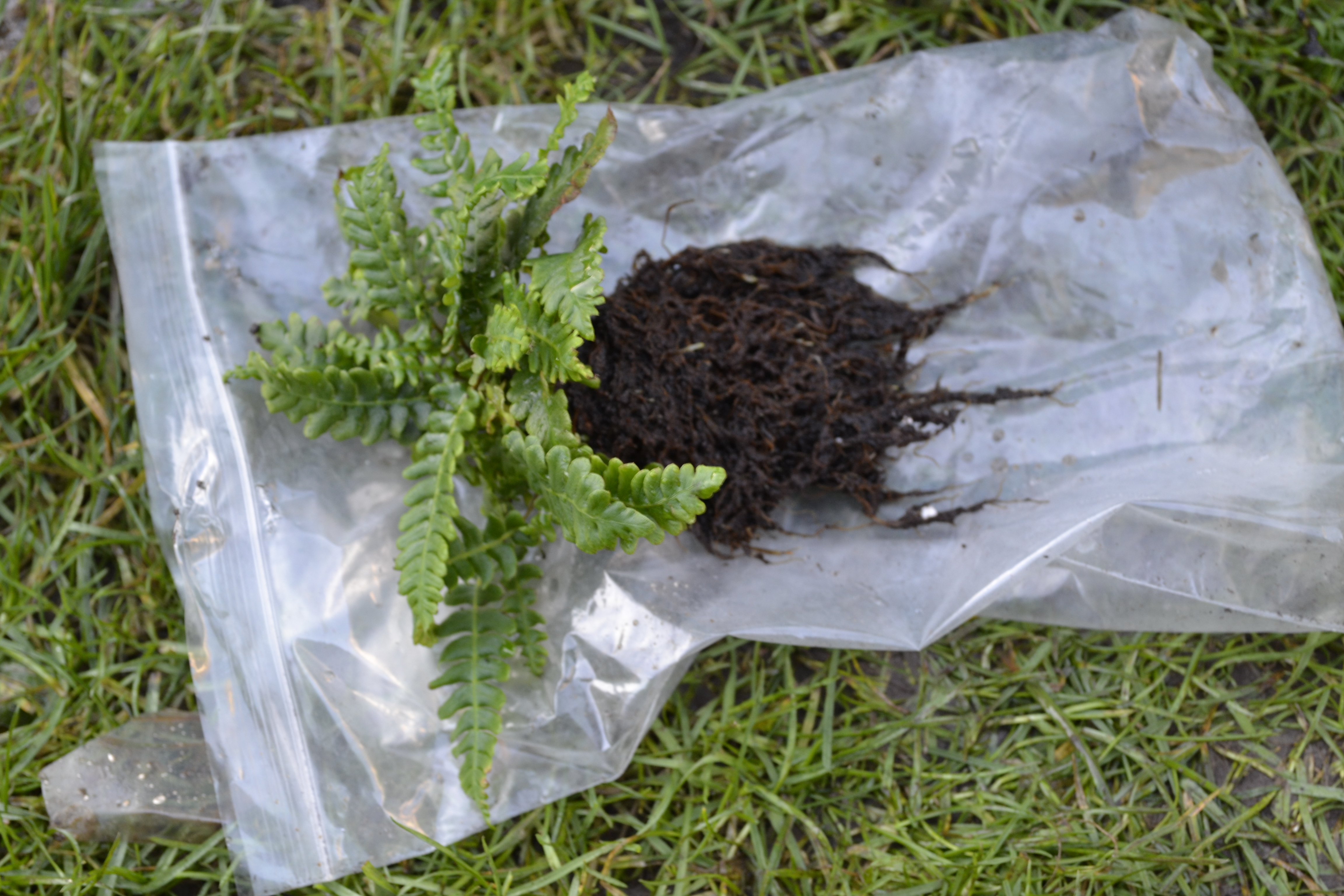 Then, taking the soil mix I moulded two handfuls to make half the balls. These were then pressed around the roots. I think my mix was either too wet or else lacked enough clay content as it didn’t hold its shape that well. I then wrapped the root ball in a sheet of moss. Twine is then wrapped around starting from the top to hold it together and tied off. 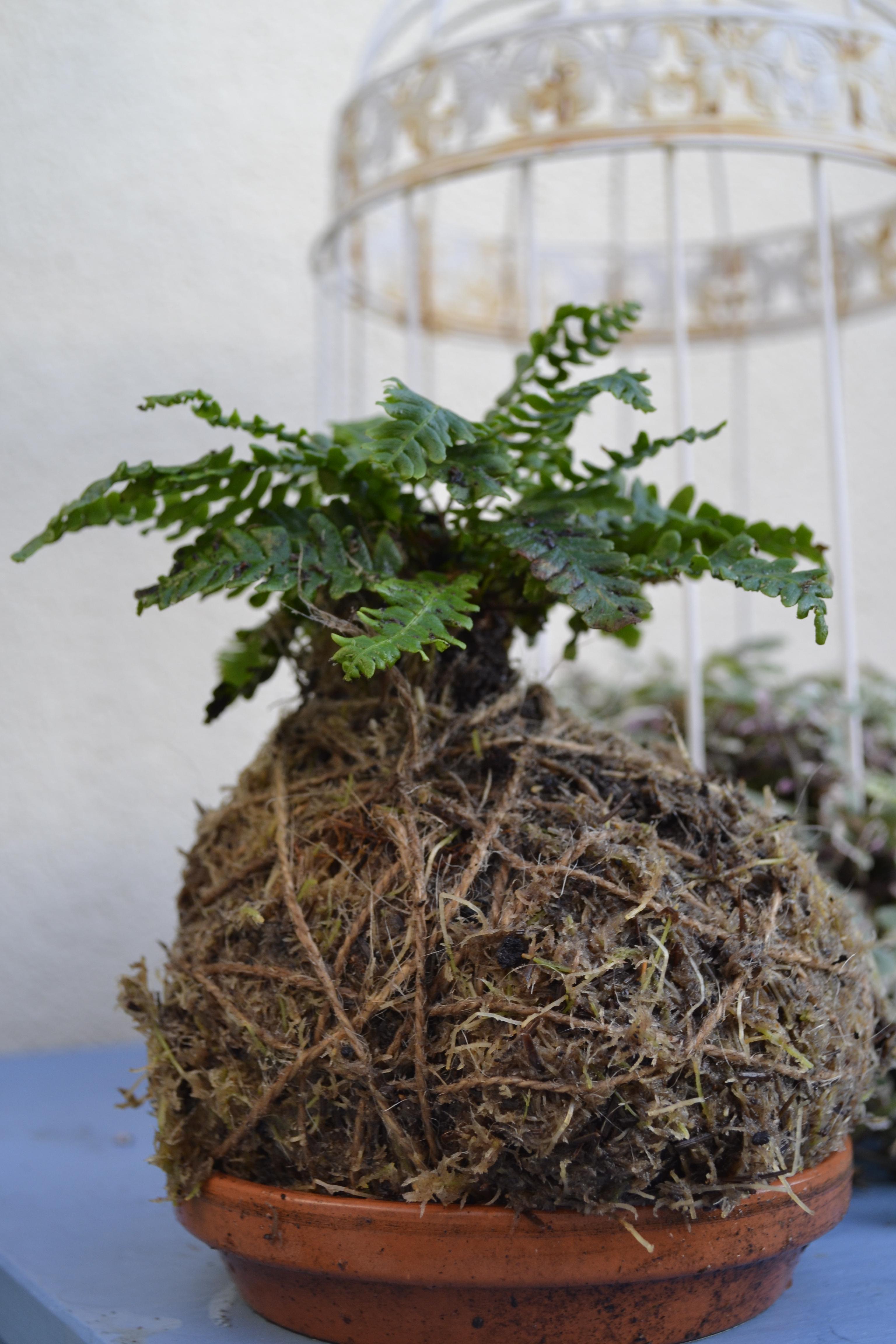 My end result is a bit dumpy. It certainly doesn’t have the perfect Japanese arts of an ikebana arrangement but it encapsulates the concept of wabi-sabi perfectly. It certainly isn’t perfect, permanent and is full of imperfection but I accept this and really like it. Currently, I’m sitting it in a pot saucer so it can soak up water as a common issue is that they dry out. You can test if they need watering by holding them. If it feels light give it water. They are often hung as I already mentioned or can be elegantly displayed on a slate or bonsai pot. The moss should green up again for some moisture. 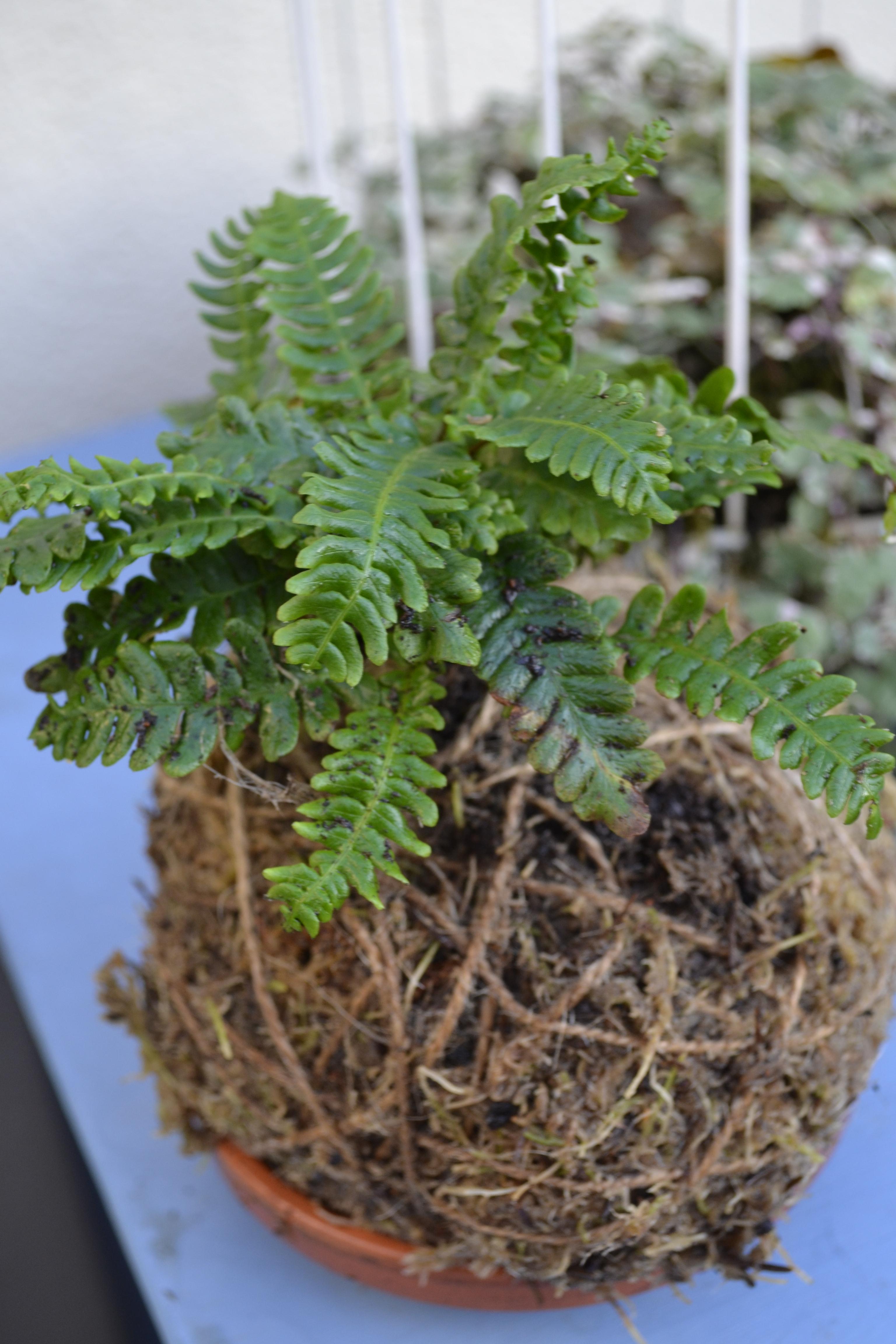 I have enough materials to try one more, so I will give it another go and see if I can get something more rounded. But overall I am happy with my little dumpy arrangement. I like moss and ferns, so it’s a good combination to me. Now to find a good spot to display it. Within recent changes, to the garden, I think I can find a nice spot for it. I’ll leave you with the random Kirsten Dunst cover of turning Japanese by the vapors created for a pop-art display at the Tate.