So, it is time for the final six of the year. We have made it past the shortest day of the year so things will start picking up from this point on. I think I’ve managed a six every week without fail which is an achievement in itself. The garden has moved on massively since I started taking part in six on Saturday. Seeing everyone else’s gardens has shown me a mass number of seasonal options. As a result, my own garden has developed with a much greater spread of seasonal interest. So, thank you all for sharing your gardens.

Earlier in the year, I’d removed the white camellia. While it had quite a nice shape the flowers were frost-damaged every year. On the white flowers, it showed too much. I was bought a red camellia ‘ Dr King’ for my birthday a couple of years back and it is getting to a nice point now. It is covered in buds ready for spring. These suffer from frost damage as well but the red flowers don’t show it as badly as the white. The leaves are evergreen so it provides a bit of greenery through the year but the foliage isn’t much to shout about. 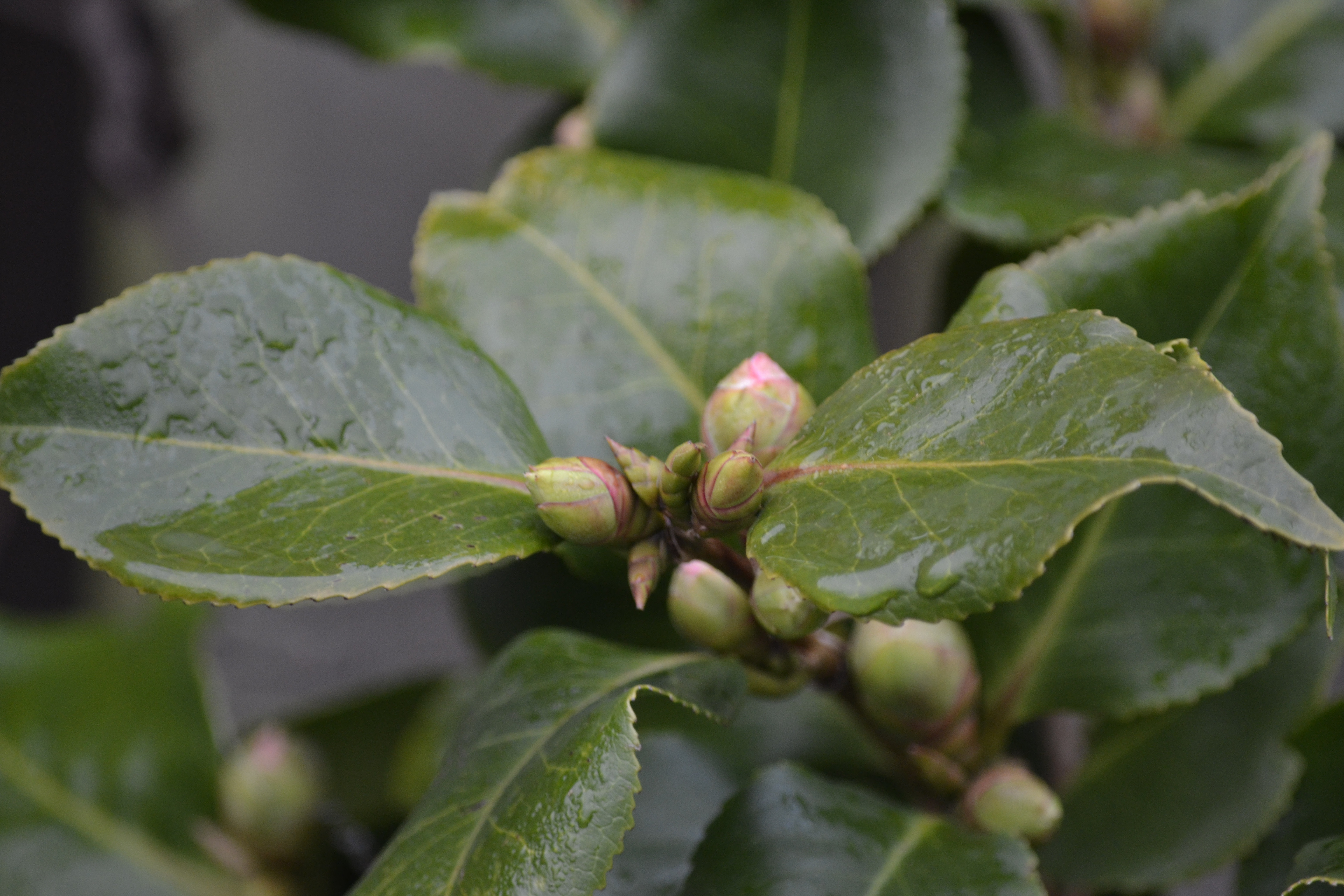 Back in November Sarah Raven was selling off the bulbs at bargain prices. SO for just over a tenner, I got over 100 alliums that I finally got round to planting just before Christmas. A rare bargain from a site that is usually one of the more expensive choices. I’ve got 15 allium nigrum. I grew this white variety this year and it was stunning. These will top up the couple I had in this year. I also bought 15 Allium ‘Caméléon’. This is a new variety to me, similar to the nigrums but with a little colour in the centre. Then I went for a mass 80 Allium sphaerocephalon. These are small-headed alliums. These will potentially self sow saving me having to bulk out with new additions each year. All three varieties should be popular with wildlife. Opening the box it had a wonderful garlic scent I’ve planted these along both borders. I’ve still got a few to go, but these should give a great display along both borders and then leave some good structural heads as they fade. Alice took a handful and has rammed them in pots so I may have a few surprises. 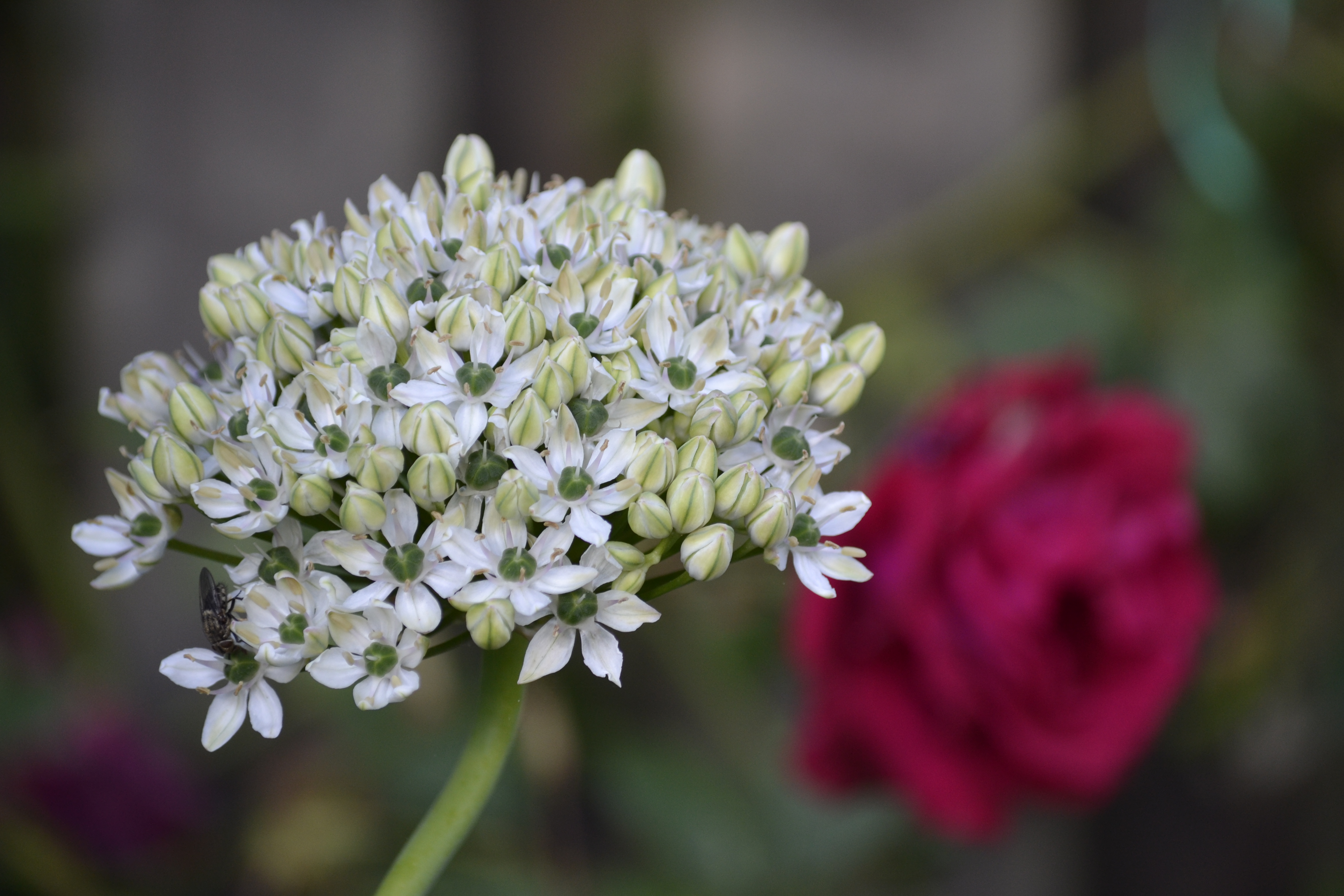 I’ve taken a few hardwood cuttings of the dogwood. I’d seen a few articles listing it as the time to do it. These can then be used for pots. Alice found a snapped off hydrangea and stuck it in the ground, so I filled a pot for her and cut her a few bits off. I’ve used some vermiculite in the compost mix and the cuttings were dipped in rooting powder. We’ll see if it makes any difference. I’ve left them soaking in Alice’s mud kitchen to get them moist before I take them out. 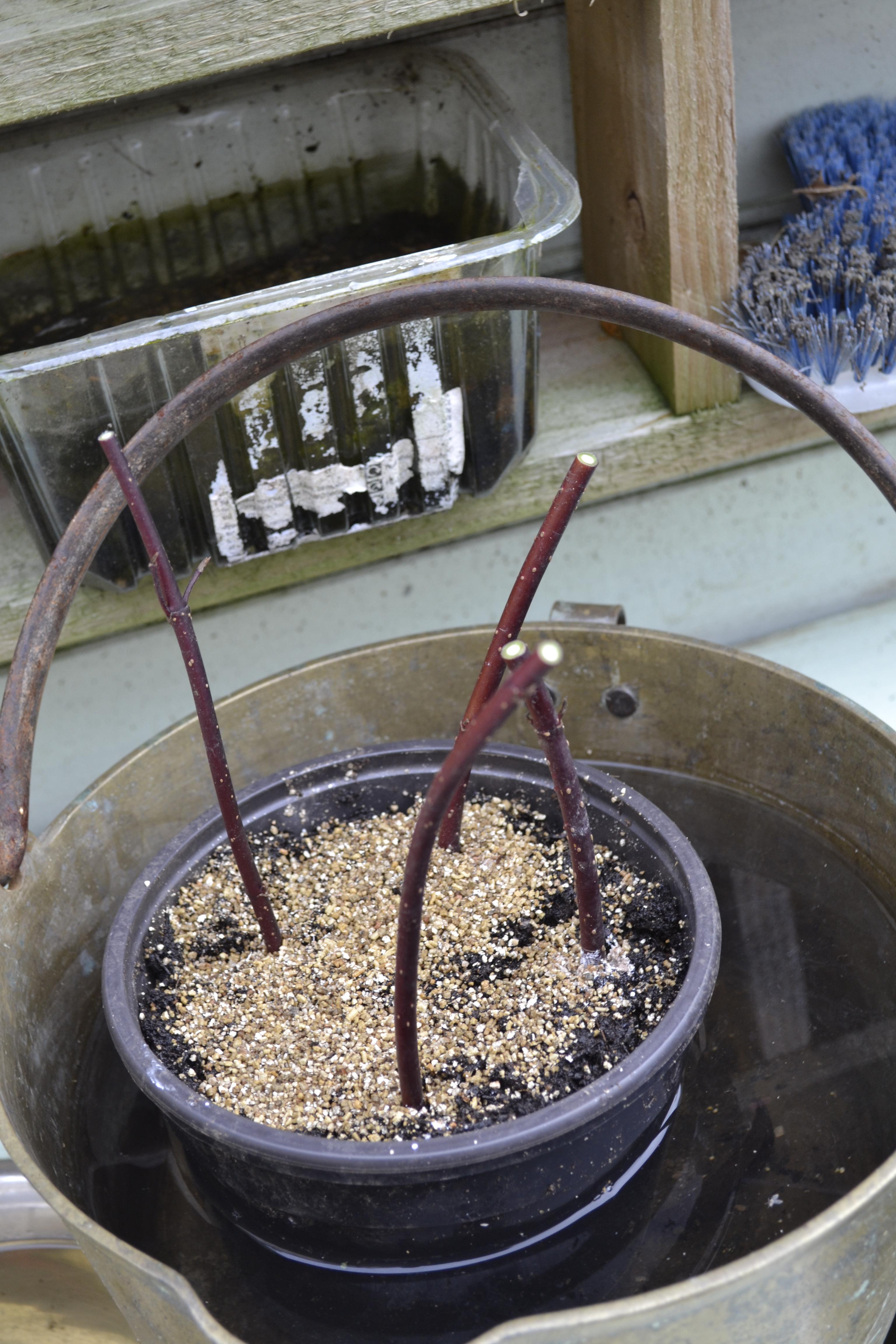 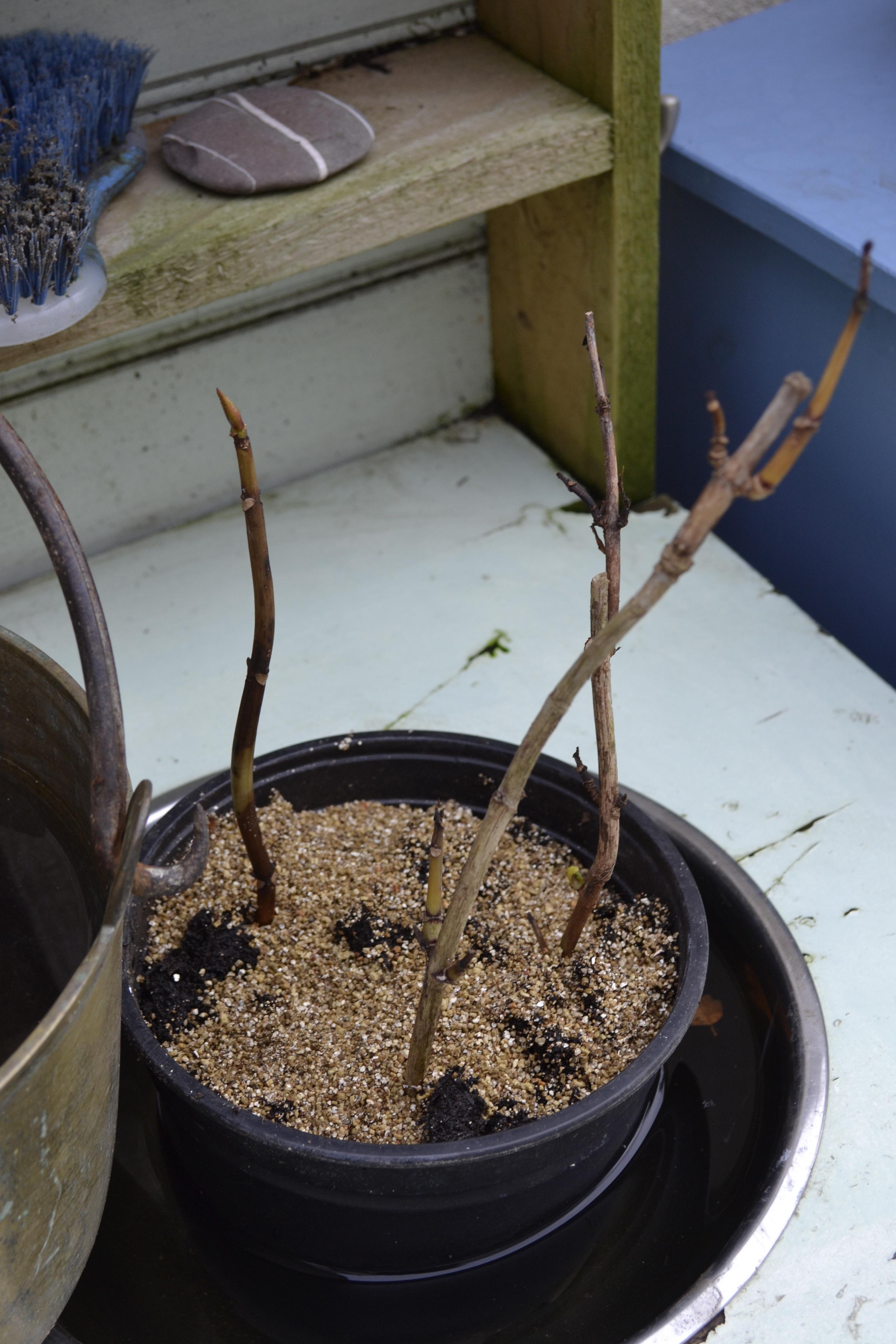 I’ve picked up two cheap heucherella. These were in the discount section. I’m a little dubious of why winter plants have been reduced in winter but I think it’s just because the leaves have been nibbled a bit. I’ve checked the roots for vine weevil and they look ok. The colours are fabulous. I’m thinking these will go in the front garden as I’ve got a good spread in the pots in the patio already. The purple is labelled as ‘cracked ice’. The green is just named as mixed. 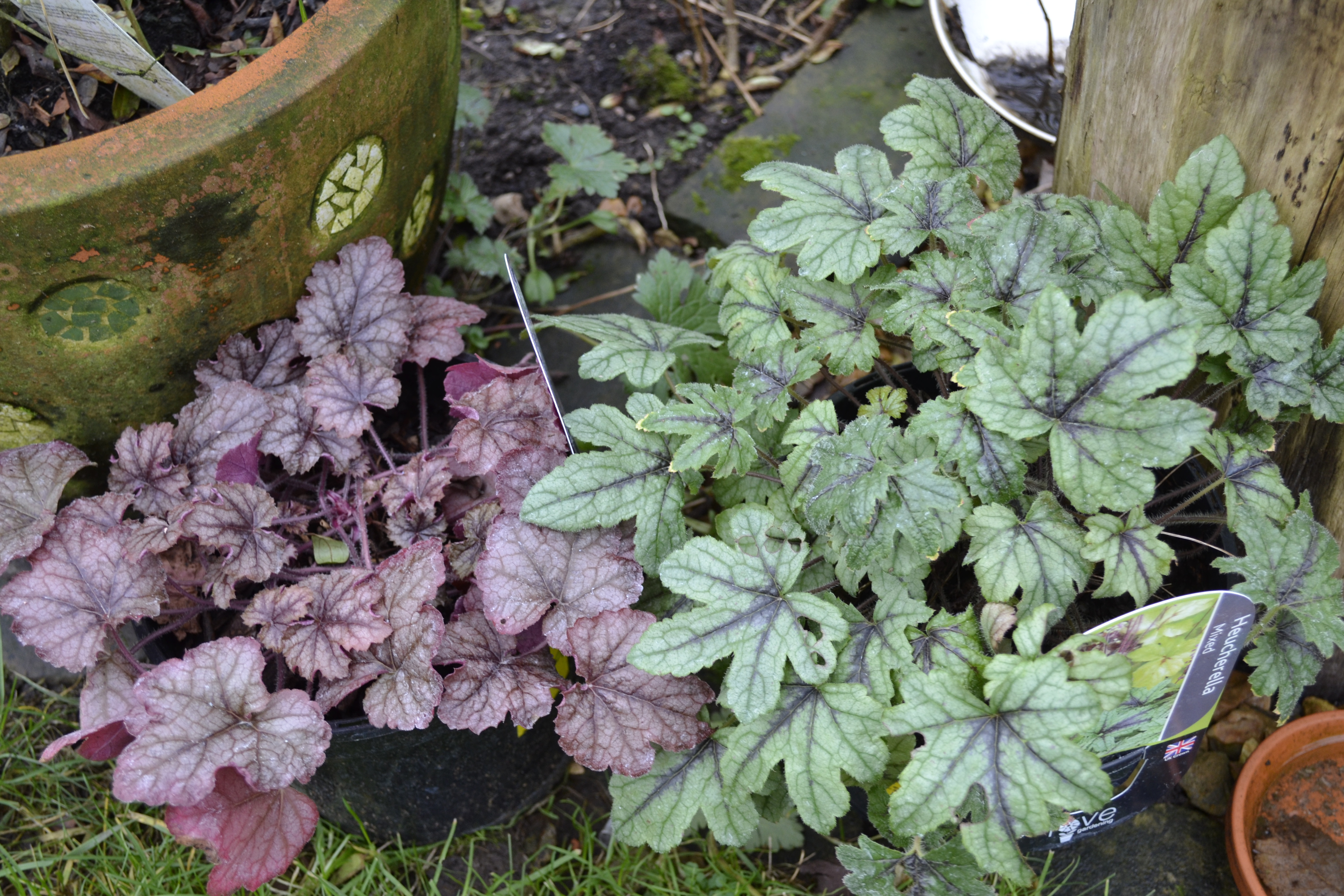 Amy and Alice bought me some ceramic clattering mushrooms which I’ve paired in the border with a fairy I’d bought Alice before Christmas. The way things are heading I’ll end up having to list my garden on open gardens as a fairy garden as they are continuously spreading. 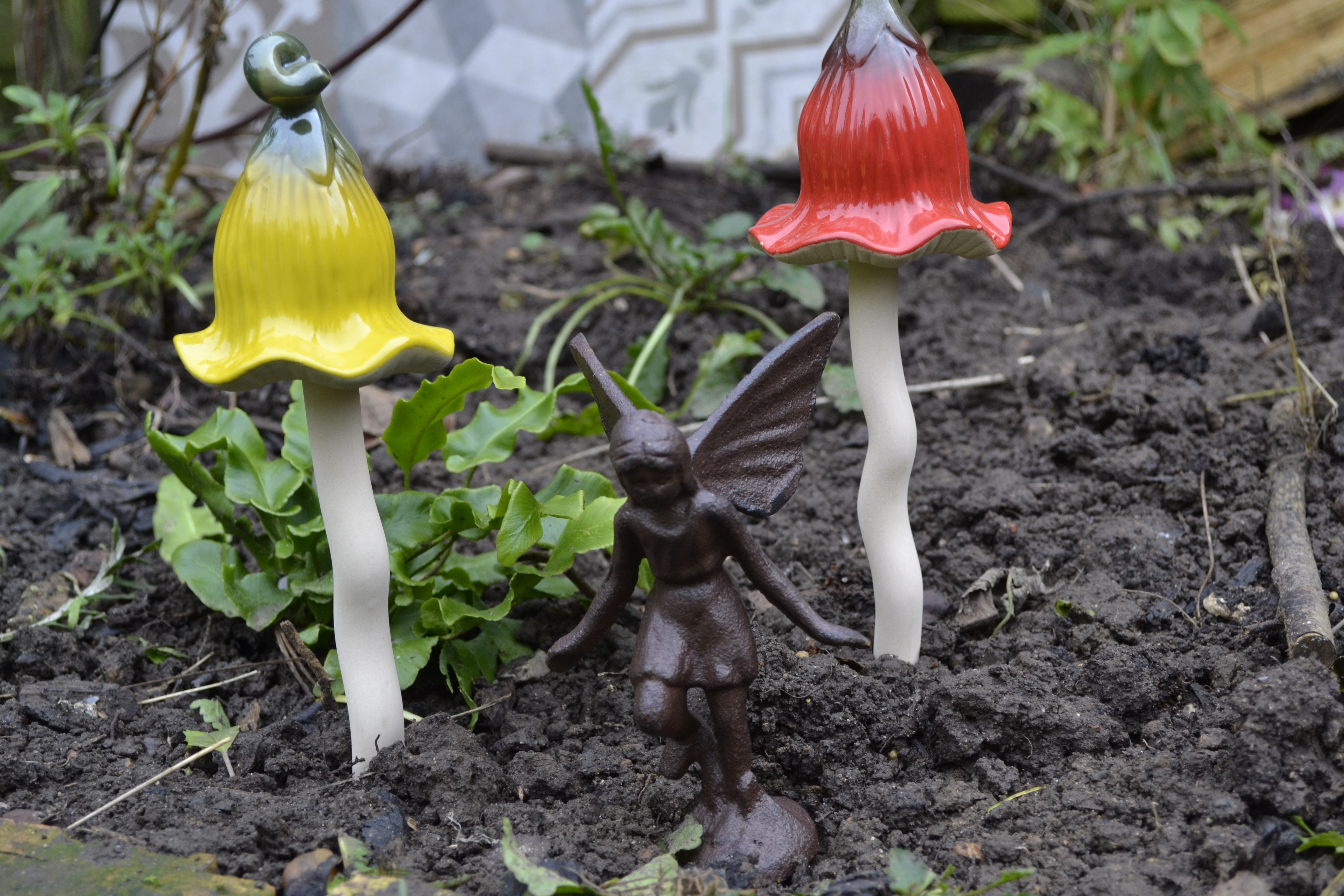 Our wheelbarrow came with the garden. It was falling apart when we moved in. Three years on there are more holes than barrow left, so I’d asked for a new wheelbarrow. Amy has treated me to to a Walsall wheelbarrow. I’ll be needing it to shift soil over the next week as got a good bit of digging to do in the front garden and I want to shift the soil to the back garden. 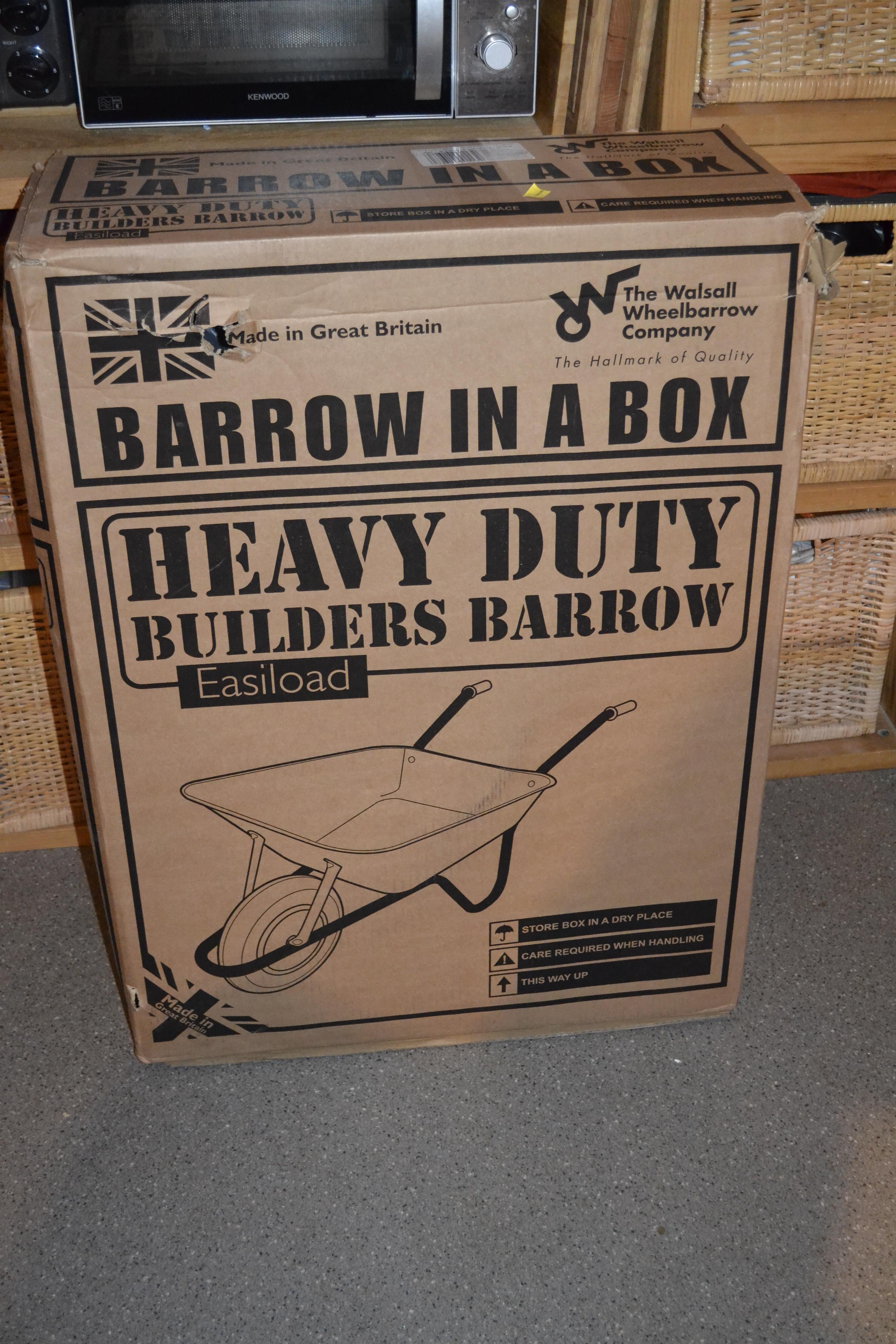 Alice helped with supervising the construction. 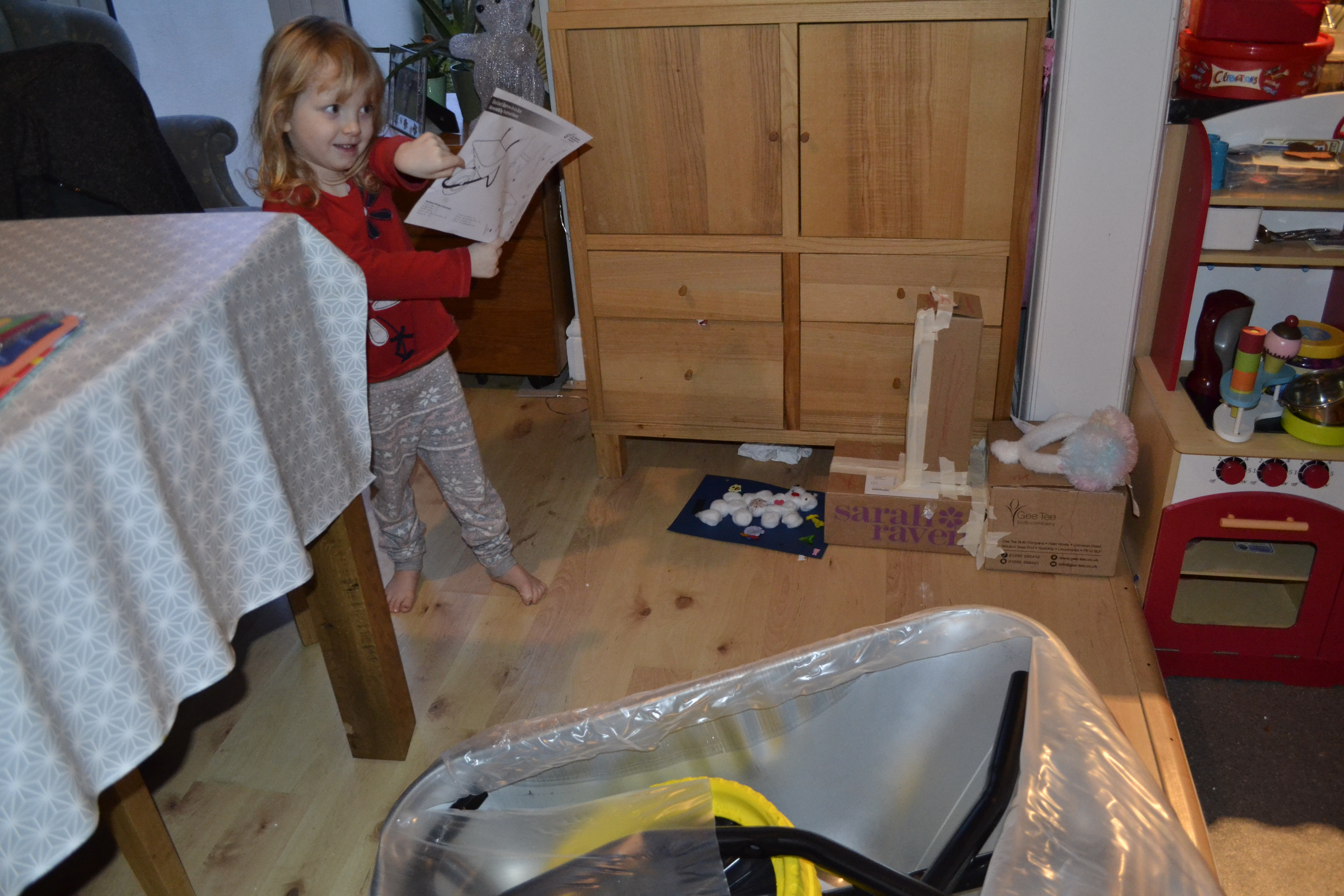 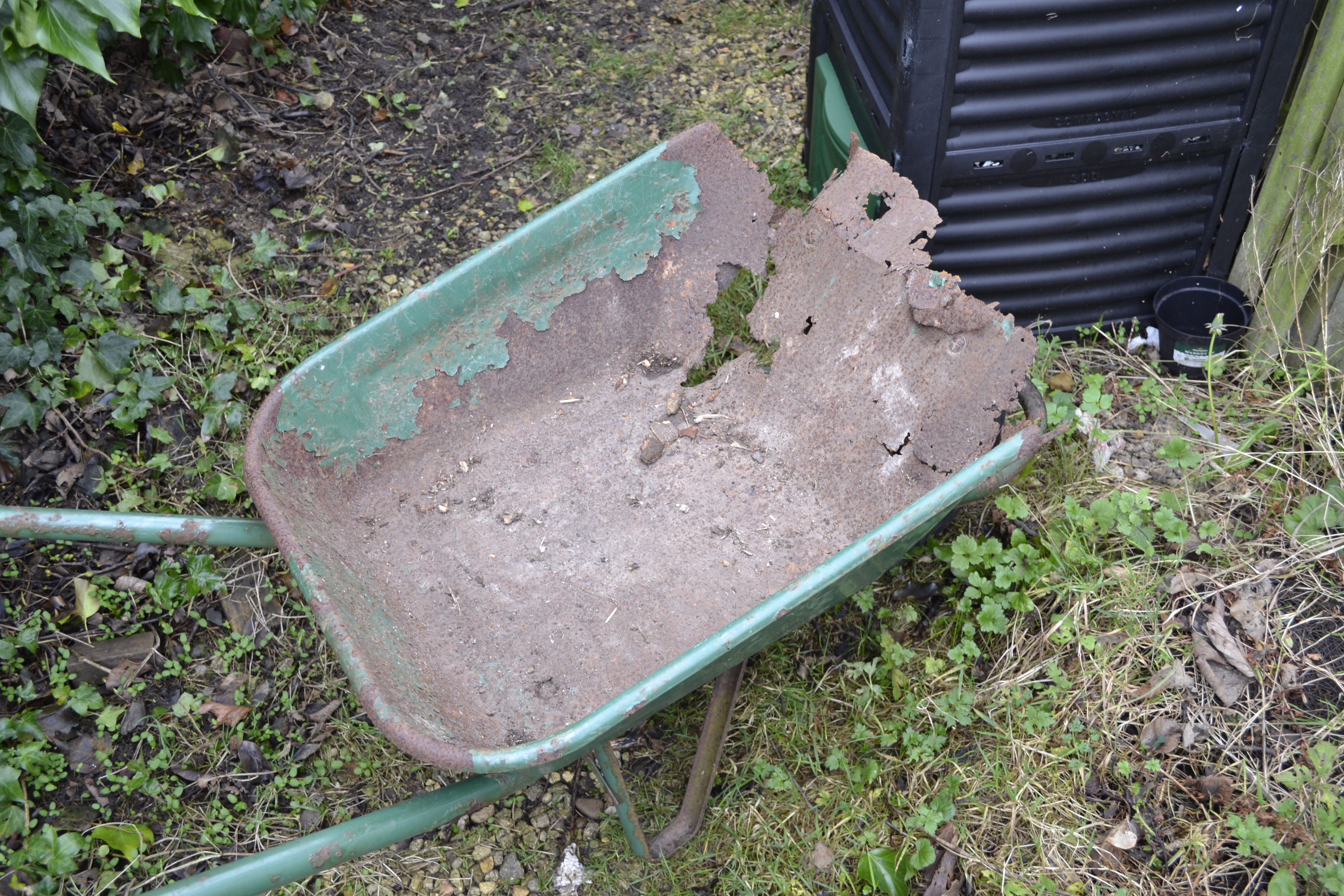 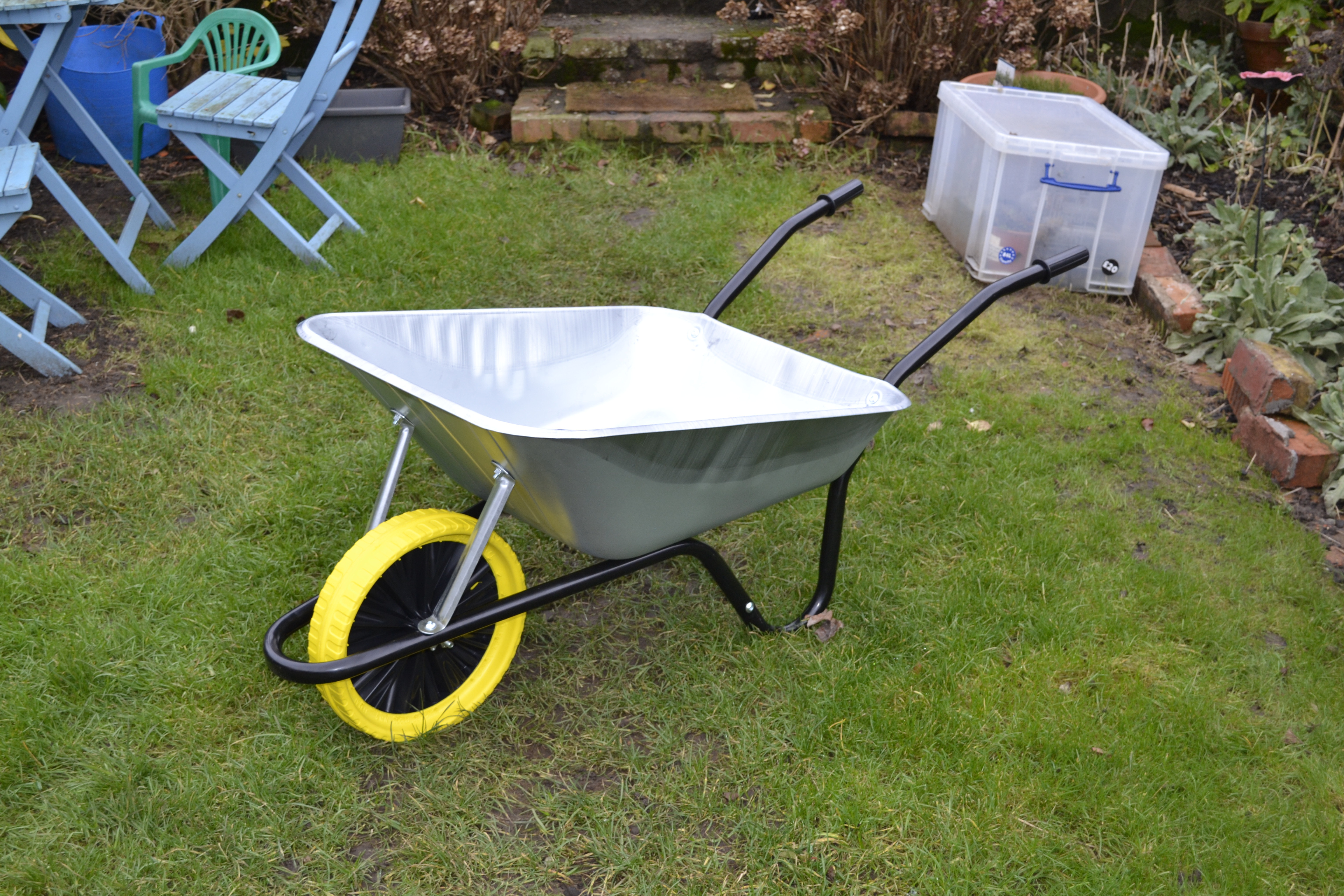 It’s been a good year in the garden. There have been lots of successes with plants I’ve grown for the first time, many from seed, the front garden is coming on well and many of the plants in the back are getting to a reasonably established point after 3 years. Still more plans for next year. Enjoy your last weekend of the year and the decade! 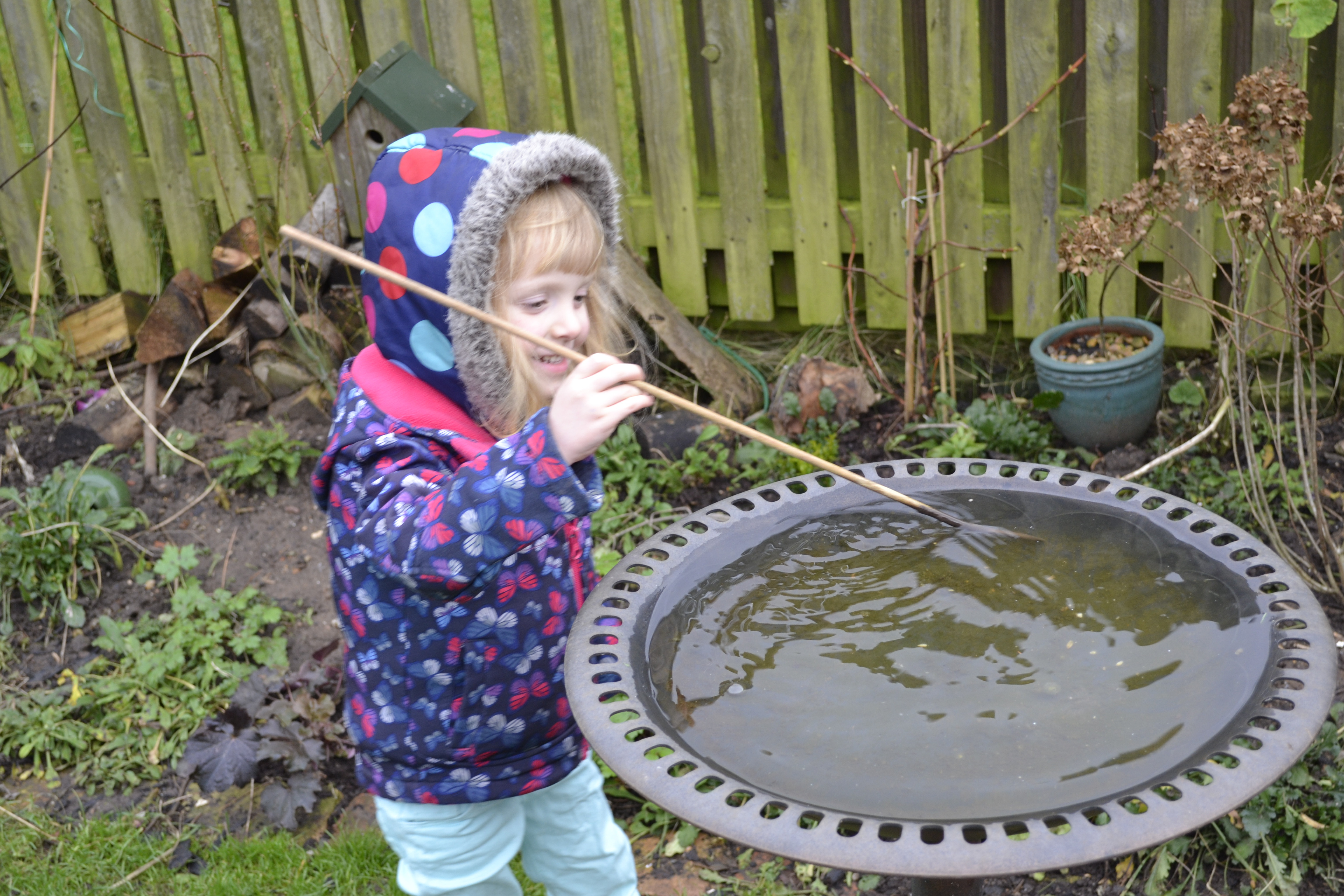