As we reach the end of the year I thought I’d take one last look at my main garden project this year. I have been working on revamping the front garden. It was previously just pebbled with a bland pot of green in the middle. I have tried to plant so that there will be a nice mix of shade-loving foliage with a few different periods of seasonal interest. Between the ferns and the rocks, it has elements of both Japanese gardens and Victorian ferneries. Both influences I am happy with. Overall it is starting to come together. Almost all the plants have been bought at reduced prices or out of season. So I have opted for plants that weren’t always in the best of health but I was confident that they would recover. It’ll still be a few years until it all fills out properly but I’m already happy with the progress.

The view from above shows I’ve kept a reasonable framework of evergreen plants for winter. I planned the planting to try to keep a reasonable level of interest through the seasons. The ilex crenata along the border edge has filled out a bit since planting. It should eventually form domes of green but at the moment it’s still a bit patchy. The patches of Asplenium ferns are holding out the best of the evergreen ferns. I was expecting these to be the toughest as they grow wild in my local area. A lot of the other species are still small but will look good next year as they fill out. The stepping stone path still needs finishing. I used a few temporary log cuts for the last stepping stones and haven’t got round to replacing them. There are quite a few gaps where the hostas have died down, so may look at filling next year with more cyclamen so there is something on the go through the year. I did consider white primulas to fill the gaps but they don’t have much to recommend them in terms of foliage. The rocks are settling into there positions and the moss is settling back over them. The builders came back to finish the pipe so it drains out the garden. The water butt hasn’t been needed much of late but is well filled for next year. 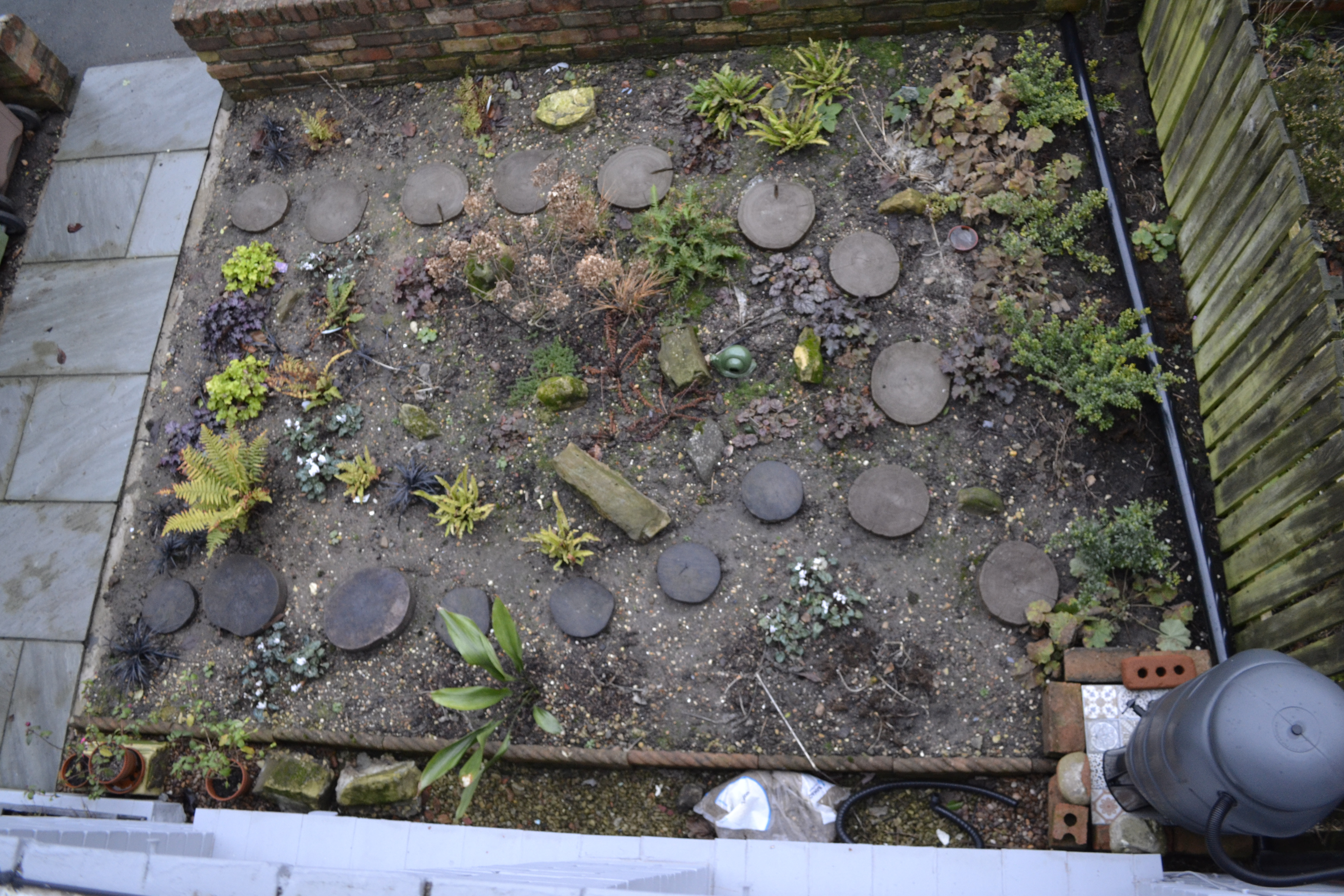 I have a job to do over the holidays adding some ground base grids under the bins and then gravel fills the gaps. This will make a more solid base for the bins to sit on. The materials have been sat there since the last holiday. So, so long as the ground isn’t too solid I’ll hopefully get this done. There are some lords and ladies growing underneath the bins currently. This has attractive foliage but poisonous berries. It spreads rapidly by seed. I’m in two minds about digging it up to remove or to place somewhere else. 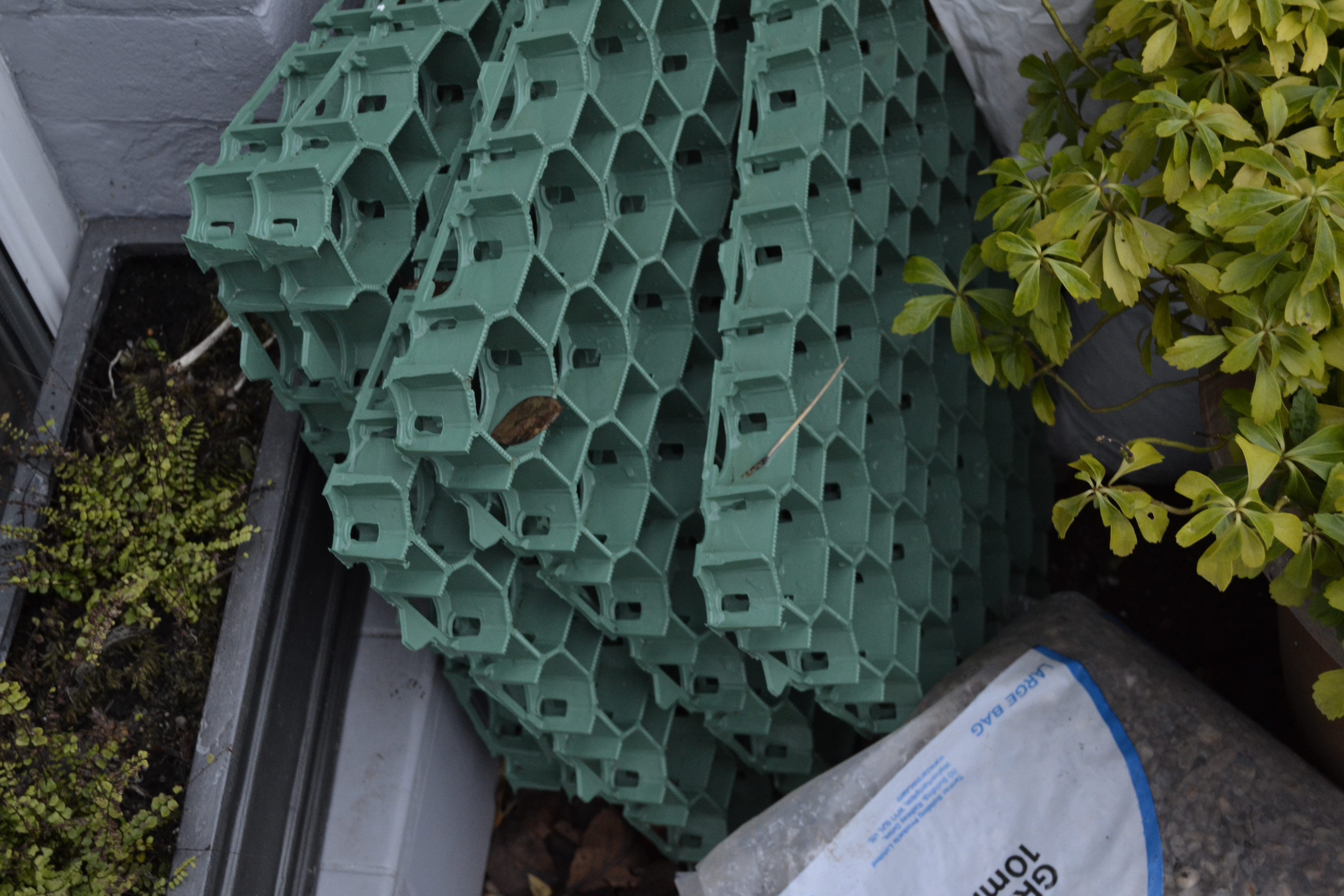 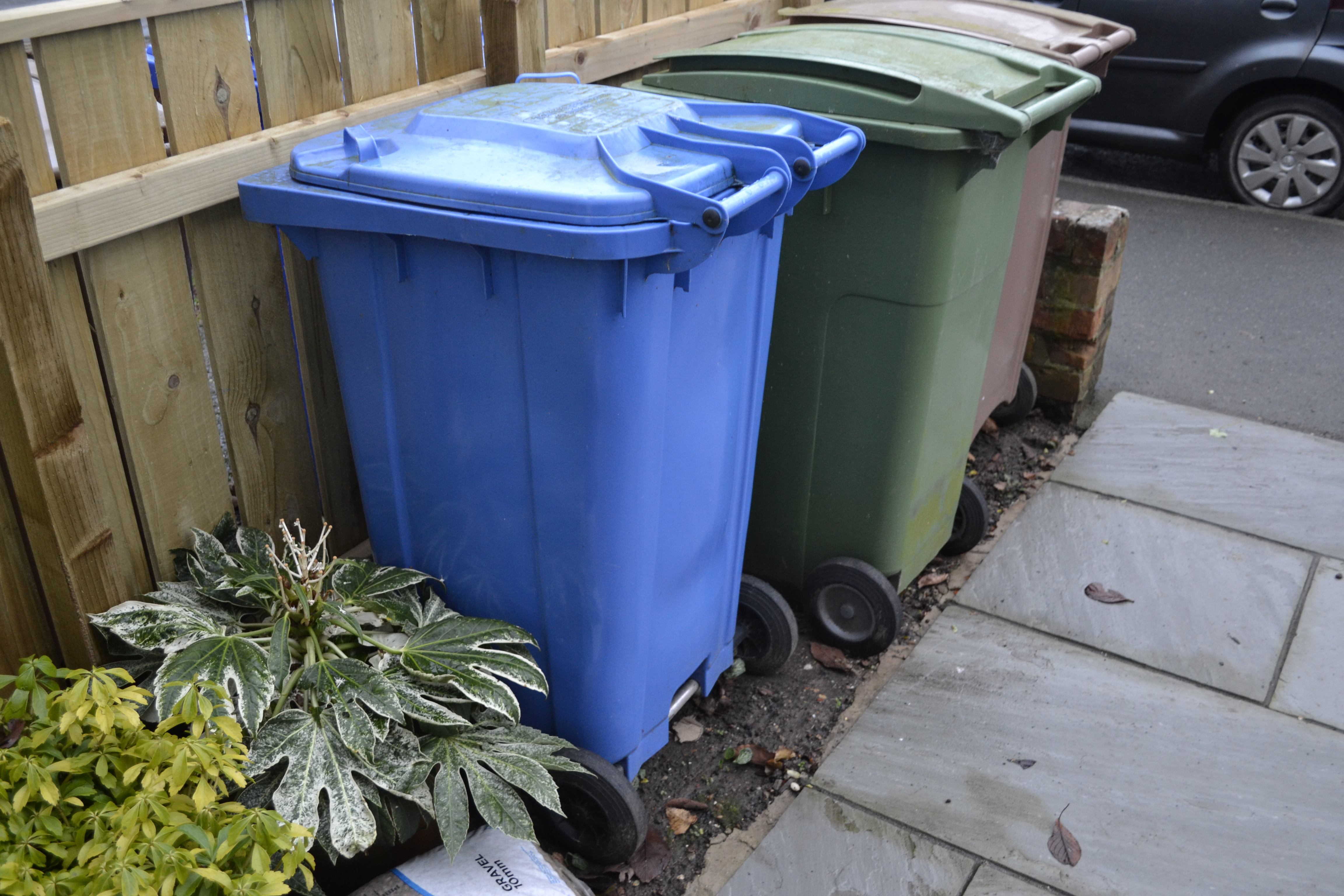 The cyclamen are looking good still. I got a few cheap trays from Tescos a few months back and they’ve added some nice winter flowers. Hopefully, they’ll self-seed. I forget which types are hardier so don’t know if they’ll return next year. 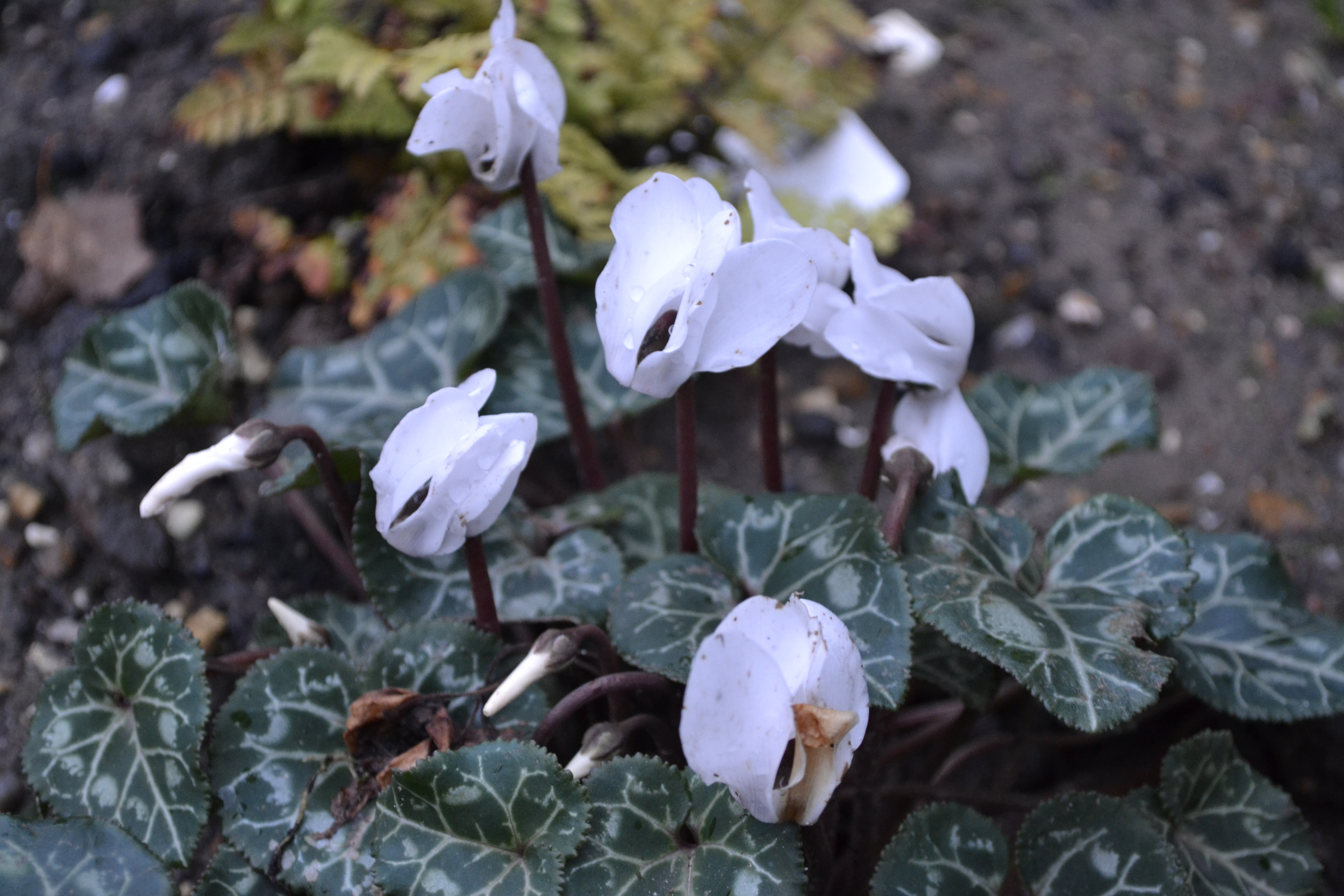 These boxes were intended as window boxes but they are too small so they ended up either side of the door. The hostas have died down now but Asplenium trichomanes are still on the go. I planted some white crocus in for spring as well. Hopefully, keep something on the go through the year. I’ve added a few Katherine Gold Irises for good measure. These were a purchase Alice made a few months back when I gave her the choice of whichever bulbs she wanted but I haven’t really had anywhere for them so they are getting rammed into these. Just poking its way in at the front of the photo are a few fuschia that are still holding on. I doubt those last few buds will open currently. 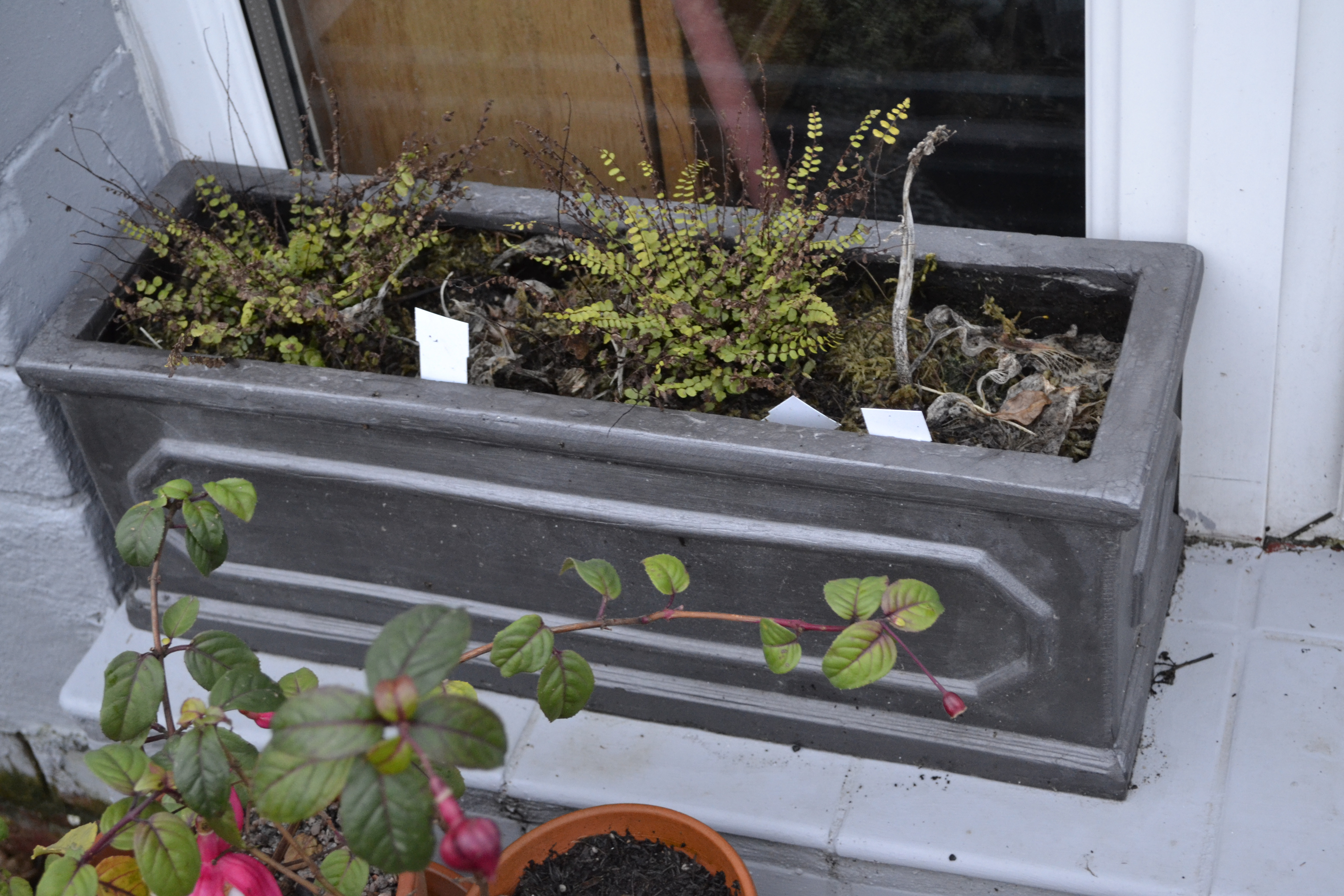 The heuchera have largely stayed looking good. The lime marmalade and forever purple combination is still one of the finest pairings of heuchera in the garden. The bright green combined with the veined leaves looks grand. 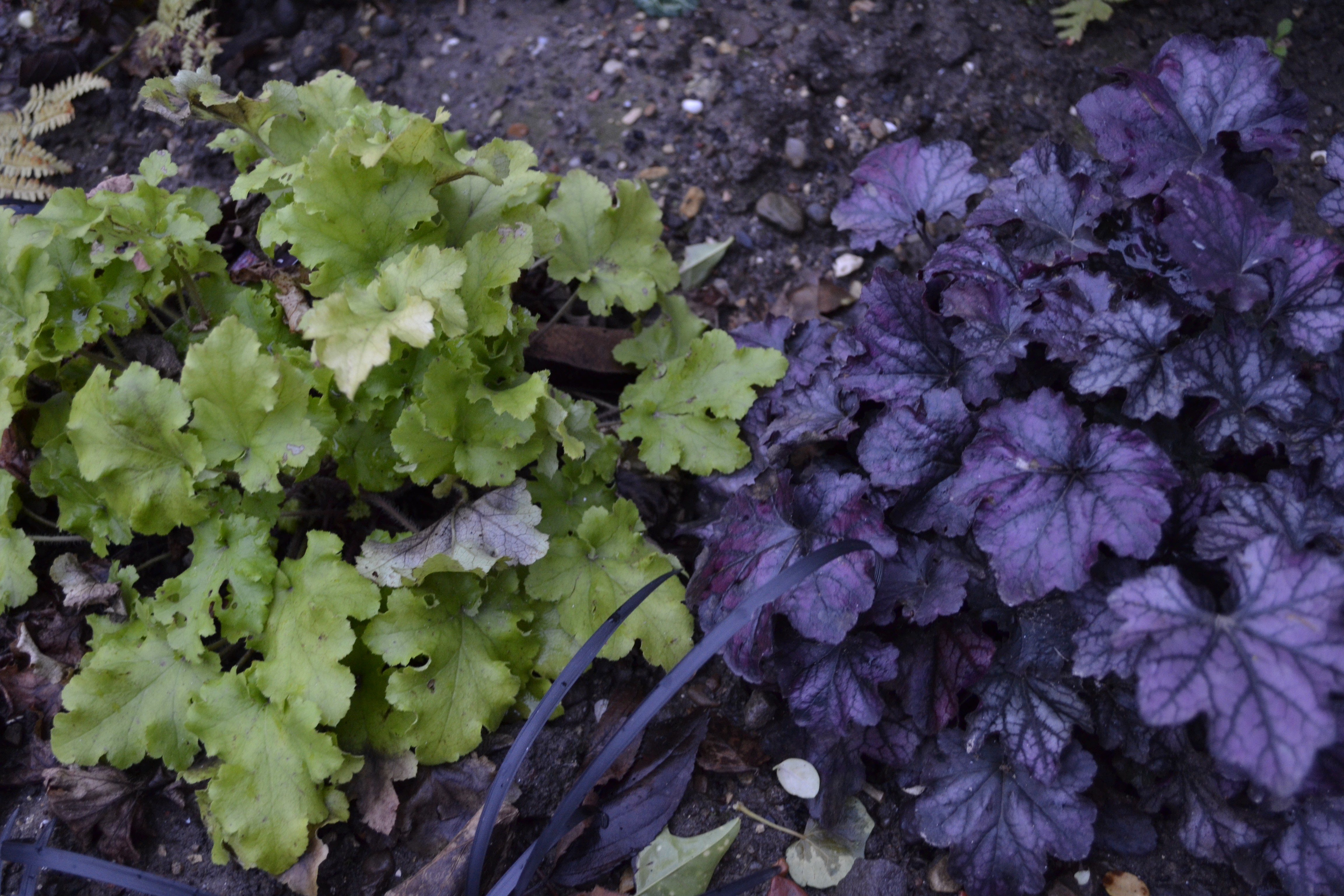 A few of the other varieties are looking a bit downcast by the wet weather but hopefully, they’ll pick up again. I’m going to have to look at taking cuttings next year to increase stock as they are quite pricey to fill decent sized areas. The moss is establishing well on the rocks. I’d be happy for it to continue spreading onto the ground to form a good mat. 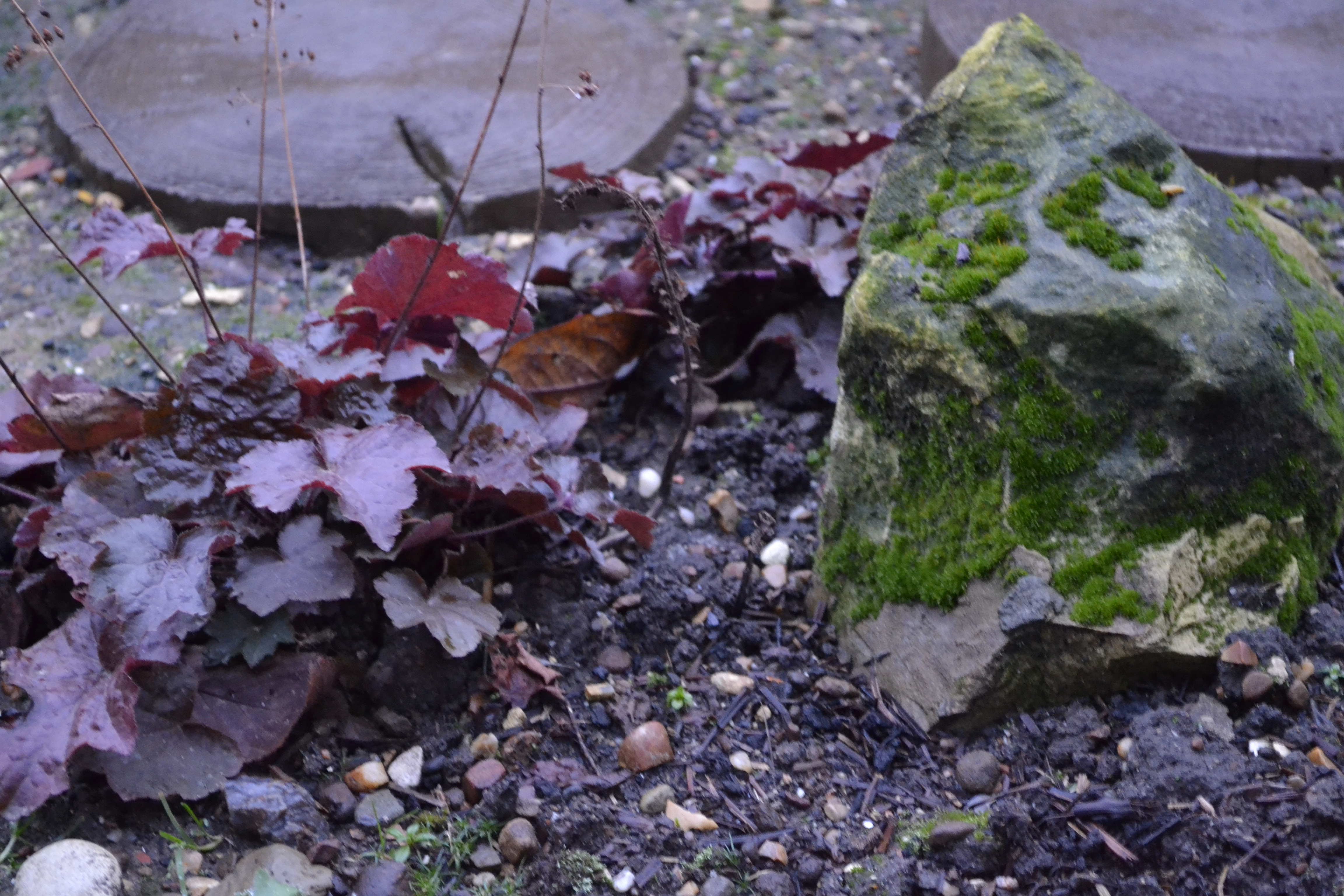 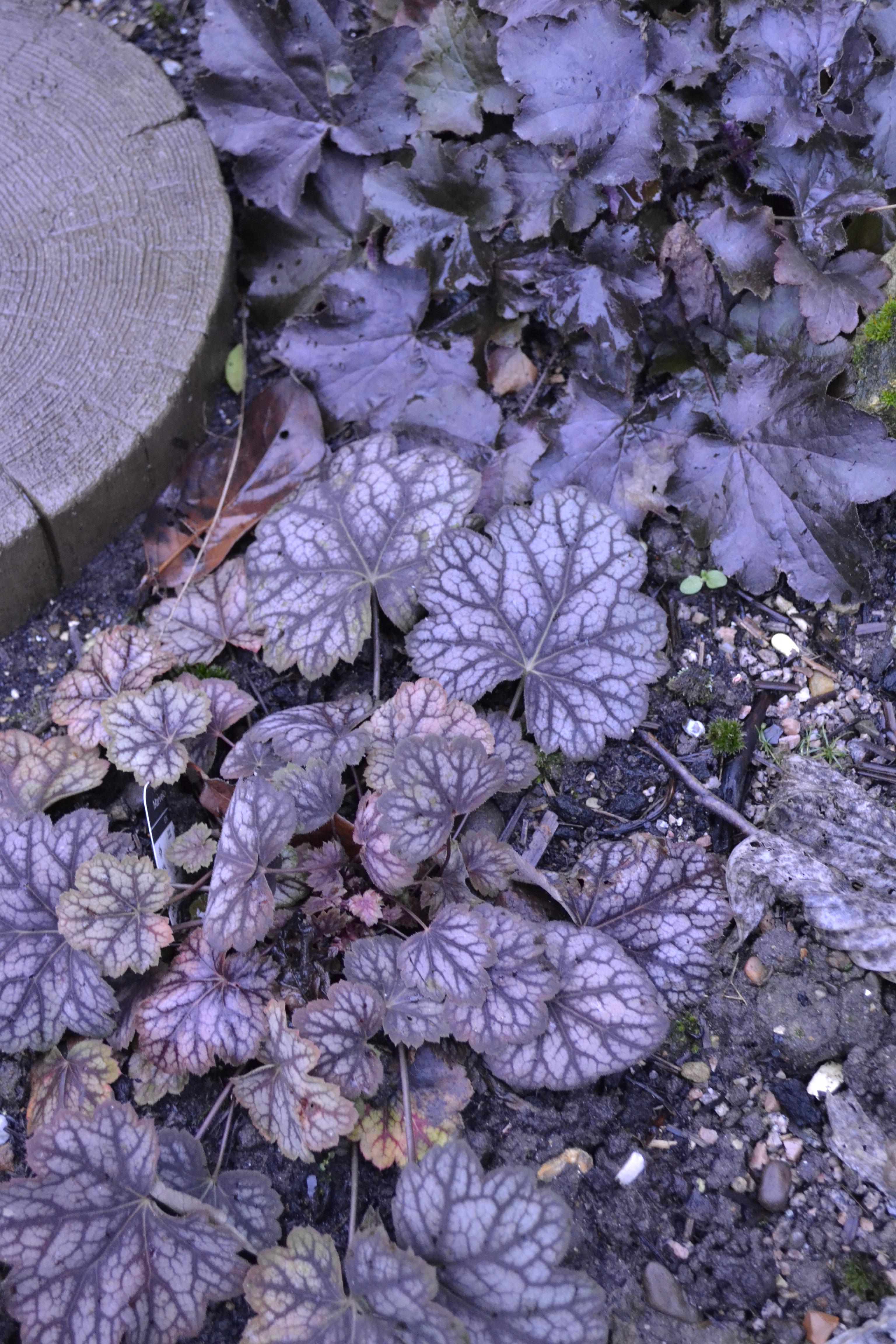 I’ve gone for filling gaps with mass crocus planting. I went with all white Joan of Arc from Gee-Tee bulbs. I was good about getting the bulbs into the lawn in the back garden but only just got these in. I am leaving it a bit late but hopefully, they’ll just come up a bit later. I’ve already planted some wild garlic, Allium Ursinum. Accounts differ of this spreading and running rampant, but as it is contained to the front garden with nowhere else it can self-seed easily I should be able to remove if I decide I’ve made a mistake. My theory is the scent of the garlic will drive the slugs away but I have little hopes of this actually working. There are lots of the deciduous ferns and hostas are shrivelled up now, so the crocus will have a chance to flower before these comeback. 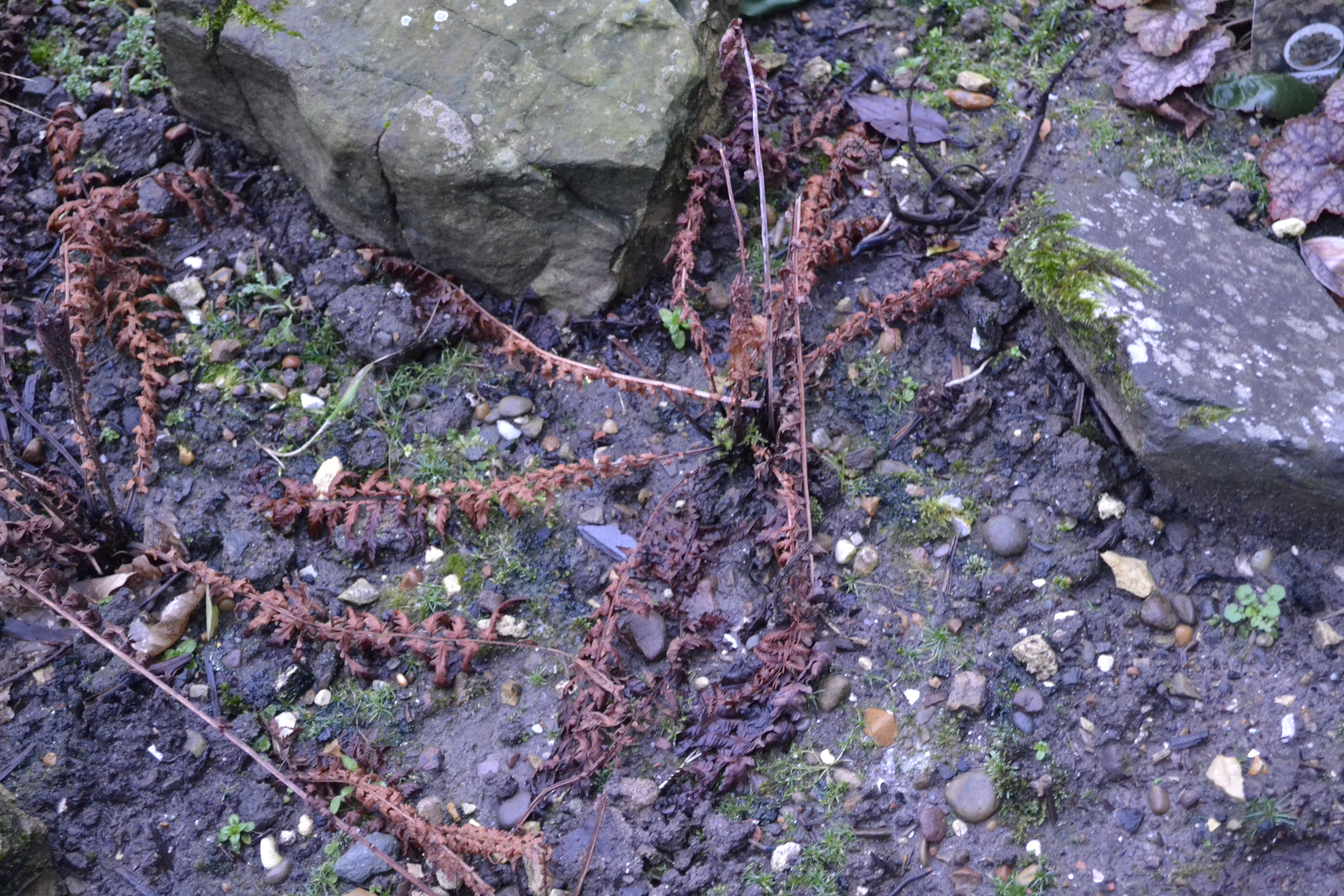 We’ve seen lots of people stopping to check out my progress on the front garden even at this time of year when it’s looking a bit sparse. Hopefully, by next year the evergreens will have filled out nicely so there is still a lot of foliage through winter. We had a full day of rain yesterday so don’t think I’ll be doing many jobs today, but I’m off for Christmas now so hopefully get on with the remaining jobs.