Having removed the white beam to replace with a holly tree this has left this border feeling a bit crowded. I’d planted the holly about a metre away from where the white beam was. It’s had a knock-on effect of making the surrounding plants feel a bit untidy so I’ve been slowly working over the last few weeks on redistributing the plants to make this border feel more cohesive.

Here we have the holly planted in place. The white beam is still leant against the fence until I have time to saw it up. Then it will be added to one of the woodpiles. 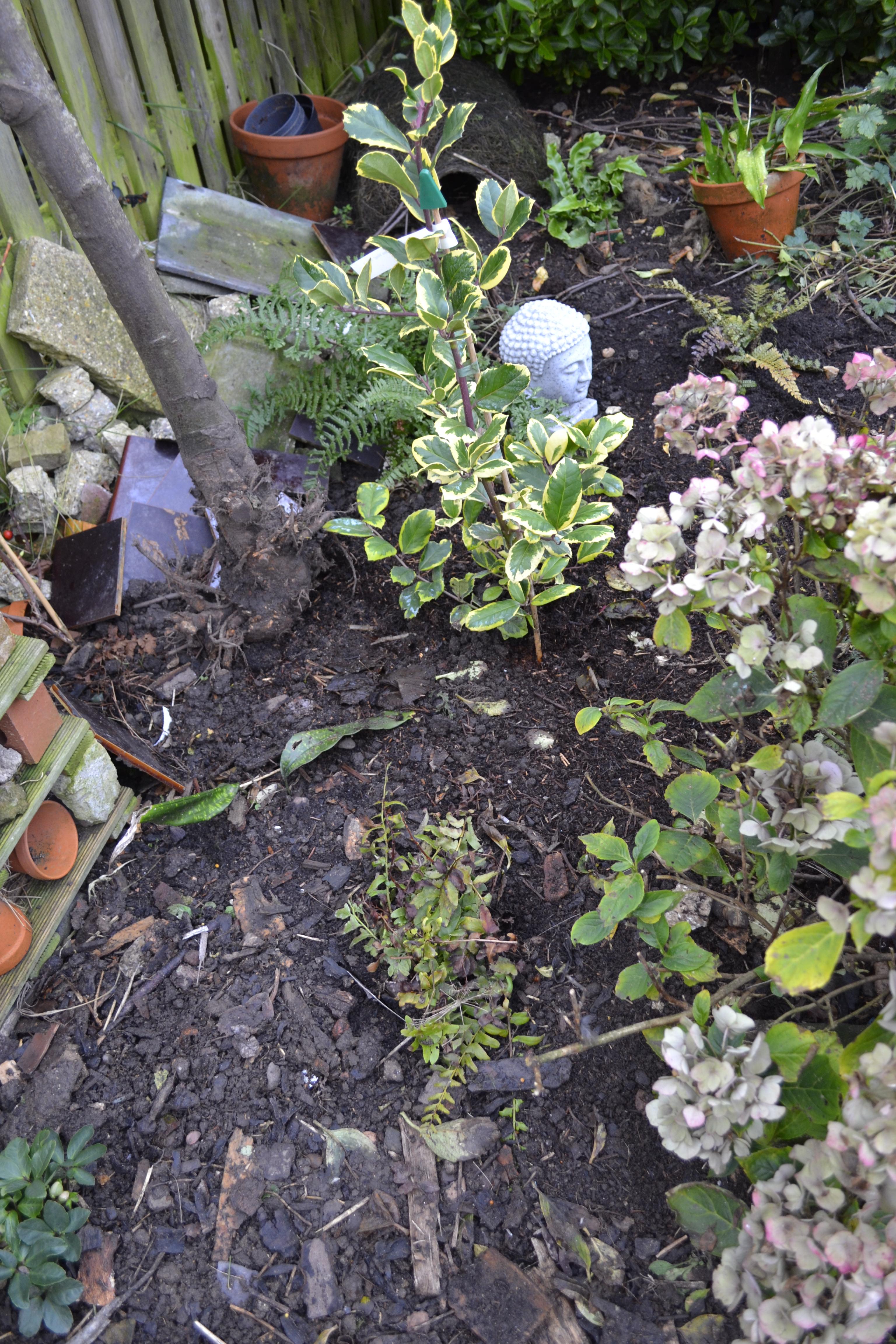 Here is the holly view from the path. The pink hydrangea in front of the holly seems to be a small variety. It came with the garden and hasn’t put on much growth, but that’s fine as it should work well there as the holly grows bigger. At the front of this section of the border are two large geraniums. They would spread and take over the world if I let them but I keep them to mounds of about a metre spread. I’ve given the area a bit of a mulch with some compost to put some goodness back into the soil now the tree has gone. The aim for this area is to fill with a number of shade-loving foliage plants to mirror the opposite border under a cherry tree. There is a climbing hydrangea you can just make out along the back planted earlier this year. They are slow to establish but it will eventually give nice glossy leaves and a burst of flowers. The opposite border has a well-established climbing hydrangea and it is stunning. All of this should start bringing the garden together into a cohesive whole. Starting out I made the mistake of planting too many single specimen plants and now I’m cutting back to limit my palette and have more repeated combinations. My love of foliage plants has been well documented and has proved effective in the front garden, so I’m bringing more of that to the back garden. 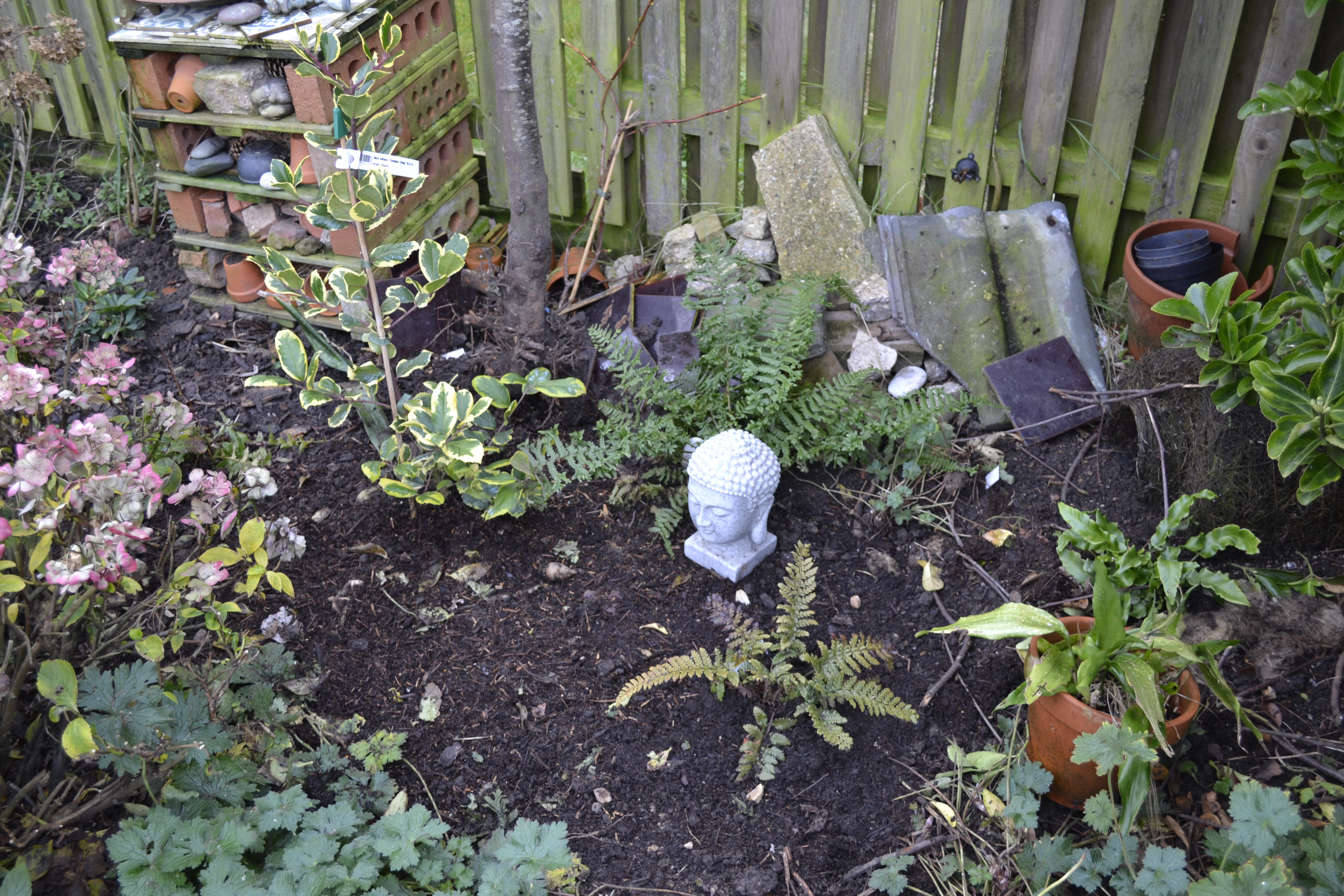 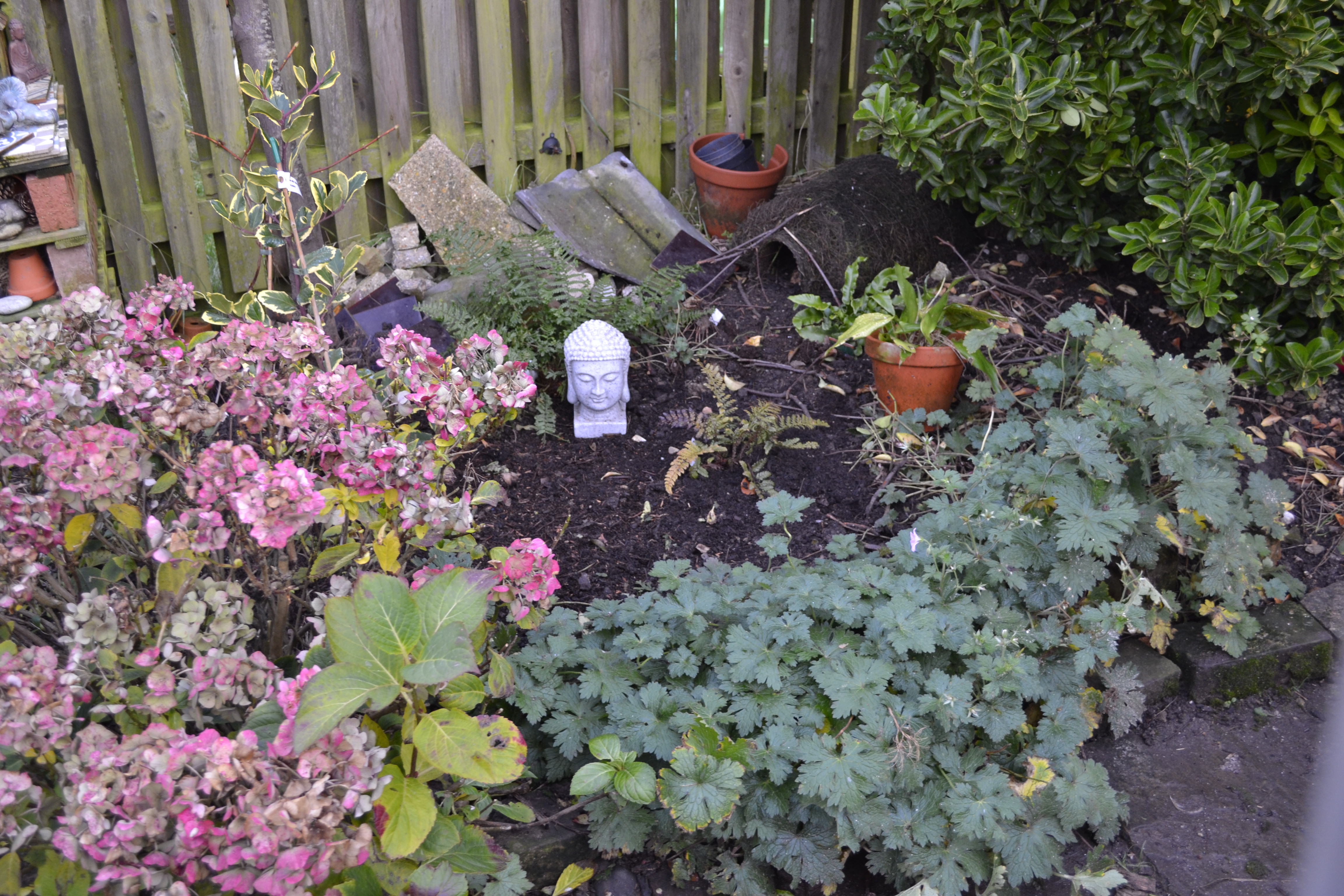 The Buddha’s head is a recent addition. It probably won’t stay there as I’d like it engulfed partly in foliage. The fern in front is a Japanese tassel fern. This was a reduced fern as it isn’t in the best state but as it was a variety I didn’t have. They form shuttlecocks of fronds. It is supposedly evergreen, so may serve the purpose of Matteuccia for the whole year. Not in the best state right now but should recover. 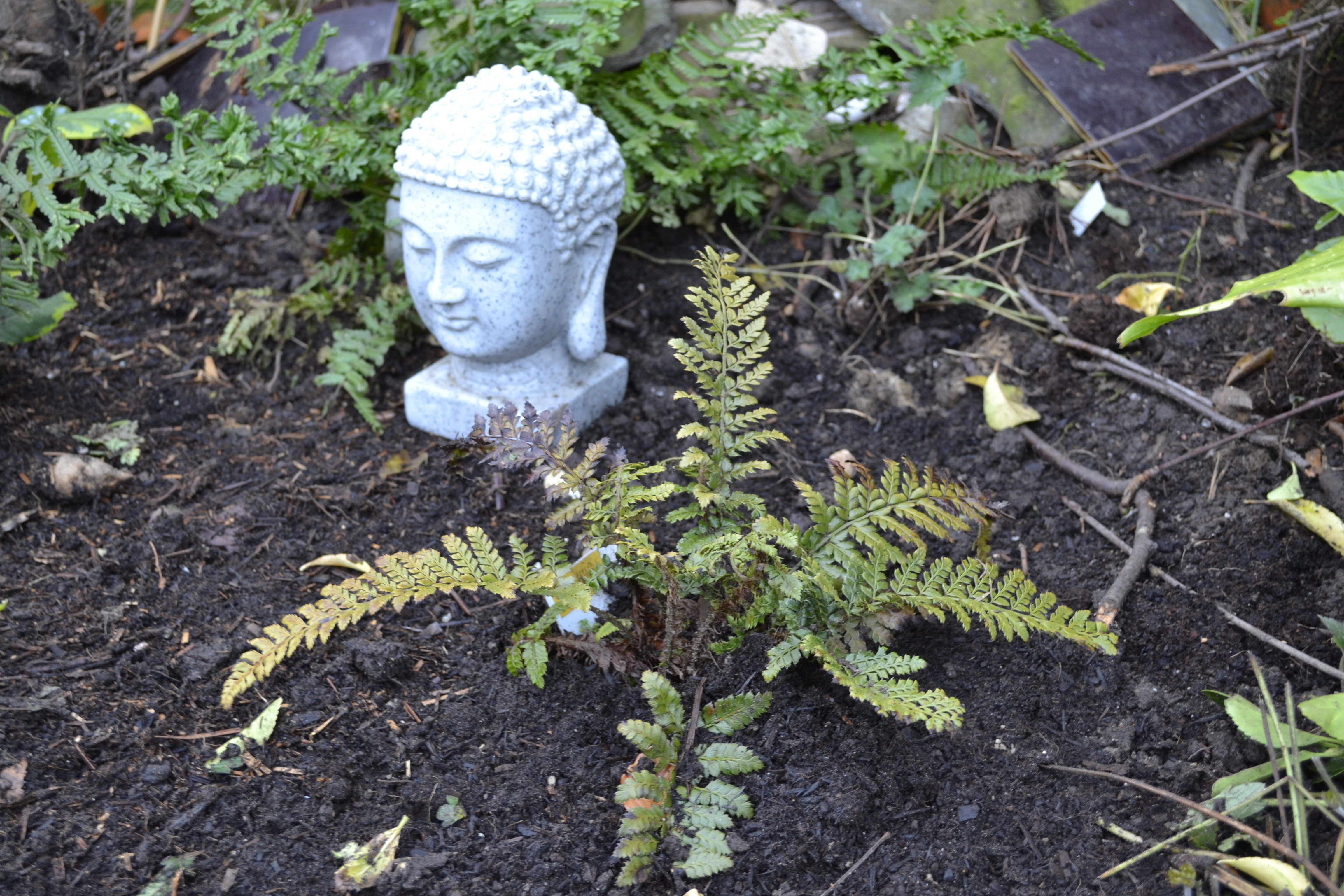 The addition of the holly has made the hydrangea paniculata limelight look a bit squashed so this has been dug up and moved along about a metre along to the other side of the bug hotel. It should have enough space here to fill out better. 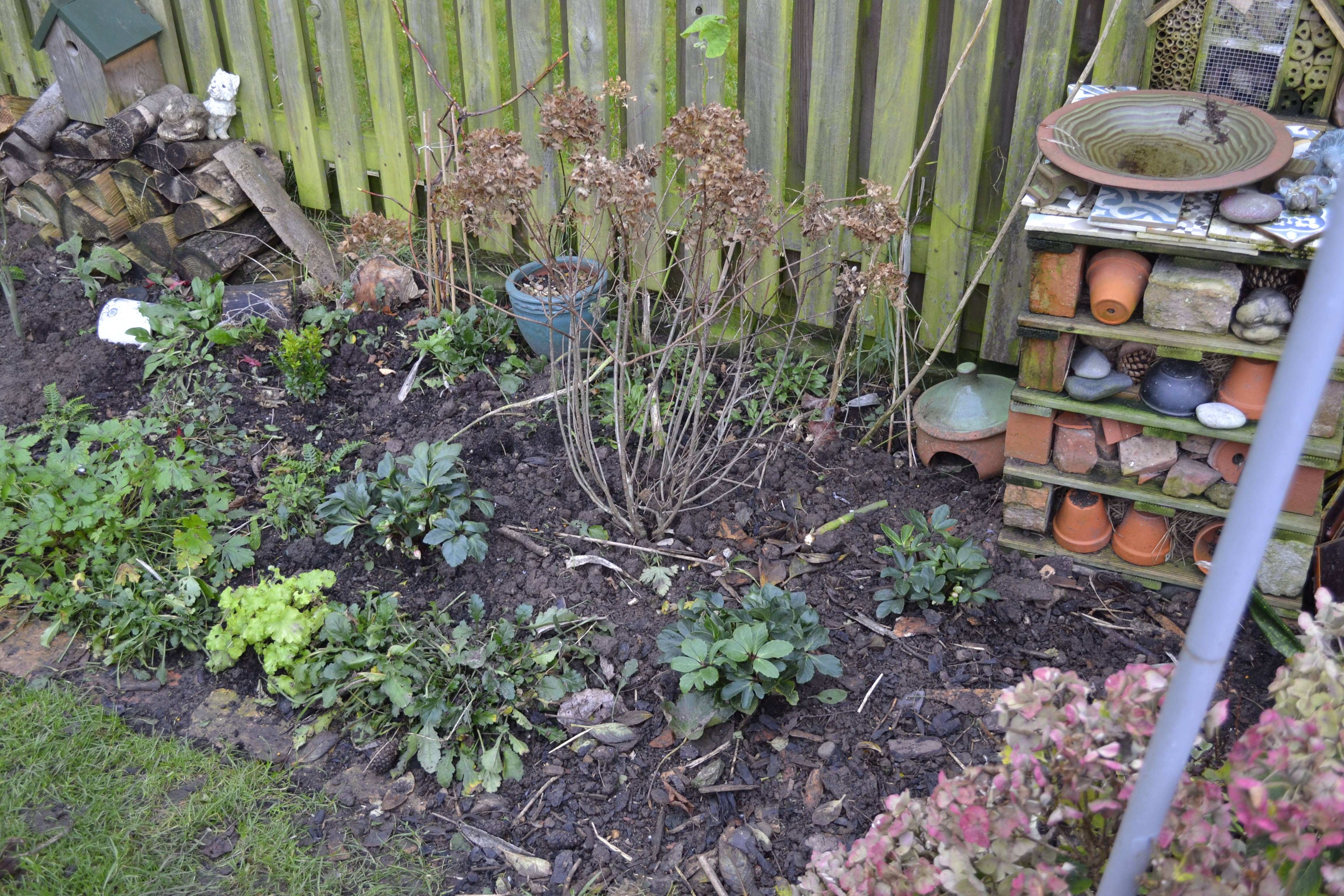 Surrounding it there are a couple of cheap hellebores and heuchera. The straggly leaves at the front are ox-eye daisies. These self-seed all over and I redistribute them to gaps in spring. To the side of the hellebore is a Blechnum fern. This should grow to about 40cm creating another evergreen block of foliage over the next few years. 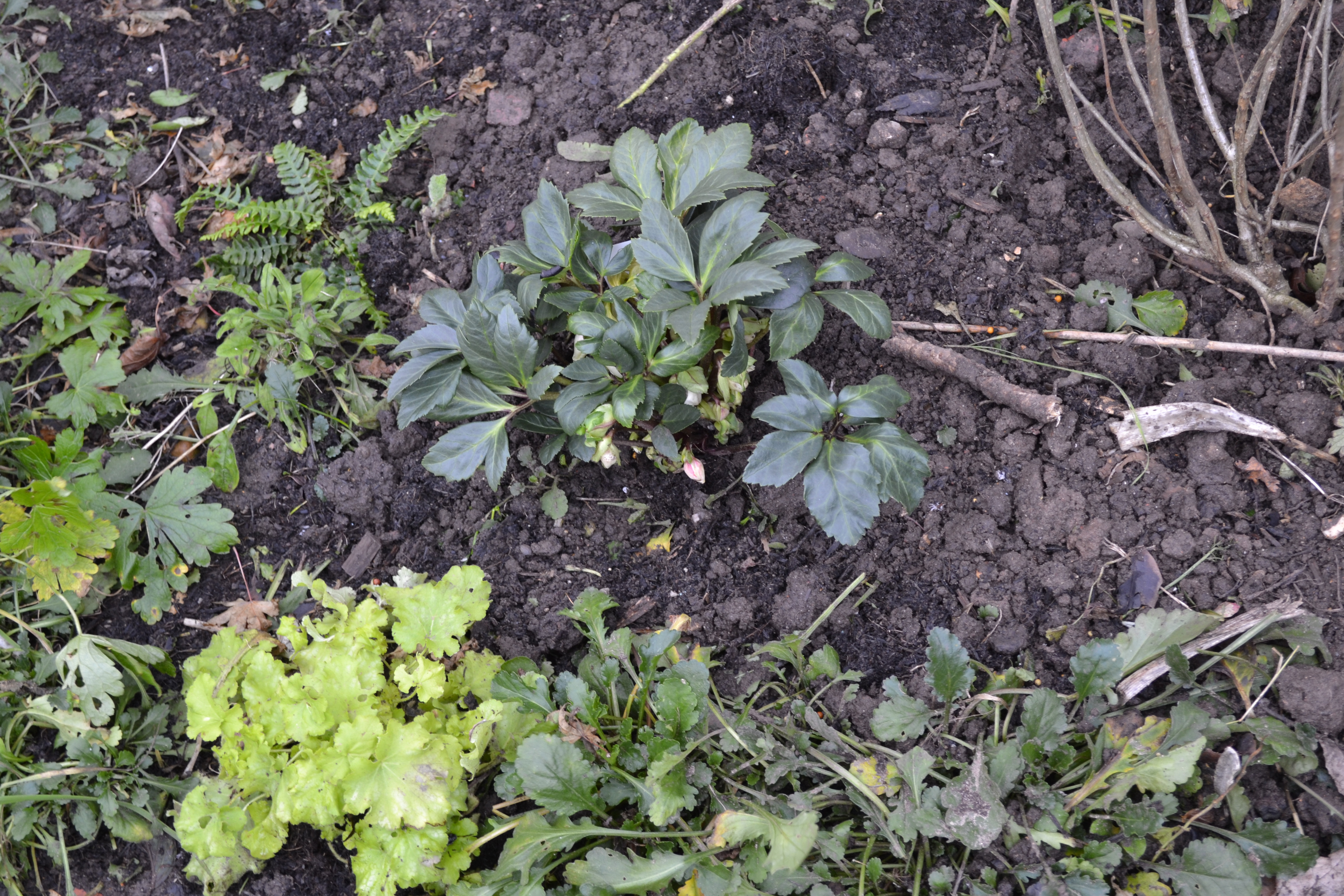 In between the limelight and holly I’ve planted another discount fern, a Christmas fern. This is named because it should stay looking good till Christmas. As you can see it isn’t in the best state but like the tassel fern it should recover. It should fill out to be an undemanding patch of ground cover. This is a US native making my fern collection a truly international affair. 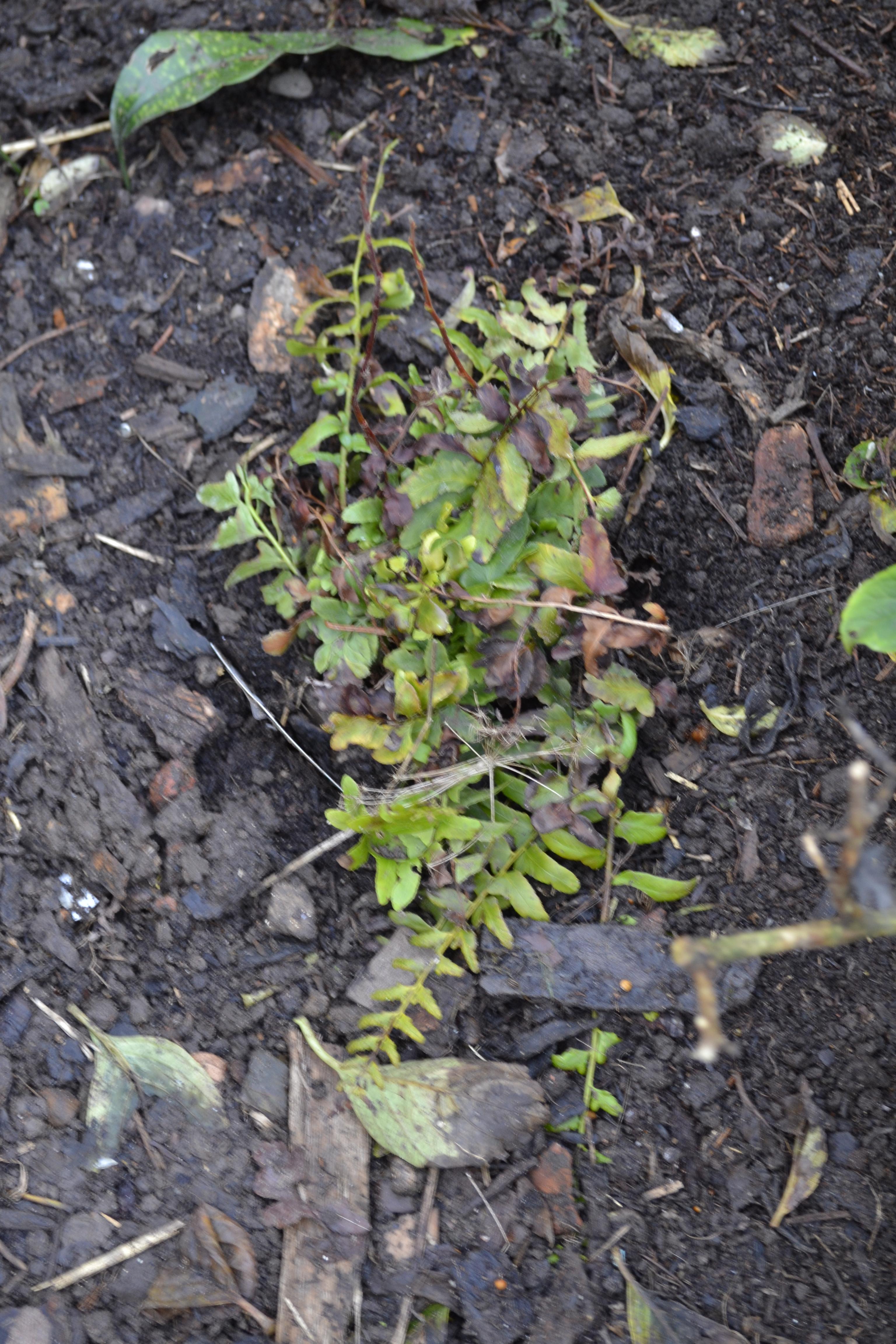 Moving the hydrangea limelight along had a knock-on effect of needing to move the Acer Palmatum ‘going green’. This has gone along about a metre from where it was, leaving about 2 metres between the Acer and hydrangea. In between is a currently tiny Buxus plant that I plan to allow to form a small ball to keep some structure through the year as this section of the border has ended up bare each winter. There are a few more of the Blechnum ferns dotted around that that will spread and give a nice bit of foliage cover around the Acer. In the top right corner is a second climbing hydrangea planted this year. It’s put on a bit of growth this year and I reckon should claim the fence over the next two years. Right at the front of the border are two geranium x oxanianum. These are a short geranium with small pretty veined flowers. 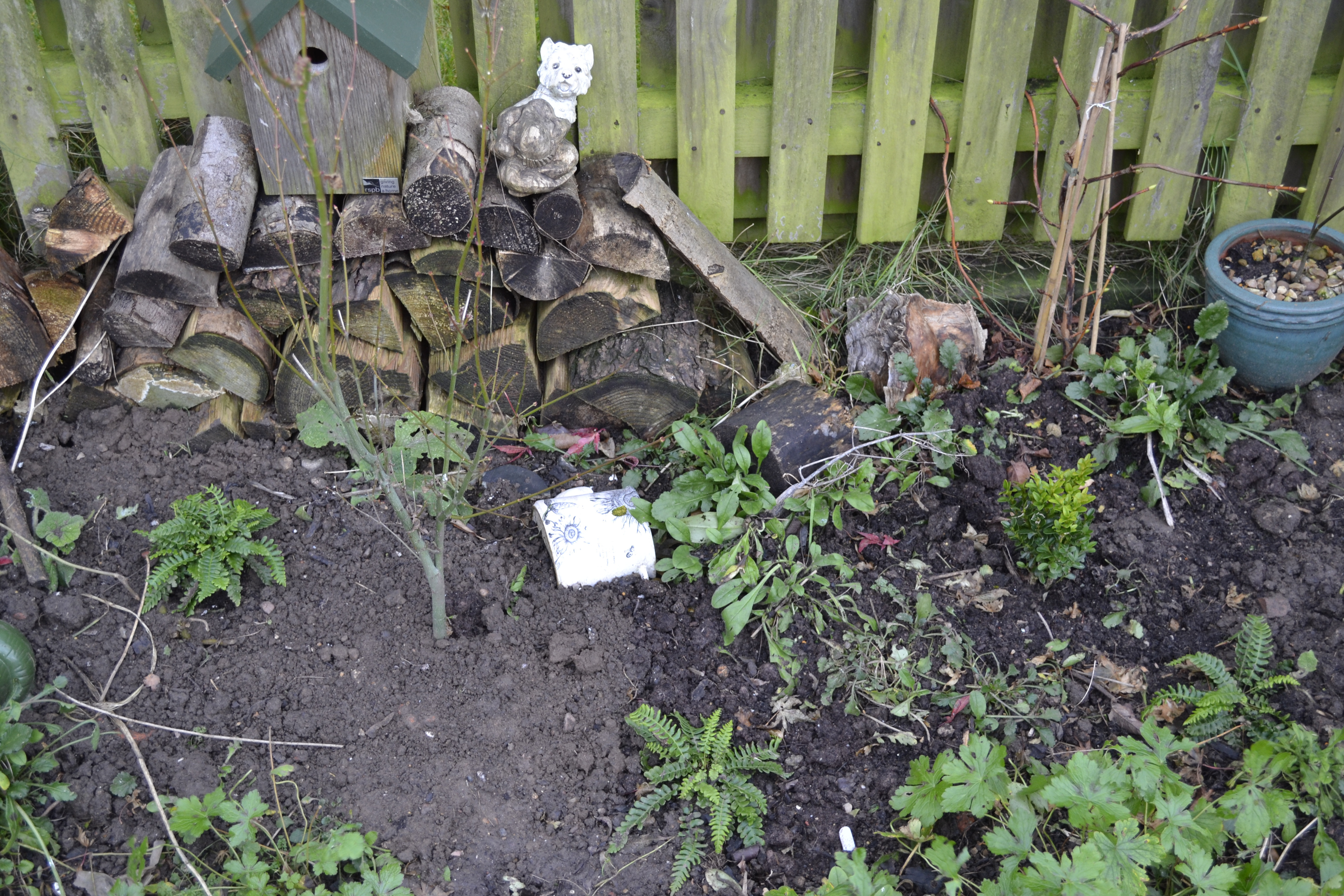 The Acer itself should thrive in spring providing bright green leaves. This year it has put on a bit of growth but not been exceptional. I’m unsure whether I have the right conditions for Acers, but I like them enough to persist. As the other shrubs and climbers establish it will gradually become more sheltered and hopefully, it will manage to tolerate my sea winds. The stems are bright green. These photos don’t really do them justice. The plant label tried to use this as a selling point as winter interest. Currently, though it’s too small for it too have any major impact. Hopefully, in a few years, it will fill out well. The log pile at the back is frequently visited by the neighbourhood frogs. The half-buried teapot providing another shelter. 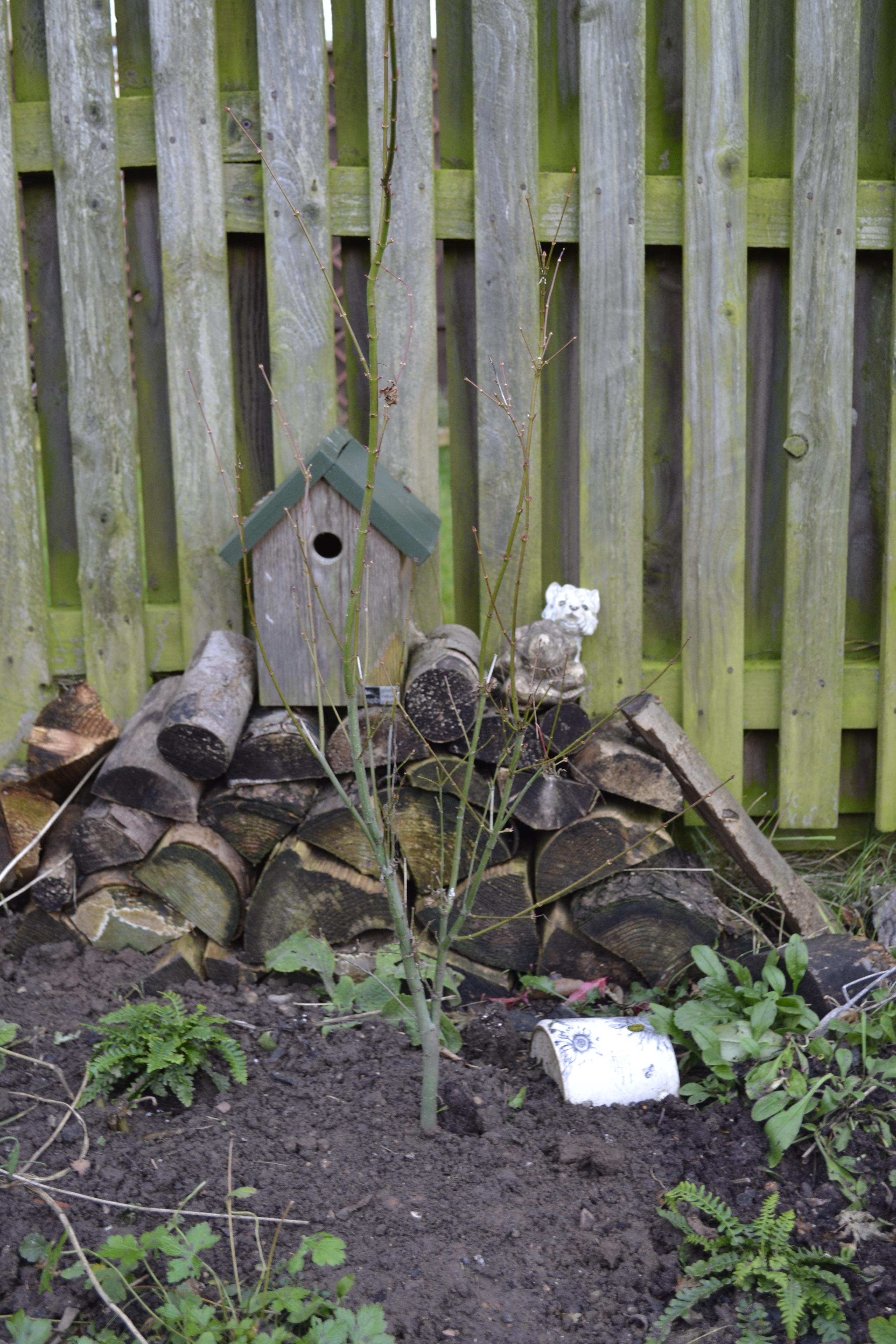 As I’ve been going along I’ve realised I have a few too many fine-leaved plants in this section and similar colours. So to add to the contrast and textures I’ve picked up two half-price hostas. Come winter garden centres want to get rid of hostas taking up space. They look like empty pots but will return in spring. These are very large pots and the plants look decent with roots out the bottom. Both are blue with quite large leaves. One is Hosta ‘Elegans’. This is a giant blue leaved variety. I’m thinking that this one can go to the back of the border. The other is Bressingham blue which grows slightly smaller. Blue varieties are generally more slug tolerant but only time will tell. 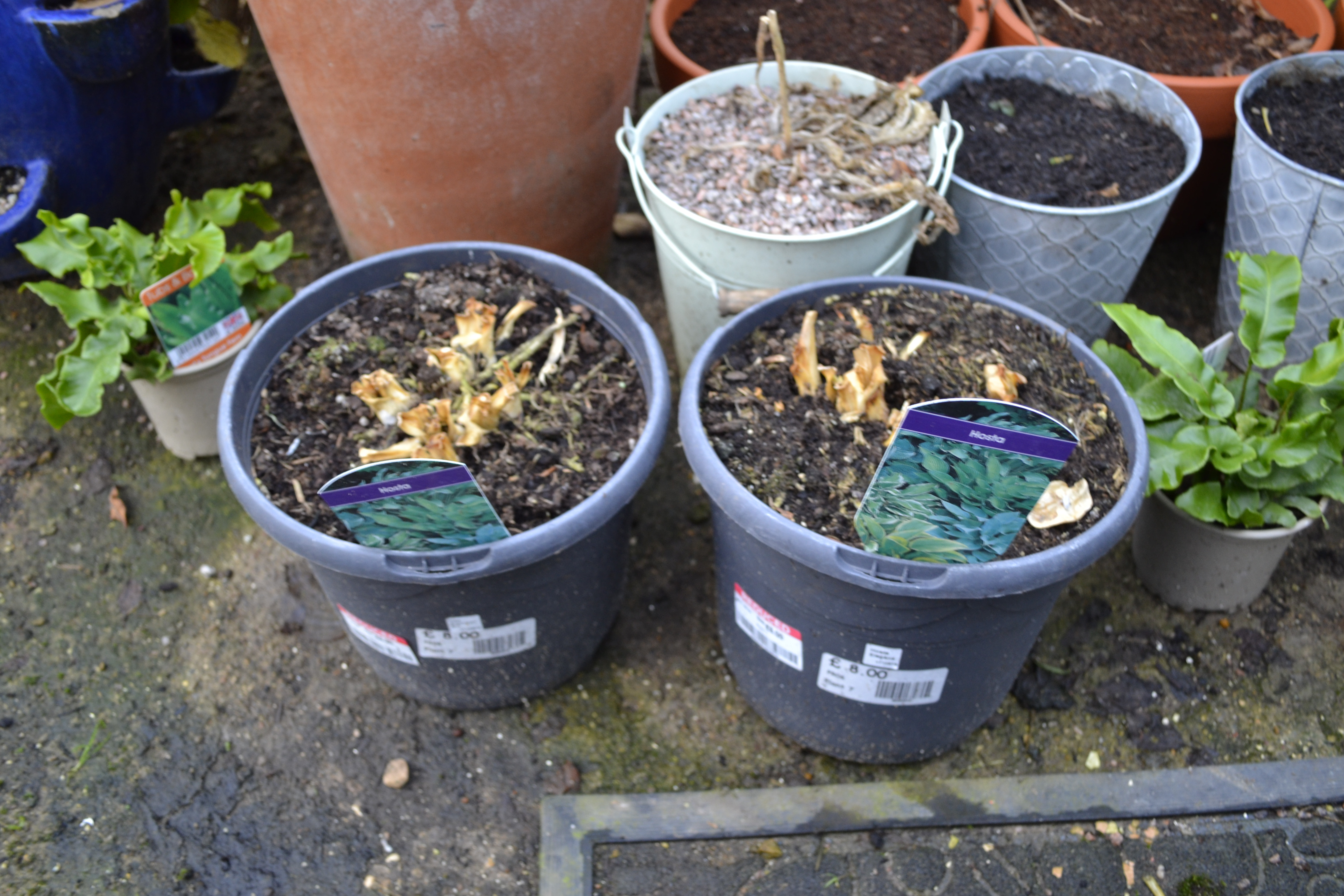 I’d also bought a pinus mugo mughus. This is a dwarf pine. My trips down to Dorset had given me an urge for a pine but I can’t fit a decent sized one. This is a slow-growing tough plant that will grow about a metre. I thought it would fit well with what has ended up being quite Japanese in nature. I have no intention of having something as carefully managed as a Japanese garden but I have got a lot of Asian plants in the mix. I’m not sure that I can fit it in the border though so I may look at placing it elsewhere or in a pot. 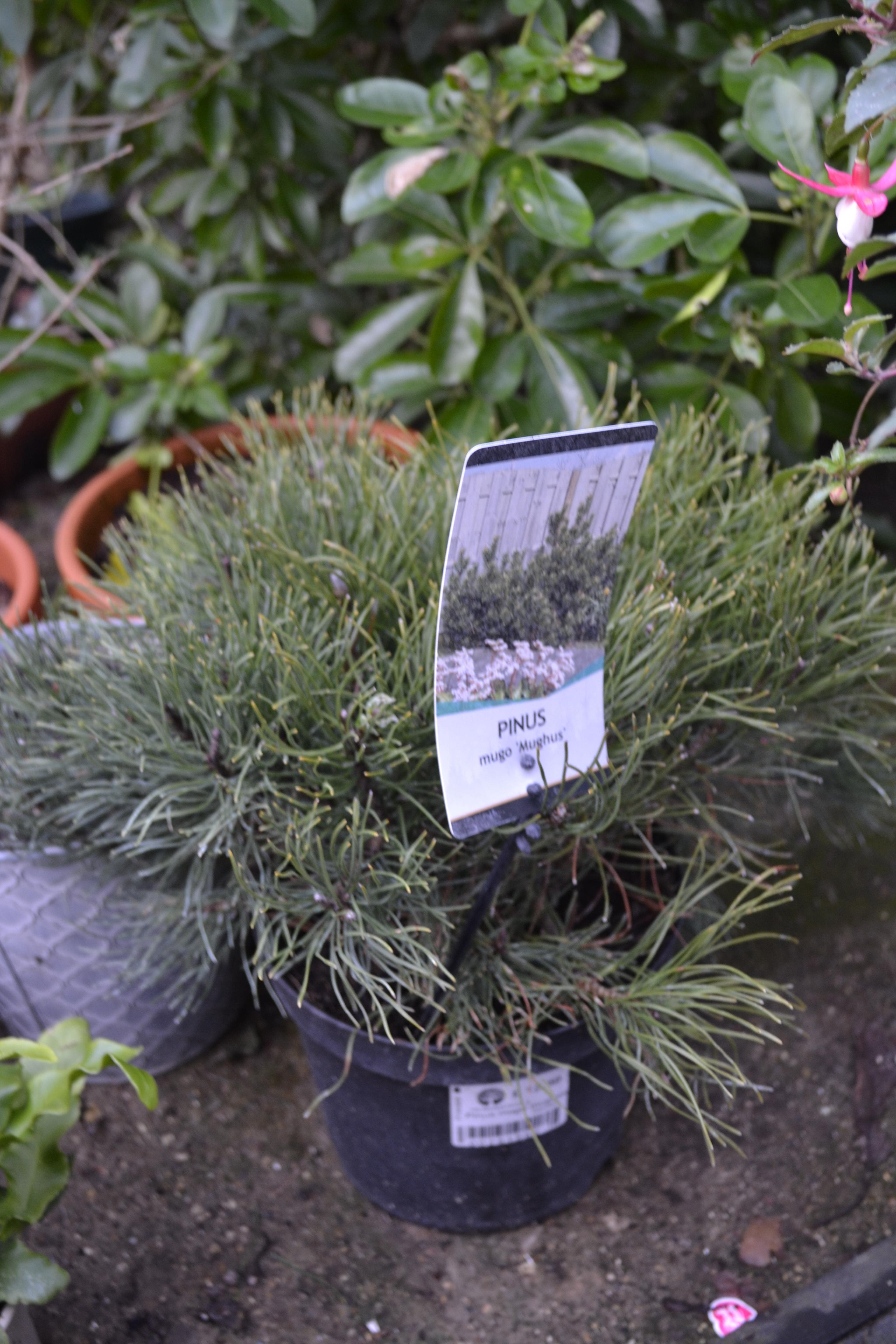 The overall look of this section of the border is a bit bare currently but give it a few years and the plants will fill out. Maybe half are evergreen so there should be more year-round colour. The Acer and hydrangea will establish over a few years whereas the holly will be many years to reach full maturity. But it should still look good even as a small shrub. It might not look that amazing right now but I like my blog to show a record of progress. 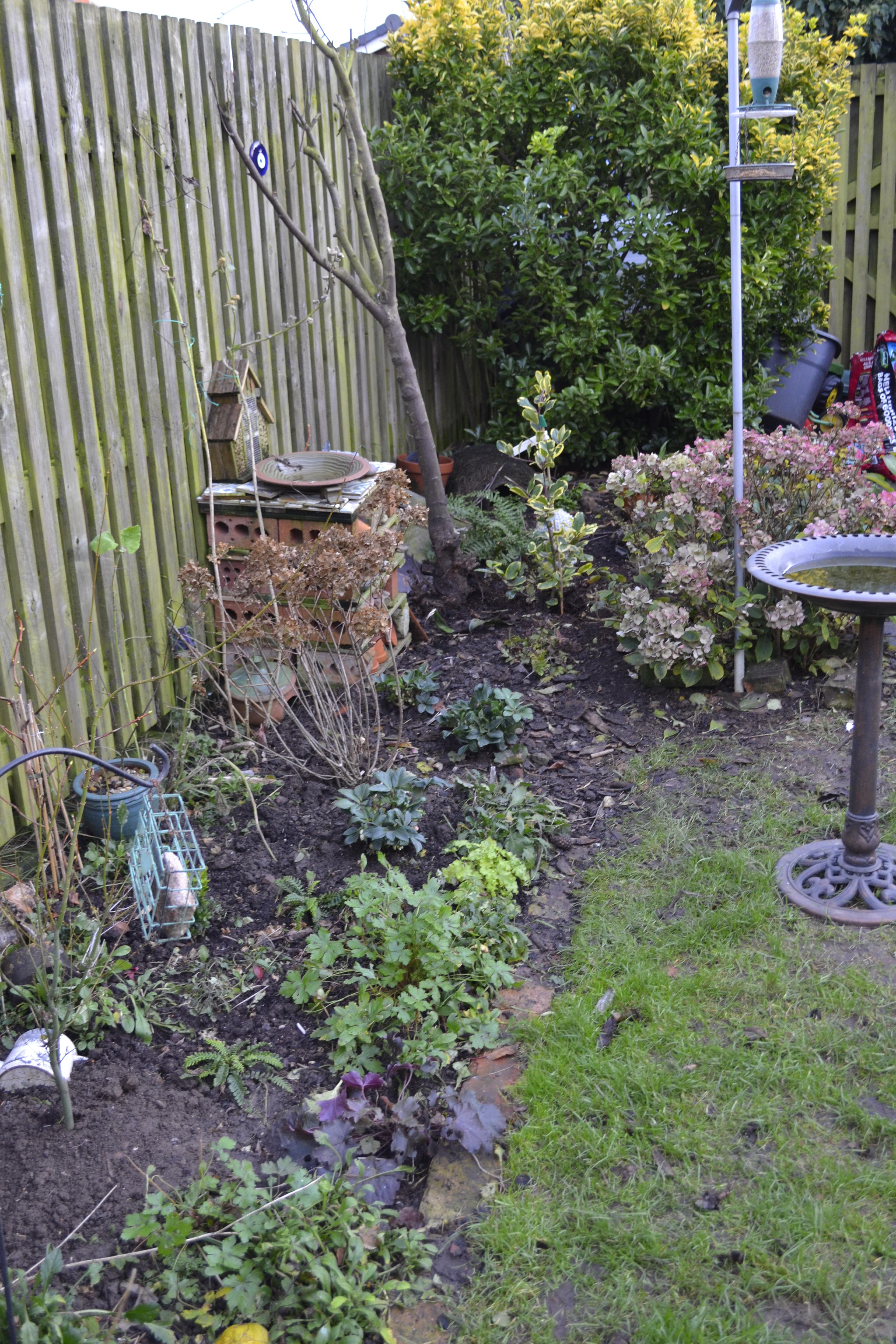 While I’ve done the heavy shifting Alice has filled the last two pots of tulips. Tulips have gone low down, then a few spare iris have gone higher up. The aim is for the iris to flower followed by the tulips coming through but we’ll see if this works. 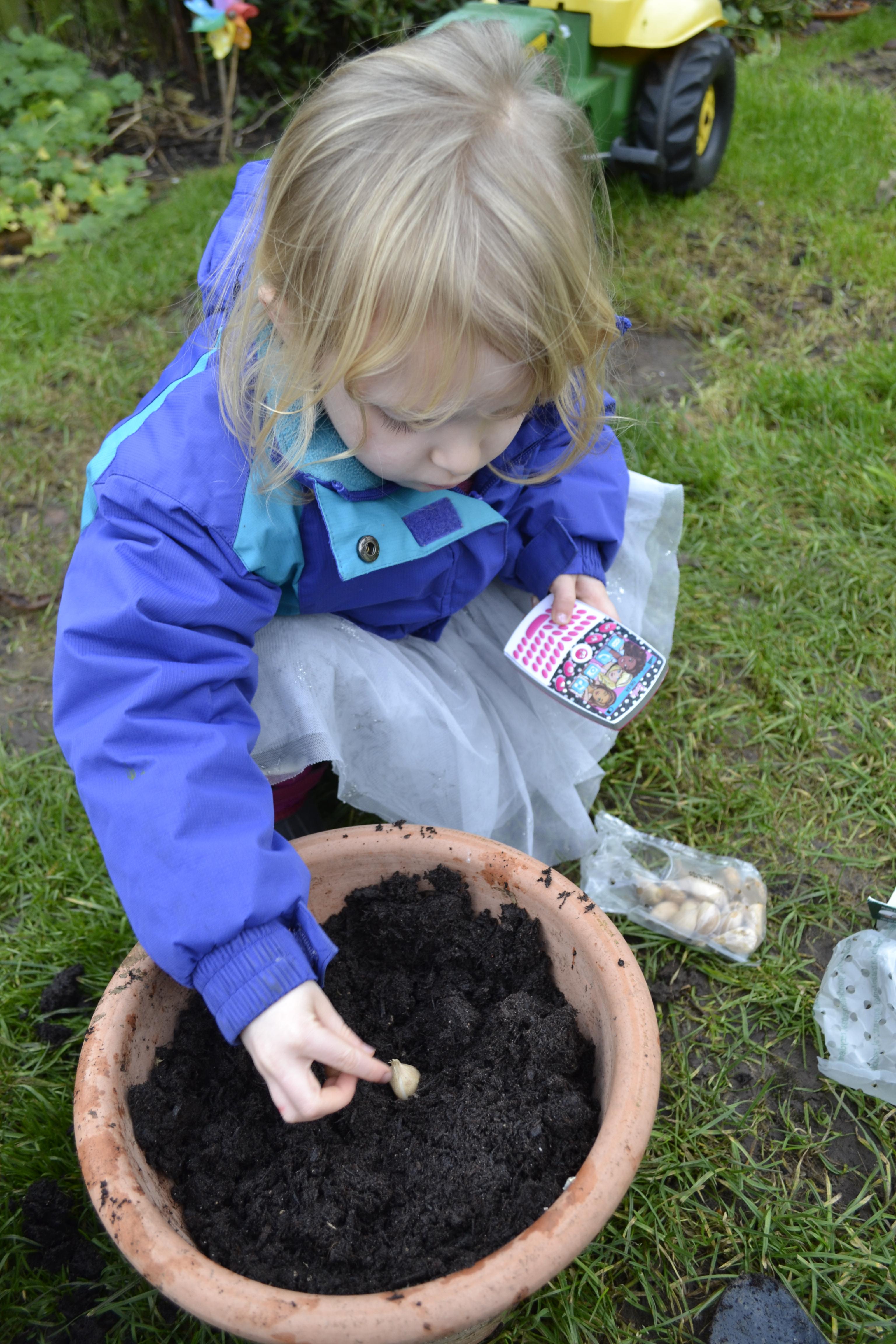 But she was keener to strike a poise than be helpful asking for photos in front of each plant. 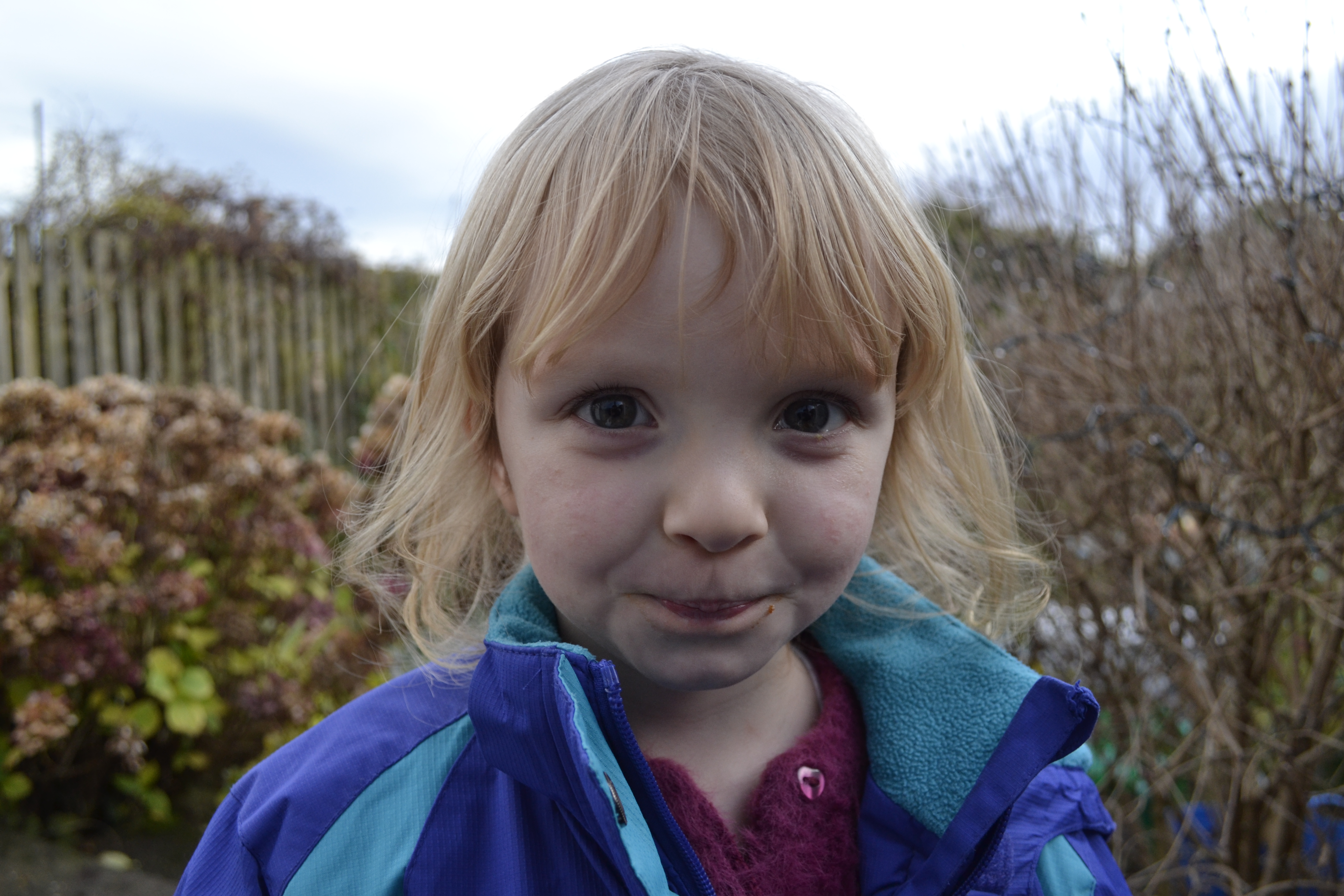 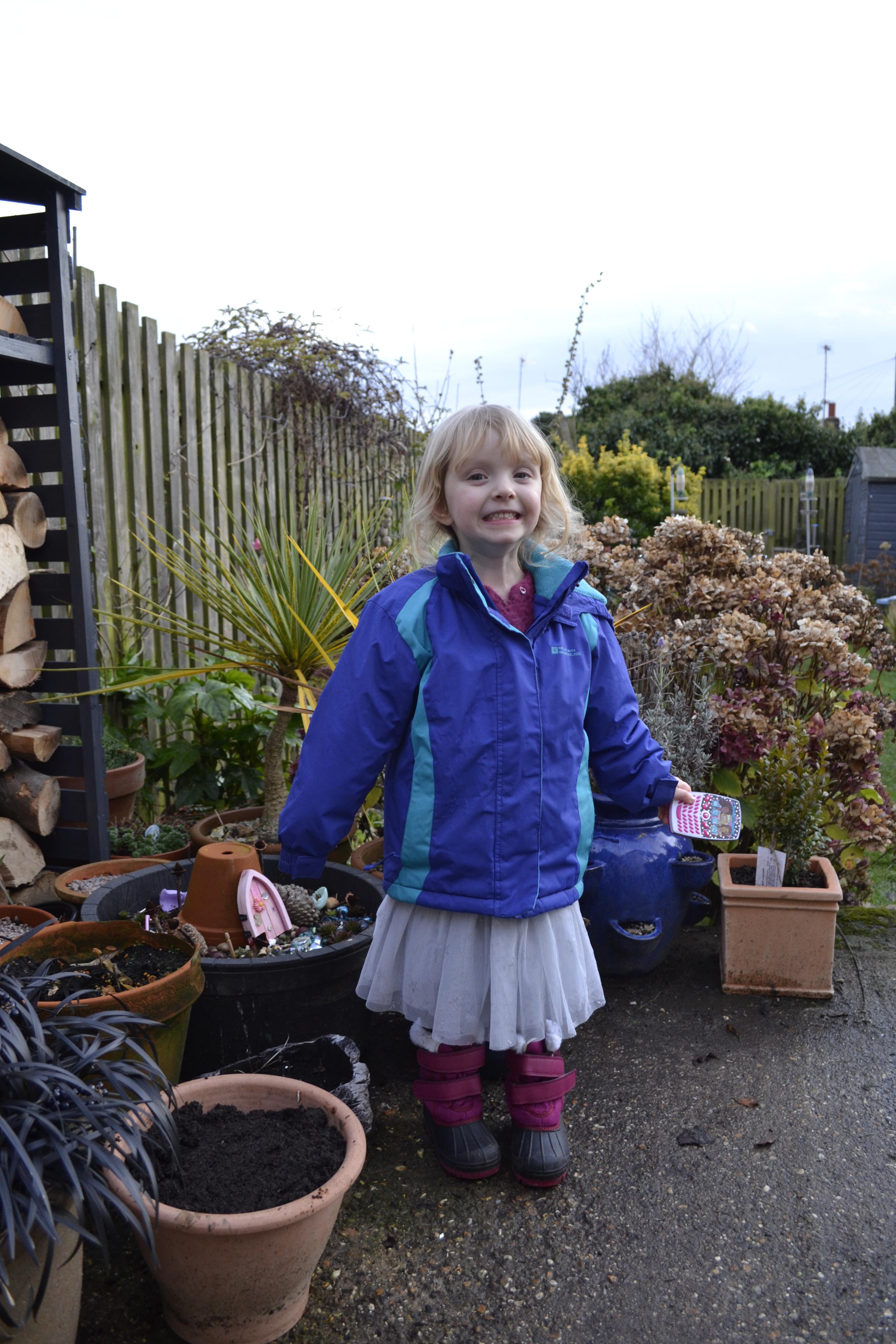 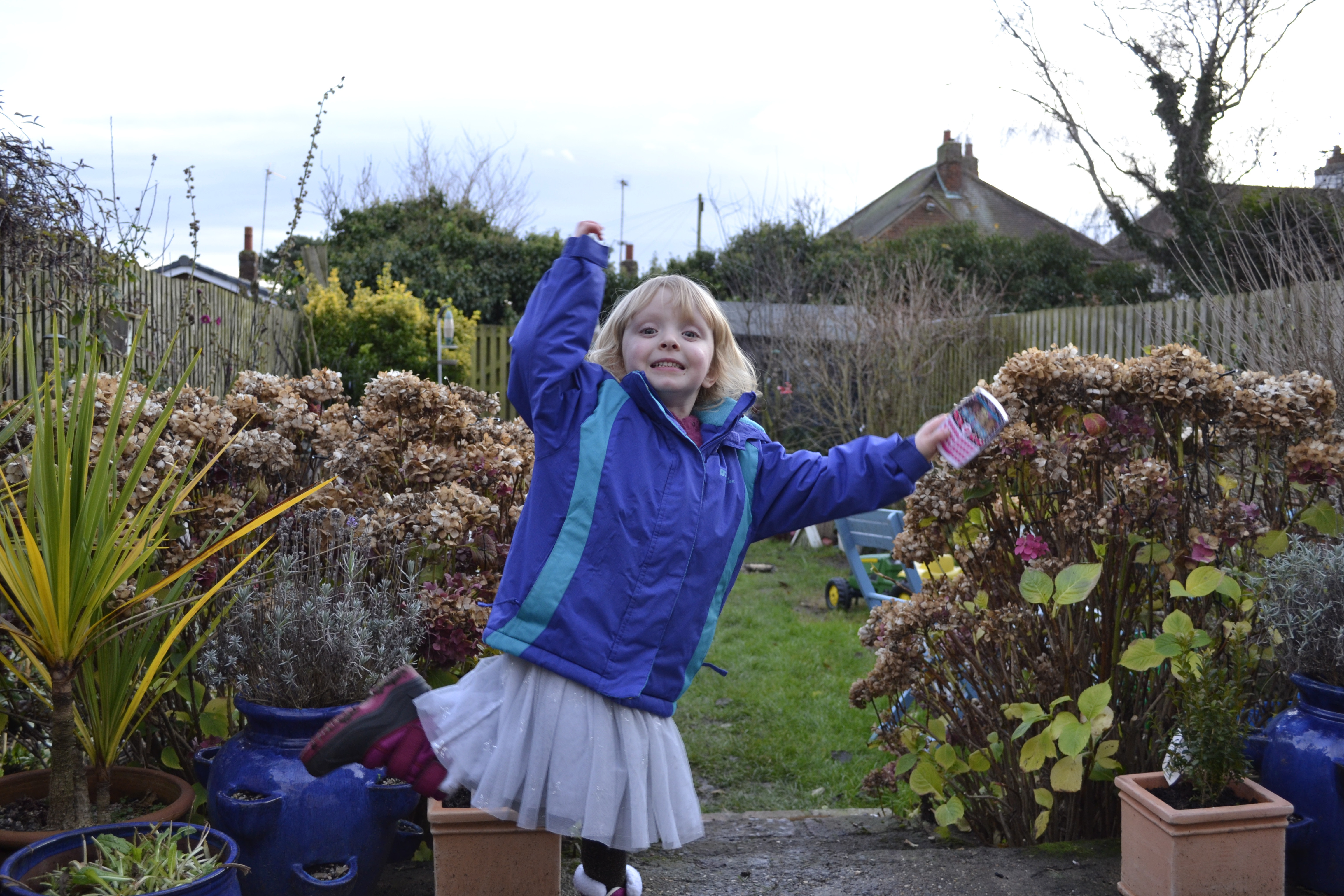 This section of the border has a lot of slow growers so it’s going to be a while before it really establishes but it’s good to have these blogs to look back on. I have an image in my head of how it will come together but I’m sure the reality won’t match my image. The planting should be fairly low maintenance and provide a decent home for a variety of wildlife. Now I just need the patience to wait for it to grow.