Having finished reading Foliage Plants I have moved onto a new release Wild about weeds: garden design with rebel plants by Jack Wallington. I preordered the book as having followed Jack’s Twitter and newspaper output I was interested to see what he’d have to say on the subject. Making use of wildflowers is very much on-trend currently. Any examination of flower shows over the last few years will show a wilder approach to our gardens in the fight to help support wildlife. People are more aware of the damages and benefits our gardens can provide. The book is beautifully produced in a lovely hardback edition.  I’m about half-way through the book and had lots of food for thought. If you still have anyone asking you for a Christmas recommendation you might want to suggest this. Through the book, I’ve found a handful of ‘weeds’ I’ve already grown and some I may try in future. So this week I thought I’d look at six weeds I’ve included within my own garden. 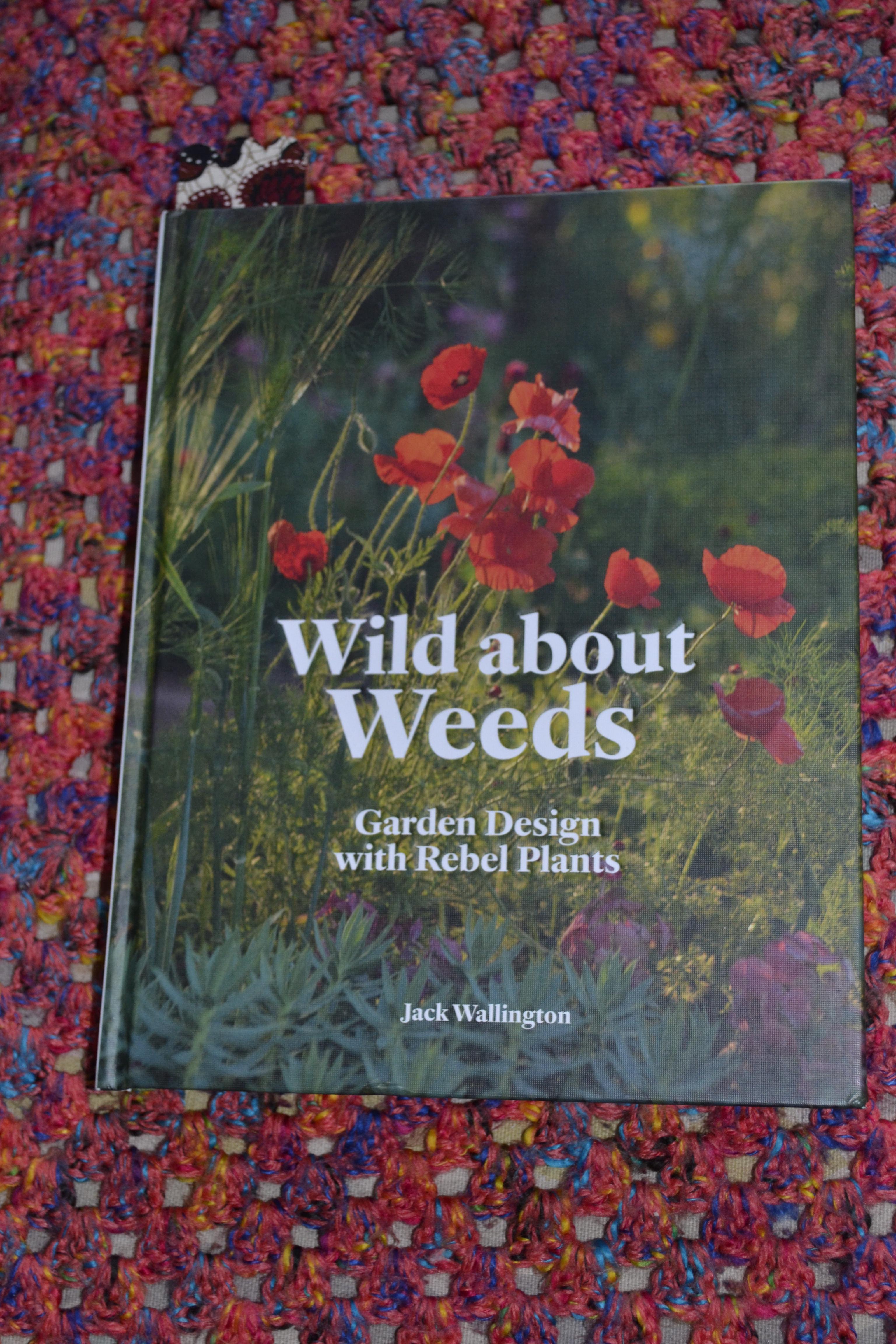 Teasel is a fabulous looking roadside plant. It grows tall spires of flowers. These are normally around two metres tall though in my garden it grew to about three. Every part of it is spikey, the flowers are spikey, the leaves are spikey and the stems are spikey. They are part of the reason why I appreciate my Gold Leaf Gloves. It was loved by many pollinators. The bees swarmed over it all summer and holly blue butterflies seemed to like it. It is a biennial so I currently have lots of little self-seeded plants coming up. I’m not sure I’ll allow it to establish again as the leaves are so big it takes up quite a lot of border space, but I did enjoy it for the year. In autumn the seed heads brought flocks of finches to the garden. If I had more space I would grow it again. 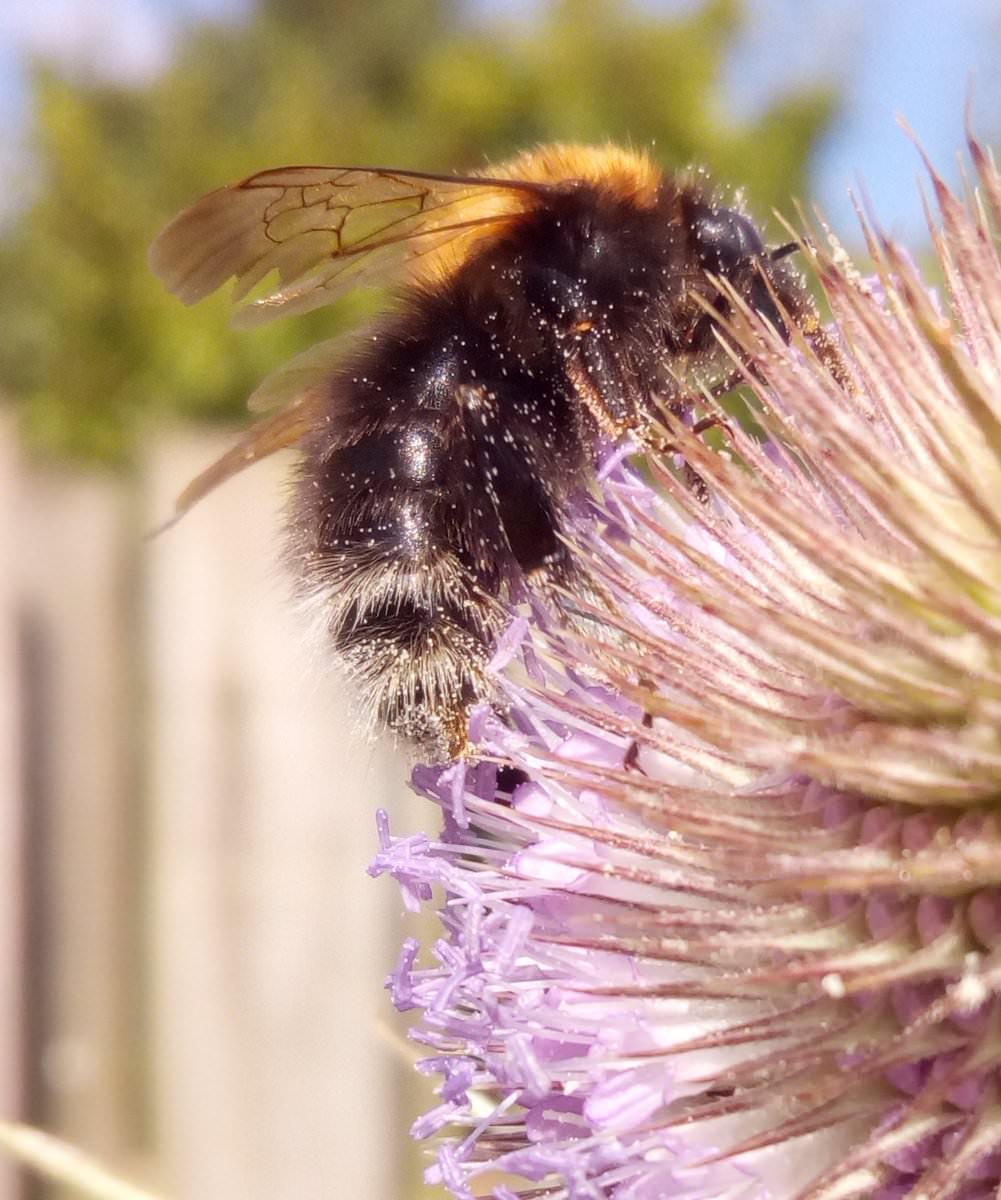 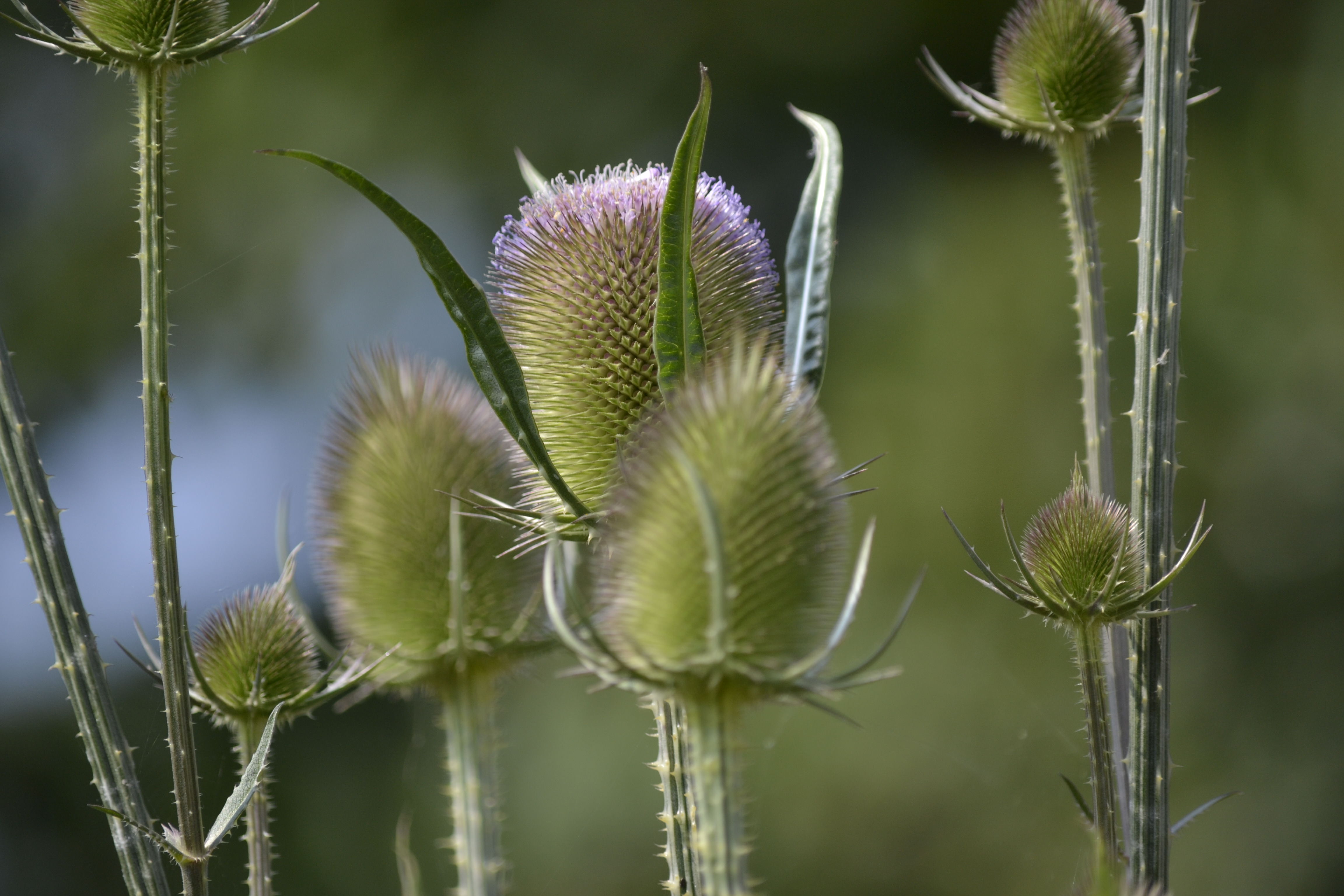 In the first year in the garden, I spread a mix of wildflower seed over two planters near the house. One of the only plants that grew well was the ox-eye daisies. The planters have been taken out but I spread the daisies around the garden. They are a superfood for pollinators with their wide-open flowers providing for a range of insects. Their growth gets a bit untidy in Summer. Then I cut them back and they often go onto flower as late as November and last year there were still ones flowering in December. 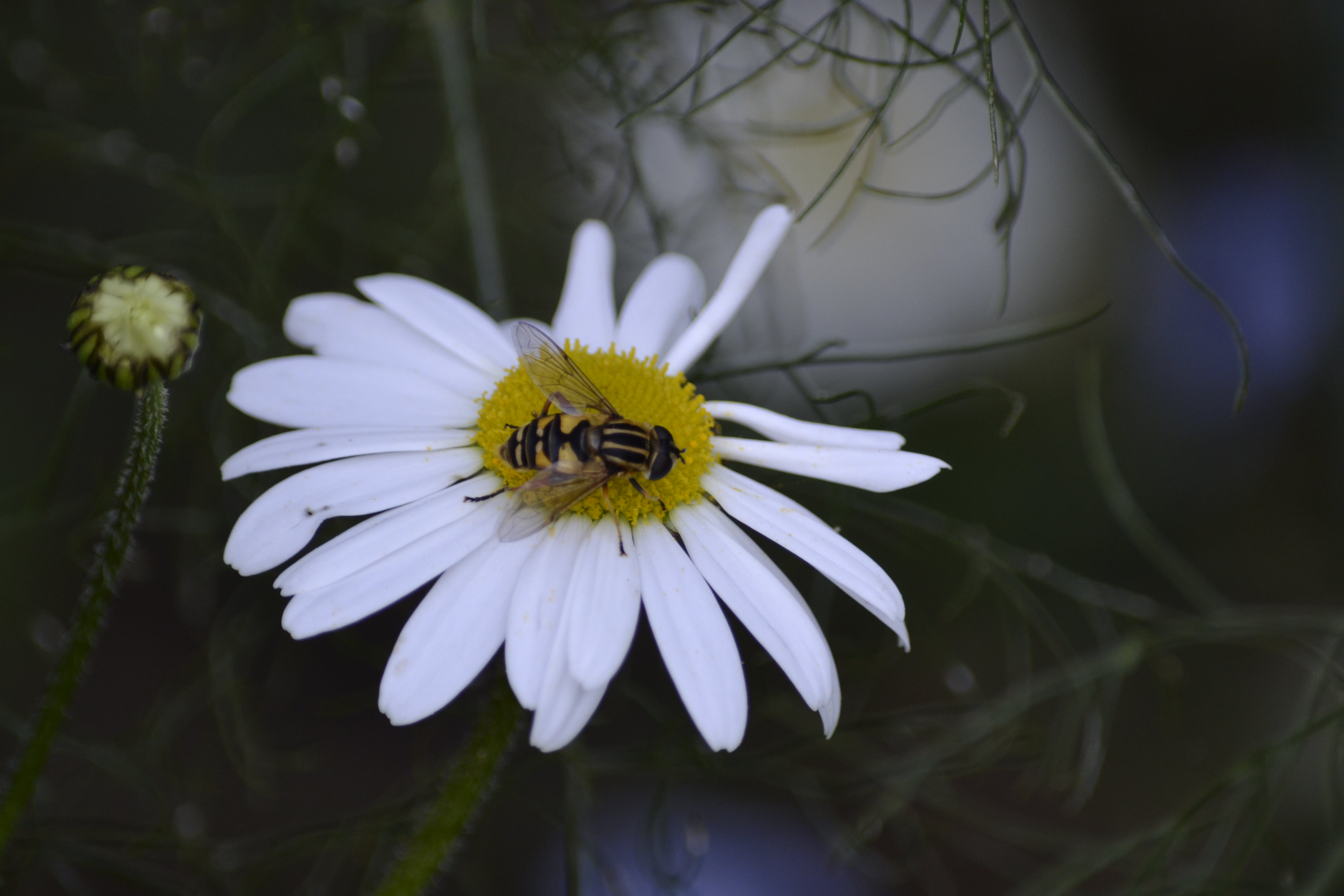 This campanula grows around the cracks in the wall post. It dies back down and comes back each year. The bees swarm around it. It makes use of space that would otherwise be empty. The post has been rebuilt this year but I don’t think the edge has been touched so I think they should still return next year. 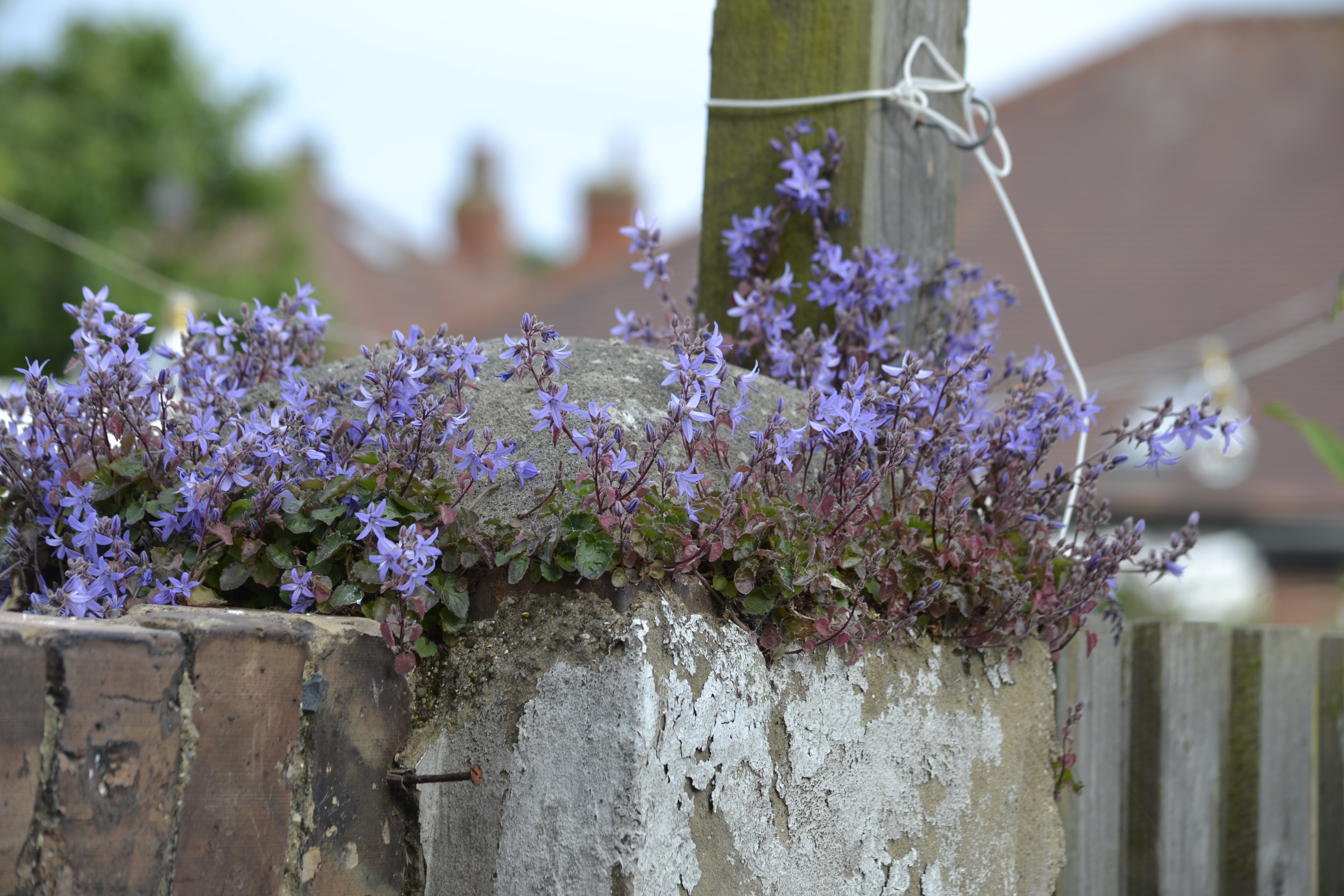 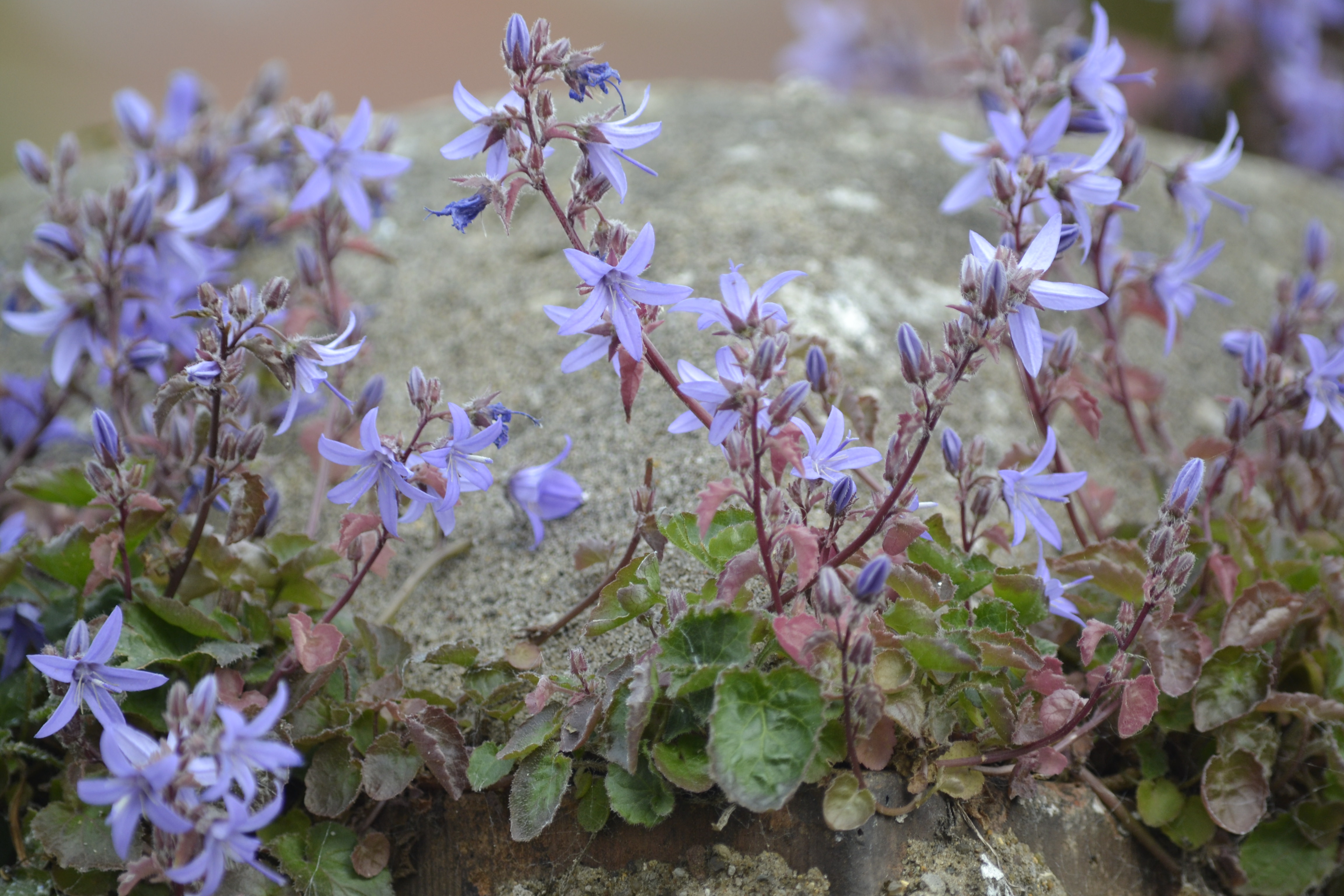 Borage is a bit of an untidy plant but it is great for bees so I allow a few patches to grow at the bottom of the garden. Mine comes up with blue and white flowers. This plant gets recommended for wildlife again and again due to its long flowering period. It seems tolerant of sun or partial shade. I pull it out every so often as it gets too big for the space I’ve assigned it but I let the self-seeders reestablish so I usually have a few patches on the go. It’s a member of the Boraginaceae family along with forget-me-nots, though grows a bit taller than forget-me-nots. The flowers are edible and can be used for cake decorations. 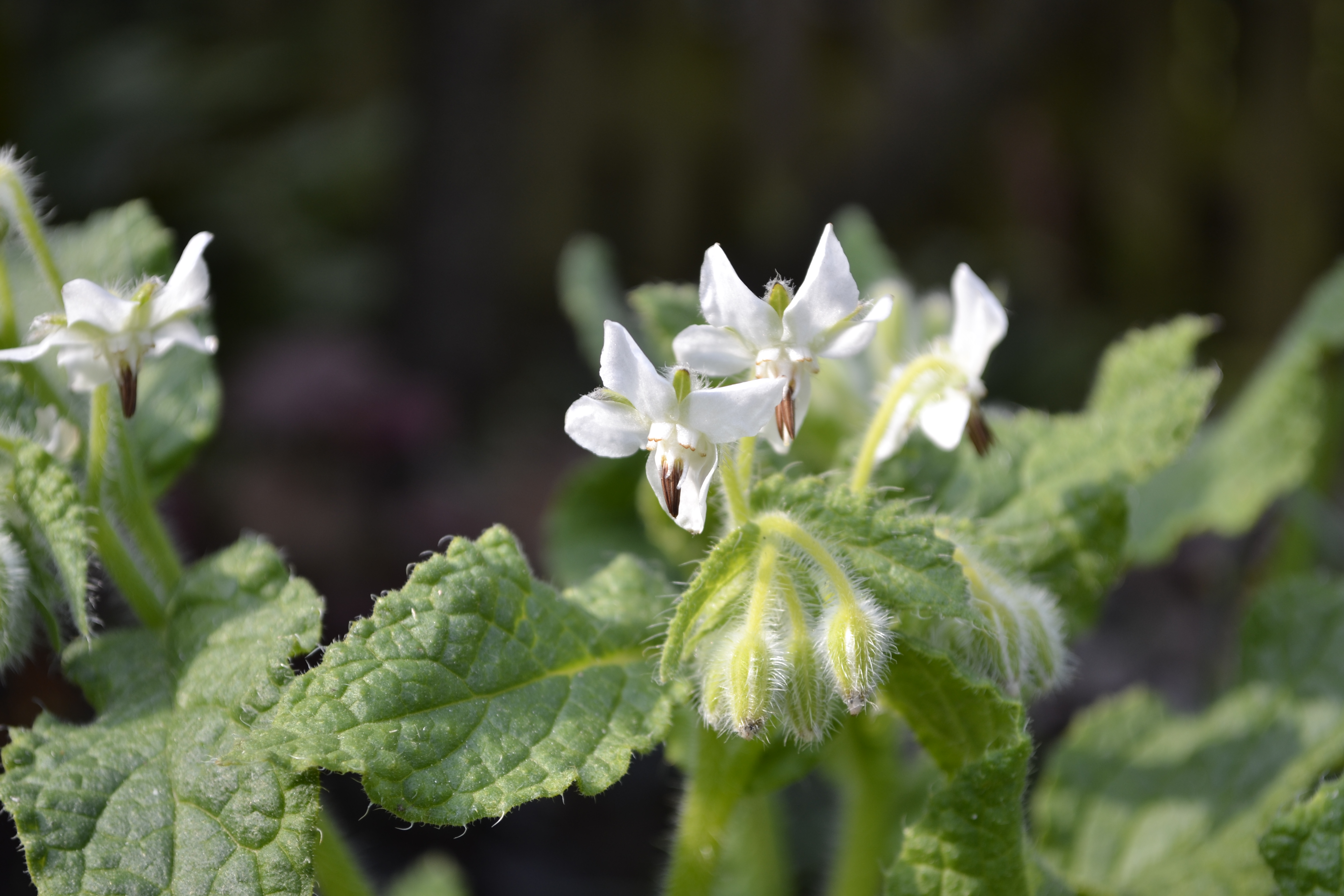 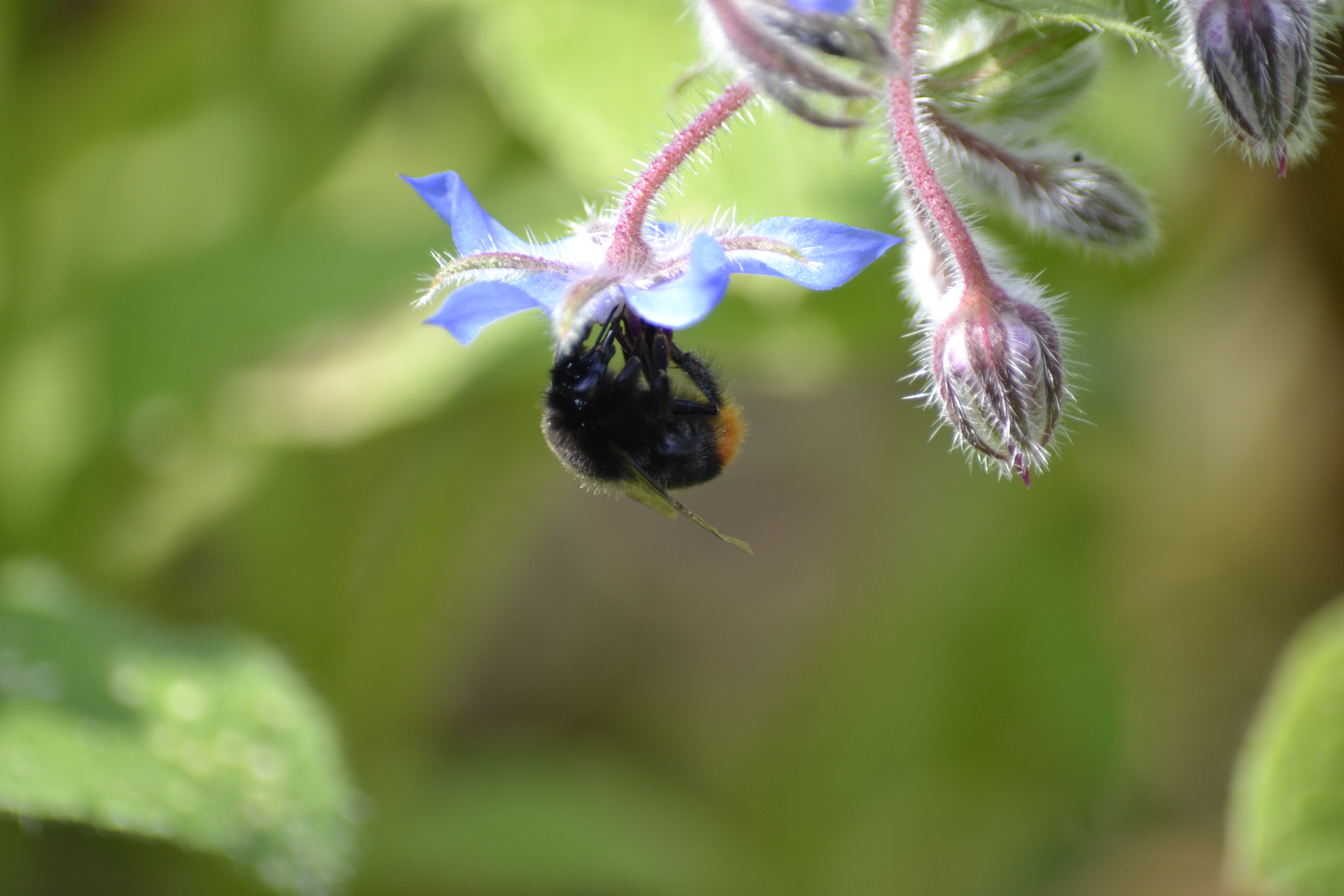 Hart’s tongue is one of my favourite ferns. It is a reliable hardy plant capable of tolerating the cold windy conditions in my garden. The wider fronds make it suitable for growing in a pot or in the border as it the wider leaves reduce water loss from winds. It naturally colonises cracks in rocks. It can grow as a tiny little plant in cracks in walls or grow up to be a decent metre spread. The large evergreen sword-like leaves provide a good structure through winter and contrast well against the summer hostas and geraniums grown in the same area of the border. 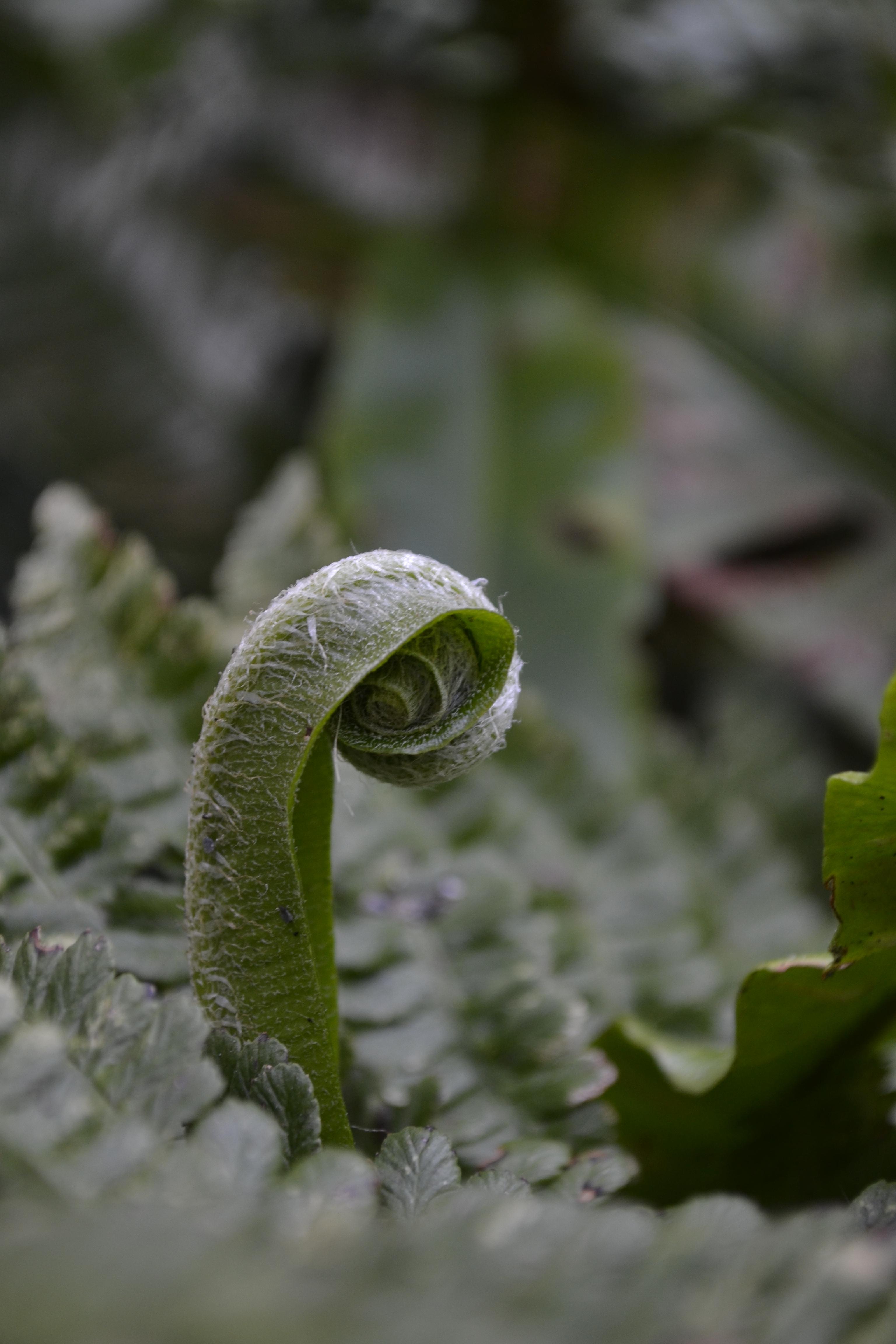 I’ve just moved my biggest patch of harts tongue. It was part of a patch of three ferns that have outgrown their original spaces. It has all flopped in one direction but it will gradually spread out better with the new fronds in spring. 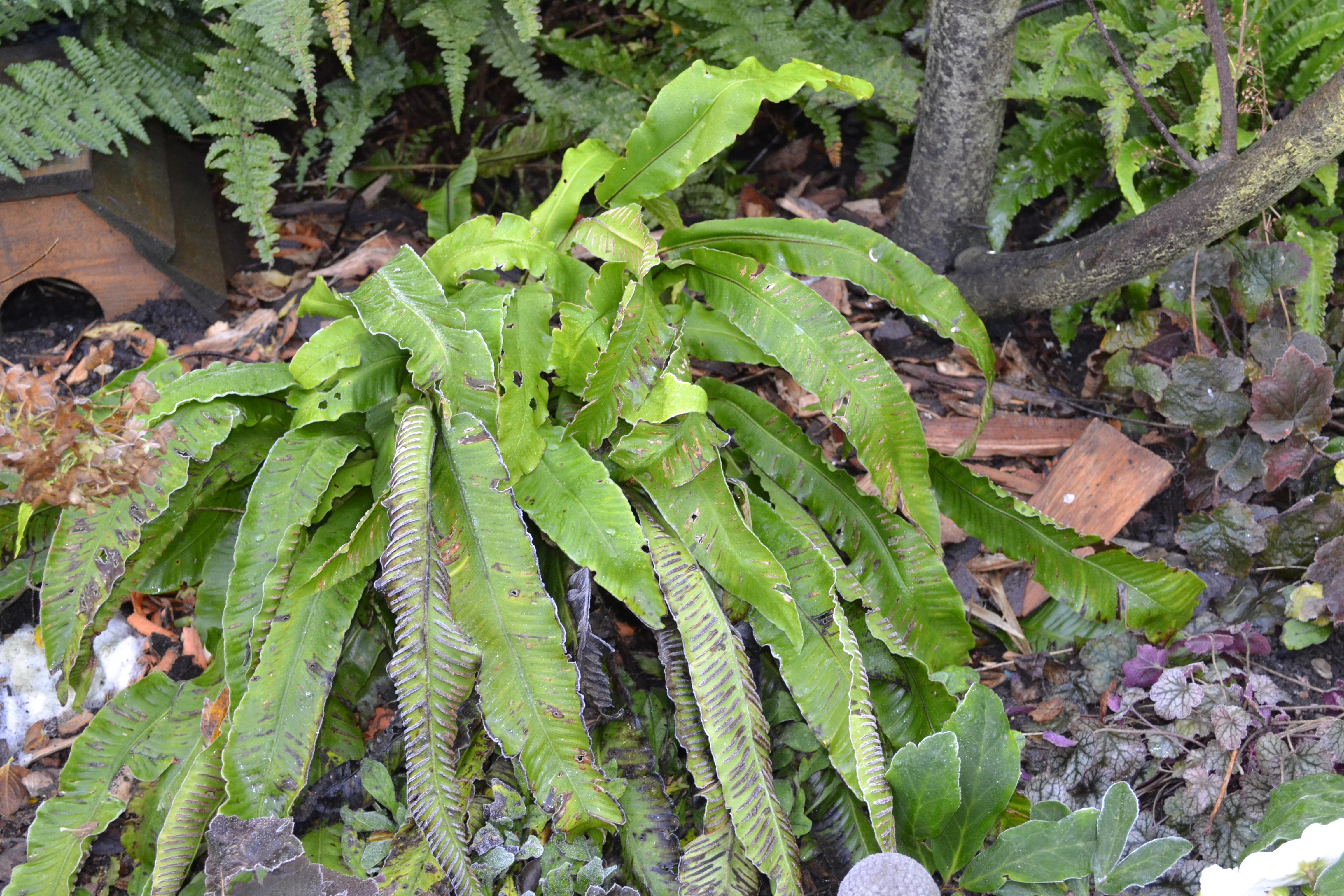 This little fern is another evergreen option that again spreads into cracks in walls. I’ve used it in my window box planters that sit either side of the front door. Combined with the hostas they’ve looked good through summer. The hostas have died down and some crocus has been added for spring colour. The delicate string of little leaves looks good as part of pot displays with larger leaves like the hostas. 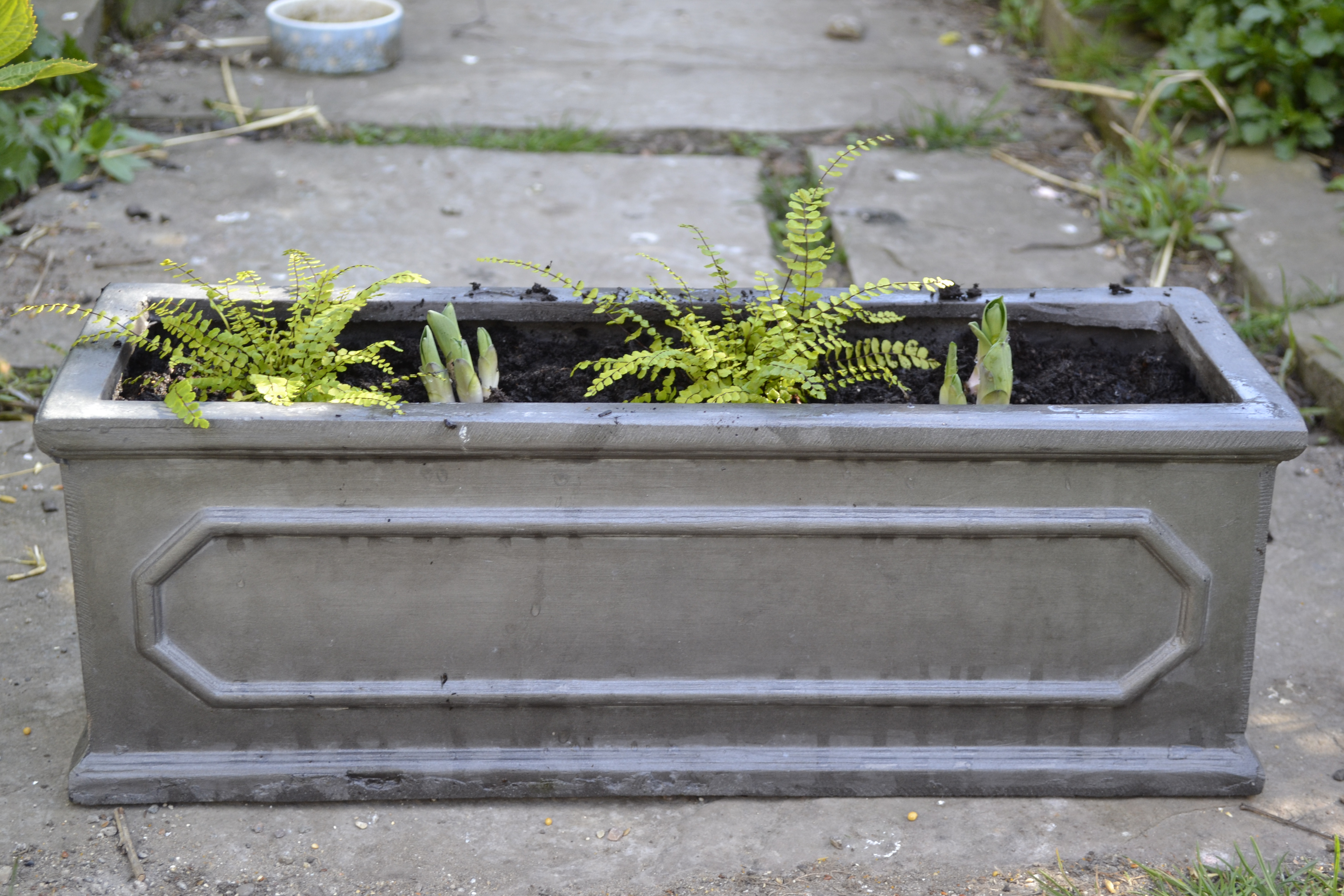 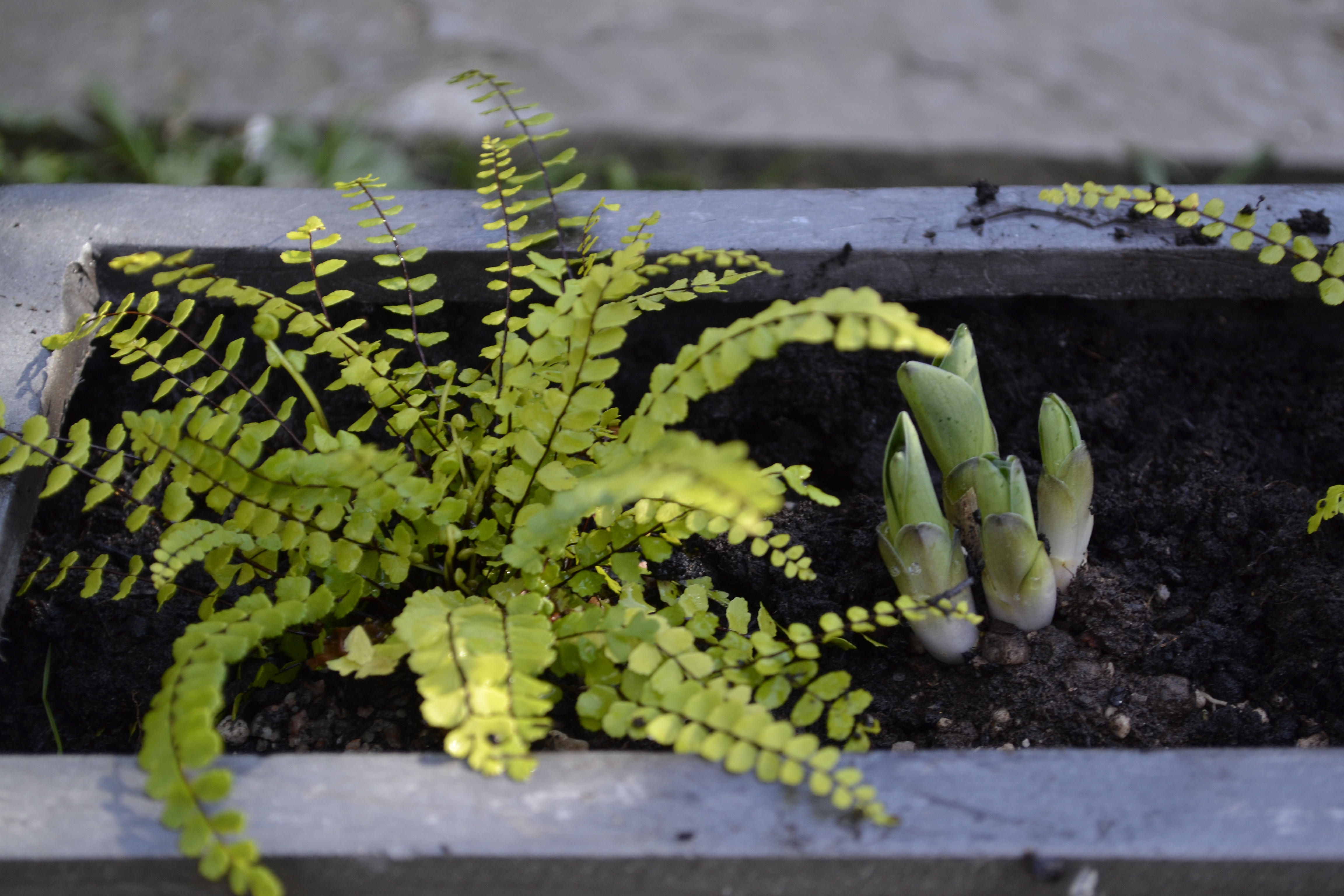 I hope you’ve enjoyed this weeks foray into weeds. I’m still a bit poorly after last week but I am up and mobile. It is Amy’s birthday celebrations tomorrow so I’m probably not going to get much chance to garden this week. I want to shift a few plants around after planting the holly tree last week and I’ve picked up a few cheap hellebores to add some winter flowers. Don’t forget to check out the other six on Saturday posts through the comments of the Propagator’s blog.