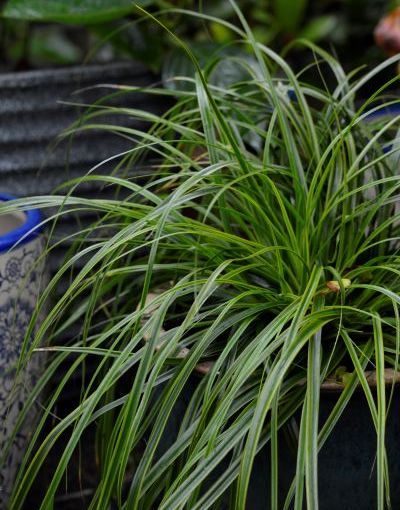 My current bedtime reading has been Christopher Lloyd’s ‘Foliage plants’. I’ve read a few of Lloyd’s books, ‘the well-tempered garden’ and ‘exotic gardening for adventurous gardeners’ and I very much like Lloyd’s writing style and his garden style. I’m glad I left out ‘foliage plants’ until I developed a reasonable knowledge of plants from growing many myself and browsing nurseries stock as many of the plants mentioned would have been lost on me whereas I have really enjoyed it for being able to see how these plants could be used in my own garden. The chapter on ferns had me nodding along and the chapter on trees gave me a desire for more space. I have discussed my love of foliage many times over the blog and social media. Foliage gives you so much more interest than many flowers and for much longer periods.

It is an indisputable fact that appreciation of foliage comes at a later stage in our education, if it comes at all. Christopher Lloyd ‘Foliage plants’

As we slide down towards winter the remaining evergreen foliage becomes more significant as it makes up the remaining structure of the garden. After a week like we’ve just had of rain and flooding the foliage looks lush while the few remaining flowers look bedraggled. So this week I am focussing on foliage and most of it is evergreen to boot. 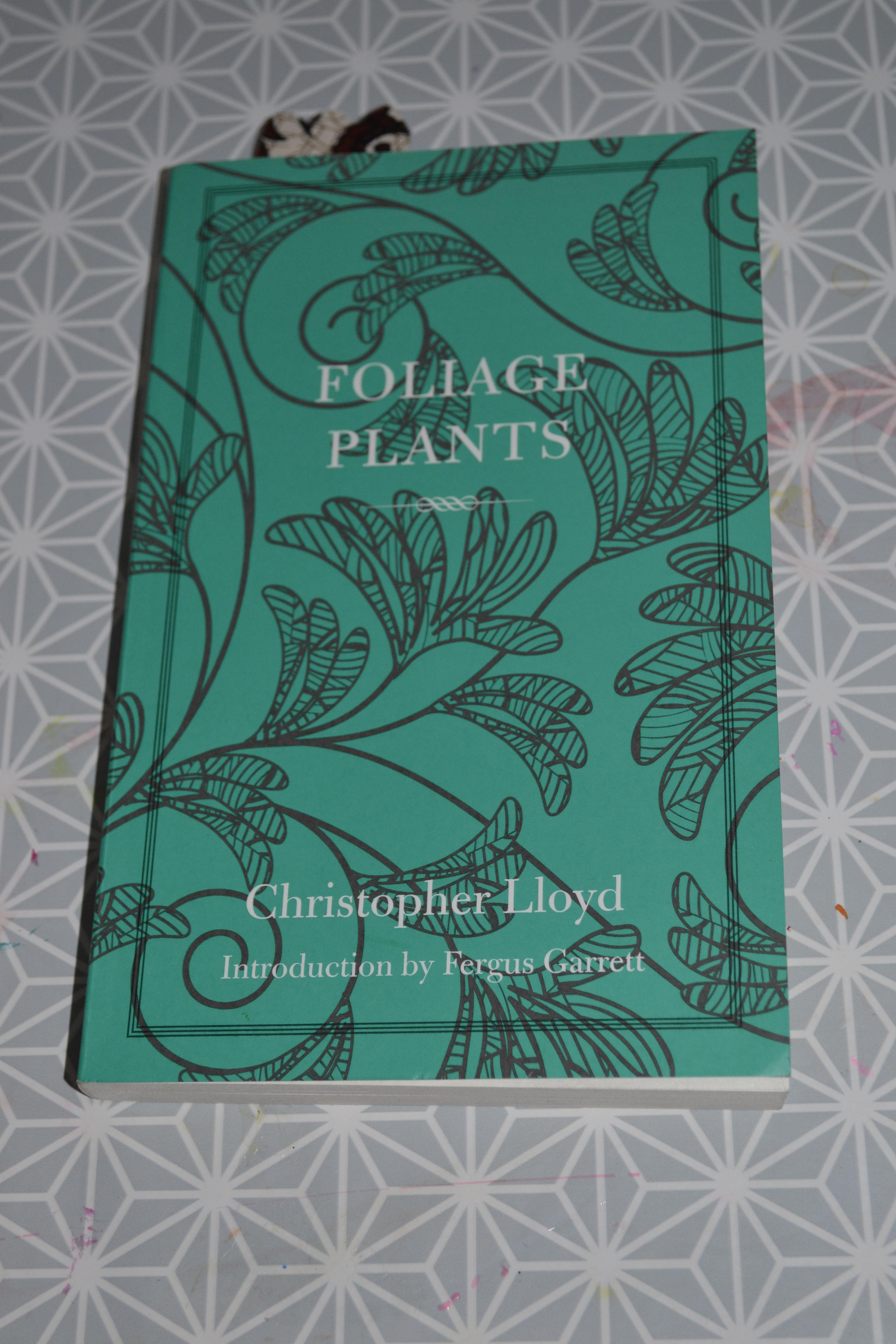 I don’t make much use of grasses in the garden but I was seduced by the darker striped leaves of this variety. It’s gone into a pot currently. It is evergreen so will give the patio some winter interest and will offer a contrast to the heuchera in colour and form over winter. Then as the year goes on and the hostas return the thin leaves will make a nice contrast to the hostas wider leaves. 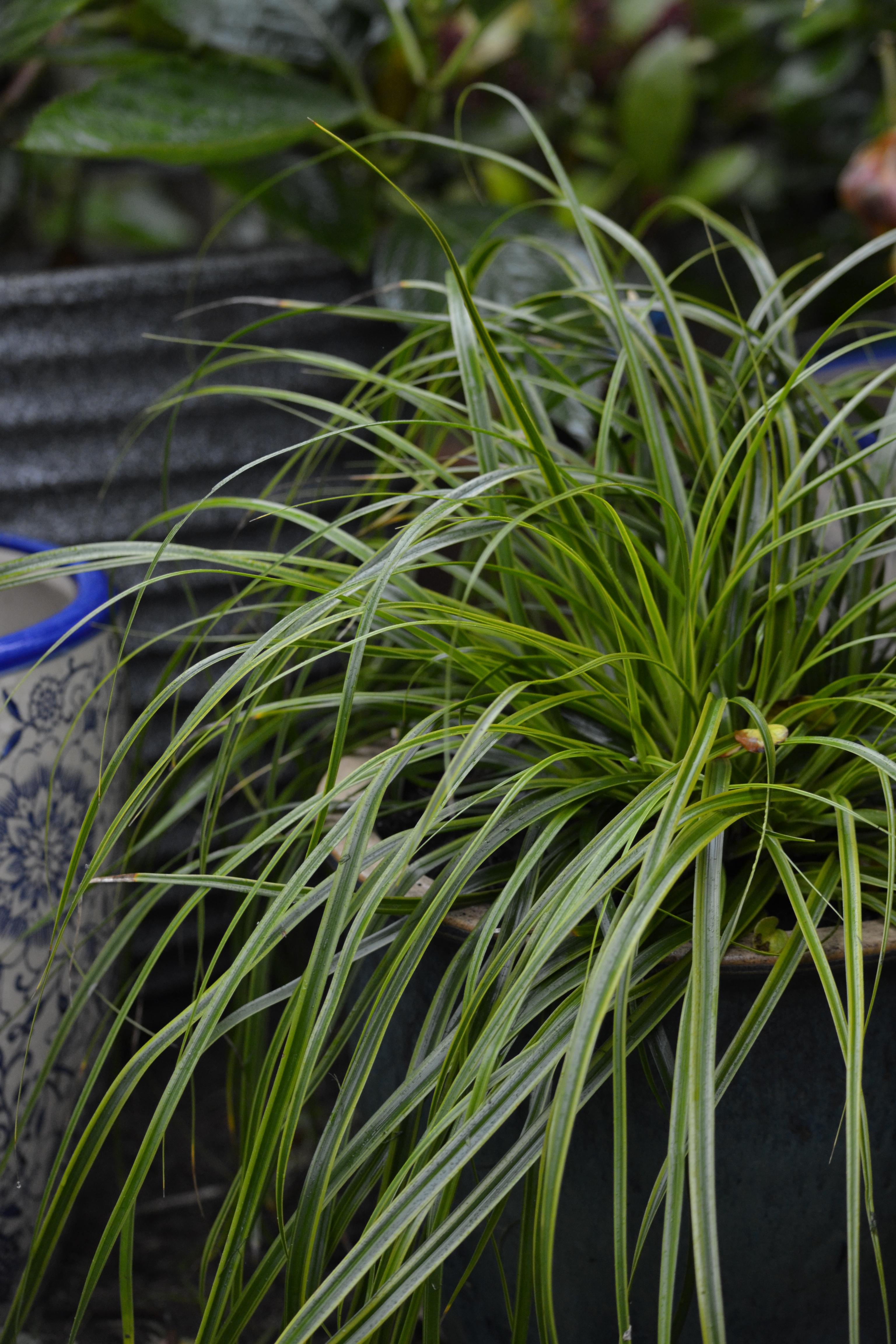 Another new addition, this little green heuchera isn’t much to look at currently. It doesn’t have the zing of lime marmalade but I think as it establishes it will make the other darker colours stand out more. It is supposed to have very vibrant pink flowers in late spring so we’ll see what delights it brings. 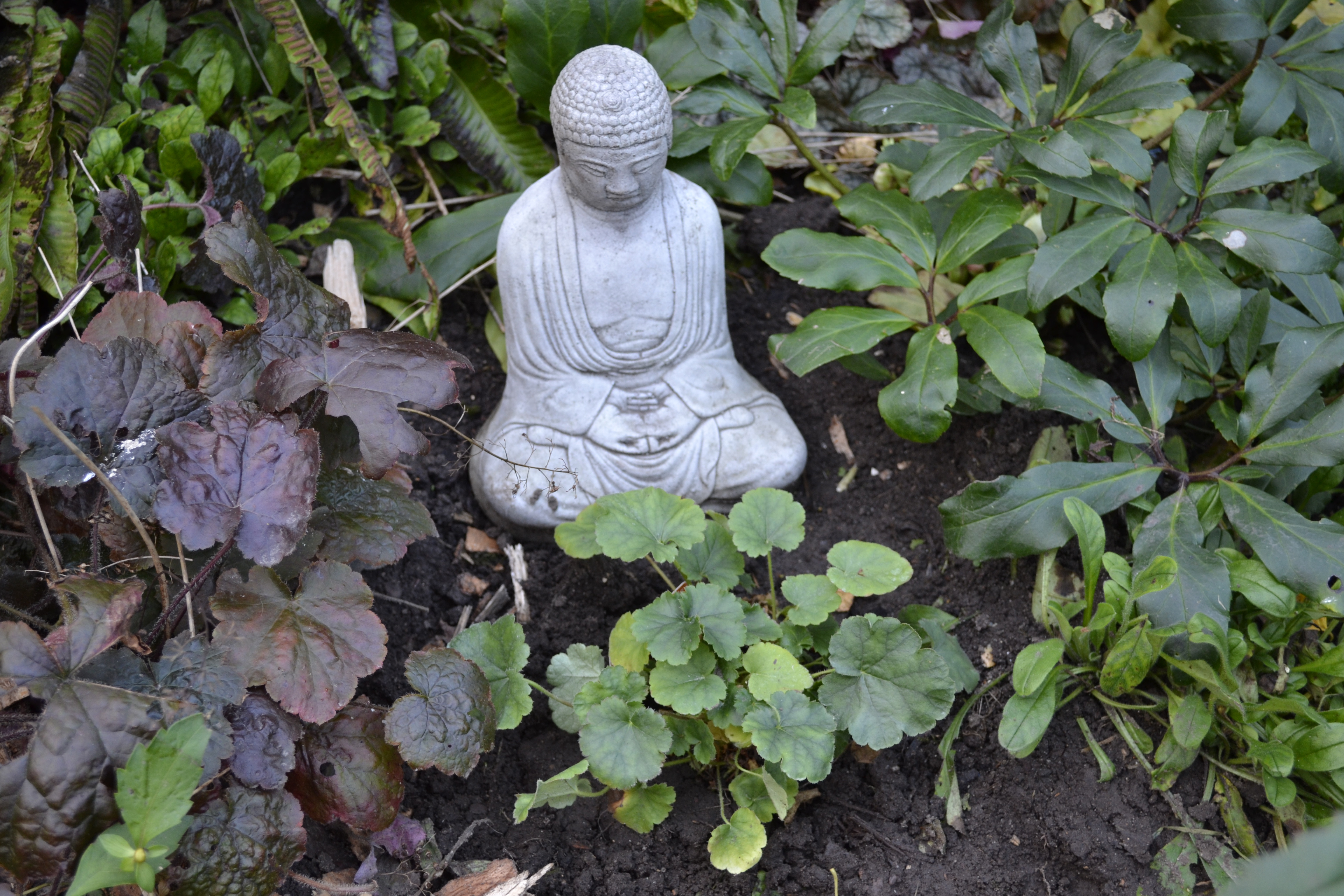 Heuchera’s are generally known for their wonderful foliage and this one isn’t all that exciting but it is evergreen with slight veins showing. It should form just a little mound of green adding contrast to a few surrounding plants. 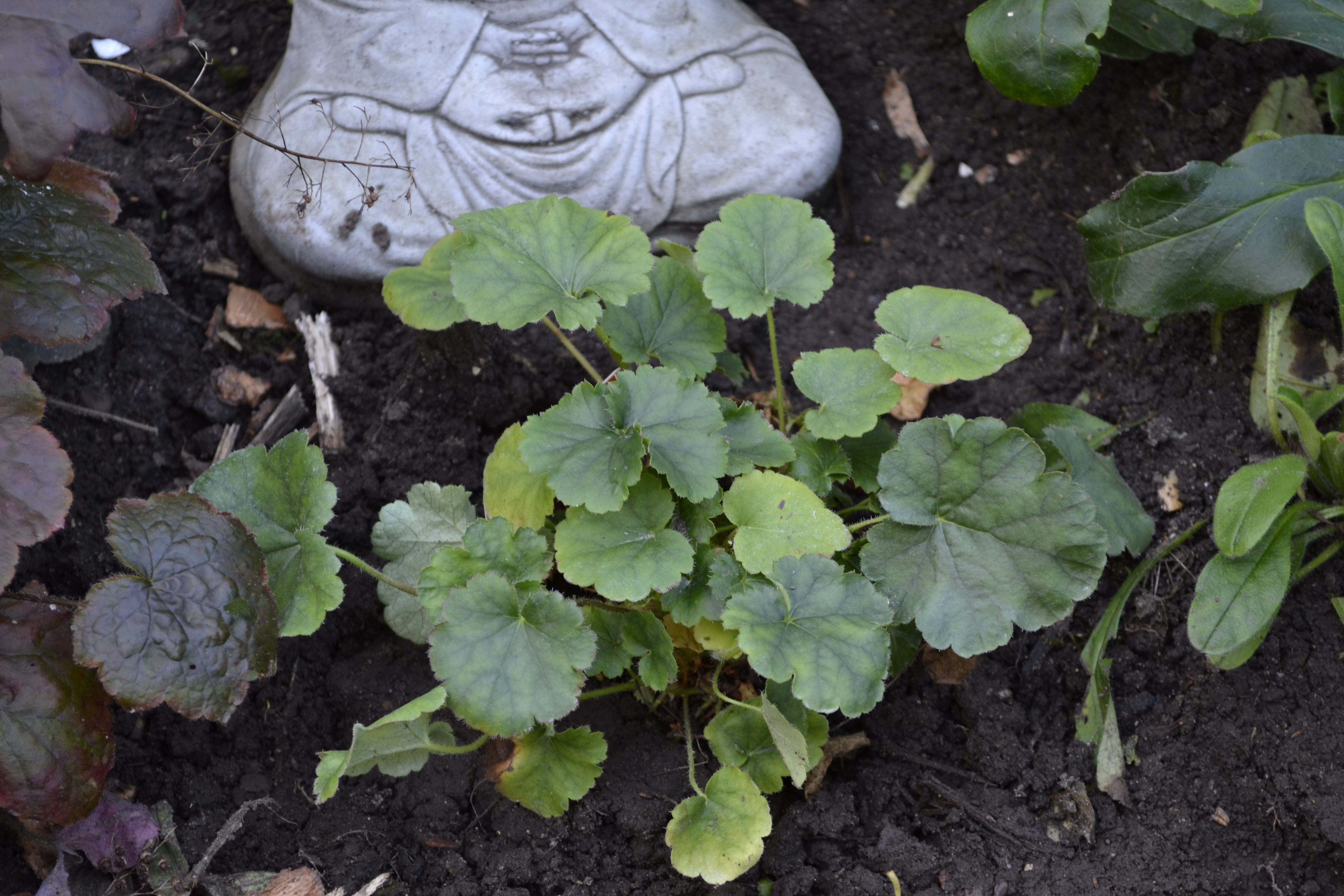 This mix of heucheras have been sat together and show how wonderful foliage can look together. Here we have, from left to right, marmalade, huckleberry, wild rose and purple palace. Surprisingly Christopher Lloyd doesn’t really mention heucheras in foliage plants. I’m not sure whether this was due to a dislike or lack of availability at the time of publication. Though according to the hardy plant society they were introduced to the UK in 1882. Either way, I wouldn’t be without them. This selection will offer colour through winter.

Heuchera purple palace was put forward for an RHS competition to select the most popular plant introduced at the Chelsea flower show over the 100 years. It was first shown in 1983 and since then we have had so many varieties introduced. At the time it launched a fashion for foliage plants, though now purple palace is so every day that it is unremarkable within my collection. But these are very versatile plants. As evergreen they offer a long period of colour, just looking a bit the worse for wear in the darkest winter when they can hug the ground, but then who is going out to look then anyway? They work in pots, front of the border and like shade. Bulbs can be grown up around them giving spring interest, then the heuchera remains for the rest of the year. 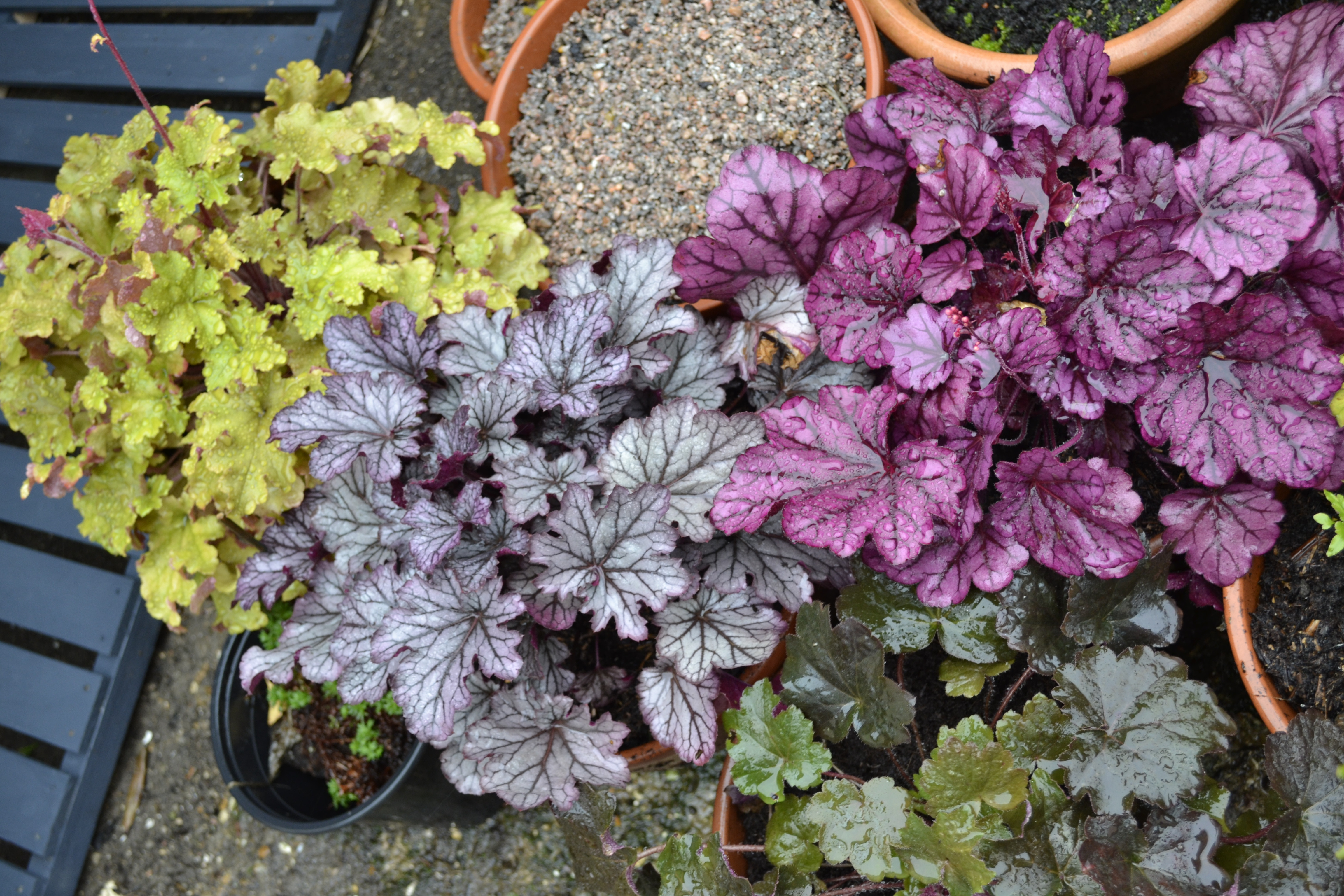 This is a new addition to my ferns. In milder climates, it can remain evergreen, but for me, I think it will probably stay green for much of winter before fading away before the fresh green fronds come in spring. I was taken by the serrated edging of the leaves. I think this might make a nice contrast to some of the wider leaved foliage plants or one of the wispier ferns. I haven’t settled on a position for this yet. It may go in a pot or in the border around one of the acers. 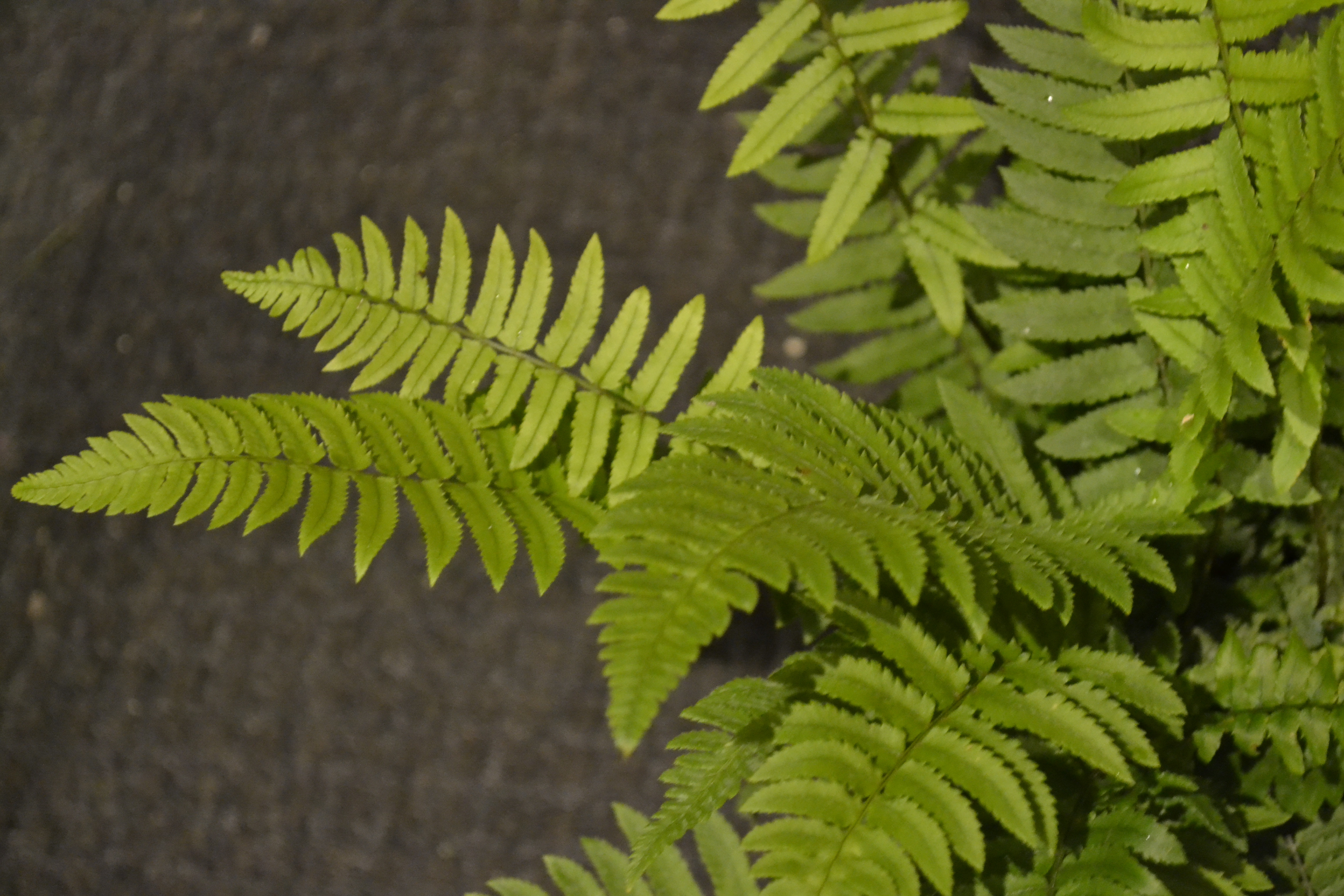 I bought two fatsias last year. One plain green and one variegated spider web. The spider web has a reputation as being less hardy, though I found mine came through winter looking slightly better than the plain. Both are solidly robust foliage plants. The giant leaves look lush when wet, which is all the time currently. I ma growing mine in pots for the patio. If I had a decent space in the border I could happily let this romp away to form a big shrub, but I can’t really fit it. 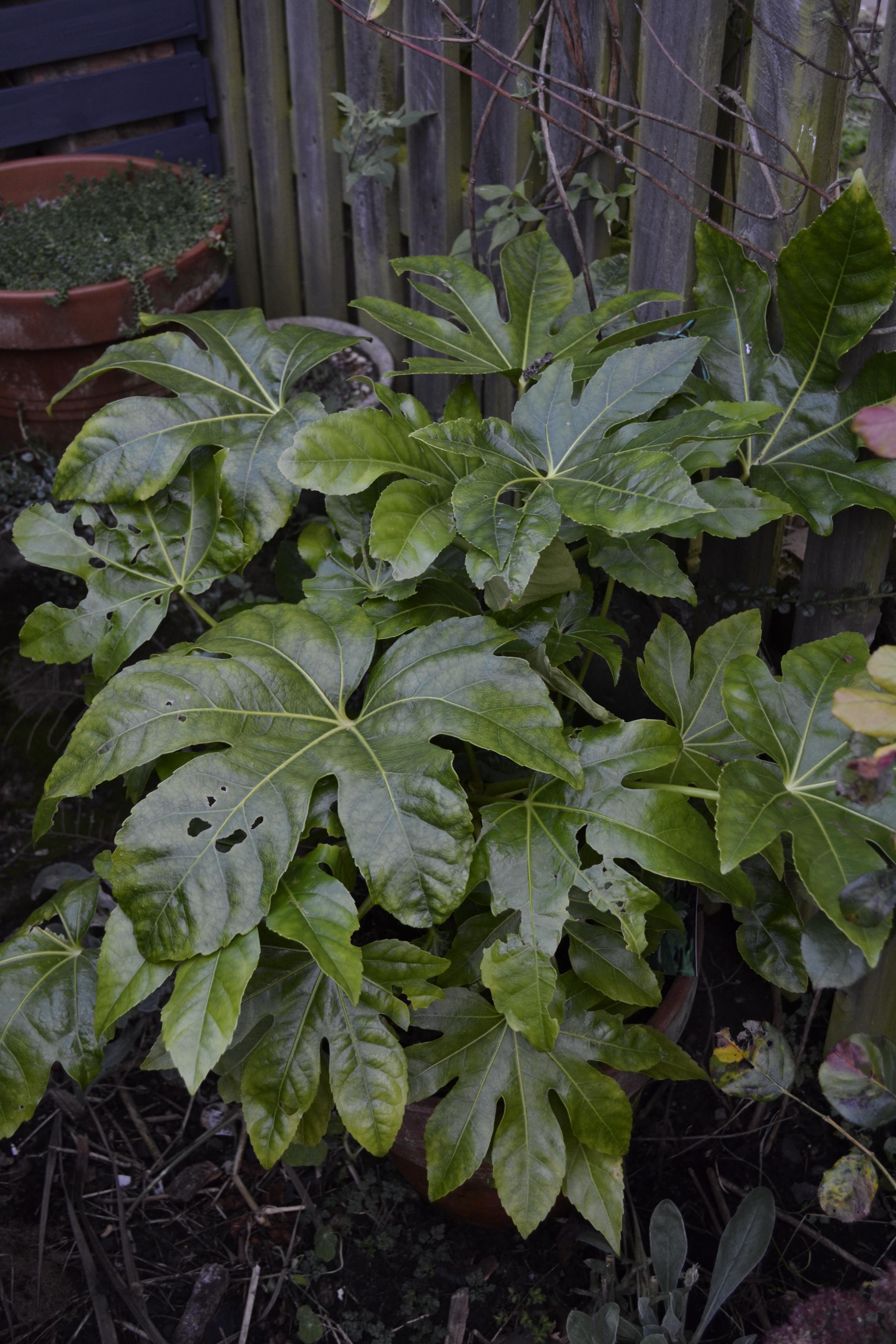 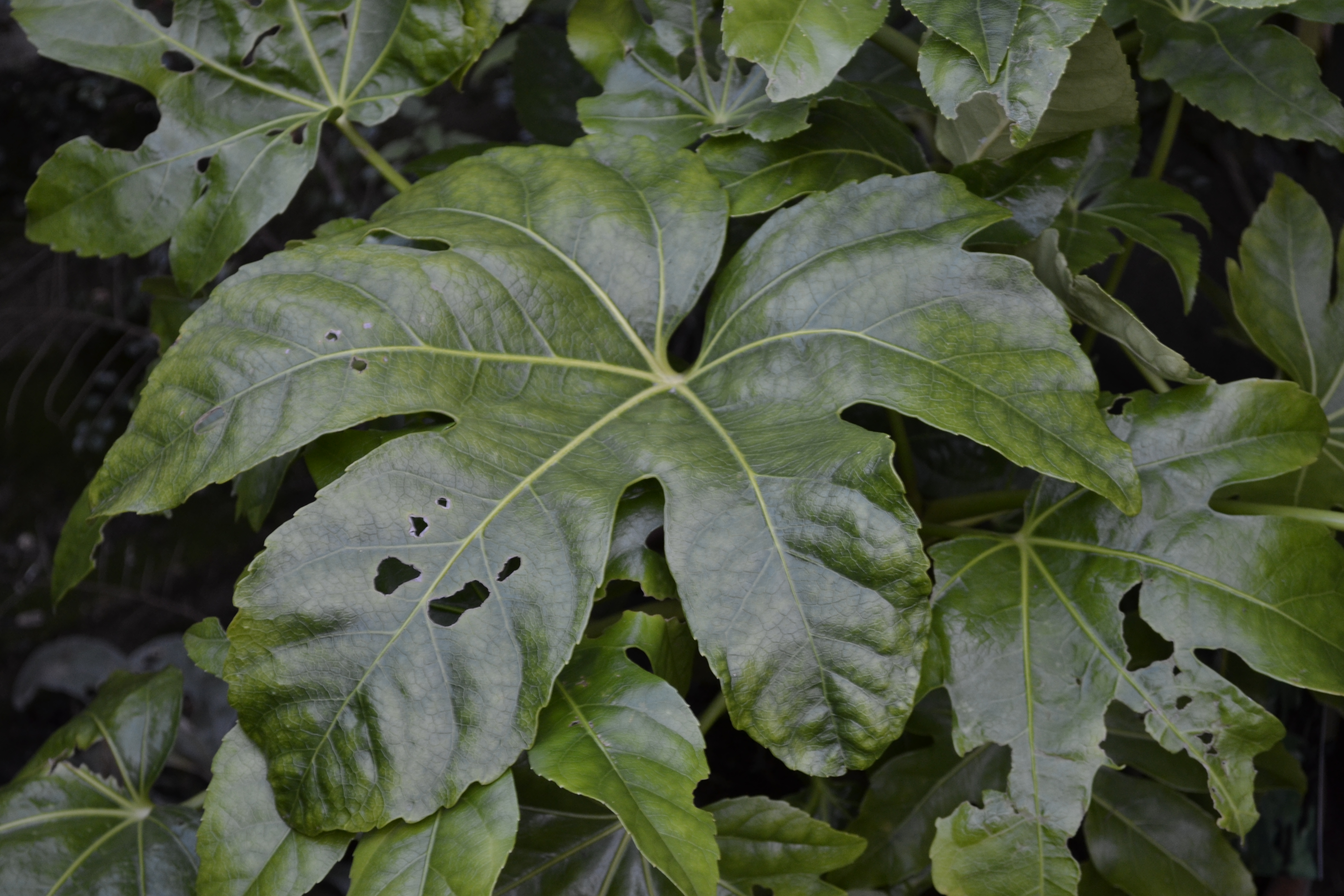 The spider web is set to flower. The flowers clearly show the link to ivy, and the two have been hybridised to form the climber Fatshedera lizei. Though by most accounts this isn’t a great cross as the plant needs training and supporting to get up anything. My spider web foliage is probably doing slightly better than the plan as it hasn’t been chomped as much. 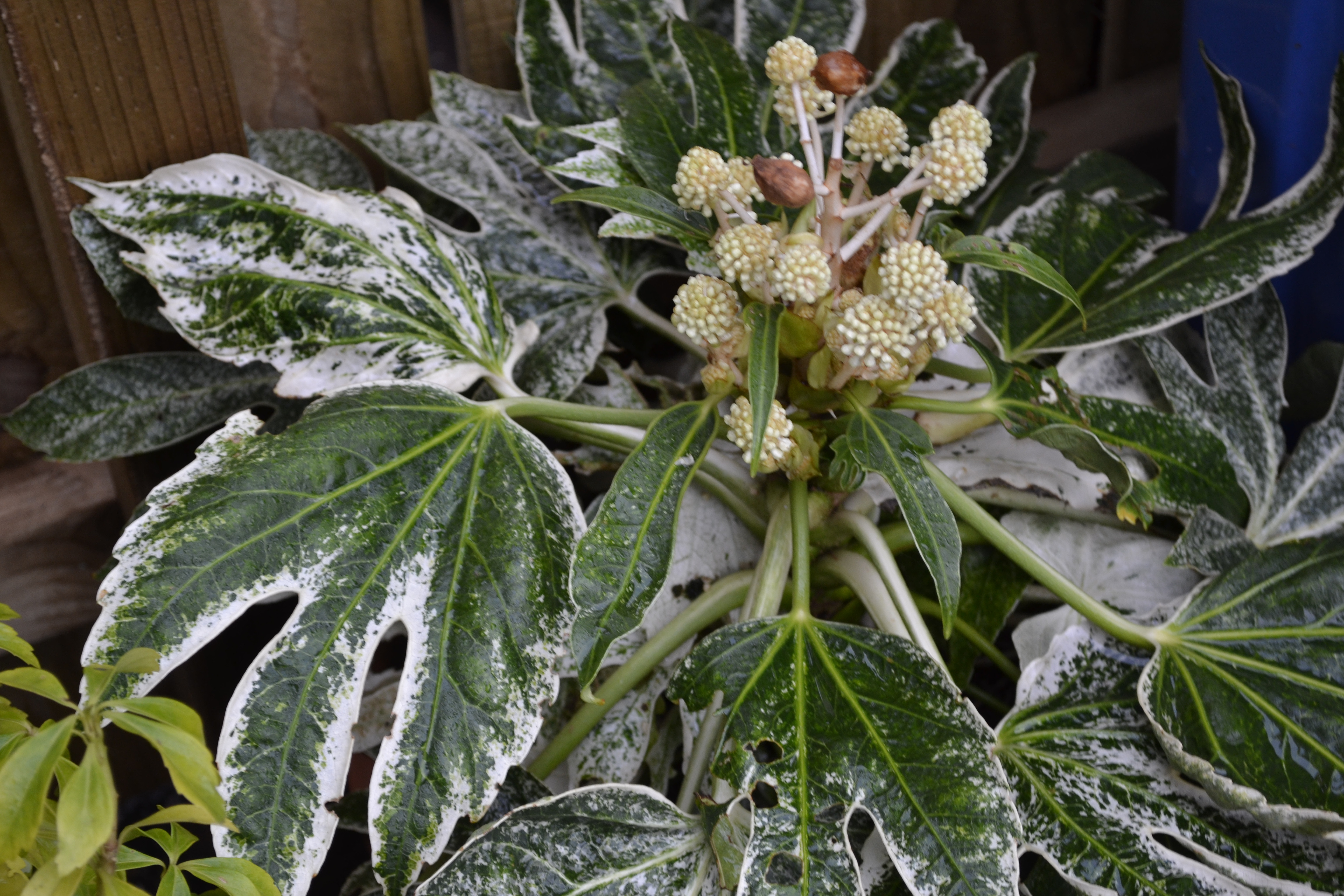 One of my few silver foliage plants. Though under the heavy rain we currently are experiencing they go greener. These have made for great contrast with the dark-leaved Bishop’s children dahlias. Every so often they shoot out little yellow flowers. These somewhat spoil the look of the plant but the hoverflies enjoy them so I tend to leave them on. 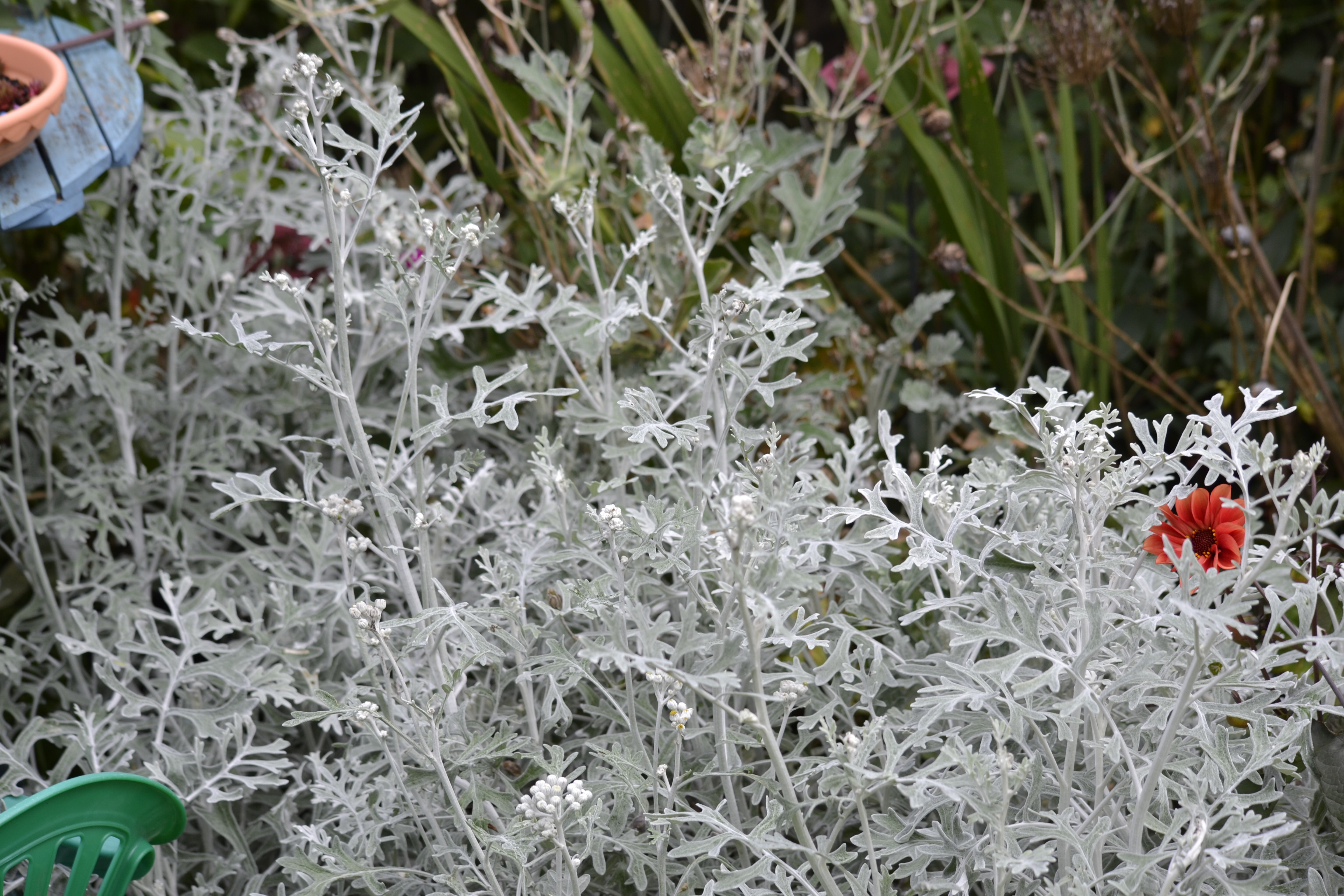 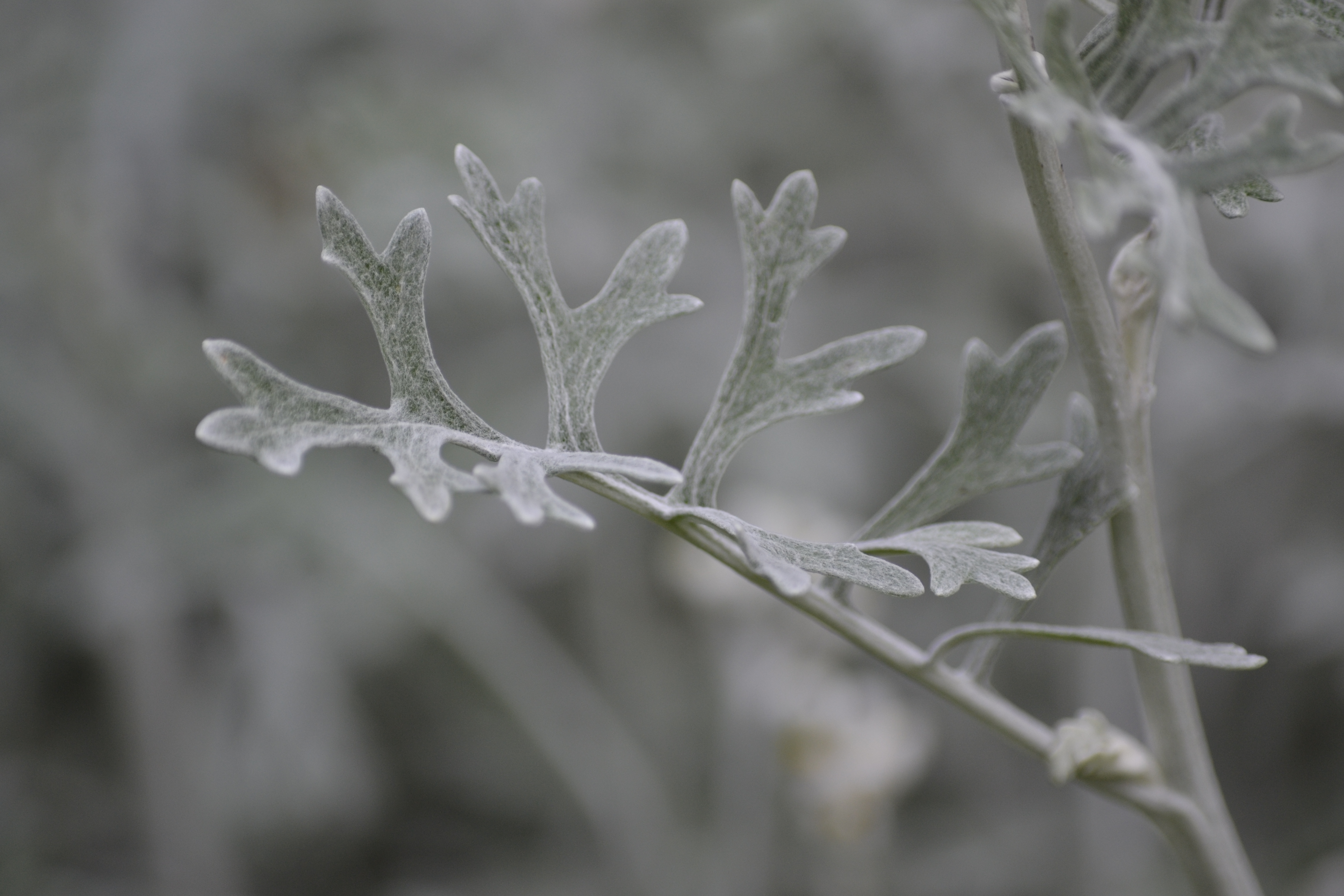 I hope you’ve enjoyed the foliage on offer. I know it might not be everyone’s cup of tea, a rose or a dahlia will always get more attention but at this time of year, these are the true workhorses that are going to keep the garden going. My lawn was looking to have a good cm of water resting on it on Thursday night so I’m going to be treading carefully out there today. I hope the rest of you haven’t suffered too much.