Having returned from holiday I have got back out to continue with my front garden revamp. While we have been away the front path has been taken up. The crumbling concrete path has been replaced with smart pavers. Last time I wrote about the front garden I was leaving off planting part of the garden as there was still the path to complete. Now I’ve been able to get out and planted up a bit more of the space.

The view from above

The views from above shows the right side where I started planting has started to fill out well. The plants closest the path went in yesterday. I’ve given them a good soak in to help establish them. I’ve been sticking to ferns, hostas and heuchera so far. I’m aiming for a mixture of foliage with different shapes and colours. The garden is North facing thus all the shade lovers but luckily I like foliage plants. I’m keeping the flowers minimal and getting the colour through the leaves.

The view from above shows there are still some gaps to fill. I’ve used some coleus and alchemilla to fill gaps while the other plants fill out. I’ve bought stepping stones for half the circuit. They lead to the water butt, then back round to the path. The idea being I can water all the areas from the stone to limit how much I step on the ground. Alice does a circuit round each time she comes out the door which is quite useful for stopping her running out onto the road. The stepping stones in the bottom part of the photo are just temporary until next month when I’ll buy stepping stones to complete the circuit. These were log cookies we had spare from the wedding. 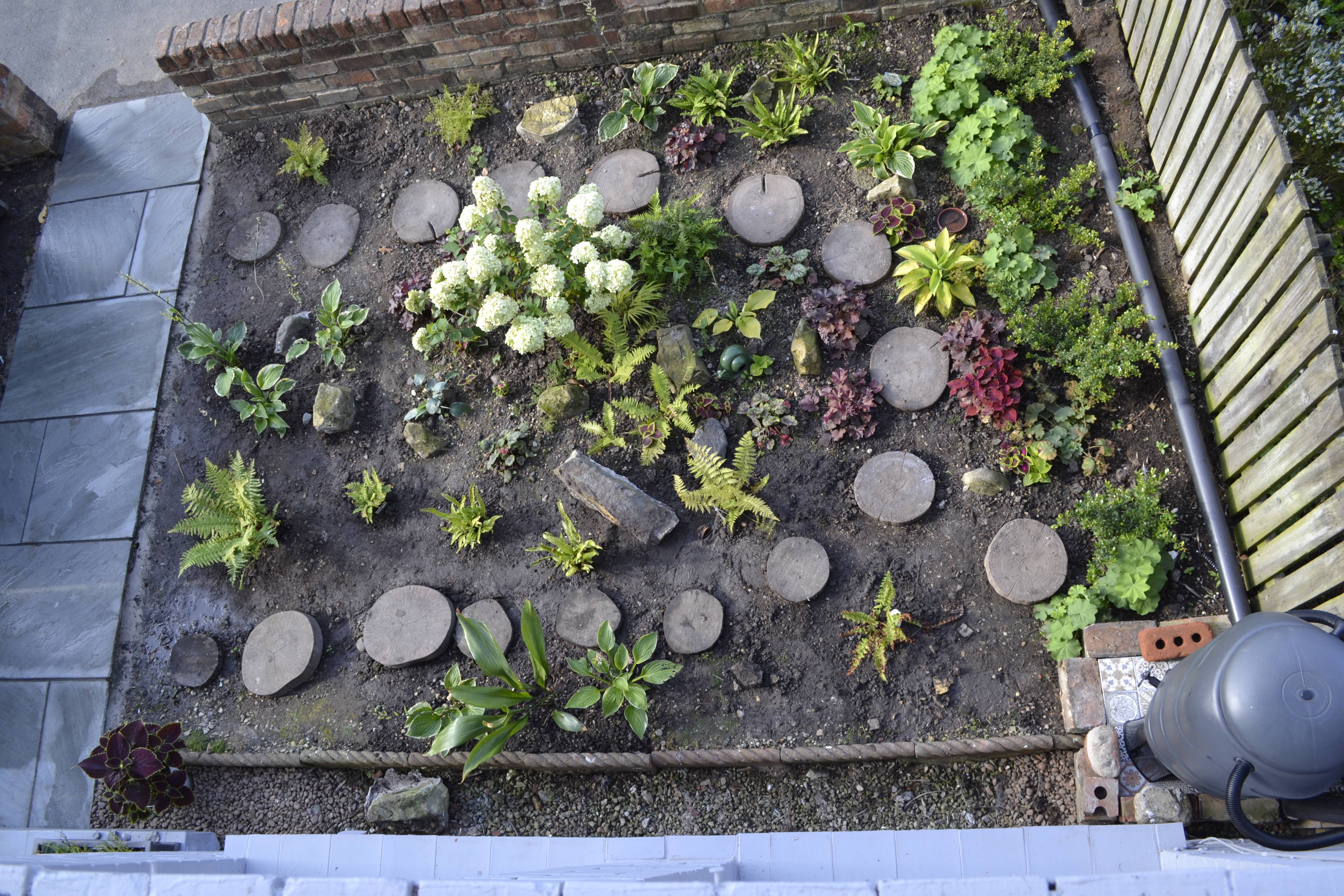 The wall where the bins are was on the point of collapsing so we’ve had it replaced with a fence similar to the other side. It’s odd but the bins feel tidying for having a fence taller than them. We are planning long term to build a bin tidy out from the fence to hide them. Next door has started tidying their garden. They said I’d shamed them into tidying, though they did say it jokingly rather than edged with venom. They are looking to plant something in the middle of their circle, then put fresh weed matting and gravel down. I’m trying to encourage them to continue the hydrangea love. But I think that would suit the spot: shaded, minimal effort, long period of interest. 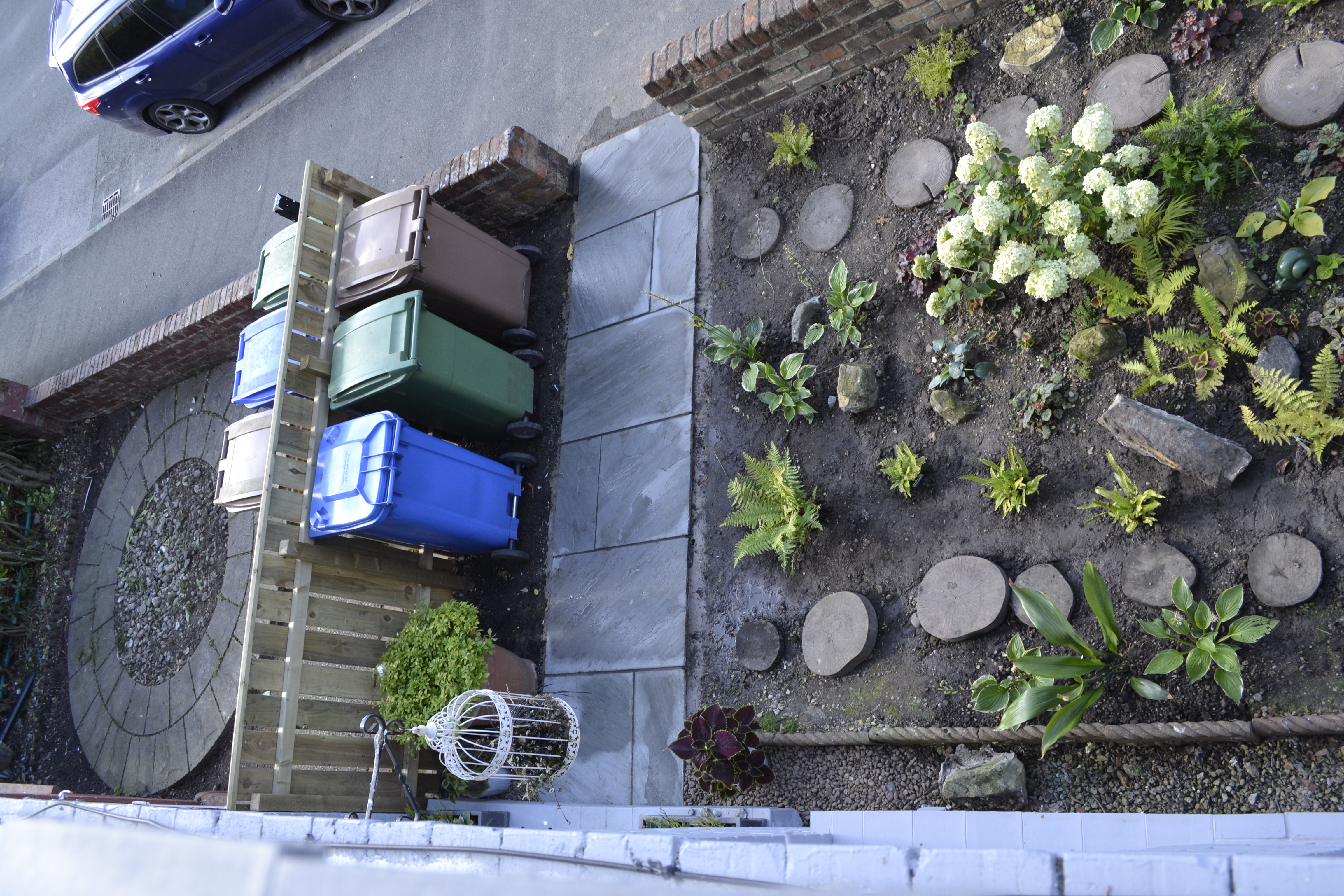 The supports over the front door had partially rotted and we were considering removing. The gaps were filled with expanding foam, then the edge with wood filler. It’s had the first layer of primer. We are deciding whether to paint white or to go dark grey to contrast with grey of the bricks. The path looks much improved for the new pavers. 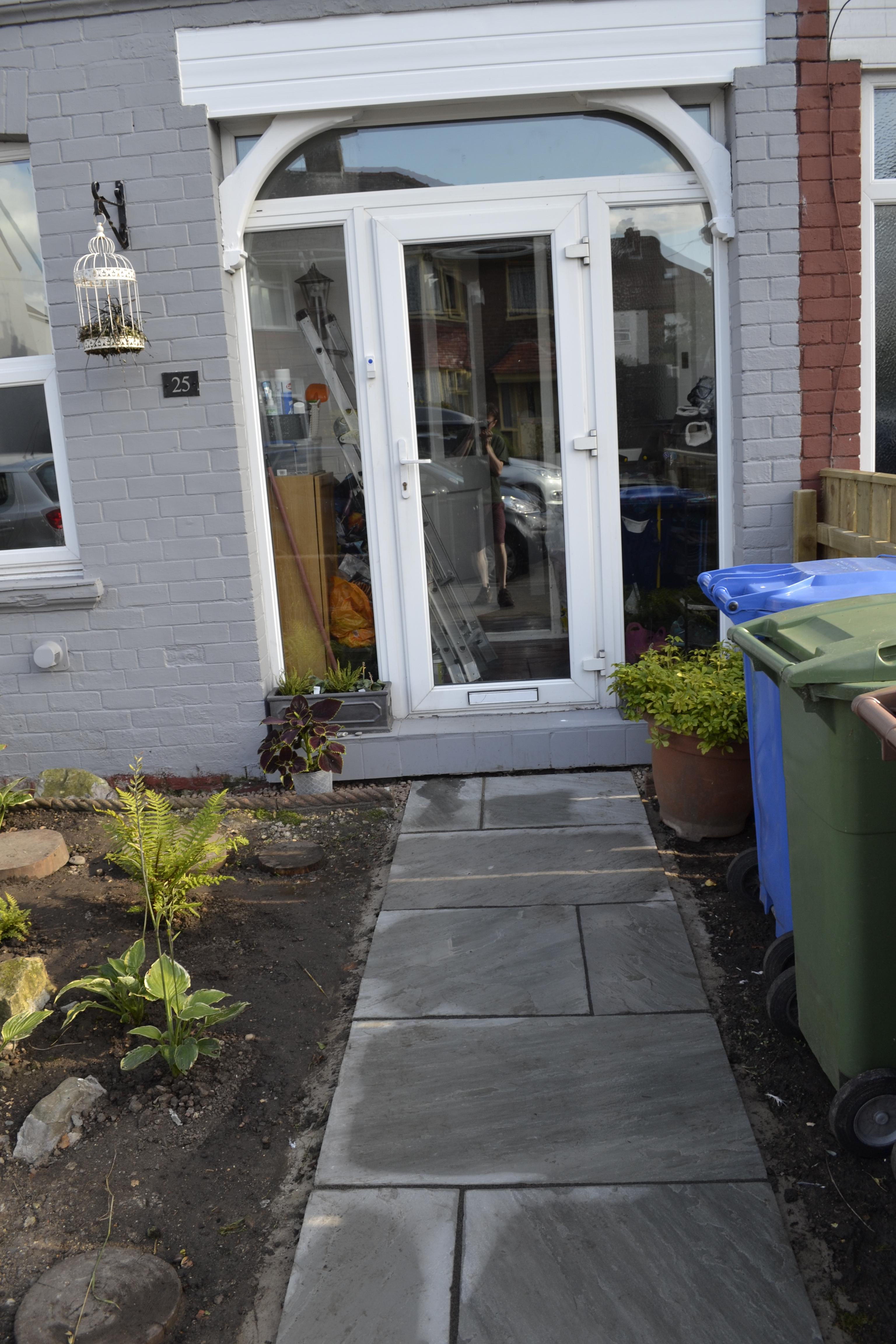 On either side of the door, I have placed these planters. They were intended to be used as window boxes but I can’t support them well under the window and they aren’t really big enough. I think they are looking smart here though. The coleus in front of the planter was grown from seed and is adding some temporary interest. I’m planning to add some snowdrops or crocus to the planter for some Spring interest. The hostas will die down for winter. The ferns are evergreen but will brown off to be replaced by fresh fronds in Spring. 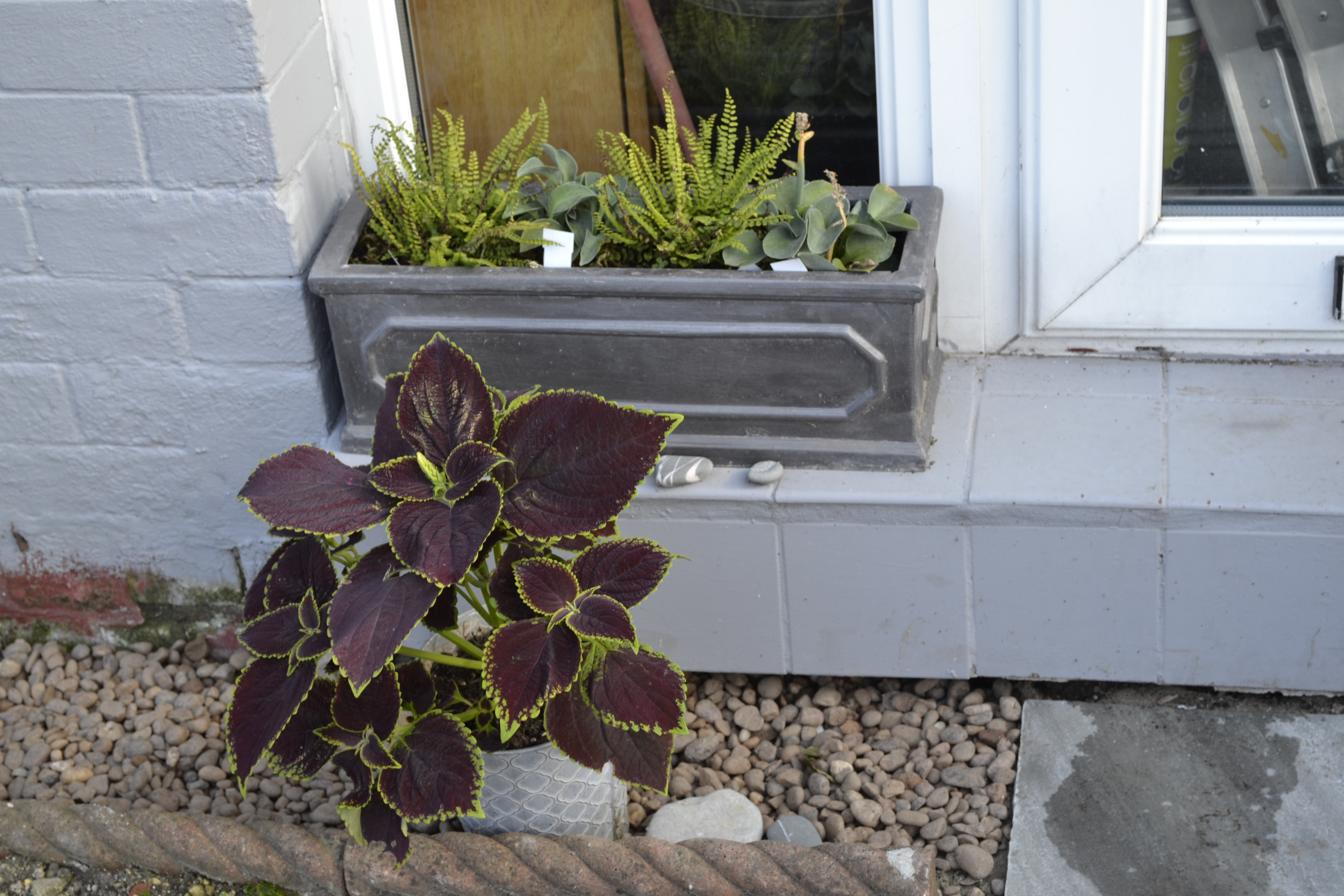 The hanging basket was looking a bit dry from us being away so I’ve cut back some of the trailing plants. I think it’ll grow back with a bit of care. 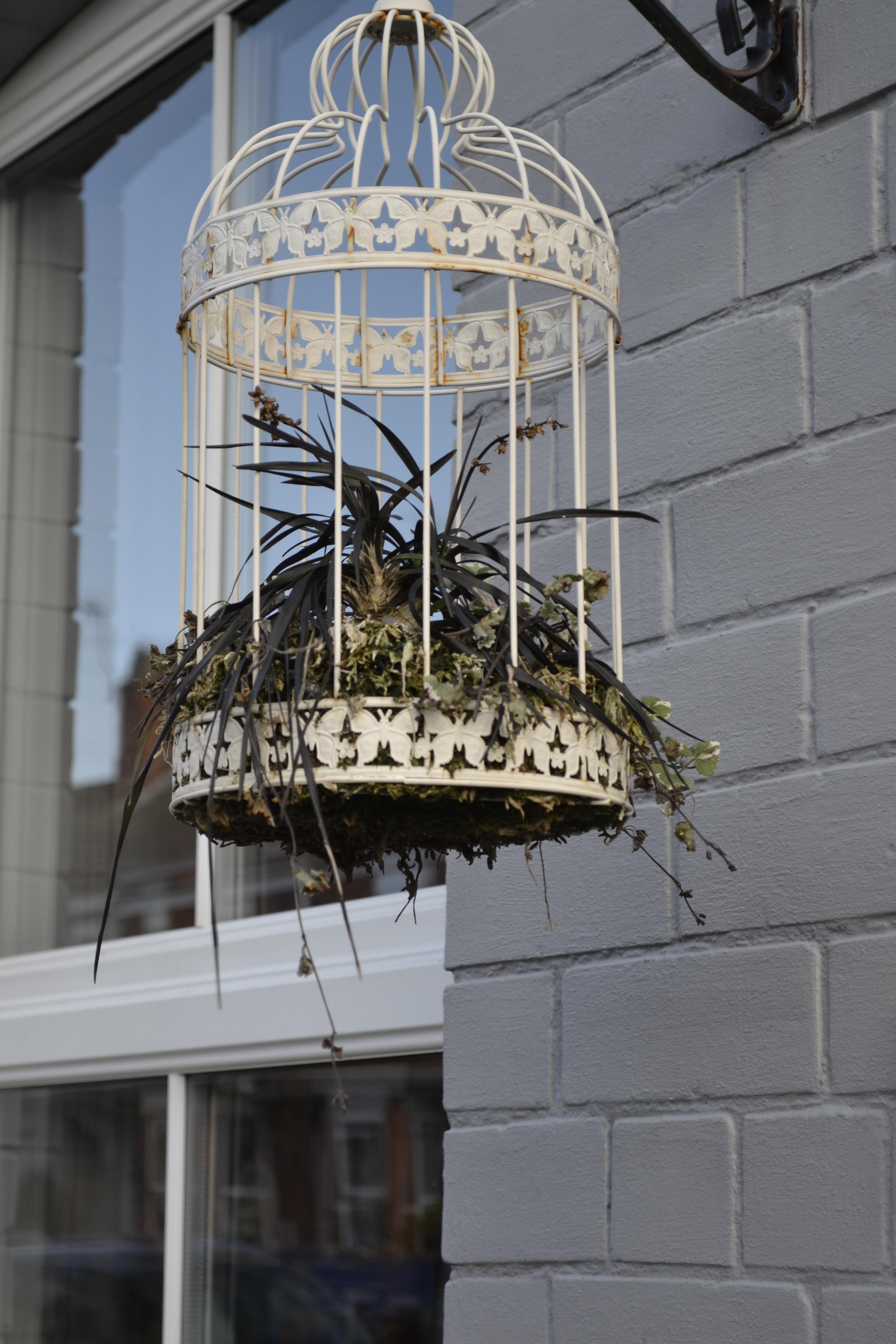 I have selected concrete steppings stones in the shape of log cuts. They aren’t the fanciest but they will gradually be surrounded by the plants. Each is slightly different so it doesn’t look too uniform. 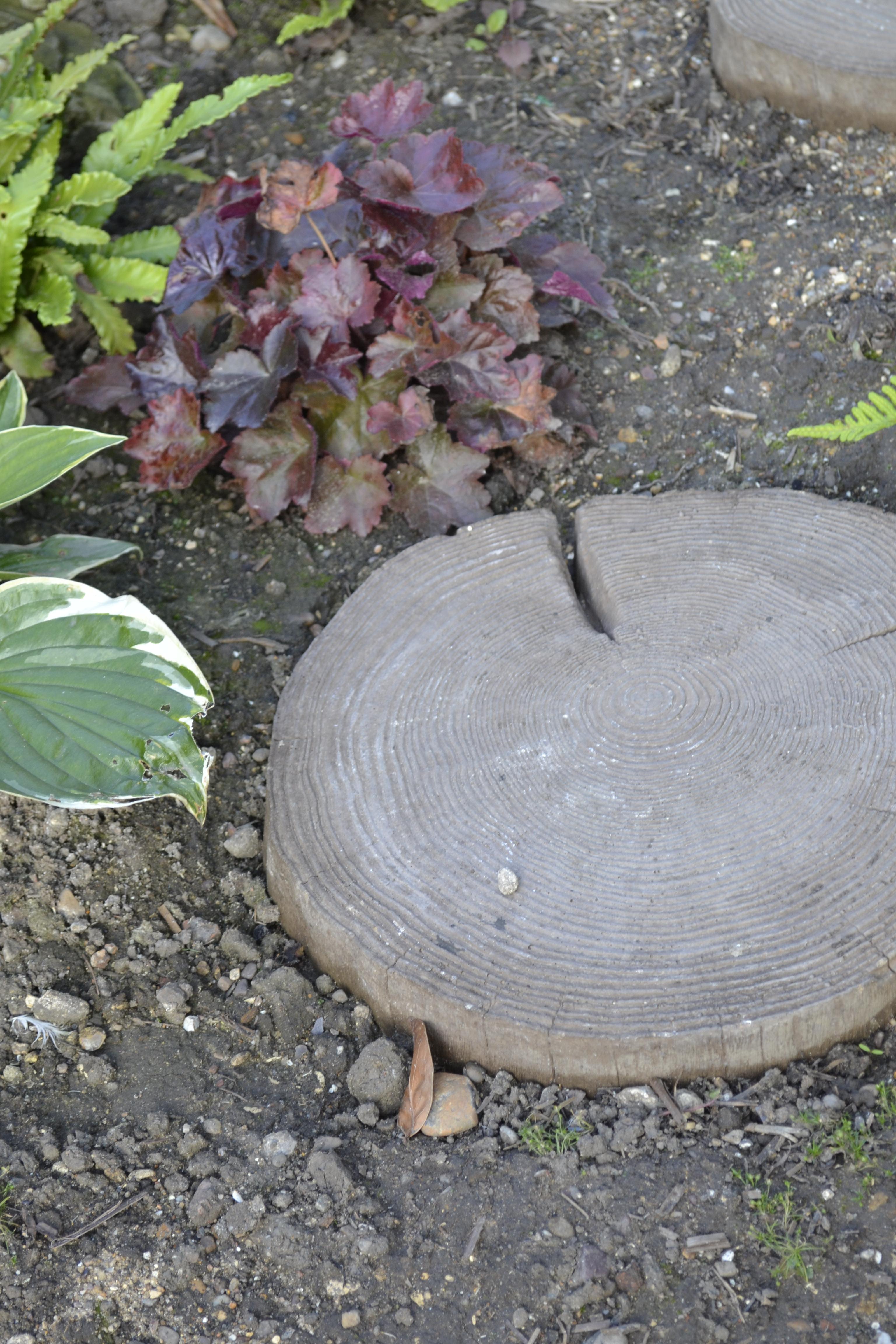 Now I have an idea of where the stones are going and the path is done I’ve added some more plants. The hostas are mostly hosta fortuneii. These were bought for £1 or £2 in Winter on sale when they look like a pot of dead growth. I’m also taking a chance on placing the aspidistra outside. This has come from my classroom but I don’t have space for it in my next year’s classroom. I’m hoping close to the house it will have enough warmth to survive. My China Moon aspidistra in the back garden survived last winter so hopefully, this will too. 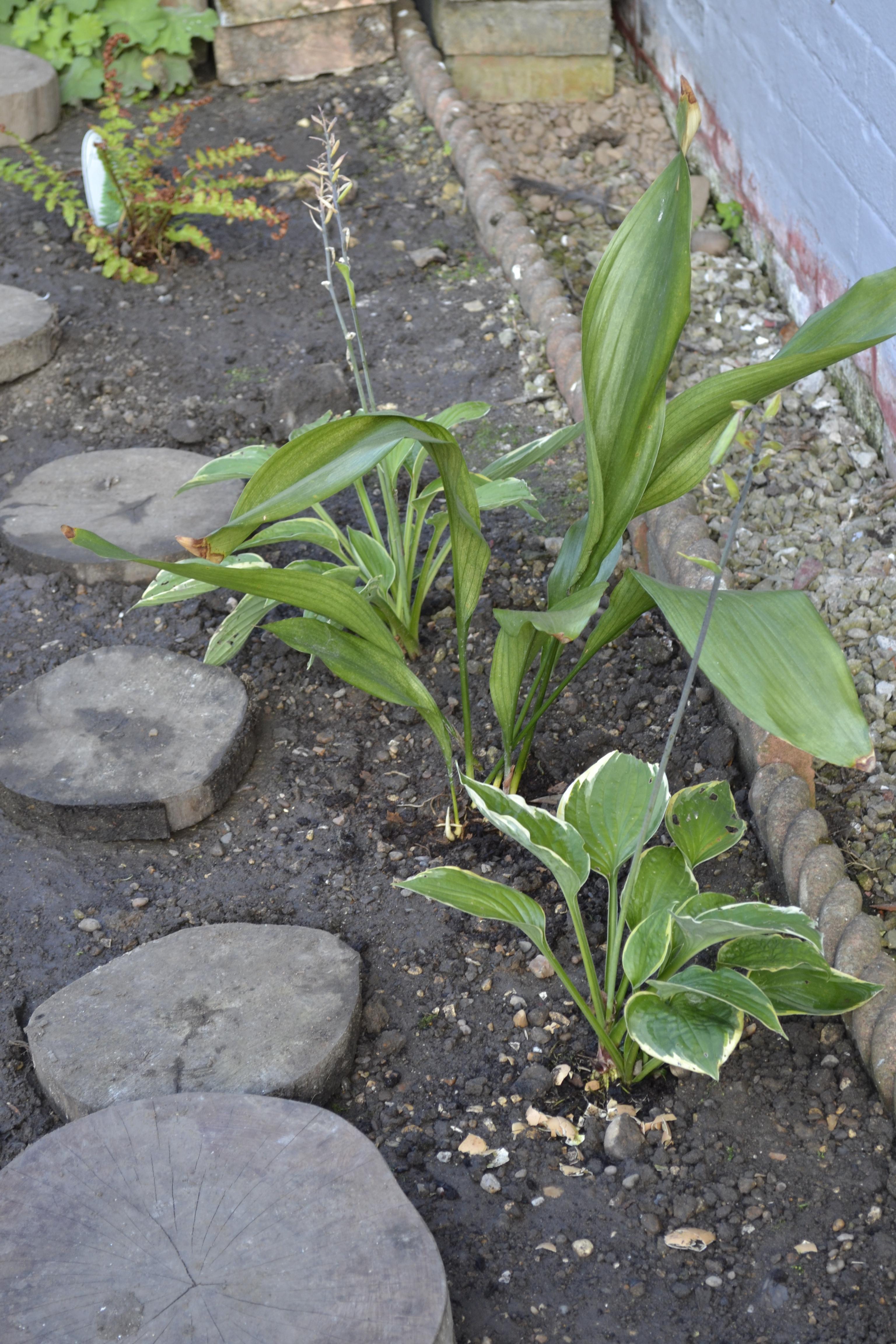 A few more ferns have been added. These are mainly wispier varieties like Dryopteris and Polystichum. I’m not sure how these will cope with the sea winds so I’m going to need to keep them well watered initially and we’ll see how they go. So far I’ve mainly planted varieties like Asplenium with wider fronds that can cope with the winds. 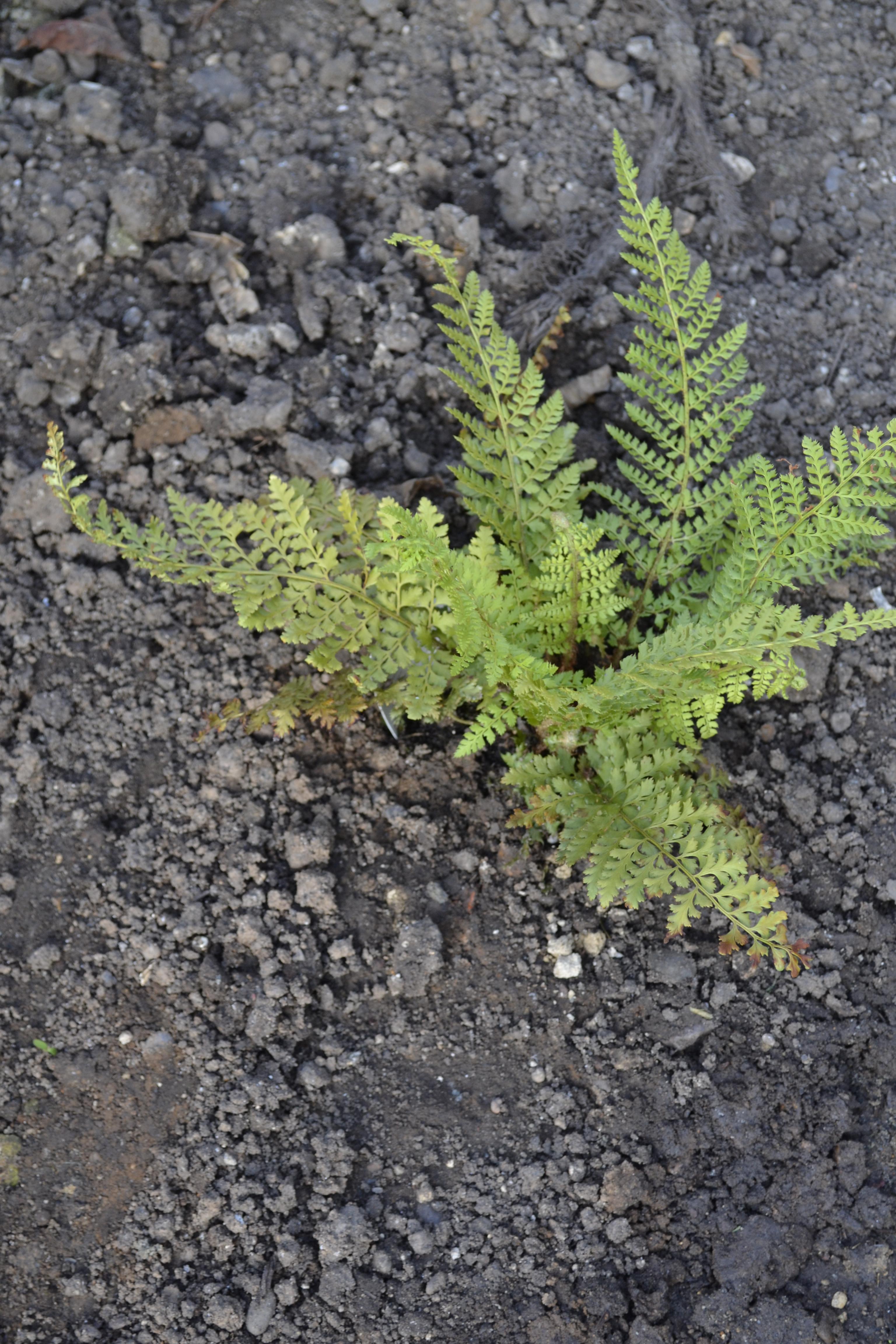 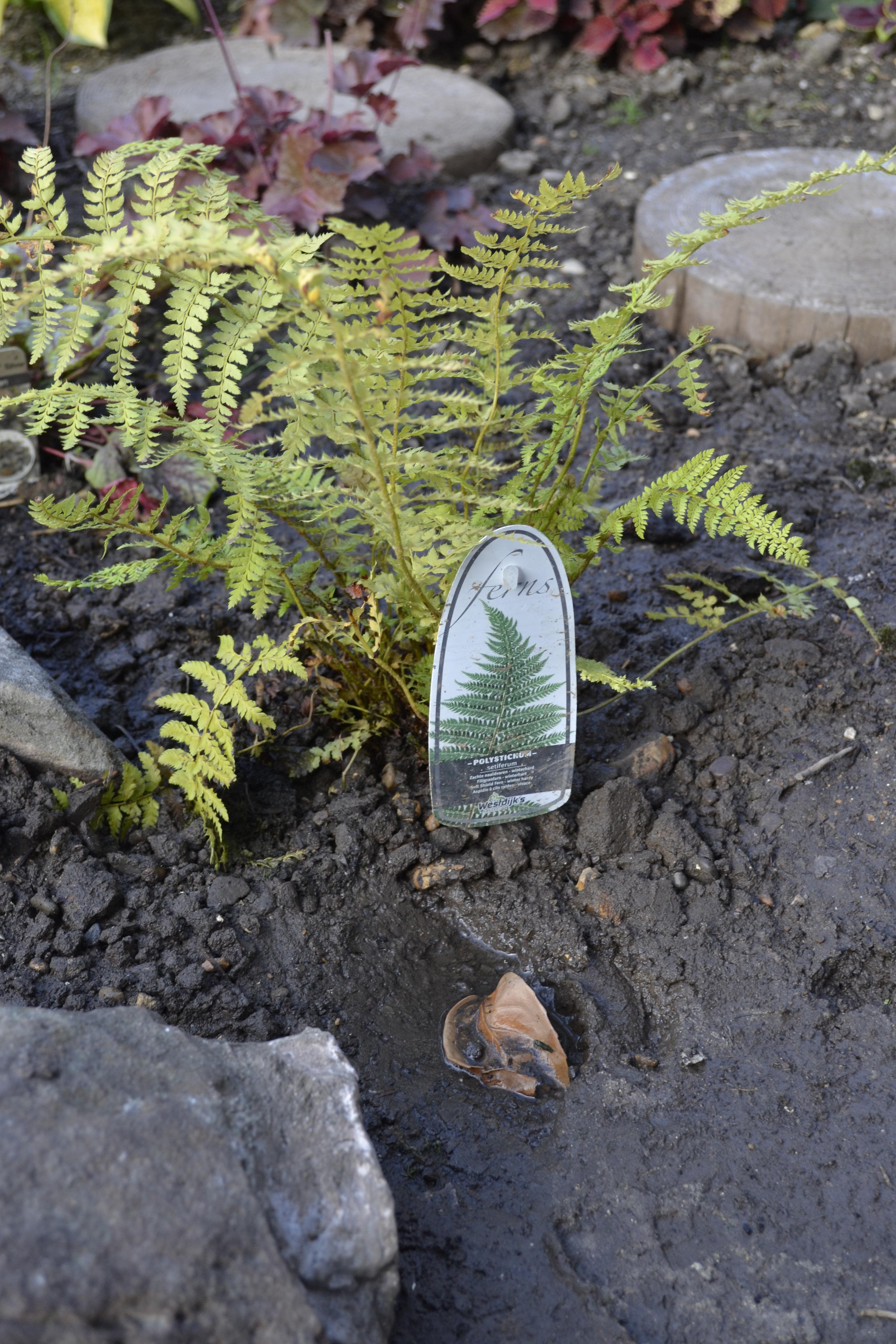 The water butt has proved invaluable since installing it. I have been able to manage the majority of the watering over the Summer from just this saving me carrying water through the house. We have had quite a wet Summer, but still very helpful while I’m getting plants established. Even small downpours have helped fill it back up. It has been a bit smelly a few times so I’ve added an antimicrobial disc to see if that helps. 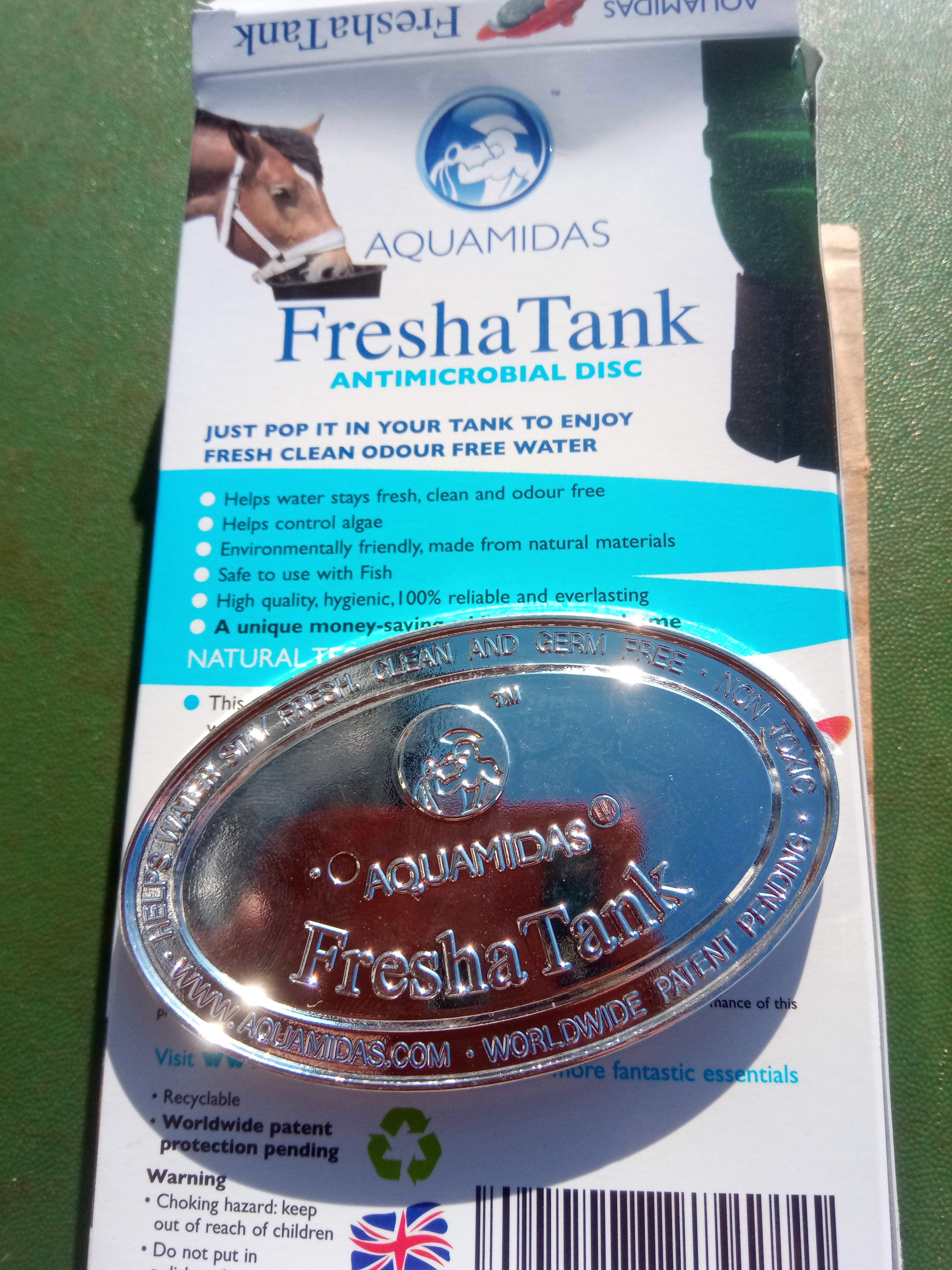 The frogs have been sheltering under the bricks and tile the butt is resting on. A well-shaded spot for them. They’ll hopefully return the favour by eating the slugs to protect my hostas. 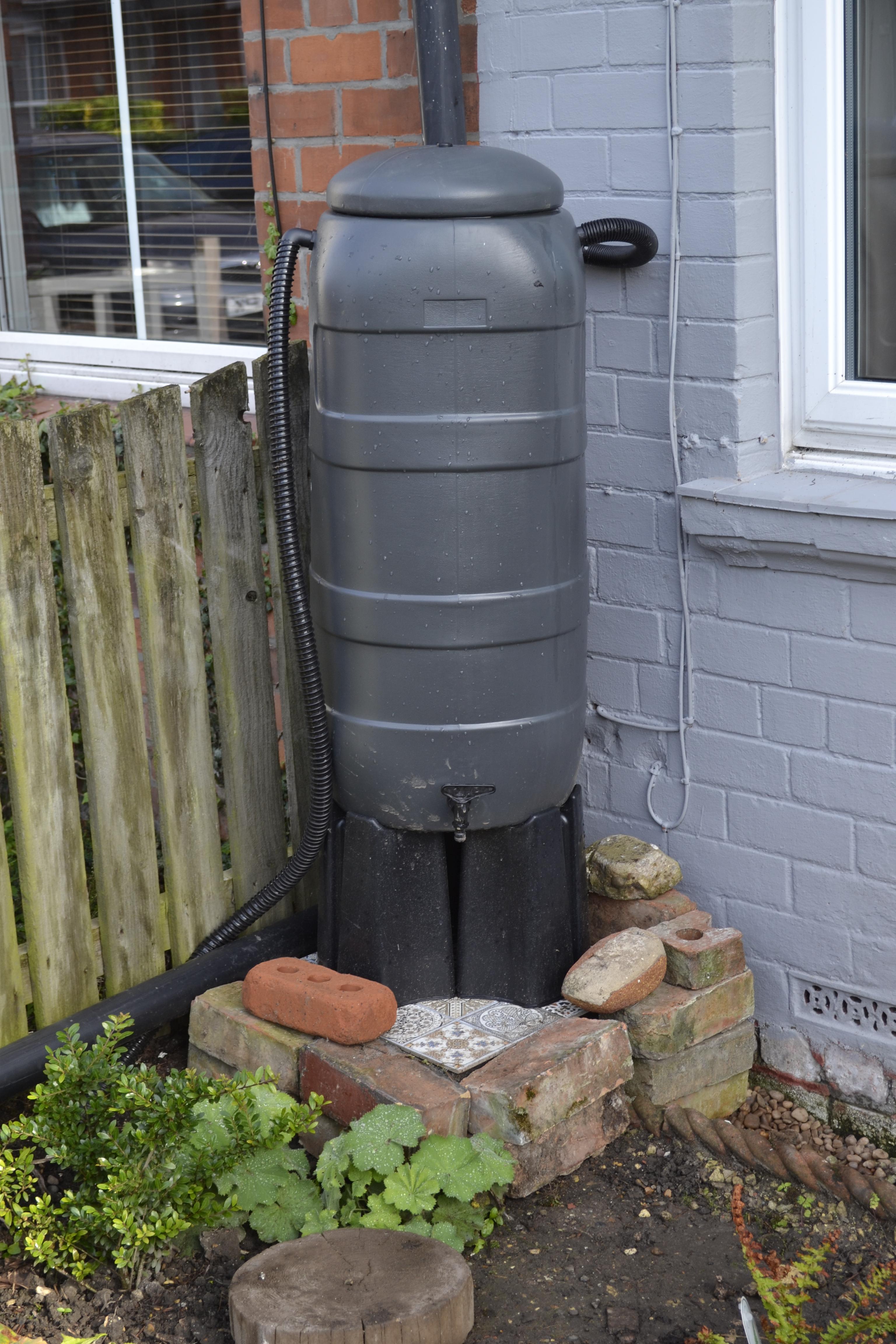 The limelight has filled out nicely over its first Summer. It is a bit floppy but it will start to thicken out over the next few years. The flowers have been great and far more than I expected in this first year. Not as spectacular as the paniculata hydrangeas we saw at Exbury but a good start. 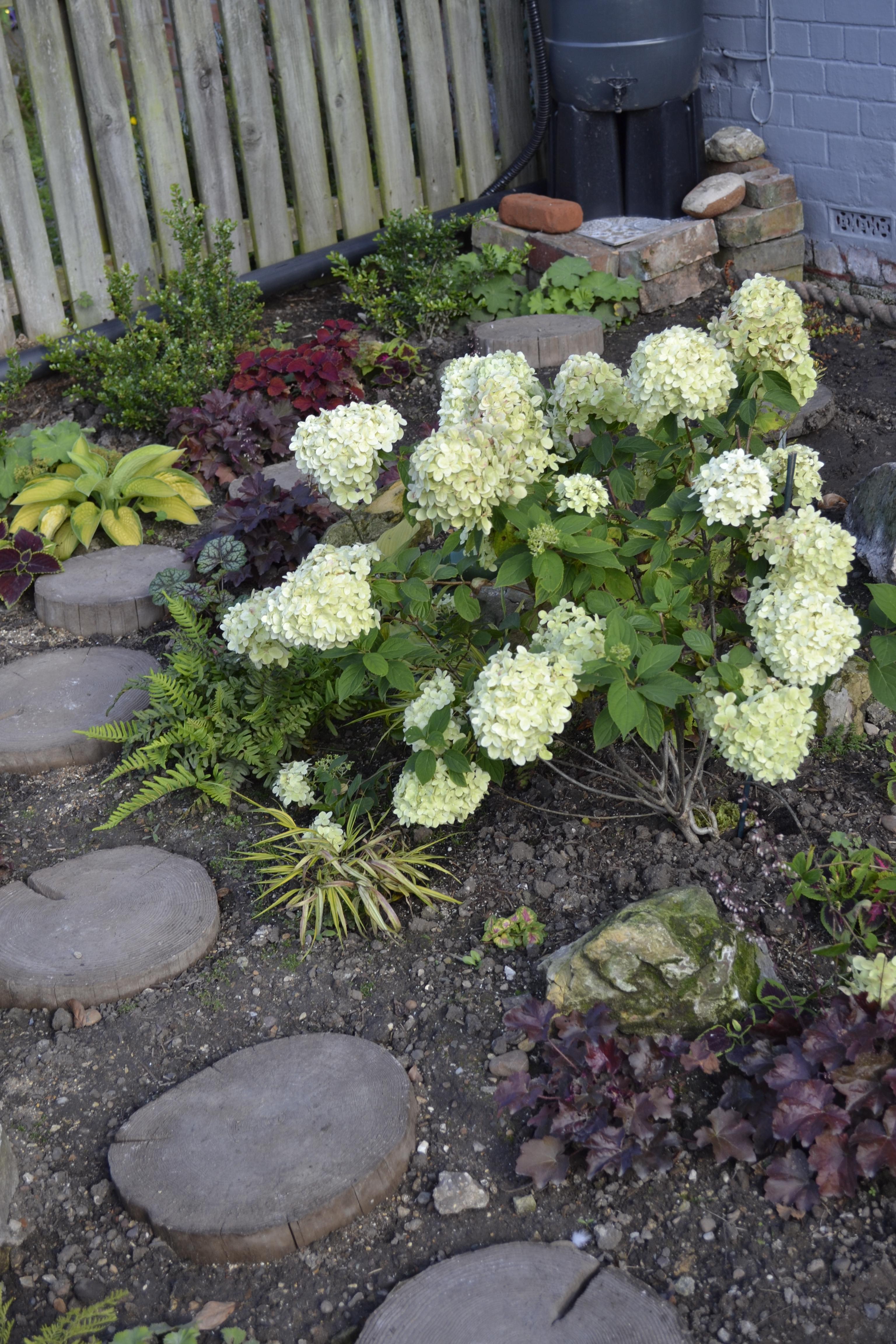 It is starting to gain the pink tinge before it browns off. 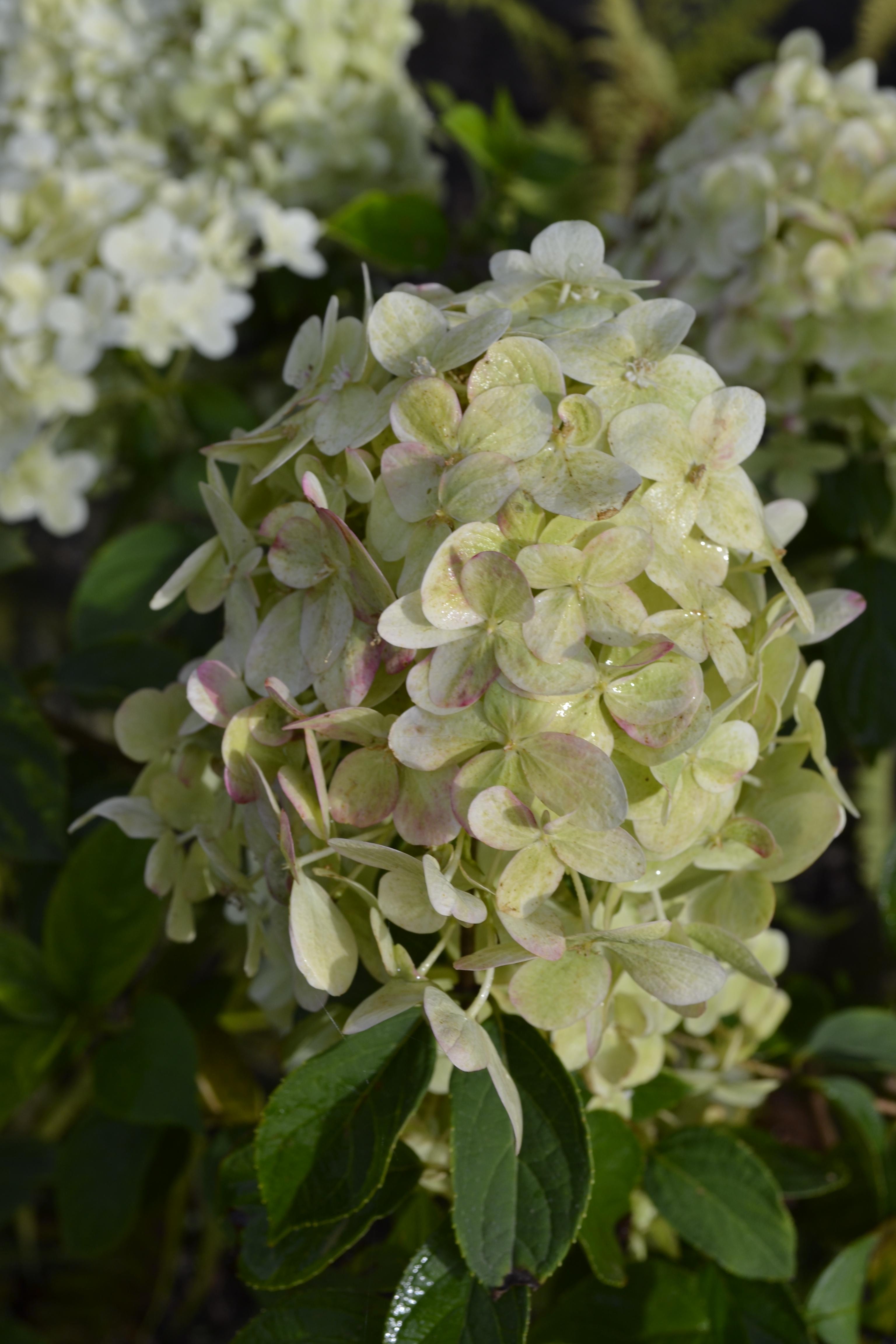 Alice helped briefly before she lost interest. She enjoyed herself until she got her dress wet then she wanted to go in. Amy and Alice returned to supervise later and check I wasn’t doing anything stupid. 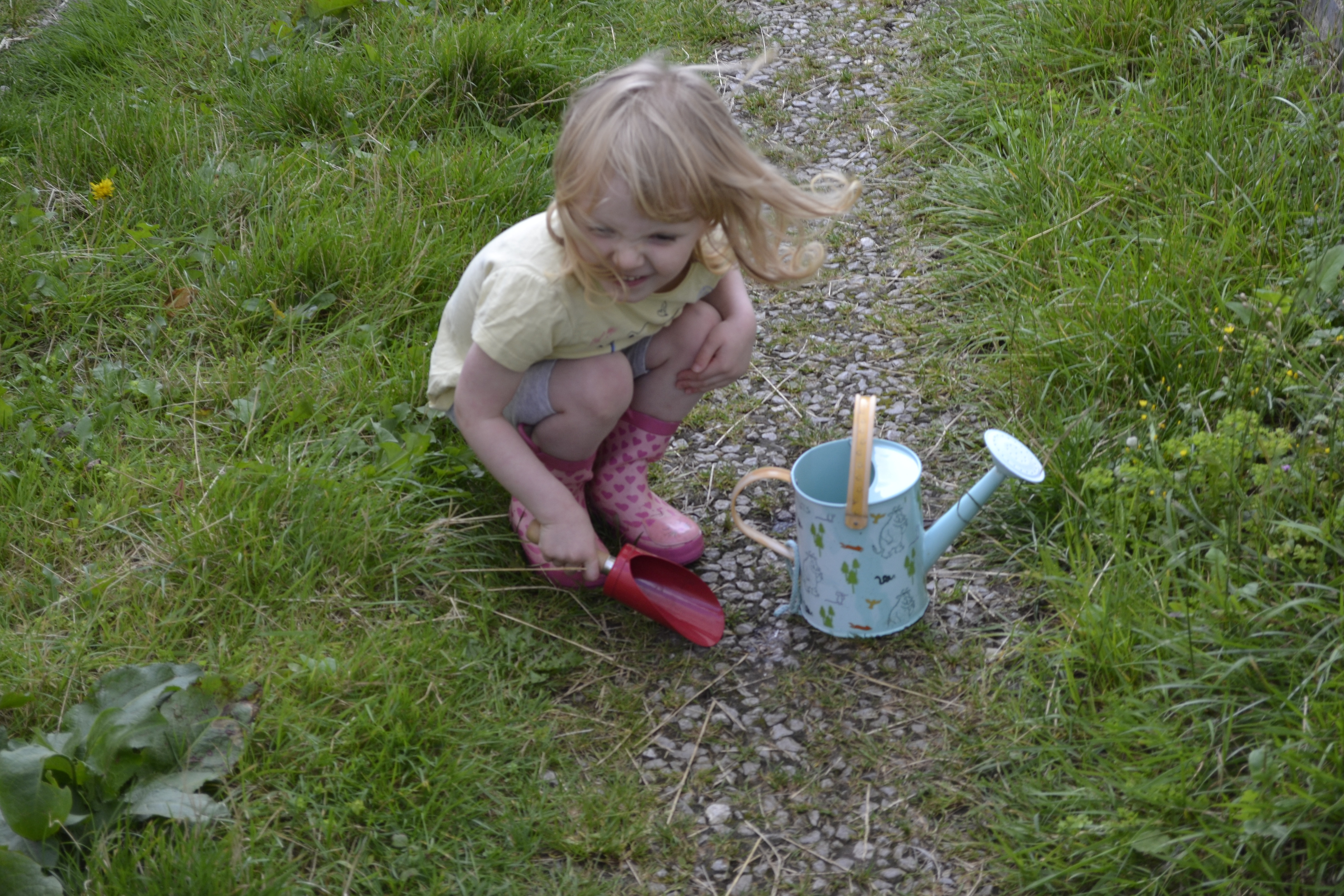 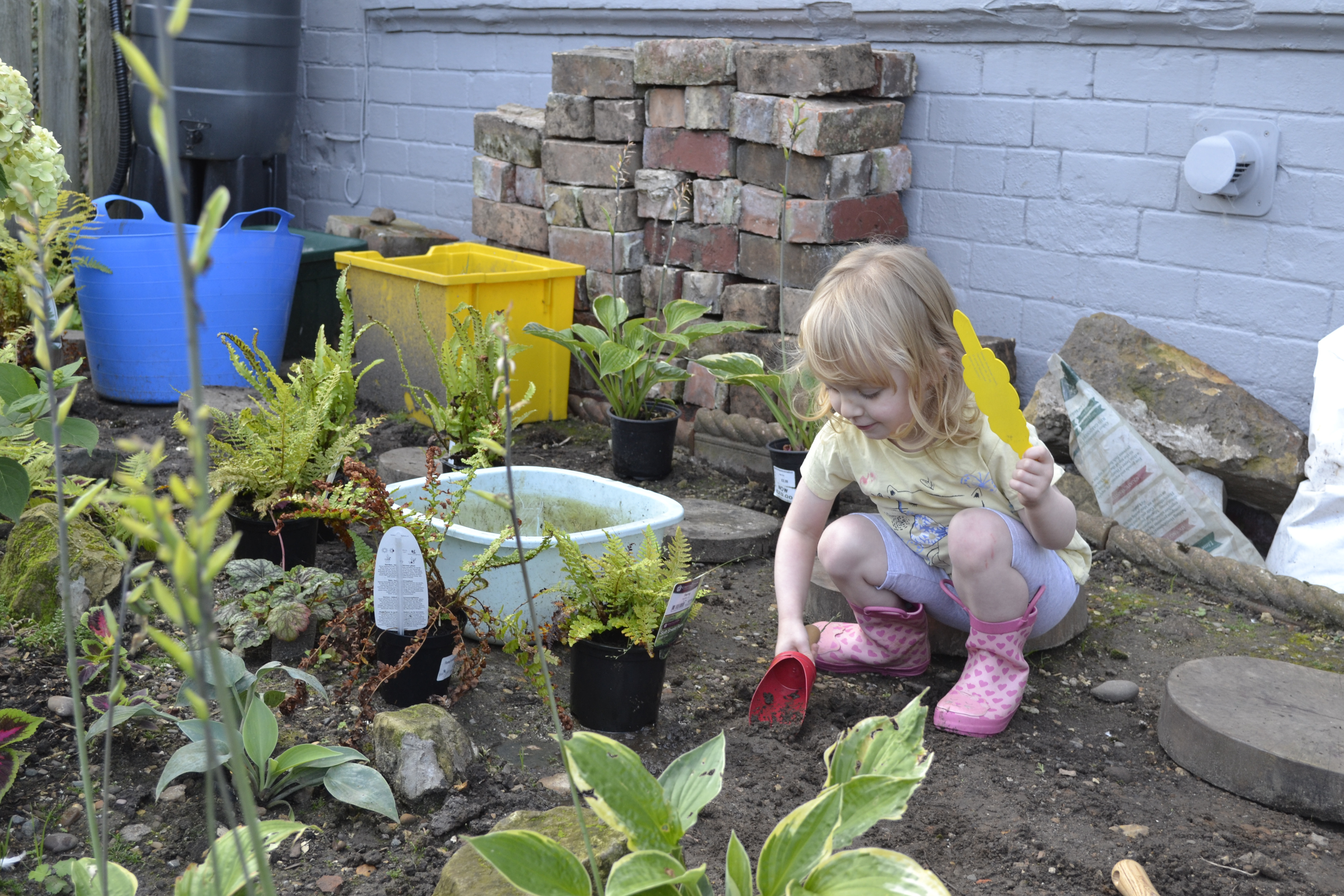 There is still more work to go and it will be a few years to fill out but I’m happy with the progress so far. The next big job will be edging the path to stop soil going onto the path. Then I have some ophiopogon to plant along the edge to keep it smart. Then I’m probably going to put bark down to improve the soil conditions, suppress weeds and help moisture retention. For months I’ve had plants sat on the patio at the back but now they’ve largely been planted I can set my mind to arranging the remaining pots. 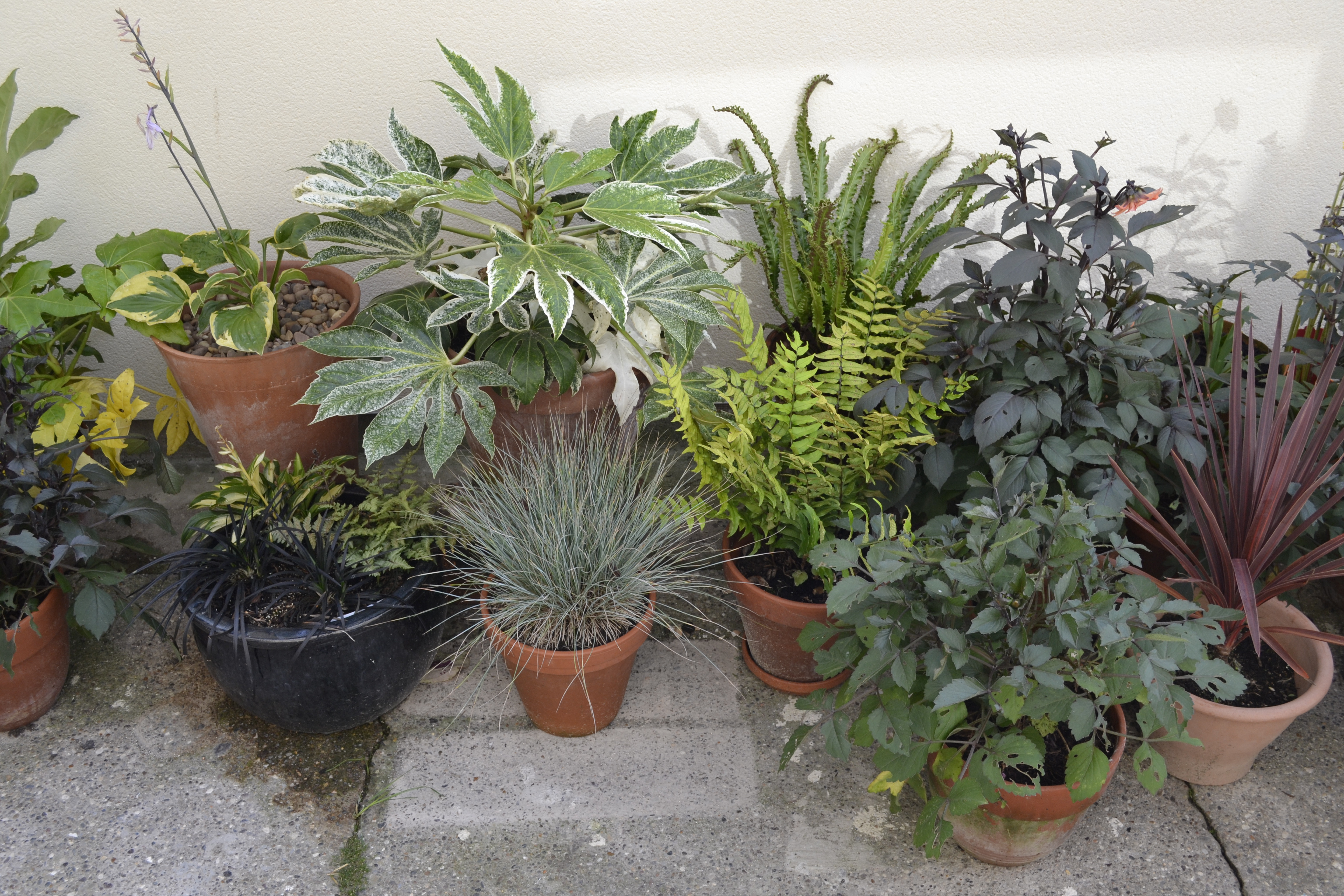