It is holiday time for me as a teacher. Got through another year. Now I get six weeks to catch up on weeding and enjoy the garden. But in true holiday fashion, it’s raining. But the water butts are getting refilled at least. I’ve been using the new butts for most of the watering at the front and to do the patio pots at the back. They’d just run out the last few days. Lasted pretty well.

These lilies came from Thompson and Morgan. I’m sure they were meant to be a variety of colours but so far they are all pink. The growth has been a bit untidy as they were hidden away during building work. They probably would have benefited from staking and being rotated with the sun but the flowers are a nice bright burst. These tall pots are designed for lilies but I think I might change to hostas after these are done. They look good spilling out of tall pots and keeps the snails off a bit. 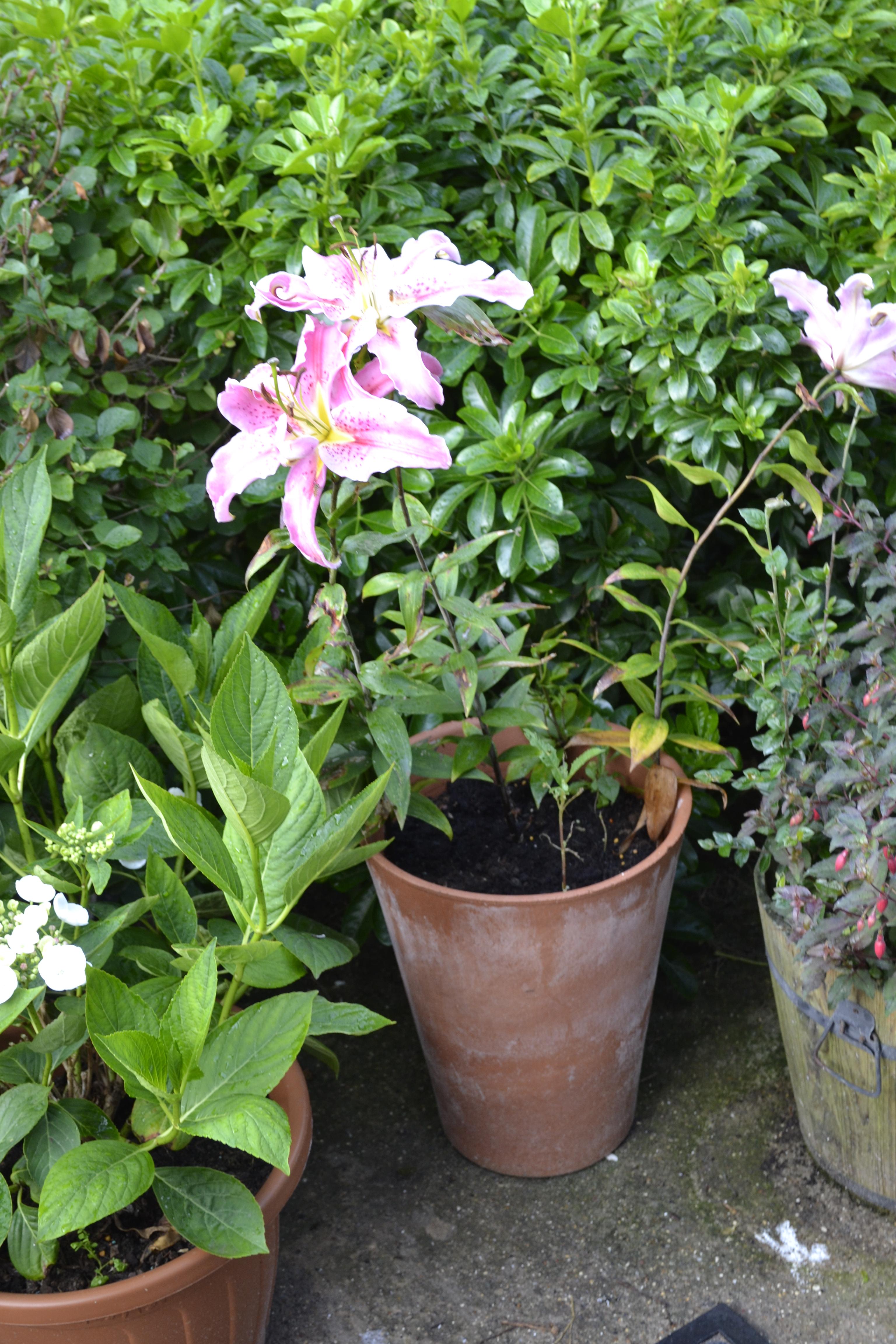 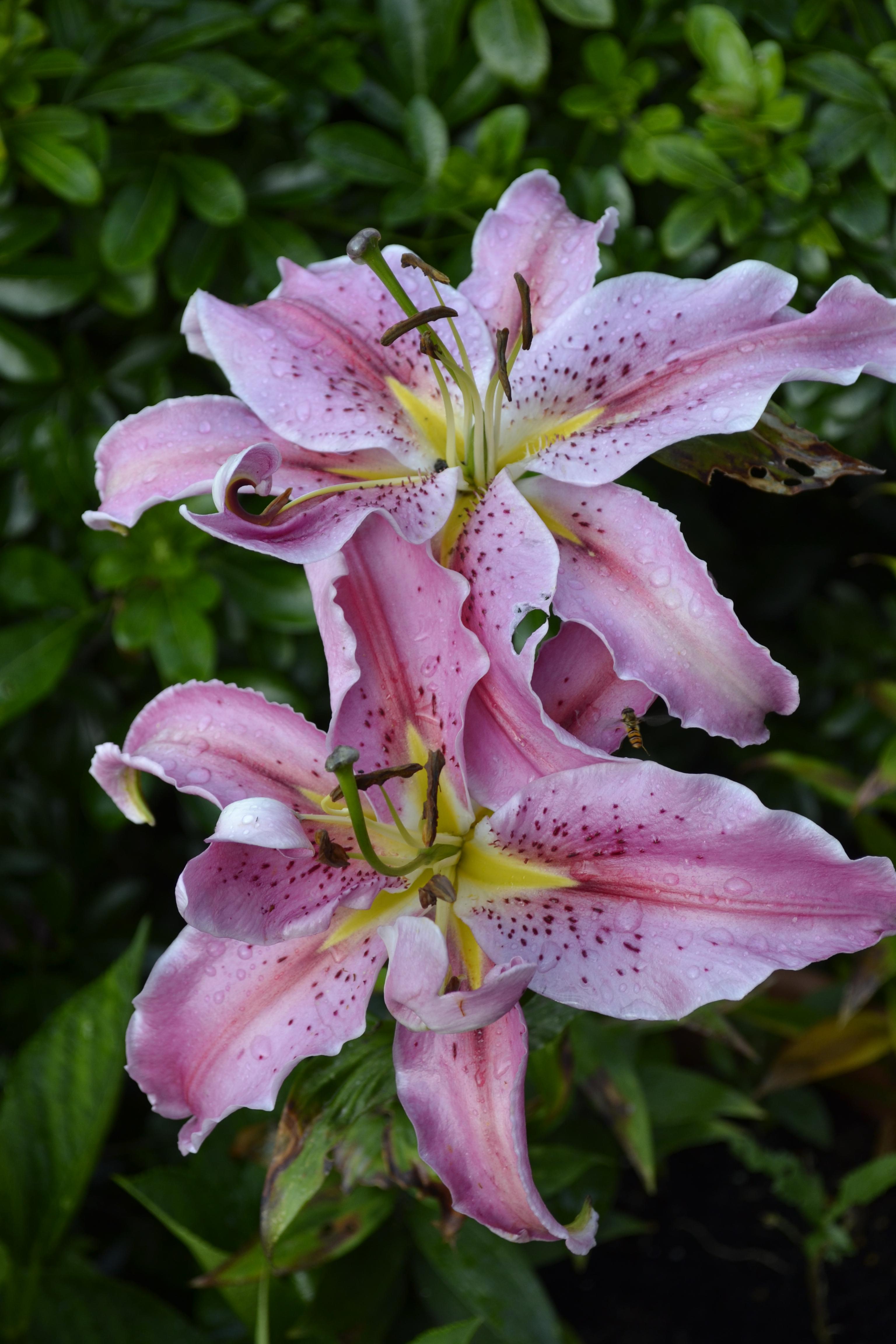 I removed a lot of the lavender in the border as it had got leggy in a shaded position. I’ve kept a few in pots. My soil is heavy clay and not suited to lavender. In the pots, I can make the compost with lots of grit and sand to give it the drainage it needs. These pots have thrived for three years now. Very good for wildlife. When in full flower it gets lots of visitors. 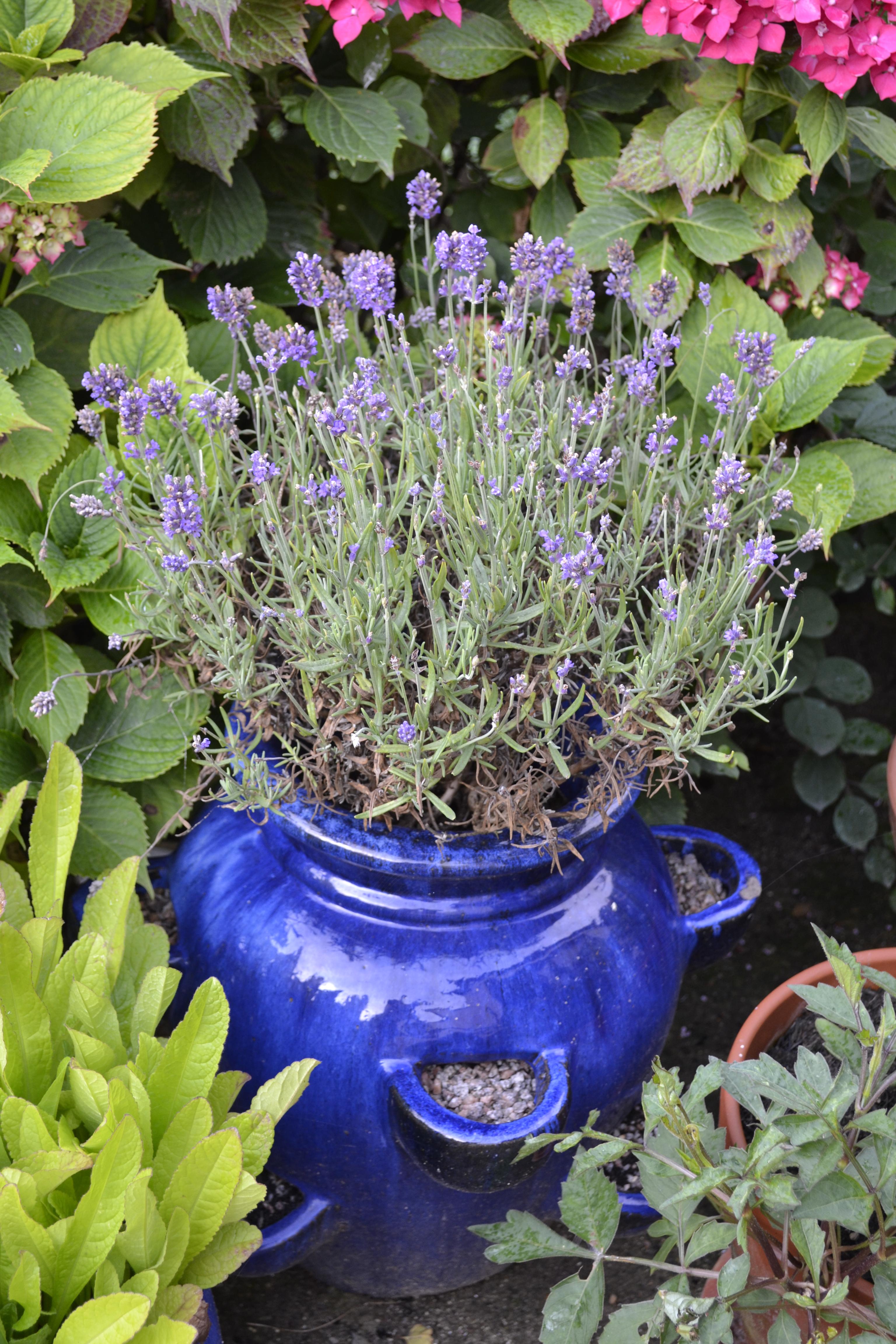 I got these two little Acer’s for £5 from Thompson & Morgan. Acer palmatum ‘Atropurpureum is a purple-leaved variety turning to orange in Autumn. Then the orange dream is yellow turning again to orange for more Autumn interest. These are tiny at the moment and will probably go in pots for now. The couple I’ve got already suffer from leaf scorch with the strong sea winds so I have to keep them sheltered. They are an example of wrong plant wrong place but I like them enough that I’ve persisted trying to find the right place for them and planting shelter for them. While these two don’t look like much currently I’ve got the patience to see them grow gradually. 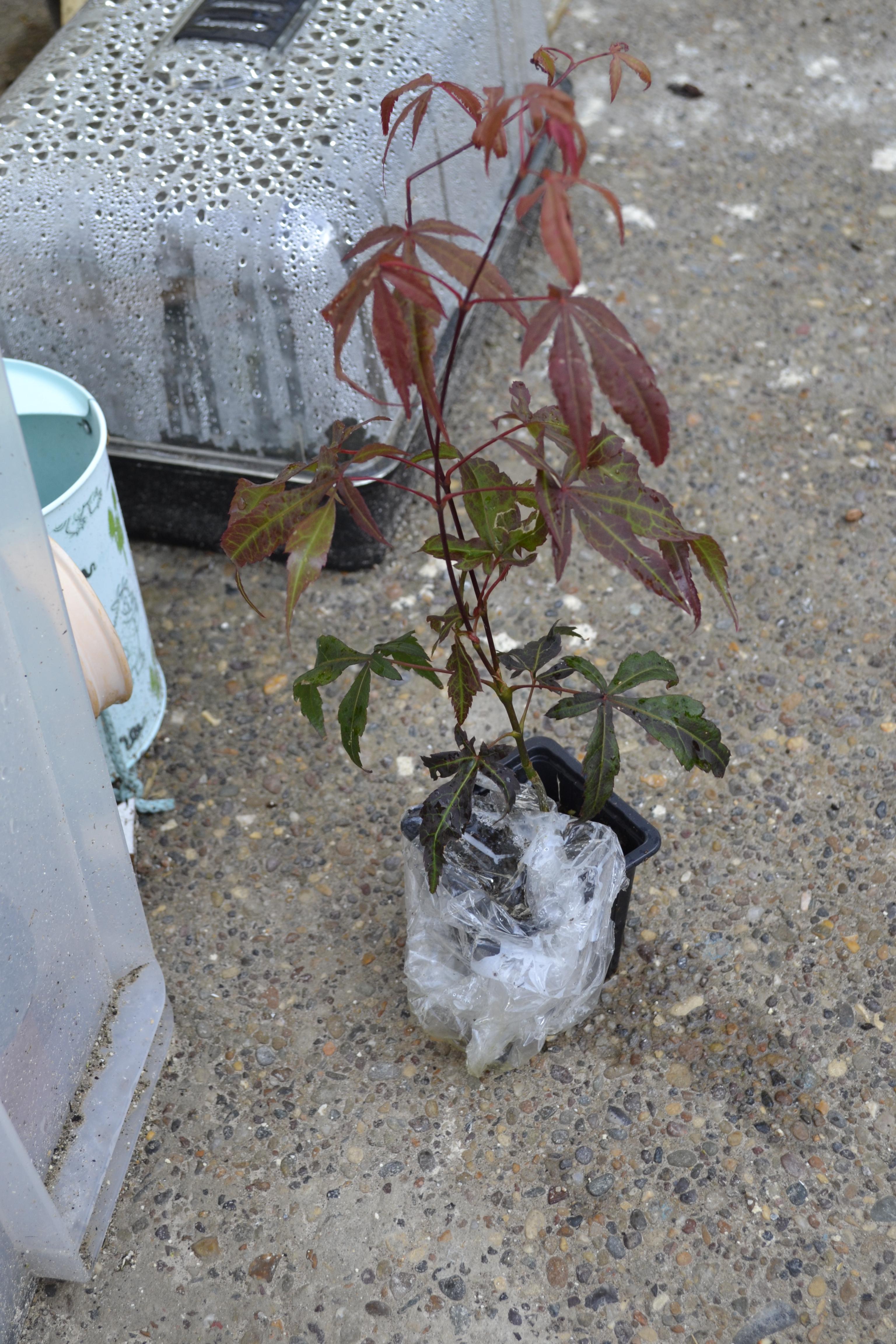 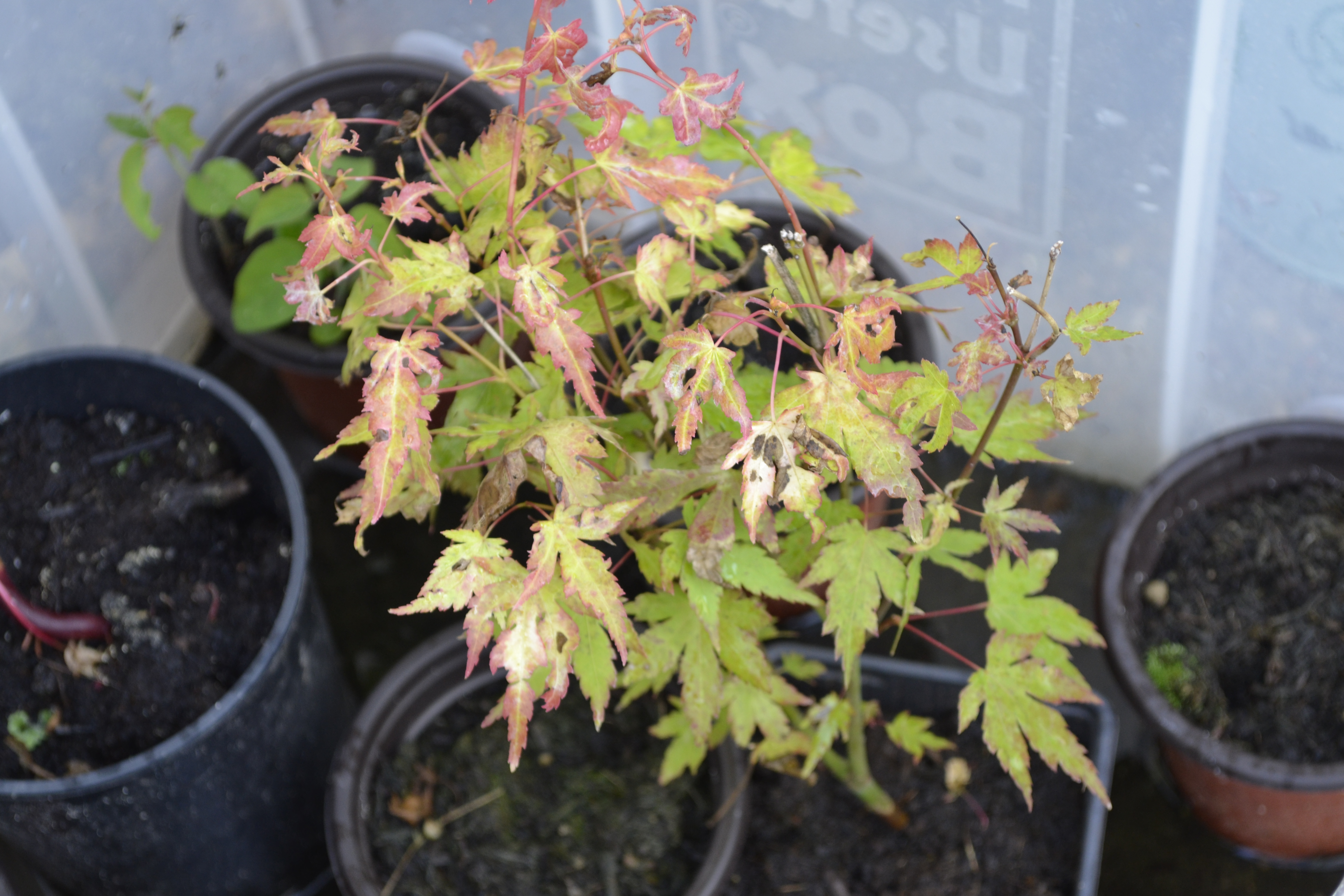 Alice has been a bit obsessed with filling the water bath but the seagulls are appreciating her efforts. 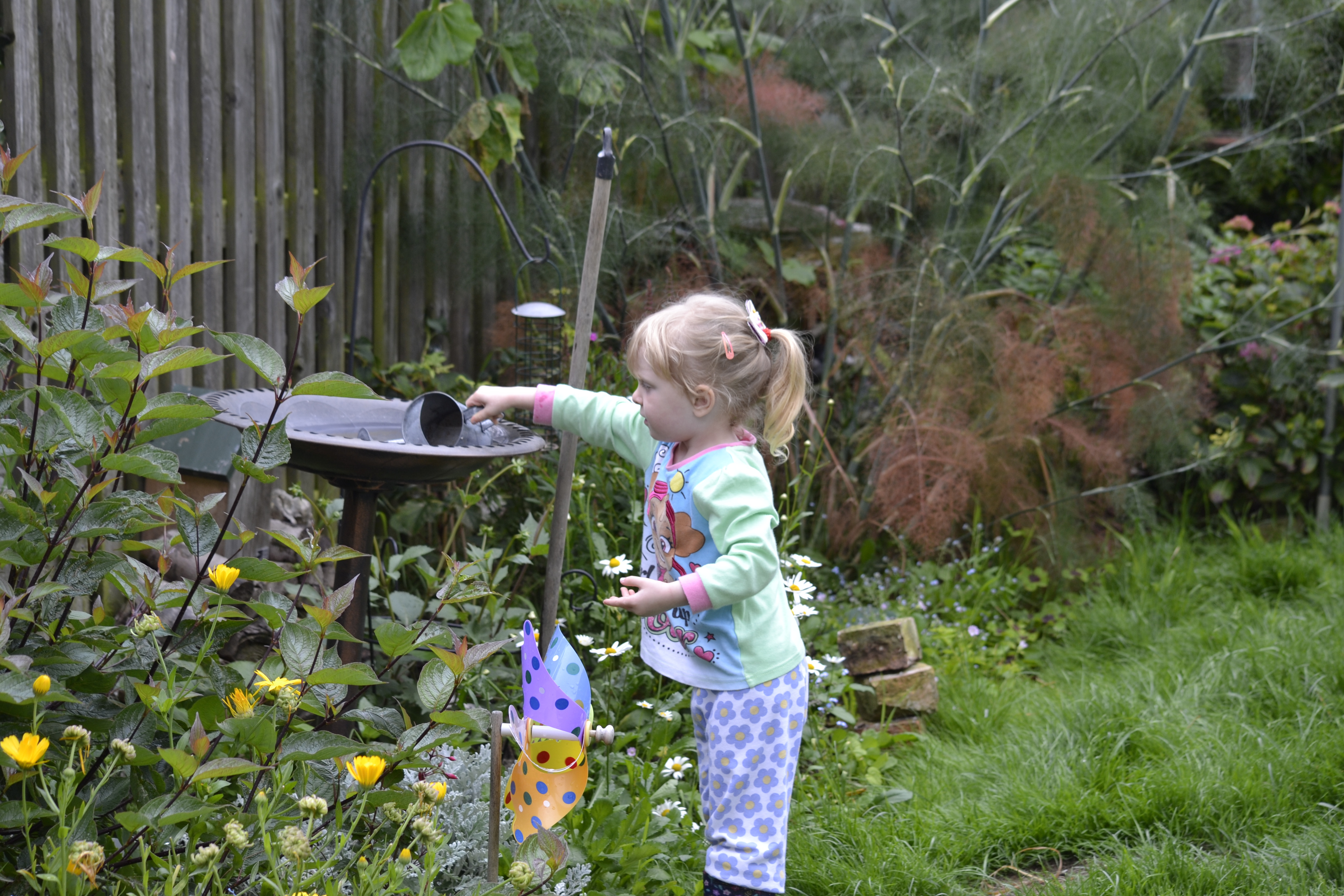 I sowed the seeds for these quite late on and they’ve been drowned by other growth. Some are poking out though. A lovely flower to photograph. 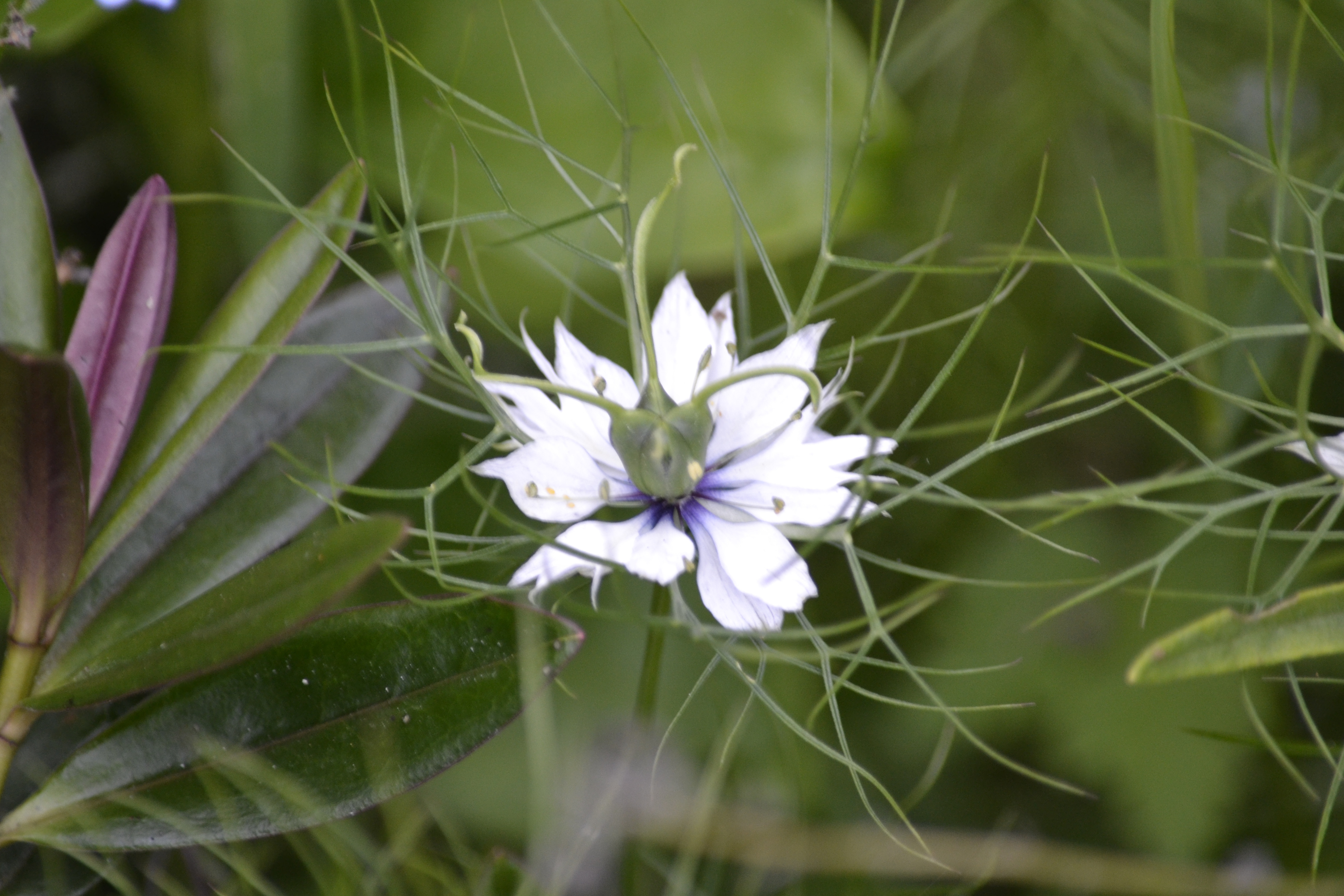 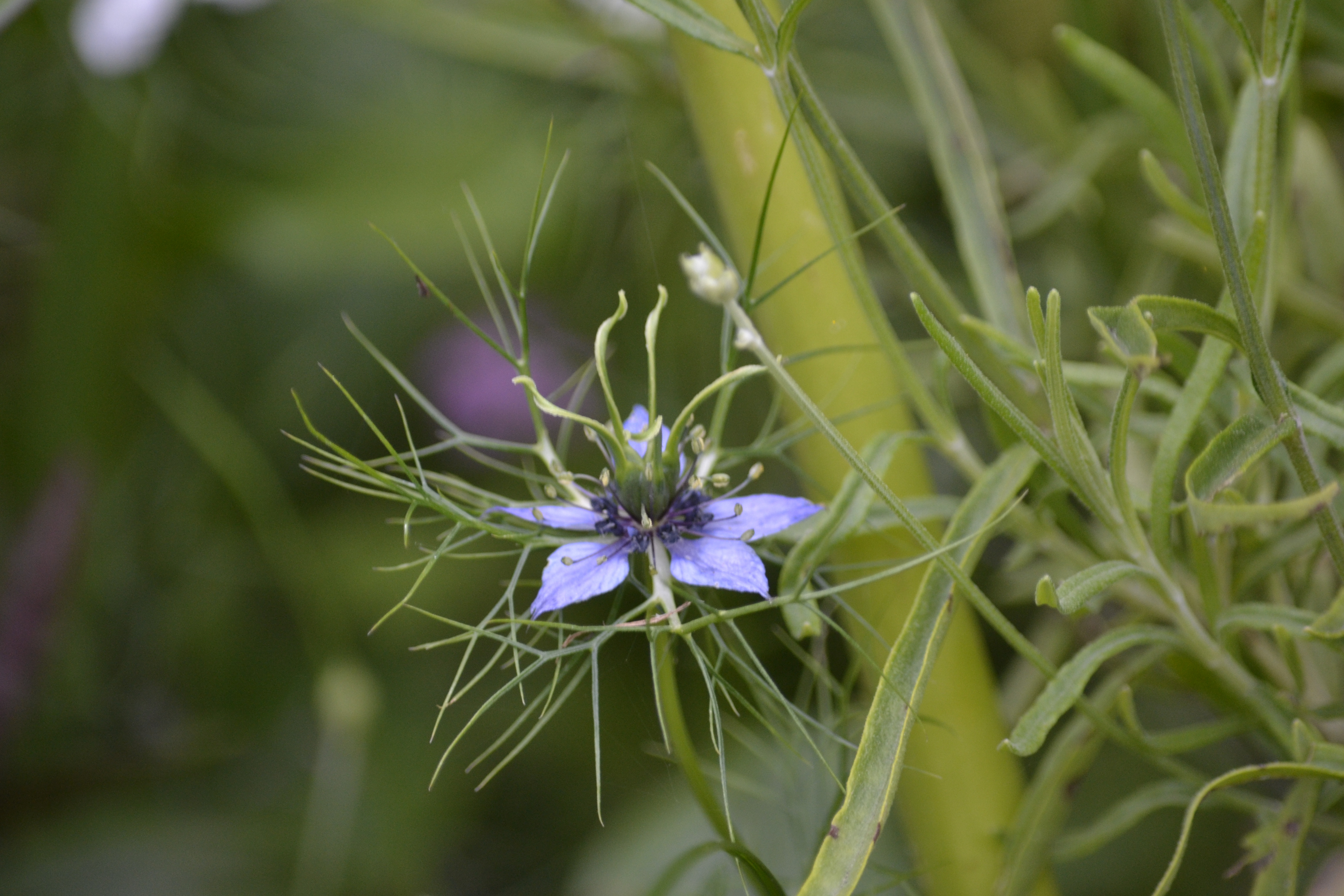 This pretty lacecap was a birthday present. It suffered a bit from frost’s and wind but with plenty of watering it picked up again beautifully. I don’t normally use plastic pots but I thought with the thirsty nature of hydrangeas this would benefit from a plastic pot. This pot is meant to be a self-watering pot. It has a reservoir set up at the bottom so it doesn’t all drain out. The flowers are a bit sparse, but only the first year, though looking lovely. I’ve moved it to the pride position outside the back door so we see lots of it. The limelights planted this year are set to flower as well. Lots of hydrangea love this year! 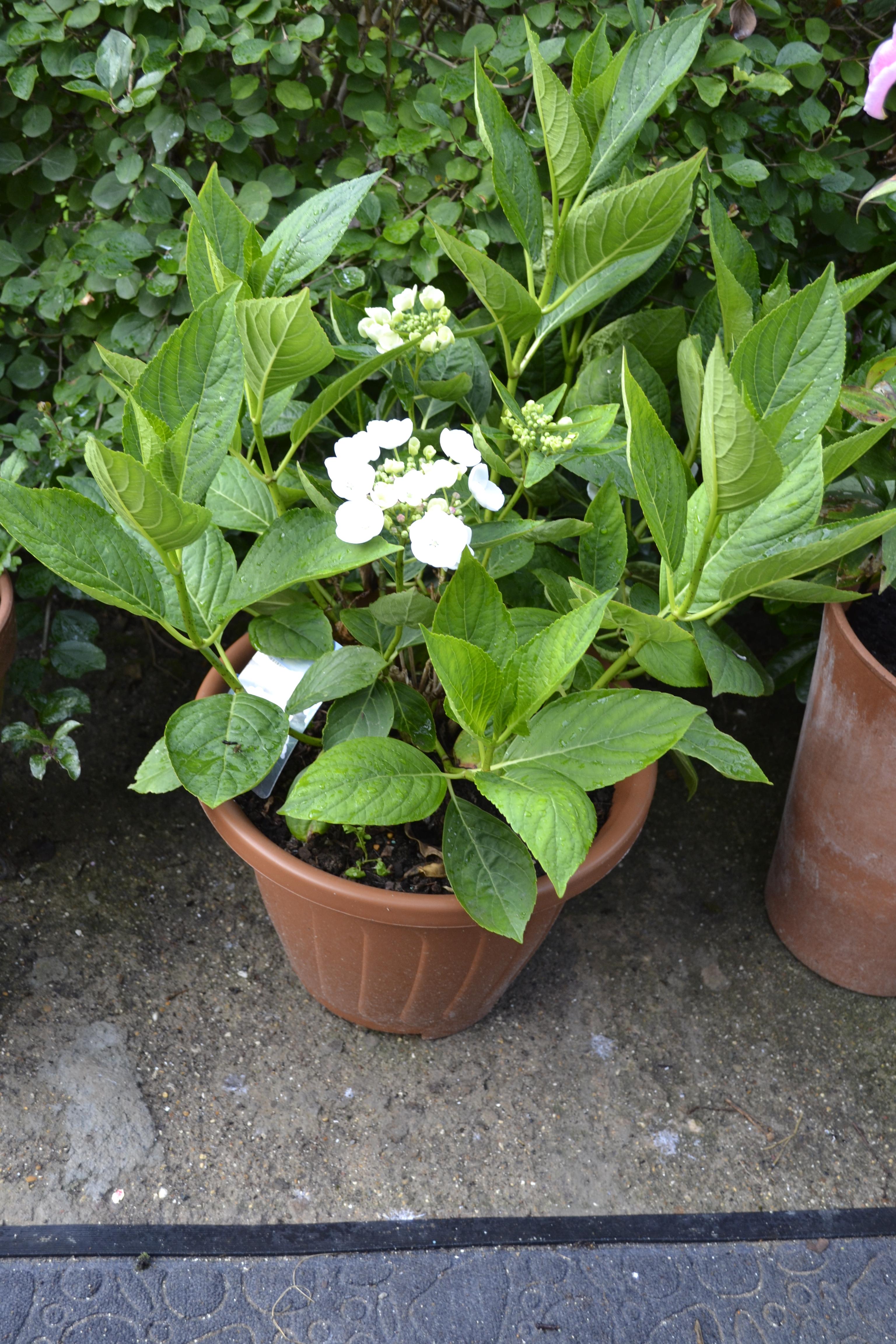 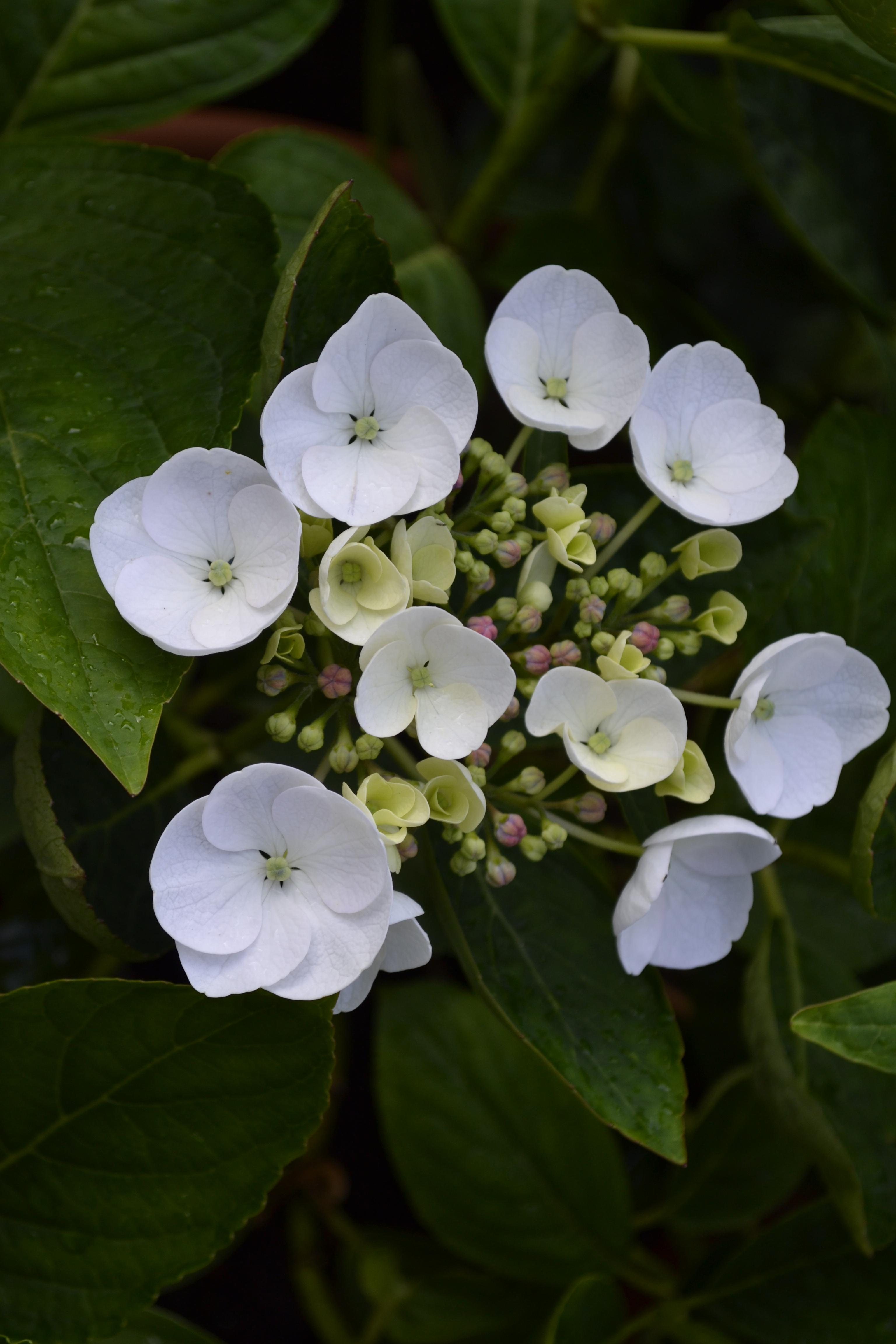 Today is Hornsea carnival. We’ll probably head out later if the weather holds. There will be a float parade and rides and fairground games in the park, then usually a few craft stall. So probably won’t get up to much in the garden today. On a side note, Alice had her first sporting victory this week at the nursery sports day. Very proud of her.