Well, the last week has been dominated by rain and doesn’t look like we’ll get much time in the garden this weekend. But it’s helping reestablish the lawn again after building work. It’s time to look at my six. If you fancy taking part in six on Saturday check the participant guide.

It’s a while since I did the view from above. The view shows you my worn lawn. The builders had boards and we had to move some of the patio furniture and pots onto the lawn so I’ve been working repairing it. The ground has been spiked and new grass seed has been put on. I could do with adding a layer of topsoil but I haven’t managed a trip to get some yet. The rain is helping a lot and I can see some shoots in the bare patches.

It also shows lots of the plants flopping over under the weight of the rain. I’ve managed to stake a few but got some more work to do. The foxgloves and chives down at the bottom near the blue bench are very curvy.

This allium is rather spectacular. Like a firework mid-explosion. I’ve got three near it’s other. They are under quite a bit of strain with the rain. But still very interesting alliums. However, I found out that these are bulbs at their peak. They sold at the peak and then subsequent years they will diminish. So if I wanted this show each year I would need to replace them each year. One to look for in the bargain bins next year. They are a bit lost in the sea of forget-me-nots. I think they’d probably benefit from being in either a clear space of having something dark leaved around them.

This poor little aeonium has suffered a lot. It was given to us by my brother in law as a tiny cutting. It was left out through the beast from the East and survived with a few leaves. This year I brought it in where it then suffered from lack of light instead. I supplemented the light with grow lights in the evenings but it still looked unhappy. I moved it back outside last time and is looking much happier again. It is actually looking quite good currently. 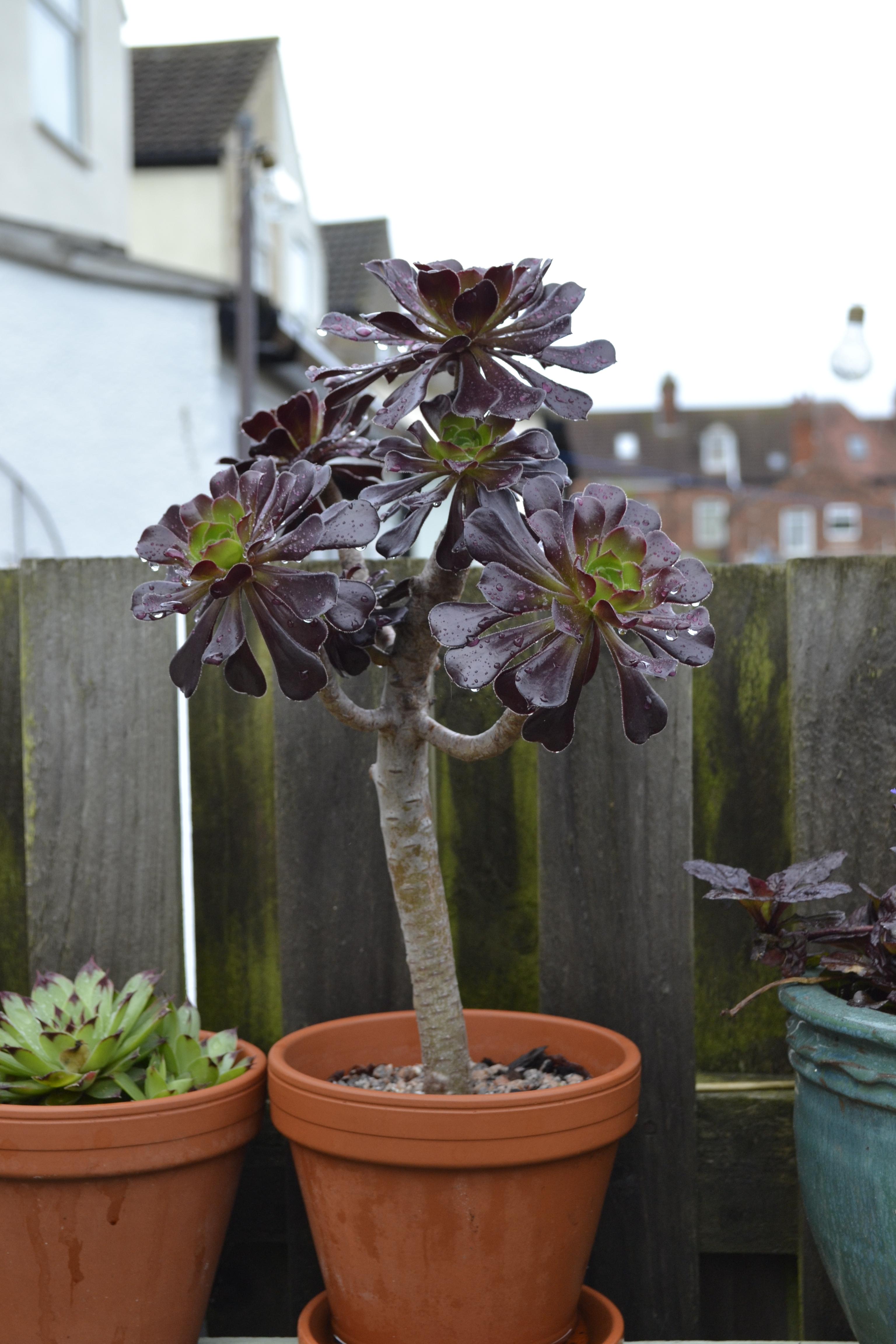 I took out a couple of shrubs last month and needed to use my pruning saw. It did the job but it had definitely seen better days. So it seemed like a good time to buy a new one as I have a few more shrubs to come out and the cherry tree could do with a little trim now the blossom has gone. I’ve bought a Japanese fixed pull saw from Japeto. Many regular readers will know I like my Niwaki purchases. Japeto has a very similar range of Japanese tools such as Hori Hori but at a lower price. They even offer a price promise if you can find similar products elsewhere. Time will tell whether it offers the same quality. It comes with a wooden sheath for wearing on the belt. I like the feel of a nice wooden handled traditional tool. I will update how it performs if the Biblical downpour ever stops.

I had a quick trip to the garden centre but as I was travelling on the bus couldn’t get much. I was hoping for some bluer leaved hostas to add more contrast in the ongoing front garden developments but they only had quite an expensive halcyon. But I did buy this little hosta. I’m planning to use this for a pot display. It only grows about 15cm but combined with a few other plants I think I can make a good combination.

At last, but by no means least, our garden has had a new resident for the last week. This seagull chick fell out of its nest last week and has been wandering back and forth between our front garden and the neighbours. Seagulls are apparently bad nest builders but will still feed their young if they fall out. I talked to the local animal rescue centre. They said to put it back if you can. As we’re not sure which of the many seagull nest it came out of and it’s too high anyway we can’t do this. The other alternative was to put in on a shed or garage roof but we don’t have any at the front so it’s had to stay on the ground. It’s been spending much of the time with the rain sheltering under a stone in my garden with an overhang and under a plastic box I’ve left for it turned over. Alice was quite taken by it but I’ve a suspicious feeling if I let her get attached to it we’ll end up with a house like Gerald Durrell’s childhood.

Well, that’s it for this week. Check out other peoples sixes through the Twitter hashtag #sixonsaturday or through the Props blog. It isn’t looking hopeful for doing much gardening this weekend but I am going to try and fit the overflow pipe to the front garden water butt. With all the rain it has been overflowing. But this is helping give the new plants a good watering. Hope you all enjoy your weekends!