The front garden has moved on a bit further. Yesterday the heavens opened and it rained turning the garden into a pond. The new water butt was overflowing so waterproof trousers and wellies went on and I went out. I emptied the top 1/4 of the butts water onto newly planted shrubs. By this point, the rain was only coming down lightly and as the ground was soft I thought I’d take advantage and try and get a few more plants in.

I’d mentioned in the last update that the ground was solid compressed clay. This has been churned in with the mattock. I’ve dug in some calcified seaweed and some Dalefoot compost. This is supposed to help improve soil structure aiding root growth. I’m planting mainly for foliage. I’ve selected a variety of plants to give different colours, shapes and forms making the garden more about textures than about flowers. As it fills out it should become less maintenance with many of the plants helping suppress the weeds.

We’ve had a quote on getting the path replaced and he thinks he can do this before the end of the month. We also want to do a bin tidy but that won’t be until the Summer holiday. We might also get the wall at the side replaced as it’s set to collapse. Until this is completed I’m leaving off planting along this side of the garden so the plants don’t get damaged. I’ve got lots of ophiopogon planiscapus to edge the path. This will give a layer of short evergreen plants throughout the year. It will gradually grow thicker helping suppress weeds. 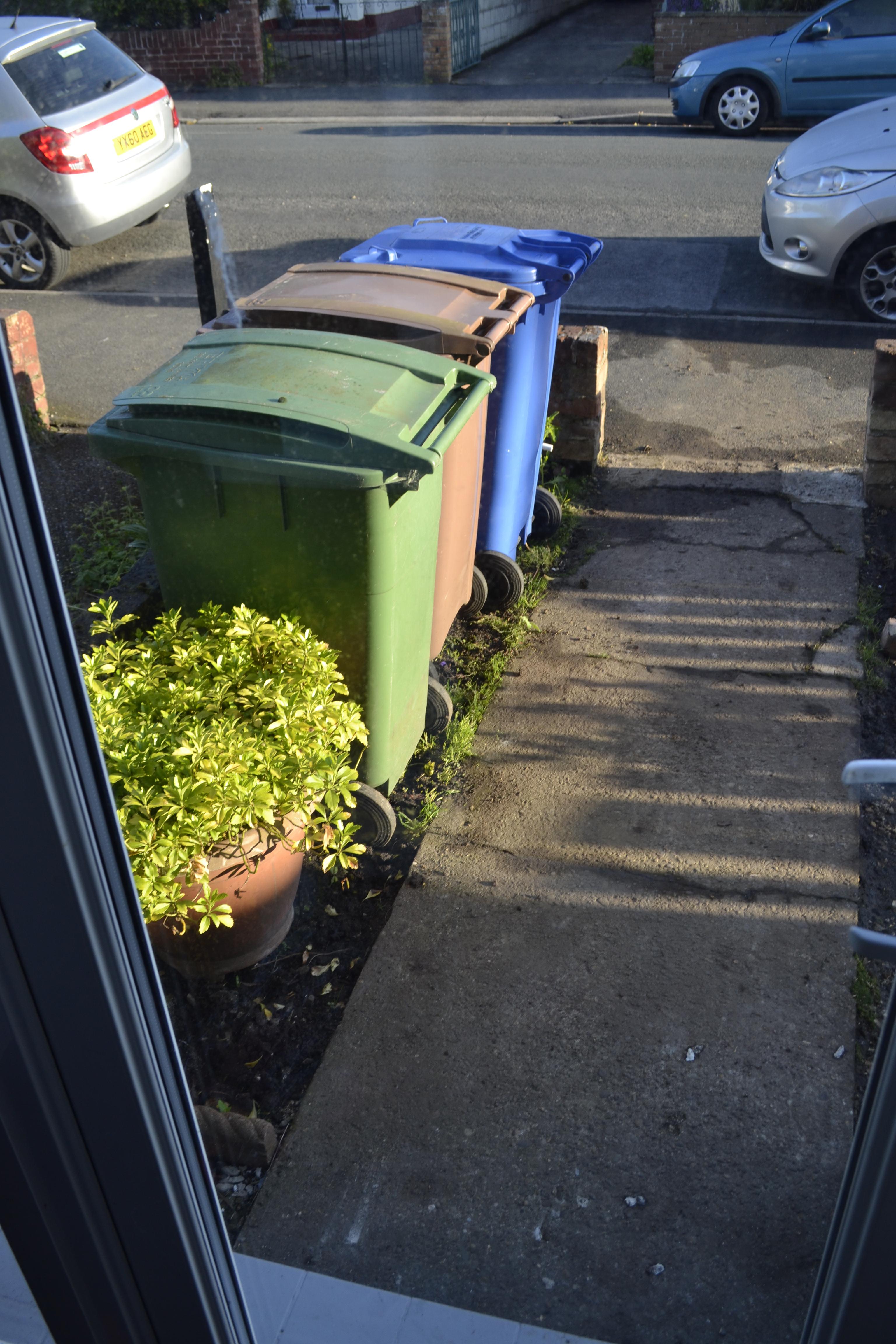 I started with the Ilex crenata and the hydrangea limelight. The hydrangea limelight has gone right in the middle. With a long flowering season, this seemed like a good choice for a centrepiece to plant around. This can grow to about two metres and a half. The flowers start lime and fade to cream then brown off. I don’t expect much from it this year. I just want to get it well established this year. The clay soil with it’s added organic matter should suit it well. The garden is North facing. Hydrangeas like shade and the colours should stand out well even during the darker periods of the day. 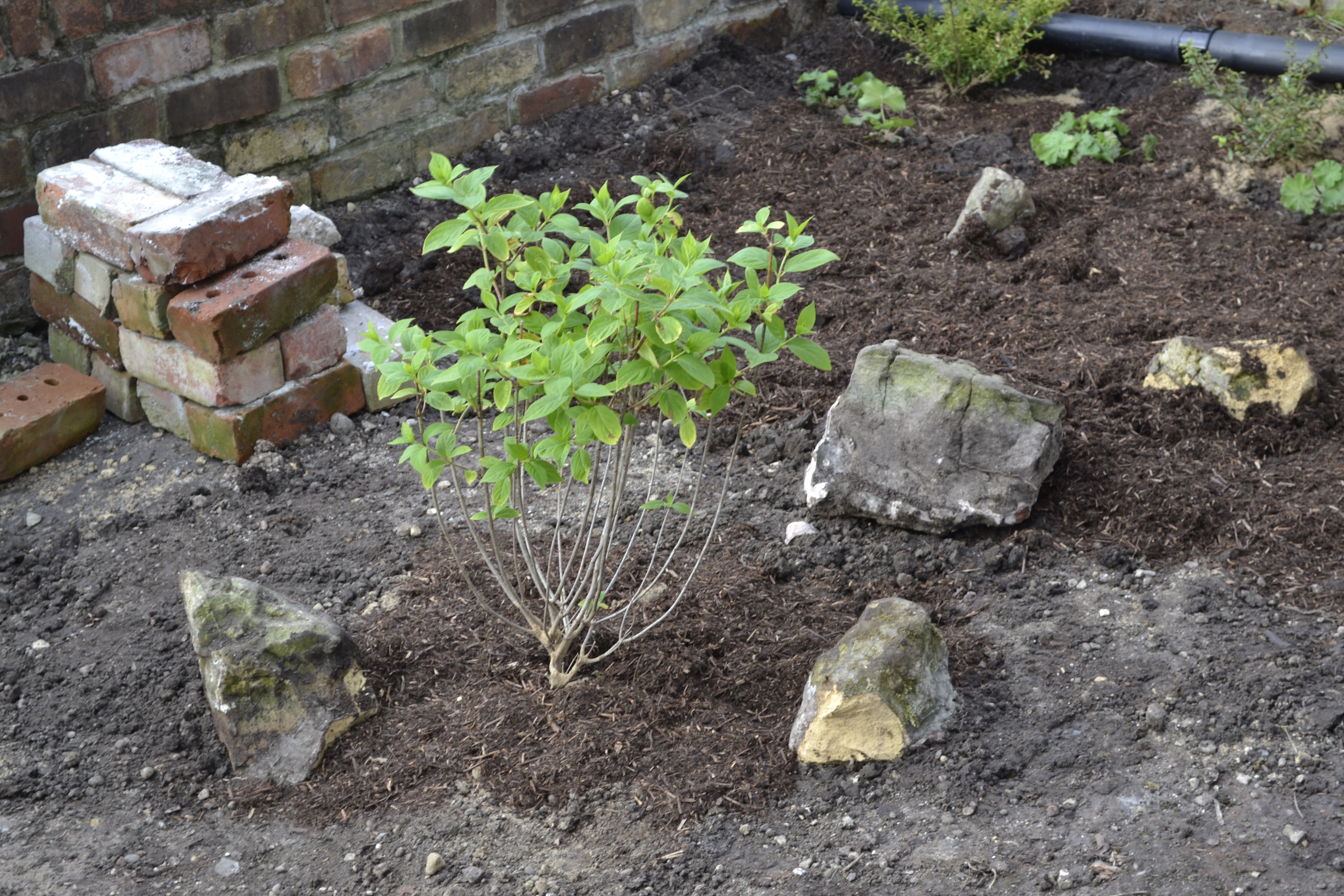 Four ilex crenata Stokes have been planted along one edge. These replaced the hebes. This form of holly grows into small domes. It’s often used a box alternative. This will give an evergreen mass along one edge of the garden for year-round interest. These are the plants I’m least sure of how they’ll perform. They will take quite a while to fill out so I don’t expect beautiful cloud pruned hedges for a good many years. I’ve moved a few self-seeded alchemilla mollis to fill gaps while it fills out. 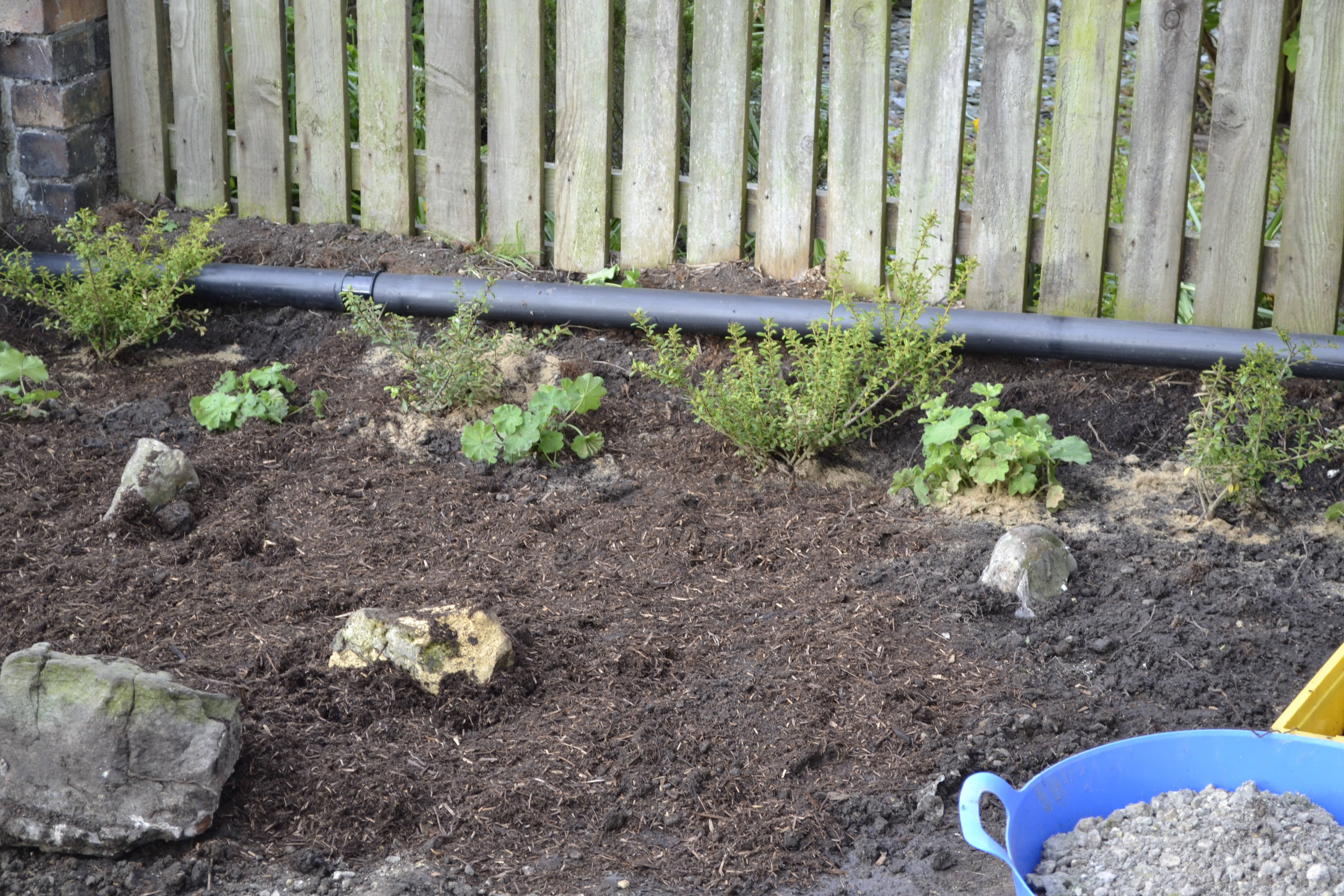 The plan is to have the path to the house replaced and then another line of paving along the edge of the house so we still have access to the windows for cleaning and the water butt. Then I want stepping stones curving between the path and the corner near the water butt. This will give Alice a nice path she can jump between and spots for me to walk on when I’m weeding and watering. This will help the soil improve and avoid it becoming too compressed. I’ve used some spare log cuts to mark out roughly where this will go. To the side of the path, I am placing plants that should be able to handle being brushed past. Then more fragile plants will go further back from the path. 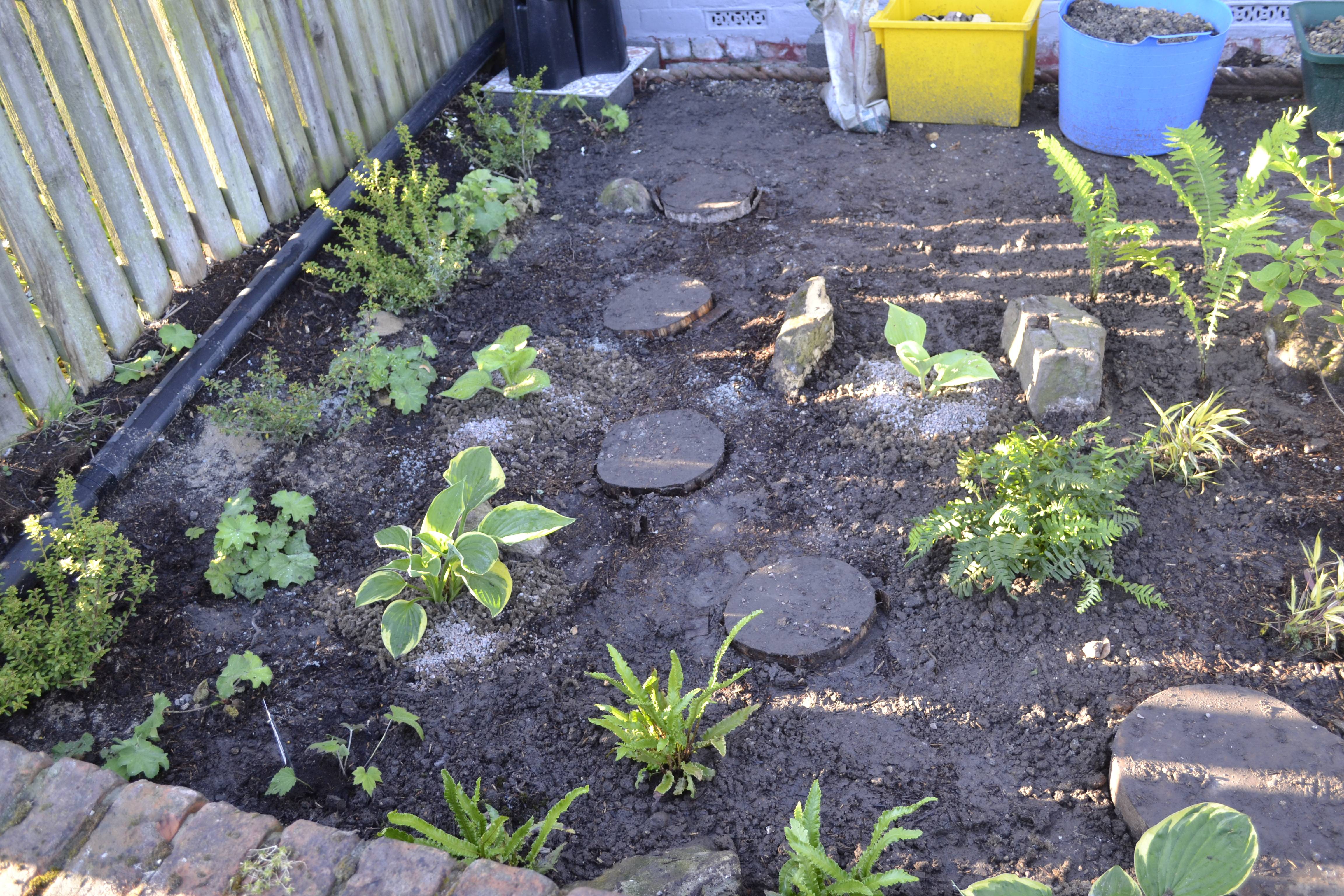 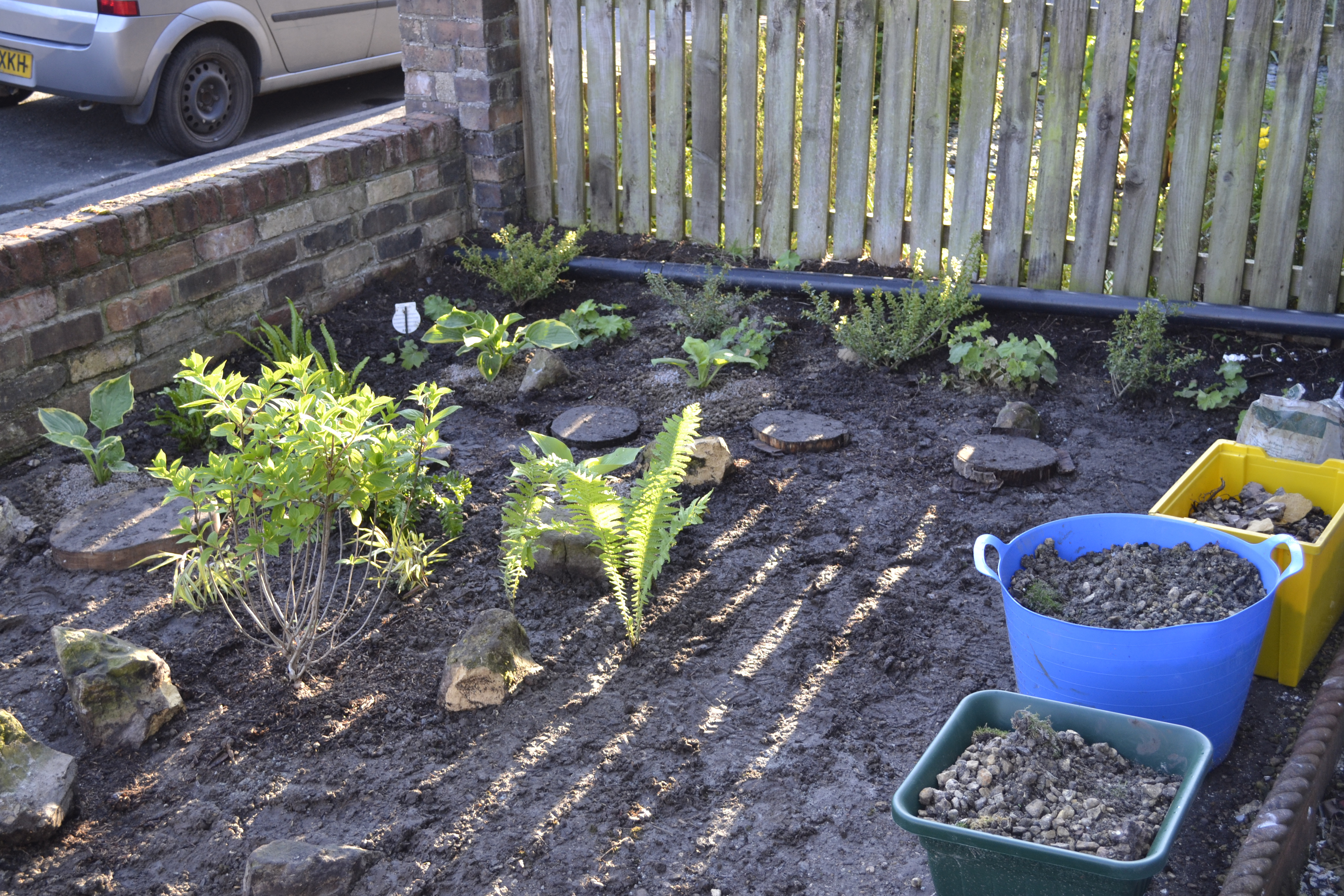 I’m only planting up the back 1/3 for now so there is still space to dig the old path out and replace. But I want to start getting some of these in so they have a chance to root in before Summer. The Japanese Anemone Honorine Jobert is one of the few plants I’ve chosen with flowers of any note. They have a reputation for spreading quickly but as I like these lots I don’t mind dividing it to plant elsewhere. 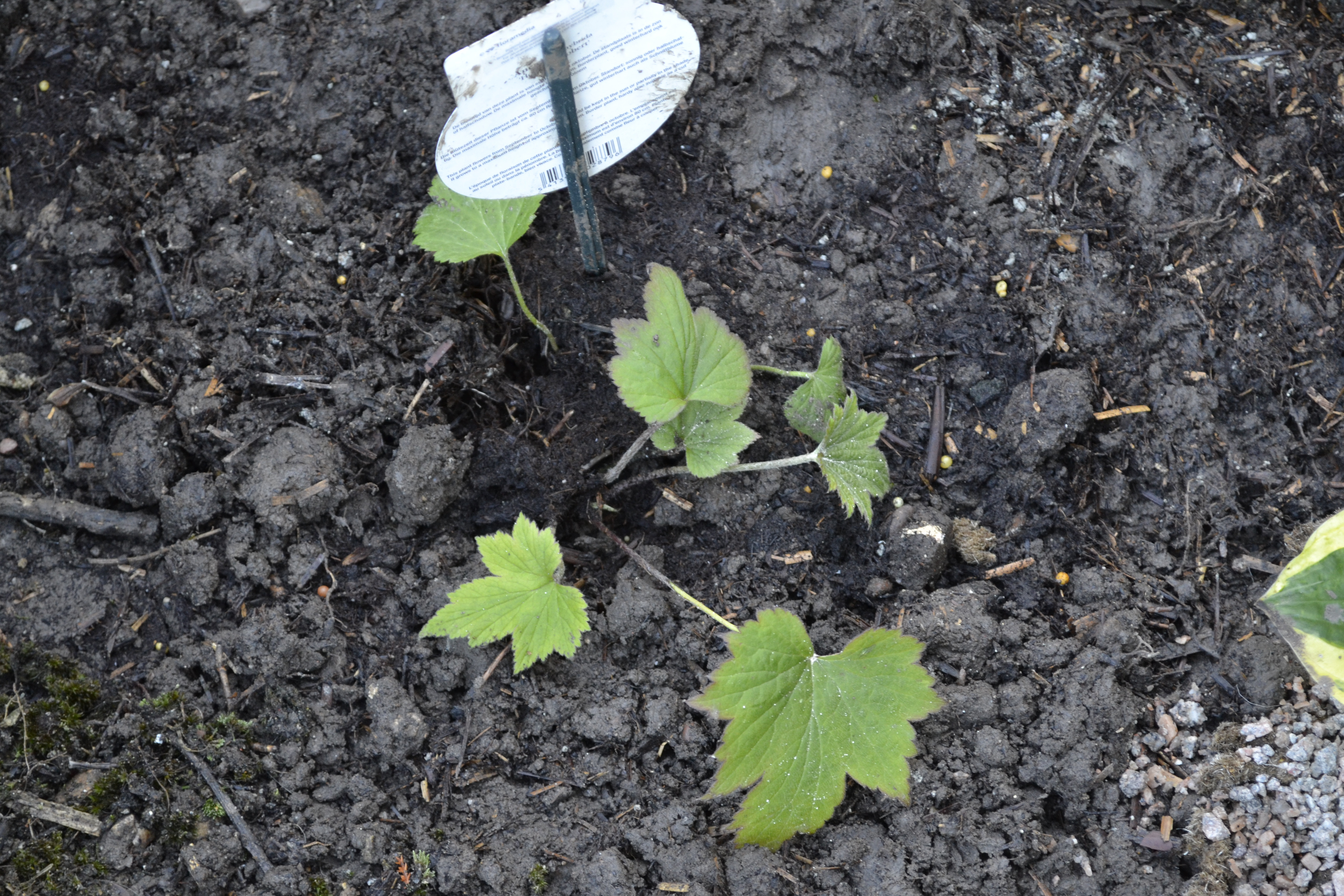 I bought lots of Hosta Fortunei during winter when they were dormant. As they look like pots of dead plants at this point they only cost £1 and £2. I took a chance buying them this way but they have all grown fine. I now have double figures worth of hostas for at least 1/2 the price. Behind is Asplenium scolopendrium ‘Angustifolia’. This fern grows with long thin wavey fronds. It is evergreen so will keep some structure when the hostas die back. I’m planting them in groups together. These came from plants for shade. They came well packaged and were delivered fast. All the plants look strong and healthy. 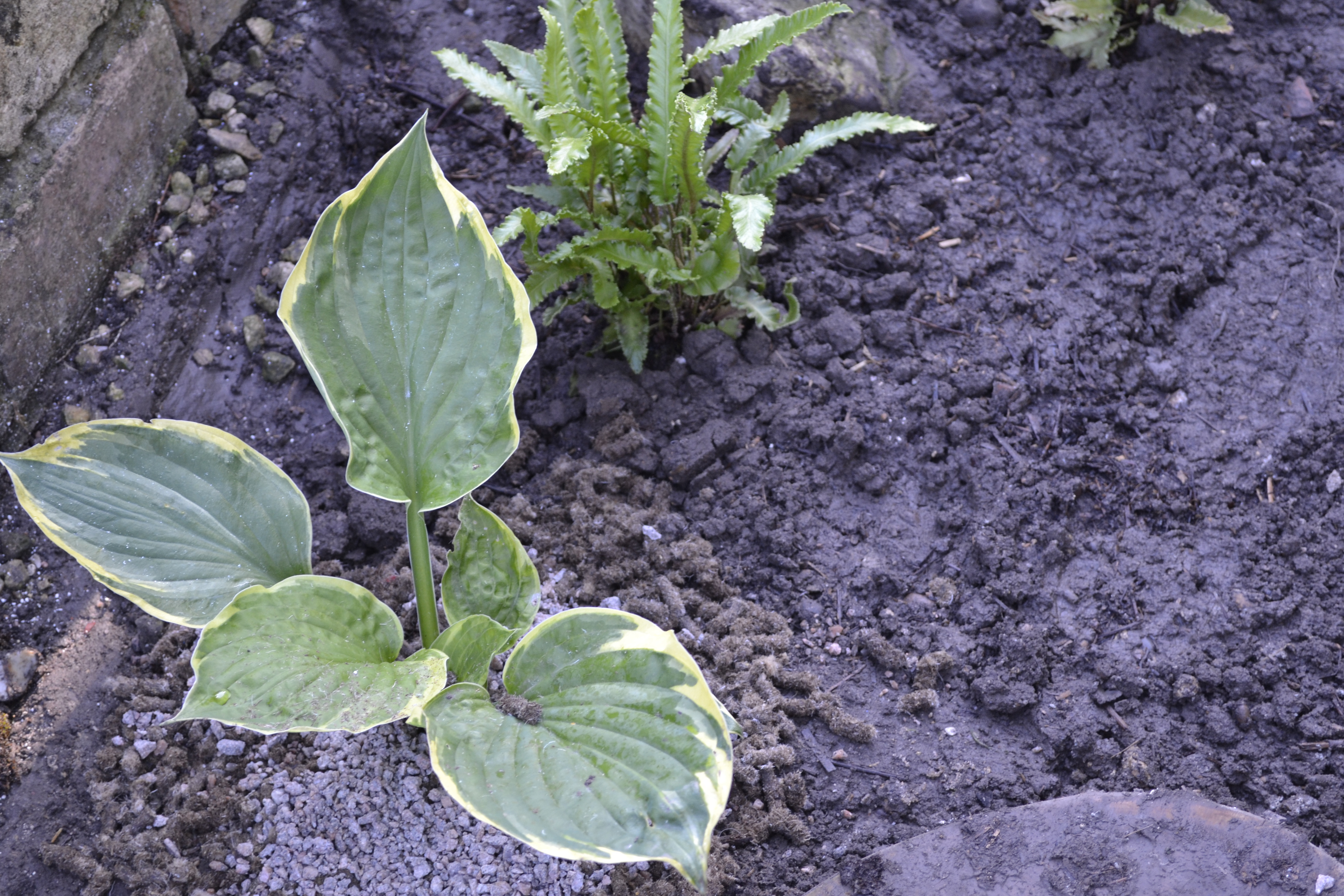 Around the hydrangea, I’ve planted two small patches of Hakonchloa macra ‘Aureola’. Forest grass, as it is also known, is a grass that likes growing in shade. While only small at the moment it will hopefully settle in and spread. The blades are striped and turn orange in Autumn. This will add a bit of contrast in shape, colour and form to the surrounding hydrangea and hostas. 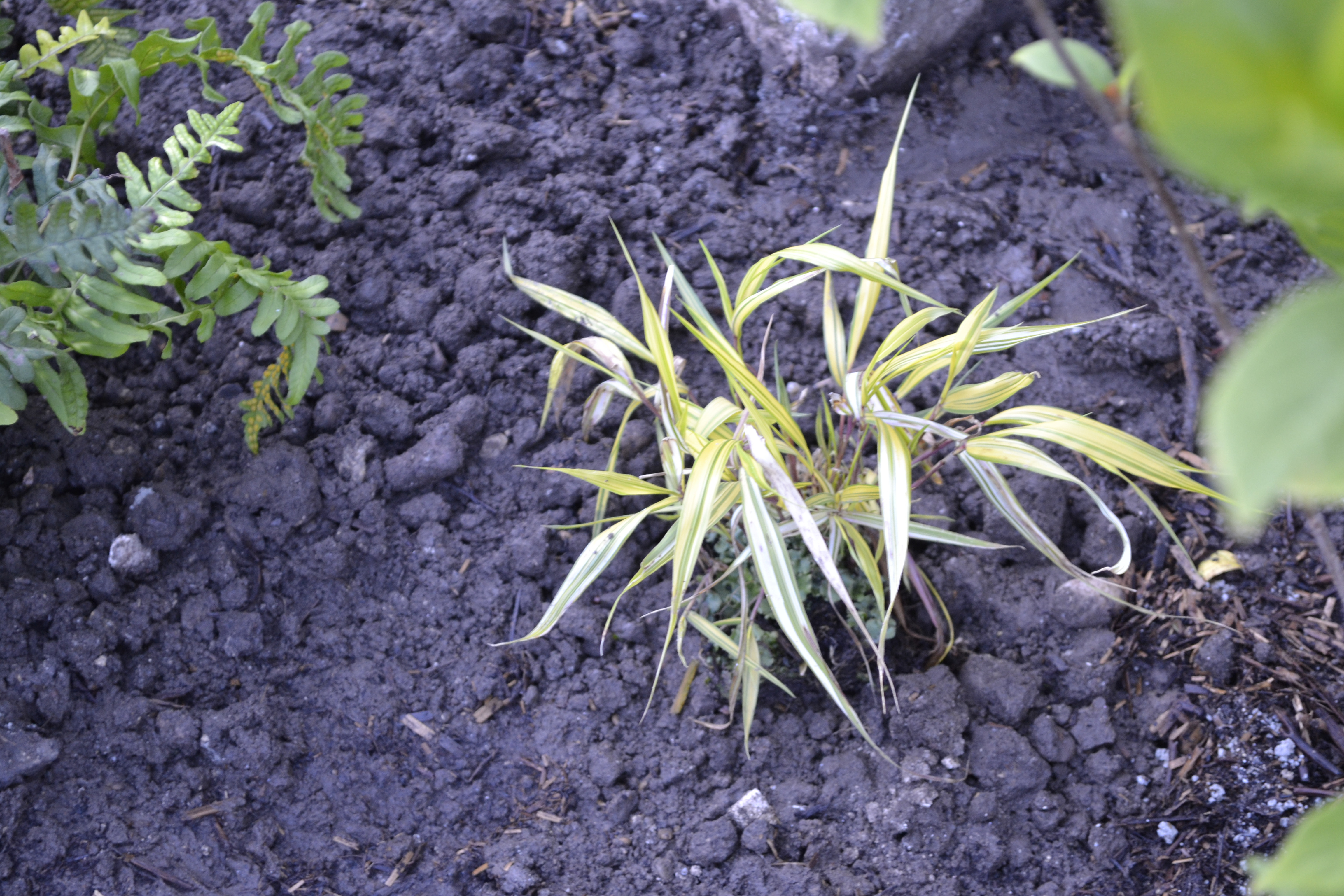 These ferns have been divided off an existing fern clump. The neighbours have it growing near the pond and it works its way under our fence. I think it is possibly Matteuccia struthiopteris ‘ostrich fern’. It grows tall and upright like ostrich fern and dies off in winter. But as I didn’t plant it I can’t be certain. Either way, free plants. They will probably droop a bit for being moved but will come back fine next year.

I’ve dotted a number of rocks around the planting. These were in a line alongside the hebes that have been removed. It seemed a shame to waste them so they are being scattered around the planting. The moss can reclaim them. The hosta was from a plant sale a few weeks back for £2. The lady selling thought it might be Big Daddy so I’ve left it a reasonable area around it for it to form a big mound of leaves. It’s had a few bites taken out of it but it’s largely looking good. 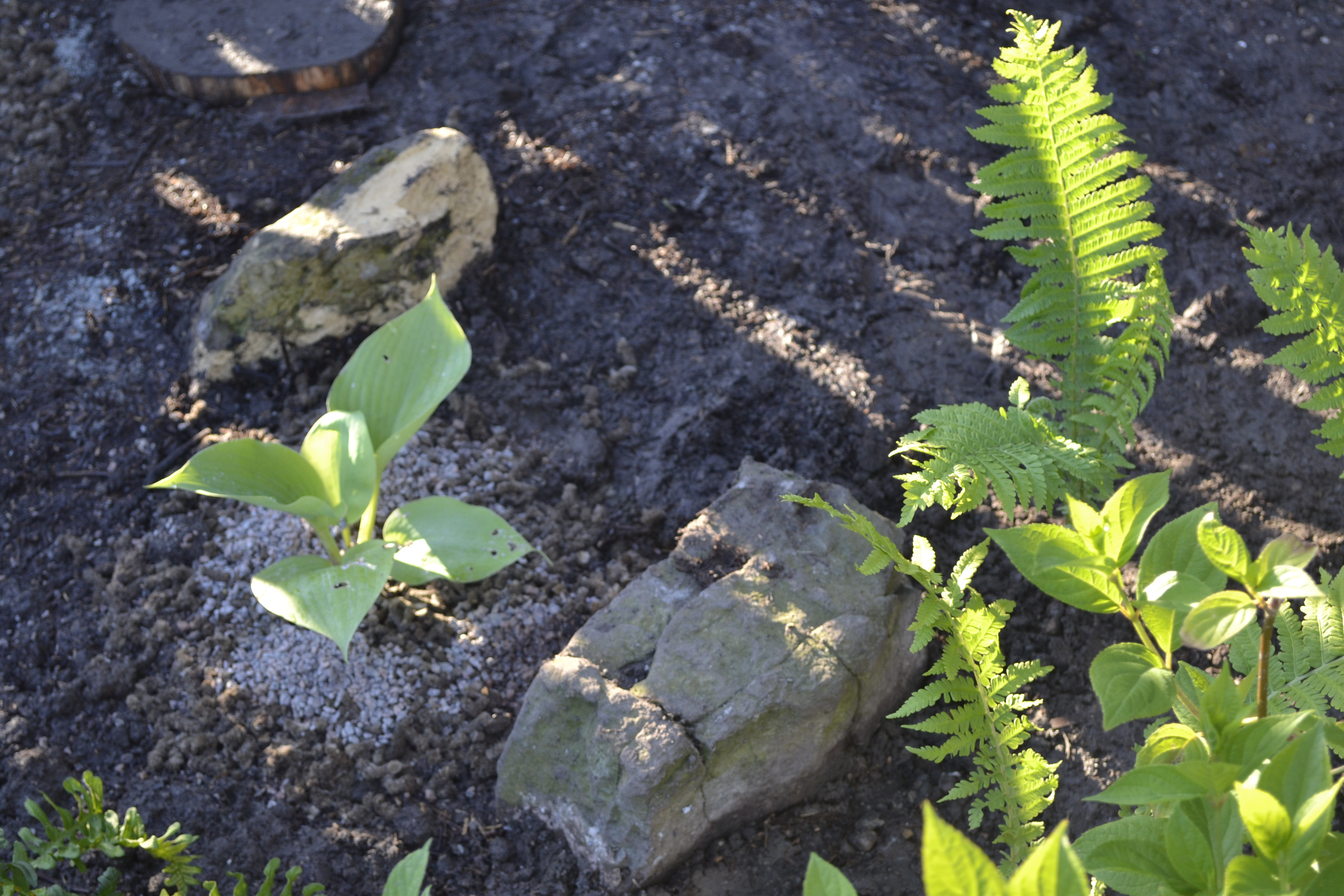 The water butt needs its overflow pipe sorting but it’s already proved useful. While it isn’t very pretty I haven’t had to bring any water around from the back garden tap. I’ve been able to water purely from the butt. With the garden being clay soil and North facing and in shade for most of the day the ground should retain water quite well reducing the need for watering. In addition, many of the plants I’ve selected should become quite self-sufficient once they’ve rooted in. The water butt is sat on a tile sample we’d ordered for the newly built garden room but didn’t use. It is meant to be suitable for outside. Amy thinks it’s a bit extravagant for a base for this but it isn’t going to get used for much else. 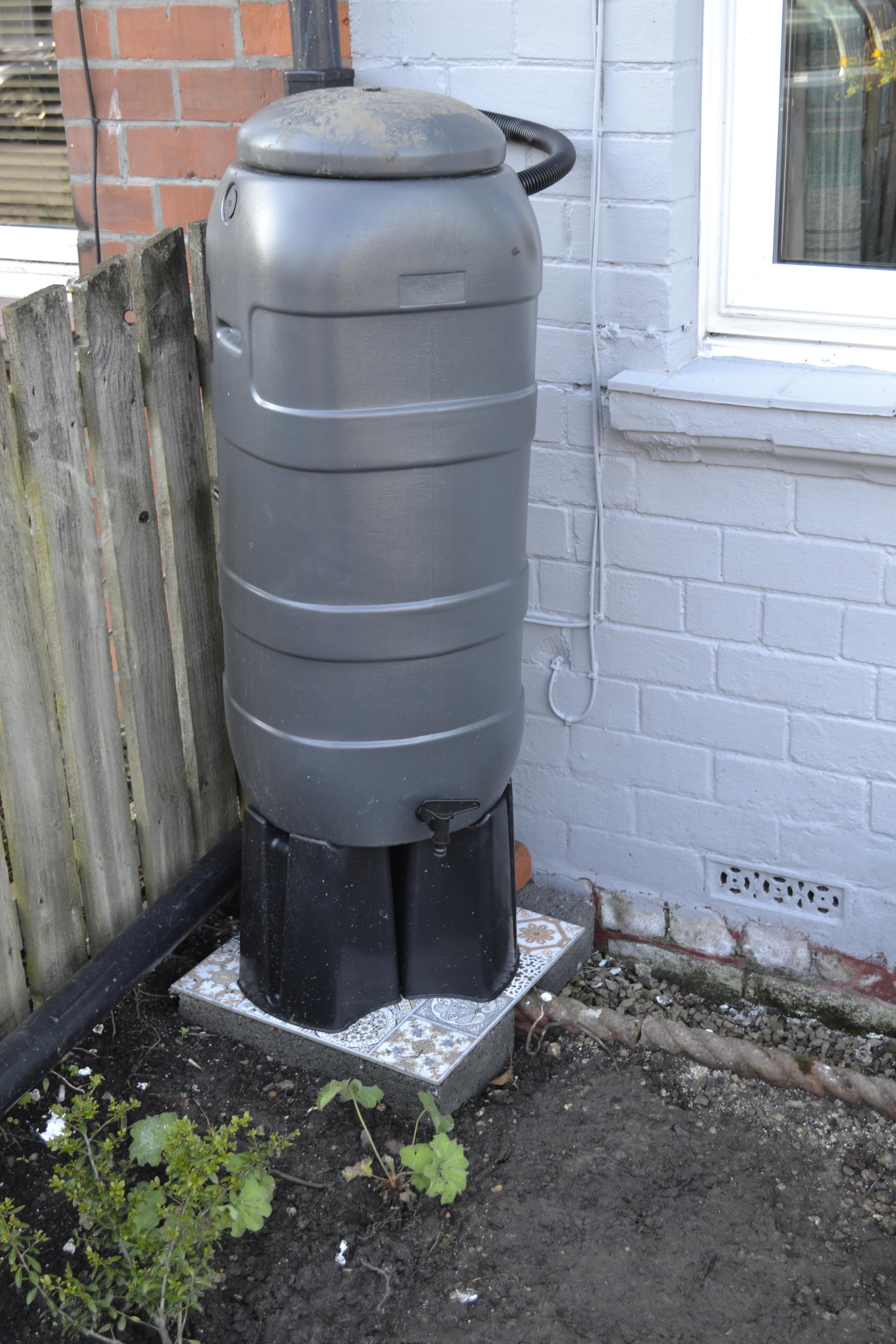 The view from above shows what I’m aiming at. The hydrangea is central with the house rather than the border. The bricks in the corner are just there for now as that is where all the rain is draining to. I’m just using them as a step across currently. The boxes along the edge are full of rubble that I will use for hardcore to lay the pavers along this edge. The drain pipe along the fence will gradually be covered by the Ilex Crenata. The plants have all got a little bit of space to spread. I may put some temporary planting inbetween while the main plants fill out. More A. mollis maybe. Looking from above I can see a few blue hostas and different coloured heuchera will add some more interest to the planting. 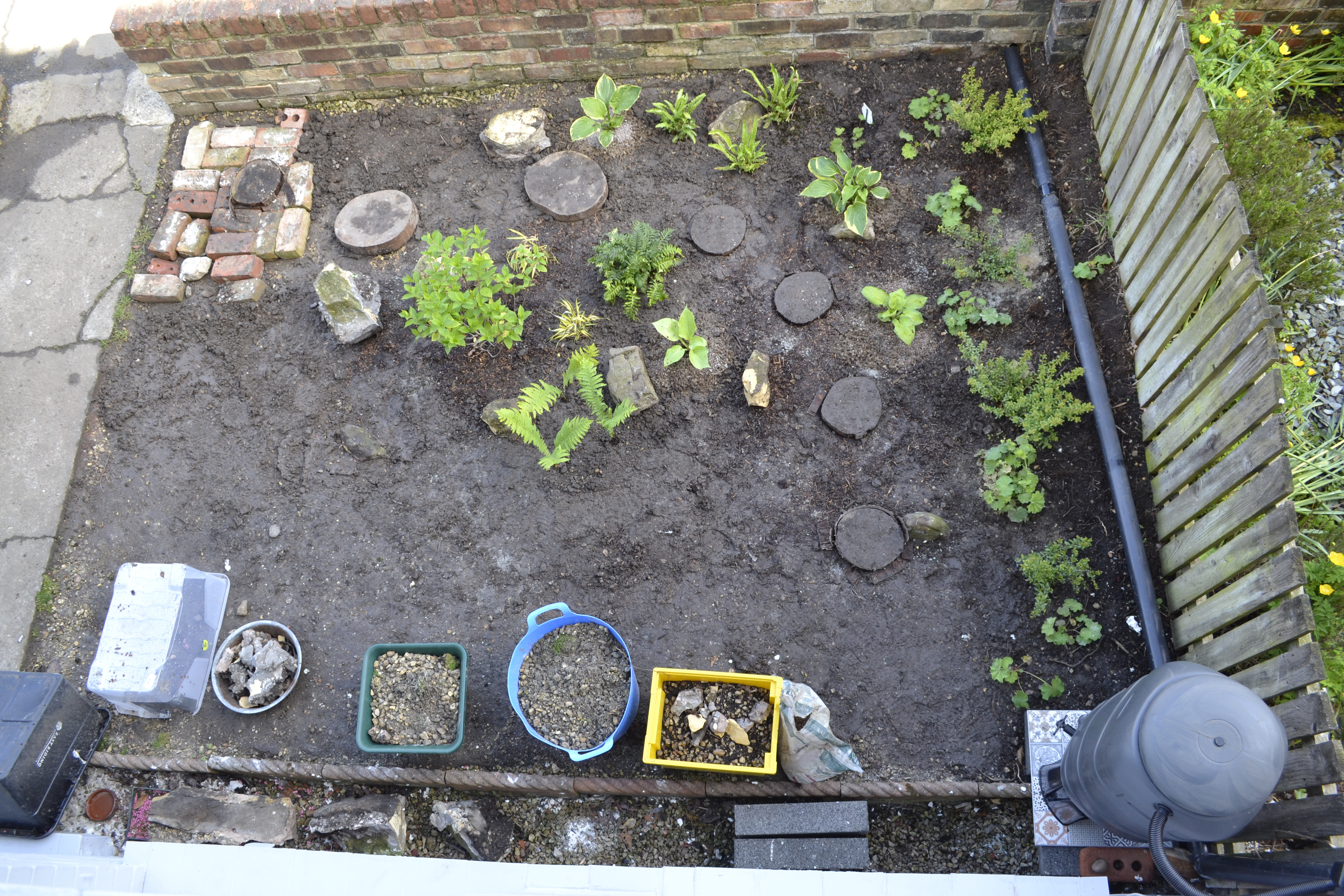 While it doesn’t look like much currently I’m confident it will fill out nicely to look good. It has ended up with quite a Japanese feel with many of the plants being Asian in origin and the rocks dotted around. Amy thinks we should add some fairy garden elements for Alice to enjoy but as it’s in the front garden I don’t want to put anything too expensive that might be stolen. I’m going to hold off on the rest of the planting until the path is done but it feels better now I’m starting to fill the space. Lots more ferns, hostas and heucheras to go in. I’ve also got some coleus seedlings on the go. I may try these for filling gaps to add some bright bursts of colour within the planting. I am off to open gardens today so I may return with some more plant purchases if anything takes my fancy. Even if I have no physical purchases I’m sure I will return with lots of ideas and a new wish list of plants. It will probably be another month until the path is done so it will be a little while until the front garden progresses again.