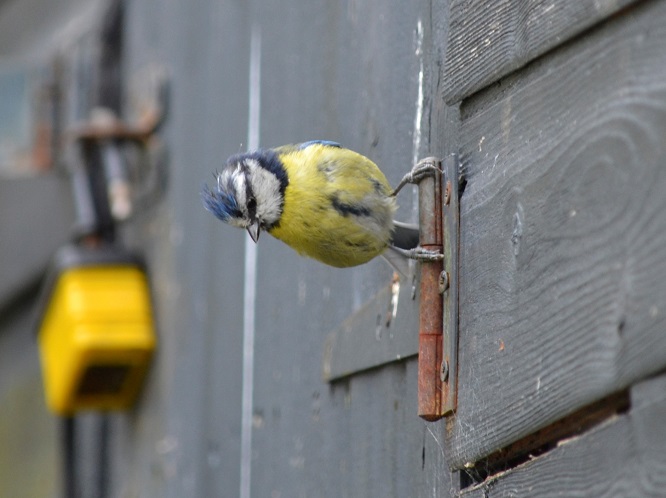 I’ve gradually recovered from illness last week and enjoyed getting out in the garden this half-term holiday. The building work is just about done and I’ve been able to clear the lawn of detritus and get back into the borders. Alice is happy to have the run of the lawn again. I’ve made a start on clearing the front garden. The gravel is coming up and the ground needs digging over ready for ferns and hostas going in. It’s slow progress but will be rewarding in the end to have a front garden full of the shade-loving plants I love.

These were planted a few years ago. They are a short allium, well suited to pots. I have them in the border where they are currently getting a bit swamped by other plants. They have large balls of off white flowers. They have lost a bit of their size over three years, so I may look at topping these up next year as I do like them. 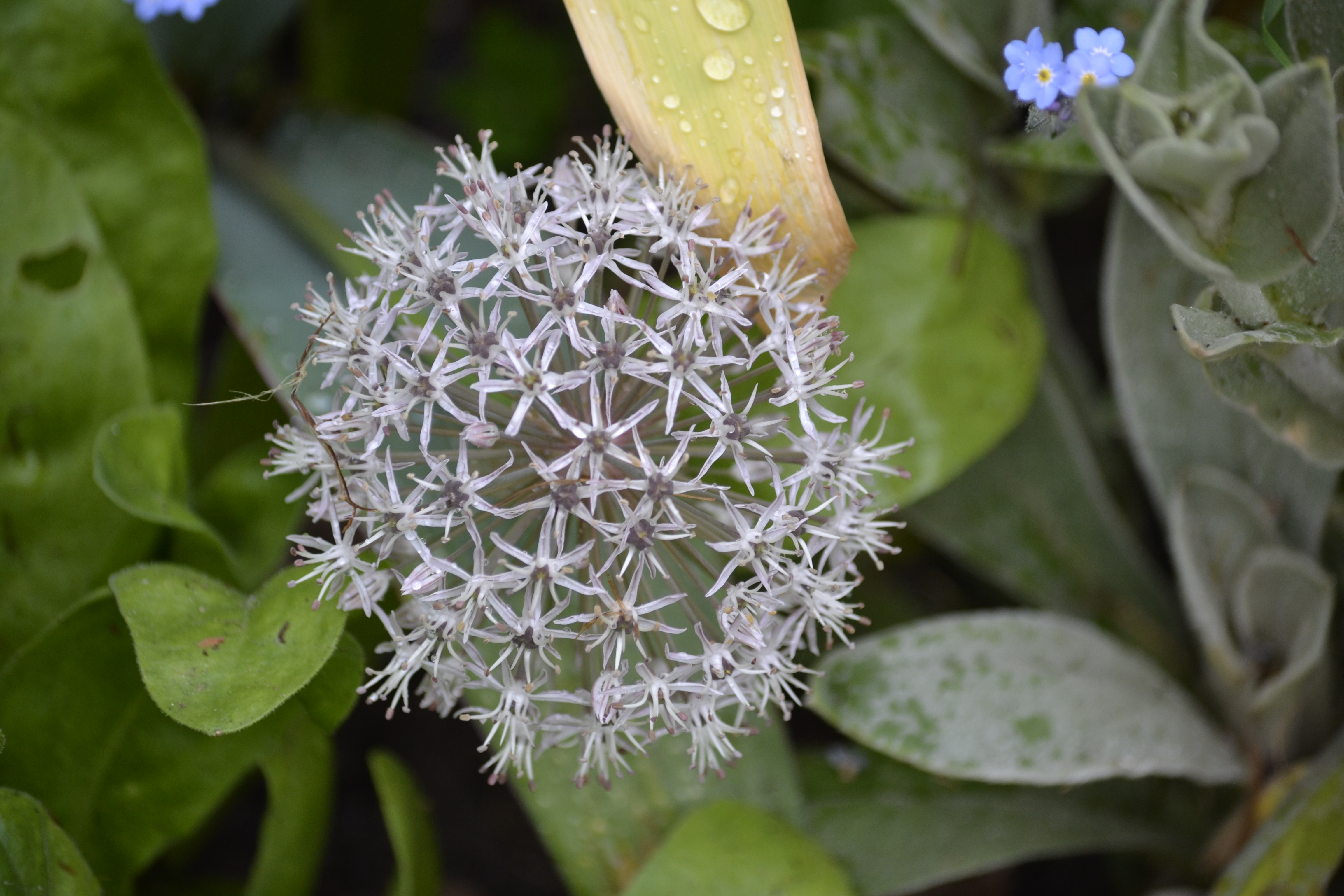 The damselflies have emerged in abundance. I don’t know whether it’s next doors pond getting established or whether this is just a good year for them but I seem to be seeing more than normal. We always do well for damselflies with several ponds around us and further afield the mere but there does seem to be an increase on previous years. 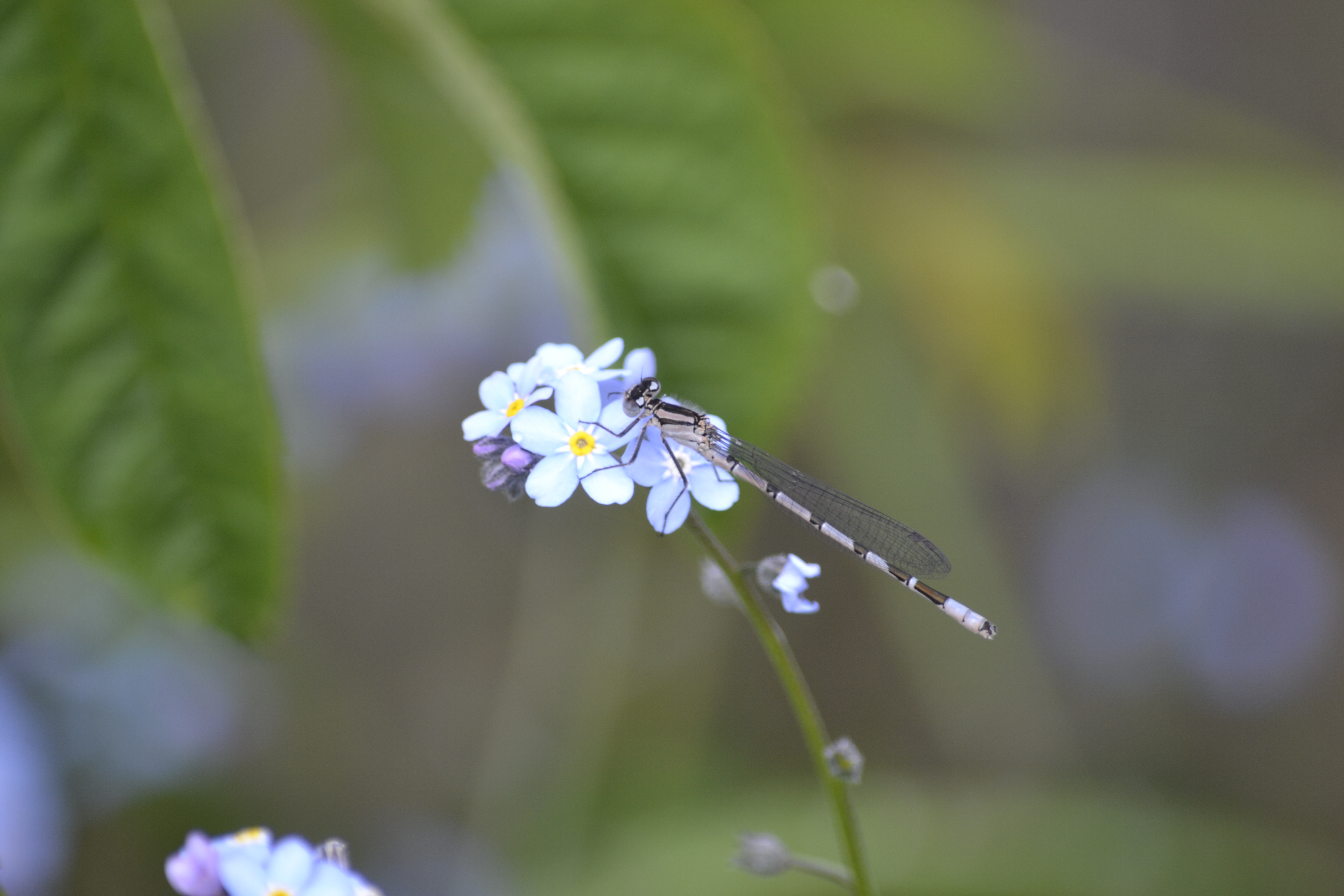 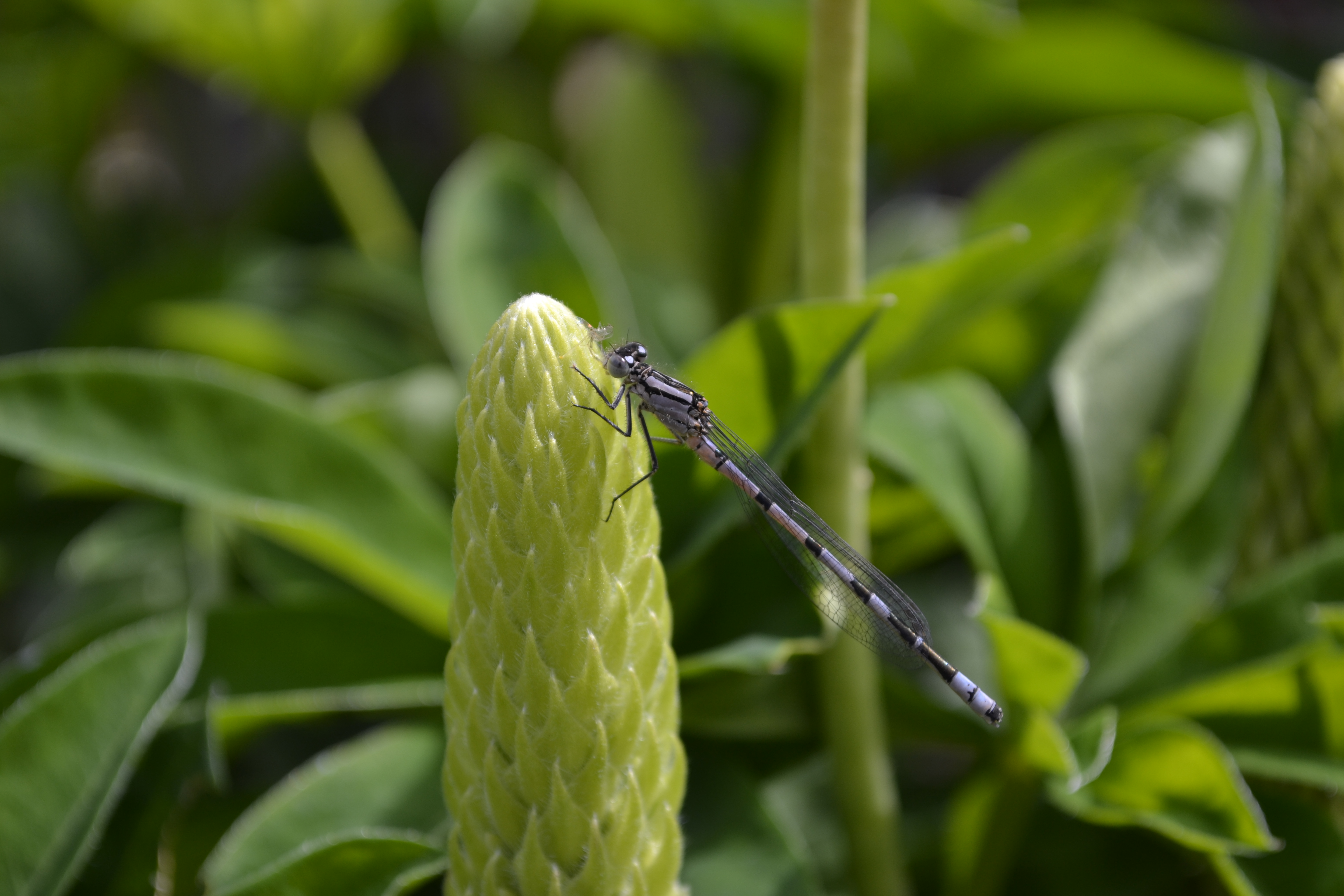 I finally got round to spending my birthday vouchers. I’ve added two more climbing hydrangeas along the fence. This wil take a while to get established but once they do they will provide greenery across a good section of the fence for much of the year. They like shade but can survive in some sun but it will require more water.

One has gone to the side of the bug hotel. I’ve also got round to planting one of the hydrangea limelights just in front. Another has gone in the opposite border and then I have one left destined for the front garden when building work has finished. 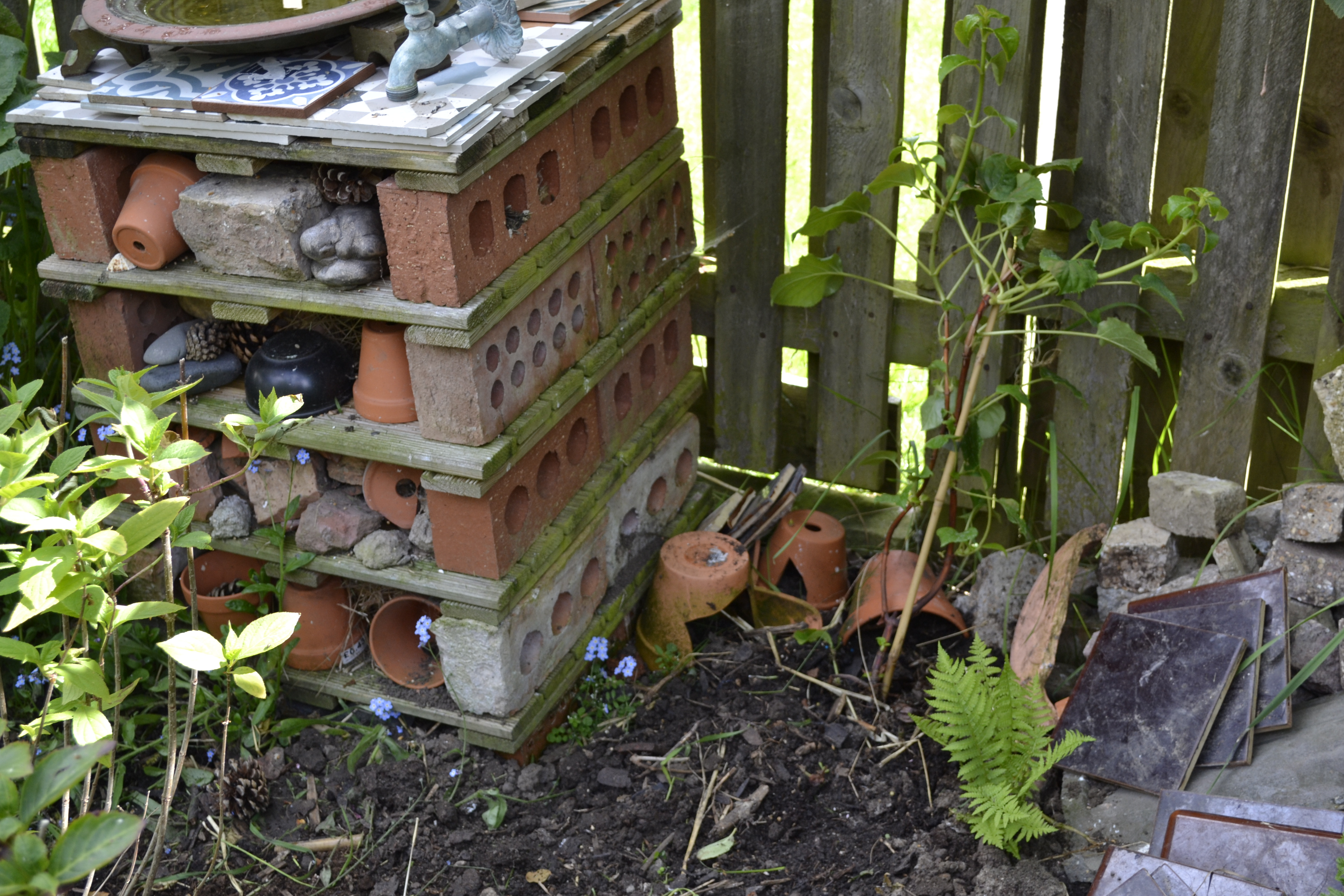 The second climbing hydrangea has gone to the other side of the bug hotel. I have cleared away a mass of ox-eye daisies disturbing lots of frogs and planted one of my acers bought a few weeks back. The acer will give a nice small tree with a good spread of pointed leaves while the hydrangea will grow to cover the fence with wider rounded leaves. I think I might need something darker on the ground as this is lots of bright green at the moment. I do have some hakonechloa, forest grass, that might work here. 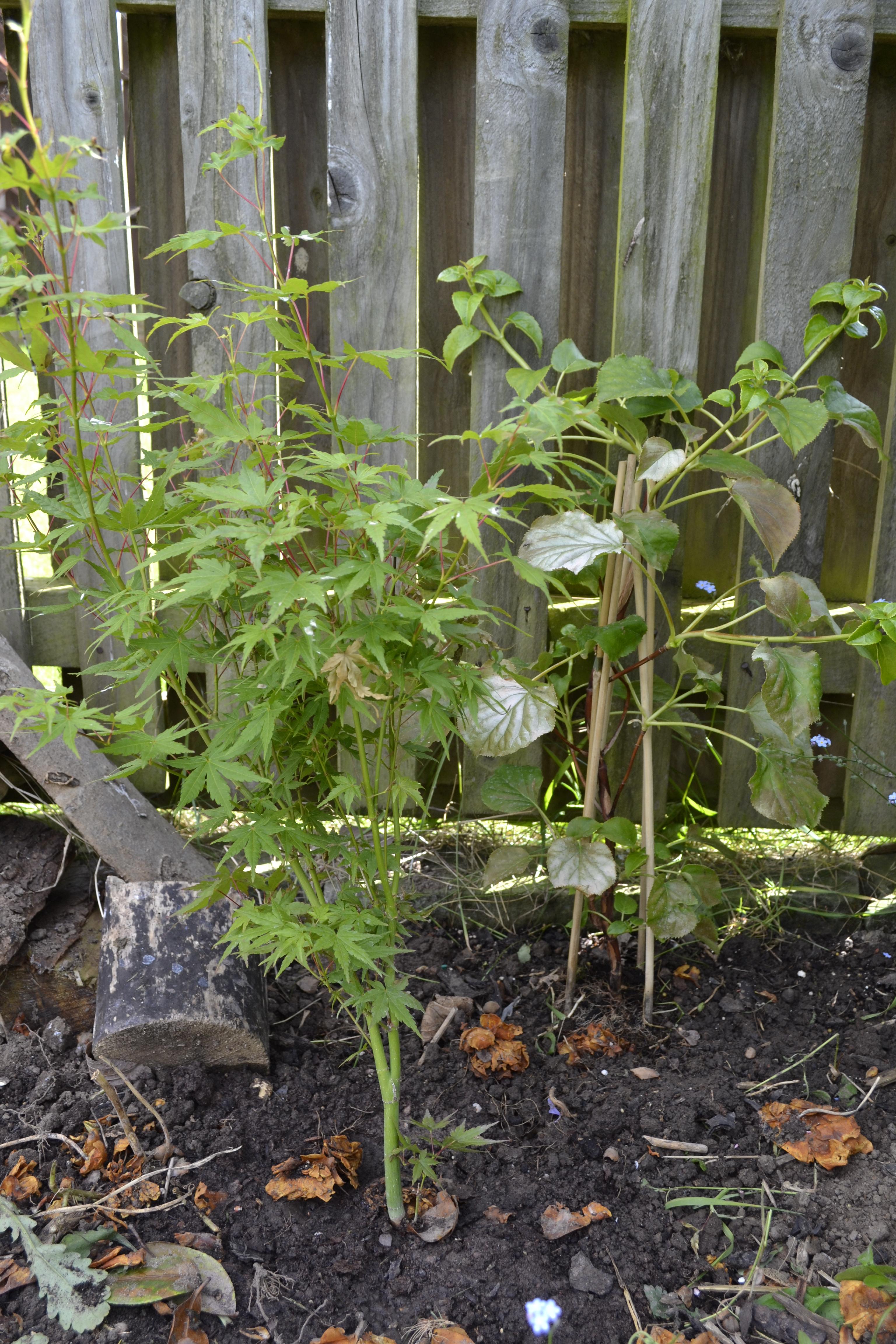 One of the disrupted frogs. 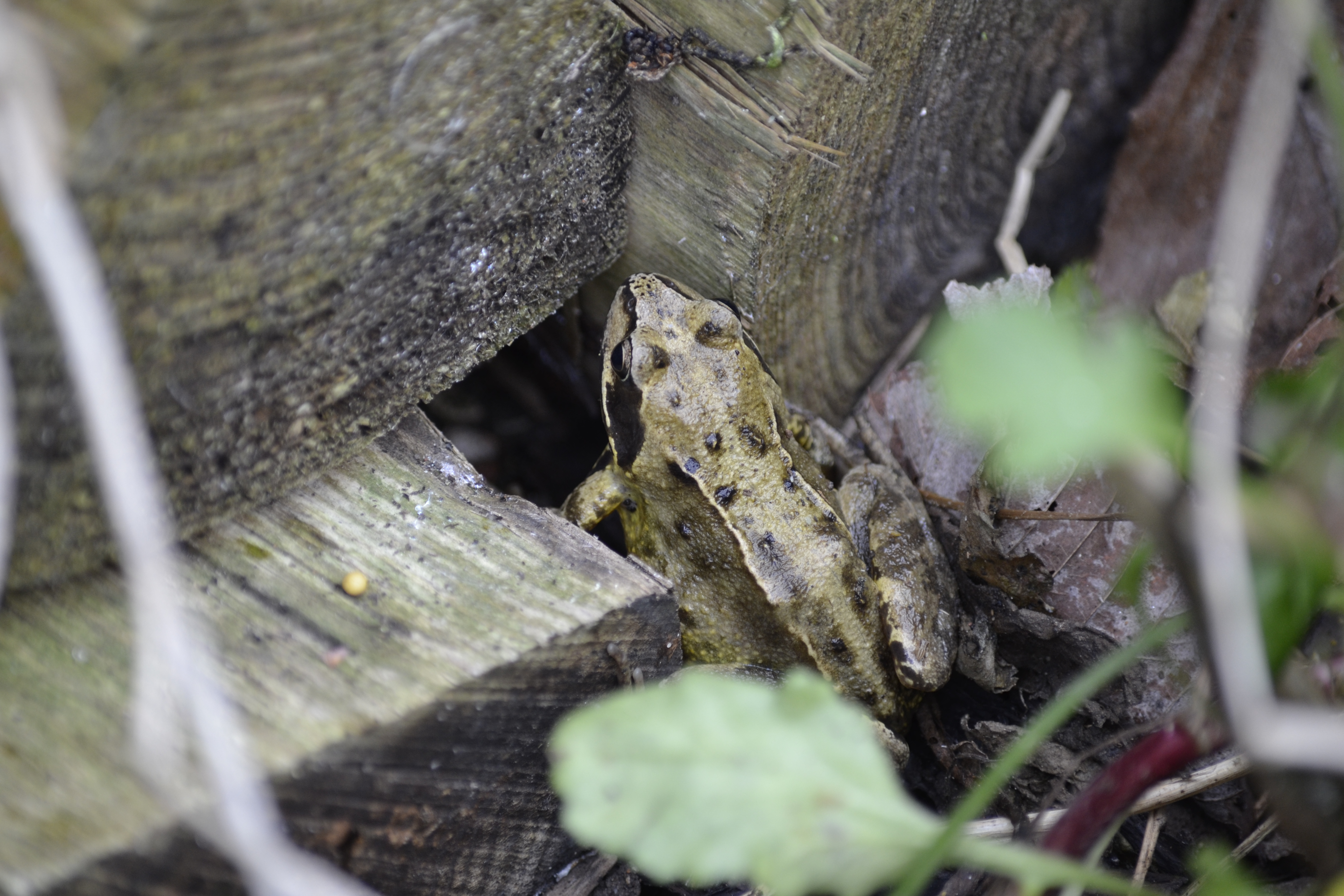 The existing climbing hydrangea we think has been in a decade or so. It covers a good section of fence in fern corner. I had complained last year that it had a shortage of flowers and has come back this year with a good line of flower heads along the fence. It isn’t really very visible hidden at the back. This is partly why I’m adding the other two but the birds spend lots of time hopping around within it. 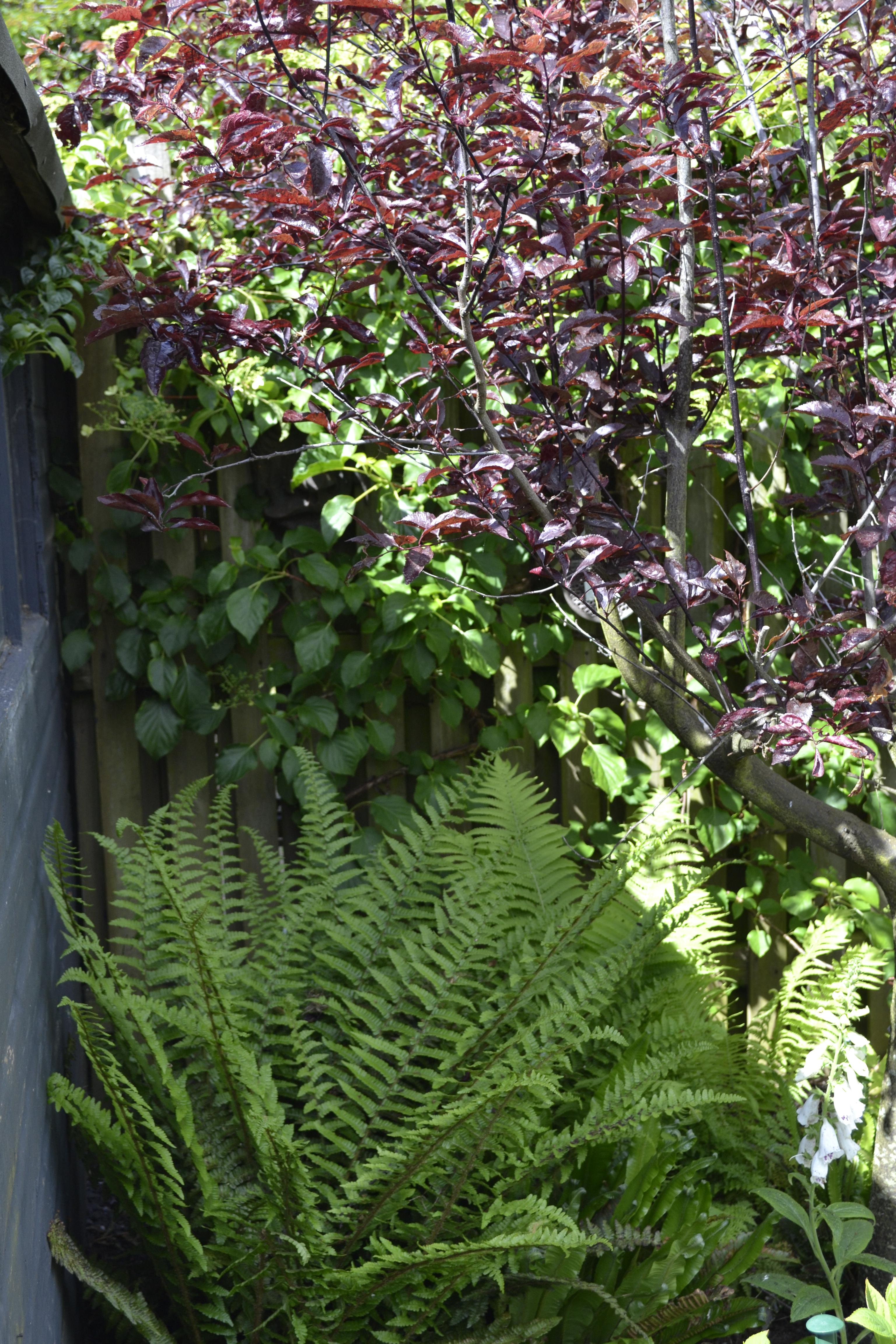 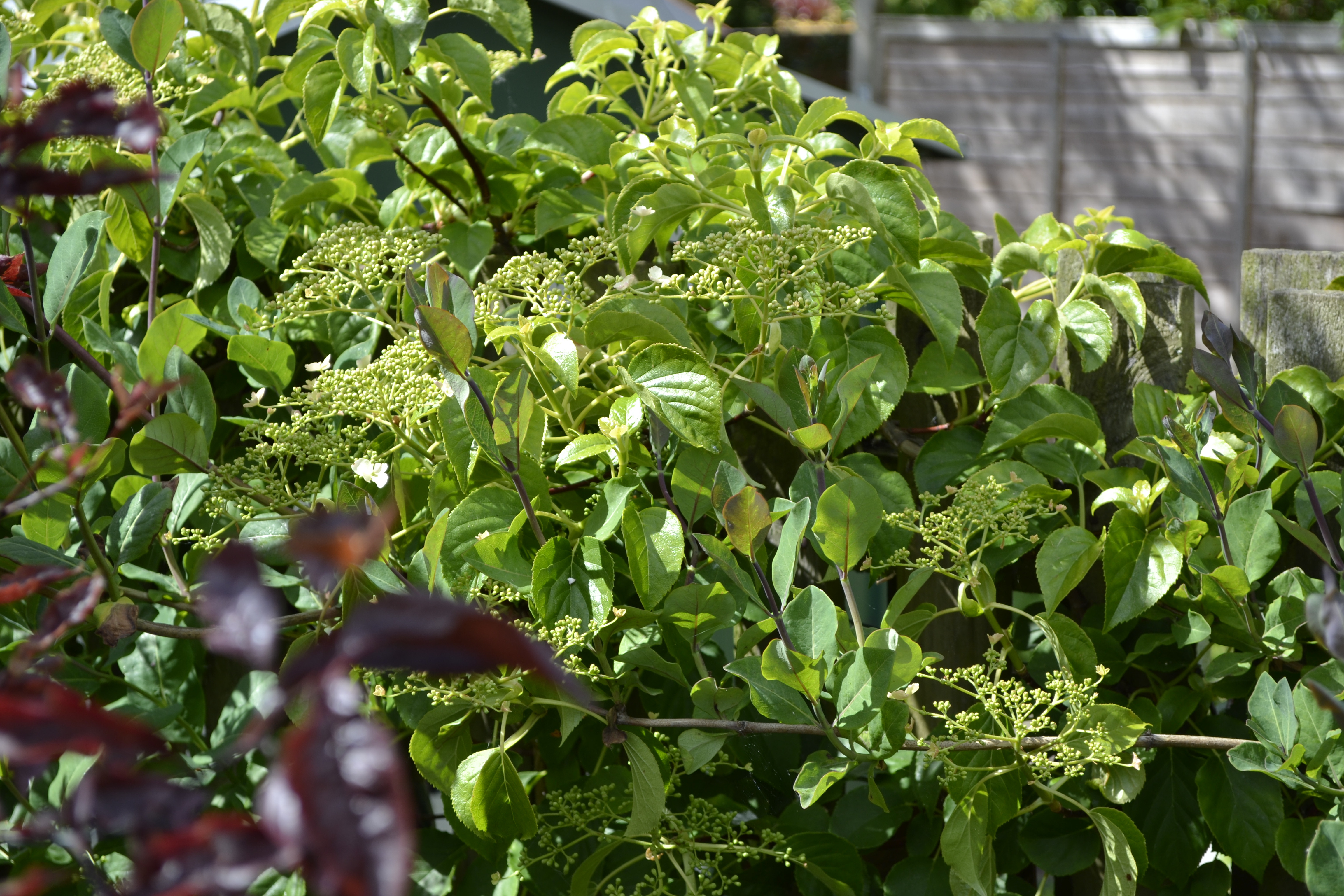 I’ve noticed blue tits back and forth along the edge of the shed. I think they are checking out the cobwebs for spiders to eat. I’ve loved watching their acrobatics as they leap and hang all over the overhangs. 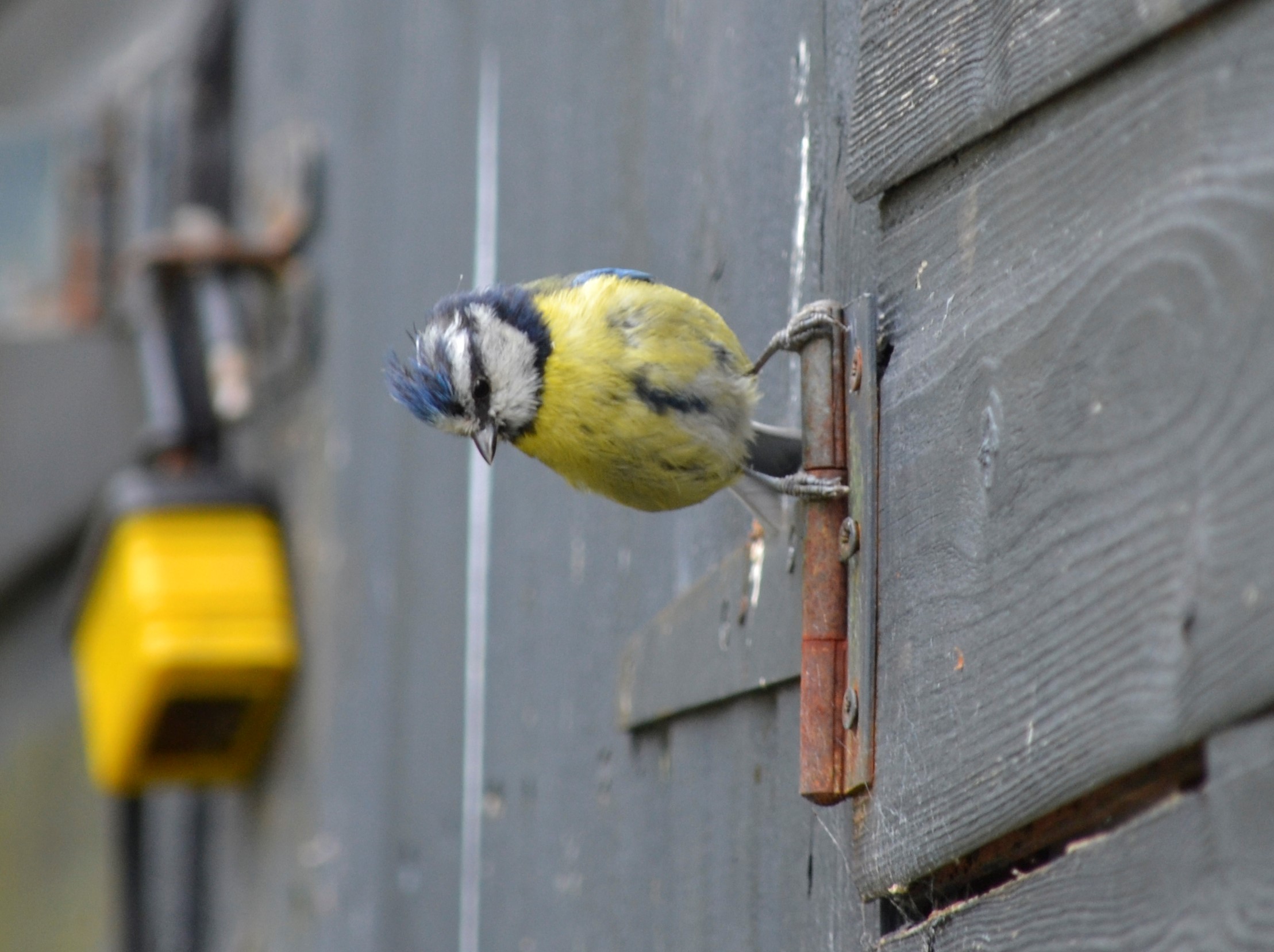 After a dainty clematis last week, this week we have a beast. I think this is the president. It has very large saucer sized purple flowers. It only has a couple of flowers this year but they are big enough to see from the opposite end of the garden. Once it’s flowered I’m going to trim it down to encourage fresh growth. 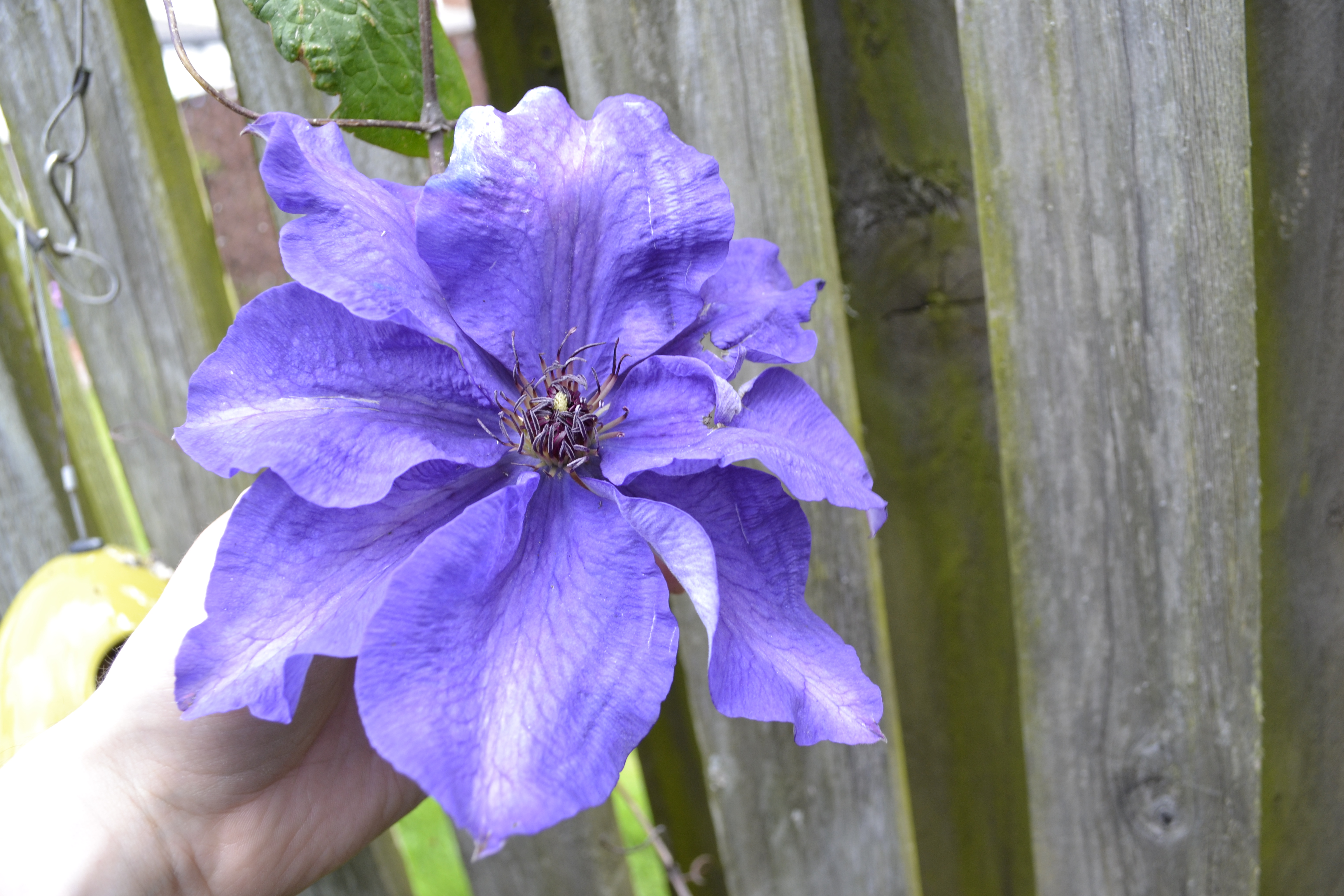 Alice spent part of her birthday money at Tesco’s on a fairy garden. A nice little activity for National Children’s Gardening Week. The kit comes with a small fairy house, mouse, fairy, washing line, coloured pebbles and some plastic flowers. It didn’t, however, come with any soil which is a bit of a swindle at the price. I’m sure they could put a small bag of soil in the kit for the price. Alice set up her plate and added the grass seed then arranged the parts. 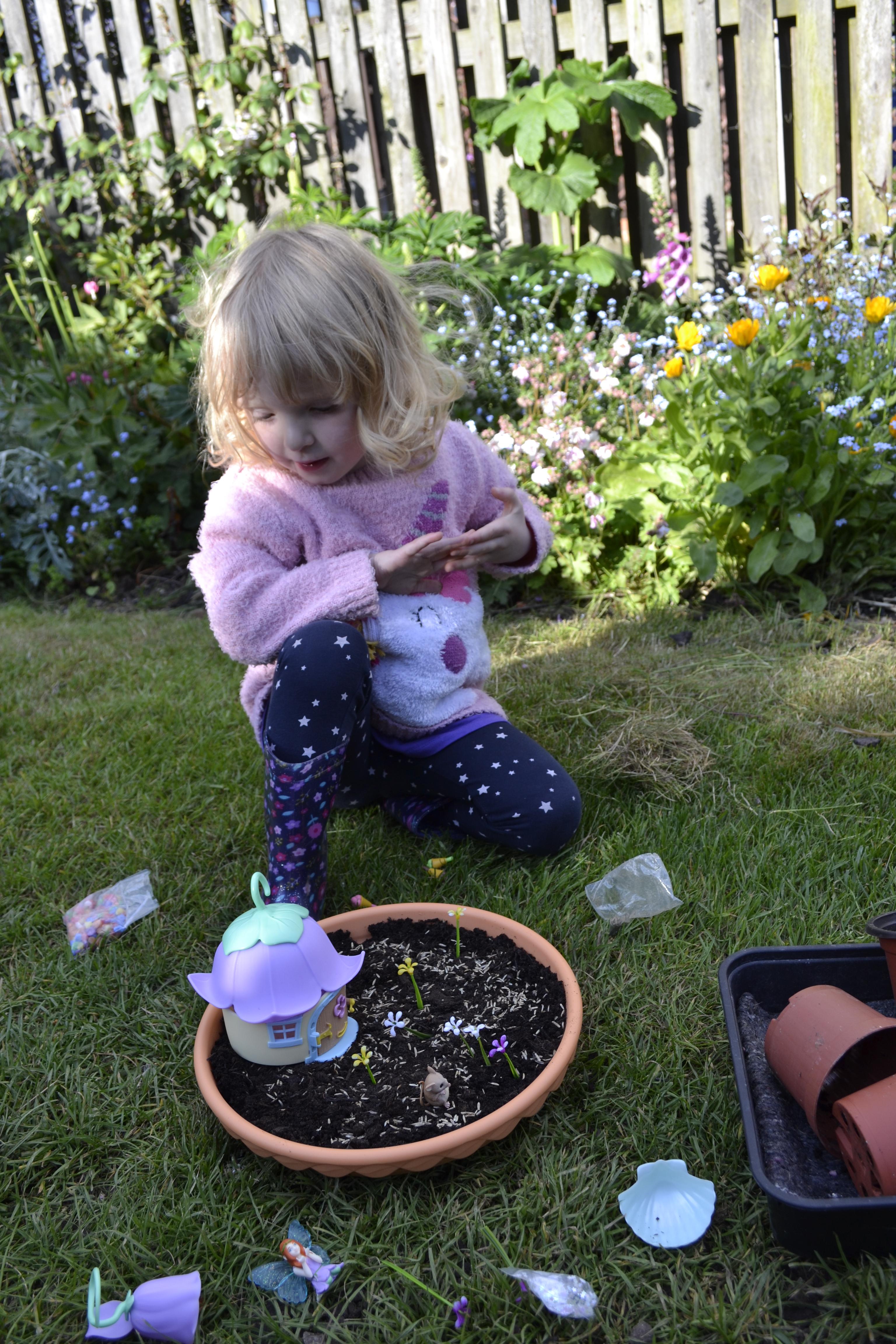 The finished result. The grass should start growing in a few days. Quick enough for the short attention spans of young children. 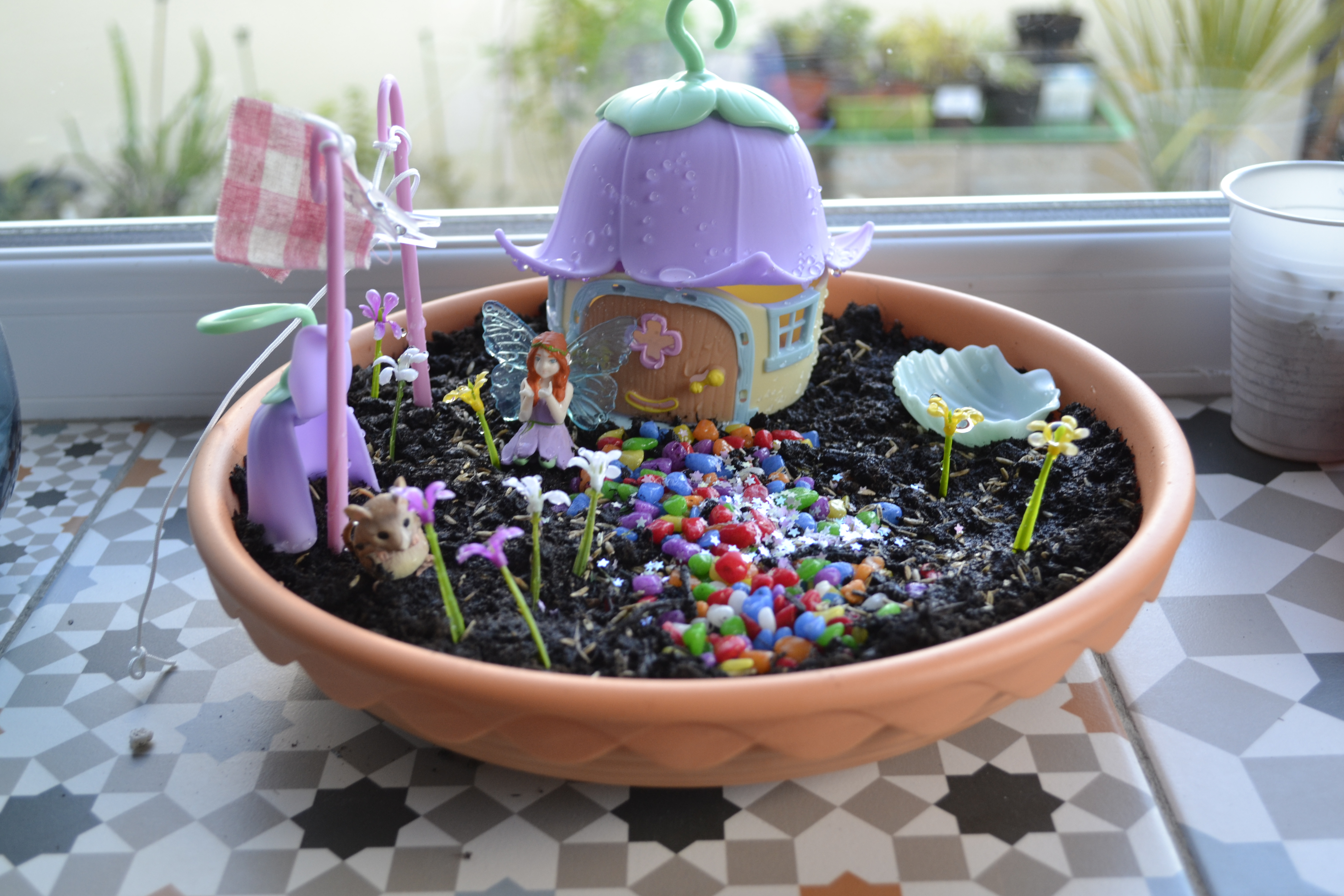 Hope you’ve enjoyed my six. Check the guide to six on Saturday if you fancy taking part. I have a wedding to go to so I’ll be catching up on other peoples sixes tomorrow probably. It’s also the start of 30 Days Wild so I’ll be looking to make time to connect with nature in some small way.