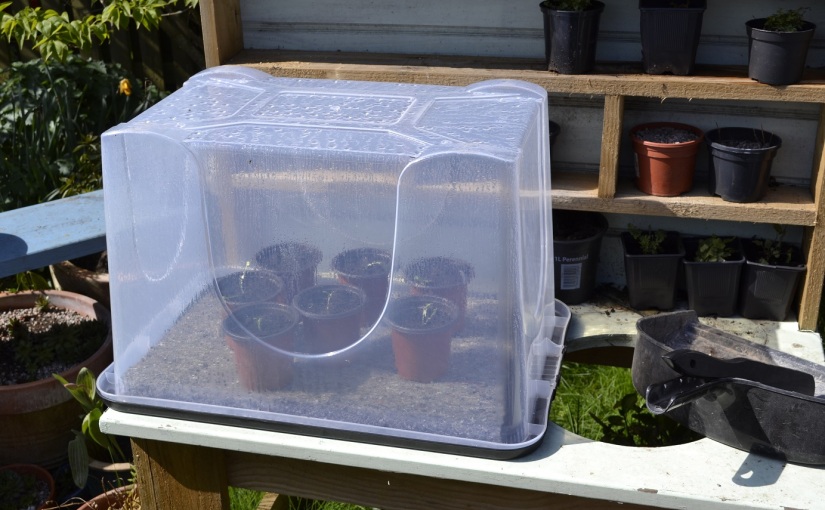 This year is my first year growing dahlias. Through looking at lots of stunning #dahlialove through six on Saturday blogs I decided this year I’d dip my toe in and try and grow some. I’ve got a few tubers hidden away for when the risk of frost has gone and I’m also trying the seed option as well. Dahlias are very tender to frosts so I’ve been trying to time this so they would be viable plants but not put out too early that they would shrivel in the cold.

Now there aren’t many dahlia options that come up reliably looking anything like what they claim to be but Sarah Raven’s Bishops children claim to be a good reliable option. They have dark foliage and then plum, orange or red flowers. While being quite ornamental and good for cut flowers they still have the RHS perfect for pollinators award satisfying my desire to provide for wildlife.

I’m lacking space to grow seeds this year with building work going on so I’m restricted to a few propagators in the spare room. These were sown in a medium sized propagator a few cm apart. At a week in the seeds were going strong with almost 100% germination success. I didn’t expect them to germinate or grow so fast.

We are now a couple of weeks into growing and they’ve been ready to prick out into individual pots. They’ve gone into 10cm pots I found in the shed. While I am cutting the single plastic use down no sense in not using these when they are already there. As already said I am lacking space in the house and as almost every seed germinated I have a lot of dahlia seedlings now. So I am going to trail different options for the seedlings.

I have put a handful back in the propagator they came out of and they have gone back in the spare room with a few grow lights for company. These are not on all the time just a few hours in the evening when I am around to supplement the light. The lid is coming on and off to give them the chance to have air circulation. There is cappilary matting at the bottom to give them a water source. 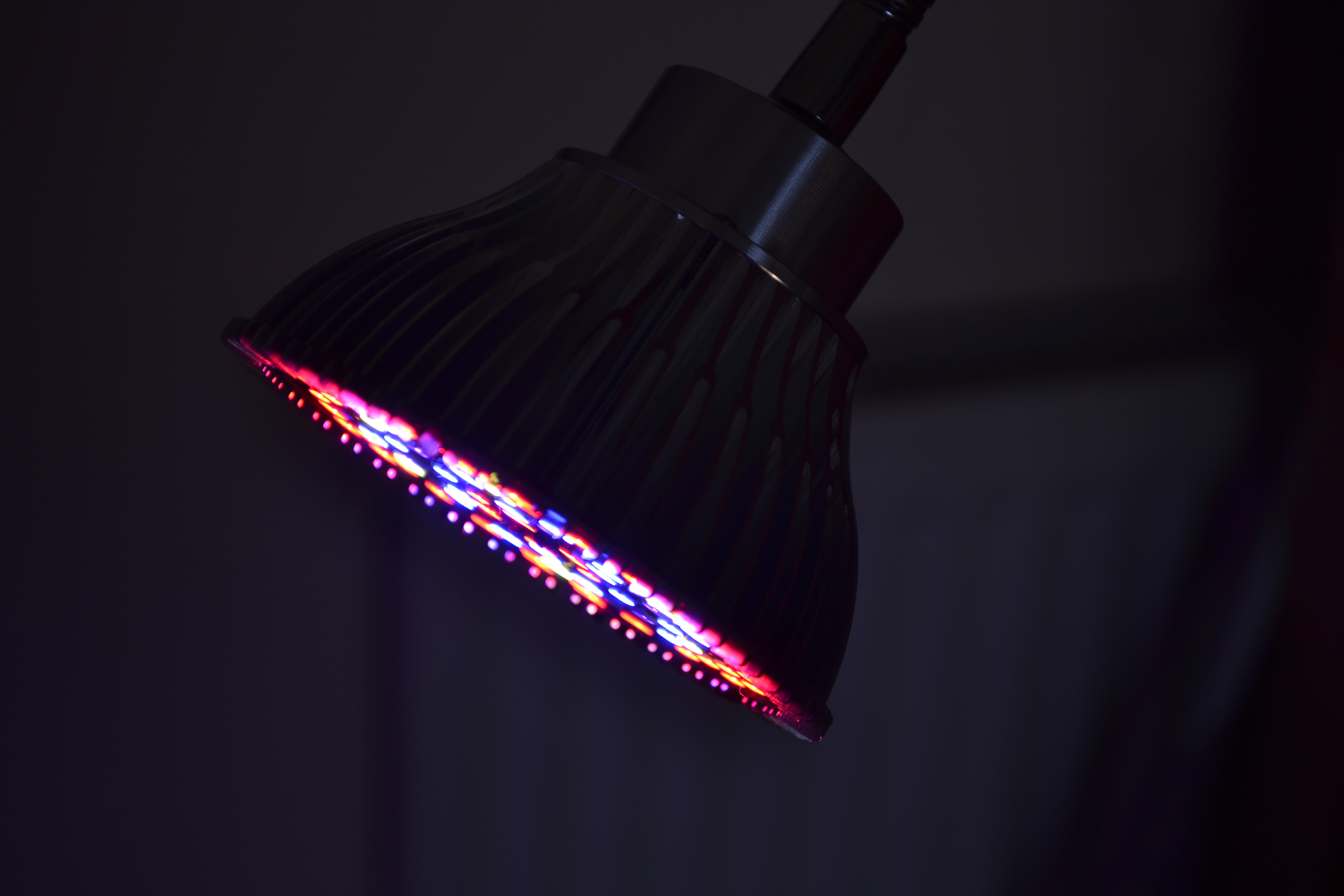 Then another handful are also sharing the spare room in a really useful box. It was suggested on Twitter that these could be used for propagators and as cold frames. This box is a bit small but it will do to get them established in the 10cm pots.

Then I have a much larger really useful box that is going in and out on the warmer days. As it gets warmer and the risk of frosts at night lowers I may risk leaving them out and start to harden them off to cold. 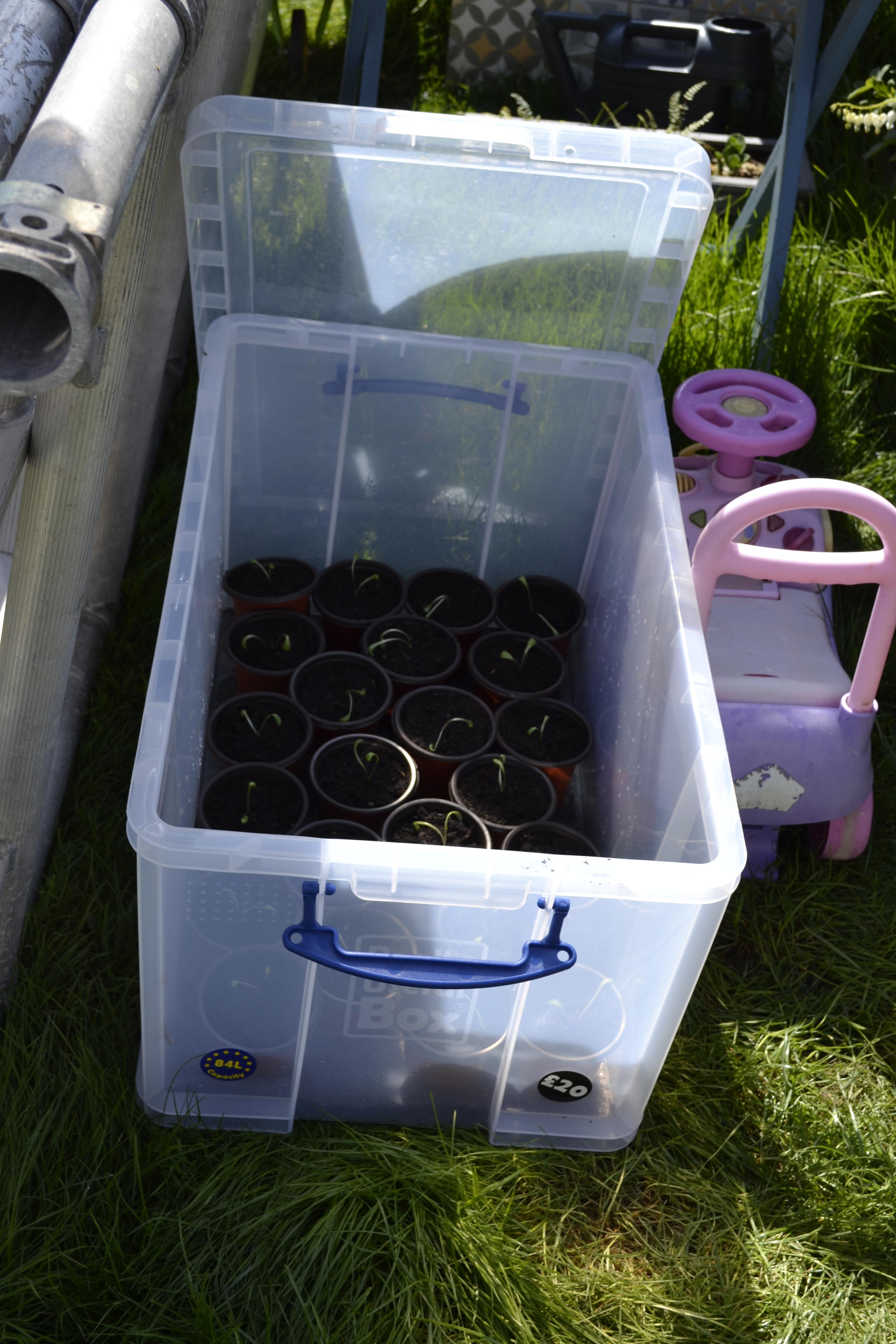 Then as there were still a couple I had left they have gone in a spare plastic box upside down. As this is an effort to move these are staying outside on top of Alice’s mud kitchen which is currently in the middle of the lawn while building work goes on. I imagine they have lower chances of survival but currently, the weather forecast is good for the next week so we’ll have to see.

So, watch this space to see how the really useful box cold frame works out. If even a handful of these make it to full size I’m going to have a good display of dahlias so fingers crossed. Any advice is greatly received. I’m going back to read Naomi Slade’s wonderful book for what to do next.

8 thoughts on “The Big Dahlia Experiment”