The illustrations in the books are clear and demonstrate exactly what you need to know. Many more modern styles don’t communicate their meaning in the way these books do. The houseplant expert is still regarded as the houseplant “bible” by many. Commissioning illustrations for books like this is costly. The illustrator either has to have a good knowledge of the subject or be directed in what is required. Sadly, I have got no further with discovering what work went into these books, but I have read a lot of stories on Hessayon. For one of the most successful garden writers of all time, there is little information about the man. He is, apparently, famously reclusive. I’ve managed to connect a few dots together from the internet. I can’t speak to the accuracy of some of the sources, but interesting nevertheless.

I was vaguely aware that he had made a fortune, but little beyond that. The story is engaging but tinted with sadness at what may have been lost with his retirement from writing.

David Gerald Hessayon was born on February 13th 1928 in Manchester. His Cypriot father, Jack, was a watchmaker. He lost his mother, Lena, when he was six. A fact he attributes to part of his success.

A kid says in his mind, “It’s a bloody unfair world and if I’m not smart, things could turn out even worse”. I think that’s true for me. I knew that things do happen, that it’s not a bed of roses and that you’re going to have to fight to survive. Life has got a cruel edge.

David describes the garden as just a little plot with four square beds, some lilies and a hydrangea. As his father’s health wasn’t too good he helped. It wasn’t so much for a love of gardening, but for a love of his father. Which, as a father I certainly know Alice comes to help me for the positive attention she gains in that time.

He attended Salford Grammar School. The school which amongst others has given us: Albert Finney, Peter Hook, Mike Leigh and David Quinn. He grew up helping look after his fathers small garden.

“I was blessed by being poor,” said Dr Hessayon, who prefers to be called Dave. “We had no money, but my father’s great love was this little garden in front of the house. I gardened from five years old to please him.

“Each plant was a green pet and I got to know everyone. It sounds mad, but having so few and not having money to start again, you appreciated each plant.”

David studied Botany and Chemistry at Leeds University, graduating in 1950. He worked as an assistant lecturer in Manchester and then gained his PhD in soil ecology at Manchester University. The PhD document was one of the reasons for becoming an author. 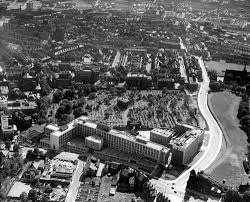 ‘It was green with gold letters on it…. I thought, “This is what I want to do”.

In 1949 he met his U.S. born future wife Joan. He went to work for her father in a Missouri newspaper. They married April 2nd 1951. Over the years they have had two daughters: Angelina and Jacqueline.

In 1955 he began work at Pan Brittanica Industries (PBI). Here he made agrochemicals. The company is best known for Baby Bio, a product familiar to almost all gardeners. In 1959 he bought out his first book, through PBI, “Be your own gardening expert”. The basic idea of these books was “easy to follow advice and information you can trust.”

“The real secret of my work is that people feel at ease with them. People say they are the kind of books which they could have written themselves, which is really the best compliment.” 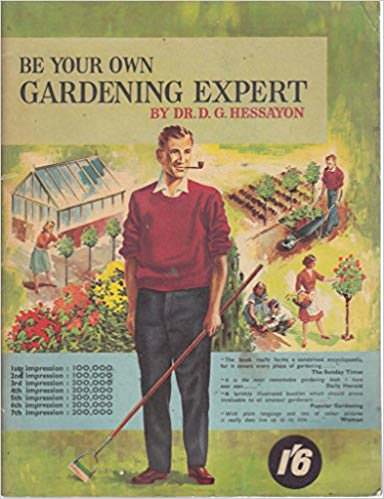 Over the years I believe 28 books have been published covering pretty much any aspect of gardening you could want information on. As already said, the houseplant expert is considered a definitive text. The books don’t suffer from fashions. There are mentions of rock gardens, gravel gardens, houseplants and other styles that have gone in and out of fashion. If there is something you fancy doing with your garden chances are Hessayon wrote about it. The presentation of the books is probably seen as quite old-fashioned. But, the illustrations and text give you exactly the information needed.

Some of the book push gardening techniques that are unpopular now. As an employee of an agrochemical company and later managing director (1964-91) and then chairman of the board (973-1993), the book often push weed killers that are no longer legal or considered good gardening practice. That said, you can still read and choose the techniques you want to use.

In 1993 a legal case was made against the company claiming the chemicals potentially caused cancer. It’s interesting looking back on the case in light of the recent Monsanto case. In this case, Monsanto is paying out despite no conclusive direct link being made to cancer. While I do garden without the use of weedkiller I’ve found the case interesting for its success and changing attitudes. The case against PBI, however, was dropped.

Many of the chemicals PBI produced have been banned by EU regulations. Hessayon has been outspoken about the regulations on these chemicals. Time will tell whether the agrochemical companies can create more products that conform to regulations. Or will we see more biological controls such as nematodes?

The irony of Hessayon writing the “green garden” in 2009 was commented on by many reviewers (thinking gardens review). In 2010 B&Q withdrew the expert series from their shelves in favour of Alan Titchmarsh’s how to garden series, despite significantly fewer sales. The Titchmarsh books covered the same subjects, had similar covers, but sold for £1 cheaper. I own a few and they are nice introductions to the subjects, but sadly don’t contain as much detail as Hessayon expert books. 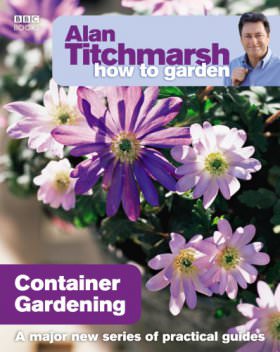 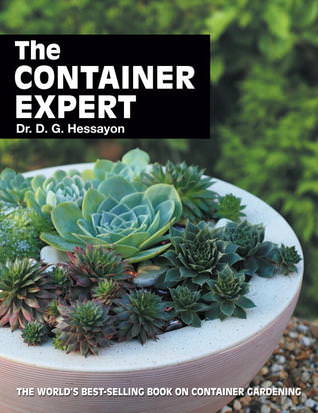 David has criticised some of the TV garden makeover shows for the damage they have done to gardening. Which I have to say shows like ground force presented a fairly unrealistic version of gardening. A step away from the unrealism of a Chelsea show garden. One of the few shows of that style I’ve enjoyed was Monty Don’s Big dreams, small space. But this revisited gardens over a good period, so the gardens had time to develop. It also gave us Jack Wallington’s wonderful fern wall.

“People were expected to make a garden in less than 48 hours ‘before your wife gets back’. But in that time you could do nothing. You couldn’t even get the soil ready for a lawn. So I didn’t think much of that. The gameshow makeover garden in 48 hours was not very amusing.”

In 2013 he announced his retirement from writing. He listed the internet as one of the reasons for the demise of the gardening book. If people want to look something up they no longer need a book, they can look it up online. Sad, but probably true. If you look at the best selling garden books they are largely either TV gardeners or coffee table books of the Instagram kind. The actual content is often lacking. Not always, I refer to Carol Klein’s book on propagation regularly and Monty’s down to earth had lots of useful information. But many releases are now style over content. Plants being placed in the wrong places to create a good photo. His statement that to sell a book it needs to be something you can’t find on google is probably true. But, it saddens me that new gardeners may miss out on book knowledge gained from books like the expert series. Advice online differs massively in quality (my own included). Whereas Hesssayon is a qualified expert. While there are many sources of excellent information online it feels like something has been lost.

“Now it’s look at my garden or look at other people’s gardens. To write a bestseller now you need to choose something you can’t look up on Google.” 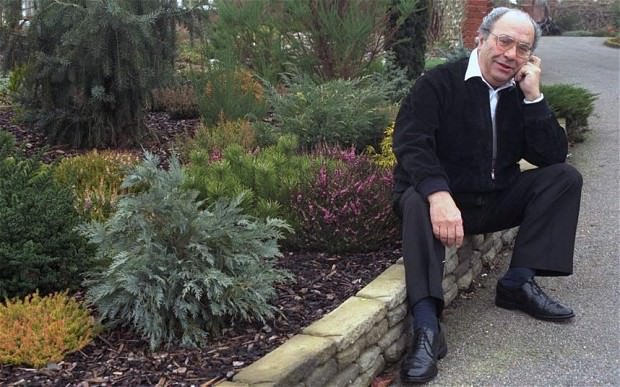 Davids contributions to gardening have been well recognised with the RHS Veitch memorial wedding in 1993. This is awarded to people who have made outstanding contributions to science and horticulture. Also in 1993, he received the National Book Awards lifetime achievement award. Then in 2007, he received an OBE.

So having spent an afternoon reading through the various online sources I still don’t feel like I’ve even scratched the surface of this gardening legend. I apologise for any inaccuracies. I can only go off the limited information on this reclusive man available online. If anyone has any further information I will happily correct any mistakes. For now, I would like to thank David for the information he shared with many of us over the years. For those of you who have never encountered them check your charity shops and used and new on Amazon. For those of you familiar with the books what’s your favourite?

I have one copy of the expert guide to houseplants. If you are interested check my Twitter and retweet and like the pinned post. Running until the end of Geo-Fleur’s Kickstarter campaign. It’s all or nothing with Kickstarter. The campaign is still off target, so please share. Even if you don’t want to pledge to Geo-Fleur, you have the chance to win a very useful book. 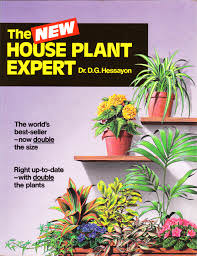 5 thoughts on “Dr Hessayon: the most famous writer nobody knows”