Autumn gardening, for me, mainly seems to be about preparing for the next year.

The Spring bulbs have gone in ready for next year. I had daffodils from last year. They were planted where the bench now sits. These have been redistributed around the border.

I’ve gone with a number of allium varieties. I like alliums for there structural interest and there generally popular with pollinators. Might well be allium overload. We’ll see next year.

Purple sensation says it grows as a cluster up to 80 cm.

Blue drumsticks are a little shorter at 60cm.

Then one giganteum up close to the patio. I’ve planted this with a few drumsticks surrounding. Hopefully have the tall gigantism towering with the blue drumsticks as a lower tier. While a bit pricier it will hopefully come back each year giving a good show.

I’m not a massive fan of tulips, but we saw some lovely varieties when we went to the open gardens. They’ll add a bit of colour before the Summer colours kick in. I’ve gone for tulip alectric; a pretty variety with pink and white petals. I should really wait for tulip planting, so they don’t rot in the ground, but I know I’ve got a lot on with work the next month. But I haven’t had major issues with bulbs rotting in the soil from last year, so hopefully be OK.

I’ve neglected the weeding for a few weeks while I’ve got other jobs done, so had a good upheaval. It wasn’t too bad though. Now I’ve got more plant coverage than last year there isn’t as much space for weeds to come up.

In the front the wildflowers that grew these year have died down. I had one patch of lavender growing by the door. I’ve added a second variety at the other end. The stripy leaved plant is a wild plant Lords and ladies. While not something I planted I like the leaves so it can stay for now. As time goes on if the lavender does alright I’ll fill the whole patch. Then it’ll be fairly low maintenance, needing little watering and as it fills the gaps shouldn’t need much weeding. While it may not look very much now it will hopefully develop into a lavender hedge giving lovely scent as you come in the house. 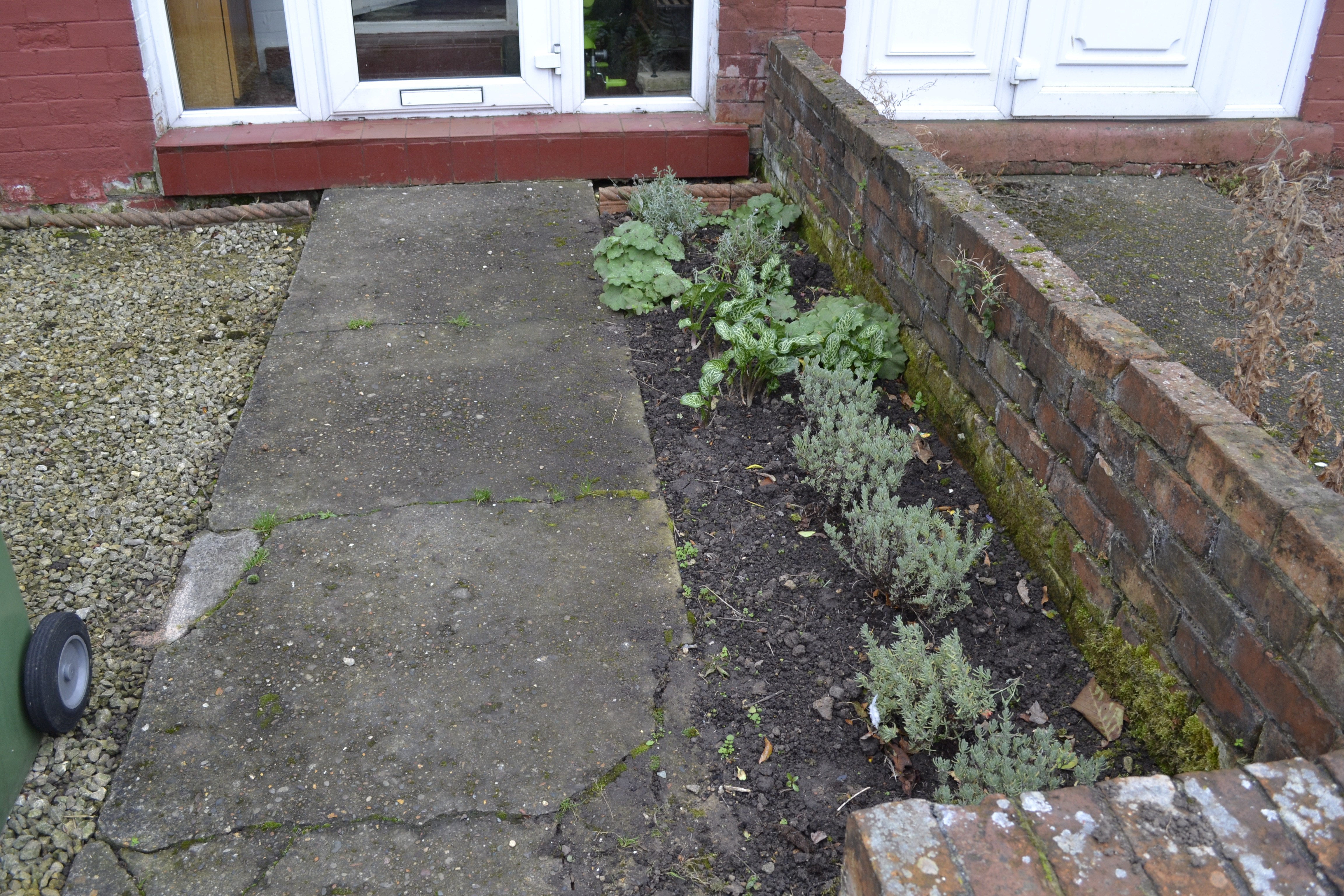 The lavender around the front and back garden has had its hair cut for this year stopping it getting too woody and encouraging a bit more growth next year. 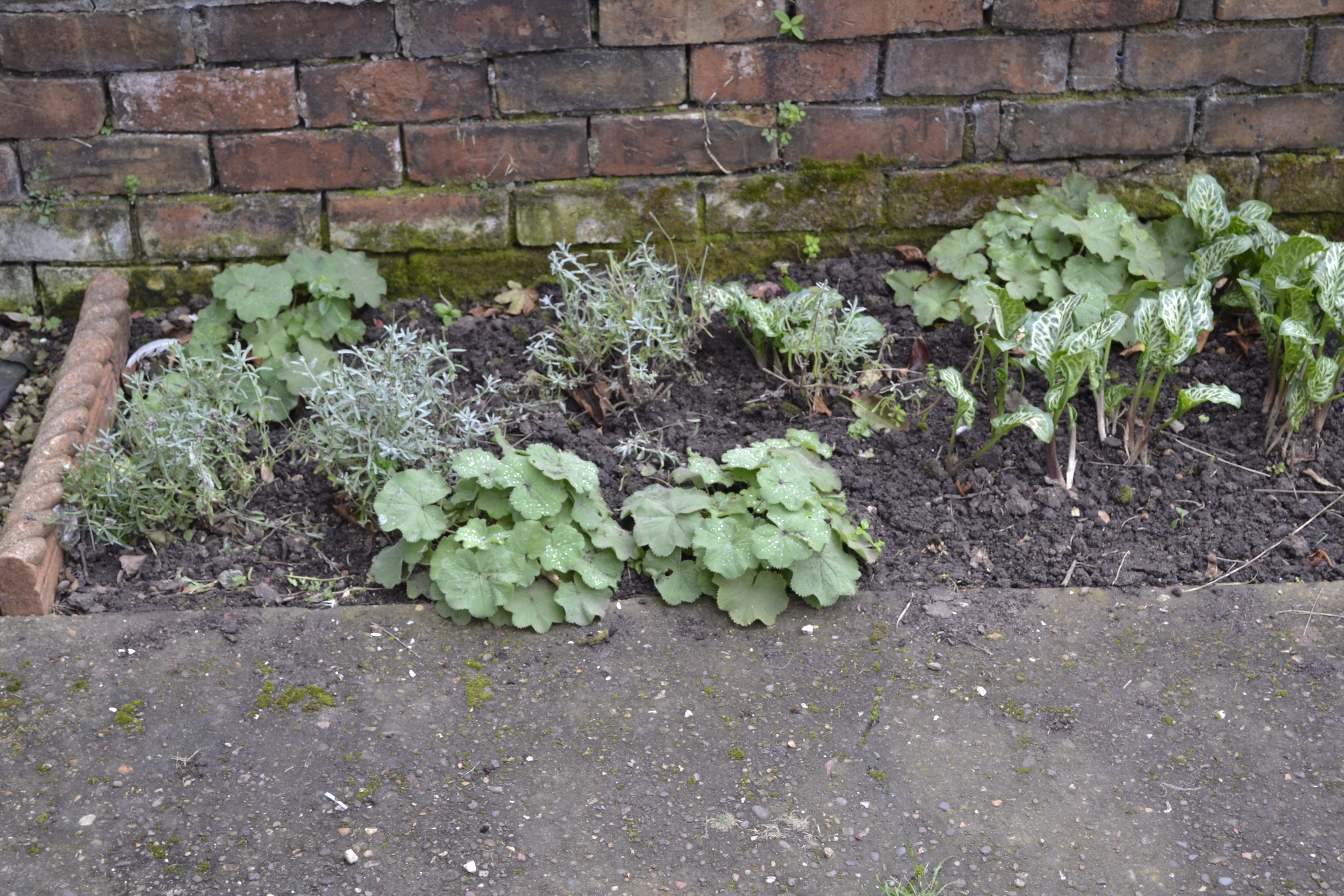 On the patio I’ve filled three pots with some new evergreens giving the patio some foliage and a bit more interest through the winter and into Spring. Two “little leaves” hebes that just have a small spread well suited to starting in a pot. 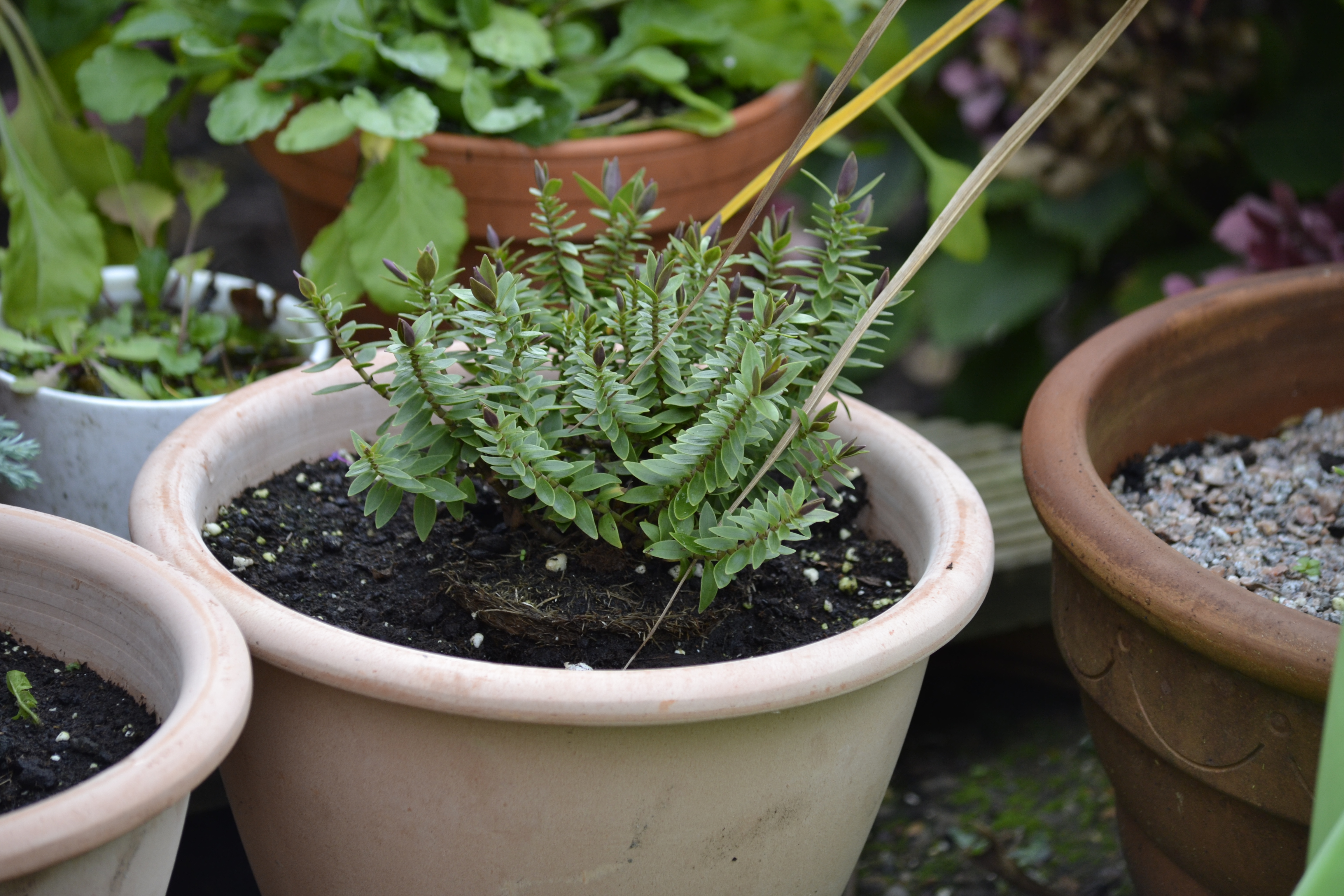 Then an annual shrub, chamaecynaris pisifera, known as “blue sky”. It will grow a little bigger than the hebes at 50cm. I like the blue tinge to the foliage. Should be good for retaining some seasonal interest through winter. 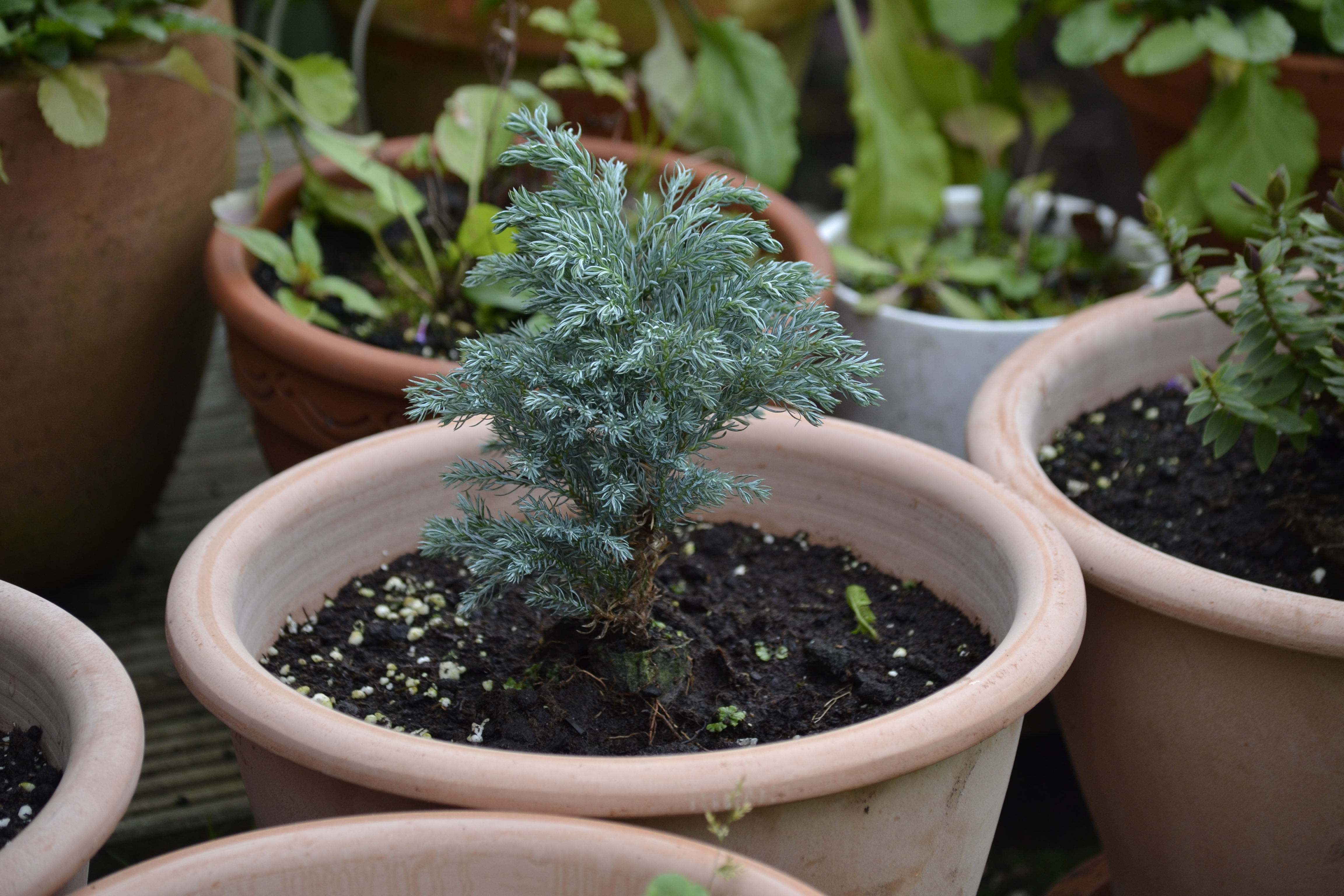 The birds are starting to return to the feeder. Things can be a bit quiet at the start of Autumn while there is plenty of food to be had naturally, but starting to see a bit more action on the feeders again. This robin was practising its poising ready for the Christmas cards. 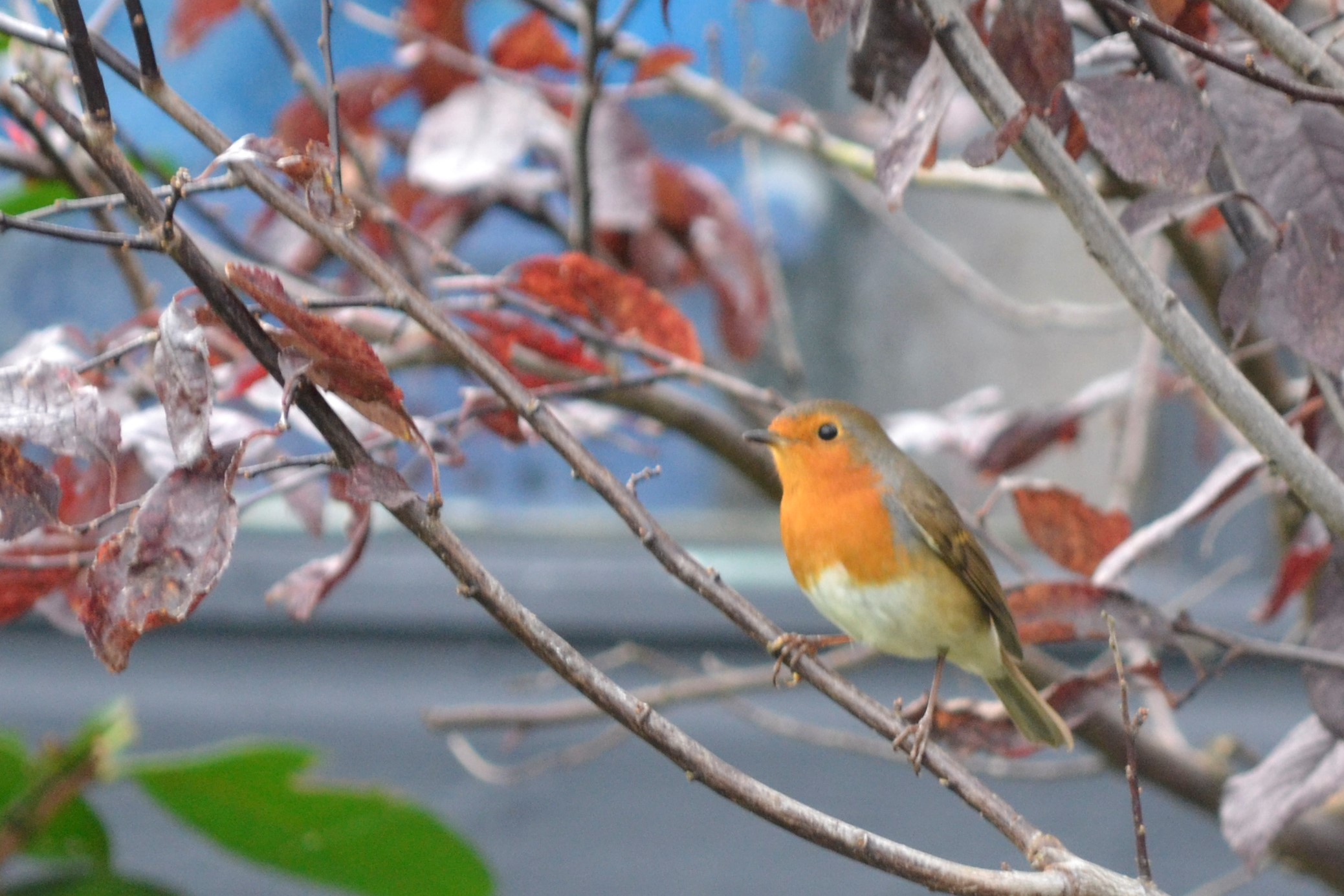 The roses are still flowering, although I reckon I might be looking at the last bunch for this year now. Once there done they’ll be needing a trim, then probably a bit further in early Spring. They had quite a harsh cut back this year and did better for it, alongside being fed better. 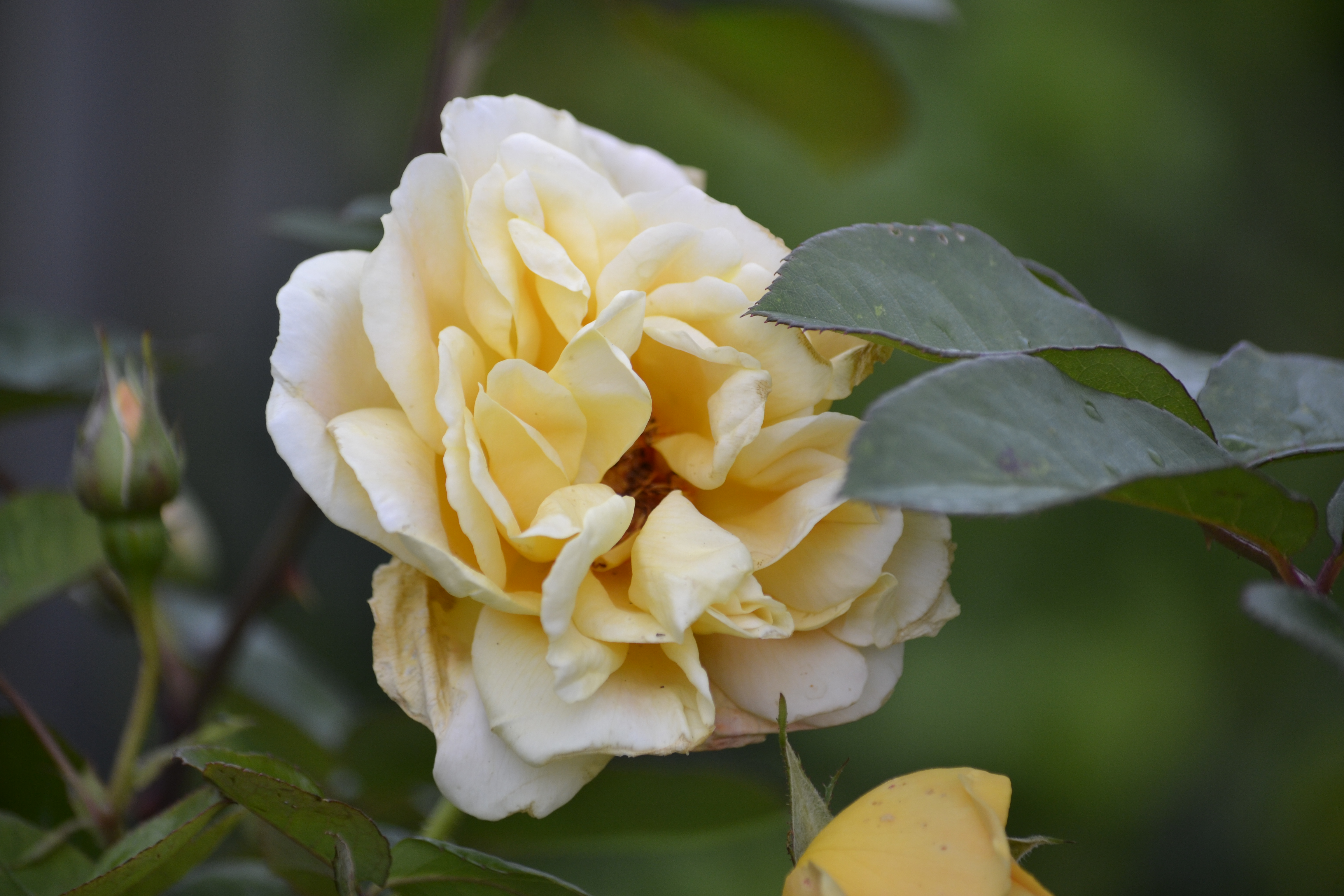 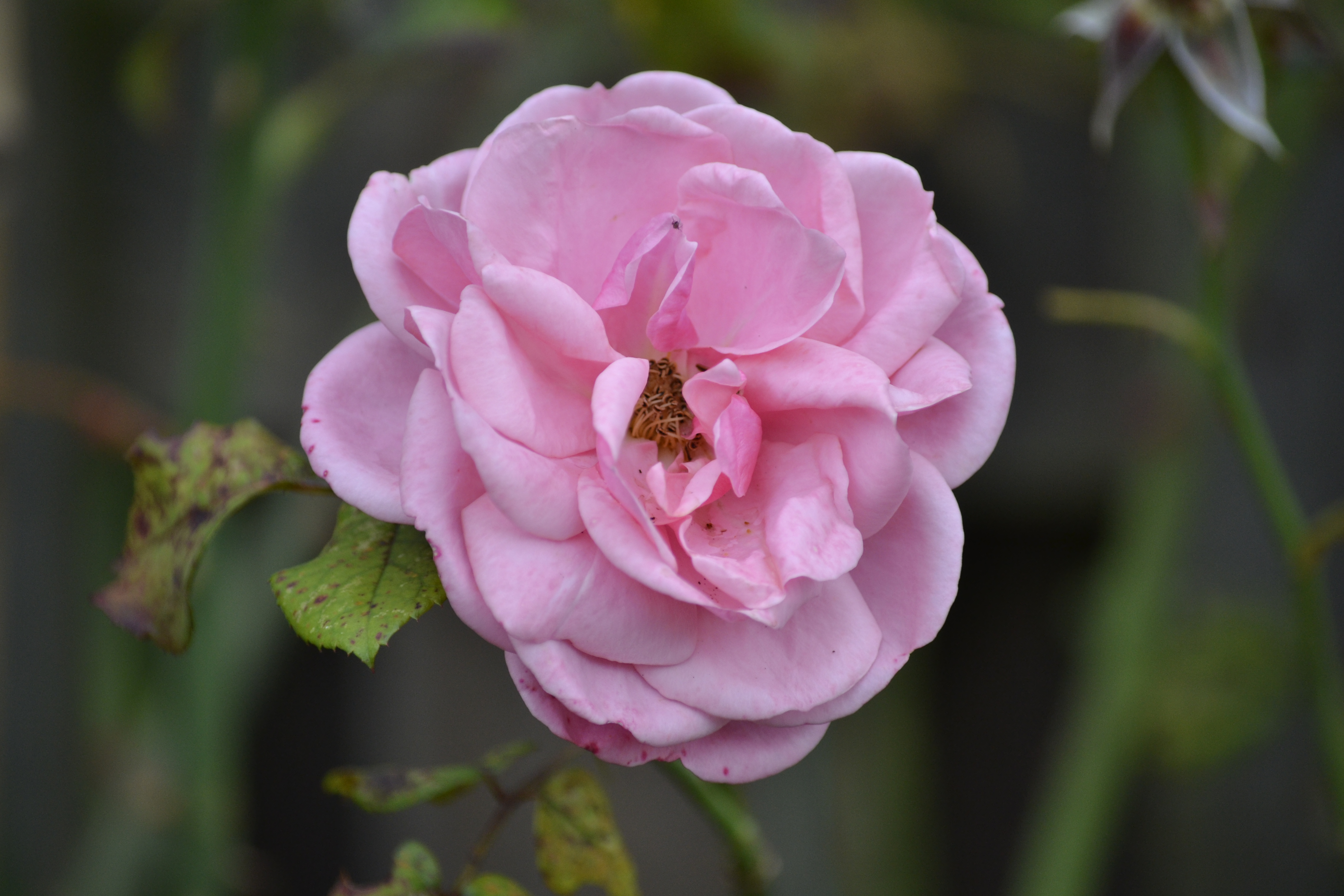 The leaves on the shrubs and trees are still hanging on in there. Once they drop I’ll be doing the last major Autumn job giving them a