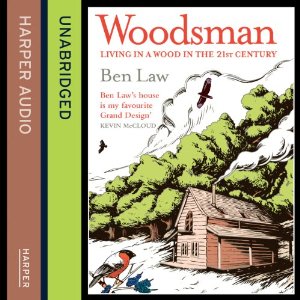 I finished listening to Woodsman (Unabridged) by Ben Law  narrated by Ben Law on my Audible app.

Ben Law became known to the world through channel 4’s TV show grand designs. For readers who don’t know the show a film crew follow someone trying to build their dream home. They usually have more money than sense. Horrifically complicated designs. And it seems to be pretty much compulsary to have a baby on the way. Its presented by a smug presenter who stands back reviling in the setbacks. Ben’s was very different from the vast majority in that it was low budget, largely built from local materials and was completed within a reasonable time frame, though his partner did have a baby on the way.

Ben lives within a wood. He built his house from materials within the wood and has developed a level of self sufficiency through woodland skills.

He details some of these such as foraging and coppicing. Ben outlines issues for the future. He sees the coming oil crisis as oil runs out could lead to a return to a more rural life complete with folk songs. He outlines a future horrific to people who love city life (and polo horses), but wonderful to fans of Tom and Barbara on the good life.

Ben Law narrates the audiobook himself. He isn’t a natural reading it and it is a bit wooden at times (pun intended), buts it’s nice hearing it in the authors voice. An enjoyable quick listen. Interesting to people who would like a more environmentaly friendly vision of the future.

One thought on “Woodsman (Unabridged)”