If Thursday was a butterfly day today is a beetles day.

J.B.S. Haldane, the evolutionary biologist was asked by a theologian what he could deduce about god from a lifetime of studying animals. His apocryphal response was that god must have an inordinate fondness for beetles. This alludes to the fact that there are more species of beetles than in any other order. With around 40,000 varieties they make up a massive amount of insect varieties. Their role as detrivores makes them vital in many ecosystems. Each year in school I like to put some time aside for looking at beetles as part of our animal topic, but this year I have got something special for the children.

I have set up a tank for a pair of giant rhino beetles for our new class pet. I received two larvae of Megasoma elephas elephas. These beetles can be found from Venezuela to Mexico and are one of the largest beetles in the world reaching up to 13cm in size. The substrate is all set and the larvae seem to be settling nicely into their new habitat. I hope the kids are as fascinated by them as I am. The variety of beetles and amazing range of colours makes them a stunning species to study. 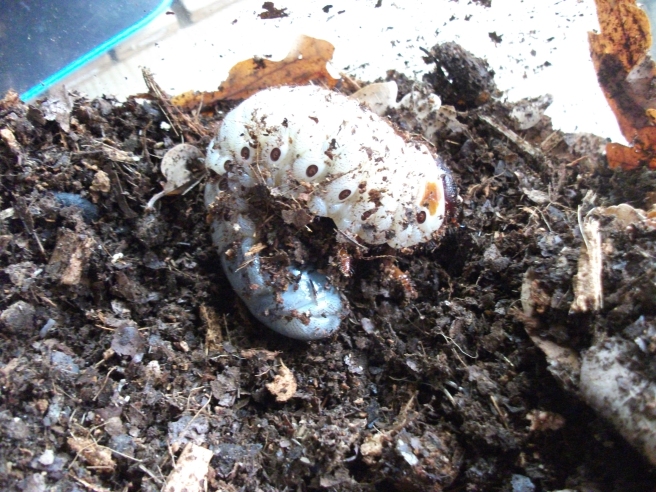 The larvae will take a number of months now to bulk out on the wood and leaves in the soil before they make their pupa to emerge as beetles.

The tendency in schools is to cover the more showy butterflies or frogs for looking at life cycles, but beetles are really easy to set up and their are some lovely stories and non-fiction books available.

This beautifully illustrated book shows off many beetles from around the world, discusses beetle facts and many different types of beetles.

Another beautiful non-fiction book looking at types of beetles and their life cycles.

The life cycle of a beetle

A quick read covering the life cycle of the beetle in easy to understand language.

Within the classroom mealworms are really easy to rear if you want to show children a lifecycle and if you get a good colony going you can feed the meal worms to the birds.

Not my video but covers the basics.

Stag beetles are the largest beetle in the UK, but are under threat. See detail here. Sadly not an insect we get up North, but see what you can do if your in the South here. Even if you’re not going to attract stag beetles a wood pile is a vital habitat for wildlife in the garden. I have a small wood pile in the garden where I also pile twigs and leafs to encourage wildlife. I started one with my class at school, but the caretaker told us we had to dismantle it as it was a fire risk if people broke onto the site they may set fire to it. Don’t get to have any fun. But I look forward to seeing how my rhino beetles develop.

6 thoughts on “Day 11-An inordinate fondness for beetles”